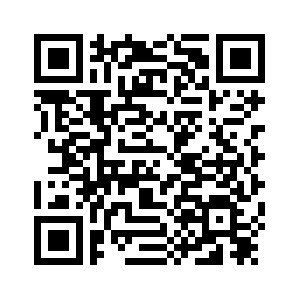 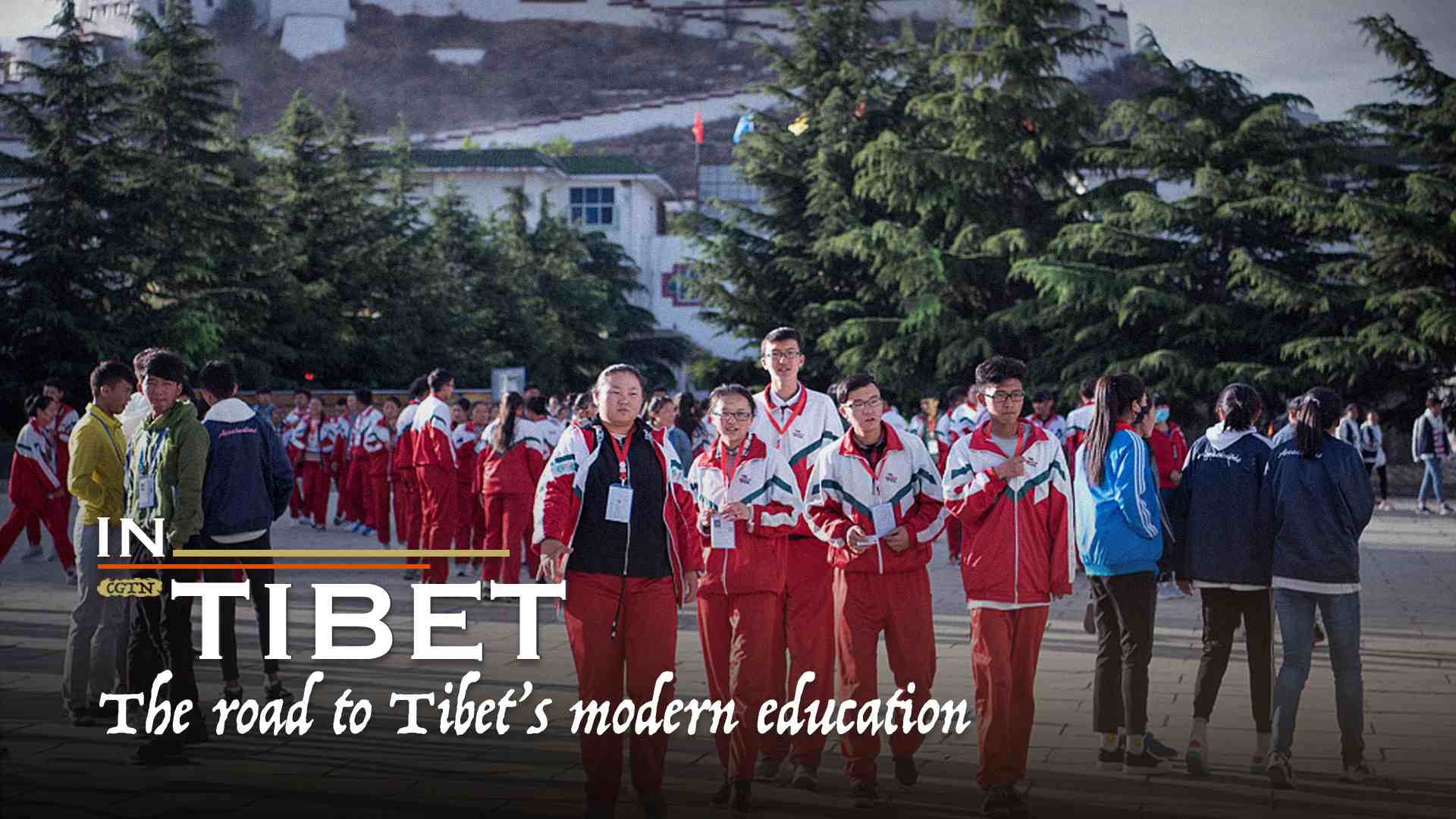 Tibet set up its first school providing modern education in March 1951.
Qamdo Primary School, built by the Chinese Central government, opened its doors to children that year, marking a huge step toward the establishment of a modern educational system on the "roof of the world."
In the early days, the school had only three classes and some 70 students and staff, but it was breaking ground on the plateau to offer opportunities to ordinary kids who never had the chance to attend school in old times.
Building public schools from scratch
Traditionally, Tibet's education was centered in and almost completely gripped by monasteries, except for a few old-style private schools. It had strong religious associations and was mainly designed for cultivating officials and monks.
Back in that time, monks were teachers, lections were textbooks and praying halls were classrooms. There was no organized educational system, nor an institution to take charge. The study of modern sciences, like math, physics and chemistry, was virtually nonexistent. 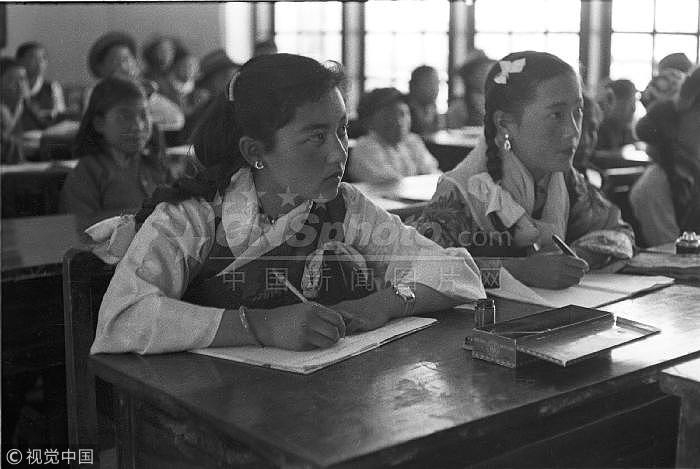 Two Tibetan girls listen in a classroom in Lhasa Primary School in August 1956. Established in August 1952, the school was among the first batch of new modern schools following Tibet's peaceful liberation in 1951./ VCG Photo

Two Tibetan girls listen in a classroom in Lhasa Primary School in August 1956. Established in August 1952, the school was among the first batch of new modern schools following Tibet's peaceful liberation in 1951./ VCG Photo

And those eligible to be "educated" were a small minority of privileged children from the families of wealthy merchants, feudal lords and nobles, occupying only five percent of Tibet's population at that time.
Things began to change following the peaceful liberation of Tibet in 1951, when the Central Government of the People's Republic of China and the local government of Tibet signed the 17-article Agreement, in which they agreed "school education of the Tibetan nationality shall be developed step by step."
Tibet's modern education was virtually built from scratch. From the very first Qamdo Primary School to a group of new type primary schools in Xigaze, Chagyab, Bome, Nyingchi, Ngari and Lhasa that emerged afterward, Tibet's modern education system gradually took shape.
Progress in figures
Tibet now boasts an all-level education system that covers kindergarten, elementary, higher education, vocational education, adult education and special education.
By the end of 2017, there were 2,200 schools across Tibet providing different levels of education to roughly 663 thousand students.
As the number of schools increased, so did enrollment. In 1951, when Tibetan children were significantly held back by a lack of education opportunities, the enrollment rate of school-age children was less than 2 percent.
According to a report by the local government, by the end of 2018, the gross student enrollment rate was 99.5 percent in primary school, 99.51 percent in middle school, 82.25 percent in senior high school and 39.18 percent in colleges and universities. 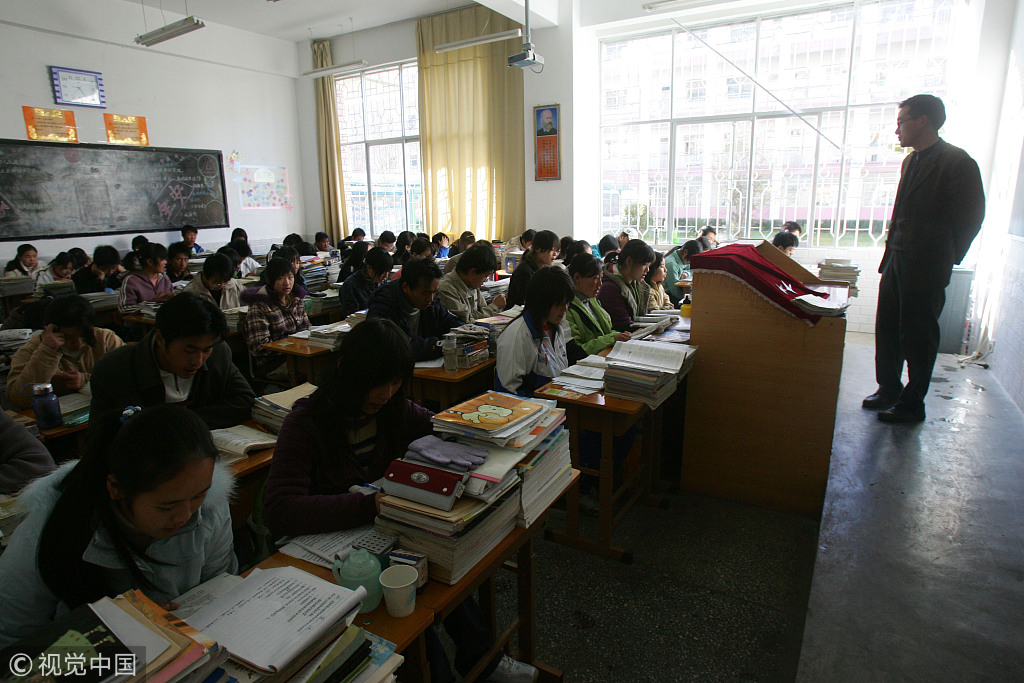 Senior high students study in a classroom in Nyingchi on October 26, 2006./ VCG Photo

Senior high students study in a classroom in Nyingchi on October 26, 2006./ VCG Photo

As a result, illiteracy among young adult Tibetans plummeted from 95 percent in 1951 to 0.52 percent in 2015, according to census data.
Behind that is unwavering support from the Central and regional government, notably in finance.
According to statistics, from 1951 to 2000, Tibet's educational finance investment totaled 6.12 billion yuan; from 2001 to 2010, the number grew more than 5.6 times, reaching 34.61 billion yuan. From 2011 to 2015, 63.39 billion yuan poured into the region's education sector – nearly double investment in less than half the time.
The growing amount of money is used to facilitate infrastructure, including educational buildings, dormitories and sports venues, as well as providing subsidies for Tibetan students and teachers.
Free education and welfare
Tibet's education boom not only comes from financial investment but also rich and targeted policies, of which "free education" is probably the most noticeable.
In 1985, the Central government launched a special preferential policy called the "Three Guarantees" to cover all tuition as well as food and board for students from Tibet's farming and pastoral families during their nine-year compulsory education period.
The policy later extended to 15 years, incorporating kindergarten and senior high school. Apart from that, it also offers financial subsidies to students from impoverished urban families and the standard has risen over 14 times by now. 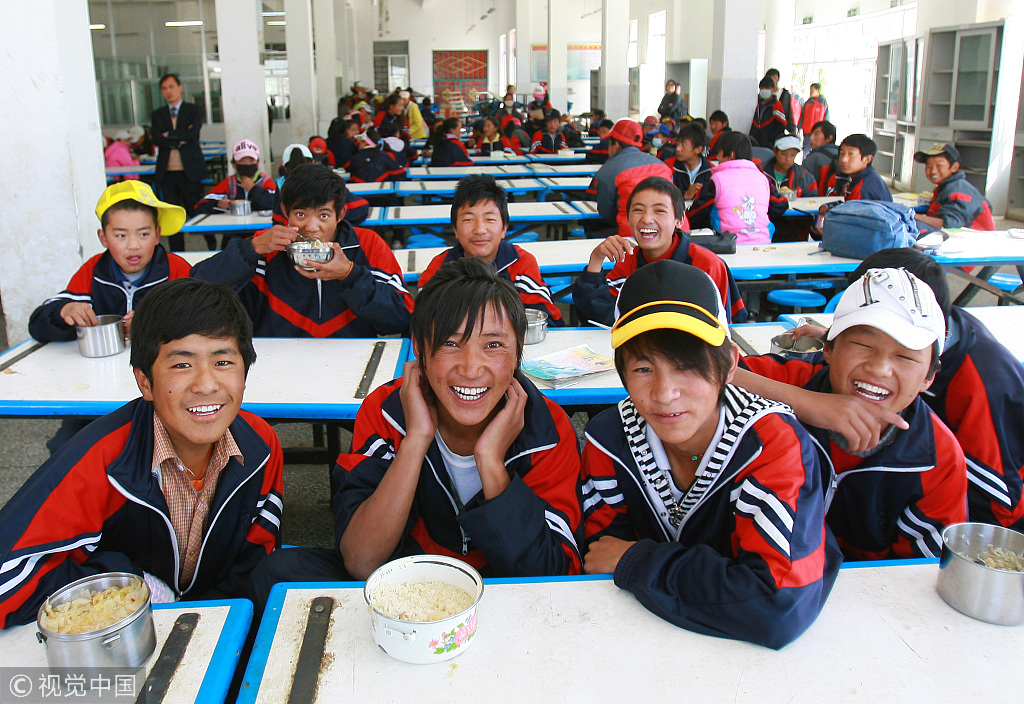 In 2012, Tibet became the first among all Chinese provinces, municipalities and autonomous regions to offer a 15-year education program to young Tibetans "free of charge," a striking move to promote fair education in the impoverished area.
It means students attending public schools in Tibet can enjoy exemption of a list of fees including tuition, accommodation, textbooks, meals, transportation and other miscellaneous costs, from preschool to senior high school. Parents who were once reluctant to send their children to school for fear of fees are now free from pressure.
But that's far from enough to close the gap between Tibet's educational level and those in inland China that have developed and thrived for years ahead.
To tackle this problem, two major programs have been rolled out: "Group Form" education aid and building Tibetan classes in major inland cities and provinces.
Education aid to remote Tibet is not new, but it was not until 2016 that Group Form education aid became a fixed and well-organized program supported by the Chinese government, which differs from scattered education aid.
Each year, a total of 800 inland teachers are divided into 20 groups and sent to 20 Tibetan primary and middle schools to boost local education, the majority of whom are math, physics and chemistry teachers. In exchange, 400 Tibetan teachers and school staff are sent to inland schools for training. 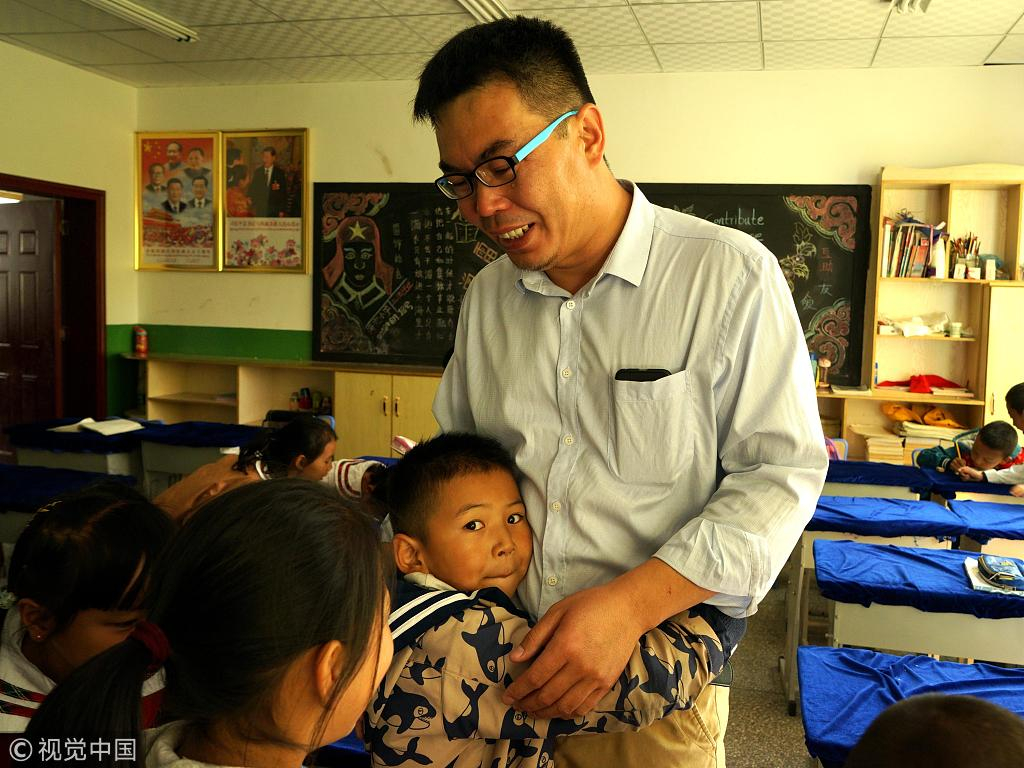 A Tibetan student holds He Xiaobo, a "Group Aid" teacher from Beijing on September 27, 2018, after he finishes his last class in Lhasa./VCG Photo

A Tibetan student holds He Xiaobo, a "Group Aid" teacher from Beijing on September 27, 2018, after he finishes his last class in Lhasa./VCG Photo 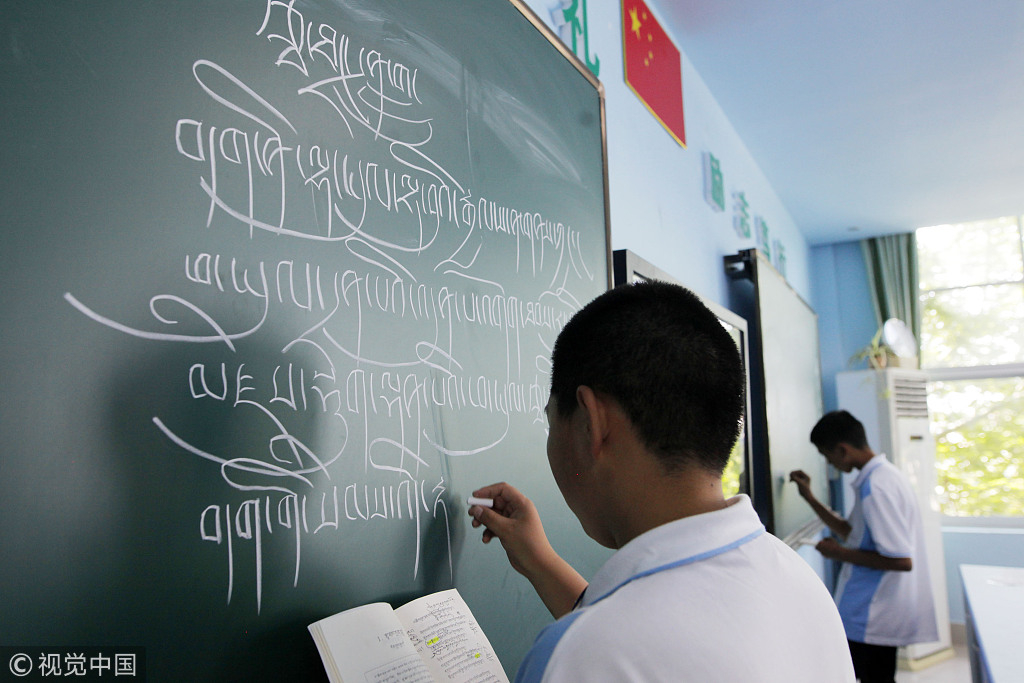 But it's not all about swapping teachers.
To help Tibet foster its own talents, in 1985, the first batch of 1,300 Tibetan primary graduates was selected to schools in cities like Beijing and Shanghai to continue their studies in places with better resources. According to statistics in 2015, a total of 22 cities and provinces had set up Tibetan schools or classes, rising from 16 in 1985.
Teaching in Tibetan
However, building up Tibet's modern education does not mean turning away on Tibet's distinct cultures and language.
Tibetan, as a language, boasts a history of 1,300 years and the Chinese Central government has put great emphasis on how to efficiently preserve and make it thrive, by establishing laws and teaching courses as Tibet steps into modern times.
According to a report on Tibet's development issued by China's central government in 2015, a bilingual teaching system with Tibetan as the principal language was widespread throughout the region.
It was carried out in primary schools in agricultural and pastoral areas and certain cities and towns in the region, with major courses all taught in Tibetan. In middle schools, classes are also taught in both languages and the Tibetan language is listed as an exam subject in college and secondary vocational school entrance exams, the report pointed out. 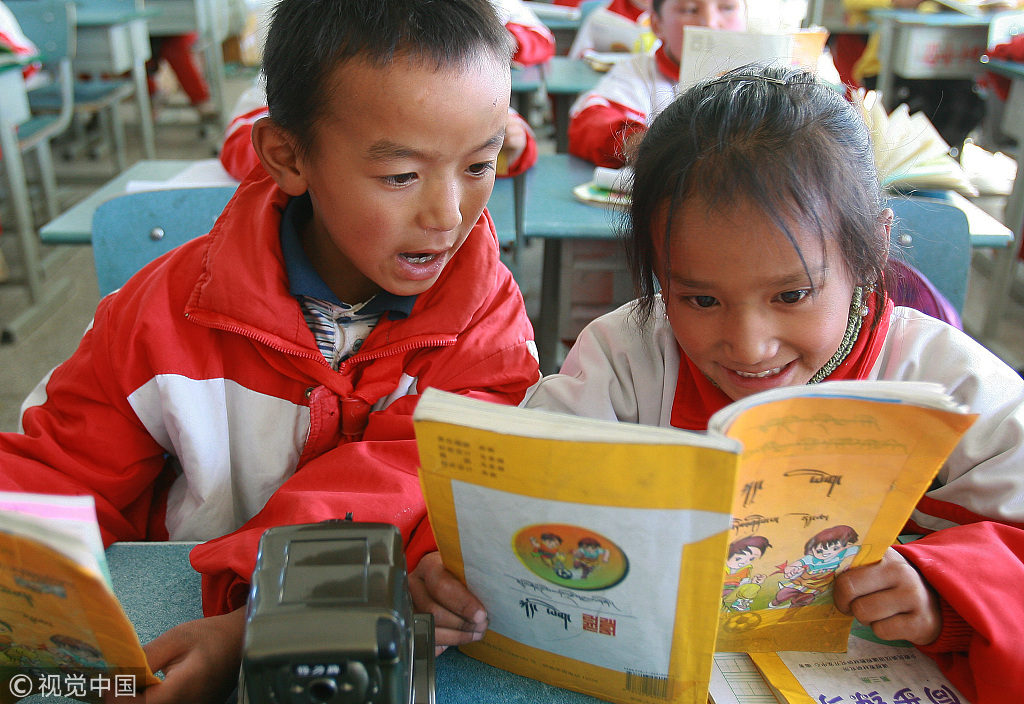 Students read a Tibetan textbook in a school in Shigatse on October 19, 2009./ VCG Photo

Students read a Tibetan textbook in a school in Shigatse on October 19, 2009./ VCG Photo

Tangible efforts were made to help young Tibetans carry forward their spoken and written heritage.
The numbers of bilingual teachers and Tibetan language teachers witnessed a steady growth from 23,085 and 3,700 in 2012 to 30,642 and 5,800 in 2015, respectively.
A specified textbook compilation center was built to translate and compile textbooks, courses, supplementary books and syllabuses to facilitate teaching in the Tibetan language.
By the end of 2012, statistics showed that 282,914 primary school students and 177,981 middle school students received bilingual education in Tibet, accounting for 96.88 percent and 90.63 percent of the total number, respectively.
Education is the key to all development in China and it is of particular importance when it comes to remote, rural and ethnic-minority areas like Tibet.
Looking beyond the numbers and figures, what matters the most is the ever-growing chance for Tibetan people to save themselves from a bleak future through education. As this year marks the 60th anniversary of democratic reforms in Tibet, we have looked back at the road Tibet embarked on regarding its education transformation. However, we also need to look ahead to the future.
Story by Bu Shi
Video editing by Geng Zhibin
Photo design by Gao Hongmei