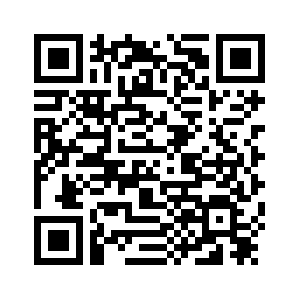 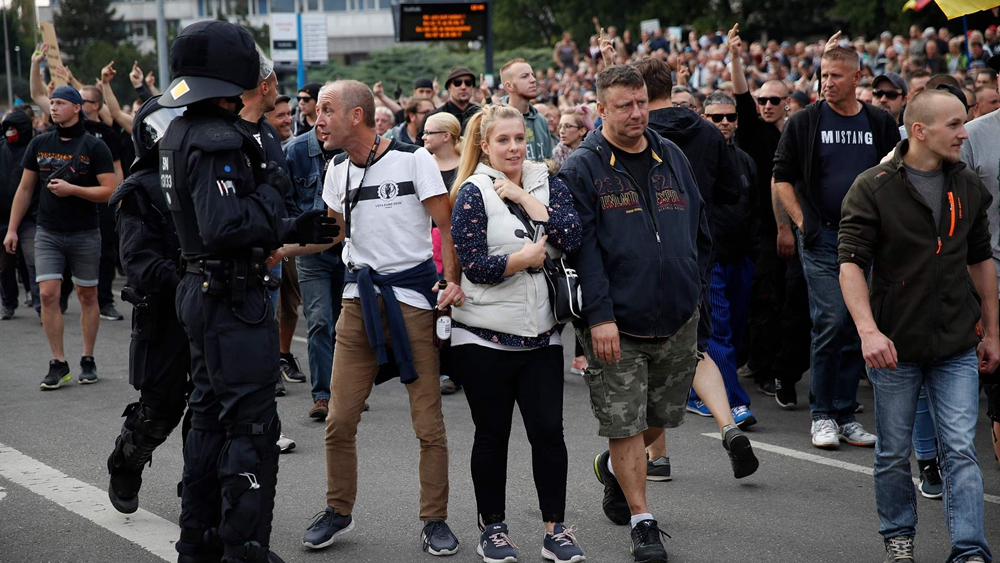 Far-right demonstrators clashed with leftist protesters in the eastern German city of Chemnitz on Monday after an Iraqi and a Syrian were arrested over a fatal stabbing that had triggered violent demonstrations.
Police said they brought in water cannons after fireworks were thrown from both sides, causing injuries.
State and local officials appealed for calm as thousands of people took to the streets and Chancellor Angela Merkel's spokesman said Germany would not tolerate "vigilante justice." 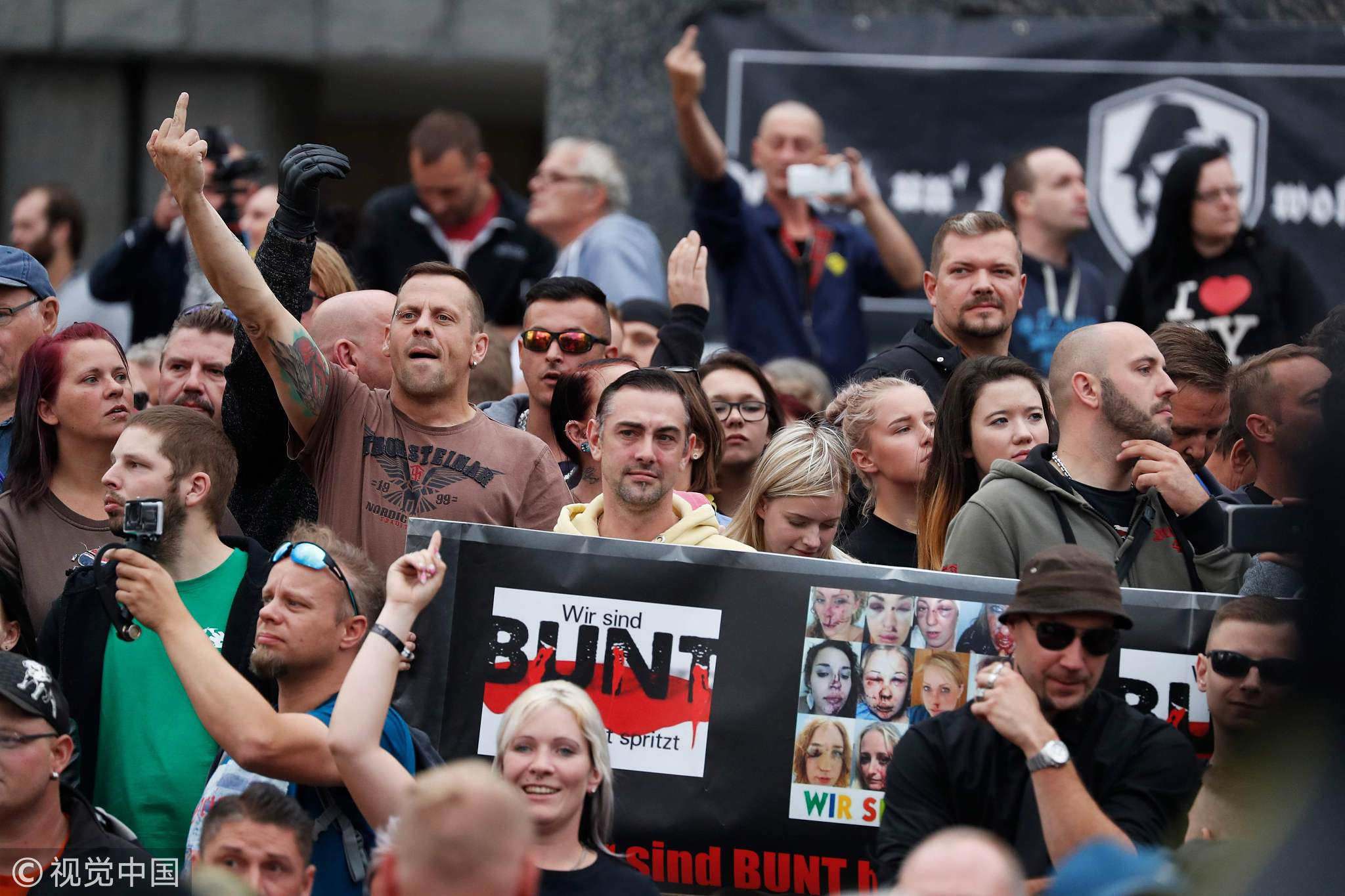 The unrest reflected a growing schism in German society after Merkel's government allowed about 1 million asylum seekers to enter the country in 2015, triggering a shift to the right in German politics.
Over a thousand leftist protesters massed near a giant statue of Karl Marx in Chemnitz on Monday evening to protest attacks on foreigners that occurred during an impromptu demonstration on Sunday after reports spread on social media about the stabbing of a 35-year-old German man.
"The scenes of people going after those who look like foreigners scare us. We want to show that Chemnitz has another side that is cosmopolitan and opposes xenophobia," Tim Detzner, the head of the radical Left party in Chemnitz, told the rally.
Nearly the same number of demonstrators waving German and Bavarian flags gathered nearby, some breaking through police barriers aimed at keeping the two sides apart. Many chanted "We are the people," a slogan used by far-right supporters.
The police in Saxony, the eastern state where Chemnitz lies, said on Twitter at around 1930 GMT that the demonstration had ended and they were accompanying participants to the train station. 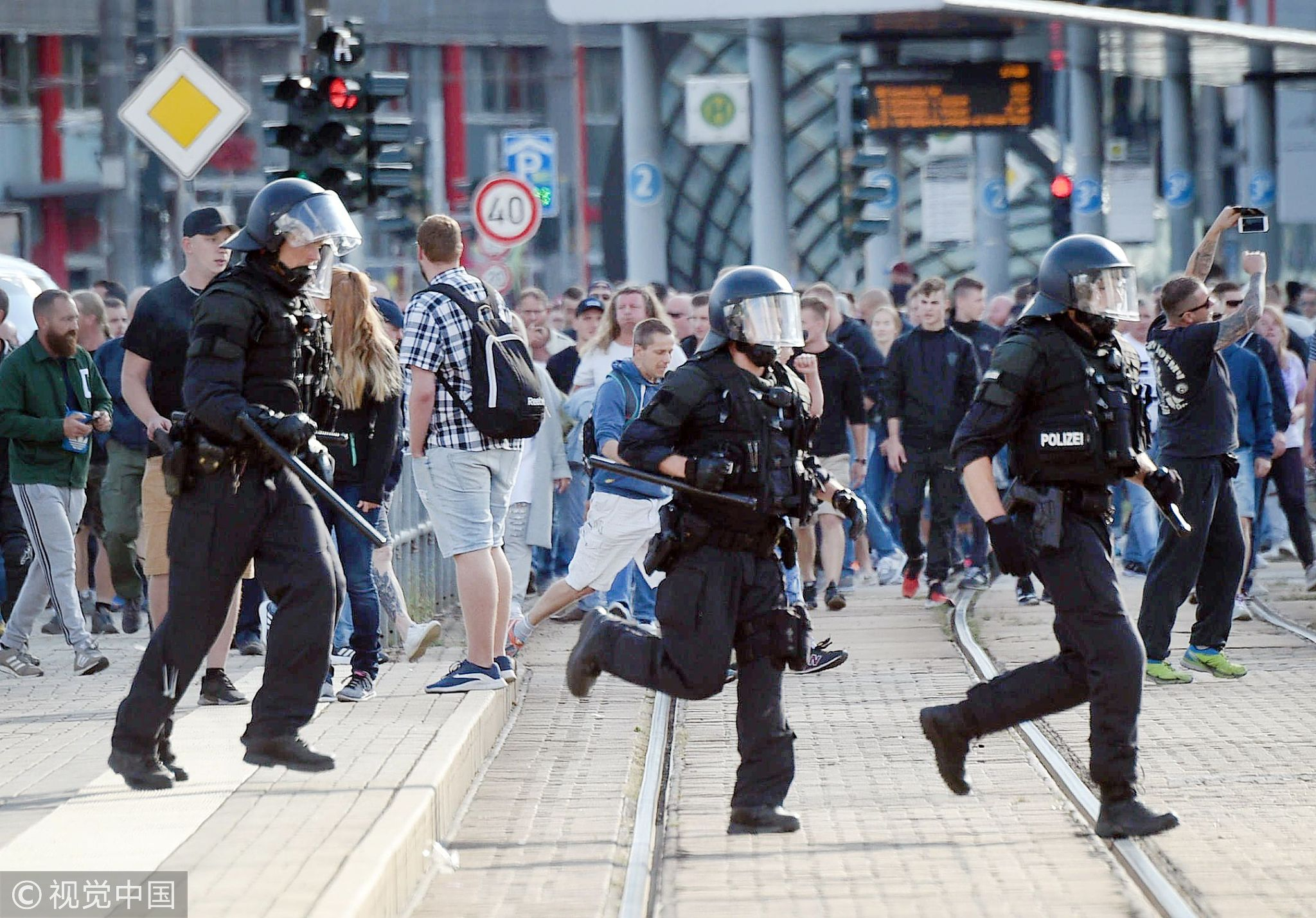 Tensions were running high after some 800 demonstrators - including about 50 that police described as ready to commit violence - had taken to the streets on Sunday after the stabbing, which police said occurred after a row.
Local prosecutors said they had arrested two suspects, a 22-year-old Syrian man, and a 21-year-old Iraqi man.
Far right 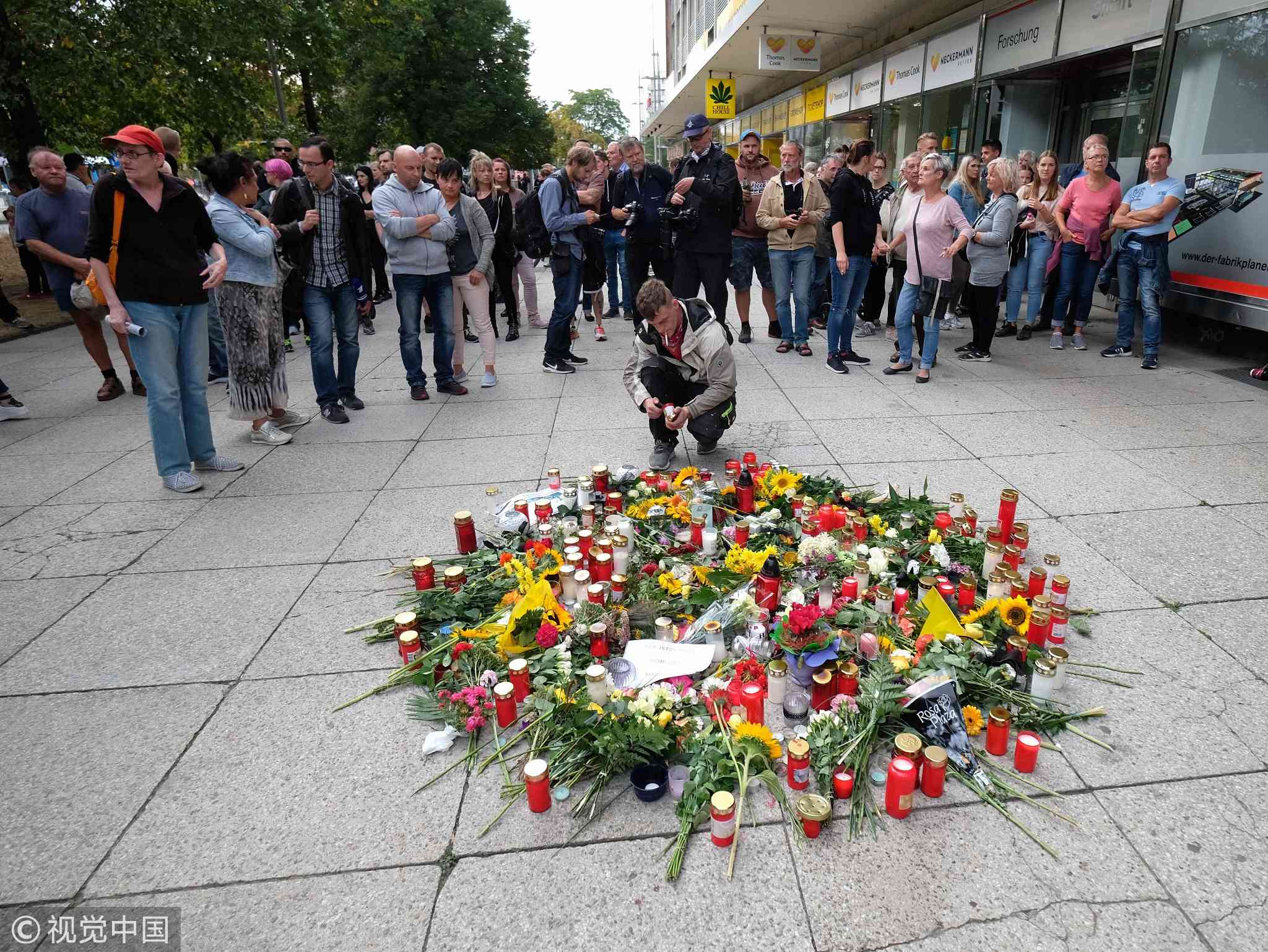 Flowers and candles are left at the site on August 27, 2018, in Chemnitz, eastern Germany. /VCG Photo

Flowers and candles are left at the site on August 27, 2018, in Chemnitz, eastern Germany. /VCG Photo

Television news channels broadcast amateur footage of skinheads chasing a man through the streets at Sunday's protest. Police said they were still investigating reports of injury filed by Syrian, Afghan and Bulgarian people, and at least four demonstrators had been charged.
"We don't tolerate such unlawful assemblies and the hounding of people who look different or have different origins, and attempts to spread hatred on the streets," Merkel's spokesman Steffen Seibert told a regular news briefing.
"That has no place in our cities and we, as the German government, condemn it in the strongest terms," he said. "Our basic message for Chemnitz and beyond is that there is no place in Germany for vigilante justice, for groups that want to spread hatred on the streets, for intolerance and for extremism." 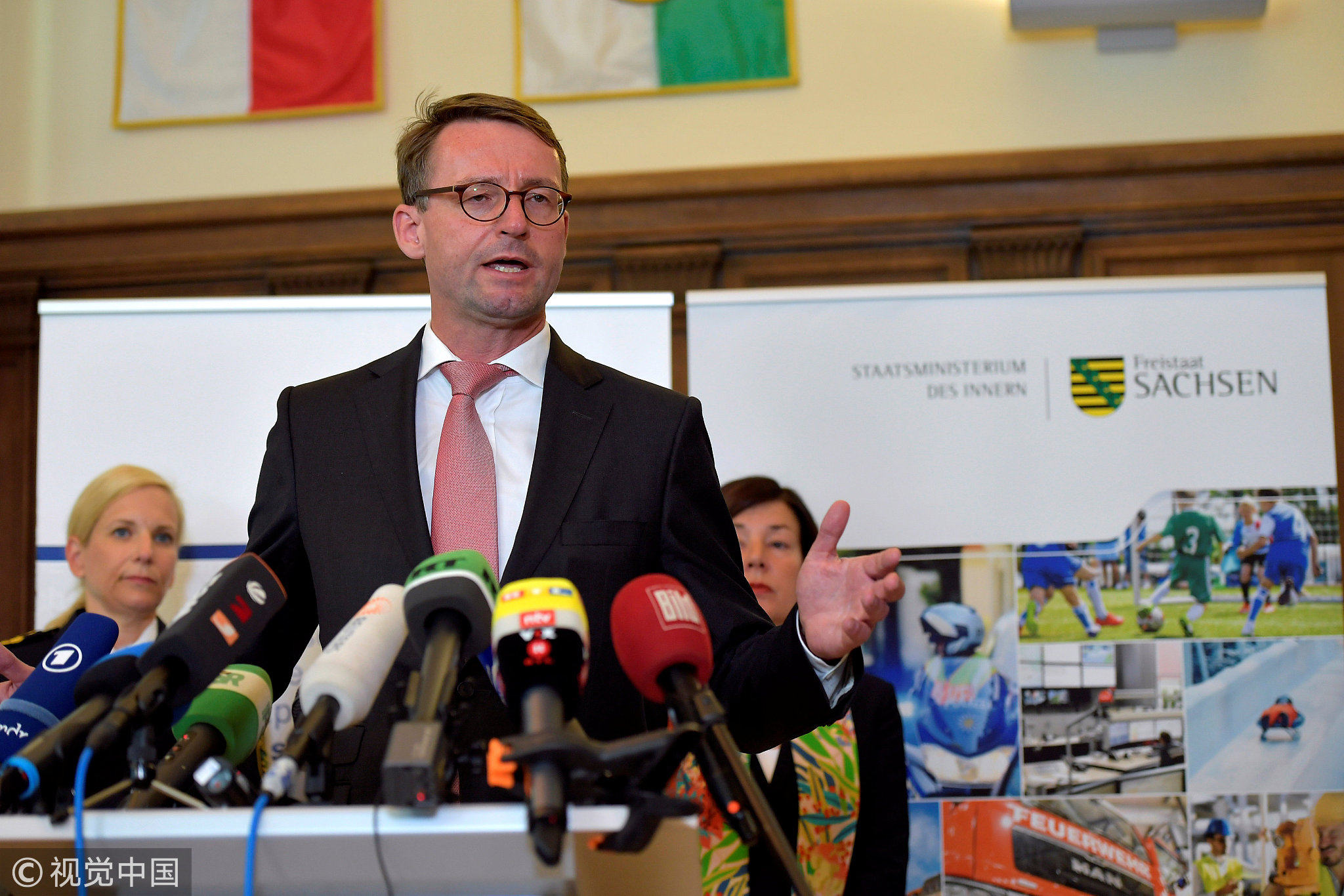 Roland Woeller, interior minister of the state of Saxony, which includes Chemnitz, said authorities would not allow "anarchists" to run rampant. He warned against "misinformation and lies" circulating in social media.
The arrival of huge numbers of migrants from the Middle East three years ago has fueled support for far-right groups such as PEGIDA and the Alternative for Germany (AfD), now the main opposition party in parliament.
Tweeting about Sunday's incident, AfD politician Markus Frohnmaier said: "If the state is no longer to protect citizens then people take to the streets and protect themselves. It's as simple as that!"
Martina Renner, a Left party lawmaker, accused the far-right of trying to exploit a murder for its own political ends.
"A terrible murder, the background to which is still unclear, is being instrumentalized in the most repugnant way for racist riots in Chemnitz," she tweeted.
‍The violence in Chemnitz is likely to put further pressure on Merkel's conservatives, who last week faced accusations of ignoring the rise of far-right groups in Saxony.
Source(s): Reuters