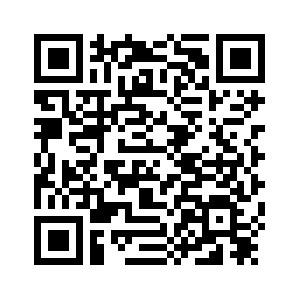 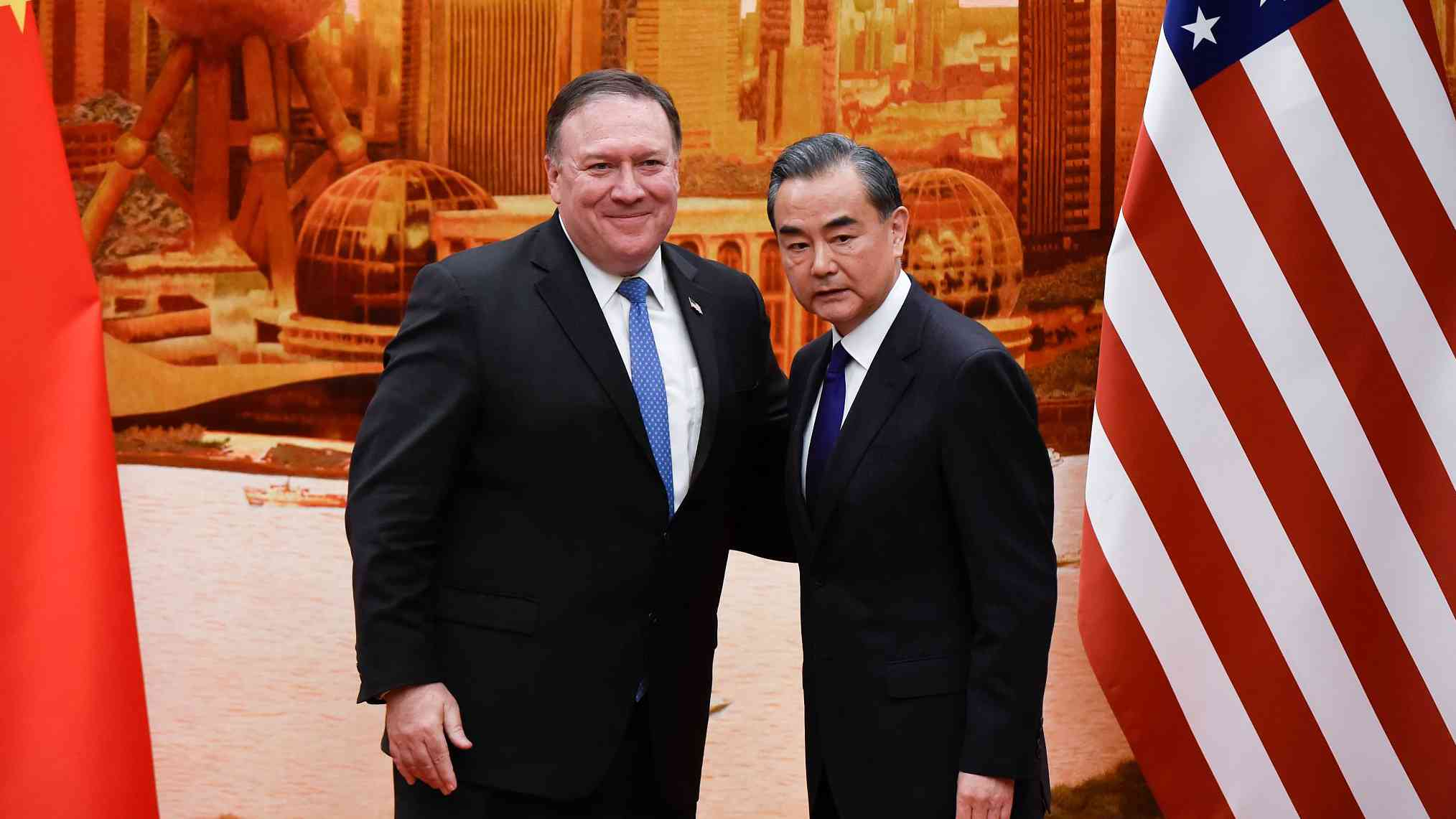 Editor's note: Jin Canrong is the Vice Dean of the School of International Studies at Renmin University in China and Jin Junda holds a Ph.D. in Political Science and International Relations at Boston University, U.S. The article reflects the authors' opinion, and not necessarily the views of CGTN.
On January 1, 1979, China and the United States formally established diplomatic relations. Today, with China's rising economic prowess, China-U.S. relations seem to have come to a crossroads.
China-U.S. relations in the Trump era are plagued by trade frictions. However, it seems that not only Trump is concerned about China's development, U.S. elites, in general, are increasingly wary of China. 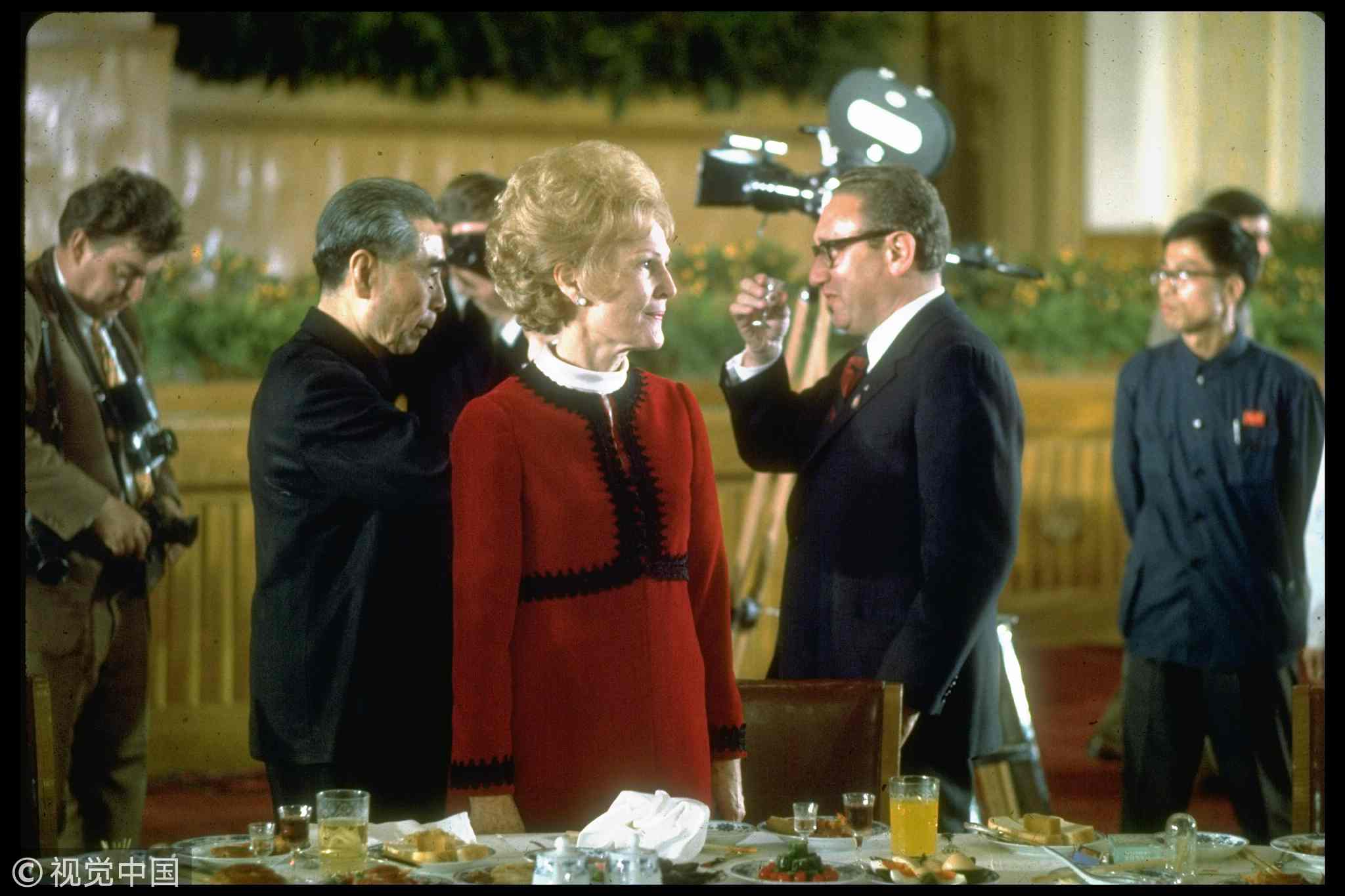 Chinese and U.S. elites' views of the two countries

It should be noted that although China's economy has made great progress, the mainstream elites in China still hold a cool-headed and rational view of China's national realities. Most Chinese elites still regard China as “the largest developing country.” President Xi Jinping's speech at the 19th CPC National Congress affirmed China's achievements in recent years but also acknowledged China's reality as a developing country.
The frictions between China and the United States are rooted in their differences over China's development path. The Chinese elites and people generally believe that China should follow a development path compatible with China's national realities.
In the first 30 years of New China and the following 40 years of reform and opening-up, the country has figured out a development path, the distinctive feature of which is socialism with Chinese characteristics. China does not believe it means China will challenge the U.S., and the elites in China do not seek to dethrone the U.S. as the global leader.
However, in the view of American elites, socialism with Chinese characteristics cannot meet their expectations for the “democratization” and “political pluralism.” And the fact that China is growing faster than they expected has caused them concerns. Moreover, as China, with its growing national strength, begins to assume more and more international responsibilities, it is seen as becoming pushy and even aggressive in its foreign policy. 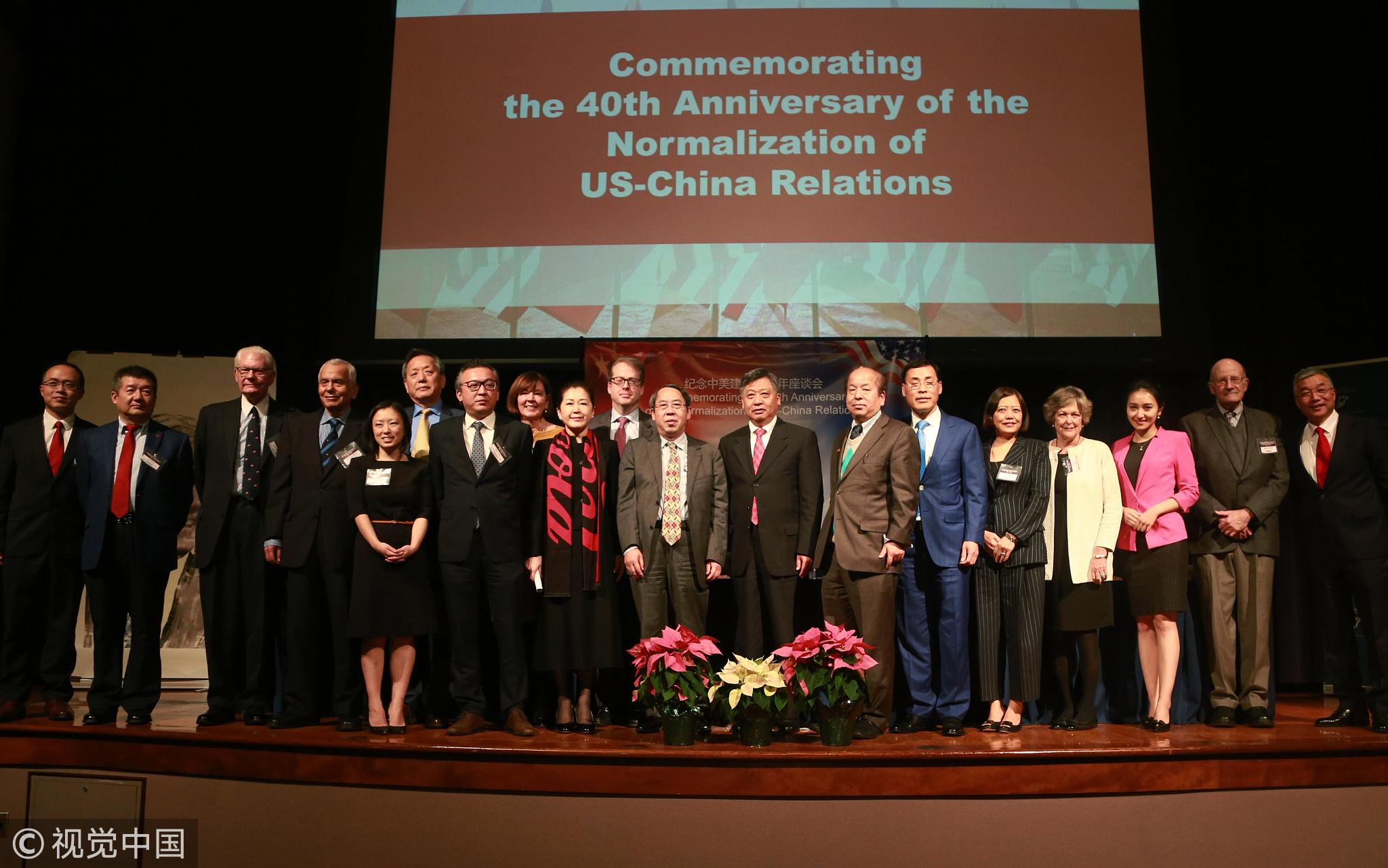 An event is held in Atlanta, U.S. commemorating the 40th anniversary of the normalization of the U.S.-China relations on December 15, 2018. /VCG Photo

An event is held in Atlanta, U.S. commemorating the 40th anniversary of the normalization of the U.S.-China relations on December 15, 2018. /VCG Photo

This mentality has led to a change in the strategic positioning of the U.S.'s China policy. In the past, the U.S. defined China as a “flawed partner,” but today it defines China and Russia as major strategic rivals. With Russia struggling in a resource trap, China may become the only rival of the United States in the long run.
This change in strategy is the result of the consensus between the left-wing and right-wing parties in America. Although the current trade friction seems to be caused by the Trump administration's policies, the fundamental change in the U.S. position towards China is not because of Trump, and will be here to stay in both Democratic and Republican parties for a long time after Trump.
This structural change has resulted in less cooperation and more competition in China-U.S. relations.  Although China-U.S. relations are still marked by “the coexistence of competition and cooperation,” the balance of completion and cooperation have been broken, giving rise to a dangerous situation characterized by more competition than cooperation.

How should China and U.S. manage their bilateral relations?

The Chinese leadership believes that good China-U.S. relations are conducive to China's development and attaches great importance to having such relations with the U.S.
However, improving bilateral relations requires the both sides' joint efforts. The U.S. should see China's development as an opportunity. China needs to deepen reform and further open up its market. 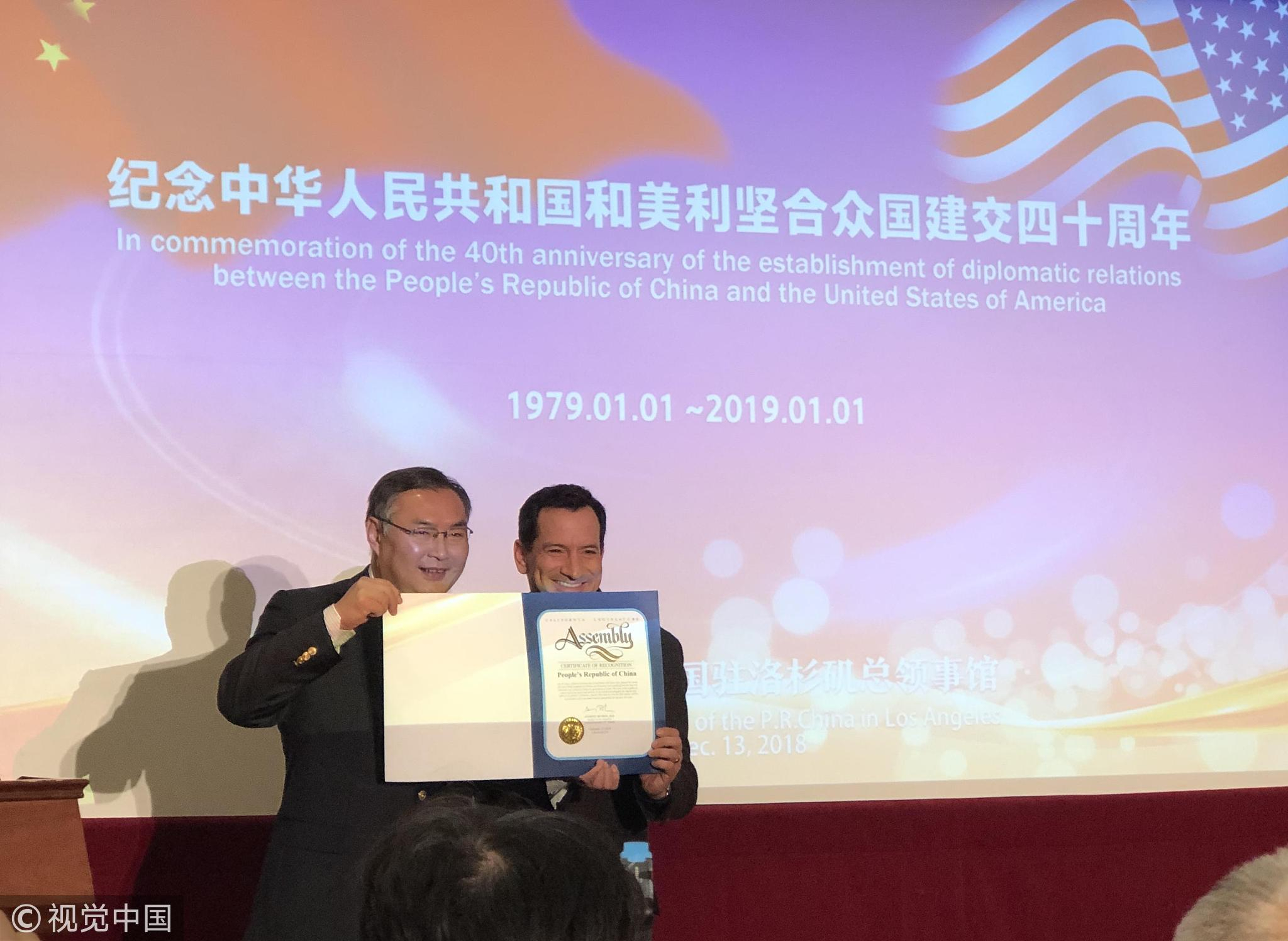 Consulate general of the People's Republic of China in Los Angeles held an event commemorating the 40th anniversary of the establishment of diplomatic relations between China and the U.S., December 13, 2018. /VCG Photo‍

Consulate general of the People's Republic of China in Los Angeles held an event commemorating the 40th anniversary of the establishment of diplomatic relations between China and the U.S., December 13, 2018. /VCG Photo‍

This year, China is expected to overtake the United States as the world's largest end market. In order to increase the attractiveness of the Chinese market, China should adopt policies benefiting international investors so that they can make profits. Open markets and free competition are also conducive to the development of China's domestic industries.
In terms of foreign policy, China can work with the U.S. to benefit the two countries and the international community.
For example, the two heads of state pointed out in their talks on the evening of December 1, 2018 during G20 that they hope to promote a peaceful resolution of the Democratic People's Republic of Korea (DPRK) nuclear issue. In Afghanistan, the Taliban is growing stronger while the Kabul government has very limited capacity.
Both China and the United States want Afghanistan to be stable. On the Syrian crisis, Iran's nuclear issue, Iraq's post-war reconstruction and other issues, the two countries do not share the same position, but efforts should still be made to seek consensus and opportunities for cooperation.
In addition, on global issues, China and the U.S. should put aside their differences in climate change for the time being and cooperate on issues related to global security and stability, such as nuclear non-proliferation, preventing an arms race among major powers and drug proliferation, and controlling cross-border movements of illegal immigrants. Despite trade frictions, the two countries should remain committed to ensuring the stability of global financial markets.
To sum up, China's rapid development has led to a change in the U.S. strategic position towards China, resulting in increased risks and uncertainties in China-U.S. relations.
Nevertheless, China should remain committed to domestic development so that the United States can accept China's socialist development path with Chinese characteristics. However, the stability of China-U.S. relations still depends on the concerted efforts of both sides.
The elites of both countries should make joint efforts in managing their differences and preventing perilous factors in causing the bilateral relations to deteriorate.
(If you want to contribute and have specific expertise, please contact us at opinions@cgtn.com.)