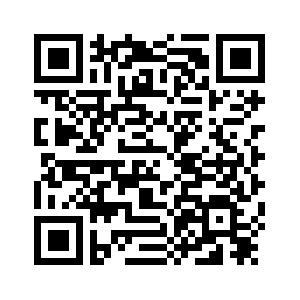 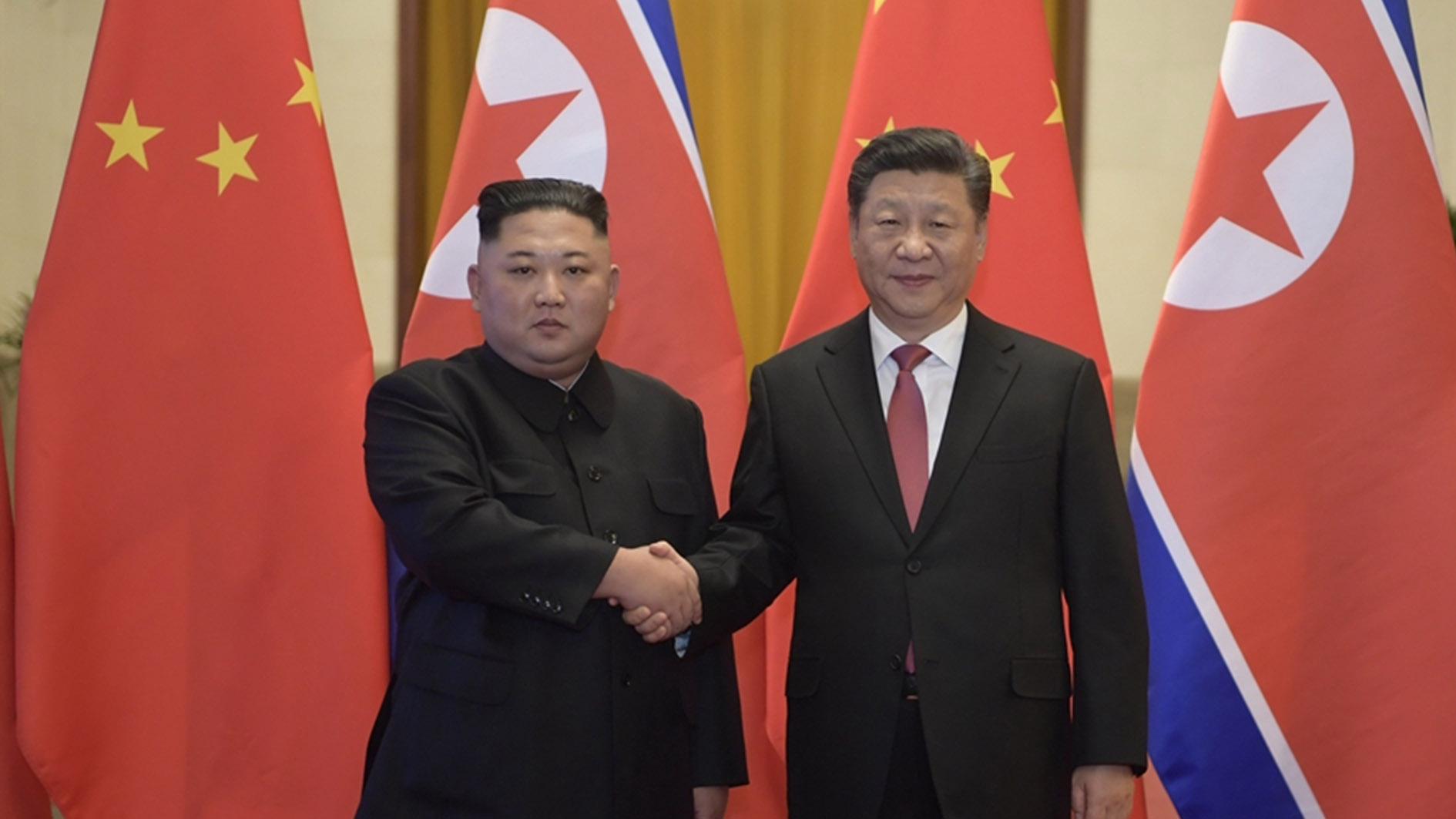 Xi Jinping, general secretary of the Central Committee of the Communist Party of China and Chinese president, on Tuesday held talks with Kim Jong Un, chairman of the Workers' Party of Korea (WPK) and chairman of the State Affairs Commission of the Democratic People's Republic of Korea (DPRK), who arrived in Beijing on the same day.
In a cordial and friendly atmosphere, the two leaders had an in-depth exchange of views on China-DPRK relations and issues of common concerns and reached important consensus.
The two sides agreed to make joint efforts to push for continuous new development of relations between the two countries in the new era, constantly advance the political settlement process of the Korean Peninsula issue, bring more benefits to people of the two countries, and make positive contribution to peace, stability, prosperity and development of the region and the world. 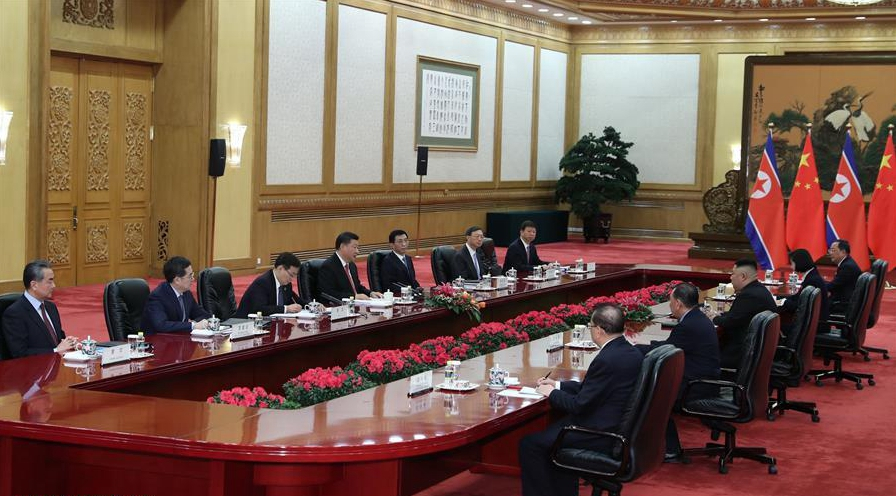 President Xi pointed out that Comrade Chairman's visit to China at the beginning of 2019, which marks the 70th anniversary of the establishment of China-DPRK diplomatic relationship, fully embodied the great importance Comrade Chairman attaches to the two countries' traditional friendship and Comrade Chairman's friendship with the CPC and the Chinese people.
President Xi stressed that with concerted efforts of both sides, the China-DPRK relations opened a new historic chapter in 2018. The two sides, with concrete actions, have demonstrated the strong vitality of the China-DPRK friendship and displayed the resolute determination of the two countries to jointly advance the political settlement of the Korean Peninsula issue.
"I am willing to work with Comrade Chairman to make sound efforts to guide the future development of China-DPRK relationship," Xi said.
For his part, Kim said he was grateful to General Secretary Xi for taking time from a busy schedule at the beginning of the year to receive the DPRK delegation. He extended festival greetings to the CPC, the Chinese government and the Chinese people on behalf of the WPK, the government and the people of the DPRK. 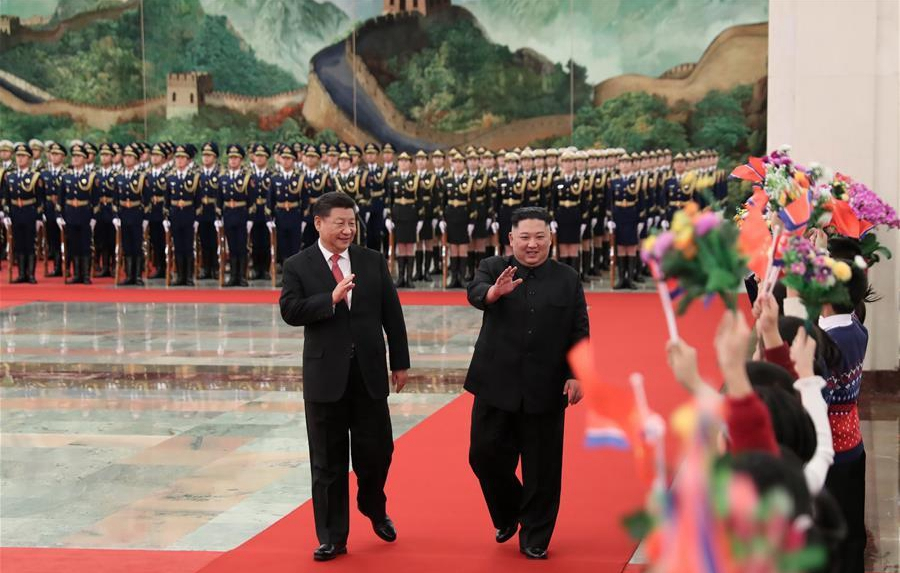 Chinese President Xi Jinping holds a welcoming ceremony for DPRK leader Kim Jong Un before their talks at the Great Hall of the People in Beijing, China, January 8, 2019. /Xinhua Photo

Chinese President Xi Jinping holds a welcoming ceremony for DPRK leader Kim Jong Un before their talks at the Great Hall of the People in Beijing, China, January 8, 2019. /Xinhua Photo

China hopes DPRK and U.S. will meet each other halfway

On the situation of the Korean Peninsula, President Xi spoke highly of the positive measures taken by the DPRK side to maintain peace and stability and promote the realization of denuclearization on the Peninsula.
He said major progress was made in the process of a political solution to the Korean Peninsula issue last year thanks to the joint efforts of China, the DPRK, and relevant parties.
Noting that a general trend of peaceful dialogue on the Peninsula has taken shape, Xi said it has become the international community's common expectation and consensus for the dialogue to continue and yield results. The political settlement of the Peninsula issue faces a rare historic opportunity.
China supports DPRK's continued adherence to the direction of denuclearization on the Peninsula, supports the continuous improvement of inter-Korean relations, supports the DPRK and the United States holding summits and achieving results, and supports relevant parties resolving their respective legitimate concerns through dialogue, Xi noted. 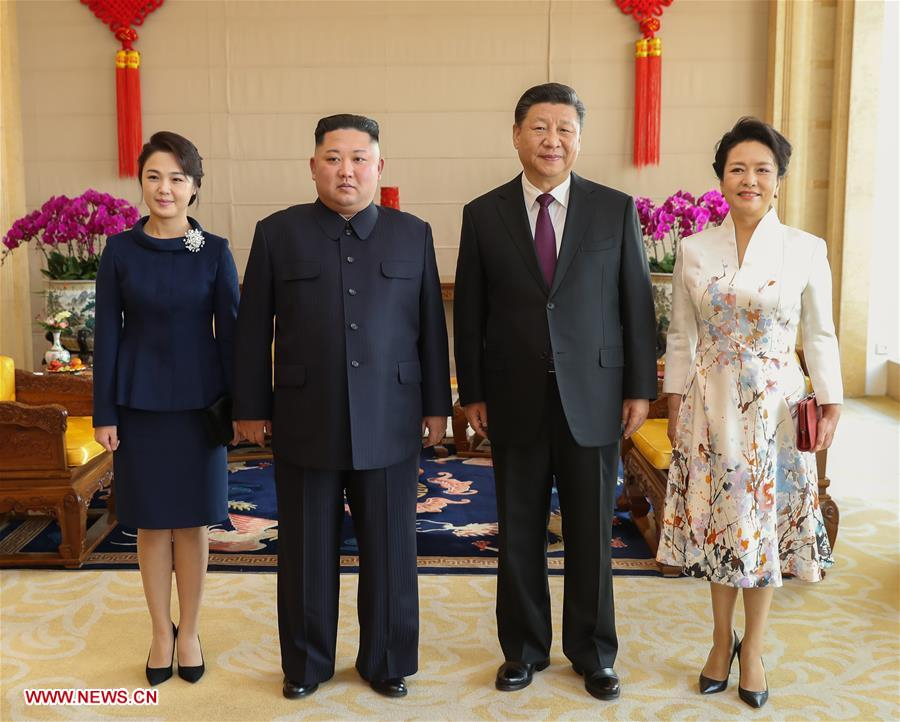 China hopes that the DPRK and the United States will meet each other halfway, Xi said, adding China stands ready to work with the DPRK and relevant parties to play a positive and constructive role in maintaining peace and stability and realizing denuclearization on the Peninsula and lasting peace and stability in the region.
Kim said the Korean Peninsula situation has been easing since last year, and China's important role in this process is obvious to all. He said the DPRK side highly and sincerely appreciates the Chinese efforts.
The DPRK will continue sticking to the stance of denuclearization and resolving the Korean Peninsula issue through dialogue and consultation, and make efforts for the second summit between DPRK and U.S. leaders to achieve results that will be welcomed by the international community, Kim said.
Kim said he hoped that relevant parties will attach importance to and positively respond to DPRK's legitimate concerns, and jointly push for a comprehensive resolution of the Korean Peninsula issue.

The two sides also informed each other of their respective countries' situations.
President Xi said this year marks the 70th anniversary of the founding of New China (in 1949). In the past seven decades, the CPC has led the Chinese people in achieving a historic leap: They have stood up, grown rich, and are becoming strong. The CPC has the resolve and confidence to unite and lead people of all ethnic groups in China to overcome all difficulties, obstacles, risks, and challenges, and forge ahead towards the realization of the Two Centenary Goals and the Chinese Dream for national rejuvenation.
President Xi said positive results have been achieved since the WPK implemented the new strategic line in the past year, demonstrating the WPK and DPRK people's strong will of loving peace and pursuing development, and receiving wholehearted support from the DPRK people and positive comments from the international community. The Chinese side firmly supports Comrade Chairman in leading the WPK and the people to implement the new strategic line and focus on developing the economy and improving people's wellbeing.
00:49 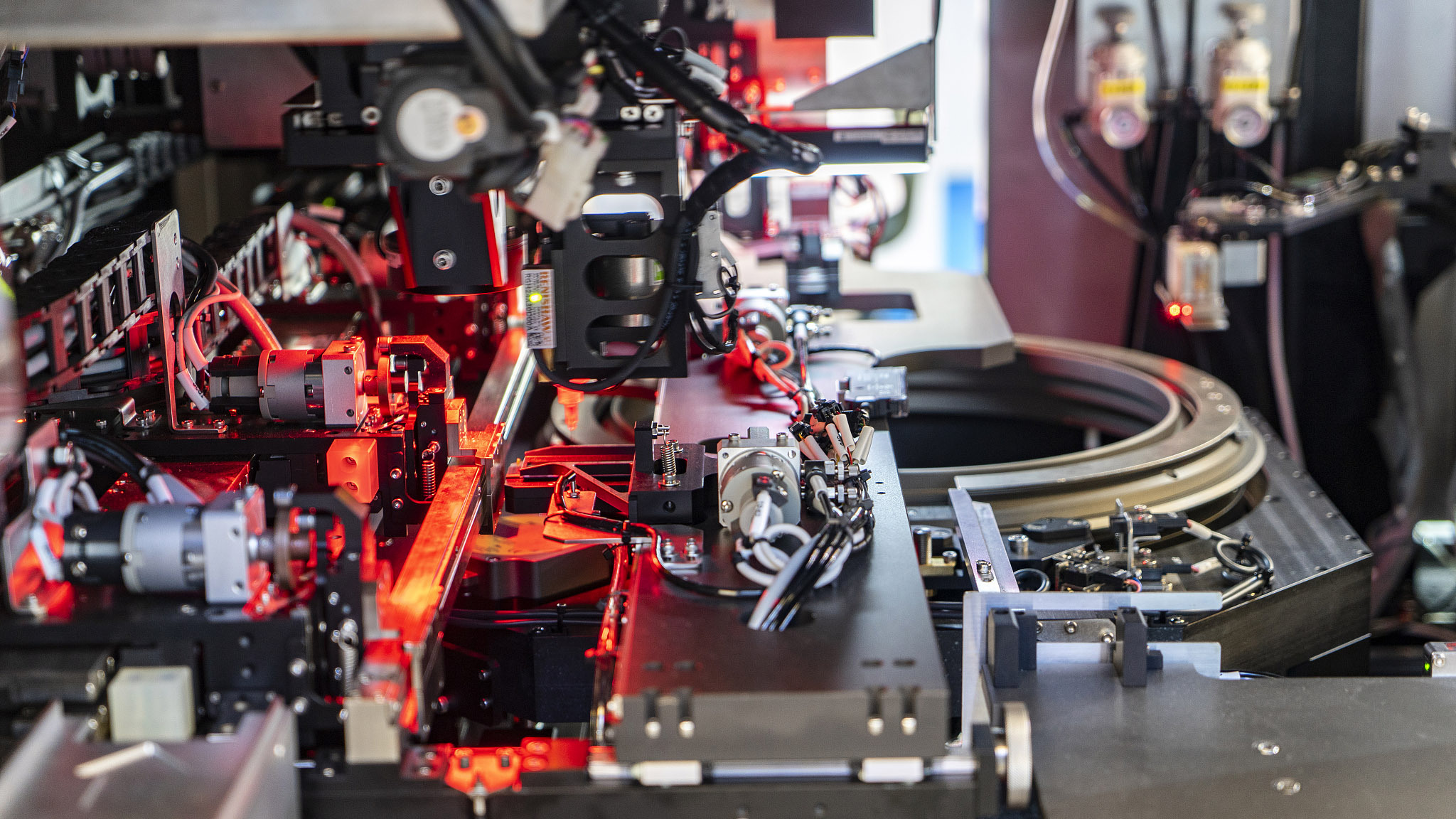 "We believe that the DPRK people will surely and constantly make new and greater achievements in the cause of socialist construction," President Xi said.
Kim said that having visited China four times in less than a year, he was deeply impressed by the achievements made in China's economic and social development as well as the Chinese people's spirit and character of striving for the country's prosperity.
The DPRK side considers China's development experience most valuable and hopes for more trips to China for study and exchanges, he said.
Kim said he believes that under the leadership of the CPC with Comrade General Secretary at the core, the Chinese people will continuously make fresh great achievements on the road of socialism with Chinese characteristics in the new era, and successfully realize the Two Centenary Goals and the Chinese Dream for national rejuvenation.
Prior to the talks, President Xi held a welcoming ceremony for Kim at the Great Hall of the People.
After the talks, Xi and his wife Peng Liyuan hosted a welcome banquet for Kim and his wife Ri Sol Ju, and they watched an art performance together.
On Wednesday, Kim visited a Tong Ren Tang pharmaceutical plant in Yizhuang, Beijing, where he inspected relevant processing and production lines of traditional Chinese medicine that use traditional and modern techniques.
Source(s): Xinhua News Agency