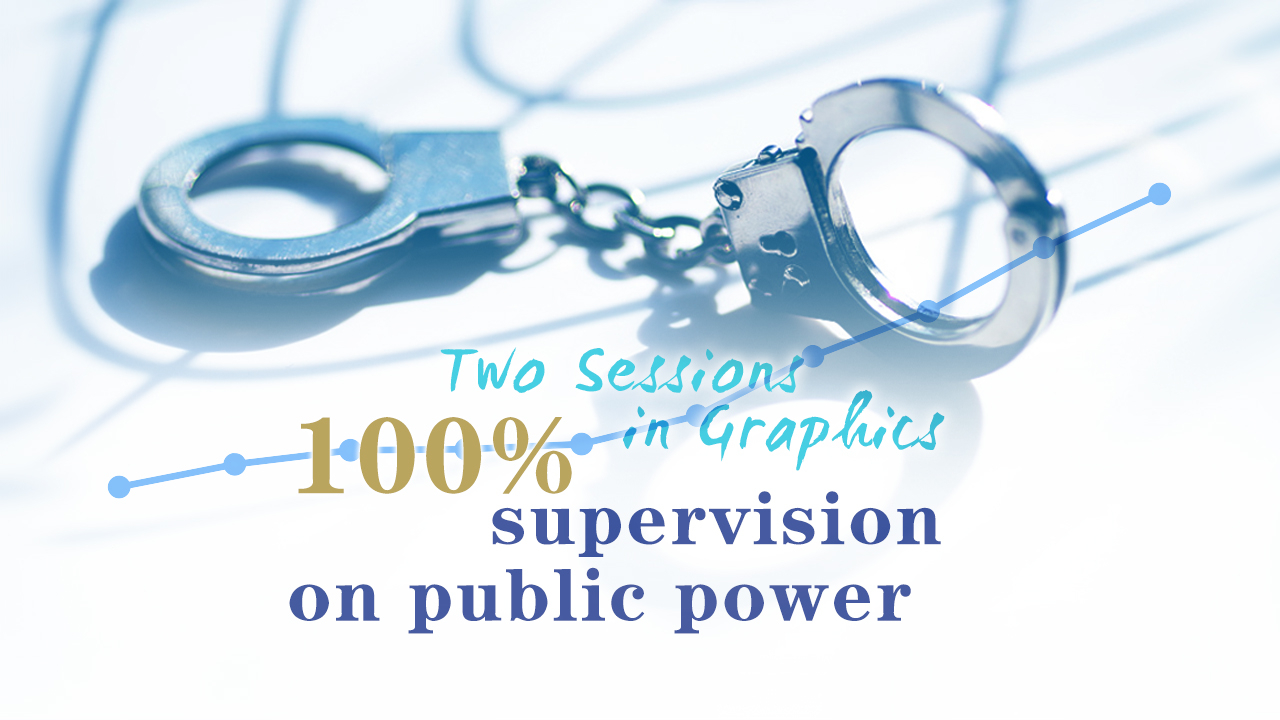 With the adoption of Supervision Law and establishment of the National Supervisory Commission (NSC) in March last year, a more sophisticated and efficient supervisory network has been formed to cover everyone in China that exercises public power.

What has China's renewed anti-graft system changed? Let's break that down by numbers. 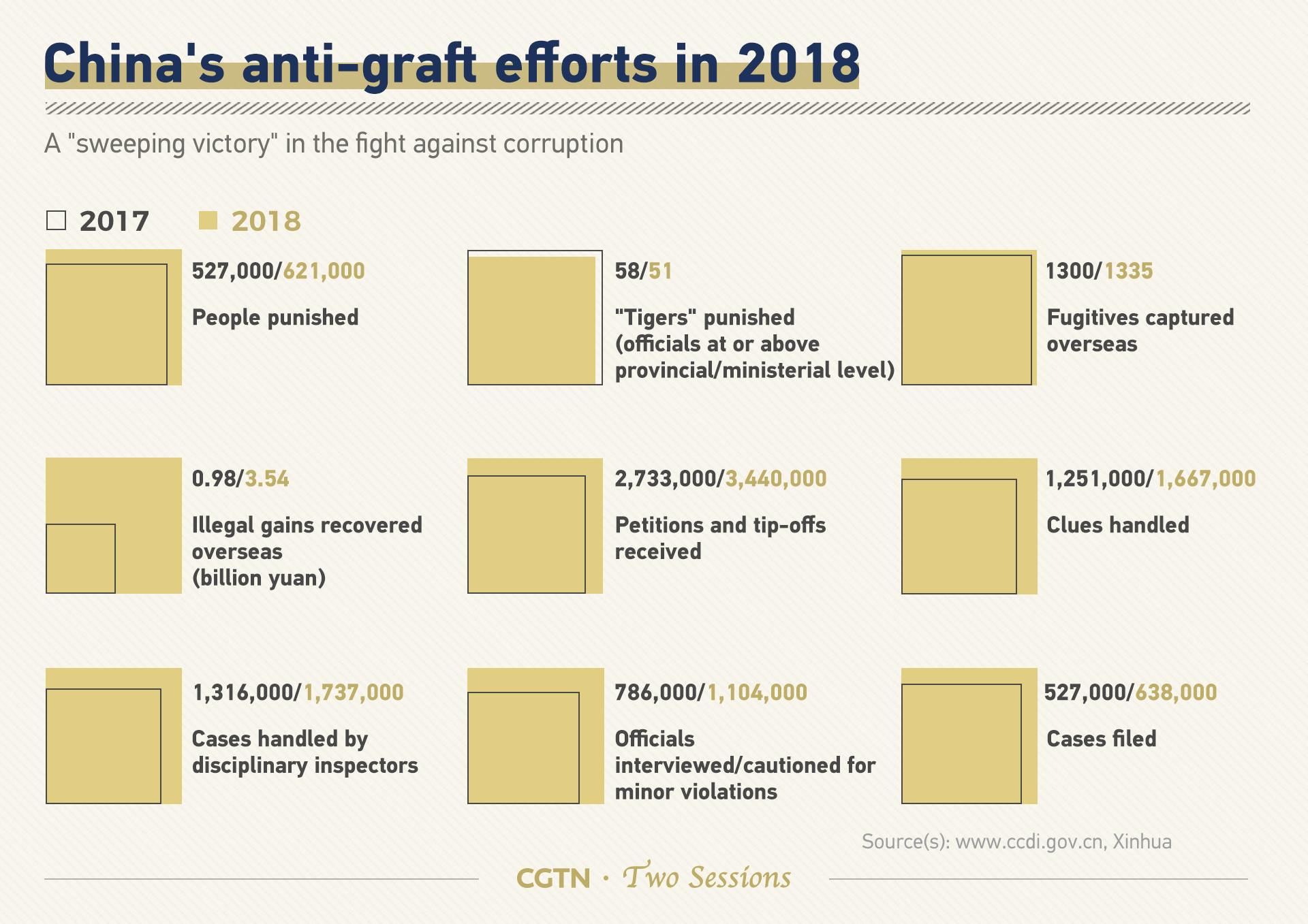 In China, almost 80 percent of civil servants and 95 percent of leading officials are members of the Communist Party of China (CPC), and they are overseen by the CPC Central Commission for Discipline Inspection (CCDI). But the old supervision system left loopholes for non-Party members who exercise public power.

There is now a new supervision organ: The NSC. It extends the CCDI's purview from the Party to the entirety of the state, the government at all levels, and indeed to all of society, including state-owned enterprises, banks, universities, academies, hospitals, and the like. Now no agency or organization is sacrosanct or immune. 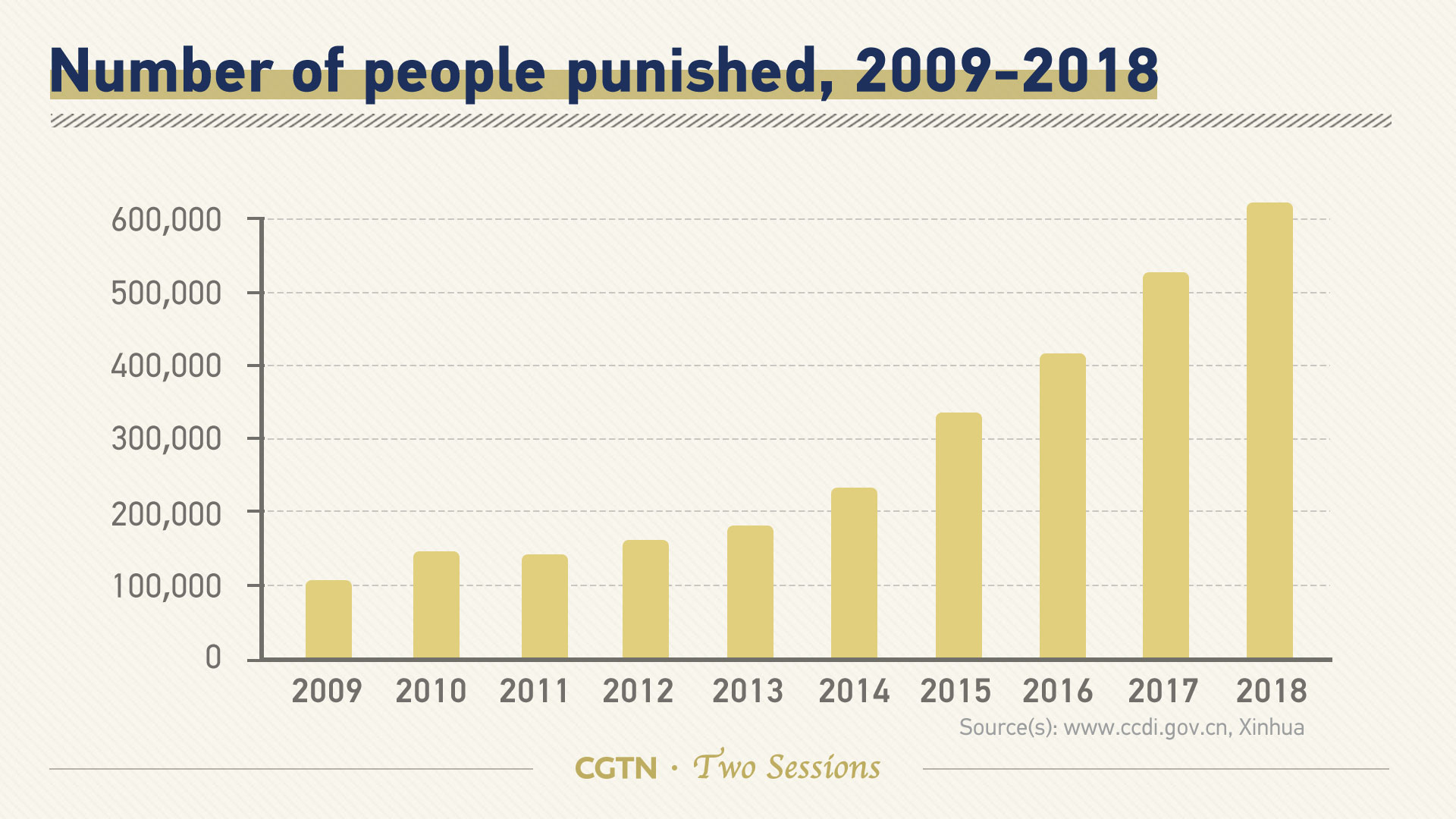 The number of people punished kept increasing in 2018, so did the attention paid to officials with minor offenses.

About 1.1 million officials were interviewed and cautioned for slight violations, more the 60 percent of the total cases disciplinary inspectors handled in 2018. Abundant resources were used to detect minor misconduct in the early stage to prevent it from developing to serious corruption.

After the reorganization of the anti-graft organs, the supervision system has about 10 percent more personnel than the previous entities had, but it will have 100 percent more areas to cover.

Power brings worries. In response to public concern as to "who supervises the supervisors," measures that tackle corruption among their own staff have been rolled out among other upgrades in the national anti-graft structure. 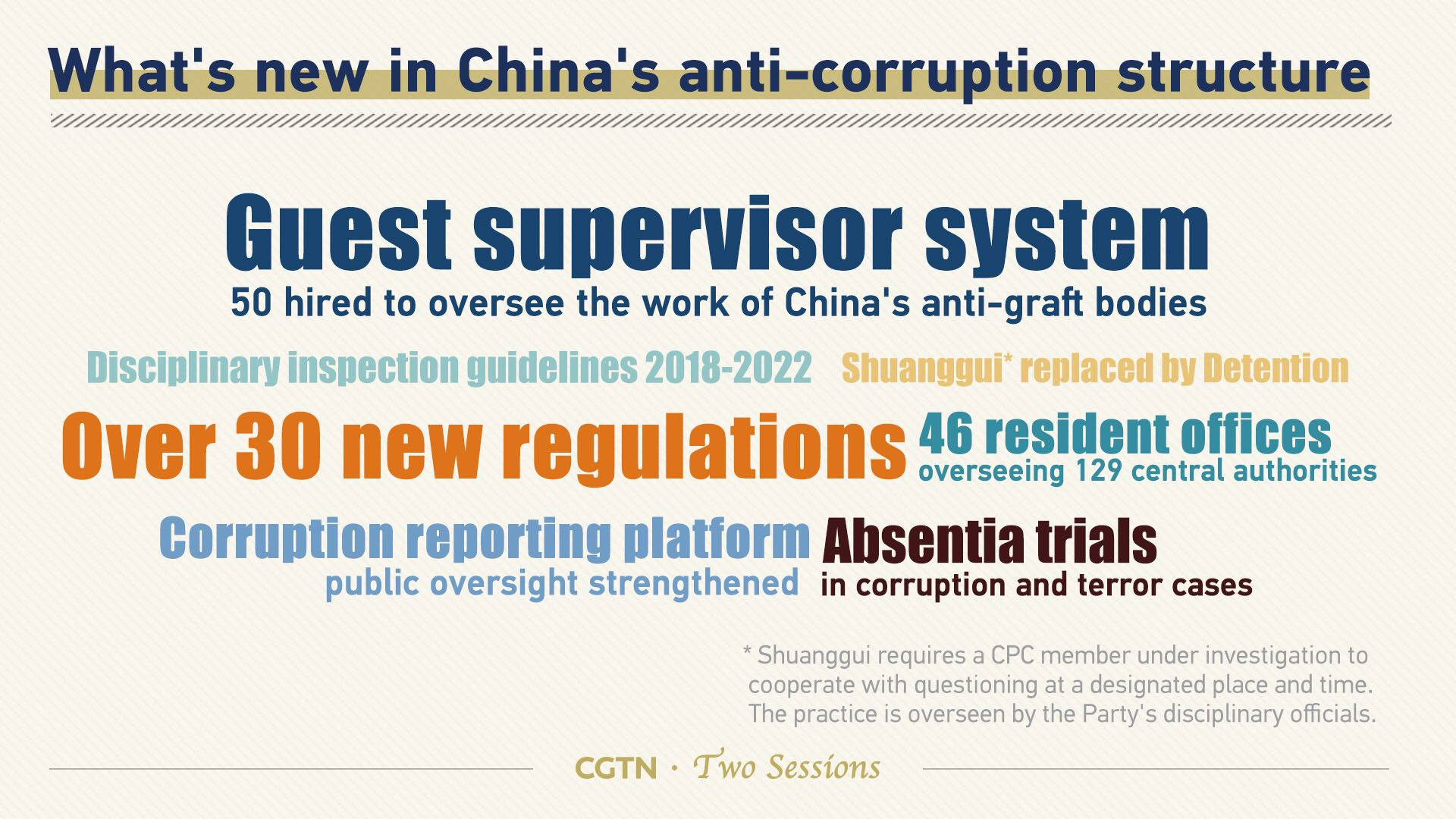 For example, a first group of 50 part-time supervisors has been hired to oversee the work of the anti-graft bodies at all levels and their staff. And the building of a corruption reporting platform is in full swing that covers China's disciplinary inspection and supervisory agencies.

The Chinese anti-corruption organs are making good use of new technology as well, including big data and online platforms to weave a more advanced supervision network. 3.44 million petitions and tip-offs were received in 2018, a 26 percent jump from 2017. 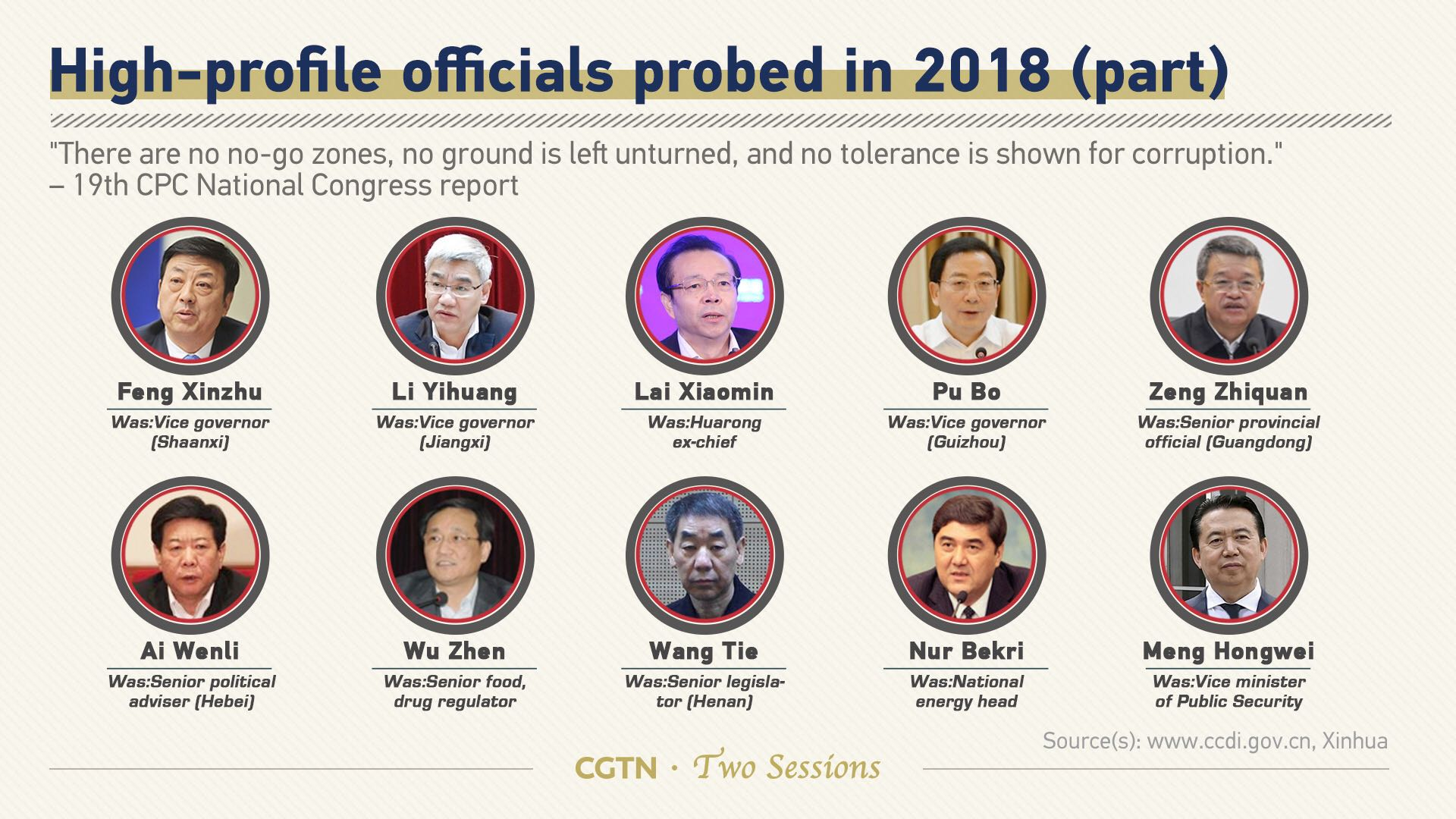 While chasing corrupt officials from high-ranking "tigers" to "flies" at lower levels within the country, China does not shy away from demonstrating its zero-tolerance of corruption to the world.

In the past year, Beijing launched operations such as "Sky Net 2018" to hunt down fugitive officials who have fled overseas, and showed its readiness to cooperate with law enforcement agencies in other countries as well. 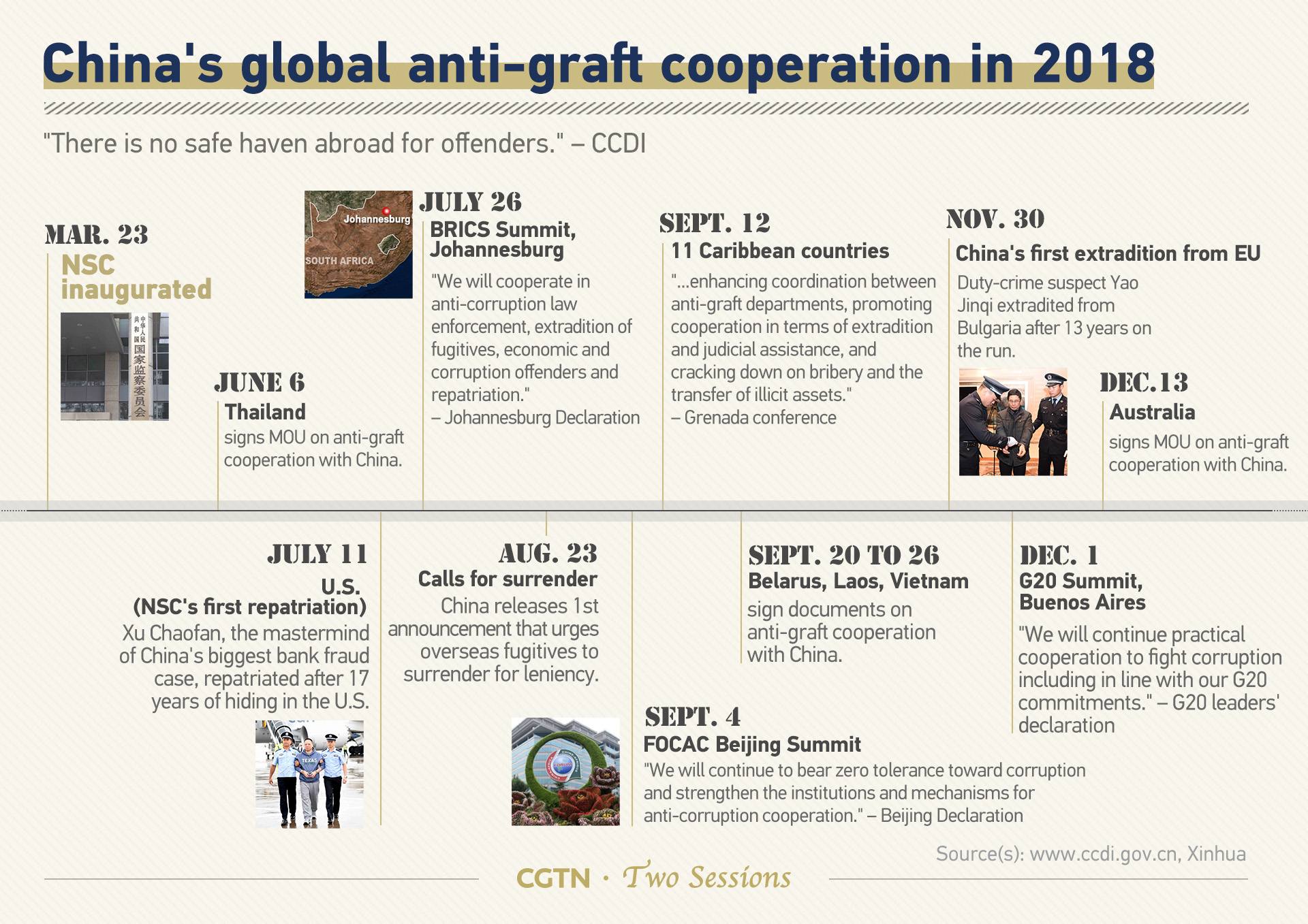 Pooling supervisory powers that used to be divided and form a centralized, unified and efficient state anti-graft supervisory system, China has witnessed notable progress in its anti-graft campaigns last year. The momentum will keep on.

In 2019, efforts would be made to expose political deviation in the implementation of the Party's lines, guidelines and policies and the CPC Central Committee's decisions and to curb the practice of formalities for formalities' sake and bureaucratism, according to a CPC meeting in late February.

This year's work priorities of China's top anti-graft body also include upholding the Party's political building as the top principle and innovating the disciplinary inspection and supervision system.

For global anti-corruption efforts, "Sky Net 2019" was already launched in January to capture more fugitive suspects and prevent more corrupt officials from fleeing, and China will continue to show its resolution and willingness to cooperate with international society.