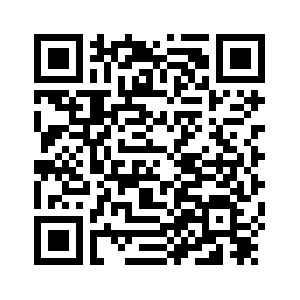 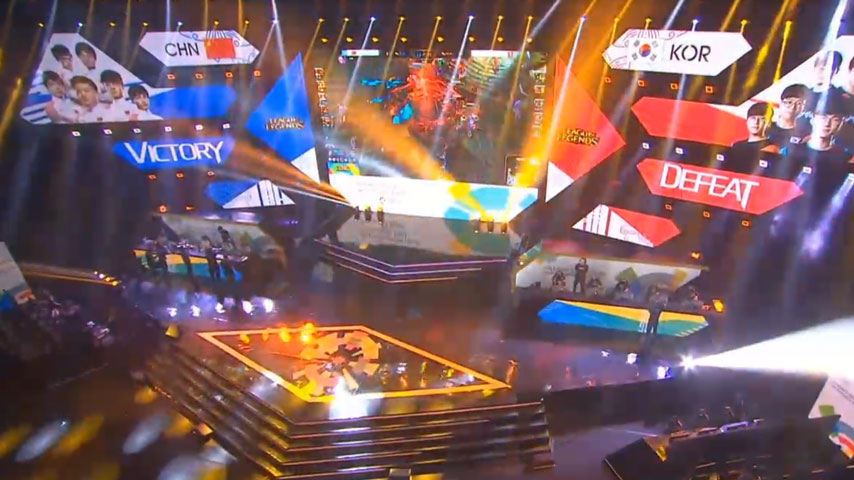 China won its second gold medal in the eSports section of the Jakarta Asian Games by beating S. Korea 3:1 in the video game League of Legends.
The game, owned by Chinese Internet giant Tencent, is one of the most played eSports titles in the world. It's also popular in Asia because S. Korea and China have the best-performing players. 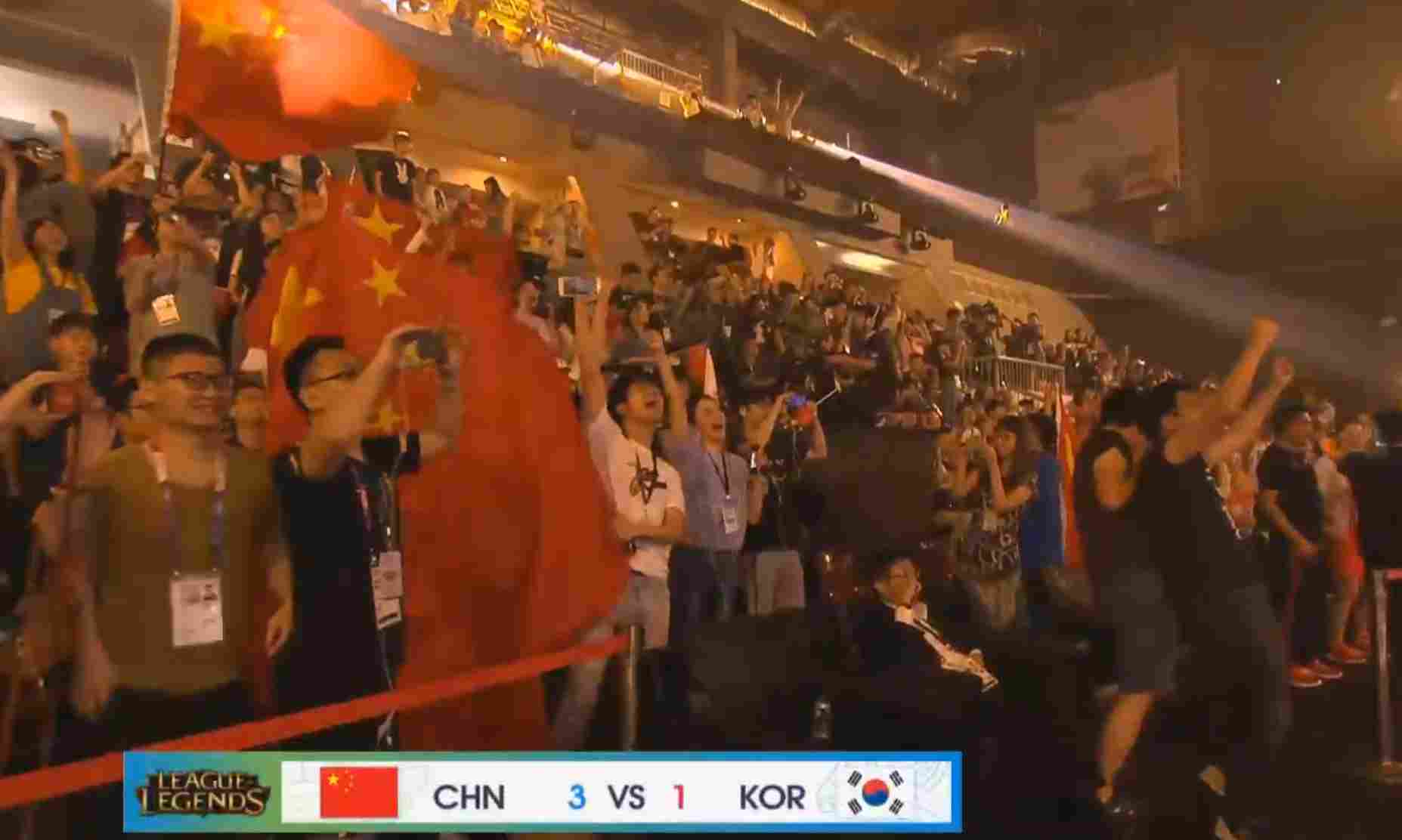 Teams from the two countries have been clashing with each other for years, with the S. Korean team taking the lead at the World Championship.
But when it comes to the Asian Games, the Chinese team took their chance. 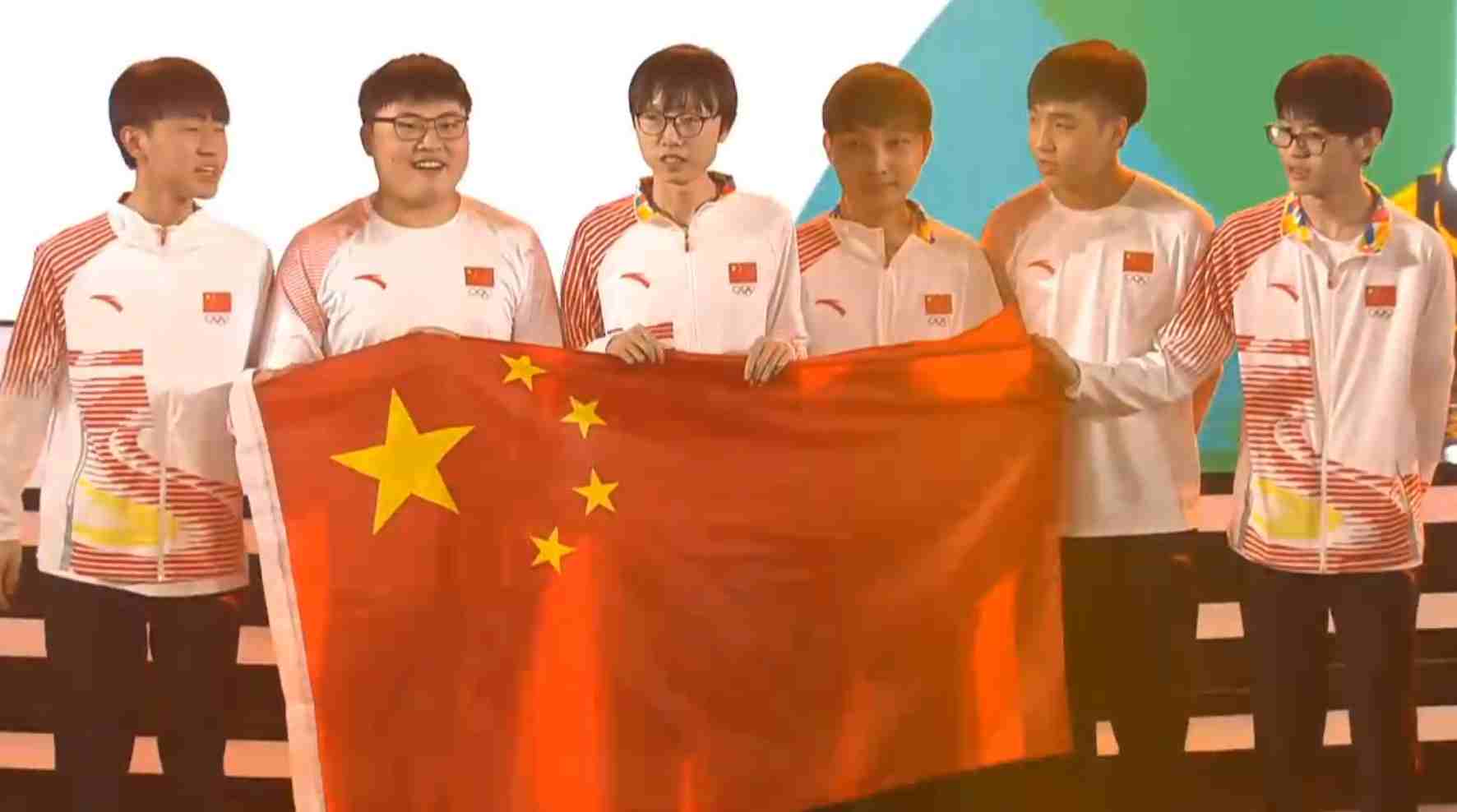 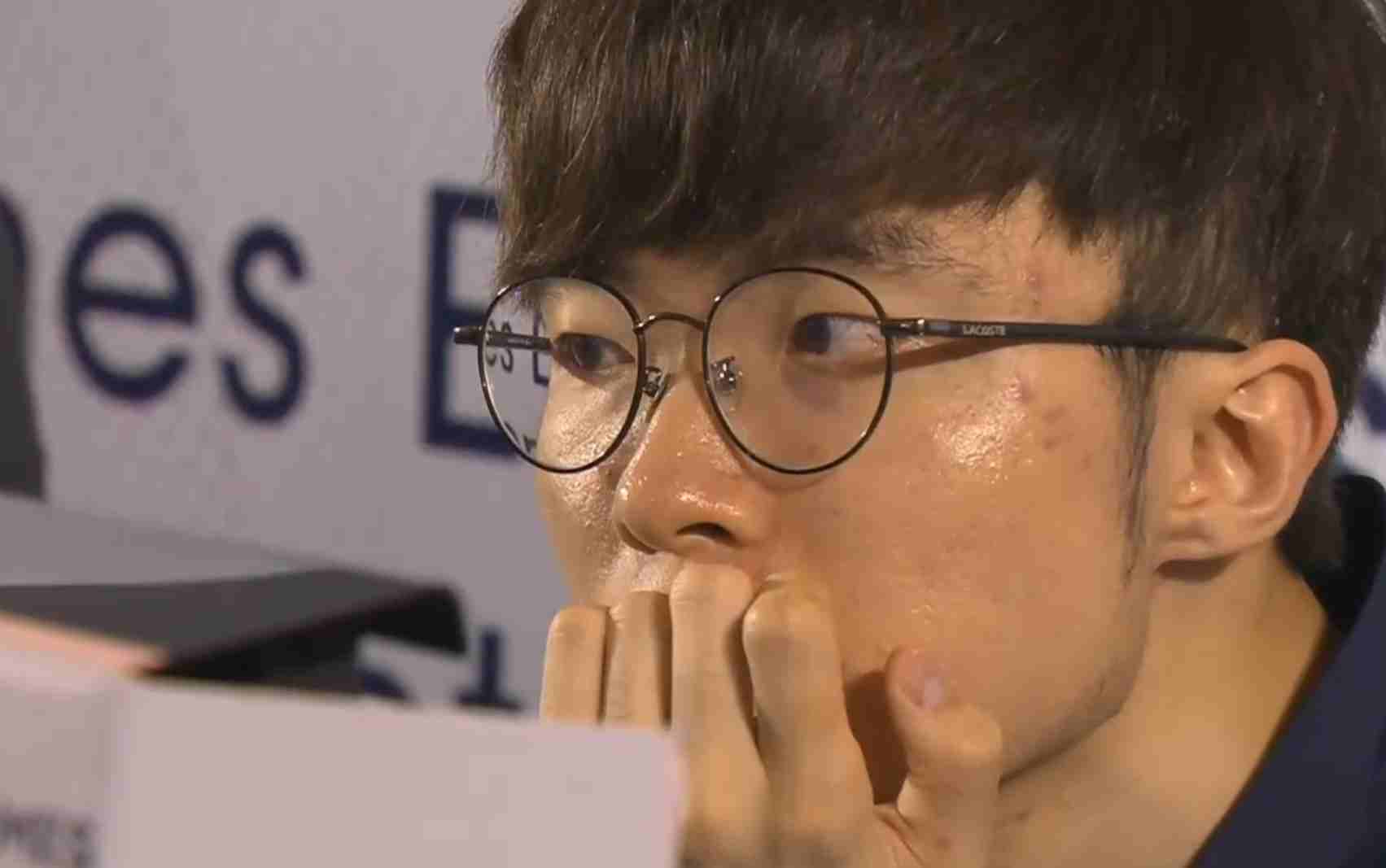 In the third match, China's star player Jian "UZI" Zihao managed to achieve a "legendary" in the game by getting as many as eight "final hits" without being thrown out. And he continued to eliminate 12 S. Korean characters to finish the match perfectly.
An interesting fact in the video broadcast of the game is that the S. Korean national flag was displayed beside UZI's photo when he became "man of the match" in the first round. But when he became the VIP again in the third, the flag was changed back to the right one. 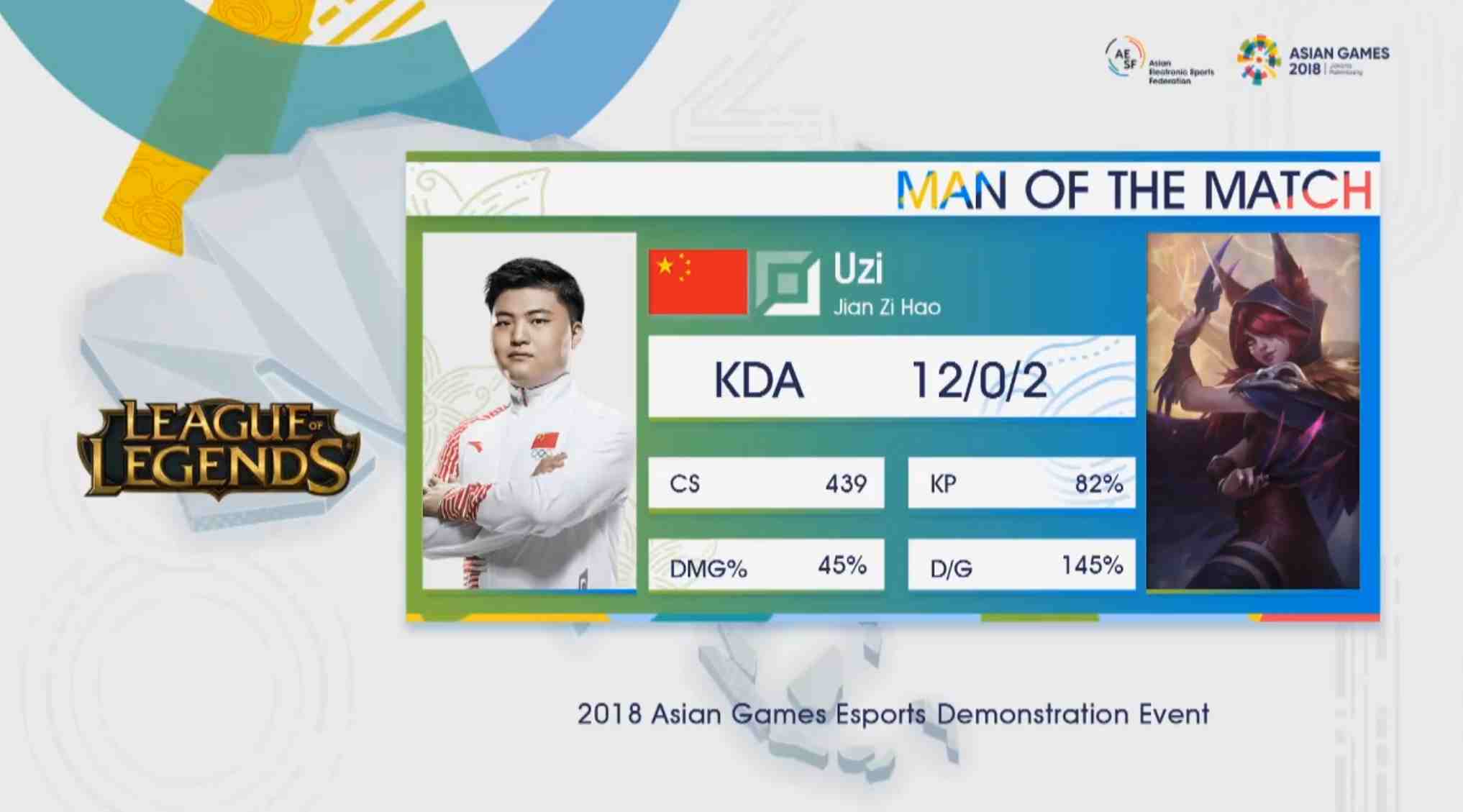 UZI's performance data in the third match /Screenshot from YouTube

UZI's performance data in the third match /Screenshot from YouTube

China participated in four of the six video game titles at the Asian Games, which featured eSports as a demonstrative sport for the first time.
The country made history by winning the first gold medal in this new category in the Asian Games and went on to claim a gold and a silver medal.
In an oral letter posted on Tencent Sports, captain Jian Zihao shared his idea about eSports.
If you are interested in eSports, you shall know my name.
I'm Jian Zihao, and my ID for LOL is "Uzi," which is the name of a machine gun. I think the gun and I share something in common.  We are both impetuous and aggressive. 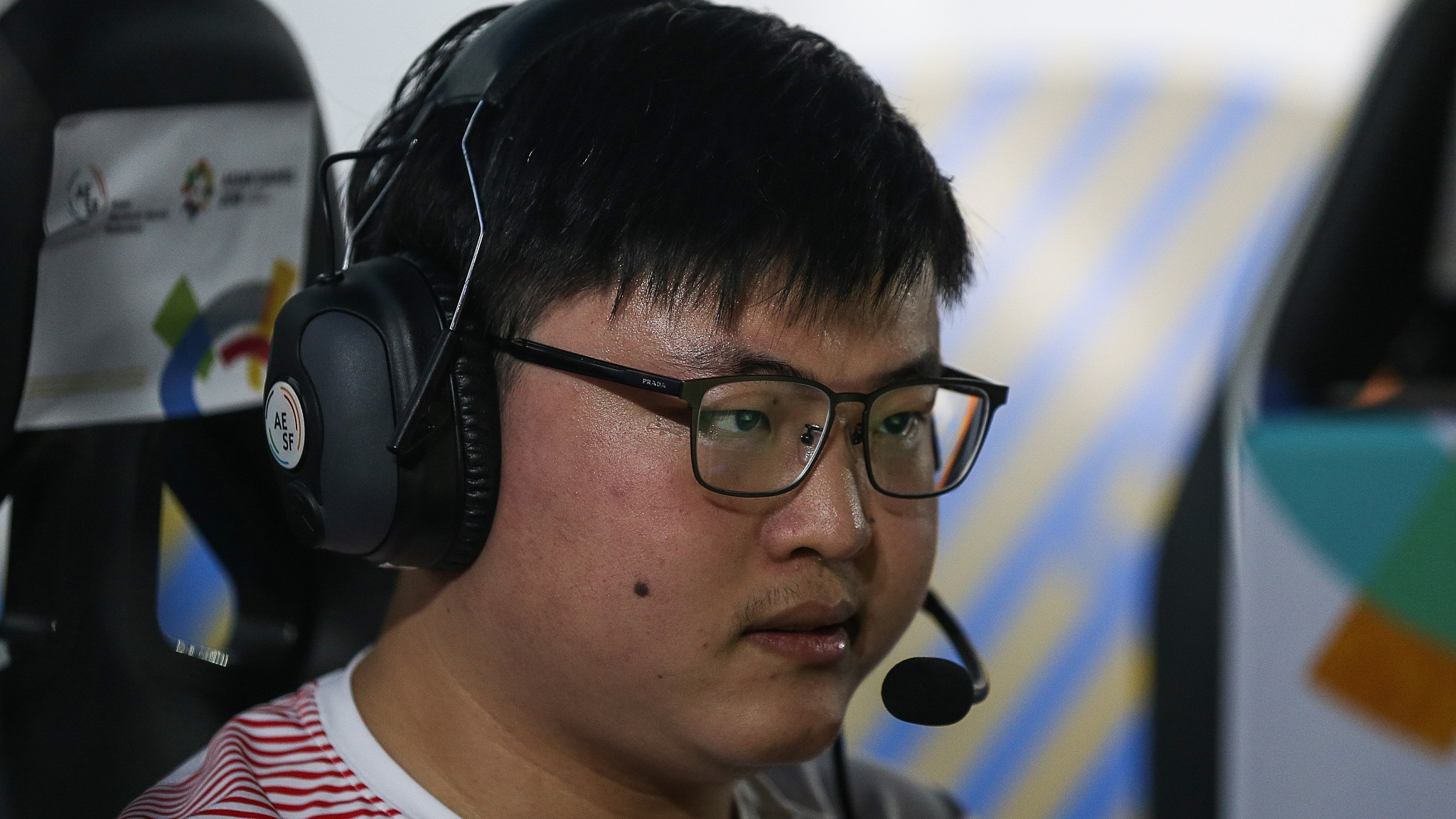 When you are reading this letter, I must be fighting at the 2018 Asian Games. Before the event, Faker said in an interview that he wanted to prove South Korea is the best in eSports. I wanted to beat South Korea and prove that they are not undefeatable.
I'm excited to attend the Asian Games because it's not only rectification of my name but also the first time in history for China to send a national team to compete in an eSports event. We are wearing the uniform of Team China with the national flag on the chest and living in the Asian Games village with athletes of other sports. I have never imagined that any of this will happen to me. 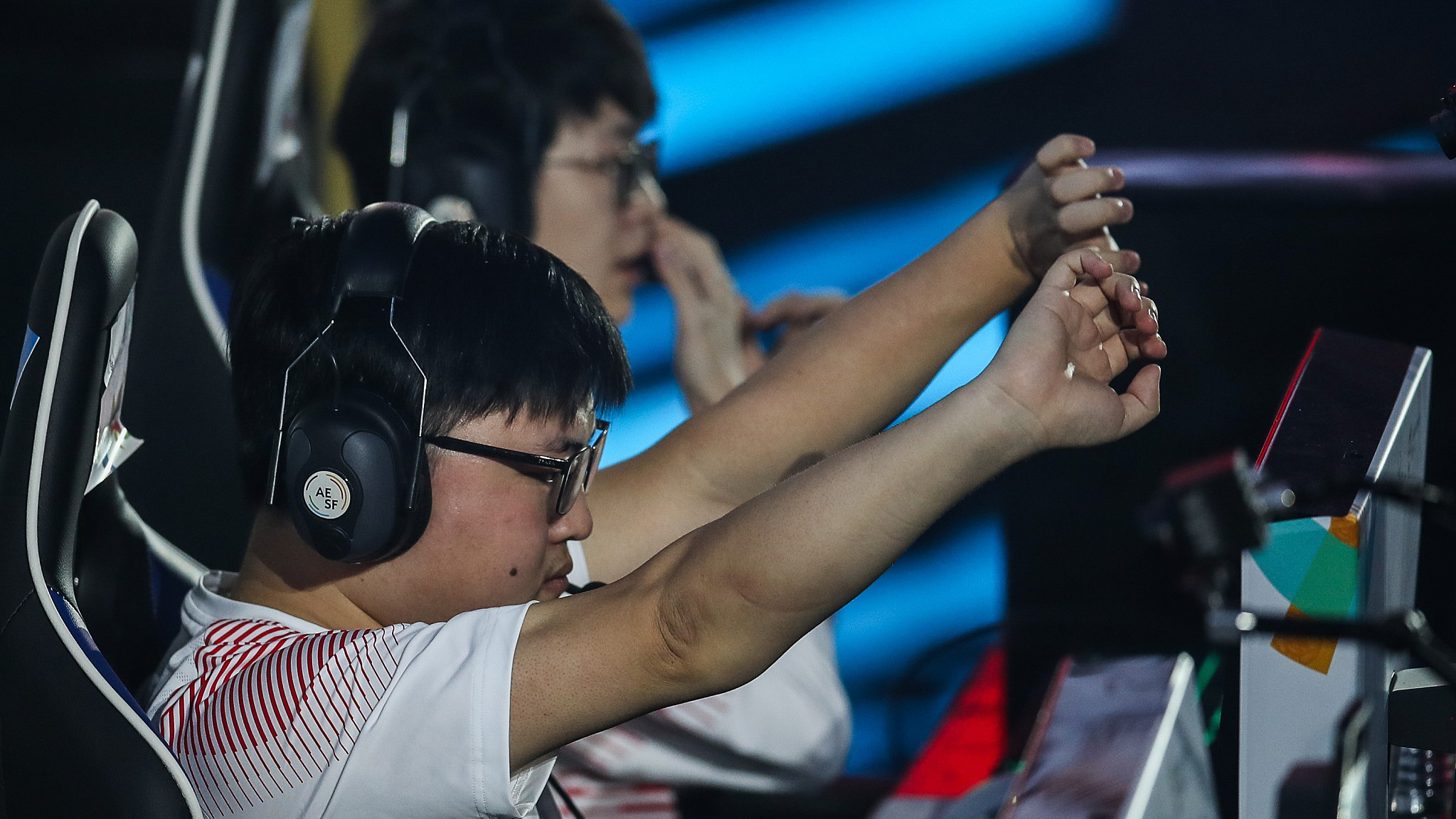 eSprots is physically challenging, just like other sports. /VCG Photo

eSprots is physically challenging, just like other sports. /VCG Photo

eSports in China carries dreams of so many young people. I want to take this opportunity at the 2018 Asian Games to prove to those who question and misunderstand us that eSports is a real sport. I want to tell you the difference between video games and eSports with my story, the story of how Jian Zihao becomes Uzi.
Since I became a professional eSports player, I filled my life with practice and competing with no room for making a difference between workdays and weekends. Maintaining my muscles tense and sitting for hours every day have brought trouble to my shoulders, fingers and backs. My health started to get worse in 2015 as if my body is telling me to take a break. 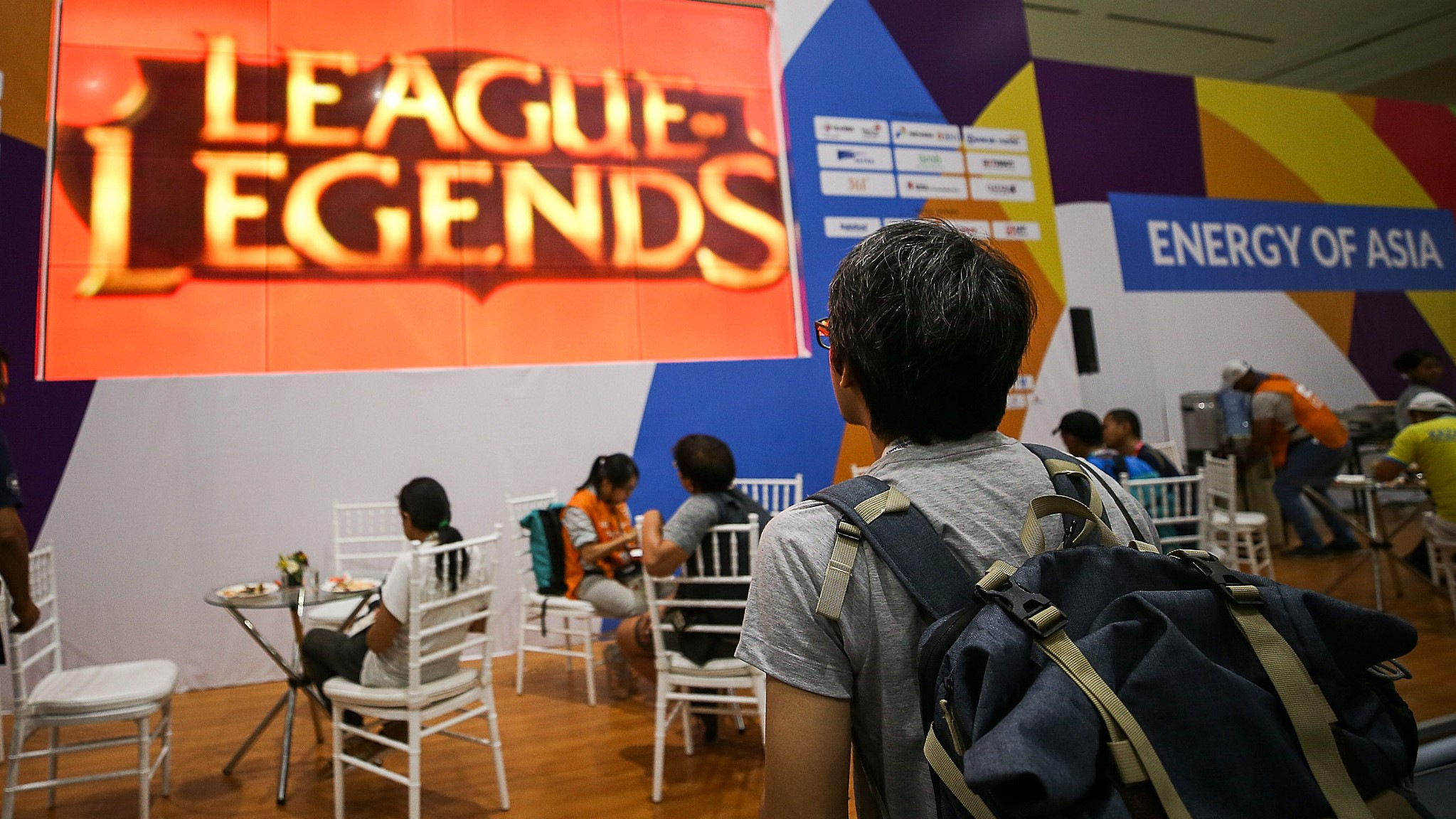 League of Legends has attracted many young faces to the 2018 Asian Games. /VCG Photo

League of Legends has attracted many young faces to the 2018 Asian Games. /VCG Photo

Today, I will take at least 30 minutes of treatment after practice and games, but I will not change how I play. It's those pains that define who I am. I believe every top athlete in the world have gone through pains that ordinary people cannot stand and live with various illness to become who they are. eSports players are no exception.
I'm not a genius, but I just enjoy strategizing. The difference between a professional player and a regular gamer lies in whether you can make yourself start to like the things you used to dislike. Games in eSports keep changing, and we are not able to predict how they change. That's why we need to keep working hard and keep learning to get better. 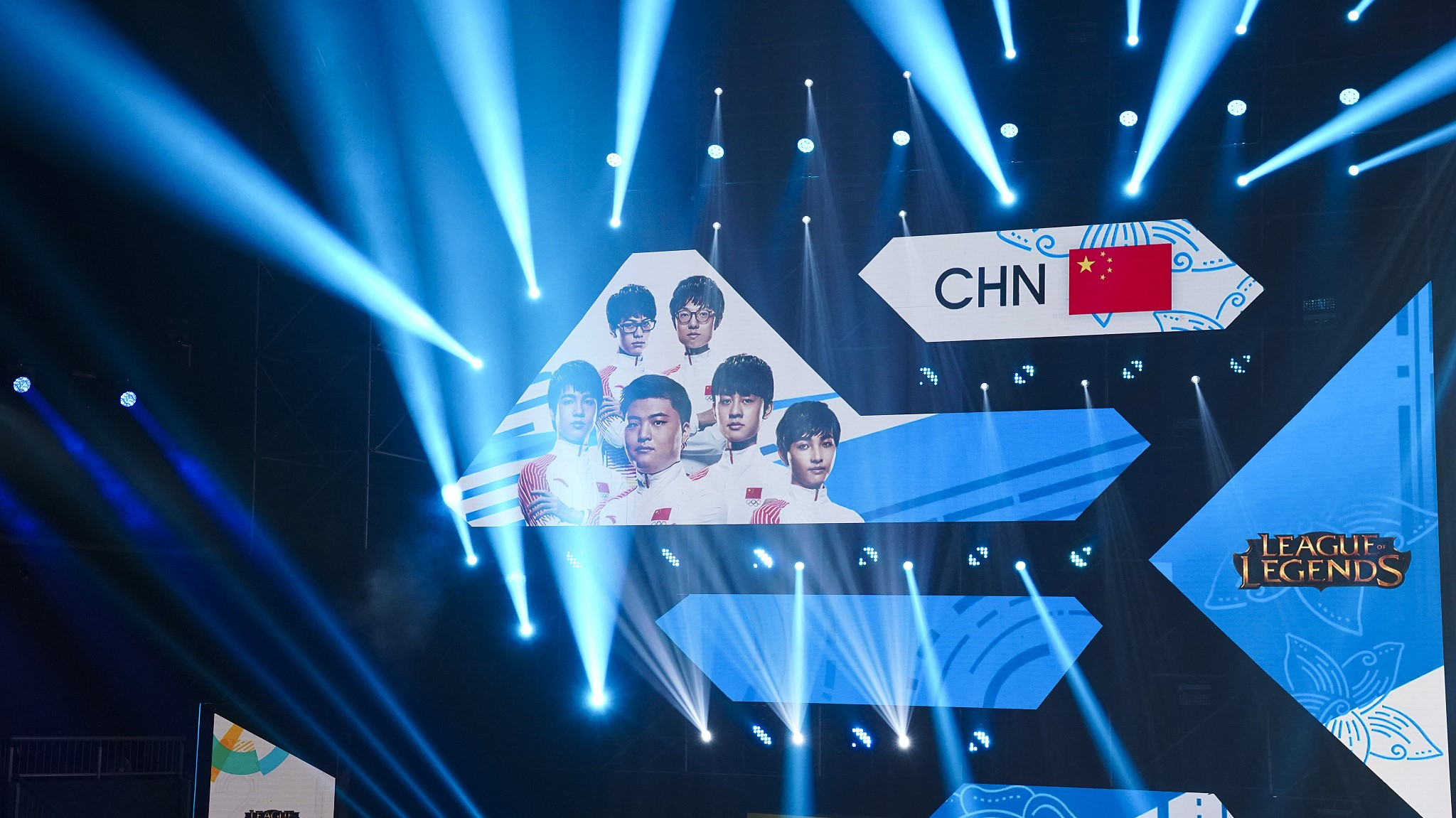 Team China for League of Legends at the 2018 Asian Games. /VCG Photo

Team China for League of Legends at the 2018 Asian Games. /VCG Photo

I won some champions with RNG this year. People finally stopped calling me "the wild dog that has won nothing in six years." I have tasted victory and learned how to achieve it and trust your teammates. No matter how strong your rival is, you must believe that you can win, by playing together.
I want to say thank you to eSports for turning Jian Zihao into Uzi. I used to play eSports only for fun. I wouldn't call it "eSports" but simply "video games" I was playing back then. Now, I will consider and discuss a lot. I will pay attention to the coach's plan and how my teammates feel. It's eSports that helped me grow from a child into an adult and gave me something more than skills. I have learned how to communicate with people, how to control my temper and how to be a better person.
It's my turn now. Please cheer for me and cheer for Chinese eSports.