Global diets must change to save lives
Bertram Niles 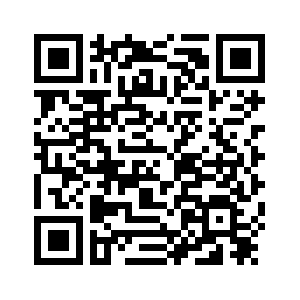 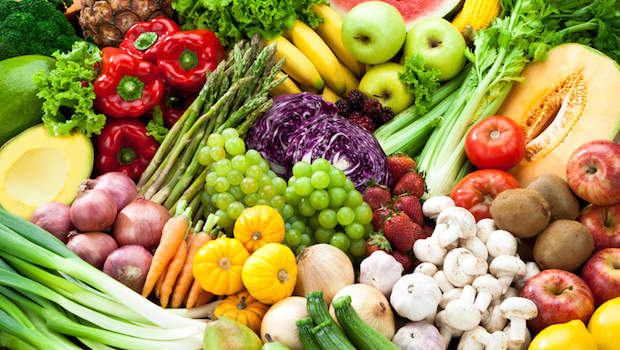 "You are what you eat," goes an old saying. In effect, what we put in our bodies has a direct impact on our well-being.
That much has always seemed pretty obvious, but a recent large-scale study has confirmed the link between diet choices and the risk of early death in stark terms.
According to the Global Burden of Disease study, an estimated 11 million deaths in 2017, about a fifth of total deaths among adults, were associated with poor diet. That's more than for tobacco, hypertension or any other health risk.
The study, published in the Lancet, tracked dietary trends from 1990 to 2017 in 195 countries.
“Among all forms of malnutrition, poor dietary habits – particularly low intake of healthy foods – is the leading risk factor for mortality,” the researchers concluded.
Across all 15 dietary components that were examined, more deaths were tied to a lack of eating healthy foods as opposed to eating too many unhealthy foods.
The finding might require a change in strategy by health authorities, according to study co-author Dr. Christopher Murray, director of the Institute for Health Metrics and Evaluation at the University of Washington.
“While sodium, sugar, and fat have been the focus of policy debates over the past two decades, our assessment suggests the leading dietary risk factors are high intake of sodium, or low intake of healthy foods, such as whole grains, fruit, nuts and seeds, and vegetables,” he said.
Less emphasis on junk food
“Dietary policies focusing on promoting healthy eating can have a more beneficial effect than policies advocating against unhealthy foods,” added Dr. Ashkan Afshin, lead author on the study and a university colleague of Murray.
In essence, the spotlight may have to be less in the future on junk food and more on the consumption of solid nutrients.
Diets globally were found to be low in fruits, vegetables, legumes, whole grains, nuts and seeds, milk, fiber, calcium, seafood omega-3 fatty acids and polyunsaturated fatty acids. They were high in red meat, processed meat, sugar-sweetened beverages, trans fatty acids and sodium. 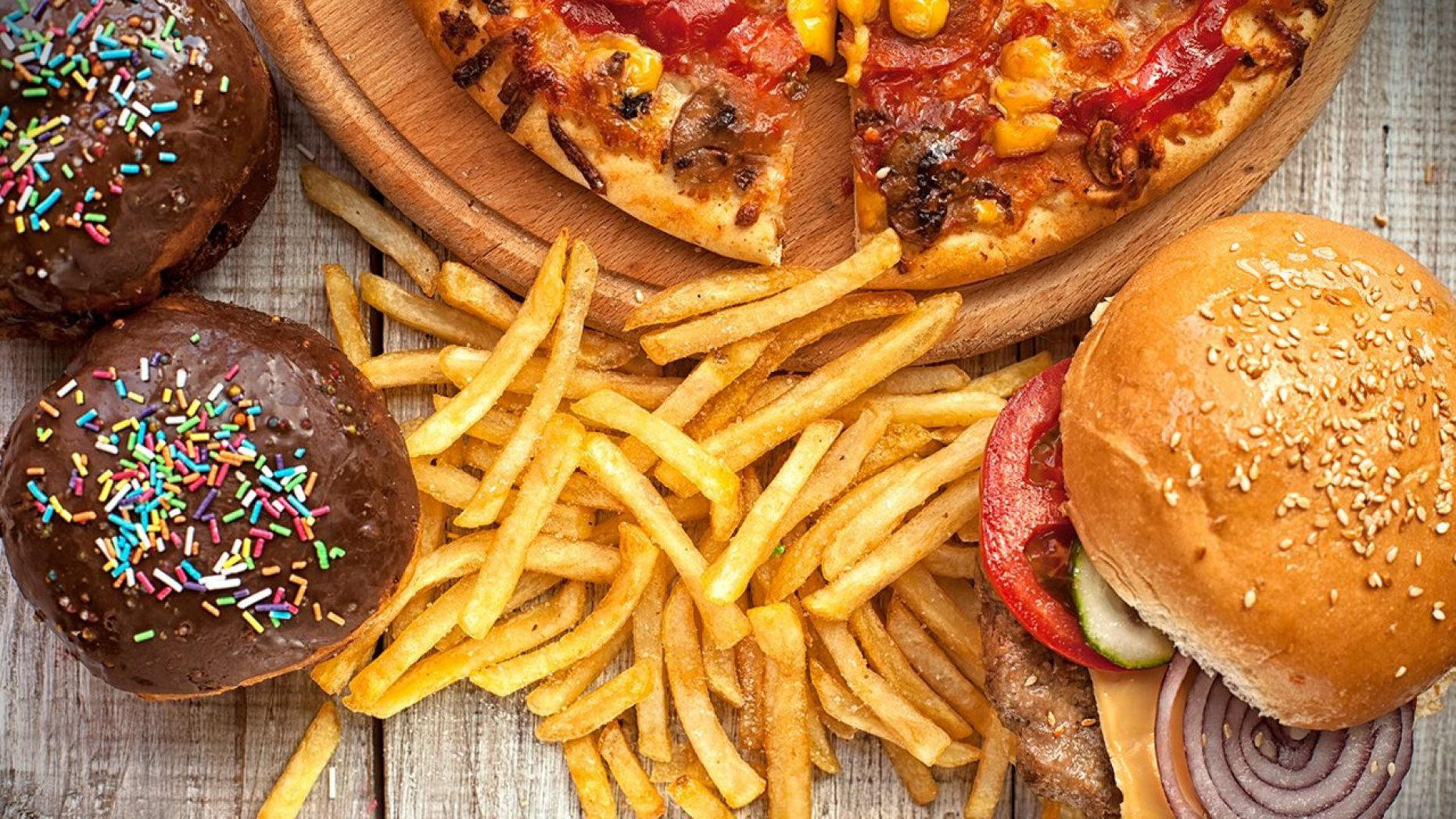 Research suggests that people may be more willing to comply with nutrition guidance if they are told to eat more of something good, rather than less of something bad. /File photo

Research suggests that people may be more willing to comply with nutrition guidance if they are told to eat more of something good, rather than less of something bad. /File photo

The study determined that such suboptimal diets contribute to a range of chronic diseases, specifically cancers, cardiovascular diseases, and diabetes that cause death.
They also contribute to long-term disability, resulting in 2017 in 255 million disability-adjusted life years (DALYs), which equal the sum of years of life lost and years lived with ill-health or disability.
None of the 21 regions covered in the report ate the optimal amount of all 15 dietary elements.
Some regions did manage to eat some dietary elements in the right amounts. The exceptions were the intake of vegetables in central Asia, seafood omega-3 fatty acids in the high-income Asia Pacific, and legumes in the Caribbean, tropical Latin America, South Asia, western sub-Saharan Africa, and eastern sub-Saharan Africa.
Among unhealthy food groups, consumption of sodium and sugar-sweetened beverages was higher than the optimal level in nearly every region.
The challenge of change
Regionally, high sodium intake (above 3g per day) was the leading dietary risk for death and disease in China, Japan, and Thailand. Low consumption of whole grains (below 125 grams per day) was the leading nutritional risk factor for death and disease in the United States, India, Brazil, Pakistan, Nigeria, Russia, Egypt, Germany, Iran, and Turkey. In Bangladesh, low intake of fruits (below 250 grams per day) was the leading dietary risk, and, in Mexico, low consumption of nuts and seeds (below 21 grams per day) ranked first. 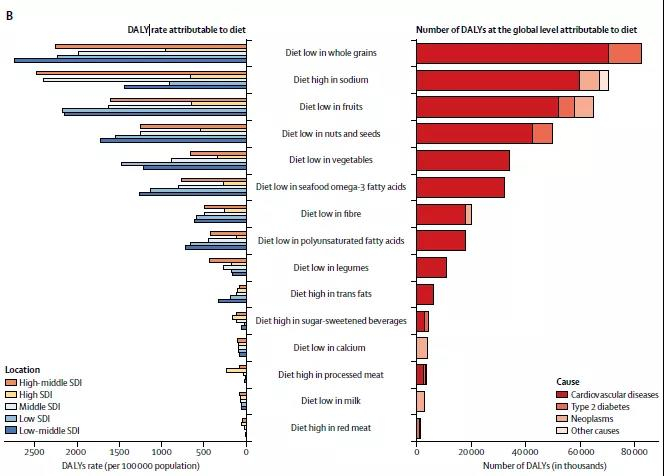 The countries with the lowest rates of diet-related deaths were Israel (89 deaths per 100,000 people), France, Spain, Japan, and Andorra. China ranked 140th (350 deaths per 100,000 people). The countries with the highest rates of diet-related deaths were Uzbekistan (892 deaths per 100,000 people), Afghanistan, Marshall Islands, Papua New Guinea, and Vanuatu.
The authors of the study said that their findings highlight the urgent need for coordinated global efforts to improve diet, through collaboration with various sections of the food system and policies that drive balanced diets.
But that will not be easy, given that changing dietary habits has proven to be hard.
One hurdle to overcome is that healthy options are generally more expensive. According to Professor Nita Forouhi of the University of Cambridge School of Clinical Medicine, two servings of fruits and three servings of vegetables per day per individual account for 52 percent of household income in low-income countries, for example.
Also, increasingly sedentary lifestyles and greater availability of non-healthy foods ordered via smartphones are going to make the job that much harder.
But, creative ways have to be found to promote healthy food components. The message must be, as the old English proverb goes, "don't dig your grave with your knife and fork,"  or with your spoons and chopsticks.