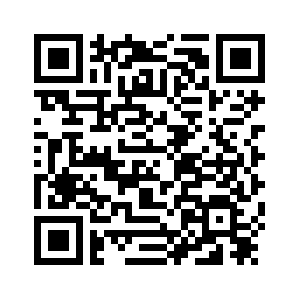 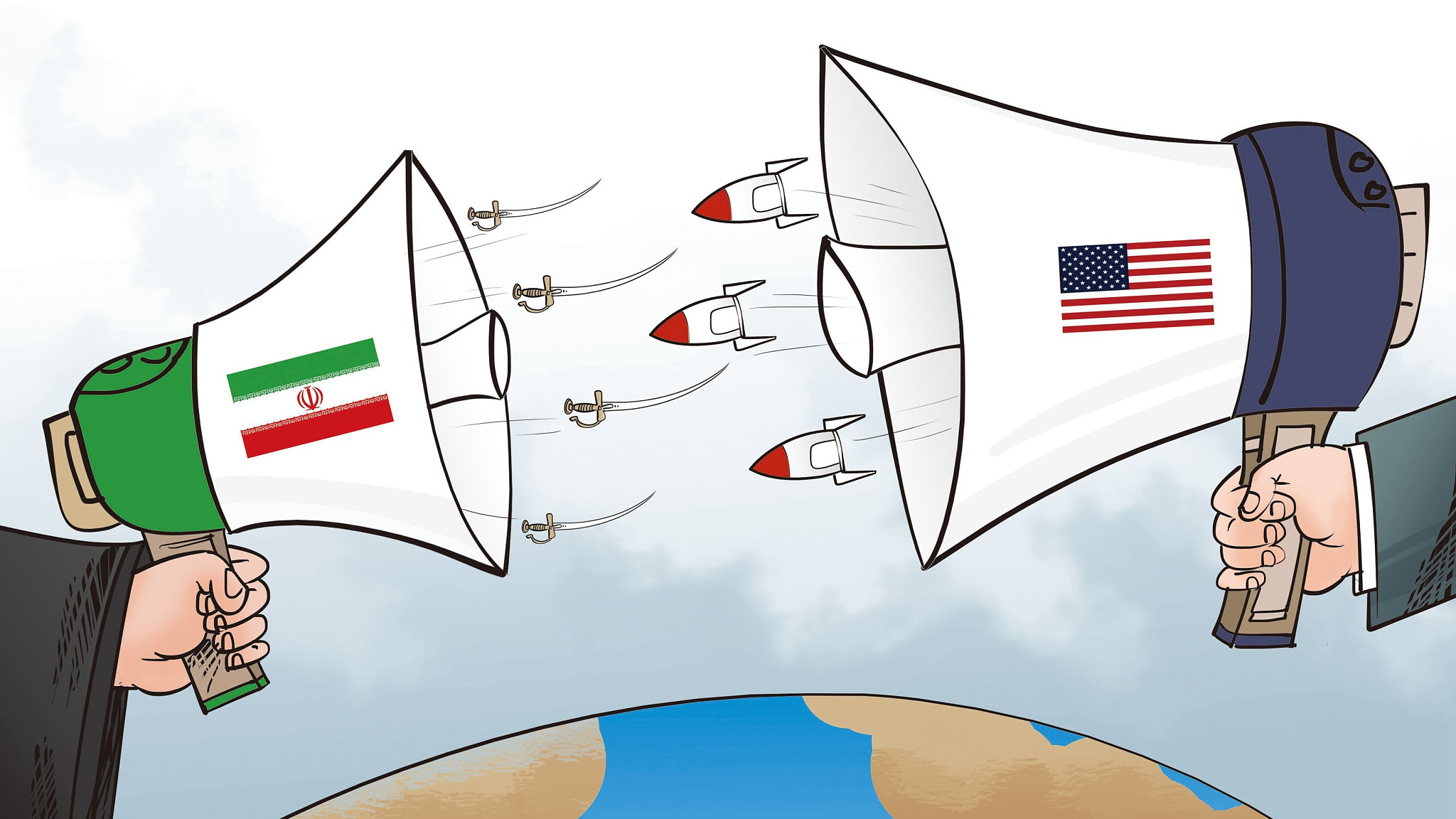 Editor's Note: Tom Fowdy is a UK-based political analyst. The article reflects the author's views, and not necessarily those of CGTN.
At the end of this week, the US will impose a sweeping set of unilateral measures on Iran targeting the country's key sectors, including shipping, finance, and petroleum. Donald Trump concurrently posted up a self-appraising graphic on twitter saying "sanctions are coming."
He would later claim in his typical tone of exaggeration that the sanctions would be the "strongest ever imposed" on Iran, despite the fact they are not endorsed by the international community and therefore, are weaker than the ones implemented by the UN in the build-up to Obama's 2015 breakthrough nuclear agreement.
With such measures concurrently lacking any mandate in international law beyond the will of the US, they must be called out for what they are, illegitimate and illegal.
Trump's blatant disregard for the Joint Comprehensive Plan of Action (JCPOA) is a violation of international law. The original deal was signed by a number of partners including the European Union, China and Russia. 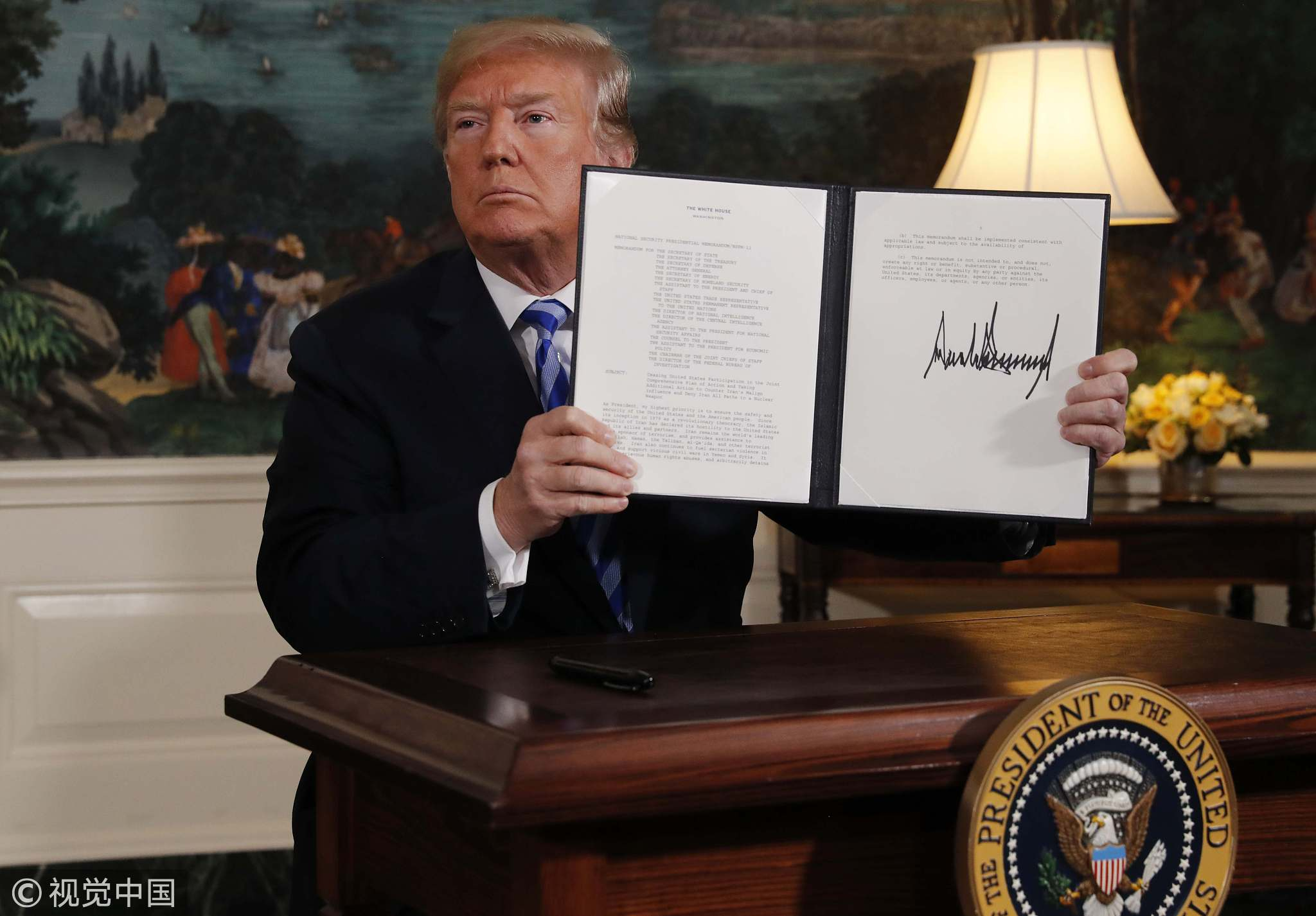 US President Donald Trump displays a presidential memorandum after announcing his intention to withdraw from the JCPOA at the White House in Washington, DC, US, May 8, 2018. /VCG Photo

US President Donald Trump displays a presidential memorandum after announcing his intention to withdraw from the JCPOA at the White House in Washington, DC, US, May 8, 2018. /VCG Photo

Various international organizations, such as the International Atomic Energy Agency (IAEA) and the UN, repeatedly verified that Tehran was sincerely upholding their side of the deal. There was no cheating, they had genuinely ceased any inclinations of a nuclear program and earned lifting of multilaterally imposed measures in a 2016 review period which followed the deal.
In all incidences related to this matter, Iran was following international law as requested. Thus, by condemning it on a number of unfounded and opportunistic allegations in order to withdraw on unilateral grounds, the US is subsequently a violator.
None of Trump's "justifications" for scrapping the deal should be taken seriously and let me explain why.
Firstly, he has cited "terrorism". This is at best low-hanging fruit, based on a lazy, simplified and prejudiced stereotype of fundamentalist Islam, easily bought by the public. 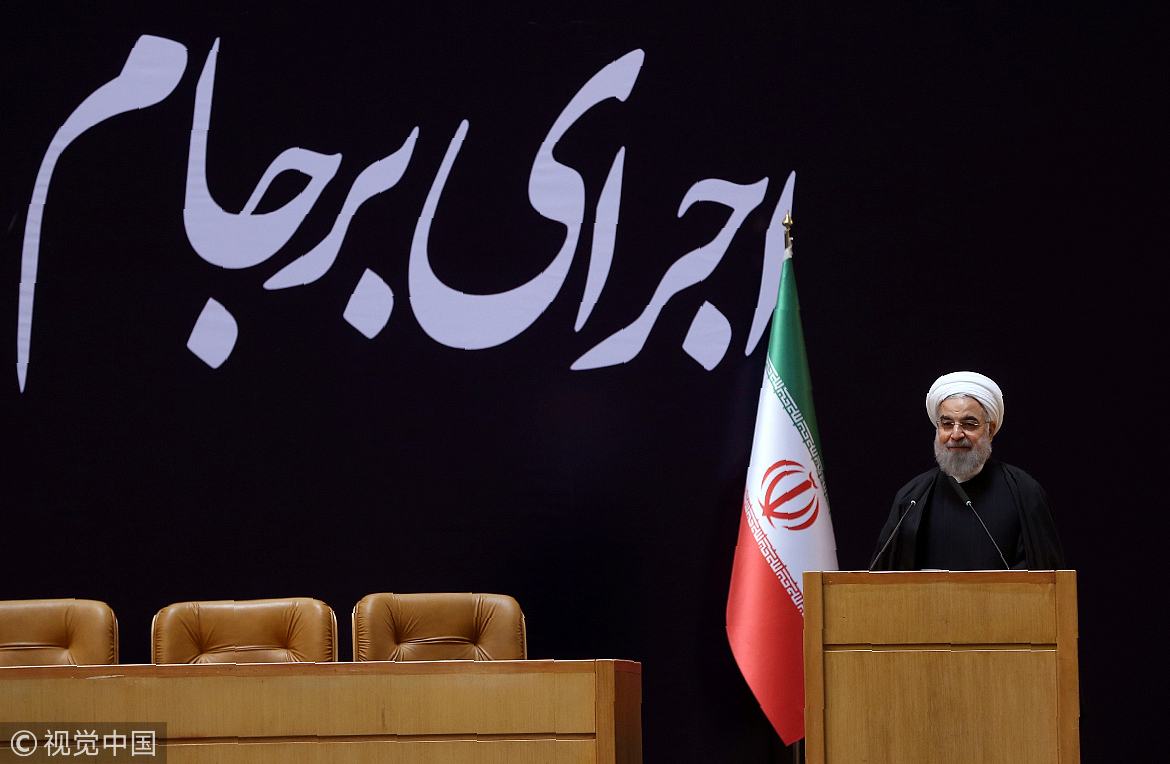 Although Iran has funded the Shia extremist group Hezbollah, which is active in Lebanon and in the Syrian war, Hezbollah has not initiated any kind of terrorist attack on western soil or targeted civilians.
Rather, such attacks and related groups have been strictly rooted in the Sunni ideology and derive from the spread of Wahhabism, which ironically is related to US ally Saudi Arabia.
Secondly, Iran's ballistic missile program has also been cited. Ballistic missiles were not included in the original agreement and therefore, they cannot be used as a justification to withdraw from it.
It should be noted that there are no restrictions in international law concerning the development of non-nuclear missile technology.
Thirdly, when the US and Israel claimed that Iran has been cheating on the deal and secretly enriching uranium, it was nothing more than propaganda which contradicted the findings of internationally approved experts on the matter.
There are all in all, no legitimate grounds for withdrawing or re-imposing sanctions. 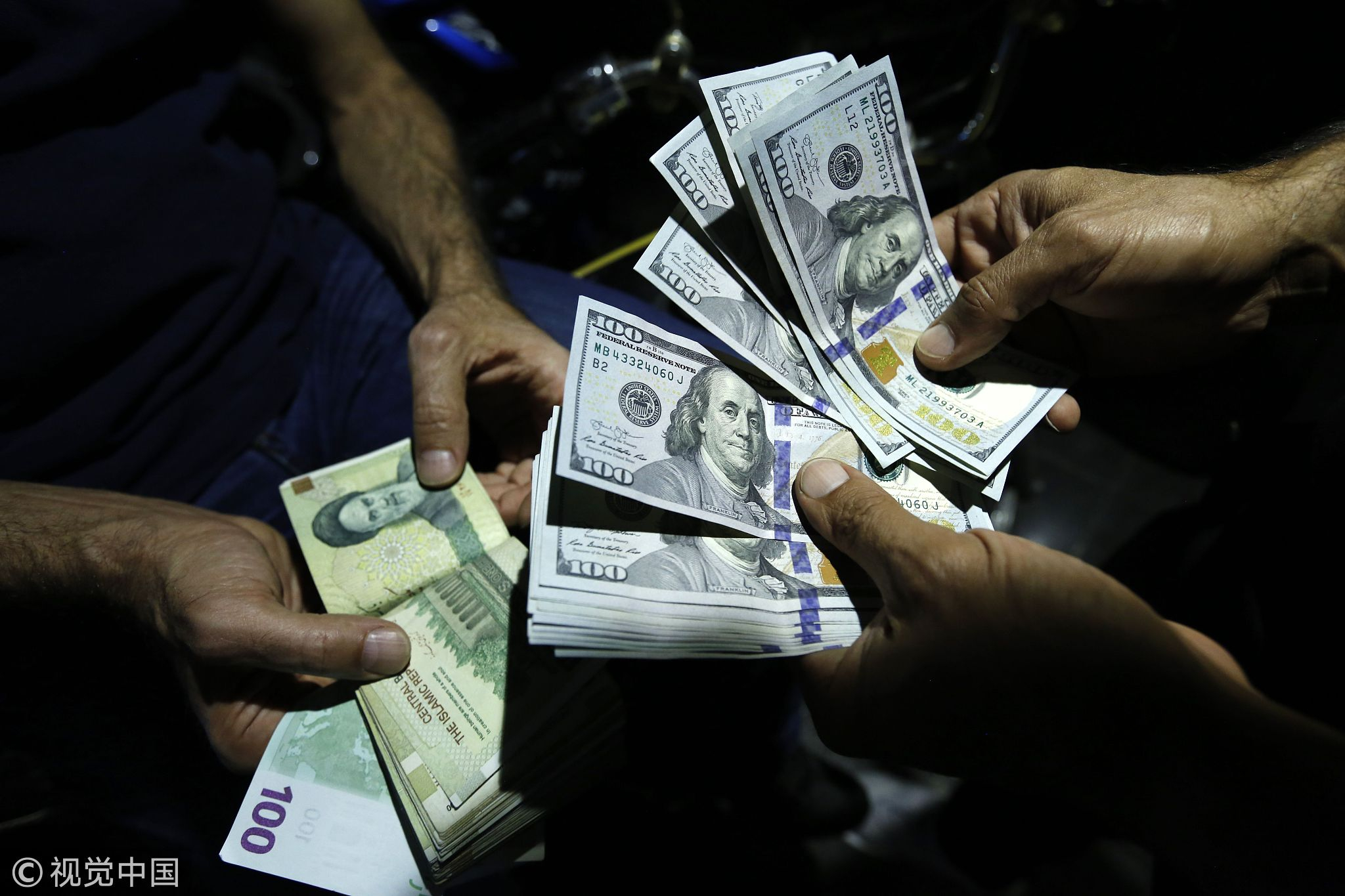 Iranian rials and US dollars at an exchange shop in the Iranian capital Tehran, August 8, 2018. /VCG Photo

Iranian rials and US dollars at an exchange shop in the Iranian capital Tehran, August 8, 2018. /VCG Photo

This places roadblocks on what the US can actually achieve by going down this route. Trump's talk of the measures being the "strongest ever" is sheer ridiculousness, given the obvious lack of multilateral support for his ideas.
US allies in Europe simply refused to endorse the sanctions. Rather than capitulate to the unilateral demands of Washington, the EU has instead chosen to set up a payment system to bypass the stipulations.
Similarly, the US has also had its arm twisted to grant waivers to a number of other countries reliant upon Iranian petroleum imports, this includes India, Turkey and the Republic of Korea (ROK). At the same time, the US Department of theTreasury has also expressed that its ability to limit Iranian oil via sanctions cannot be maximized due to needing to maintain a stable global oil market price.
While US sanctions may still serve to act as a deterrent for many banks and investors, nevertheless, the reality of it hardly reflects the toughness that Trump claims it to be. Quite the opposite, it will not be enough to make Iran capitulate. 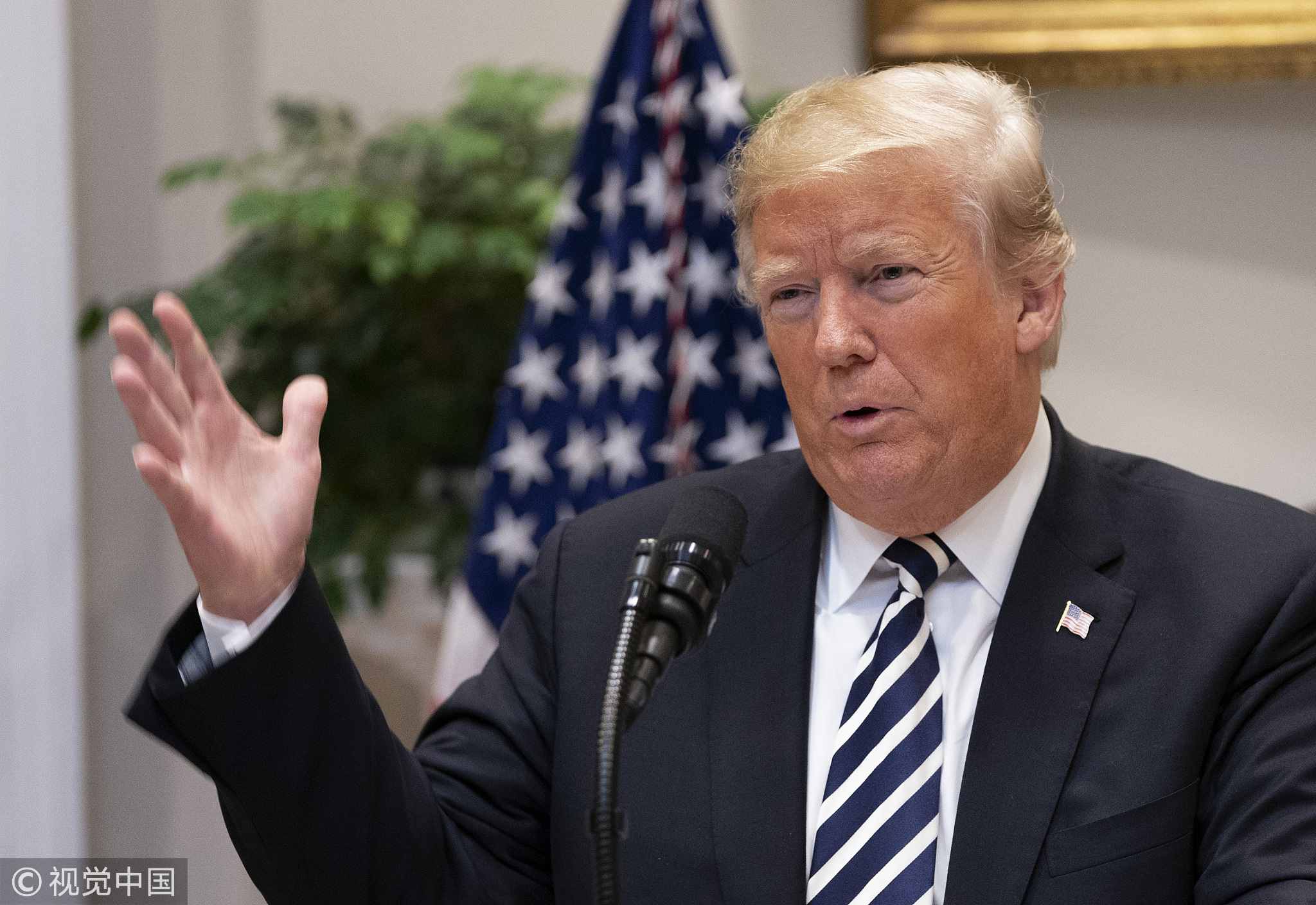 US President Donald Trump remarks on the illegal immigration crisis and provides an update on border security at the White House in Washington, DC, November 1, 2018./ VCG Photo

US President Donald Trump remarks on the illegal immigration crisis and provides an update on border security at the White House in Washington, DC, November 1, 2018./ VCG Photo

Consequentially, the international community is right not to go along with it. Trump's withdrawal from the JCPOA is an act of unilateral recklessness and selfishness peddled upon mistruths and geopolitical preferences.
It stands as yet another dismissal of international law in the name of American exceptionalism and self-righteousness, built around fairy-tale bogeymen and exaggerated threats.
Washington's actions can only serve to raise unnecessary stakes for allies, make a mockery out of the non-proliferation regime and diminishes faith in multilateral institutions, all without solving a problem which never existed in the first place.
(If you want to contribute and have specific expertise, contact us at opinions@cgtn.com.)