Opinion: US should be working, not warring, with China and others
Harvey Dzodin 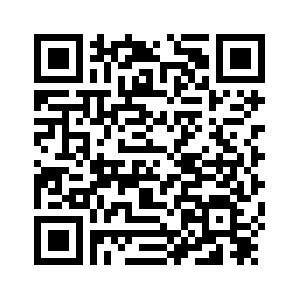 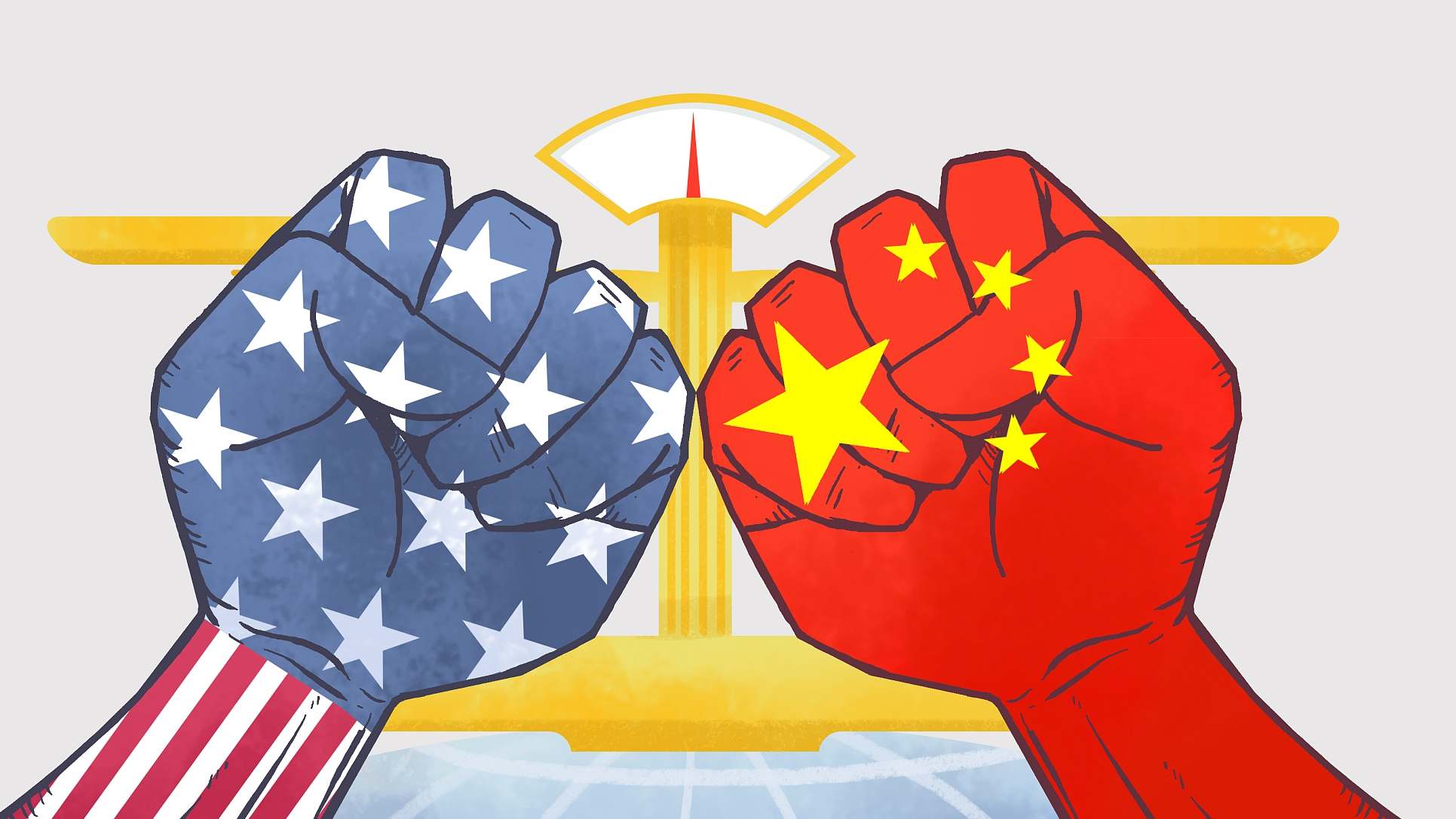 Editor's note: Harvey Dzodin is a senior research fellow at the Center for China and Globalization, and a former legal adviser in the Carter administration. The article reflects the author's opinion, and not necessarily the views of CGTN.
US President Donald Trump is on record saying that "trade wars are good and easy to win" and that he's a "very stable genius." With his imposition of 200 billion US dollars in tariffs on Chinese exports to the US effective this past Monday, we can conclusively add these two statements to the thousands of documented fake "facts" that Trump has made.
The truth is that aside from a few ivory tower extremist theorists with little or no real-world business experience, and who coincidentally happens to work in Trump's chaotic White House, mainstream economists and real business people leading small, medium and global businesses, say that Trump is shooting himself in the foot.
I'd say that he's shooting the American economy and the consumer in the heart. He's hastening the day when the exceptional US economic performance which began under US President Barack Obama and for which Trump falsely claims complete credit, will crash. 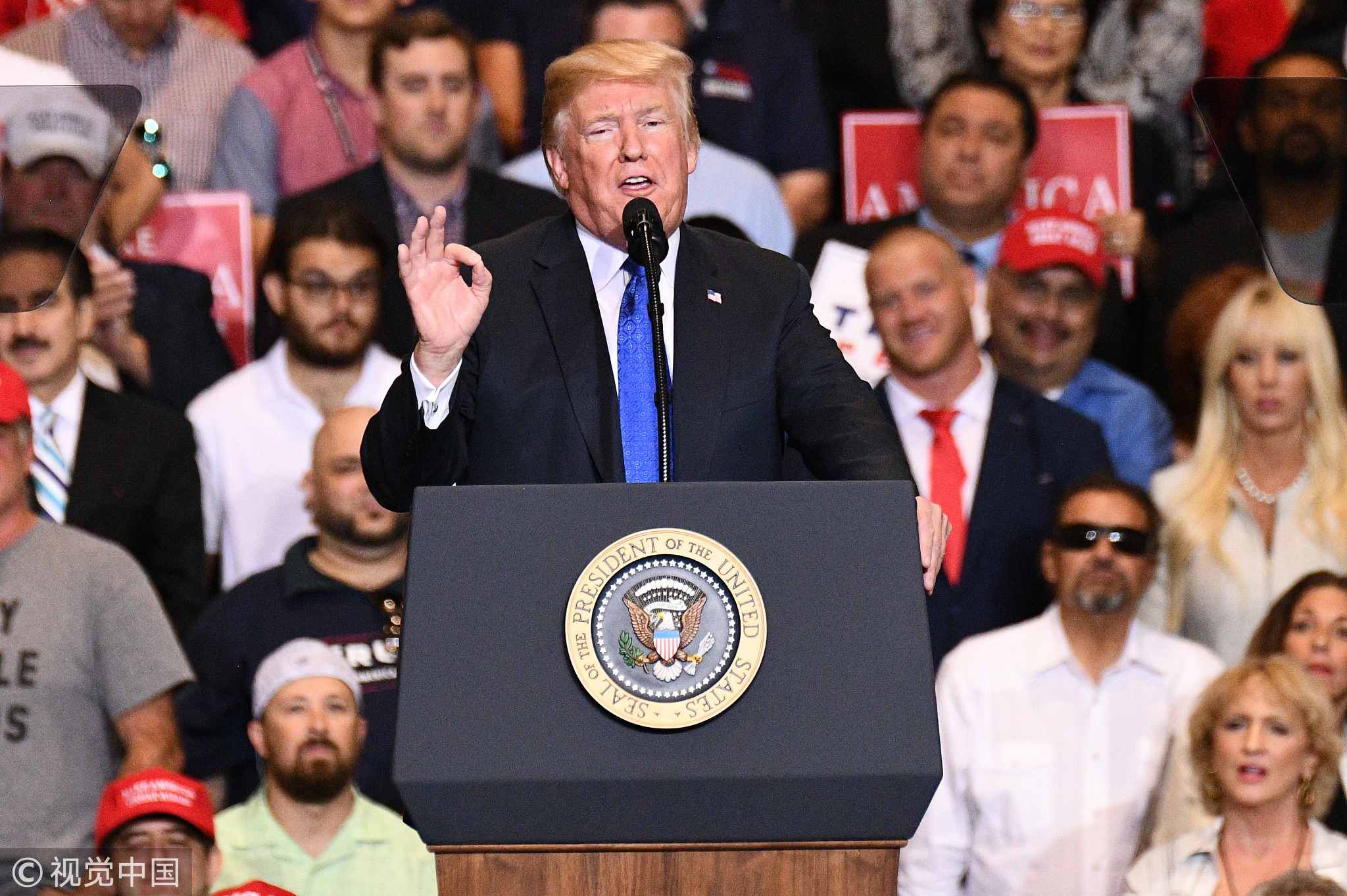 US President Donald Trump speaks during a rally in Las Vegas, US, September 20, 2018. /VCG Photo

US President Donald Trump speaks during a rally in Las Vegas, US, September 20, 2018. /VCG Photo

And the situation is likely to deteriorate even further. Goldman Sachs has just raised to 60 percent the probability that Trump will tariff all Chinese exports to the US; that's on 517 billion US dollars' worth of goods.
To prove Goldman's point that the situation is deteriorating, over the weekend the Chinese side canceled upcoming scheduled bilateral trade talks claiming bad faith on the part of the US for imposing the additional 200 billion US dollars in tariffs on Chinese goods.
Given that Trump wouldn't have attended the meeting and is the sole decision-maker, it's a prudent decision.
On the same day, the additional tariffs were imposed, the State Council, China's cabinet, issued a white paper accusing Trump of bullying and economic intimidation, as well as greatly undermining bilateral economic relations and putting the global multilateral trade system at risk. It called on both parties to cooperate.
This is not a one-sided issue. However, I'm not saying that the American side's objections to the Chinese trade policies are spurious. They have legitimacy. China has long engaged in misappropriation of US intellectual property and being overly protective of some industry sectors. 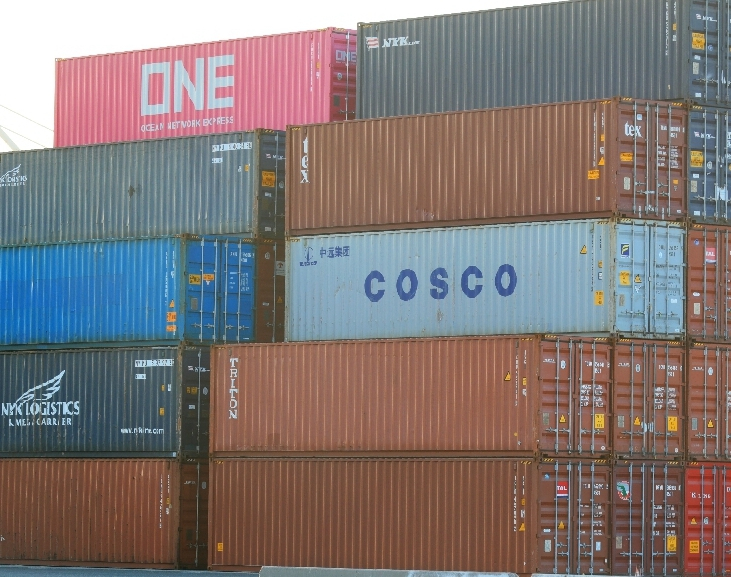 A container of China COSCO Shipping Corporation Limited is seen at the Port of Long Beach, Los Angeles, US, Aug. 23, 2018. /Xinhua Photo

A container of China COSCO Shipping Corporation Limited is seen at the Port of Long Beach, Los Angeles, US, Aug. 23, 2018. /Xinhua Photo

But there are institutions to handle such disputes such as the WTO and bilateral negotiations. From living in China for so many years, I know that Trump has put China in a position where it can't and won't back down.
This is not about a simple-minded real-estate transaction, some of which Trump poorly botched to the detriment of his investors, bankers and suppliers－whom he repeatedly stole from－about the world's economic future.
In a way, history is repeating itself. At the beginning of the Industrial Revolution, the British stole mass production, such as the state-of-the-art manufacturing technology from Italy.
In turn, later the US stole IP from the Brits. It's not right, but it's a familiar path trodden by developing economies.
But I think, with all his support from US Evangelicals, it's churlish of Trump not to follow the biblical admonition that "let he who is without sin, cast the first stone."
Also, Trump is demagoguing the issue in other ways. He has never mentioned that in the fast-growing service sector, the US runs a growing surplus with China－38 billion US dollars in 2016, more than double the 16.5 billion US dollars five years earlier.
Trump's advisers better tell him that it's one of the many nontariff tools that China might exploit if Trump insists on a further escalation of the dispute. And they should remind him that the Chinese side has thousands of years of bureaucratic experience and knows all the tricks.
It'll be more like the Chinese side shooting fish in a barrel than the US cake-walk Trump expects. The bottom line, however, is that in trade wars there are no ultimate winners. Think the Great Depression and the 1930s.
Trump is oblivious to the fact that the manner in which trade surpluses and deficits are determined does not fit with our interdependent, globalized world economy.
Take my iPhone 7, for example. It's likely to be included in the final round of tariffs now under internal White House review to tariff all Chinese goods, along with a myriad of other mobile devices, computers, and electronics which are treated similarly for tariff purposes. 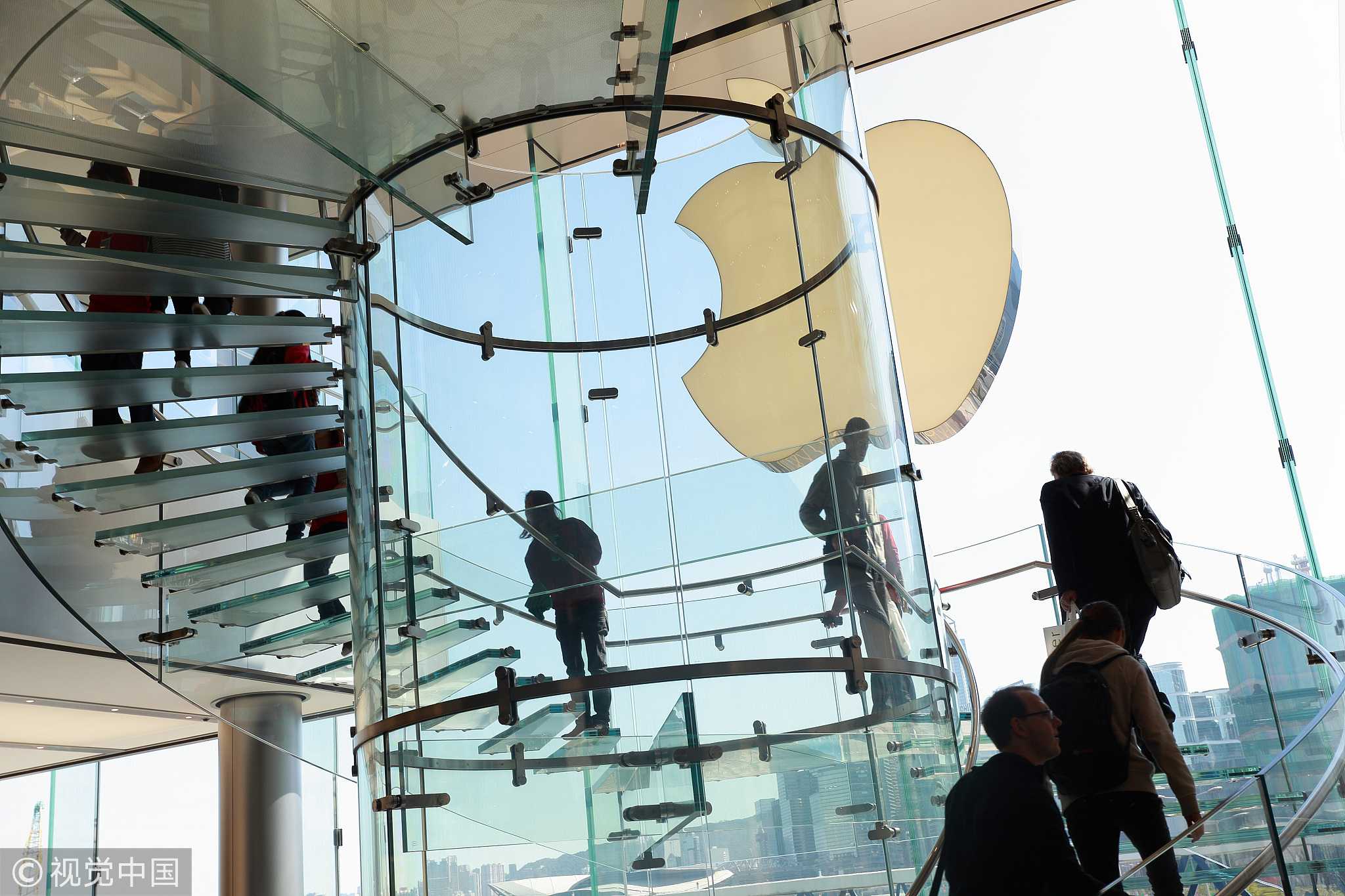 The iPhone 7 is booked as a Chinese import at the factory price of roughly 240 US dollars for tariff purposes, but the actual Chinese contribution is less than four percent, consisting of assembly cost plus battery.
Parts come from all over with the lion's share from the US and Japan, yet China is recorded as contributing to the trade surplus at 240 US dollars. So the real value China added of less than 10 US dollar is negligible.
Researchers have found that although not as extreme as the iPhone 7 example, likely one-third of the 2017 Sino-US 375 billion US dollar's trade deficit should not be attributed to China. This 125 billion US dollars downward adjustment is hardly chump-change.
The US should be working, not warring, with China and others to bring these measures into the 21st-century globalized world.
In announcing the latest round of tariffs now in force as of Monday, Trump said that "It will be a lot of money coming into the coffers of the United States of America." Trump's mind must have drifted off as he didn't finish the thought that this money would be a tax on the affected American consumers and businesses. 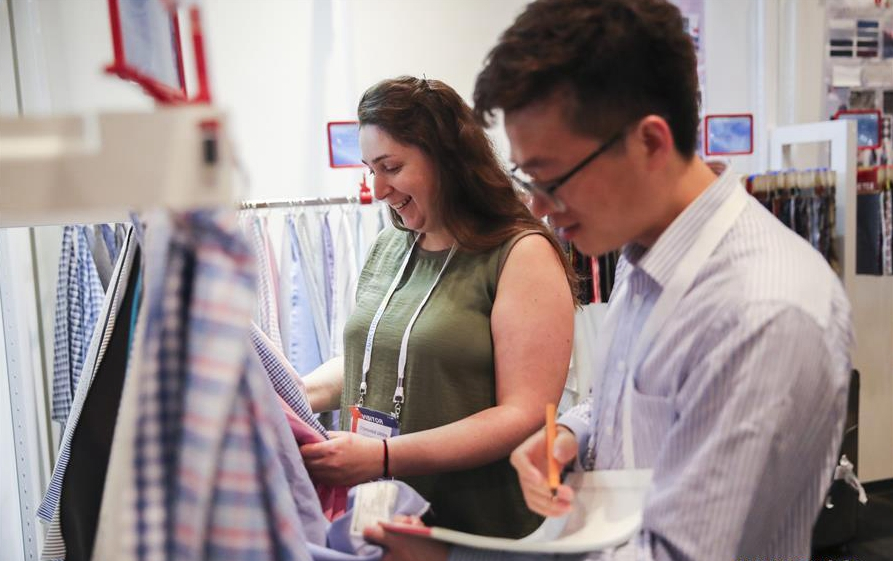 An American buyer looks at exhibits of a Chinese fabric producer at the Chinese Textile and Apparel Trade Show in New York, US, July 23, 2018. /Xinhua Photo

An American buyer looks at exhibits of a Chinese fabric producer at the Chinese Textile and Apparel Trade Show in New York, US, July 23, 2018. /Xinhua Photo

According to the vast majority of the recent testimony about the 200 billion US dollars in additional tariffs from individuals and businesses at all levels, the tariffs will make US products less competitive, cost consumers more and create not only the loss of American jobs but also business bankruptcies.
It can have other unintended consequences that any stable genius could not fail to have foreseen easily. One of Trump's stated reasons for the tariffs is to punish the Chinese for IP theft through fake luxury goods.
The latest round of tariffs now in effect includes bags, accessories, and hats in addition to fur and leather materials. A Washington Post investigative report from last week concluded that “it's a good time to work in the fake handbag business" because these fakes enter the US through, let's say, different channels than the official import channels through which the real ones do.
The fakes don't pay the tariffs so the price difference in favor of the fakes is even greater and their purchasers by definition are highly price-sensitive. No wonder Trump hates Jeff Bezos, the owner of the newspaper for discovering the truth about the fake products given a huge boost by the president.
(If you want to contribute and have specific expertise, please contact us at opinions@cgtn.com.)