Life on Plateau: The lonely wanderer on the wasteland
By Zhao Ying 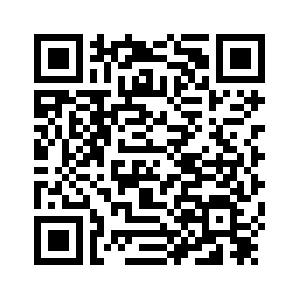 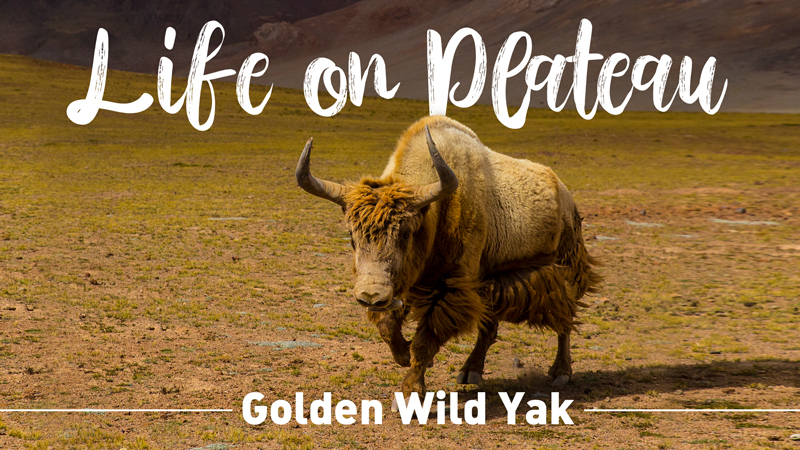 For herders on the Qinghai-Tibet Plateau, yaks mean everything. The tough dried yak meat, fresh yak milk and yak butter tea provide most of the protein and fat in food for the locals. Even yak dung can be used as organic fuel.
The yaks that live closely with herders are called domestic yaks. Different from their ancestors – wild yaks, domestic yaks are smaller in size. While a male domestic yak weighs about 350 to 585 kilograms, a male wild yak can weigh up to 1,000 kilograms, almost the double. 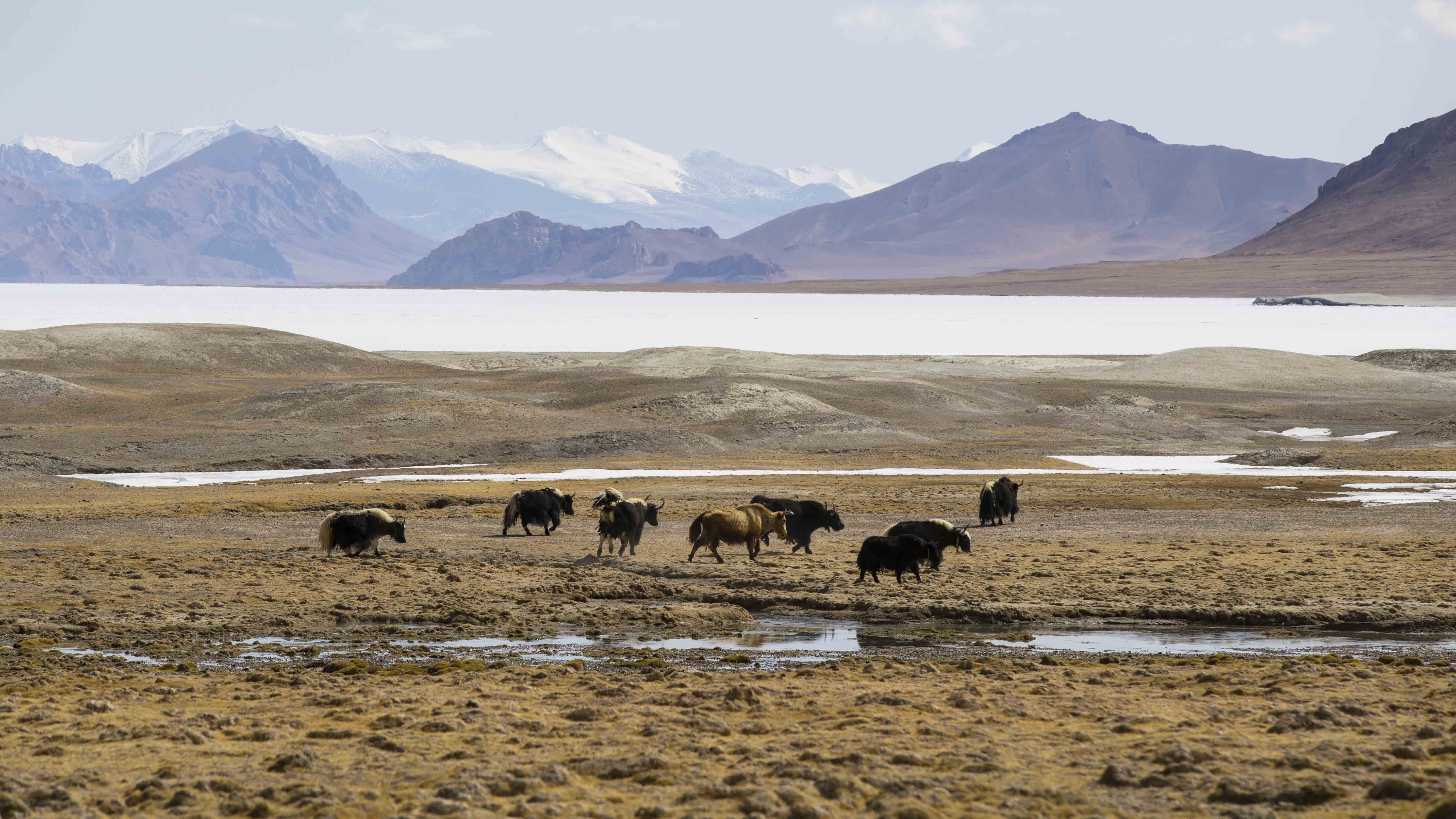 Domestic yaks near a lake surrounded by mountains. /Courtesy of director Ka Bu

Domestic yaks near a lake surrounded by mountains. /Courtesy of director Ka Bu

Domestic yaks, commonly seen on roads or at tourist attractions, often have diverse colors, ranging from black to brown, white or even pied. In contrast, the color of a wild yak is mostly jet black. Only a small group have the shining golden brown color, thus named golden wild yak.
With a shoulder height of 175 to 203 centimeters, the bulky golden wild yak has dense long hair hanging down almost to the ground, as if wearing a huge blanket with tassels to keep them warm on the cold plateau. 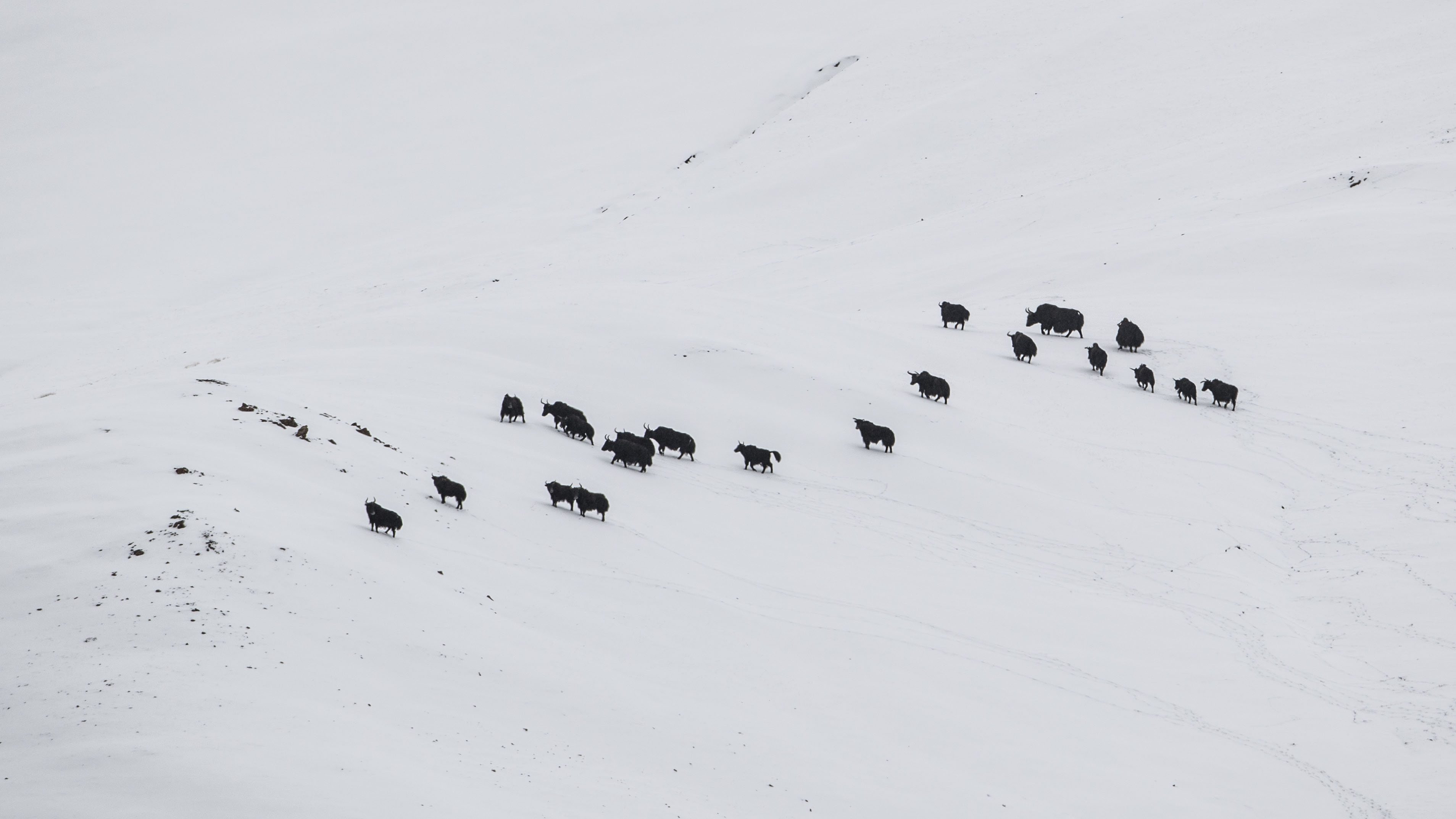 According to director Ka Bu, whose documentary crew filmed the creature in 2016, golden wild yaks are only distributed in Rutog and Gegyai counties of northwestern Tibet, at the altitude of almost 5,000 meters. They sometimes live together with their black relatives.
On the flat terrain, the male golden wild yak is often seen wandering alone. In comparison, the female would lead a larger group with children and elderly walking on the steep mountain slope, where there are more grasses and sedges to forage. 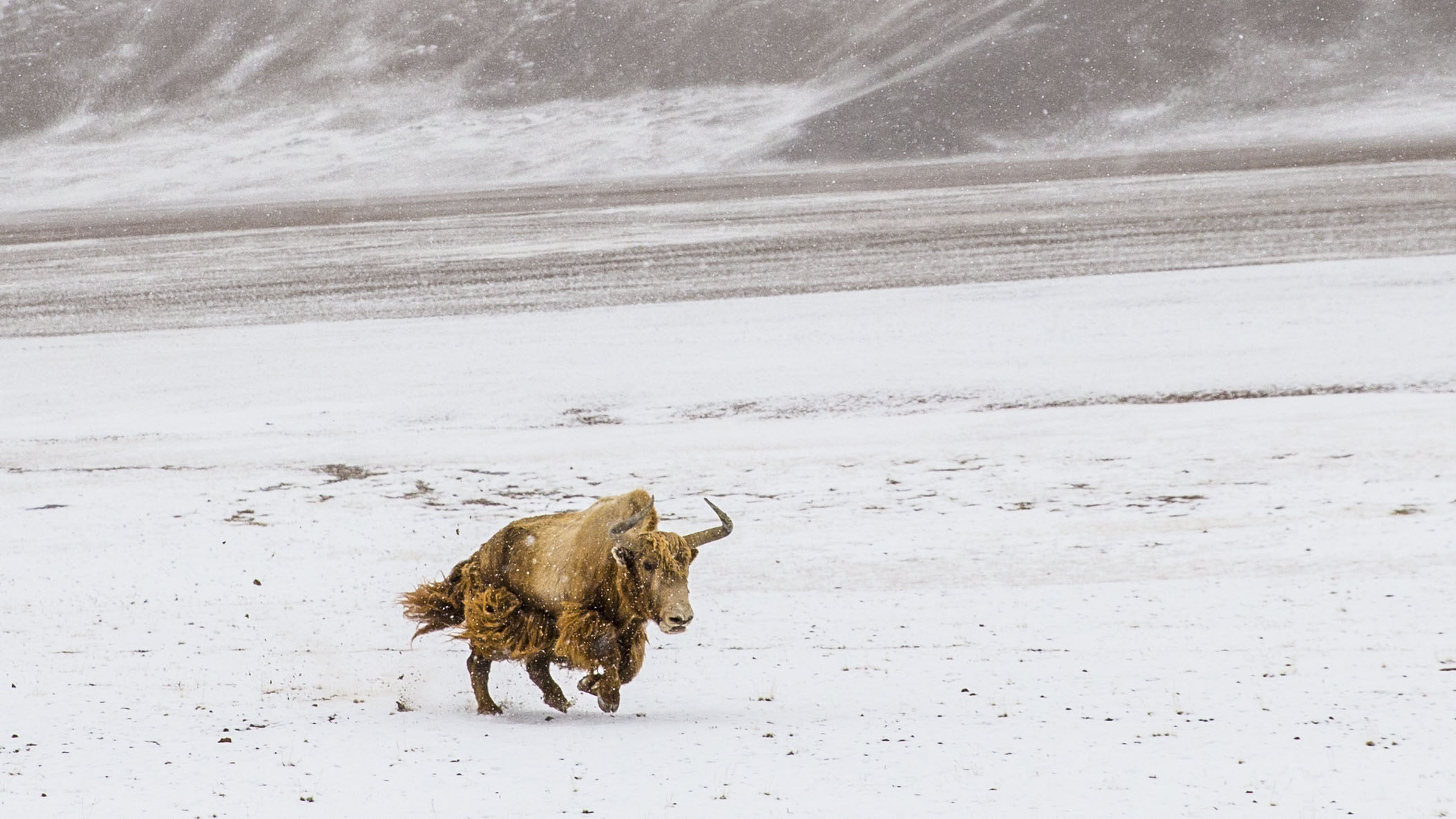 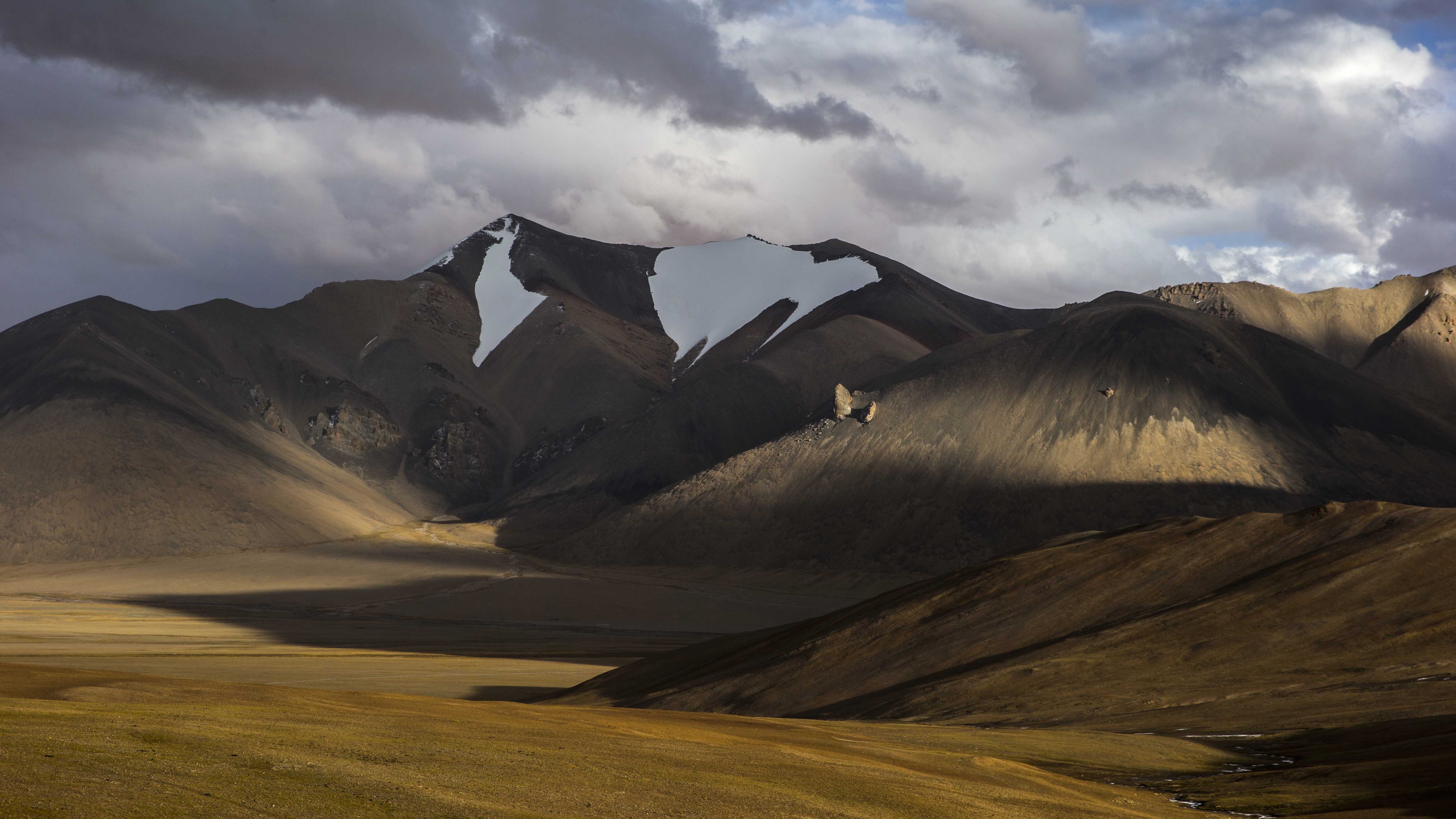 Nowadays, the number of wild yaks is already scarce, recorded 10,000 in 2018. The population of golden wild yaks is even less, at the most 300, which makes it critically endangered.
To protect this first-class protected animal, the local forestry bureau has rented over 60 square kilometers of meadows from herders since 2016. Herders are compensated by the local government for resettling elsewhere and raising less livestock. About 780 farmers and herders are also hired as wilderness rangers to patrol in the reserve every day. 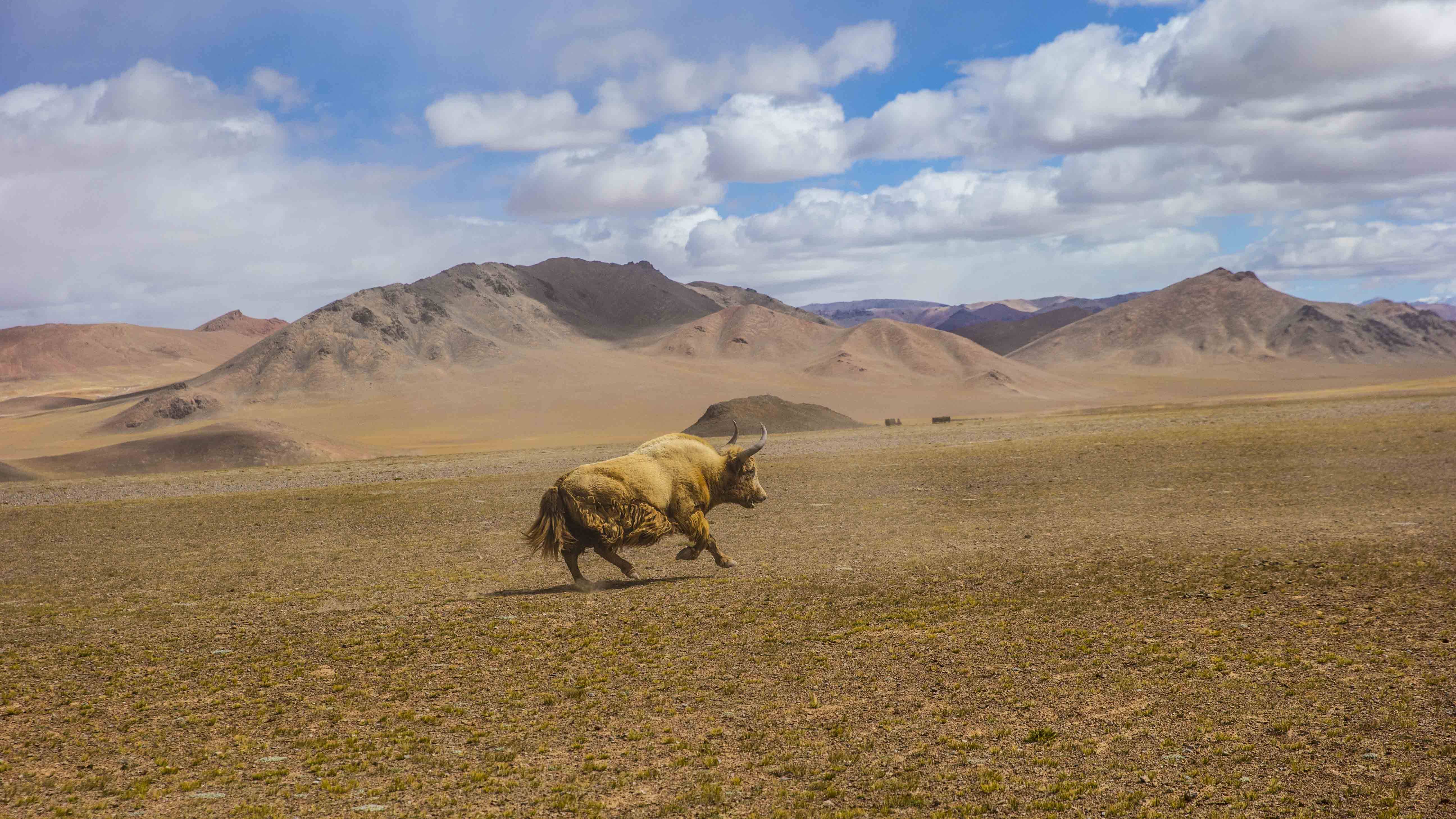 A running golden wild yak on the plateau. /Courtesy of director Ka Bu

A running golden wild yak on the plateau. /Courtesy of director Ka Bu

It is said that the wild yak was domesticated around 5,000 years ago by the ancient Qiang people. The domestication gave Tibetan people abundant living resources and enabled their population to grow rapidly. The ancient "golden treasure" should be cherished for whatever reason.
(Video and cover photo provided by director Ka Bu, cover photo designed by CGTN's Liu Shaozhen)
(If you want to contribute and have specific expertise, please contact us at nature@cgtn.com.)