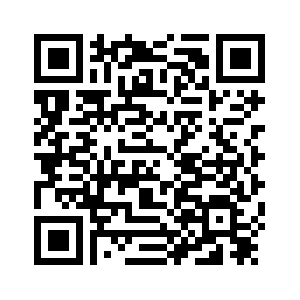 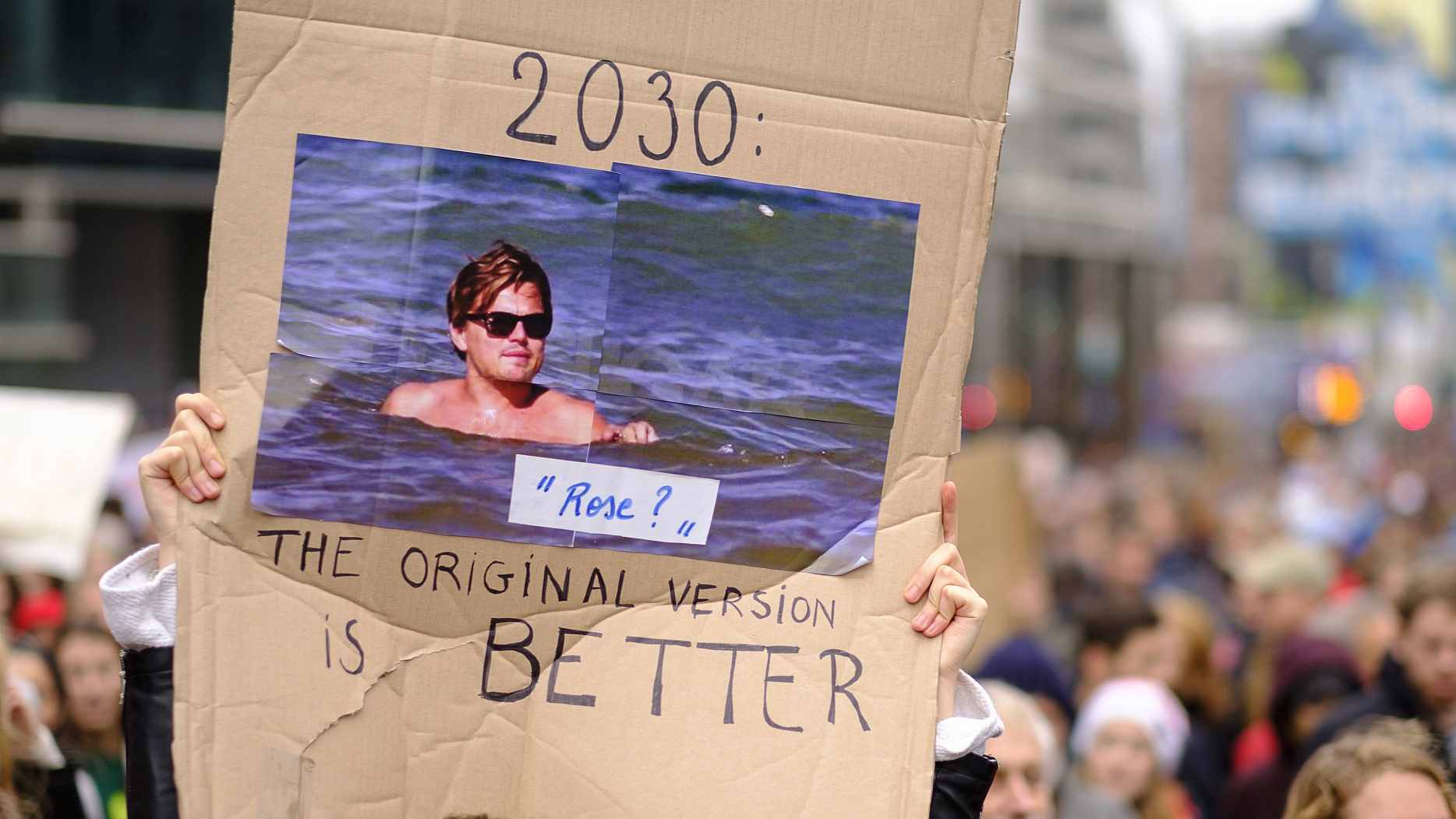 ‍Editor's note: Wu Changhua is the Executive Director of Professional Association for China's Environment. The article reflects the author's views, and not necessarily those of CGTN.
This week, climate change negotiators from around the world gather once again to advance the global climate change agenda. The 24th Convention of the Parties (COP24) to the UN Framework Convention on Climate Change (UNFCCC) began on December 2 in Katowice, Poland.
A major focus this time is to agree on the rule book of the Paris Agreement, a successful product of the COP21 achieved in Paris in 2015. Countries signed up to the Paris Agreement have committed to making steadfast and even more aggressive efforts to reduce greenhouse gas emissions. China, as the world largest developing country and emitter, has committed to capping its emissions no later than 2030. 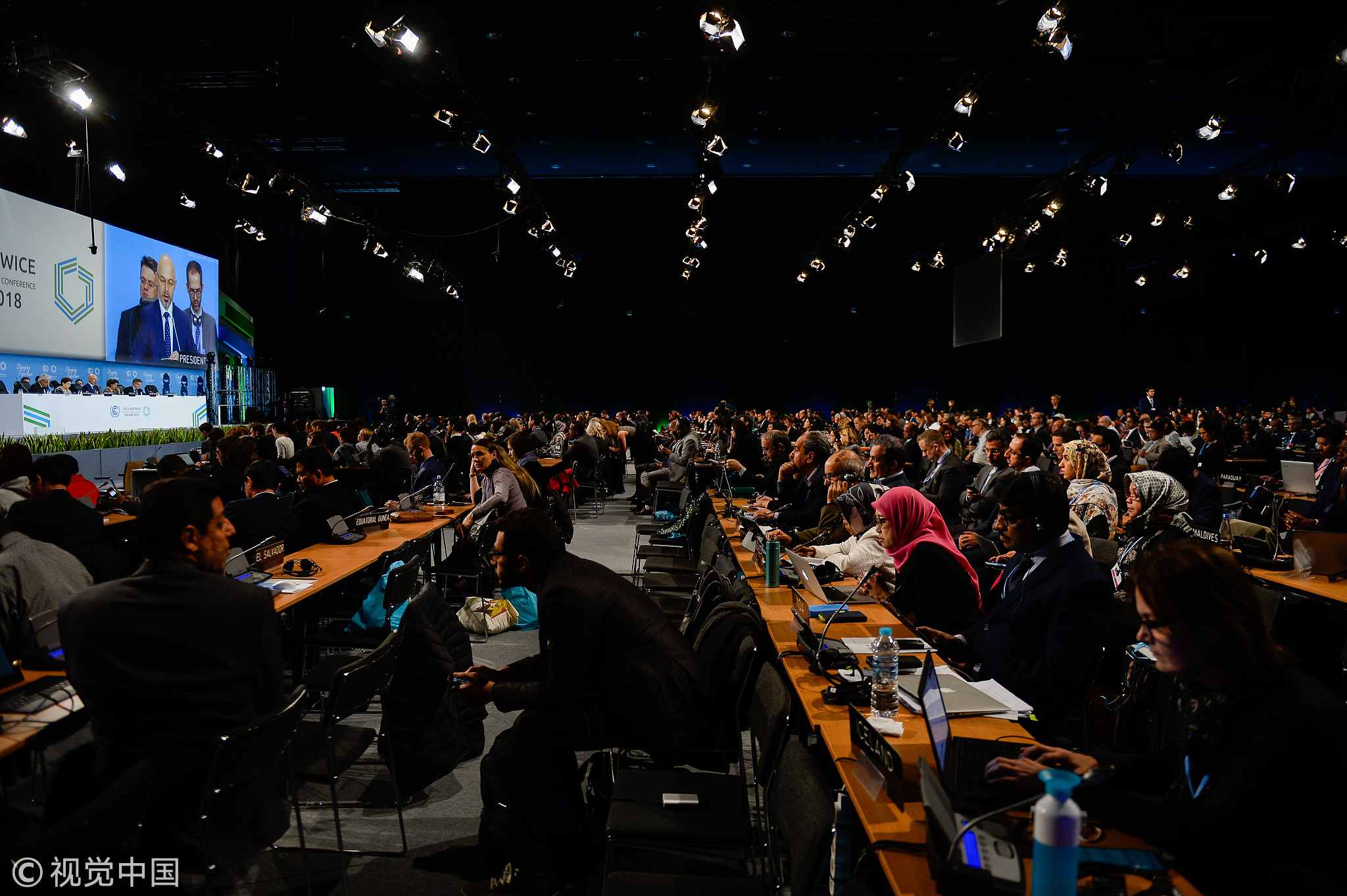 But recent scientific assessment sends a more alarming message that humanity needs to accelerate its actions in order to control climate impact within a reasonable reach. The Intergovernmental Panel on Climate Change (IPCC) special report on global warming aims to alleviate the negative impacts of global warming of 1.5 degrees Celsius above pre-industrial levels.
According to the report,  global emissions shall be cut in half by 2030 and achieve net zero emissions by 2050. Otherwise, human development will be greatly compromised by extreme weather events, resulting in possible economic losses.
The recent California wildfire is a case in point to demonstrate how serious the situation is. Long-time drought contributed to the extended period of about two weeks of forest fires, a historic record in the region. 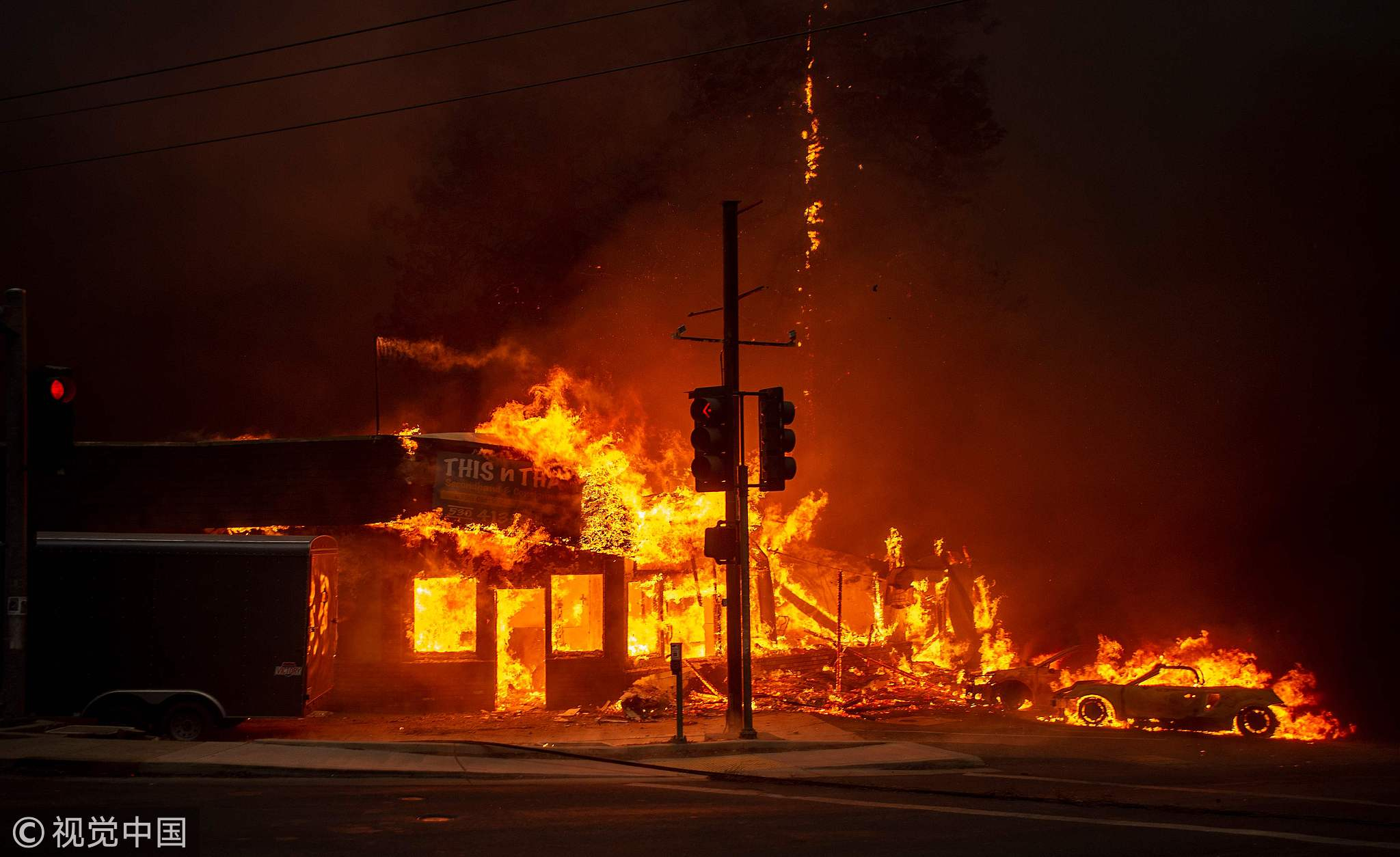 A store burns as the Camp fire tears through Paradise, California, the U.S., November 8, 2018. /VCG Photo

A store burns as the Camp fire tears through Paradise, California, the U.S., November 8, 2018. /VCG Photo

With 85 deaths, 249 lives still missing, and more than 19,000 buildings burned to ashes, many local residents became homeless and had to spend the Thanksgiving holiday with despair and heartbreak.
And very sadly, scientists are telling us that such disasters are expected to be the norm. And humanity has to learn how to adapt and recover quickly from such disasters.
The consequences, such as extreme weather events, are understood. Frequent and more intensive typhoons and hurricanes, as well as forest fires, rising sea levels, increased acidity of the oceans, which is destroying coral reefs and marine life, are the result of climate change.
Climate change is also threatening our water security, energy security and food security, while continuously damaging our infrastructure.  More immediate actions can lead to mitigation, in particular, emission reductions.
However, it is difficult to make progress in reducing greenhouse gas emissions. It is a constant battle between the incumbents and new forces. It requires balance and controlled transition from fossil fuel energy to low carbon energy in the future.
It also means risk and damage control, with a particular focus on how to minimize the negative impact of the stranded fossil fuel assets. 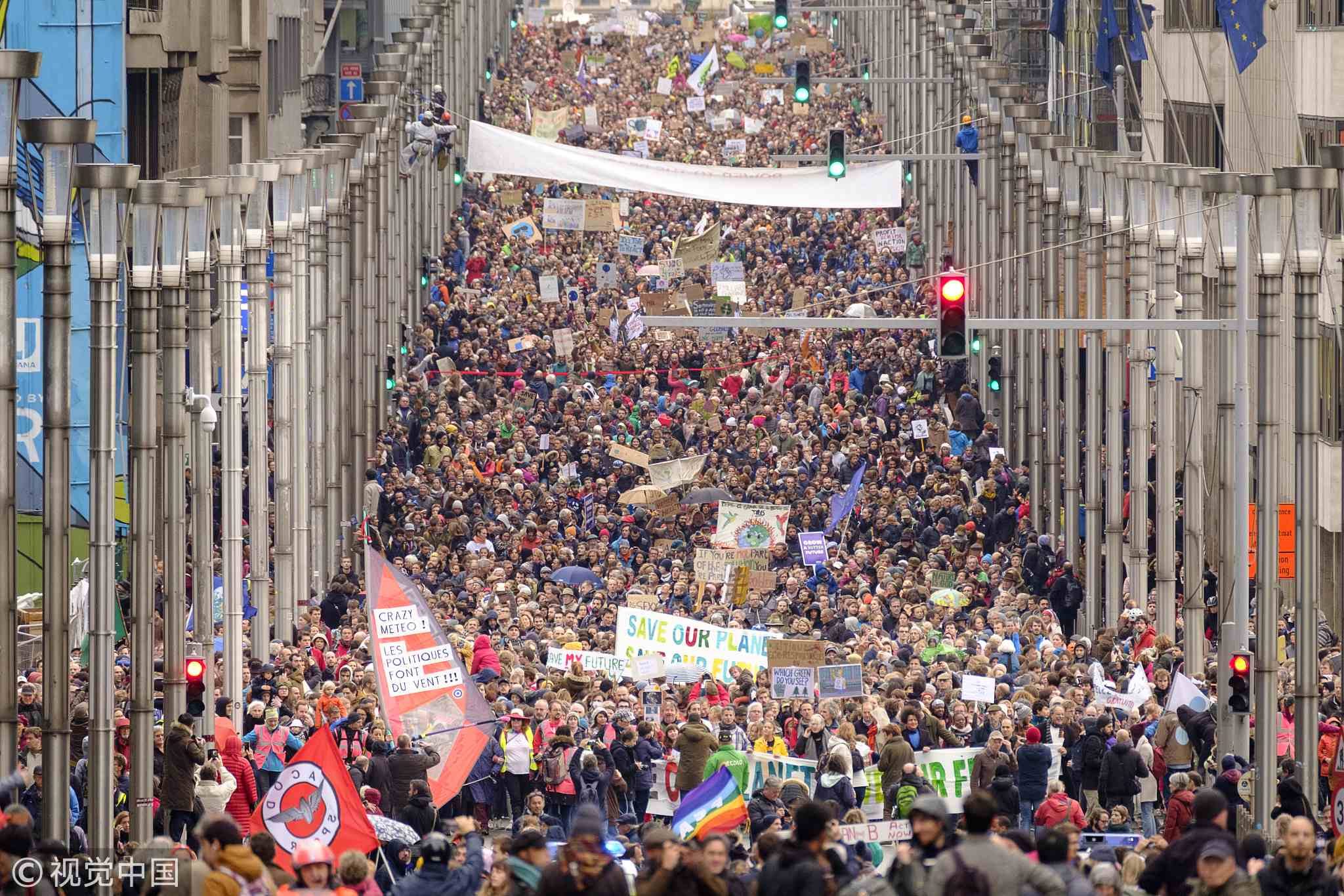 Demonstrators hold signs as they march in the main Brussels quarter during a 'Claim the Climate' march in Brussels, December 2, 2018.  /VCG Photo

Demonstrators hold signs as they march in the main Brussels quarter during a 'Claim the Climate' march in Brussels, December 2, 2018.  /VCG Photo

The future vision is very clear that human development has to quickly shift towards a net zero carbon energy future. In such a future, integrative design has a crucial role to play that prioritizes investment from conservation to energy efficiency, then to alternative renewable energy. We all know that technological progress has contributed to the energy transition from high carbon to low carbon.
Nevertheless, institutional and governance barriers challenge the effectiveness and enforcement of policy incentives to drive such a transition. It concerns pricing on carbon, which affects the incentives to promote the speed of transition, and of course, determines the emissions.
While we recognize the innovation and efforts in many parts of the world in emissions reduction, the reality constantly reminds us that we are not fast enough to meet up with the challenges.
And it should be known that merely reducing greenhouse gases emissions is not enough for fighting against climate change. On one side, accelerating actions to cap and reduce emissions are needed. On the other, adapting to the changes already happening is necessary. 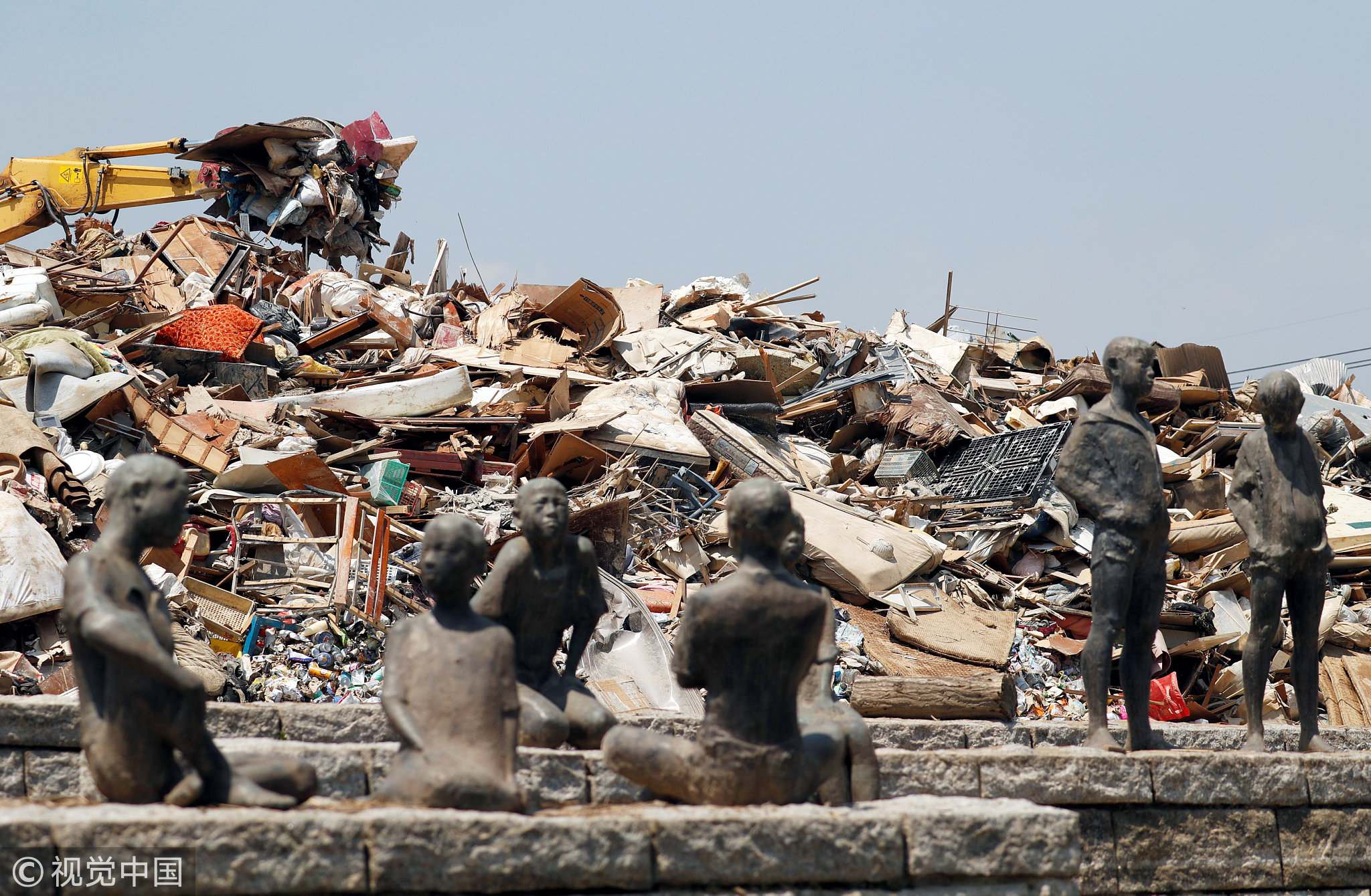 The recent California wildfire has probably taught people a lot of lessons, one of which is zoning of buildings, involving the distance between forests and buildings.
China often says that mitigation and adaptation should be hand in hand in order to fight climate change impact. While mitigation has mostly focused on the reduction of emissions, adaptation concerns a much larger scope of issues. It relates to water, energy, and food security, besides infrastructure.
It requires cross-sector, cross-departmental, and cross-regional coverage for effective decision-making and joint efforts to deal with foreseeable climate change impact. To tackle such a challenge requires a fundamental reshaping of our current institutional and governance structure and mechanisms.
Therefore, many measures should be taken to keep the Earth's climate within safe limits for future generations. The UNFCCC has succeeded in raising global awareness and understanding of climate change, as well as its impacts and actions required to address the challenge.
Never ever has humanity been empowered by policy will, societal aspiration and technology revolution to win the battle against climate change. What is inadequate is the pace and scale of actions.
China is embracing both UN Sustainable Development Goals (SDGs) and the 4th Industrial Revolution – the two deciding driving forces that are redefining and reshaping our future. In the clean energy revolution perspective, digitalization, energy storage, and materials are among the three most critical technology focuses, supported by integrative design.
In regards to the marketplace, laws, regulations, and other policy incentives are creating the world's largest clean energy production and consumption market. In addition, China is focusing on the circular economy, green procurement, and green smart cities that drive systemic change.
While governments and business bear the most of responsibilities, consumers also have a key role by deploying the purchasing power to drive the innovation and revolution of products and services that have to apply life-cycle and industrial ecology in product and service designs.
The world faces unprecedented challenges today, but it is also the best time for transition. UN SDGs lay a solid foundation for global efforts towards a sustainable future. The 4th Industrial Revolution offers the best technological capability to tackle global challenges.
The awareness and aspiration for change in society are stronger than ever for a smart and clean future. The one thing to change is acceleration in partnership!
(Cover photo: Demonstrators hold signs as they march in the main Brussels quarter during a 'Claim the Climate' march in Brussels, December 2, 2018. /VCG Photo)
(If you want to contribute and have specific expertise, contact us at opinions@cgtn.com.)