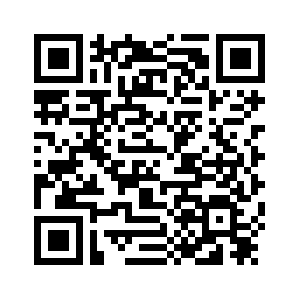 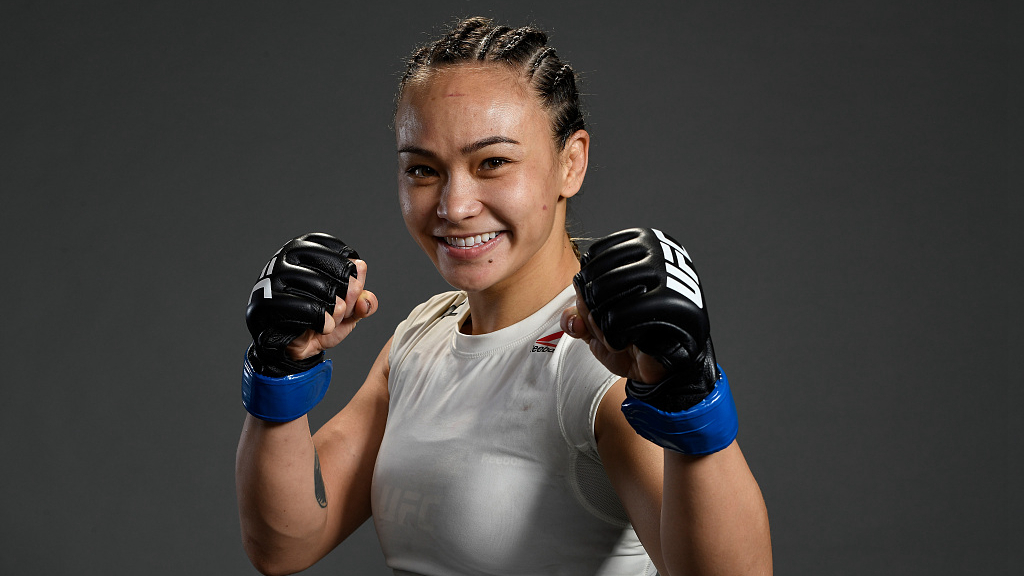 In a recent UFC Fight Night in Philadelphia, the American Mixed Martial Artist (MMA) Michelle Waterson defeated Karolina Kowalkiewicz of Poland in a women's strawweight bout, taking two steps forward to rank No.7 in her division.
The beaming beauty gave birth to a girl eight years ago, but always maintained her competitiveness on the fighting stage. She won the all-women's Invicta FC Atomweight Championship in 2013 and joined the UFC in 2015. Up to now, she has a record of five wins and two losses in the octagon, including the defeat to current women's strawweight champion Rose Namajunas.
At the beginning of 2019, Waterson and her family were invited by Chinese MMA pioneer promoter "Joe" Qiao Bo to a trip to China. She visited the Shaolin Temple in Henan Province among numerous other scenic spots and spent her 33rd birthday with fans in Beijing.
The following is an exclusive interview with Waterson, in which she talks about her Asian martial arts background and her Chinese travel journey. 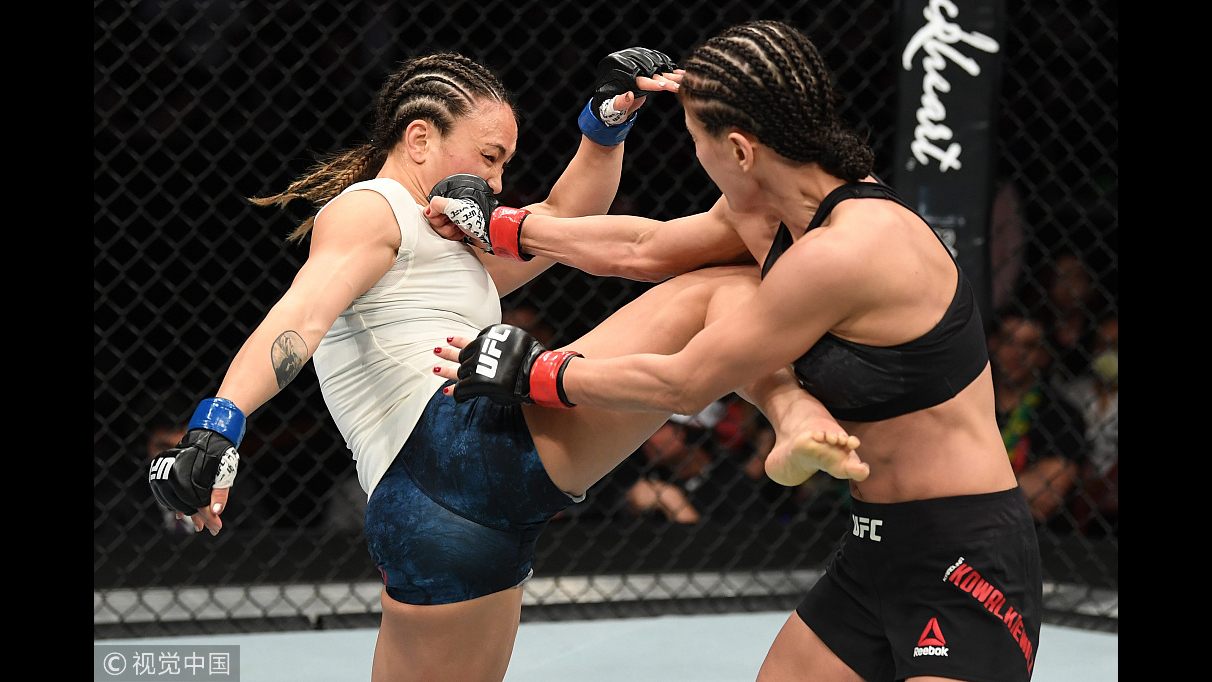 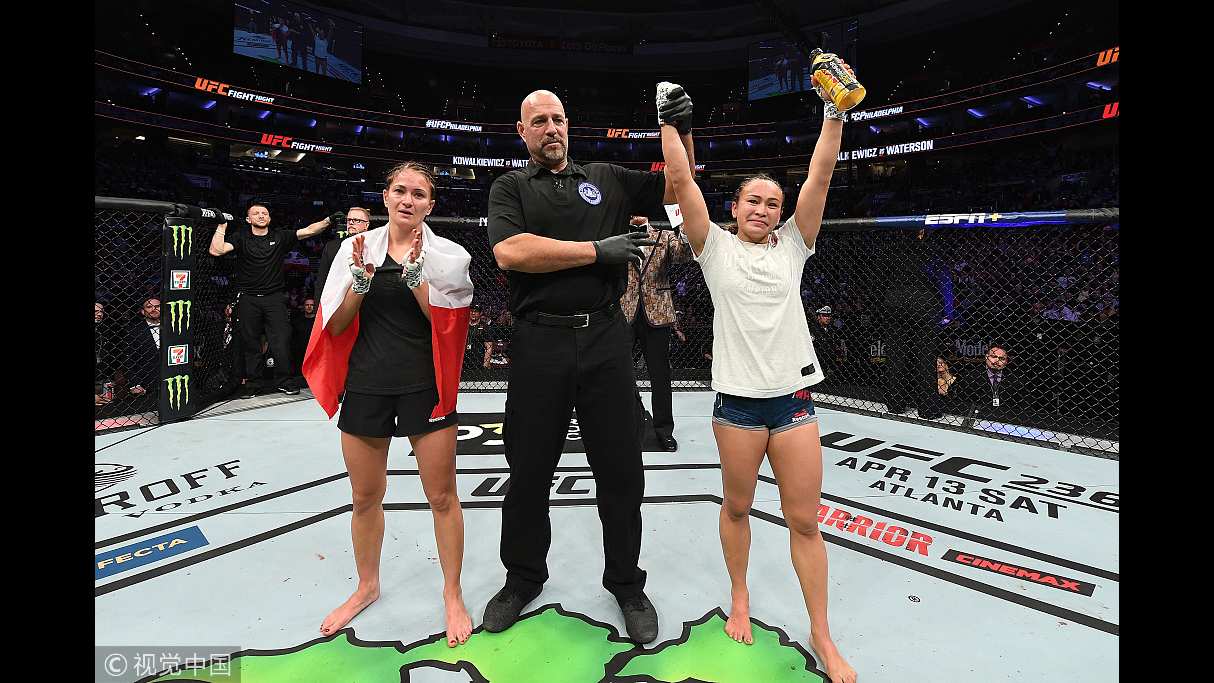 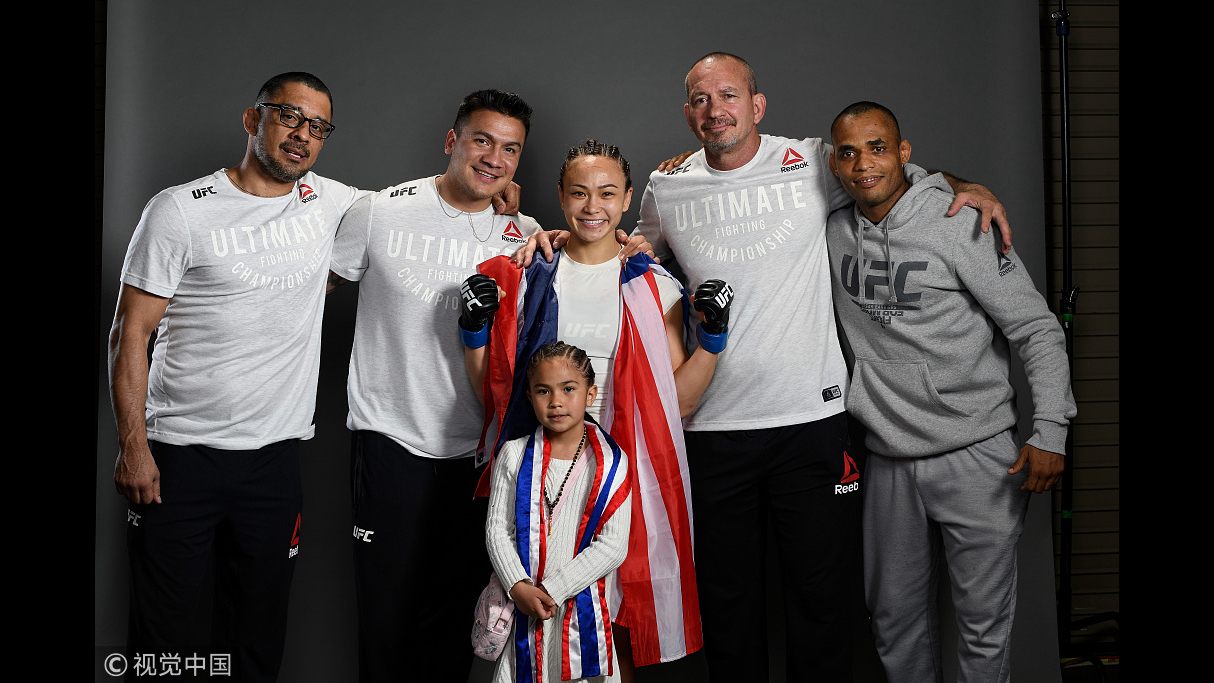 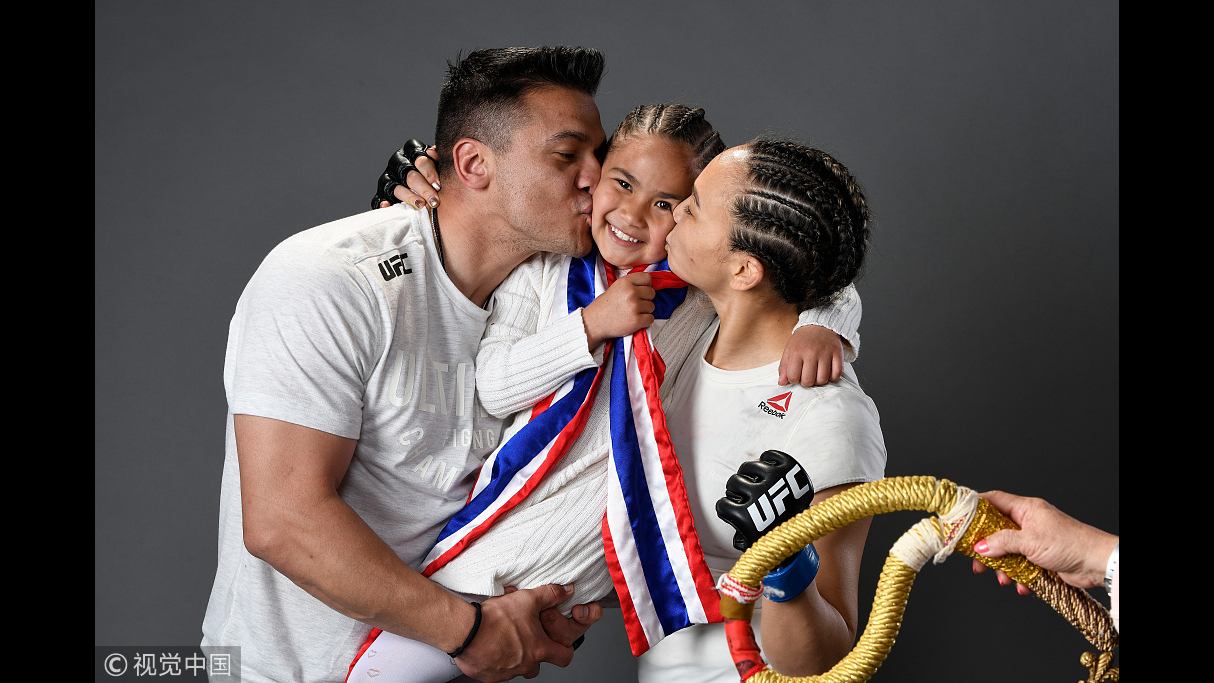 Michelle Waterson and her husband kiss their daughter. /VCG Photo

Michelle Waterson and her husband kiss their daughter. /VCG Photo

CGTN: What is your ethnic background? Was your family influential in your decision to become a fighter?
My Mother is half Thai and half Chinese. She grew up in Thailand. My father is an American, and I grew up in Colorado. My mom has a competitive spirit, and my father wrestled as a child.
My brother was the biggest influencer. I wanted to be just like him. He loved watching action movies, and we always dreamed that one day we could be action stars. 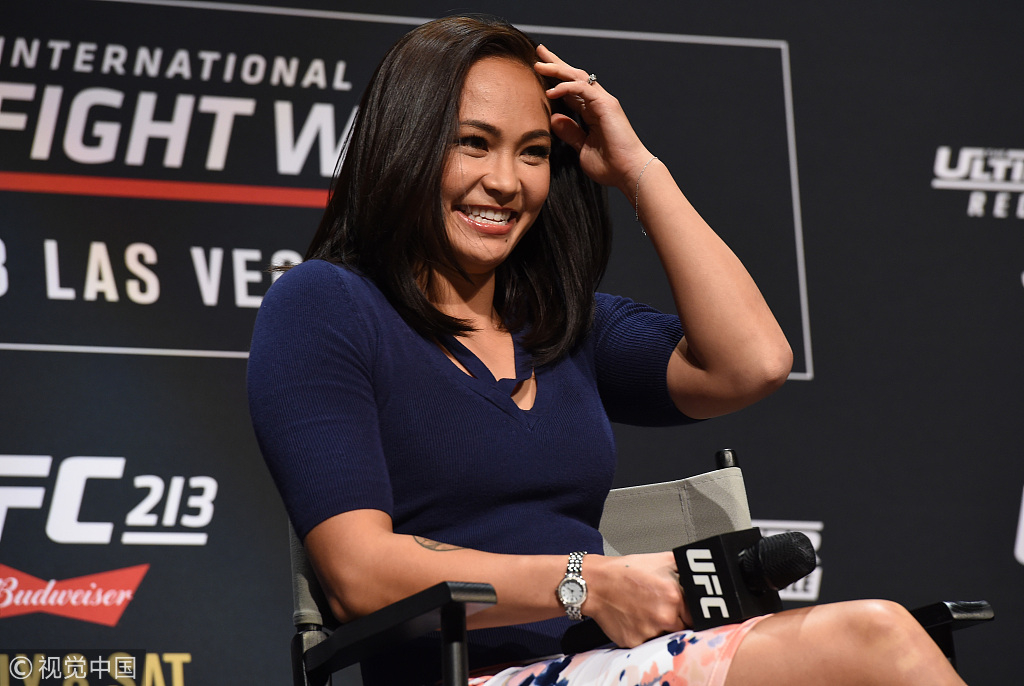 CGTN: You enter the octagon wearing a Muay Thai headband, there are videos of you practicing traditional Kung Fu, and your nickname is "Karate Hottie." How are Asian martial arts incorporated into your fighting style and where did you first learn about them?
I have always been fascinated by all martial arts and want to soak up all the knowledge I can. I began my training with American freestyle Karate; then I learned a Wushu.
When I took an interest in fighting, I began to learn Muay Thai, Boxing, Wrestling, Judo, and Juijitsu. I think MMA is the perfect platform for me to explore all the different martial arts that I have learned.
It's amazing to me how many different possibilities there are with all the different arts and learning when the best time to use each art is. Martial arts is about the process of learning, just as life is! 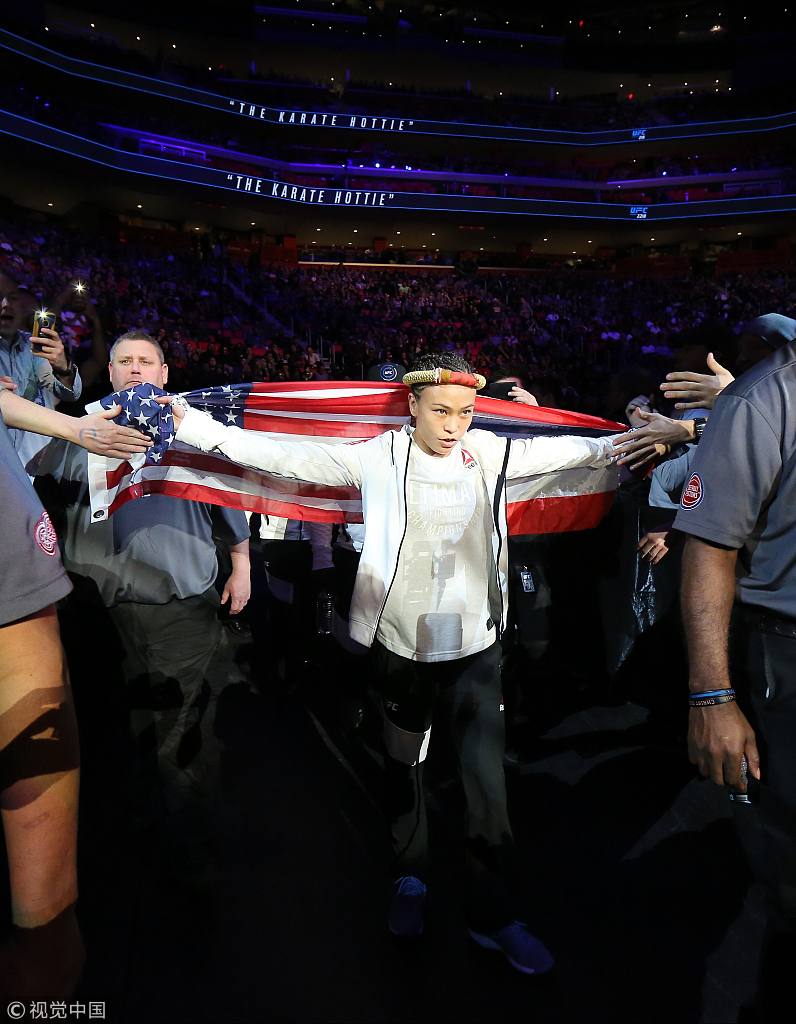 I first understood this when I took an interest in the more combative side of martial arts. At this time I had been doing Karate for eight years, and Wushu for three years. I thought I knew it all because I was a black belt and had been doing martial arts for over ten years.
I went into an MMA gym and decided to jump in and spar. After trying to catch my sparring partner with an ax kick and put on my butt with a leg kick, I quickly realized that I was out of my element and had much to learn.
I felt like my martial arts level was elementary. Since then my mentality about martial arts has been to always understand that there is still more to learn. 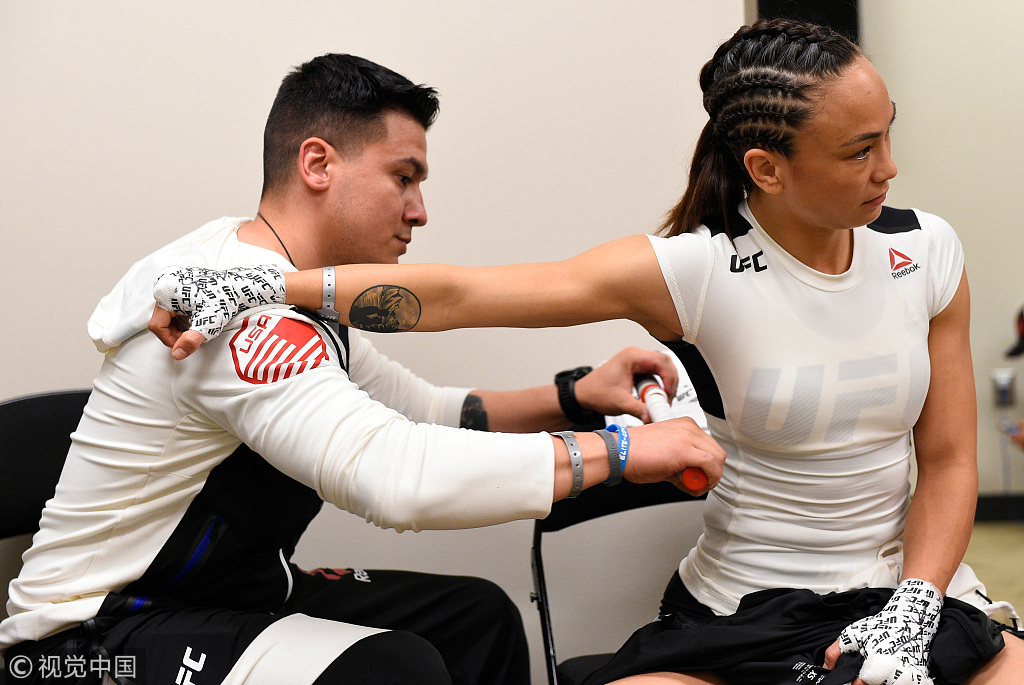 CGTN: You visited China earlier this year and spent time at the Shaolin Temple. What inspired this trip and how did this experience affect you?
The Shaolin Temple was a dream come true. I could feel the energy of peace and focus!
My favorite part of visiting the Shaolin Temple was meeting the head monk and getting a tour of his living space. It was so simple, and he was so clear-minded, down to earth, and humble. It was refreshing to see how little he needed to live a fulfilled life.
He showed us the meditation room and his calligraphy scrolls and told us stories of different meditation journeys about himself and his students. It was so mind-opening and allowed me to look into myself and inspired me to do some self-reflecting of my own.
I was so honored to receive a gift from him of a handwritten scroll! It means a lot to me, and I am having it framed and put up in my gym. 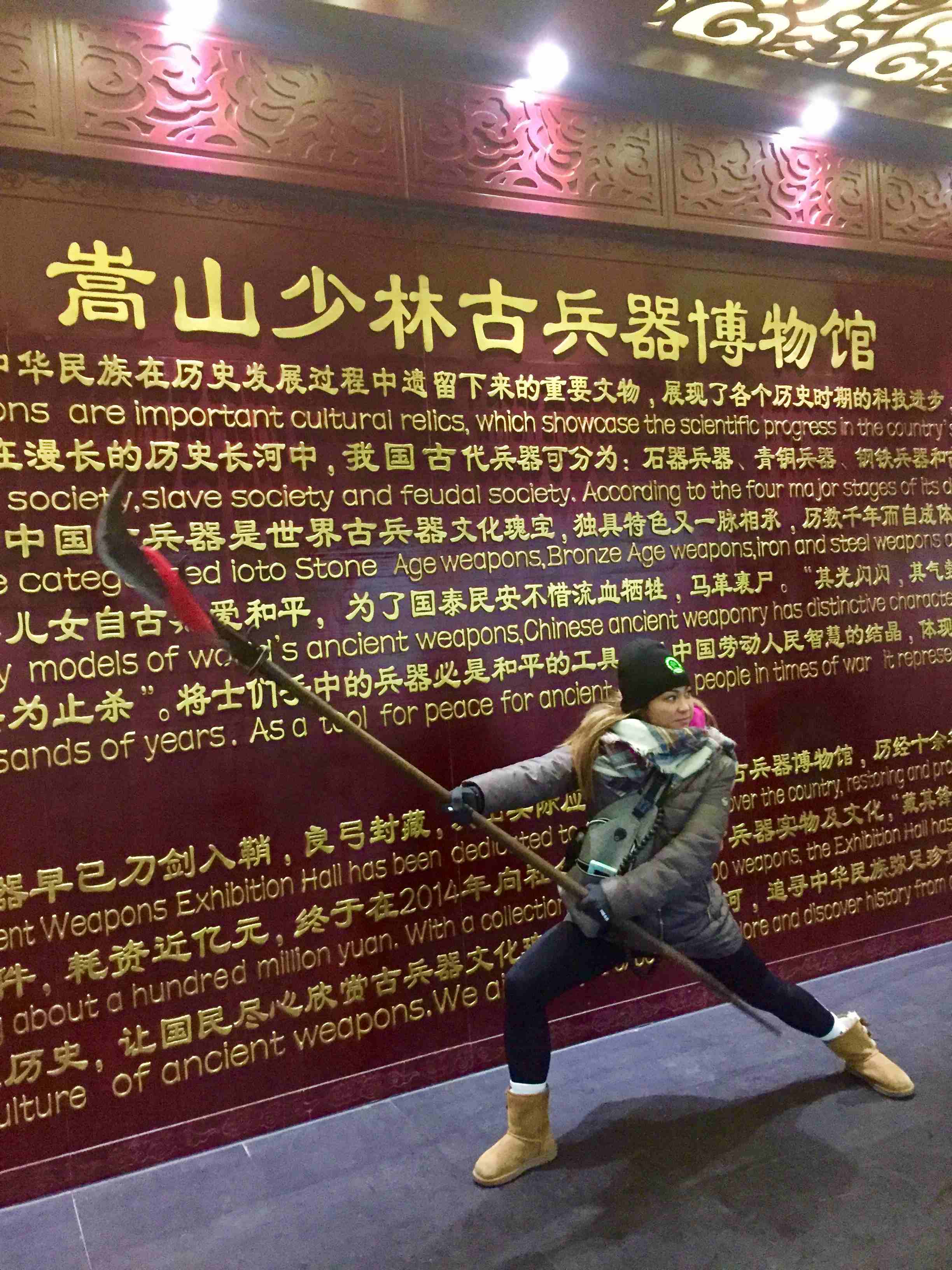 CGTN: Have you visited Asia for any other martial arts experiences? If so, what did you learn on these trips?
I had the chance to visit Thailand where I began my fighting career learning Muay Thai at Sityodthong.
Going to Thailand ignited my flame and allowed me to realize my true calling as a martial artist. I have also visited Singapore and Malaysia to do MMA seminars which were an amazing experience.
I love doing seminars because I feel like teaching others forces me to break down techniques and learn them at a deeper level which then adds depth to my understanding of martial arts. CGTN: Is there anything you want to say to amateur fighters and your Chinese fans?
Your martial arts journey will be a long one. It is like a labyrinth; sometimes you can feel lost but you just have to continue on your path, and it will lead you to where you belong.
Even your downfalls will take you closer to your goal. You need to continue to challenge yourself and continue to learn with enjoyment.
Never lose sight of why you choose this path. It is easy to test yourself for one day; but is it something you can do over a lifetime?