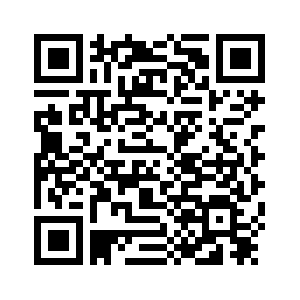 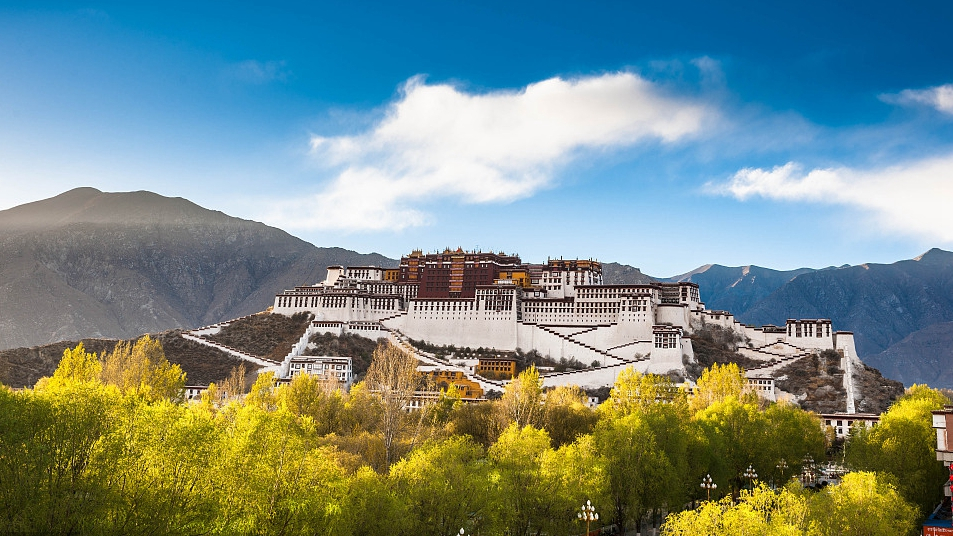 The central government of China has always prioritized the improvement of the economy and people's livelihood in the Tibet Autonomous Region when it comes to the area's development.
This has been particularly reflected from the six Tibet work forums that have been held by the Central Committee of the Communist Party of China (CPC) since the 1980s.

Economy as the centerpiece

Throughout these forums, economic advancement has remained the central task for boosting the autonomous region's development.
Thanks to the preferential policies implemented in Tibet in fields such as tax, investment and employment, the economy in the autonomous region remains upbeat, with its GDP growth has been in the double-digits for 26 consecutive years. 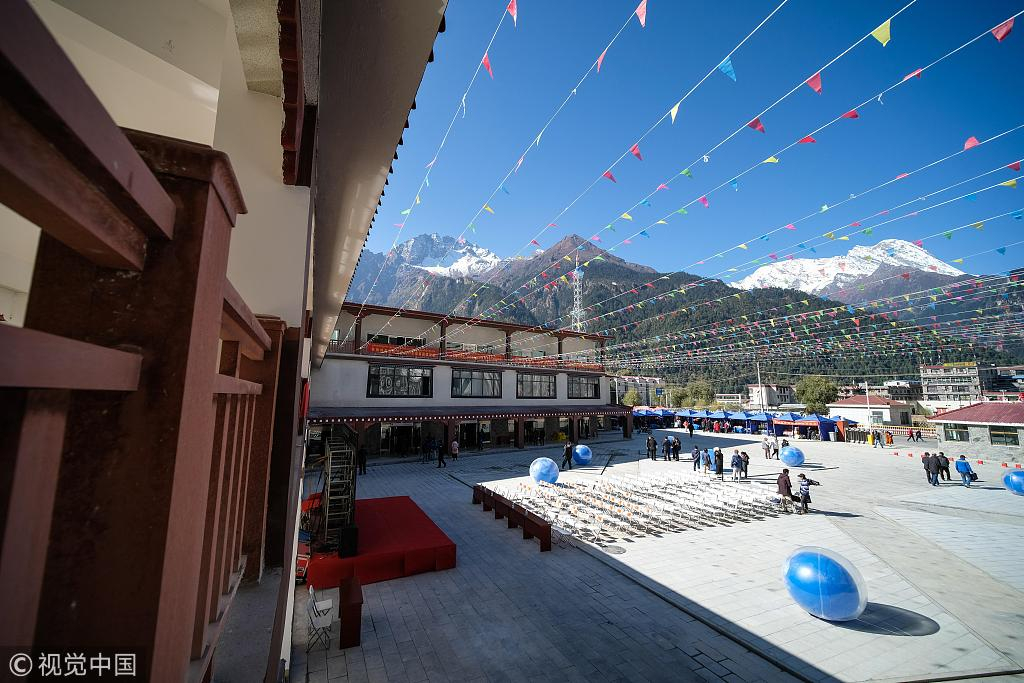 A commercial complex opens in Gyirong County in the Tibet Autonomous Region near the border with Nepal, October 31, 2018. /VCG Photo

A commercial complex opens in Gyirong County in the Tibet Autonomous Region near the border with Nepal, October 31, 2018. /VCG Photo

According to official statistics, Tibet's GDP in 2018 exceeded 140 billion yuan (20.85 billion U.S. dollars) – on comparable prices, it is 191 times that of the year 1959, when the democratic reforms began in Tibet.
The tech and digital industries, together with agriculture, tourism, culture, green industries and modern services, have become major industries in the region, contributing to high-quality growth.
Read more:
How can Tibet ensure sustainable development?

The forums have also initiated plenty of aid projects in Tibet, covering fields such as agriculture, infrastructure facilities, culture, power generation and mining, among others.
The decision to solicit aid to Tibet from all over the country was made at the Third Forum on the Work of Tibet in 1994.
Until 2014, 20 years since the "partner assistance" policy toward Tibet was adopted, about 26 billion yuan (around 3.87 billion U.S. dollars) of financial aid had been invested in Tibet, with almost 6,000 officials and technicians sent to work there, and 18 provinces and cities being its assisting partners.
A white paper released on Wednesday on the achievements of Tibet's democratic reforms over the past six decades pointed out that, since 2015, over 10,000 aid projects have been carried out in the autonomous region, along with a financial aid of over 40 billion yuan (5.96 billion U.S. dollars). 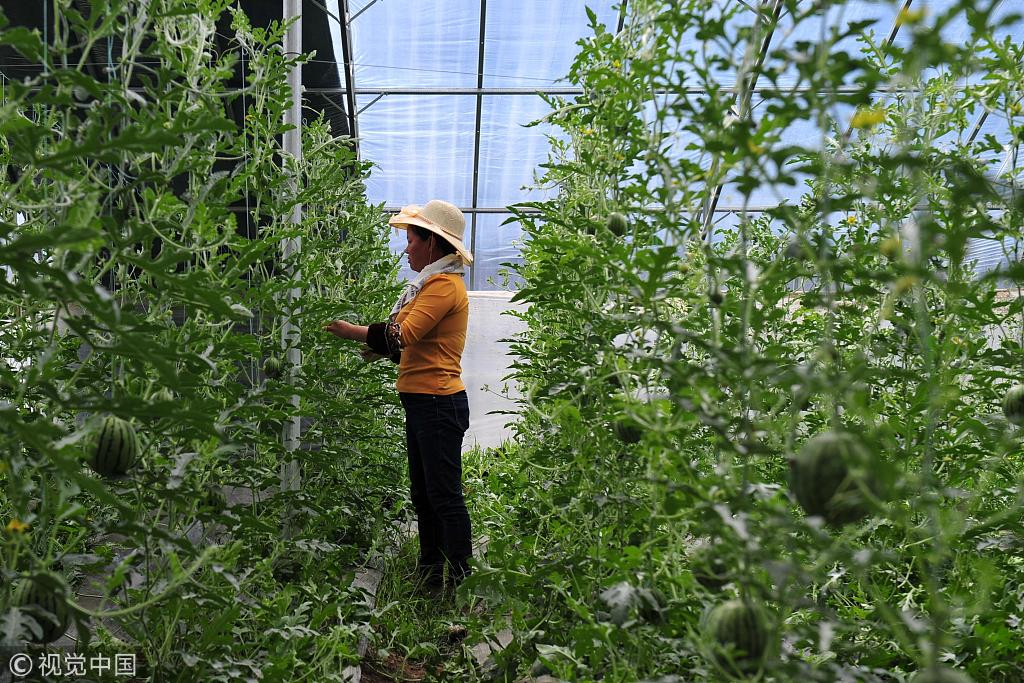 Read more:
Medical support program making a difference in Tibet
Zhaluo, a consultant with the China Society for Human Rights Studies and also a research fellow with the China Tibetology Research Center, said the rapid social and economic development of Tibet and the tremendous changes in the lives of residents there can be attributed to the all-time supportive government policies, strong fiscal aid from the central government and assistance from other provinces and enterprises.

Since the fifth forum in 2010, it has been required that other than Tibet, the provinces of Sichuan, Yunnan, Gansu and Qinghai, should prioritize work concerning areas with high Tibetan populations within their provinces.
These areas include expansive and vast lands in China's deep southwest that suffer from serious poverty.
According to a report by Farmers' Daily in August 2018, apart from traditional methods like offering subsidies, building infrastructure facilities and relocating people, local governments have worked relentlessly on exploring innovative ways to lift people out of poverty, such as creating jobs for residents who volunteer to maintain local environment and ecology and making value-added products out of common raw materials like yak meat. 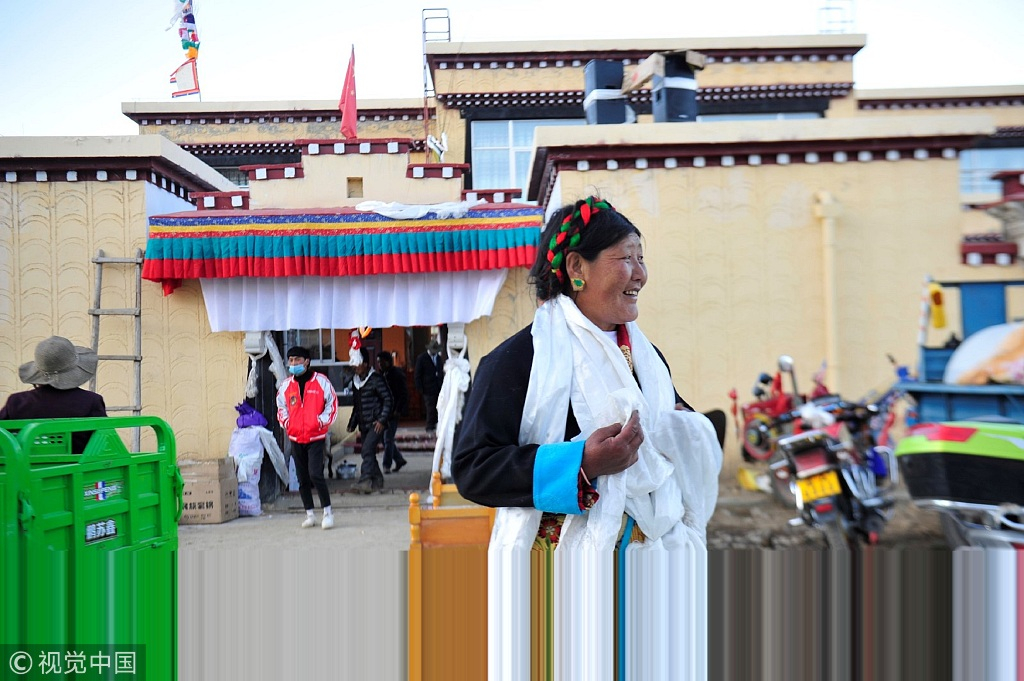 According to Wednesday's white paper, about 710,000 people in Tibet have been lifted above the poverty line since 2013.
With only one year until the realization of the goal of building China into a moderately prosperous society, the central government is set to further carry forward its targeted measures to help Tibet and areas with high Tibetan populations in the four provinces to win the tough anti-poverty battle.

Through the peaceful liberation in 1951 and the democratic reform in 1959, the Tibet Autonomous Region was founded in 1965, officially establishing the system of regional ethnic autonomy in the area.
As pointed out in a 2015 white paper on the successful practice of the regional ethnic autonomy in Tibet, this system inherits the historical traditions of the region and is a socialist democracy; it conforms to the historical traditions of Tibet and the whole country, as well as to the common will and fundamental interests of the people of all ethnic groups.
As to the religious policy toward Tibet, the central government has always upheld freedom of religious belief under the socialist legal system.
Read more:
How to understand religious policy in Tibet
In a 2018 white paper titled "China's Policies and Practices on Protecting Freedom of Religious Belief," it is reiterated that respecting and protecting freedom of religious belief is a basic policy of the CPC and the Chinese government. 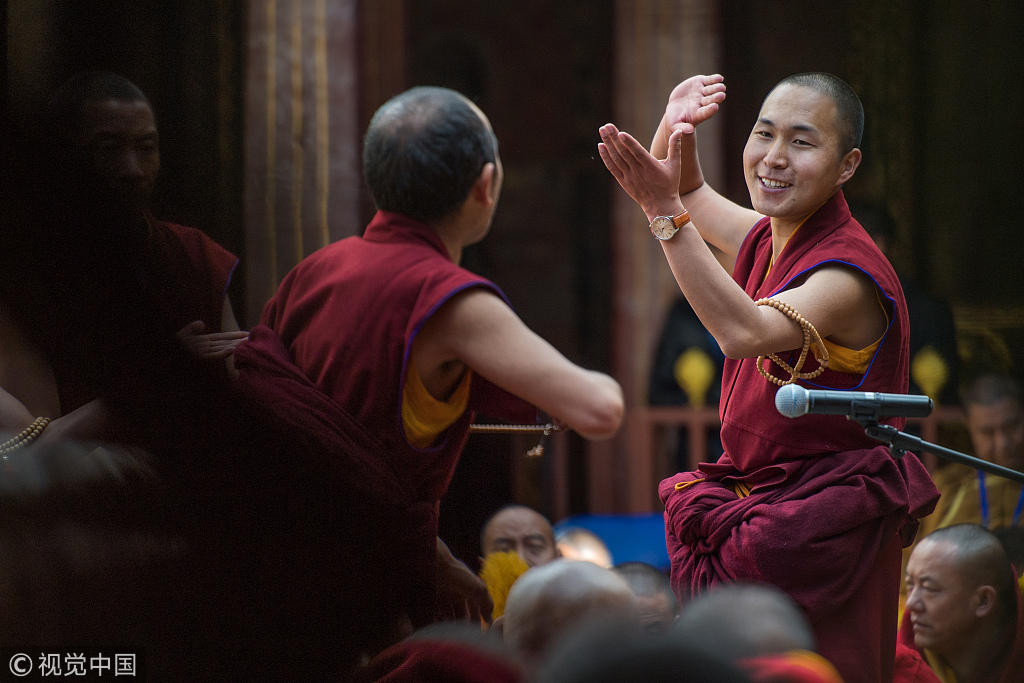 "Believers and non-believers enjoy the same political, economic, social and cultural rights, and must not be treated differently because of a difference in belief," the white paper said.
Dawa Cairen, a researcher with the China Tibetology Research Center, also said that religious activities and beliefs are well protected by law, during a meeting held in Geneva in October last year about the human rights practice in China.
With a total of 1,787 religious places and more than 46,000 monks and nuns, Tibetan religious believers enjoy full freedom to carry out normal religious activities, he noted.

The Sixth Forum on the Work of Tibet in 2015, which was held after President Xi Jinping took office, summed up the experience of the previous five while President Xi raised a set of strategies and principles on Tibet.
The principles include promoting the rule of law and creating prosperity in Tibet, dedicating long-term efforts to its development, uniting people's hearts and solidifying the foundation of the work.
President Xi also pointed out that the focus of the work in Tibet should always be placed on national and ethnic unity. 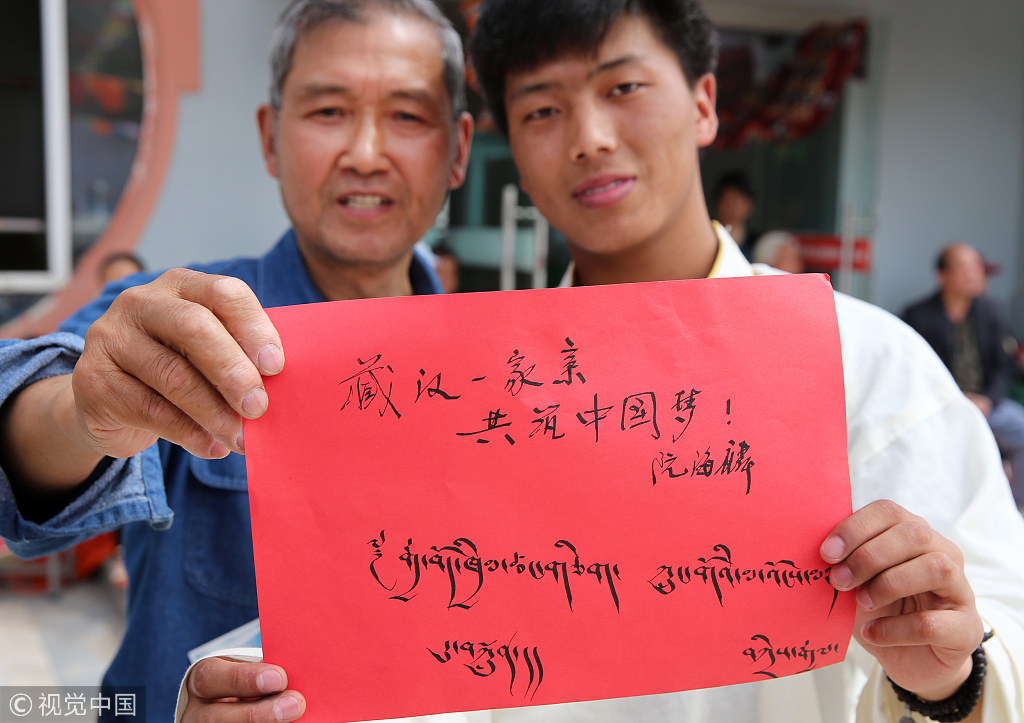 A painter and a Tibetan student hold a piece of paper on which the two wrote "Tibetan and Han people are of the same family. We are pursuing the Chinese Dream together!" in Mandarin and Tibetan in east China's Jiangsu Province, May 13, 2018. /VCG Photo

A painter and a Tibetan student hold a piece of paper on which the two wrote "Tibetan and Han people are of the same family. We are pursuing the Chinese Dream together!" in Mandarin and Tibetan in east China's Jiangsu Province, May 13, 2018. /VCG Photo

Maintaining the steady, long-term and overall stability in Tibet is an important task, the Chinese president stressed.
Great significance was also attached to fighting poverty and improving people's livelihood in Tibet and areas with a high Tibetan population.
The sixth forum worked out an overarching guidance on the work of Tibet and made a comprehensive plan for the prospective development of the autonomous region.
The idea of putting stability in Tibet at the core of China's border region governance was also recognized at the forum, setting up a clear principle for future work.
Sixty years have passed since the democratic reform in Tibet Autonomous Region took place, yet the major tasks of the central and local governments - which are to seek development for local residents and maintain the stability and security of the region – have never wavered.
(With inputs from Xinhua)