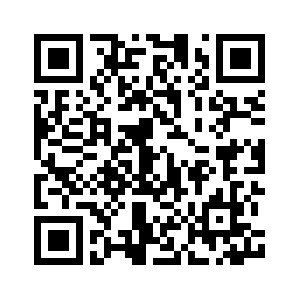 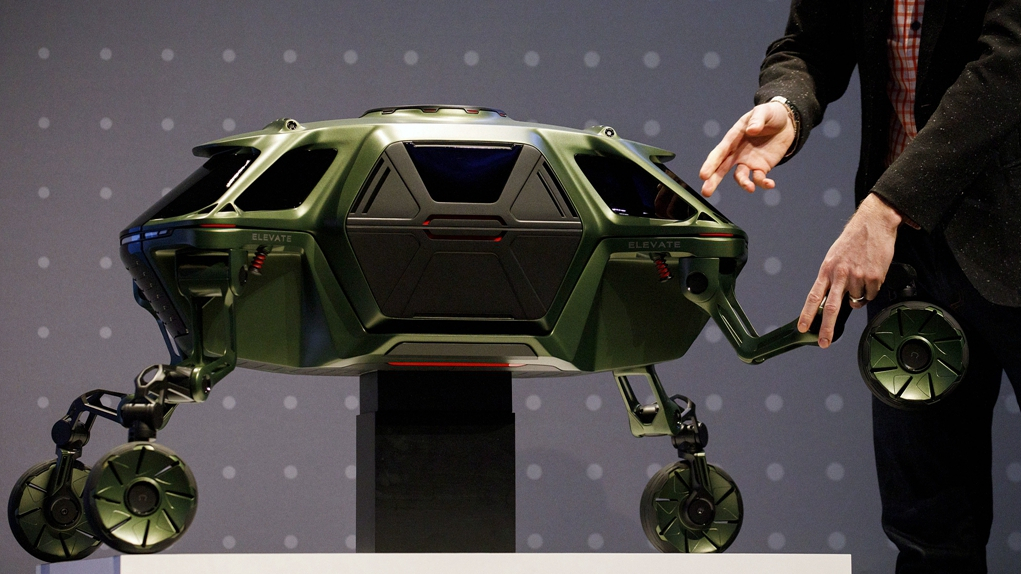 Technology firms tackling the challenge of autonomous driving are focusing on the "user experience" of vehicles that are increasingly becoming an extension of people's digital life.
Carmakers and tech firms are refining the systems for self-driving navigation and safety. But with full autonomy still likely years away, there is a growing interest in making cars a place to live, work, communicate and enjoy the ride.
At the Consumer Electronics Show (CES) this week, exhibitors were showcasing technology for comfort, safety, entertainment and personalization.
Byton, the China-based electric carmaker expected to launch its first vehicles late this year, showed its sedan with a 48-inch display panel, covering the width of the dash, where riders can watch movies, check messages and get other information - although the full array of services won't be offered while someone is driving.
The Byton car will use facial recognition to customize the experience for drivers and passengers, with personalized music and recommendations. 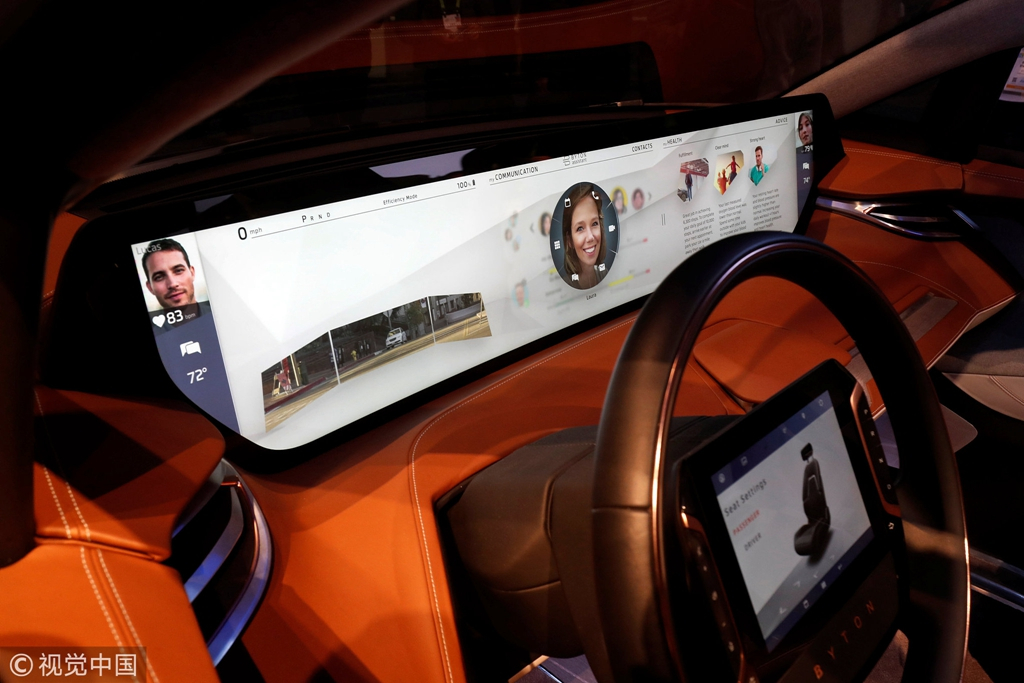 A dashboard video screen is displayed in a Byton M-Byte electric vehicle during the 2019 CES in Las Vegas, on January 8, 2019. /VCG Photo

A dashboard video screen is displayed in a Byton M-Byte electric vehicle during the 2019 CES in Las Vegas, on January 8, 2019. /VCG Photo

The car would know who is inside and how long they have been traveling, and in one example cited by the company, make recommendations for restaurants along a particular route.
"The car could become the most important device in your digital life," said Carsten Breitfeld, co-founder and chief executive of Byton.
Byton will offer the potential for partial autonomy, allowing riders to focus on other things such as watching movies, shopping with a voice assistant or browsing the Internet.
The vehicle will work through voice, touch, gestures or facial recognition.
"It's all about the customer experience," Carsten told a media event at the Las Vegas show, while noting that more of the enhanced features will be used when the car is in autonomous mode or stationary. 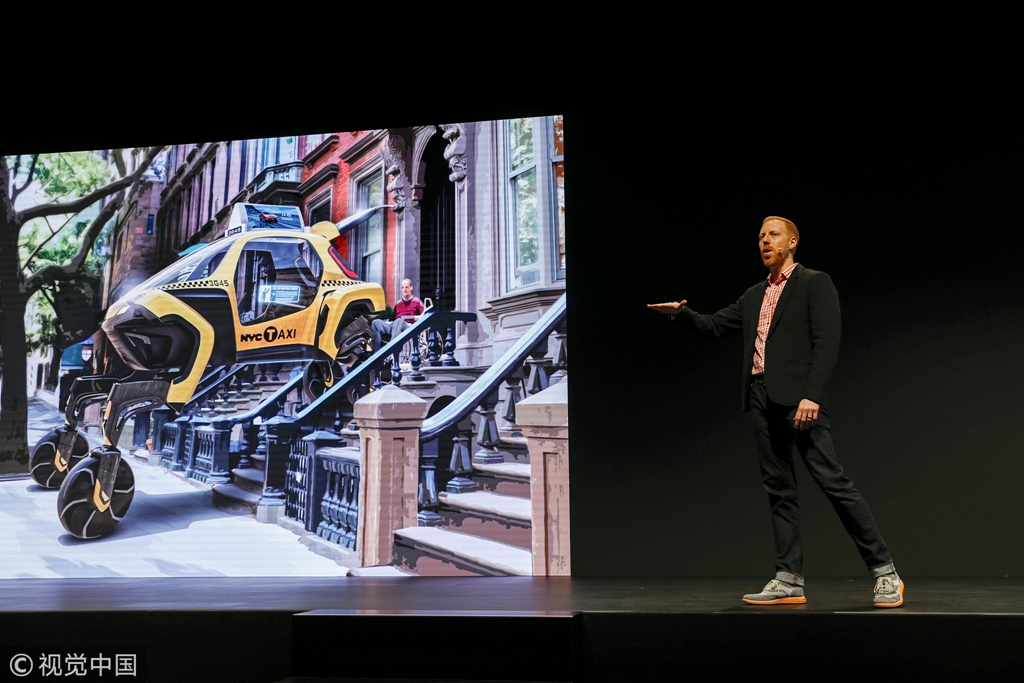 Gawain Morrison, co-founder of the British-based artificial intelligence startup Sensum, said the human factor is becoming more important in the automobile sector.
"A lot of the technology up to now has been about moving from point A to point B," he said.
"The next generation is about how to interact with the humans. They need an understanding about the human state at any point in the journey."
Sensum and its auto-supplier partner Valeo showed what it called "empathic mobility tech" which can measure occupants' emotional state and physiological comfort, and adjust its environmental settings accordingly.
The South Korean automaker Kia dubbed its system "'Real-time Emotion Adaptive Driving," or READ with an emotional AI-based cabin which analyzes a driver's emotional state by monitoring facial expressions, heart rate and electrodermal activity.
"The system enables continuous communication between driver and vehicle through the unspoken language of 'feeling', thereby providing an optimal, human-sense oriented space for the driver in real-time," said Albert Biermann, president and head of research for Kia parent Hyundai.

German auto equipment maker Continental was showing its monitoring system which can detect if a driver is distracted or drowsy, in line with recommendations from the European Union.
"You may get a visual warning, or the seat will vibrate, or the steering wheel will vibrate," said Continental executive Heinz Abel. "This is part of an effort to guide your attention back to the road." 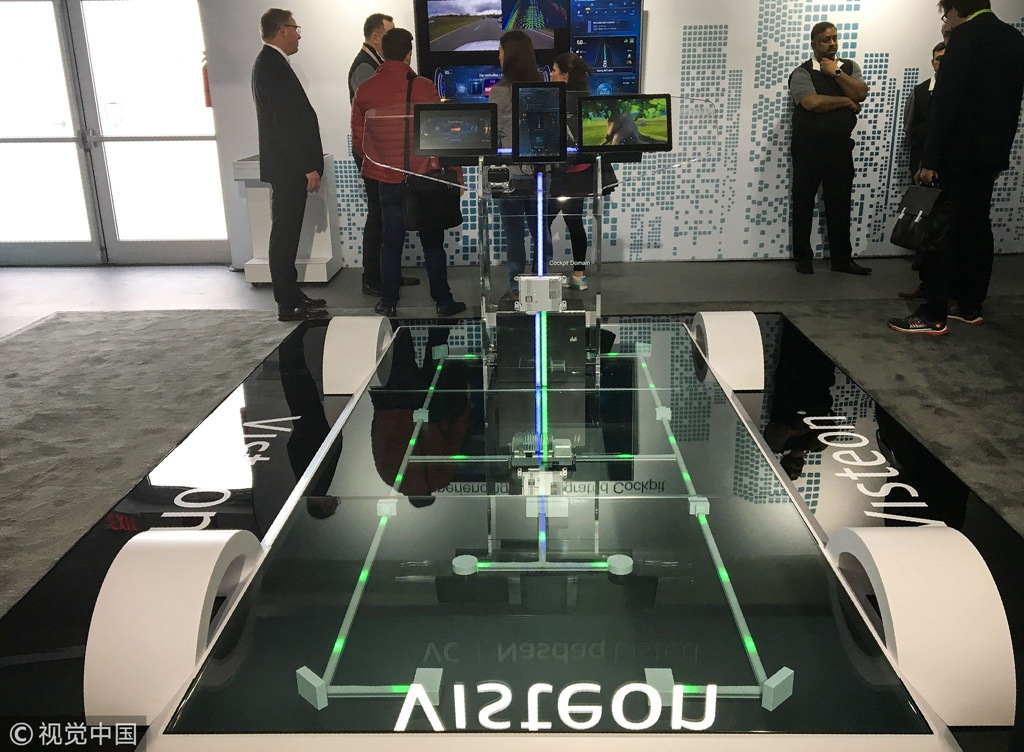 Visteon's exhibit at the 2019 Consumer Electronics Show included a prototype cockpit for cars which can be adapted for autonomous driving on January 8, 2019 in Las Vegas. /VCG Photo

Visteon's exhibit at the 2019 Consumer Electronics Show included a prototype cockpit for cars which can be adapted for autonomous driving on January 8, 2019 in Las Vegas. /VCG Photo

Several equipment makers were showcasing what they called the "cockpit of the future" which could be available for conventional vehicles and adapted for autonomous mode.
Visteon, a former Ford unit which makes automotive equipment, displayed its electronic control unit which integrates the driving and manages other system such as information and entertainment.
Upton Bowden, the head of new technology for Visteon, said equipment makers will be offering a "transitional cockpit" which helps people understand what is happening in autonomous mode.
"You want the occupants to trust the system," Bowden told AFP.
"When you get into an automated vehicle you have no knowledge of that system, so you have some level of discomfort."
The key to overcoming mistrust, he said, is to offer more transparency: "We can give you a real-time digital picture of what's going on by taking the data and transforming it into a graphical user experience."
Bowden said these systems can be especially useful for autonomous rideshare vehicles, allowing personalization of the experience through cloud-based technology.
"It would recognize who you were and handle payment through facial recognition," he said.
"It can instantly pair to your cloud account and bring in your favorite radio stations and other information."
(Top image: A Hyundai Motor Co. Elevate walking car concept sits on display during the Hyundai Motor Co. event at the 2019 Consumer Electronics Show in Las Vegas, on January 7, 2019. /VCG Photo)
Source(s): AFP