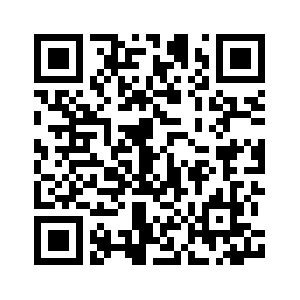 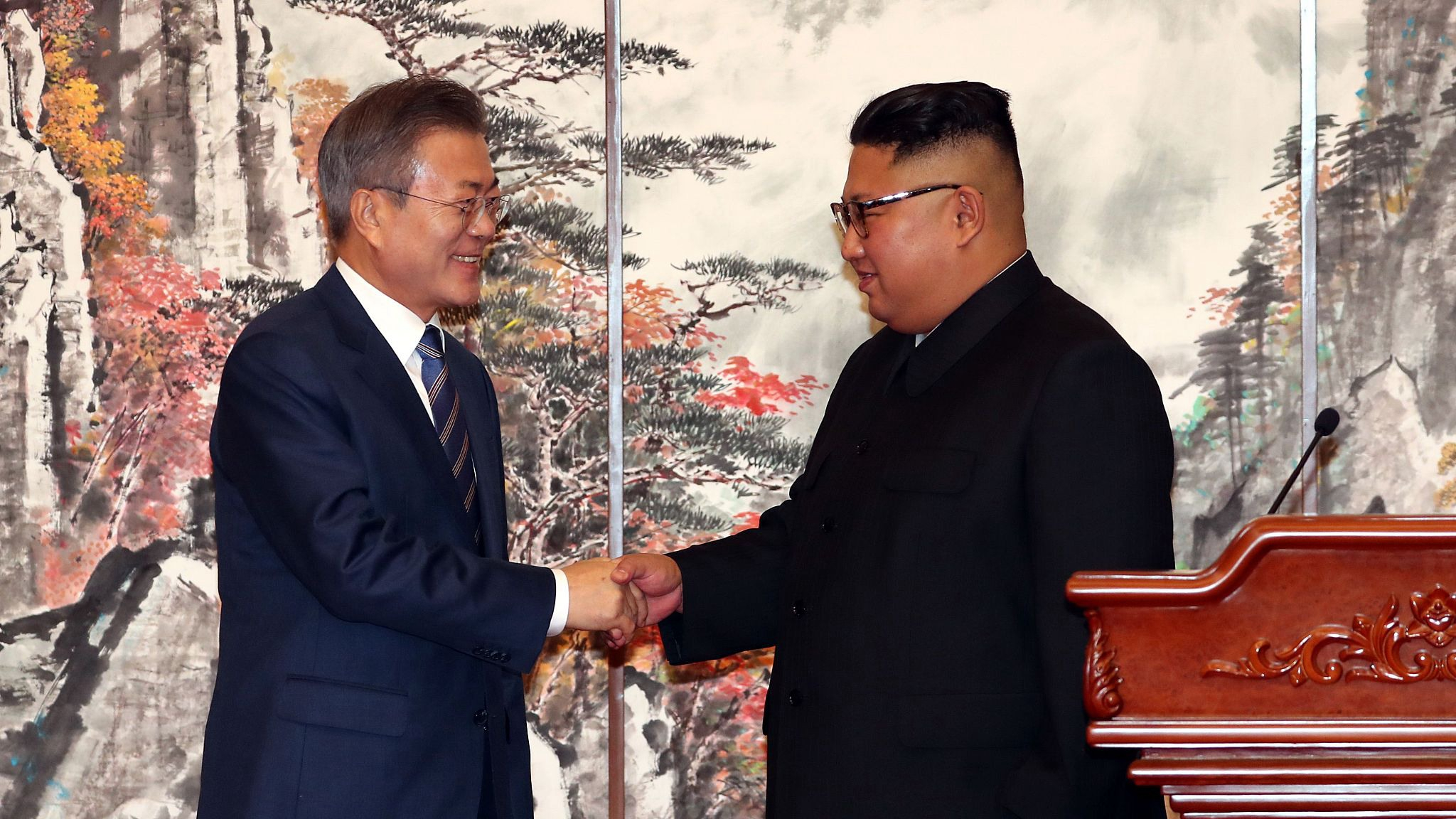 Editor's note: Wang Fudong is an assistant research professor at the division of Korean Peninsula Studies,  the China Institute of Contemporary International Relations. The article reflects the expert's opinion and not necessarily the views of CGTN.
On September 18, Republic of Korea (ROK) President Moon Jae-in visited the Democratic People's Republic of Korea (DPRK) and held the third summit within five months. The two sides reached a series of achievements such as the Pyongyang Declaration and the agreement on Implementing the Consensus of the Military Sector in the Panmunjom Declaration. This will have a substantial impact on the once stagnant denuclearization process.
There are three main achievements in this summit. First, new progress has been made on the issue of denuclearization. The DPRK promised to permanently destroy both the Tongchang-ri missile engine test site under the witness of relevant state experts and intends to abandon the Yongbyon nuclear facility under certain conditions.
This shows that DPRK has partially accepted the principle of "verifiable" as required by the US. Moreover, Kim Jong Un publicly mentioned the denuclearization of the Korean Peninsula for the first time in the case of live media broadcasts, which expressed his determination to denuclearize. 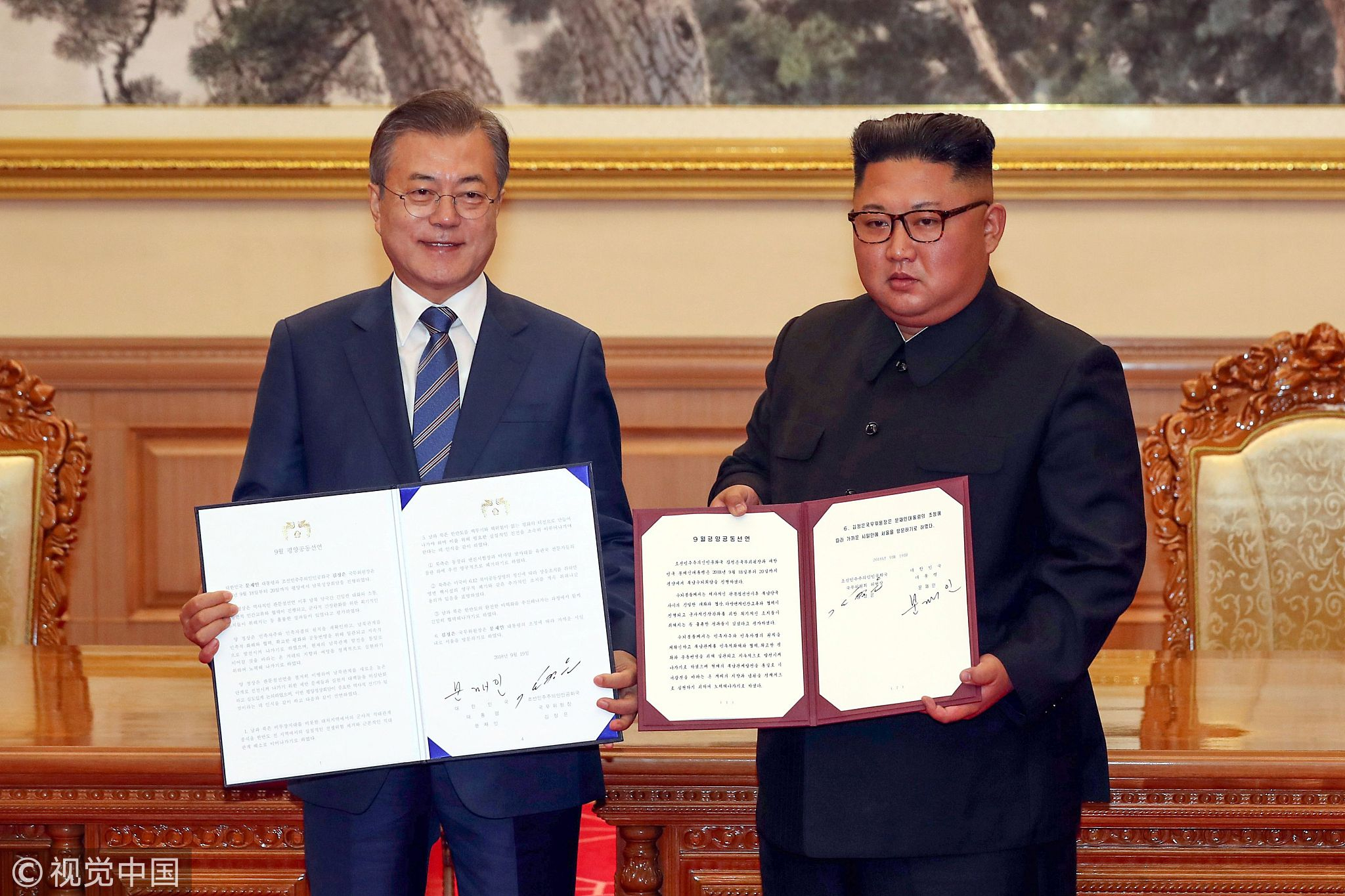 Second, prevent military conflicts on the Korean Peninsula. The DPRK-ROK military field agreement emphasizes the alleviation of military tension on the peninsula, the cessation of hostilities in the border areas, and the establishment of a crisis control mechanism to prevent emergencies.
Third, strengthen cooperation between the North (DPRK) and the South (ROK) in the fields of economy, humanitarianism, transportation, environment, sports and health. Kim Jong Un will also strive to visit ROK during the year.
Although the summit reached many results, the core is whether the nuclear issue can make a substantial breakthrough. If the nuclear issue cannot progress, other agreements will be difficult to maintain.
In August, US Secretary of State Pompeo's visit to the DPRK was stranded, marking the obstruction of the denuclearization negotiation process between US and DPRK. Under this circumstance, the DPRK has taken new steps in denuclearization, which is beneficial to the progress of the US-DPRK negotiation process. 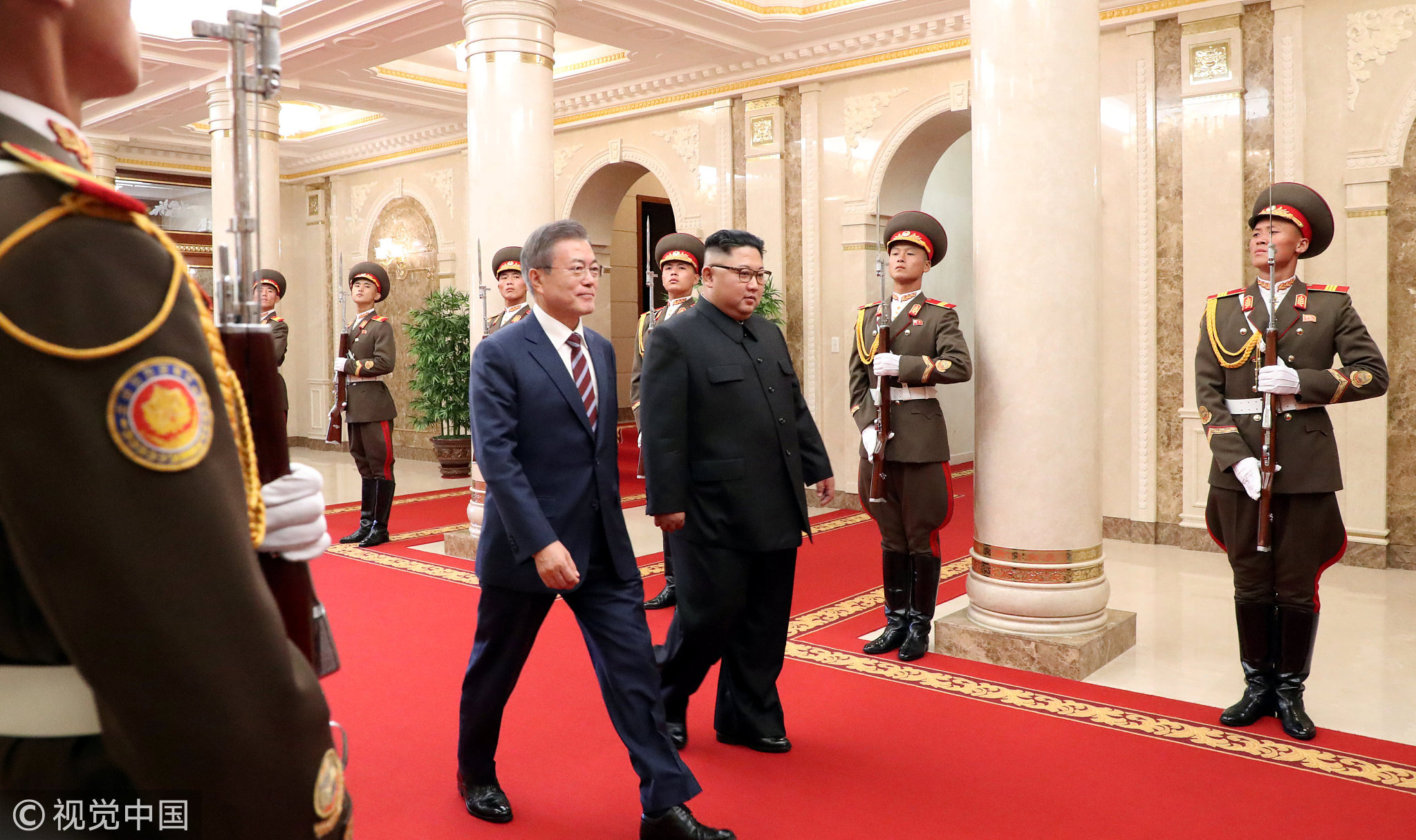 Moon Jae-in and Kim Jong Un arrive for their meeting at the headquarters of the Central Committee of the Workers' Party of Korea in Pyongyang, DPRK, September 18, 2018. /VCG Photo.

Moon Jae-in and Kim Jong Un arrive for their meeting at the headquarters of the Central Committee of the Workers' Party of Korea in Pyongyang, DPRK, September 18, 2018. /VCG Photo.

However, many people still question the lack of sincerity of DPRK's nuclear disarmament, especially since the DPRK has not stated its position on the nuclear declaration that the US requires.
In the case that the Korean nuclear issue has continued for many years and the mutual trust between all parties is seriously inadequate, it is unrealistic to imagine the denuclearization can be done in one night. Even a little step of denuclearization is helpful for building trust, so the DPRK should be encouraged to keep on.
Moreover, the agreement seen by the outside world is only part of the inter-Korea summit. The leaders of the DPRK and the ROK are likely to reach a certain tacit agreement on the nuclear declaration and the nuclear roadmap.
Chung Eui-yong, Seoul's NSC chief told reporters in Pyongyang that both leaders also discussed a lot of content outside the agreement, suggesting that the DPRK and the ROK have another consensus on the nuclear issue.
Next week, President Moon will meet with Trump to convey Kim Jong Un's attitude on the issue of denuclearization. It can be expected that the DPRK-US negotiations will likely make certain progress. 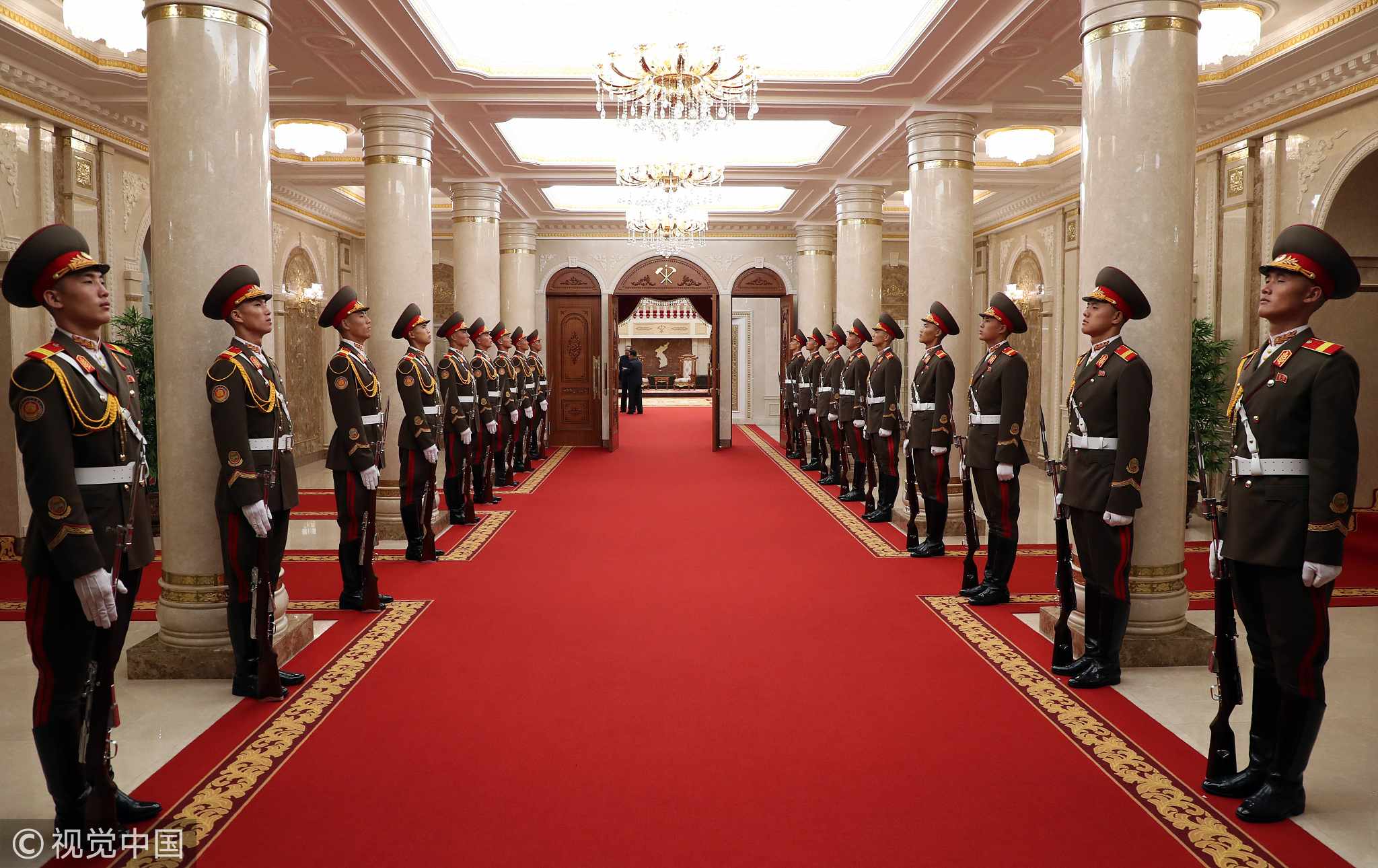 This pool photo taken on September 18, 2018, shows a hall inside the headquarters of the Central Committee of the Workers' Party of Korea in Pyongyang. /VCG Photo.

This pool photo taken on September 18, 2018, shows a hall inside the headquarters of the Central Committee of the Workers' Party of Korea in Pyongyang. /VCG Photo.

At present, despite the twists and turns in the situation of denuclearization negotiation talks, all parties do not want to break. Especially for the DPRK, the protagonist, the successful development of nuclear weapons only proves its ability on security, but its ability to develop has not been determined yet.
If the DPRK is isolated from the world too long, the economic gap with neighboring countries will grow bigger and bigger, and ultimately it will not be able to support the long-term stability of its political power.
The DPRK leader is very clear about this. We can see that Kim Jong Un frankly told Moon that the DPRK infrastructure and economic conditions are lagging behind developed countries. He also openly told the public many times that he was very self-blaming for failing to let the DPRK people live a good life.
Therefore, the next strategic goal of the DPRK government must be integrated into the international community and take economic development as the center to achieve economic growth as soon as possible. 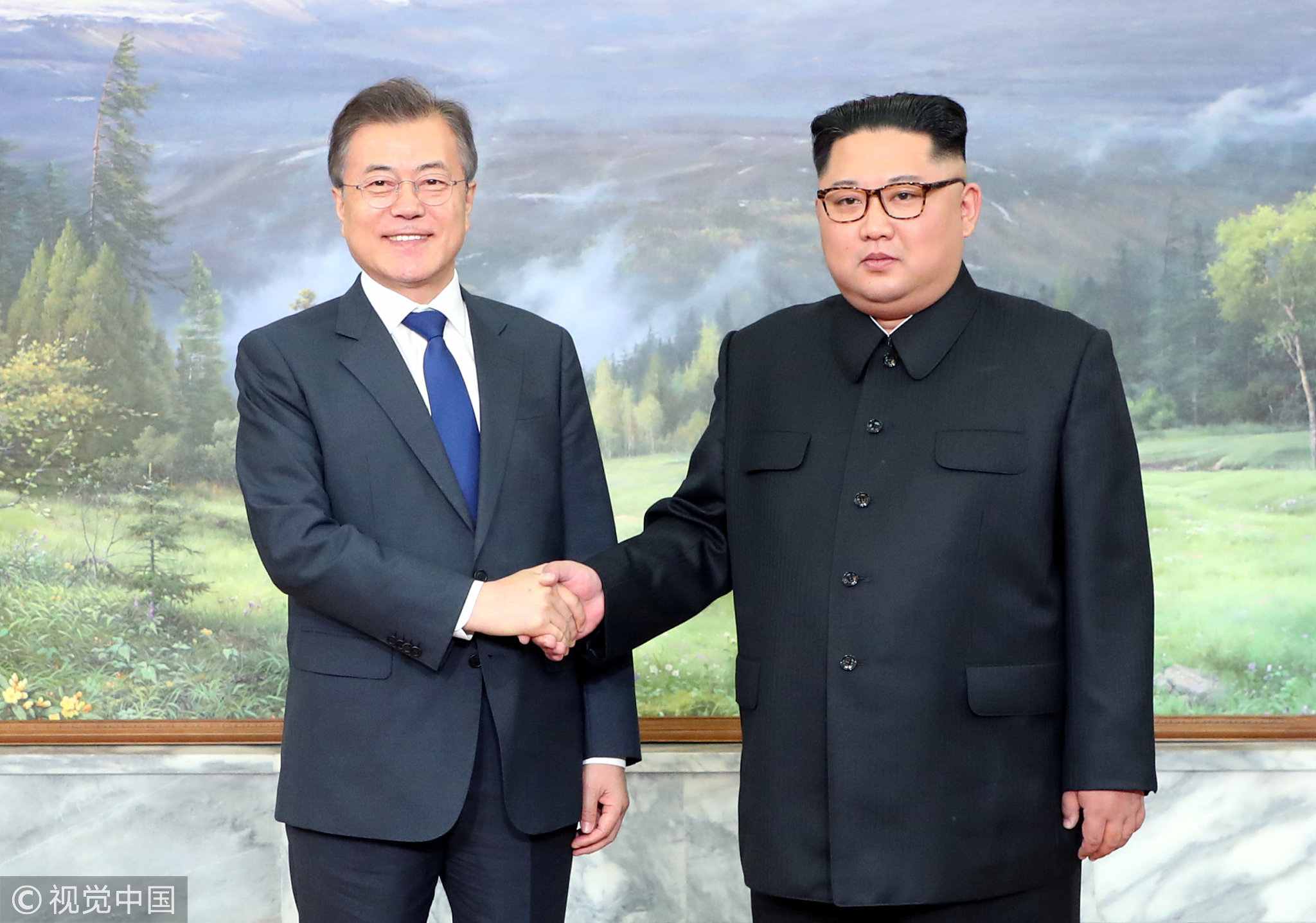 President of the ROK Moon Jae-in shakes hands with DPRK leader Kim Jong Un during their summit at the truce village of Panmunjom, DPRK, May 26, 2018. /VCG Photo.

President of the ROK Moon Jae-in shakes hands with DPRK leader Kim Jong Un during their summit at the truce village of Panmunjom, DPRK, May 26, 2018. /VCG Photo.

To achieve economic growth, it is inseparable from the recognition of the DPRK by the United States, the ROK and the entire international community. This is an important intention of Kim Jong Un to appear frequently on the international stage this year.
Therefore, when countries concerned to negotiate with the DPRK on denuclearization, they must give the DPRK a credible commitment and assistance in diplomacy and economic development and encourage its determination to disarmament. Without sufficient incentives, it is difficult for the DPRK to abandon its nuclear weapons unconditionally. The DPRK has stated many times recently that it will not unilaterally abandon its nuclear programs.
The prospect of the Korean nuclear issue depends not only on how much DPRK's willingness to abandon its nuclear power but also on the interaction of the concerned countries. While maintaining adequate pressure on the DPRK, it must also try to understand and respect its core interests. If the DPRK is treated in ways of domestication, order or even punishment, it will only frustrate the denuclearization process.
(If you want to contribute and have specific expertise, contact us at opinions@cgtn.com.)