Opinion: How to stop losing the fight against malaria
Andrea Boggio & Colin Ohrt 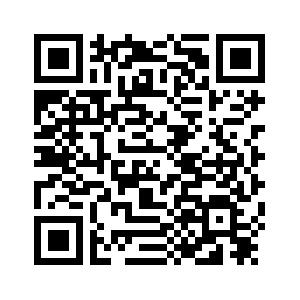 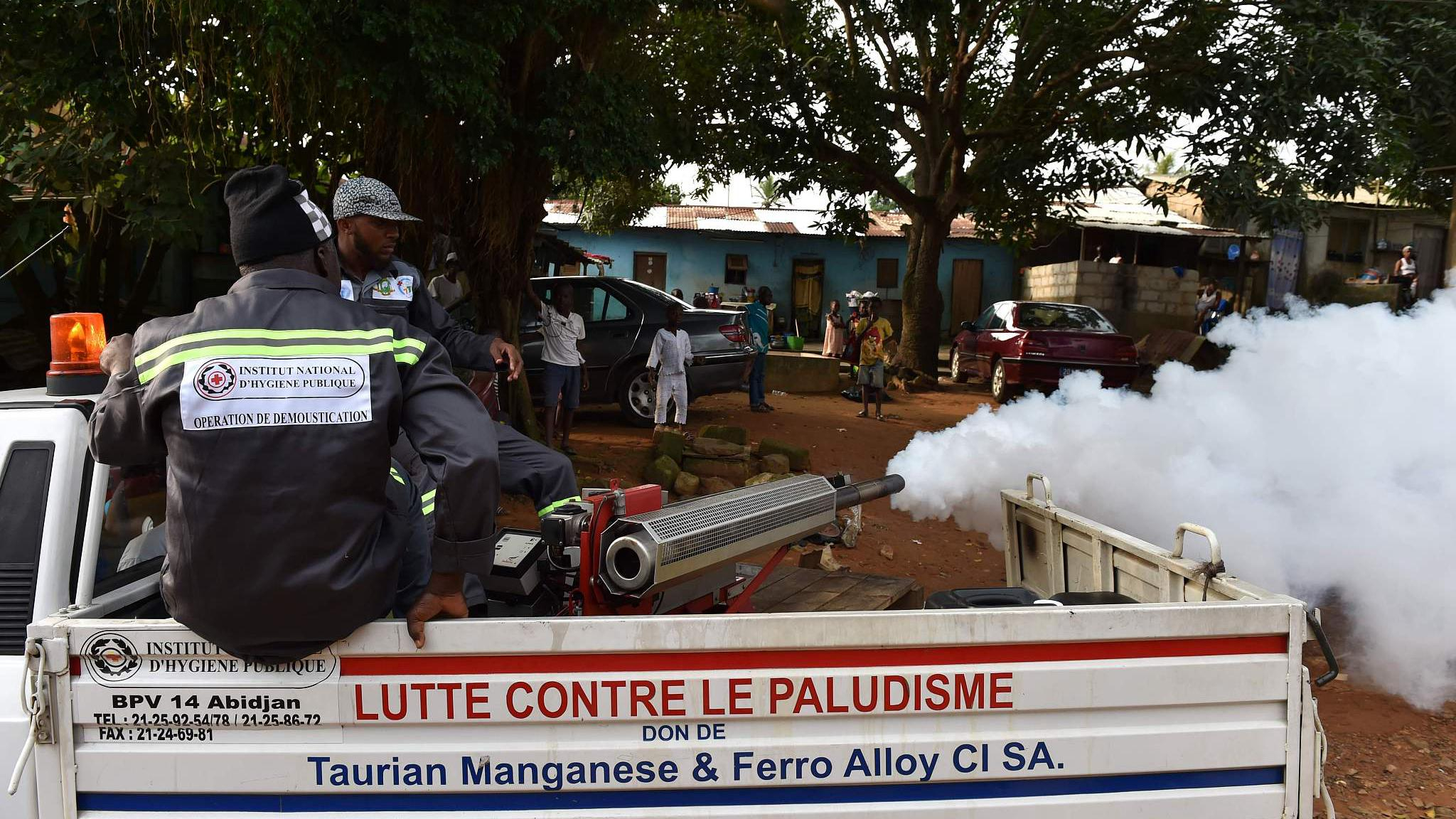 Editor's note: Andrea Boggio is a professor of legal studies at Bryant University, where he researches the intersection of health and science policy. Colin Ohrt, founding director of the Consortium for Health Action, is a physician who works on eliminating drug-resistant malaria. The article was first published on Project Syndicate on December 31, 2018. The article reflects the author's opinion, and not necessarily the views of CGTN.
When it comes to fighting infectious diseases, progress cannot be gauged by the availability of resources; the most important metric is the number of lives saved. By this measure, the world is on the verge of losing its battle with malaria.
After years of impressive gains, global efforts to combat the mosquito-borne illness have stalled.
According to the World Health Organization's most recent malaria report card, 219 million cases were reported in 2017, an increase of three million from the previous year. Moreover, while total annual deaths remained steady at about 435,000, declines in some regions reversed.
More alarming, the death toll could climb far higher. Data from the Consortium for Health Action – a nonprofit group committed to eliminating incurable malaria in Southeast Asia – shows a high risk of drug-resistant malaria spreading from Asia to Sub-Saharan Africa, the world's most malaria-affected region. This is not an unprecedented concern.
In the late 1950s, resistance to the anti-malarial drug chloroquine emerged in Cambodia and spread to (and throughout) Africa during the 1980s, resulting in a two to sixfold increase in malaria-related mortality. 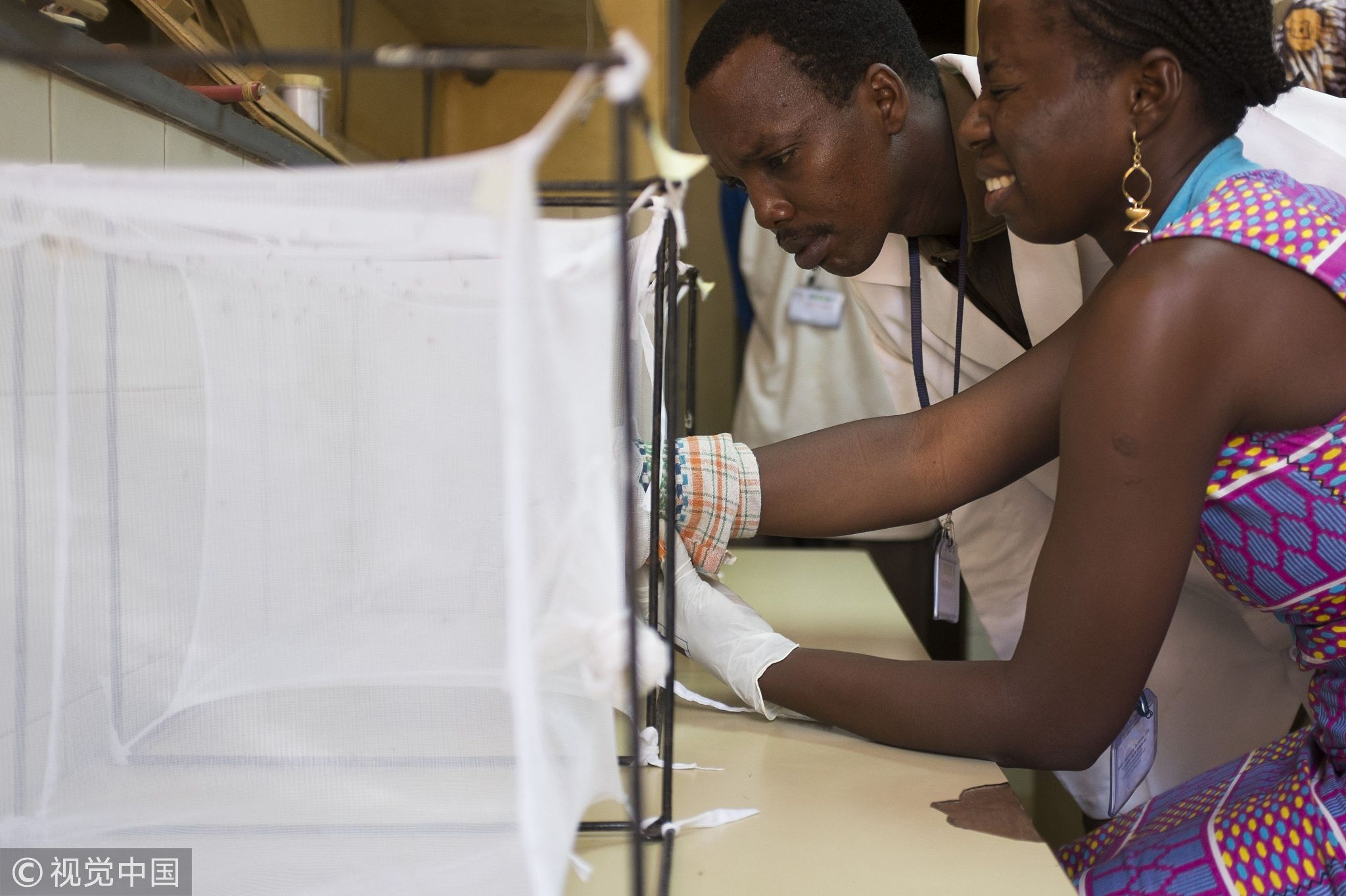 A volunteer puts her arm in a box with mosquitoes, as she tests the "Faso Soap," a soap aimed to repel mosquitoes and protect people from the malaria, during a laboratory test with volunteers, November 4, 2016. /VCG Photo

A volunteer puts her arm in a box with mosquitoes, as she tests the "Faso Soap," a soap aimed to repel mosquitoes and protect people from the malaria, during a laboratory test with volunteers, November 4, 2016. /VCG Photo

Without urgent and coordinated interventions, it could happen again, but much faster this time.
Fortunately, there are ways to reduce this likelihood; one of the most important is to expand prevention, screening, and treatment programs for those at high risk.
These include regional peacekeepers, a common, if often-overlooked, source of transmission of malaria parasites between Asia and Africa.
Security personnel in Southeast Asia are infected at high rates with plasmodium falciparum, a parasite that causes a deadly form of the disease. In 2016, for example, research led by the U.S. Armed Forces Research Institute of Medical Sciences (AFRIMS) in Bangkok found that 10 percent of military personnel in Northwest Cambodia were carriers.
When infected Cambodian soldiers were deployed to Africa, as many may have been between 2010 and 2016, virulent strains of malaria were at risk of being spread.
From Cambodia, the malaria parasite strains may move across Myanmar to India and Bangladesh, which account for about 15 percent of the current United Nations peacekeeping force. 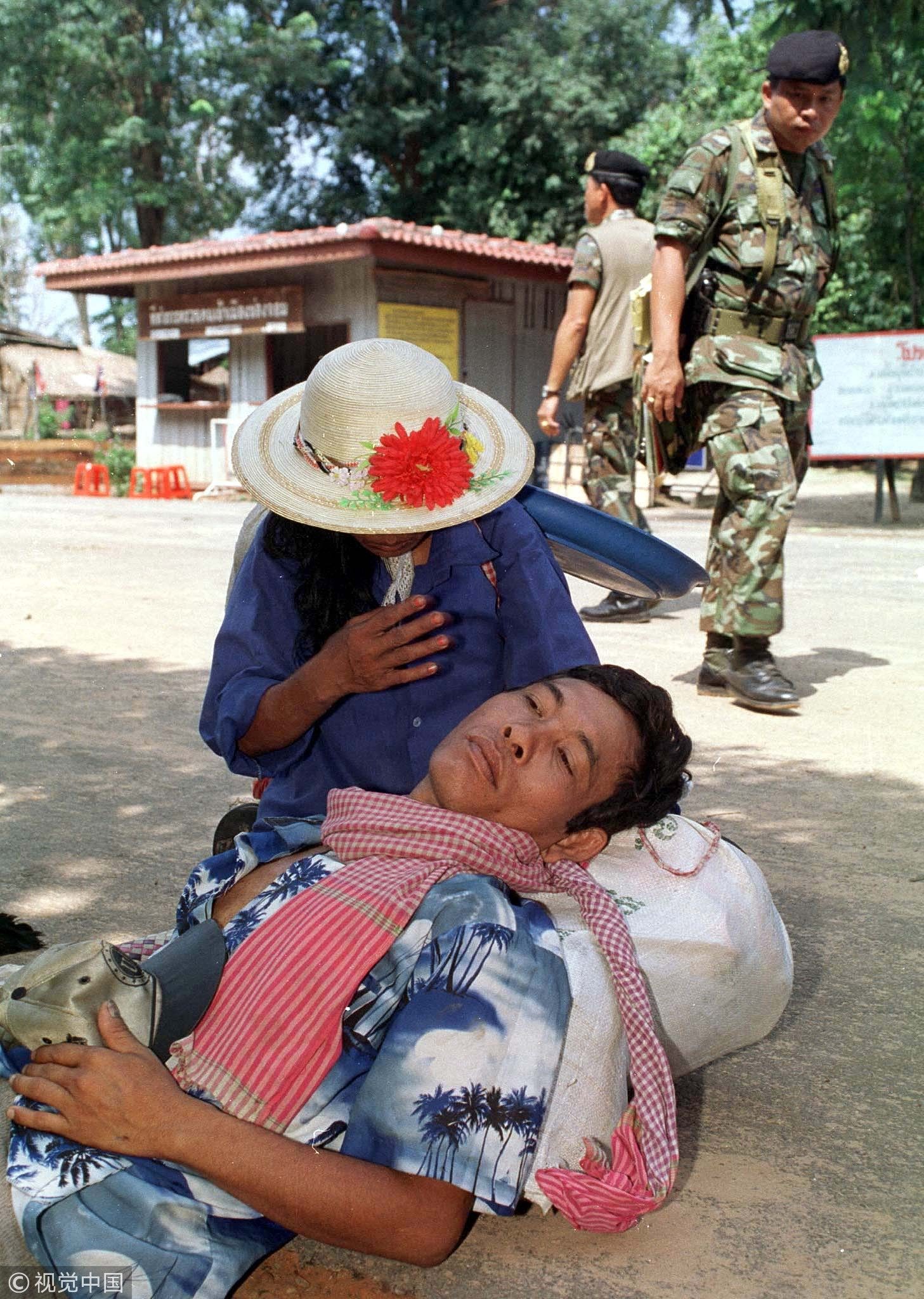 When Indian and Bangladeshi soldiers are stationed in Africa without malaria screening, the risk of deadly disease transmission may increase dramatically.
With pre-deployment testing, medication, and widespread use of insecticide-treated uniforms, this source of malaria migration could be contained. At the moment, however, most governments and aid organizations are maintaining a status quo that largely excludes these high risk groups.
For example, we have observed that treated mosquito netting, which is an effective means of disease prevention, is not distributed in high-transmission areas, and there the use of available netting is extremely low.
In 2015, the WHO set 2020 as a deadline for halting the transmission of plasmodium falciparum in Cambodia, and called for total elimination of malaria from Southeast Asia's Greater Mekong Subregion by 2030.
These ambitious targets are still achievable, but only if three key challenges are addressed.
First, a coordinated strategy is needed to target the disease in areas where transmission rates are highest, the so-called malaria islands. While many of the resources to accomplish this are already available, flexible funding and new partnerships will be essential to reduce infection rates among military, forestry, and police personnel, as well as other at-risk populations. 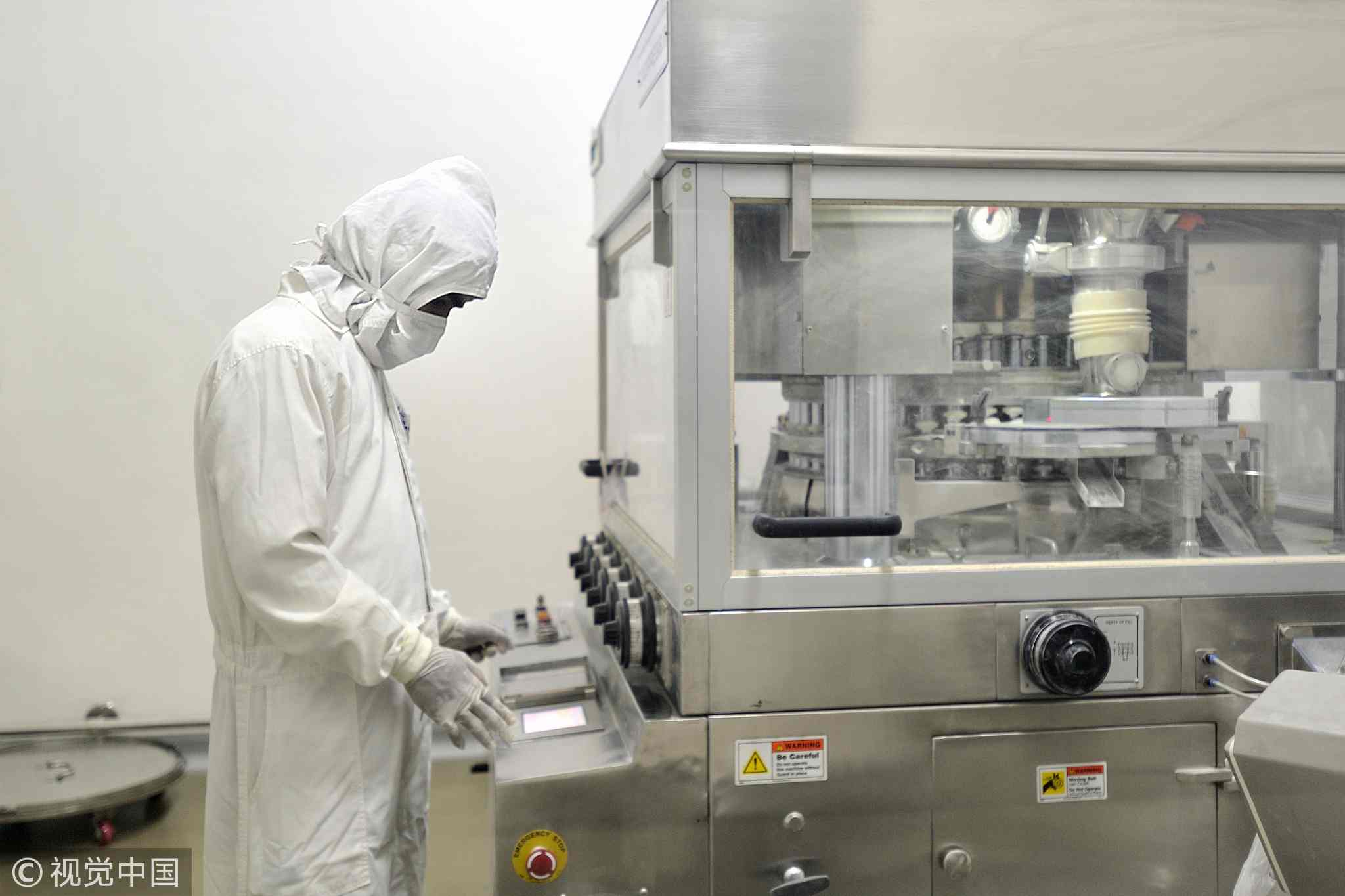 A man is operating a machine to manufacture antimalarial and antiretroviral drugs. /VCG Photo

A man is operating a machine to manufacture antimalarial and antiretroviral drugs. /VCG Photo

Second, the international donors must recognize the urgency of the looming malaria pandemic. At the moment, their commitment is still insufficient. For example, The Global Fund, one of the world's most important anti-malaria supporters, suffers from a lack of funding effectiveness.
Aid recipients in the region complain that the Fund's money cannot be used for several unmet needs, including pay-for-performance incentives to motivate staff. The Global Fund justifies its approach as necessary to ensure long-term program sustainability and host-country participation.
But, faced with a public-health emergency in Southeast Asia, and by extension, Africa, insisting on rigid adherence to the standard funding rules, may be penny wise but pound foolish.
And, finally, we need new sources of money. A natural place to look is the United States military, for whom malaria is the number one infectious disease threat in the region. Unfortunately, the U.S. Department of Defense has declined to offer anything more than research support, which may lead to a few extra publications, but will not help eliminate this malaria threat. 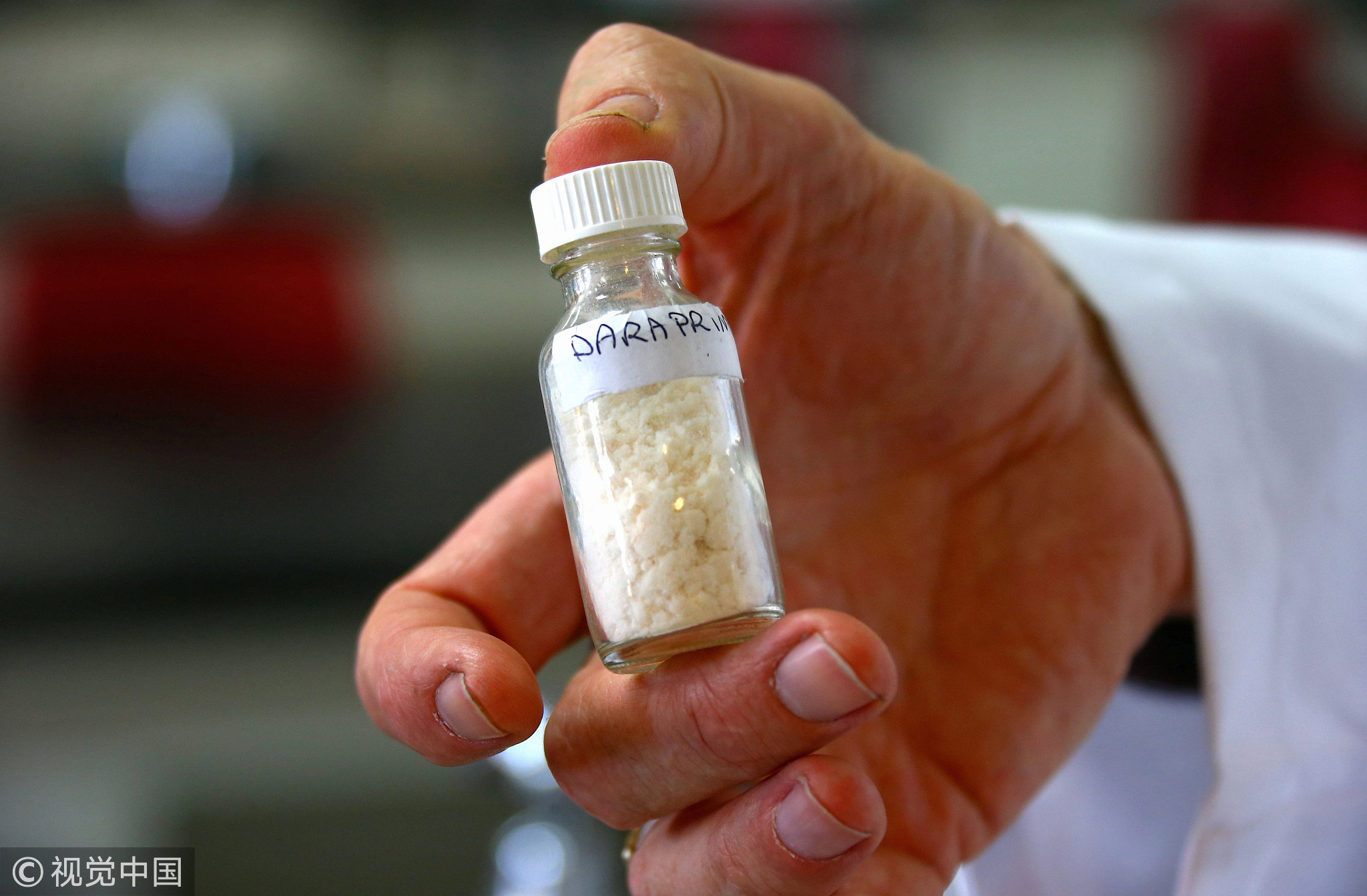 A school teacher holds a small jar of the compound of an anti-parasitic medicine used to treat malaria in Australia, December 2, 2016. /VCG Photo

A school teacher holds a small jar of the compound of an anti-parasitic medicine used to treat malaria in Australia, December 2, 2016. /VCG Photo

Barring a change of heart, philanthropic organizations – especially the Bill & Melinda Gates Foundation – will be essential to filling the effective funding void, especially by offering financial incentives for implementing effective elimination operations.
With the right level of support and coordination, we can eliminate multidrug-resistant falciparum malaria in Southeast Asia.
The alternative – poor implementation, ineffective spending, and misdirected research – will mean that still-evolving malaria parasites will eventually reach Africa, a deadly scenario that would turn back the clock on decades of progress.
Copyright: Project Syndicate, 2018.
(If you want to contribute and have specific expertise, please contact us at opinions@cgtn.com.)