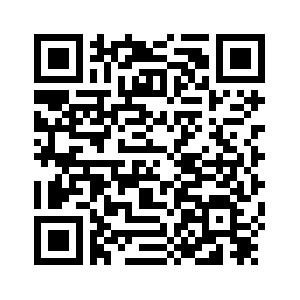 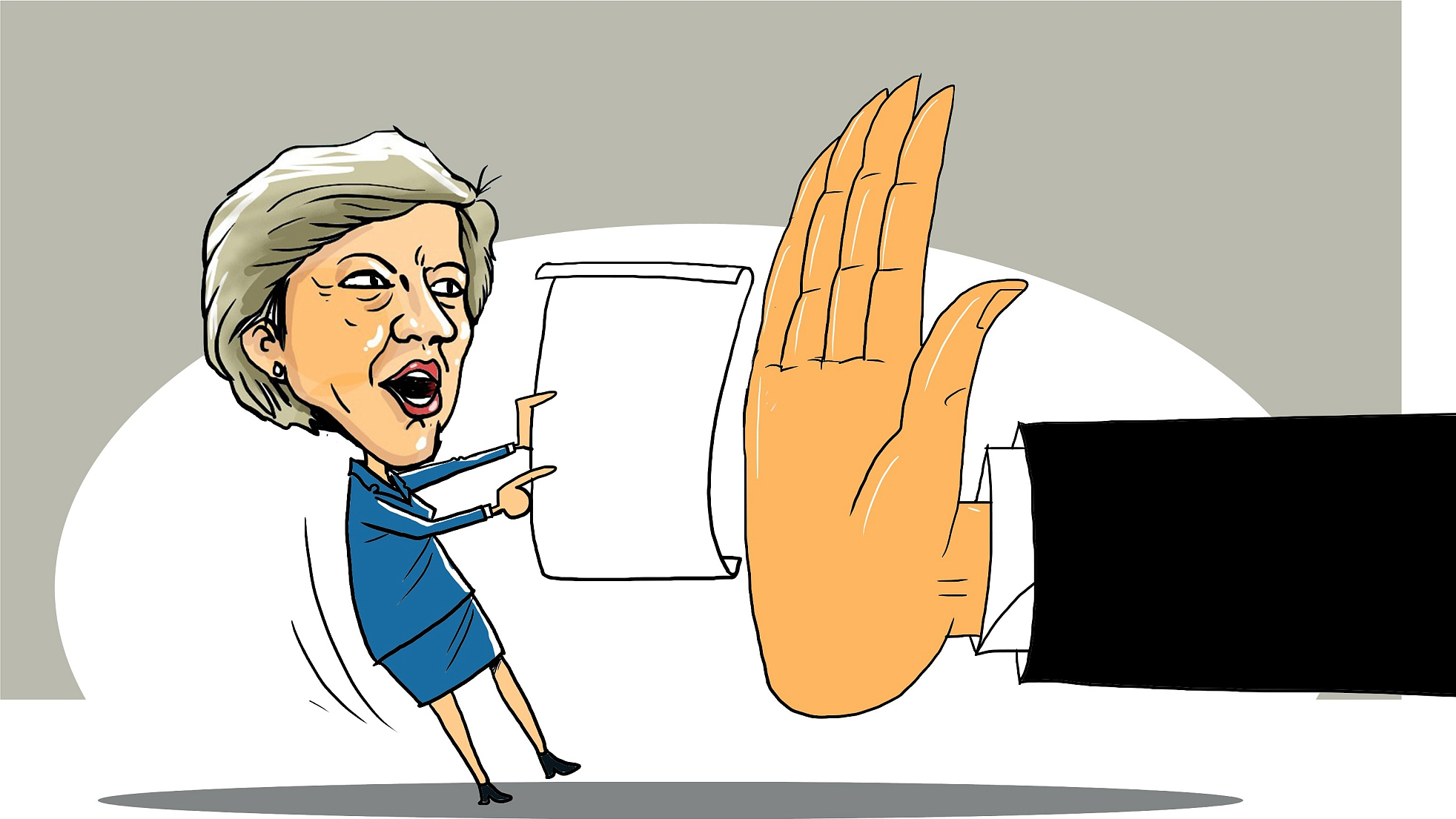 Editor's note: Tom Fowdy is a UK-based political analyst. The article reflects the author's views, and not necessarily those of CGTN.
Tuesday night saw the inevitable happen. Theresa May's widely criticized Brexit plan was defeated in the House of Commons by an overwhelming majority that included 118 of her own MPs, who followed through on their very vocal opposition to it.
It was a result to be expected, but one which poses large questions for the future of the United Kingdom. With Brussels refusing to offer any alternatives to May's proposals, and with the Labour Party having tabled a vote of no confidence against May's government, the next few days serve to be a defining time for where the country will end up.
With the floor now being open to forces seeking to force a harder Brexit, as well as those seeking to stop Britain's departure all together, nothing is quite certain anymore. 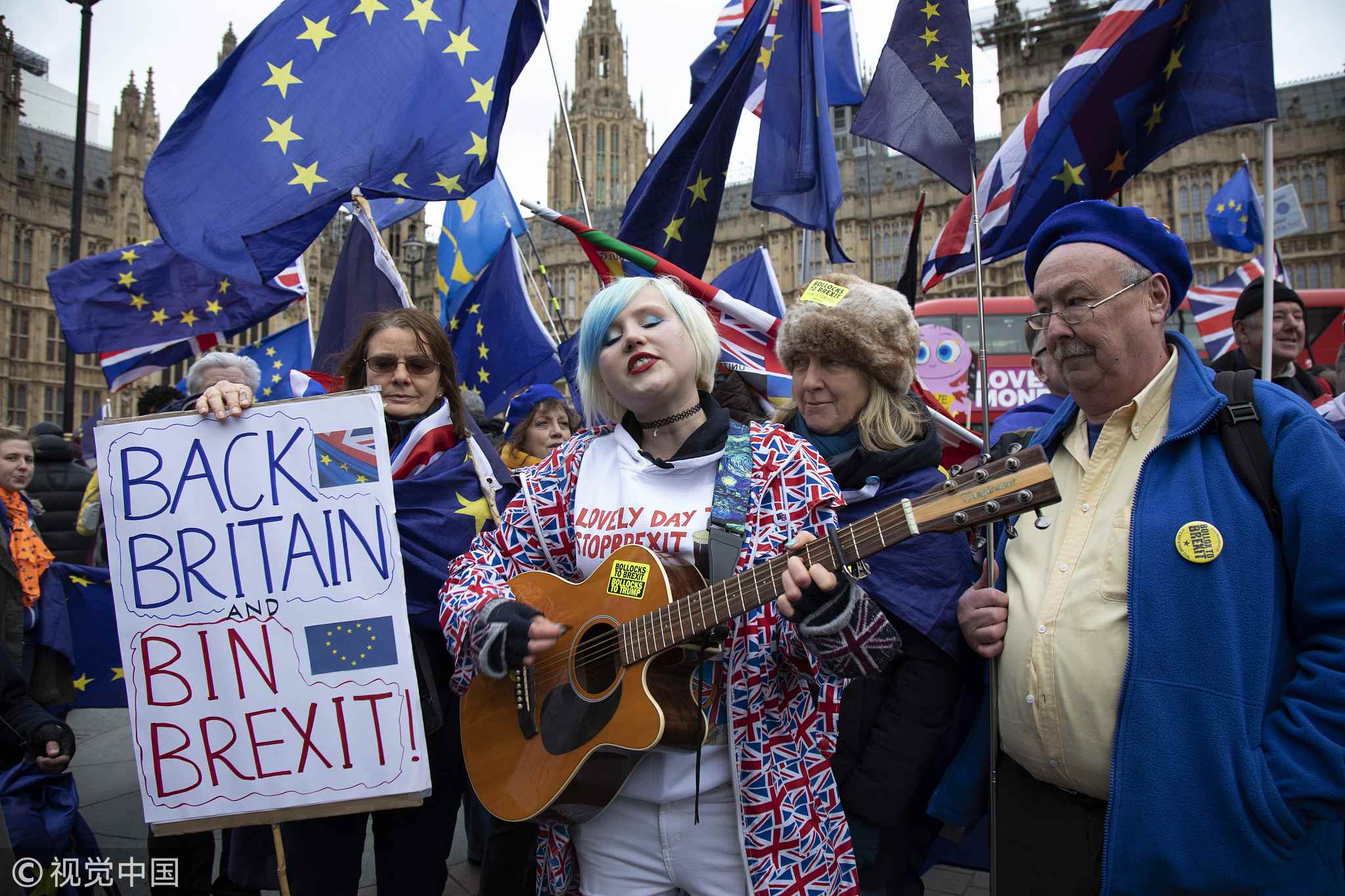 Where it did all go wrong for Theresa May? Two years previously when she took office, she seemed powerful and confident. Her party was soaring in the polls as Jeremy Corbyn's Labour languished far behind in a state of complete disarray. For her, the outcome as to what could happen seemed definitive.
Analyzing her position, she had a golden opportunity to enhance her leverage against Europe by strengthening her political legitimacy at home, sweeping away the opposition and landing an enormous majority. Given this, she might be forgiven for having been tempted to call a general election. She really believed it was her moment. As a result, she upped expectations by showcasing a belligerent approach to Brussels.
Then it all fell to pieces. A woeful election campaign would expose the Prime Minister as out of touch and unable to connect with the general public. Far from setting the stage of nationalist confrontation against Europe, instead Theresa's bid became littered with shocking policies which saw public confidence in her evaporate.
Despite having been 25 points behind at the starting line, the Labour Party were able to look past their differences and seize the narrative. What followed would become a national embarrassment for May. Although she would retain power, she would return to office weaker, and humiliated, forced to govern without a working majority and relying on the Democratic Unionist Party of Northern Ireland. Unquestionably, those in her party were furious. 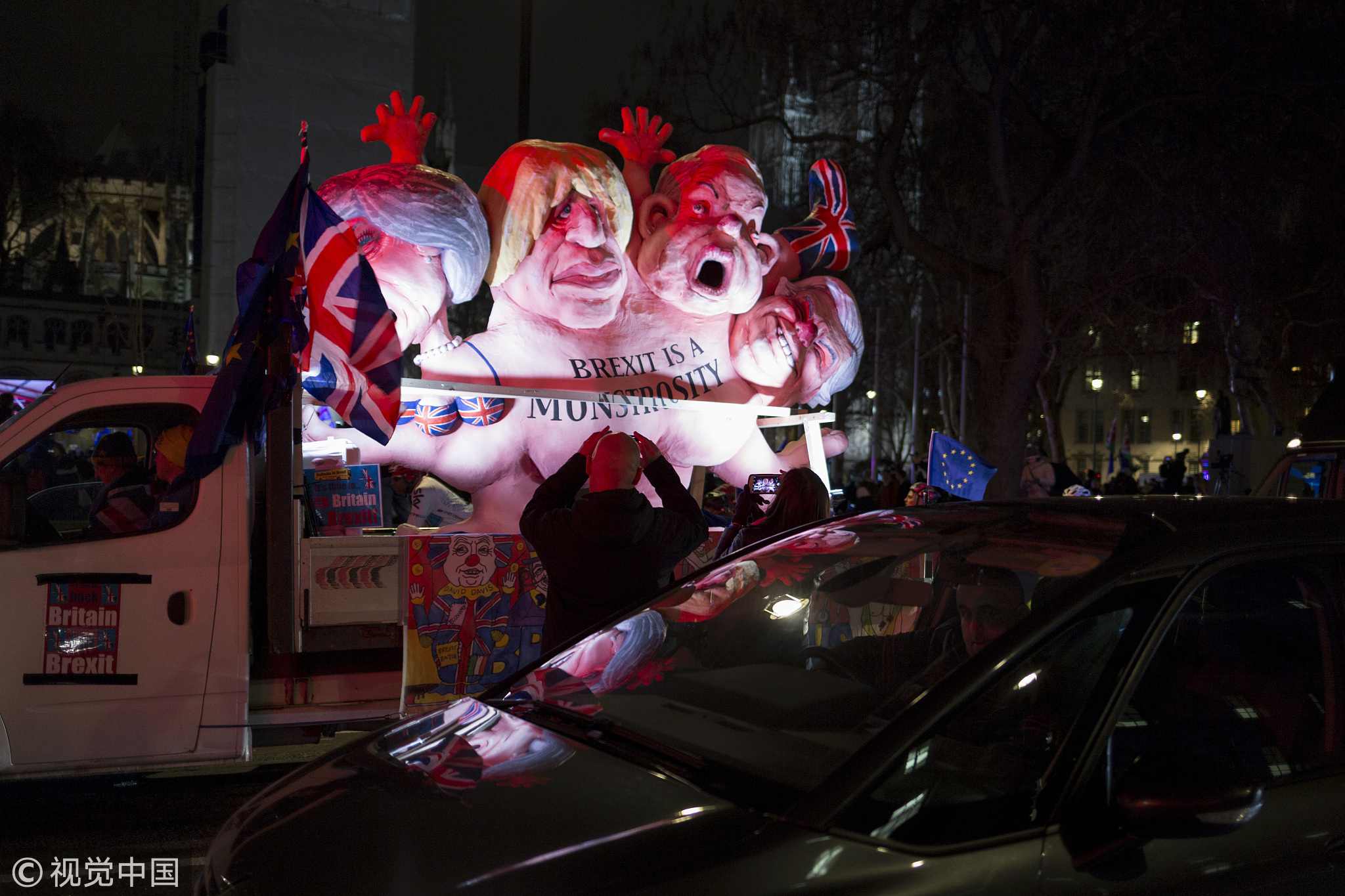 Cyclists and a political parody in Westminster before the result of MPs'  Brexit vote which eventually brought about a massive defeat for Prime Minister Theresa May's Conservative government, on January 15, 2019, in Westminster, London. /VCG Photo.

Cyclists and a political parody in Westminster before the result of MPs'  Brexit vote which eventually brought about a massive defeat for Prime Minister Theresa May's Conservative government, on January 15, 2019, in Westminster, London. /VCG Photo.

The knives were readily sharpened. Instead of delivering a solid majority which would offer her authority in leading negotiations to her preference, she now found herself reliant on the loyalty of her party's Euroskeptic right to follow her demands. No longer could this group be ignored or dismissed as a nuisance, but their power in the process was amplified.
Having already upped expectations and drawn ambitious red lines publicly, May had set her own trap. Thus, when negotiations with Europe inevitably steered towards realism and pragmatism, creating inevitable compromise, this group now had the power to create scathing discontent against her plans.
It is no surprise that the eventual deal produced was a non-starter. The concept of a “Brexit backstop” with Northern Ireland, rendering that part of the country in the Customs Union and potentially weakening its affiliation with the UK was the last straw.
Given both sides found no solace whatsoever in her proposals, what emerged was an unusual alliance of polarized interests, with right-wing Euroskeptics teaming up with those seeking to end Brexit to kill Theresa's deal for once and for all. The rebels weren't bluffing either, and down it fell. The so-called “center ground” which May had said was attuned to compromise, collapsed. 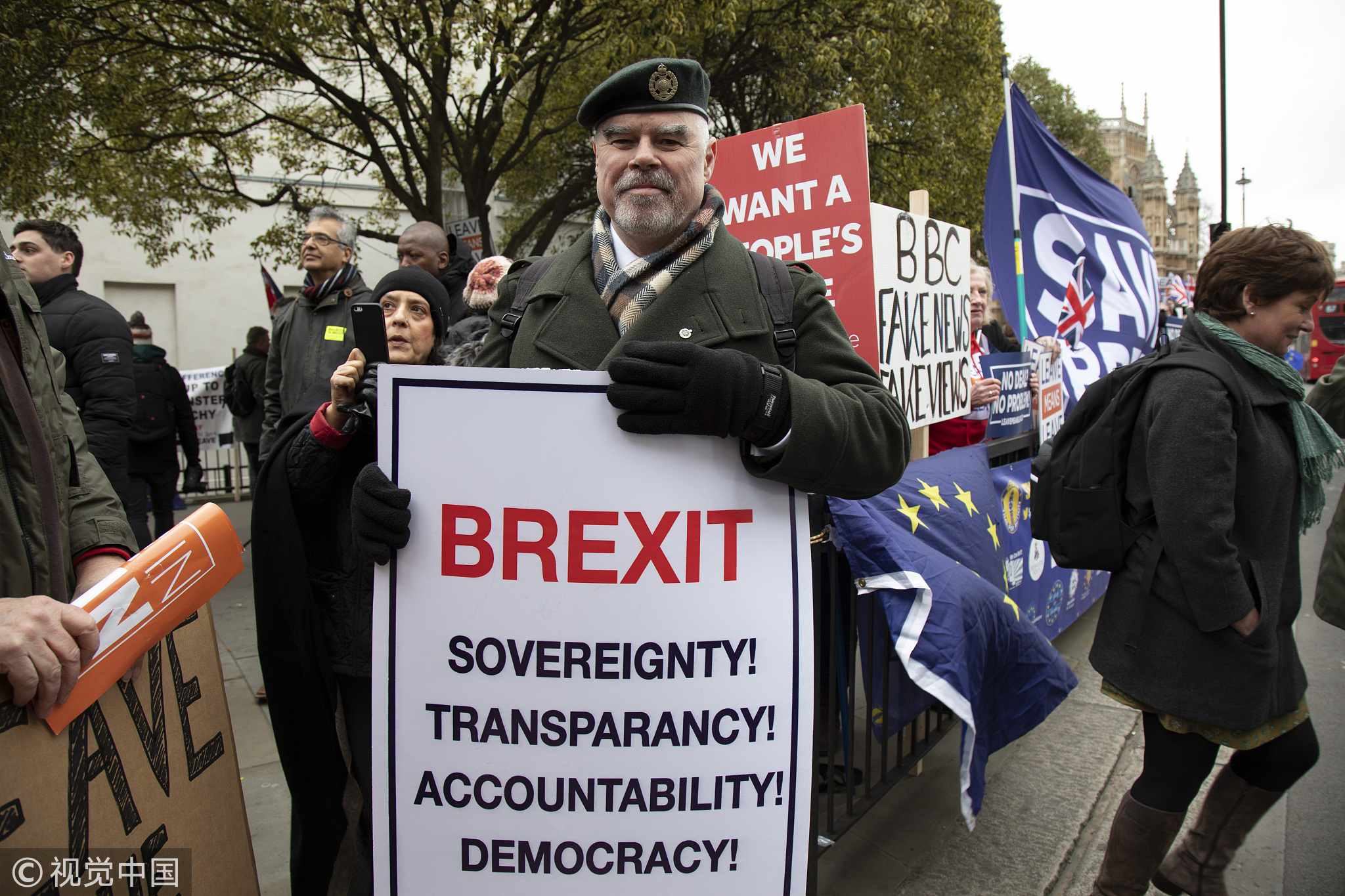 Now, the floor is opened for both sides to battle over what happens next. There was no pause about it. Immediately following the deal's demise, pro-remain voices quickly called out the need for a second referendum to be the logical step forward. However, that remains unlikely. The vast majority of Conservative MPs, including a small number in the Labour Party, are opposed to this idea. Such an initiative lacks a majority in Parliament.
As a result, all eyes should be on what happens to May herself. Undoubtedly, her entire political legacy and platform have been destroyed. The Labour Party have tabled a vote of no confidence. If it passes, the government will be dissolved and a general election must be called.
However, despite the undisguisable inadequacy of the prime minister, Conservative MPs are not likely to support this, not least as it poses the risk of a Labour government. Instead, we should expect again her party to challenge her. With seemingly little pathway forward for the PM, those on the party's right wing will be eyeing an opportunity to try and take control, perhaps with the ambition of forcing Brussels to renegotiate under a real threat of a “no deal.” If there is no election, then ultimately there is no other way the party can move other than rightwards.
In summary, Britain's future is now up for grabs. The political vacuum created by May's anticipated failure opens up a whole range of possible outcomes. Even if some are more likely than others, one should not bank on any in particular. Either way, the situation can be aptly defined as “Hard Brexit vs No Brexit” and how this pans out might be anyone's guess. The next few days will have decisive influence in setting that course. Let's wait and see.
(If you want to contribute and have specific expertise, please contact us at opinions@cgtn.com)