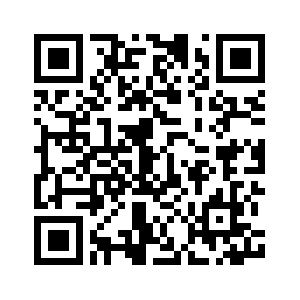 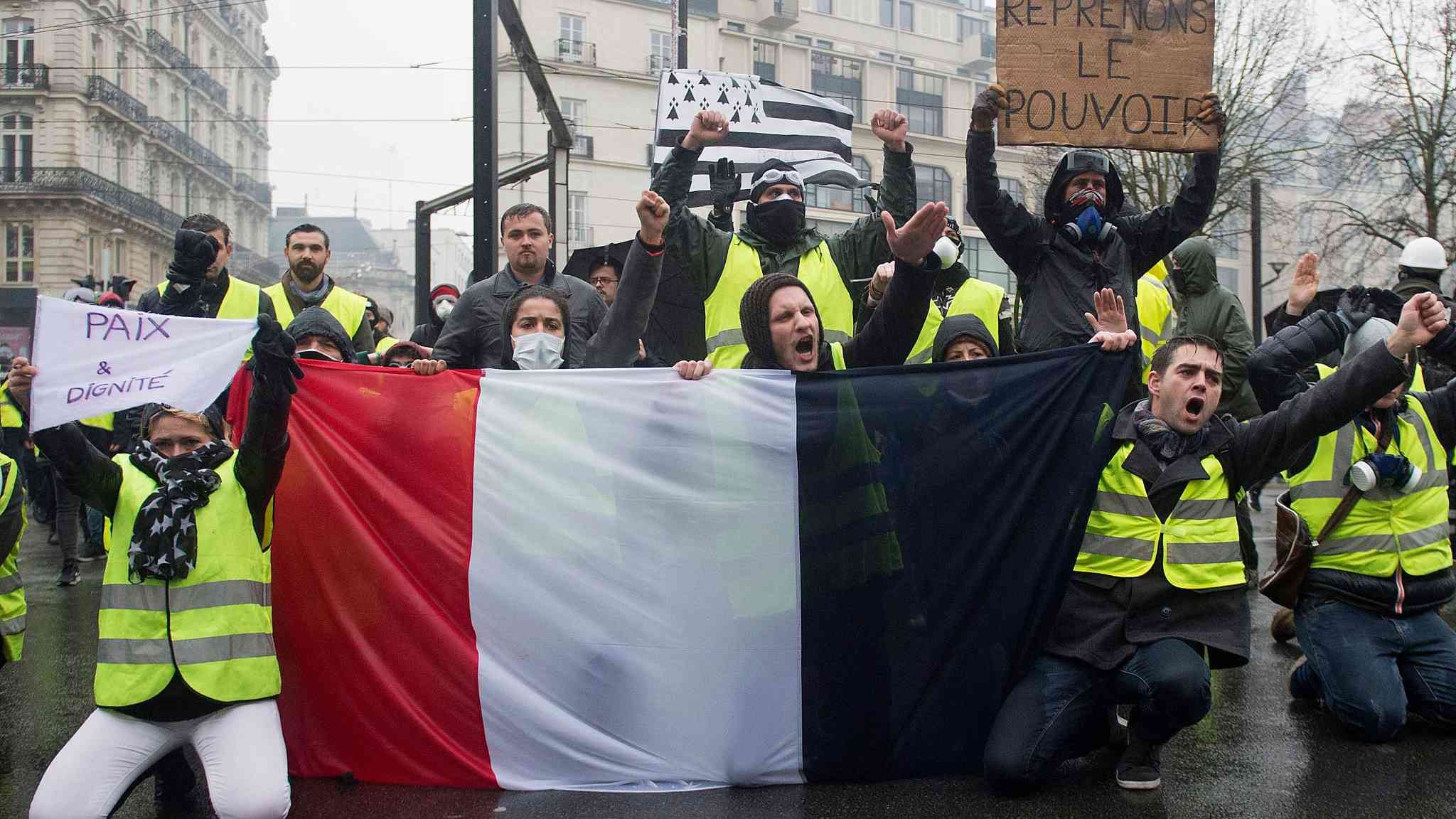 The French government was on Sunday hoping the sharp drop in "yellow vest" demonstrators signaled an end to the biggest crisis of Emmanuel Macron's presidency but conceded "mistakes" had been made.
Around 66,000 people turned out again on Saturday across France for the fifth round of protests, which sprung up over fuel tax hikes last month before snowballing into broader opposition to Macron, half the number of the previous weekend.
In an interview with Les Echos newspaper published online Sunday evening, French Prime Minister Edouard Philippe said the government had "made mistakes" and "not listened enough to the French people."
He added that there would be a debate on the holding of referendums to help decide government policies, one of the protesters' key demands, saying they could be a "good tool of democracy." 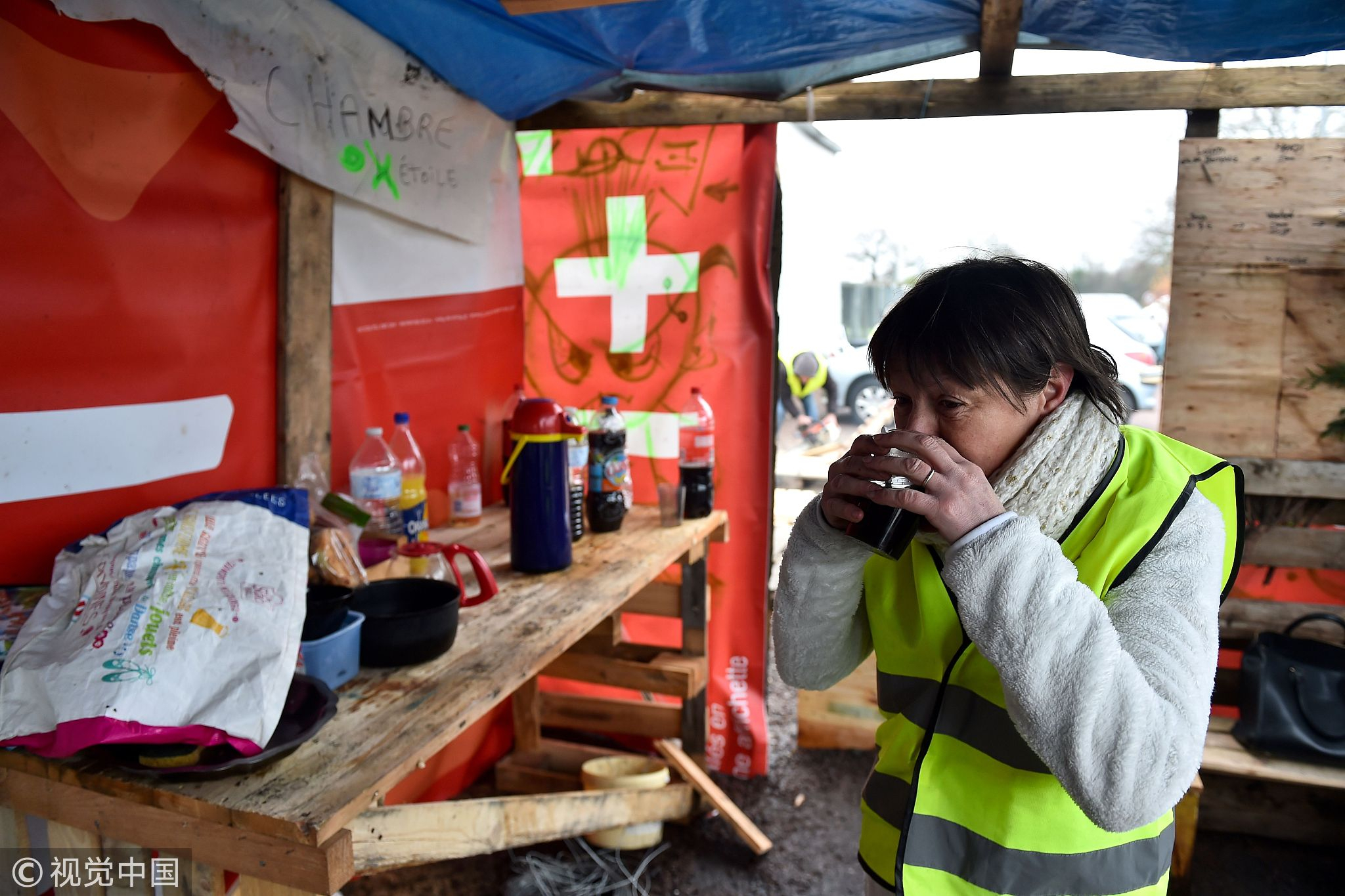 A protester drinks coffee at the "yellow vest" headquarters, "The Village of the Gauls," in Sable-Sur-Sarthe, northwestern France, December 16, 2018.  /‍VCG Photo

A protester drinks coffee at the "yellow vest" headquarters, "The Village of the Gauls," in Sable-Sur-Sarthe, northwestern France, December 16, 2018.  /‍VCG Photo

"One stage is behind us, certainly," added Education Minister Michel Blanquer. "And I think that is in everybody's interest, including the yellow vests."
Although the drop in protesters suggested the momentum of the "yellow vest" movement was waning, sociologist Herve Le Bras from the School of Advanced Studies in the Social Sciences (EHESS) warned they would leave a bitter legacy.
"It is calming down but what remains of it all is a strong feeling of hatred towards Macron," said Le Bras.
Many of the protesters have targeted Macron personally, calling on him to resign or attacking his background as an investment banker.
Le Bras said the protests had underlined the depth of dislike for the president's personality and style of governing, which critics see as arrogant and too distant.
A major poll by the Ifop group published in Journal du Dimanche newspaper showed Macron's approval rating had slipped another two points in the last month, to 23 percent.
The proportion of people who declared themselves "very dissatisfied" by his leadership jumped by six points to 45 percent.
An Opinionway poll for LCI television, however, registered a two-point increase to 31 percent overall. The poll was carried out in the aftermath of Tuesday's deadly attack on Strasbourg's Christmas market.

Until last week, a clear majority of French people backed the protests, which sprung up initially over high taxes before snowballing into broader opposition to Macron. 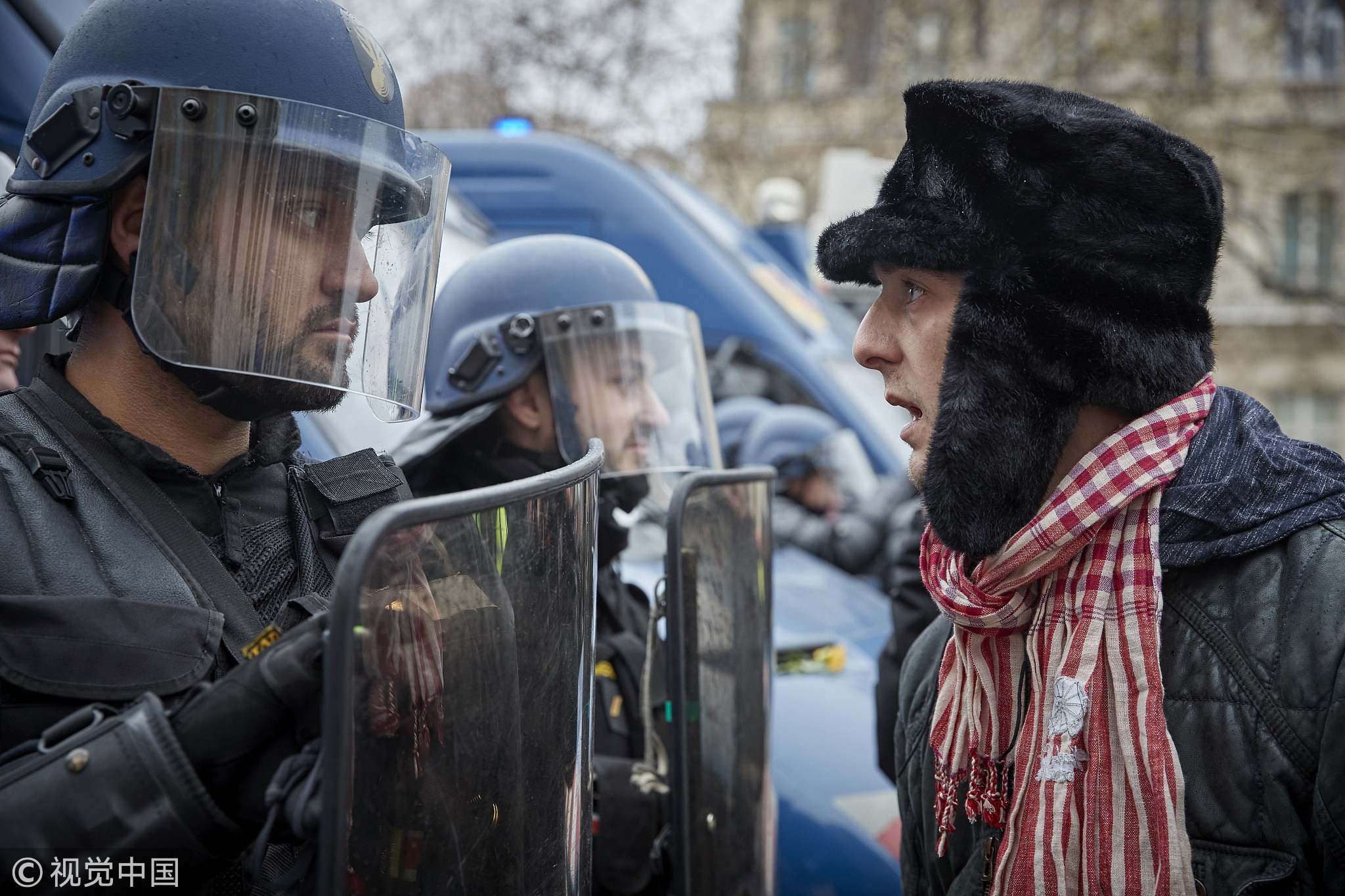 A "Gilet Jaune" protester confronts a French CRS policeman during protests at the Champs Elysees in Paris, December 15, 2018. /VCG Photo

A "Gilet Jaune" protester confronts a French CRS policeman during protests at the Champs Elysees in Paris, December 15, 2018. /VCG Photo

In a bid to end the standoff, he announced a package of measures for low-income workers on Monday in a televised address, estimated by economists to cost up to 15 billion euros (17 billion U.S. dollars).
The 40-year-old also acknowledged widespread animosity towards him and came close to apologizing for a series of verbal gaffes seen as dismissive of the poor or jobless.
Two polls published last Tuesday, in the wake of Macron's concessions, suggested the country was now split broadly 50-50 on whether the protests should continue.
"It's a movement that has succeeded in forcing back what looked like a strong government," Pollingvox's Sainte-Marie said.
"People have confidence in themselves now, so things won't return to how they were on November 15 before the protests started," he said, adding that "The context in which Emmanuel Macron holds power has changed."
The president had until now styled himself as a determined pro-business reformer who would not yield to pressure from protests like his predecessors.
However, the government has announced a six-month consultation with civil society groups, mayors, businesses and the "yellow vests" to discuss tax and other economic reforms.
Hikes in petrol and diesel taxes, as well as tougher emissions controls on old vehicles, justified on the grounds of environmental protection, were what initially sparked the "yellow vest" movement.

Philippe said in Sunday's interview that the deficit was expected to increase slightly in 2018 to reach 3.2 percent of GDP, taking into account the measures taken in the face of the crisis. 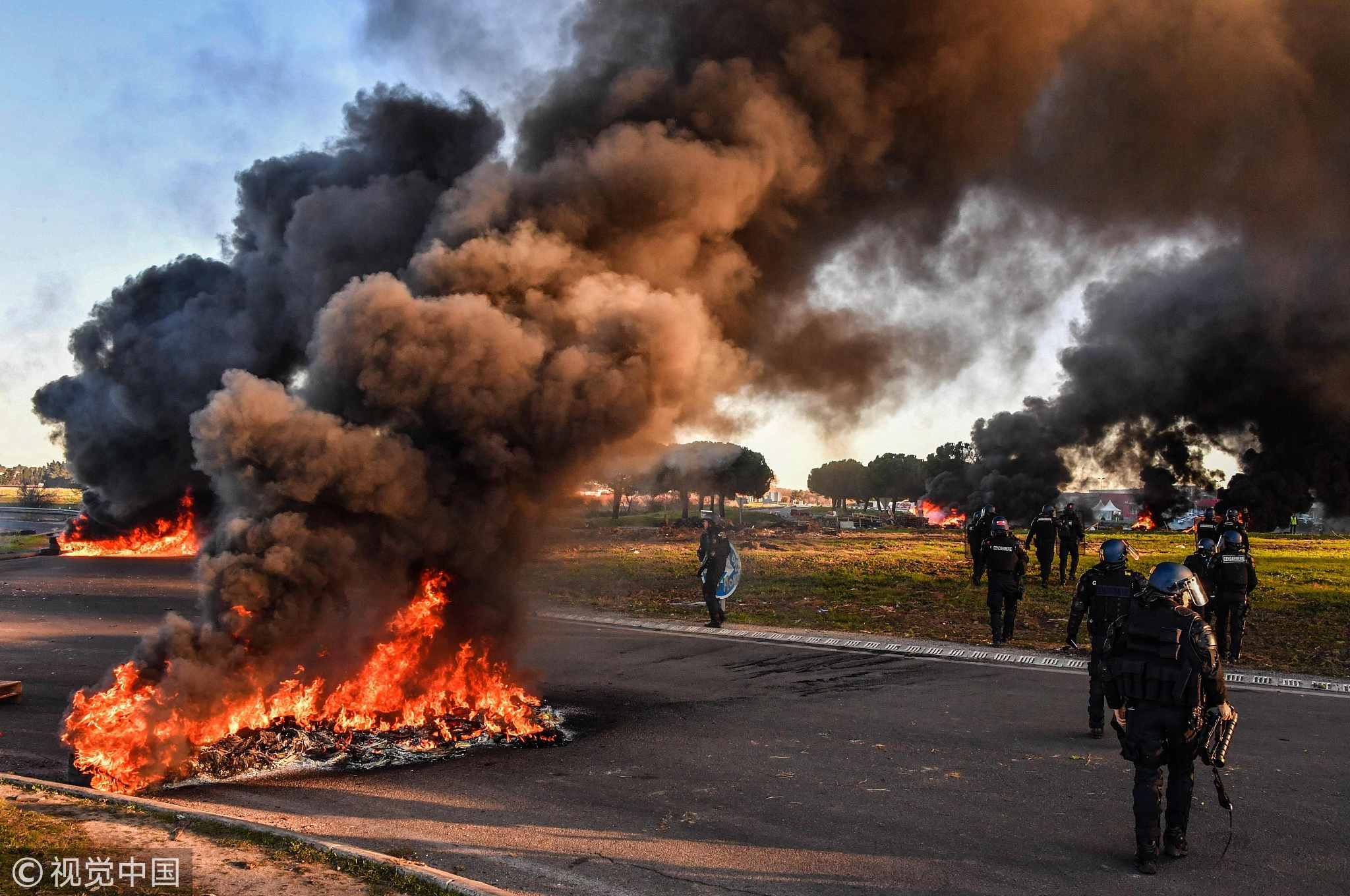 Riot police walk by tire fires as they disperse demonstrators from a crossroad blockade in Aimargues, near Montpelier, southern France,  December 11, 2018. /VCG Photo

Riot police walk by tire fires as they disperse demonstrators from a crossroad blockade in Aimargues, near Montpelier, southern France,  December 11, 2018. /VCG Photo

To mitigate this, the government would limit the reduction in the corporate income tax rate to companies with a turnover of fewer than 250 million euros (226 million U.S. dollars) next year, he added.
Eight people have died since the start of the protests, the authorities said.
Interior Minister Christophe Castaner earlier called on protesters to halt their blockades across the country which have disrupted traffic and businesses.
"Everyone's safety has to become the rule again," he tweeted. "Dialogue now needs to unite all those who want to transform France."
Around 69,000 security forces were mobilized across France on Saturday, down from 89,000 the previous weekend, when 2,000 people were detained.
(Top image: Protesters stand behind a French flag during a demonstration in Nantes, western France, December 15, 2018. /VCG Photo)
Source(s): AFP