Theresa May leaves with a legacy of failure
Tom Fowdy 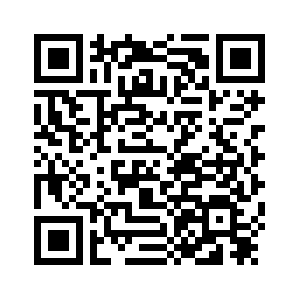 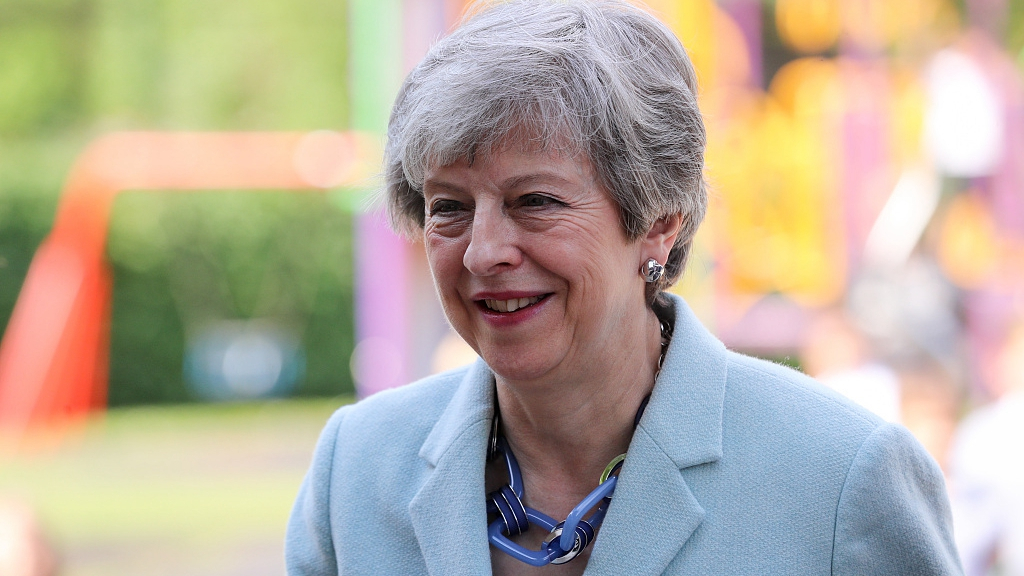 Editor's Note: Tom Fowdy, who graduated from Oxford University's China Studies Program and majored in politics from Durham University, writes about international relations focusing on China and the Democratic People's Republic of Korea (DPRK). The article reflects the author's opinions, and not necessarily the views of CGTN.
On Friday morning British Prime Minister Theresa May announced in front of 10 Downing Street that on June 7 she will resign as leader of the Conservative Party, paving the way for a leadership contest which will determine who will replace her as the next prime minister of the United Kingdom.
The resignation comes amid renewed internal pressure from cabinet ministers for her to quit, with no way forwards having been found for her Brexit withdrawal agreement which has been repeatedly defeated within the House of Commons. Former foreign secretary and arch-Brexiter Boris Johnson has already announced that he will contend for the position.
Theresa May will leave office with a dark cloud hovering over her. Undoubtedly, she will be remembered as one of the weakest and least successful prime ministers of the modern era, her premiership being dogged by the chaos and indecisiveness of Brexit. Having so fatally miscalculated and thrown away her parliamentary majority in the 2017 general election, Theresa May would make one mistake after another in not only dealing with Europe, but also with her own party.
The knives have been out for her for a long time, yet she clung on until the very end, clutching fiercely onto her version of Brexit which soon found her cornered by all sides. Now that the way is cleared, the eurosceptic wing of the party will fancy their chances at claiming the leadership of the party, eager to push through a harder and less compromising Brexit. Britain's fate hangs in the balance. 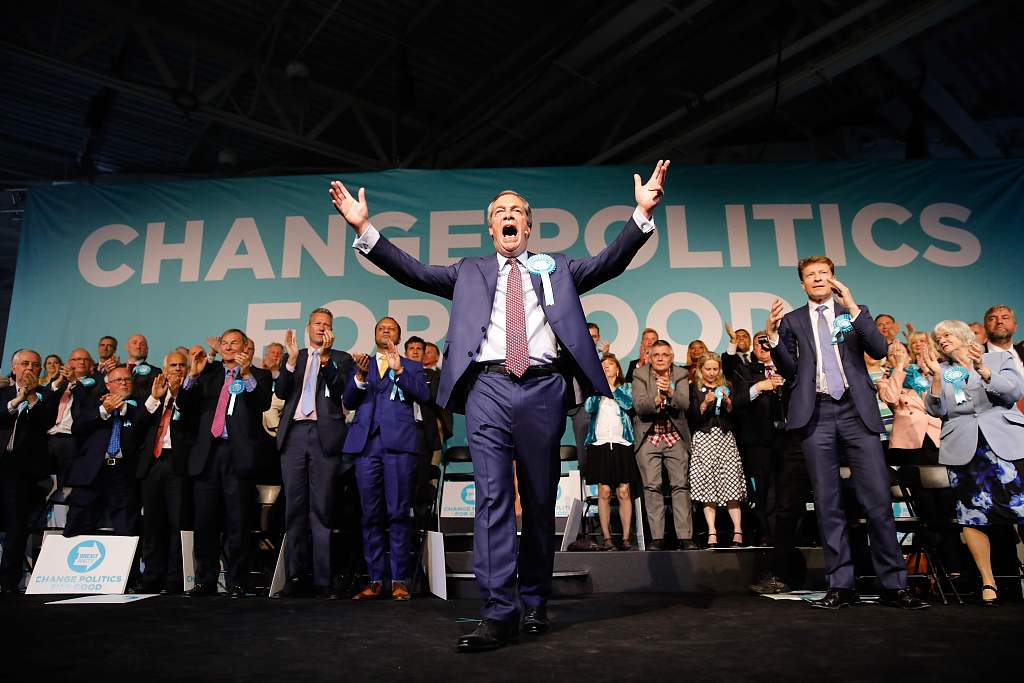 The prime minister is set to leave Downing Street tainted with the failure to deliver the very thing all of her political capital, priority and stakes were vested upon. Yet, it wasn't always that way. Theresa May's ascendency to power once seemed triumphant. Having served as home secretary and staunchly supported David Cameron, she commanded the support of the party's mainstream in the 2016 leadership contest and brushed her opponents aside easily. As she took office the Labour Party had descended into a state of political chaos, placing her in a pole position of 25 points ahead in the polls. She seemed almost invincible.
But as they say, a week is a long time in politics. All of a sudden, everything went wrong. Sensing apparent Labour's weakness, the prime minister declared a general election with the aim of taking control and seizing a massive majority. She urged the country to get round her on Brexit and declared triumphantly to Europe she was coming with a huge mandate for a serious deal. Then it all fell to pieces. Throughout the campaign, the prime minister appeared robotic, out of touch and plastic. As Labour regrouped with a strong message, a last minute surge saw a shock result which saw May lose her majority. She would return to parliament weaker, forced to rely on the support of the Democratic Unionist Party.
It's fair to say she never recovered from the ordeal. Politically hamstrung, May was now more reliant on the voting support of eurosceptics than ever. Yet, faced with the reality that Brussels were never going to offer the type of concessions which she had set out, her efforts to compromise with the party's right were ultimately in vain. Thus, when the predictable pragmatic deal with the EU emerged the party's eurosceptics were never going to support it. Utilizing their newly found leverage, her own party subsequently moved to undermine her deal and see it blocked not once, twice, but three times. Before Britain knew it, Brexit itself would end up delayed. 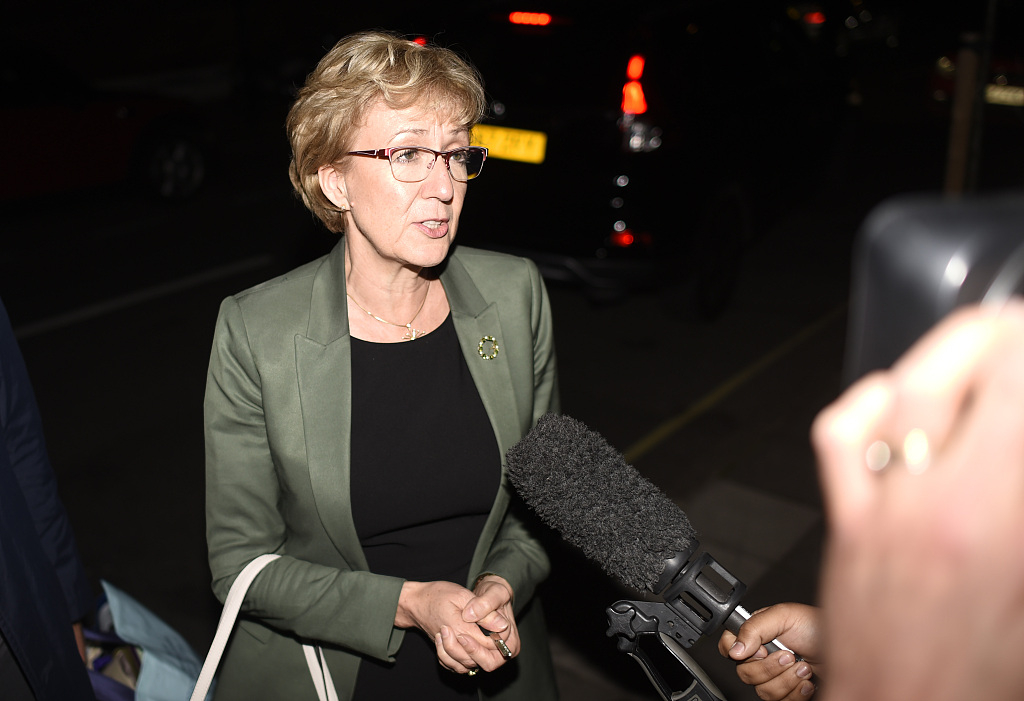 Former Leader of the House of Commons, Andrea Leadsom, arrives at her home after announcing her resignation from government on May 22, 2019 in London, England. /VCG Photo

Former Leader of the House of Commons, Andrea Leadsom, arrives at her home after announcing her resignation from government on May 22, 2019 in London, England. /VCG Photo

Yet Theresa May refused to face the music. Stubbornly and persistently, she clung on, holding out on her deal for as long as possible. In doing so, she appeared to lose touch with reality itself, even to the point of attempting to negotiate with the rival Labour Party, who was never going to save her skin at their own political expense. Thus, as Jeremy Corbyn pulled out of negotiations with the government and vowed to oppose any new attempts for her to put her deal to the commons vote. With all political doors now shut on the prime minister, there was no denying that her time was truly up. When the curtains close, it is time to leave the stage. It is fair to say, she had been still stood there for some time.
With a leadership contest now formally announced, the party's eurosceptics will ultimately fancy their chances to jump into Downing Street and force a renegotiation of Brexit, perhaps even calling another election afterwards. The challenge of course won't be straightforward, for whosoever replaces her is set to inherit a legacy of failure. Thus, the next few weeks may prove decisive for Britain's future.
(If you want to contribute and have specific expertise, please contact us at opinions@cgtn.com.)