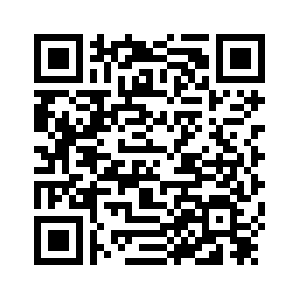 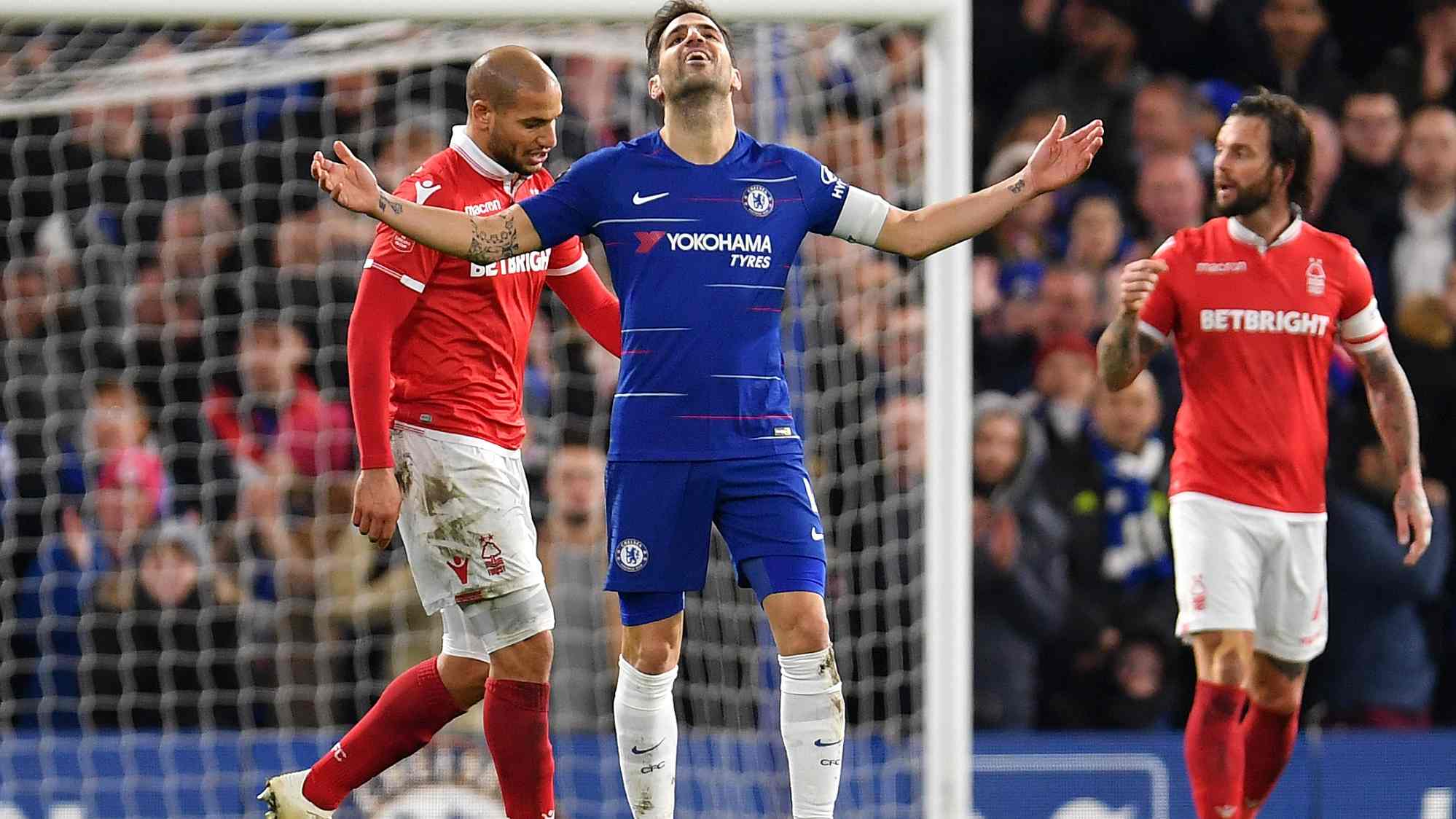 Alvaro Morata scored twice as holders Chelsea began their FA Cup defense with a 2-0 win over Nottingham Forest in a match where a tearful Cesc Fabregas appeared to bid farewell to English football.
The third round is the stage where top-flight clubs enter the world's oldest senior knockout football tournament and has traditionally been associated with upsets.
But there was only one "giant-killing" on Saturday with third-tier Gillingham beating Premier League Cardiff 1-0.
Championship side Bristol City defeated top-flight basement club Huddersfield by the same score thanks to Josh Brownhill's 72nd-minute goal and Crystal Palace left it late to see off fourth-tier Grimsby 1-0.
Meanwhile second division Derby, managed by former England midfielder Frank Lampard, came from 2-0 down to draw 2-2 with Premier League strugglers Southampton.
Newcastle were also held to a draw, a Matt Ritchie penalty five minutes from time ensuring a 1-1 result against Championship club Blackburn.
But Arsenal, the record 13-times FA Cup winners, won 3-0 at Blackpool.
Both Morata and Fabregas have been linked with moves away from Stamford Bridge in the January transfer window -- the latter is reportedly set to join a Monaco side managed by former Arsenal team-mate Thierry Henry.
Captain for the day Fabregas saw his poor 30th-minute penalty saved by Luke Steele but two goals in the space of 10 minutes in the second half from the previously misfiring Morata, settled the tie. 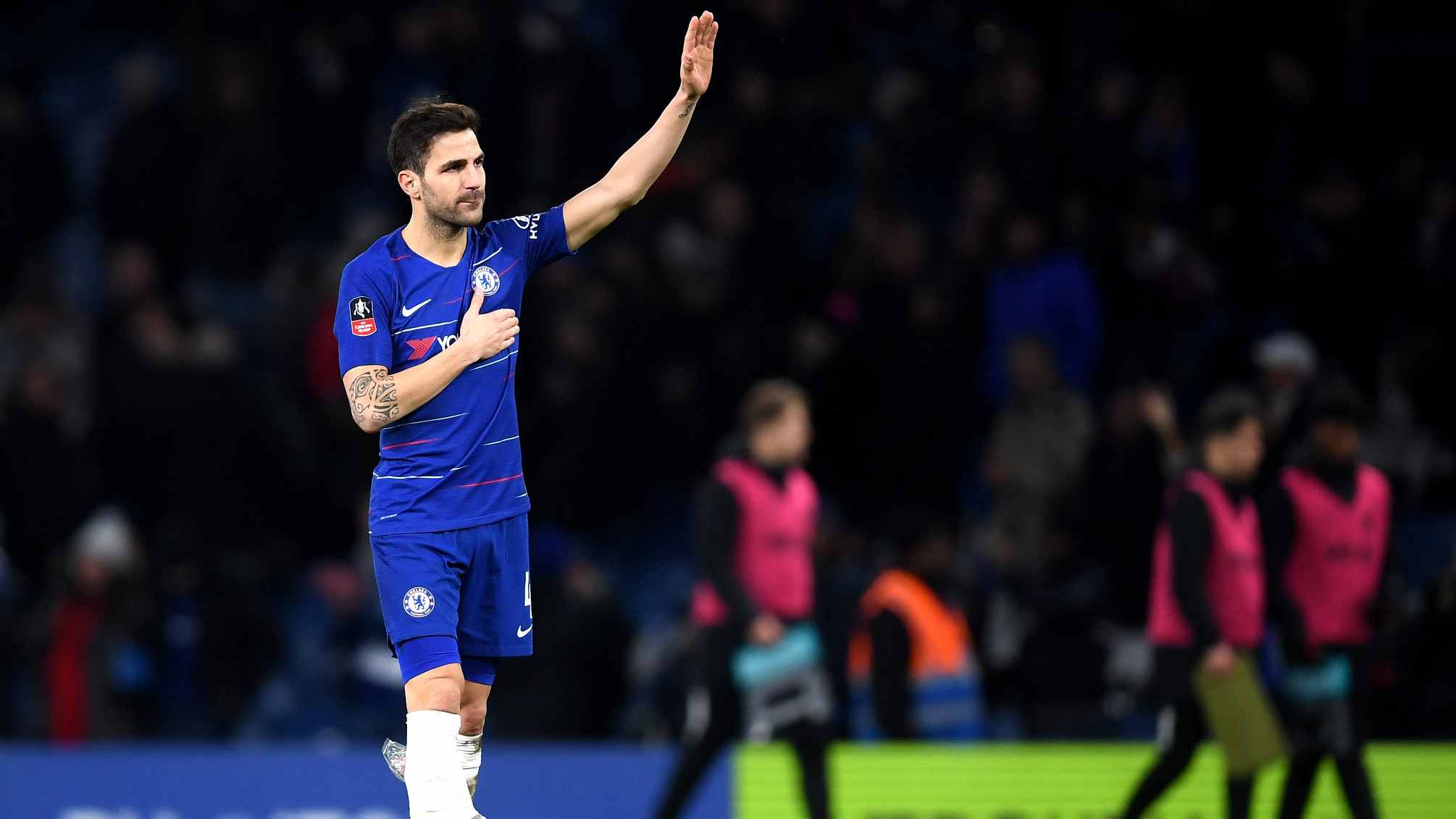 Cesc Fabregas acknowledges the fans after the FA Cup Third Round match between Chelsea and Nottingham Forest at Stamford Bridge on January 5. /VCG Photo

Cesc Fabregas acknowledges the fans after the FA Cup Third Round match between Chelsea and Nottingham Forest at Stamford Bridge on January 5. /VCG Photo

Chelsea coach Carlo Cudicini, taking press questions instead of manager Mauricio Sarri, was uncertain when asked if Fabregas had played his last game for the Blues.
"I personally don't know," he said.
"He (Fabregas) has been fantastic for the teams he played for before us and the contribution he has given to this club and to this team has been amazing. Cesc is a top, top player."
Cardiff conceded eight minutes from time when midfielder Elliott List scored for south-east club Gillingham.
"We wouldn't have scored in a million years," admitted Neil Warnock, the Cardiff manager.
Delighted Gills boss Steve Lowell, born in Swansea – Cardiff's arch Welsh rivals – added: "I haven't played against many Premiership teams before so it's got to be the best, hasn't it? It's a great result."
Southampton were cruising following Nathan Redmond goals early in each half but Derby hit back with two in quick succession after the hour mark through Jack Marriott and Tom Lawrence.
Everton eventually saw off fourth-tier Lincoln 2-1 at Goodison Park as Ademola Lookman and Bernard put the Toffees 2-0 up by the 14th minute but the hosts pulled a goal back in the 28th minute with Michael Bostwick's effort. 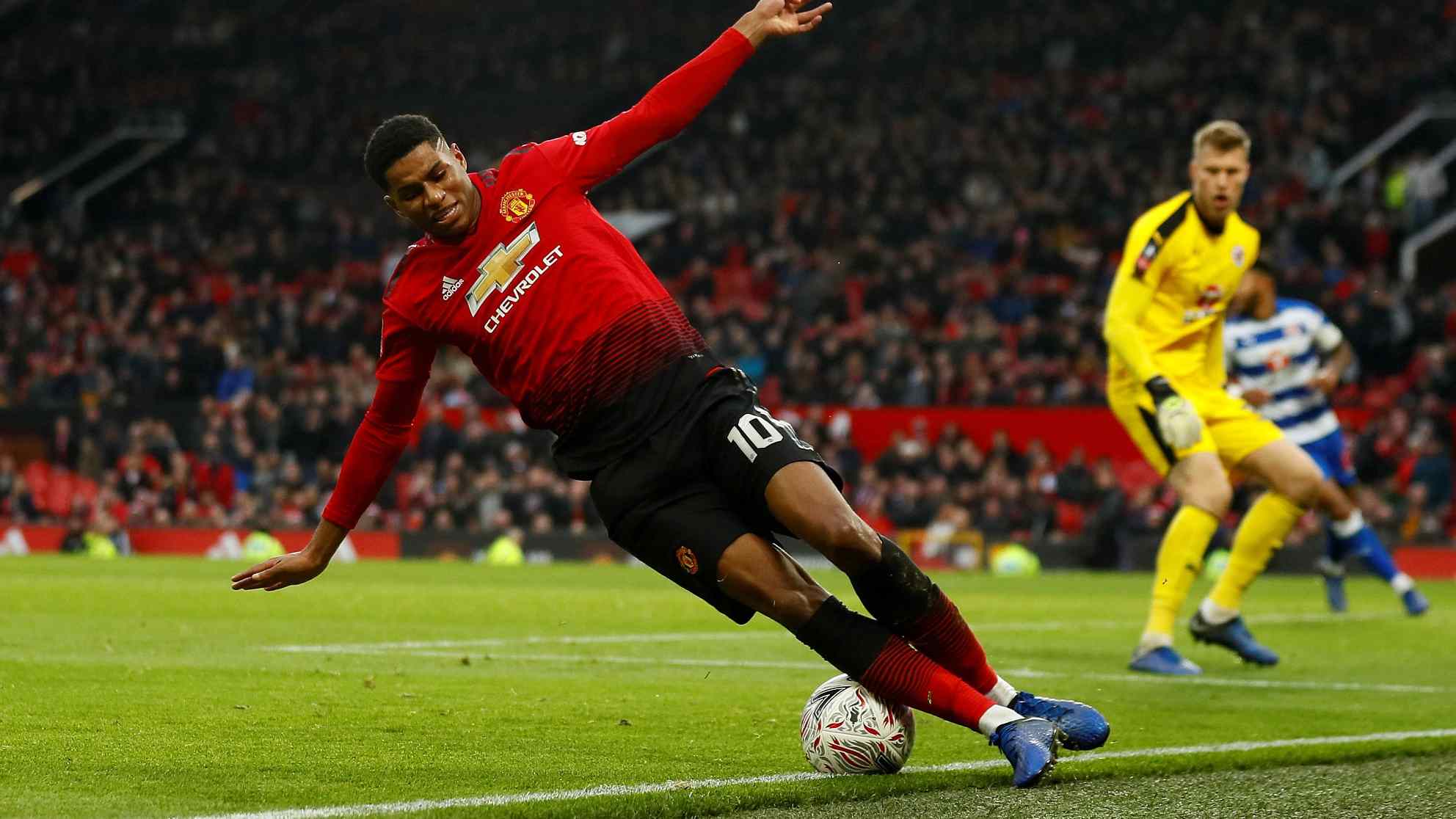 Ole Gunnar Solskjaer enjoyed a fifth successive win since becoming interim manager of Manchester United following the dismissal of Jose Mourinho with a 2-0 win over Reading.
United, last season's losing finalists, scored twice before half-time, through Juan Mata and Romelu Lukaku.
Marko Arnautovic helped West Ham beat Championship club Birmingham 2-0 scoring in the second minute but was substituted after 19 minutes by manager Manuel Pellegrini.
"He felt a pain in his back at the beginning," said Pellegrini. "He wanted to continue after that, but it was not good to take a risk."
Andy Carroll, the man who replaced Arnautovic, made it 2-0 in the 90th minute with his first goal since April.
Elsewhere, an all-Premier League clash saw Brighton win 3-1 away to south coast rivals Bournemouth.
Premier League strugglers Burnley needed a late penalty from Chris Wood to see off third-tier Barnsley 1-0. 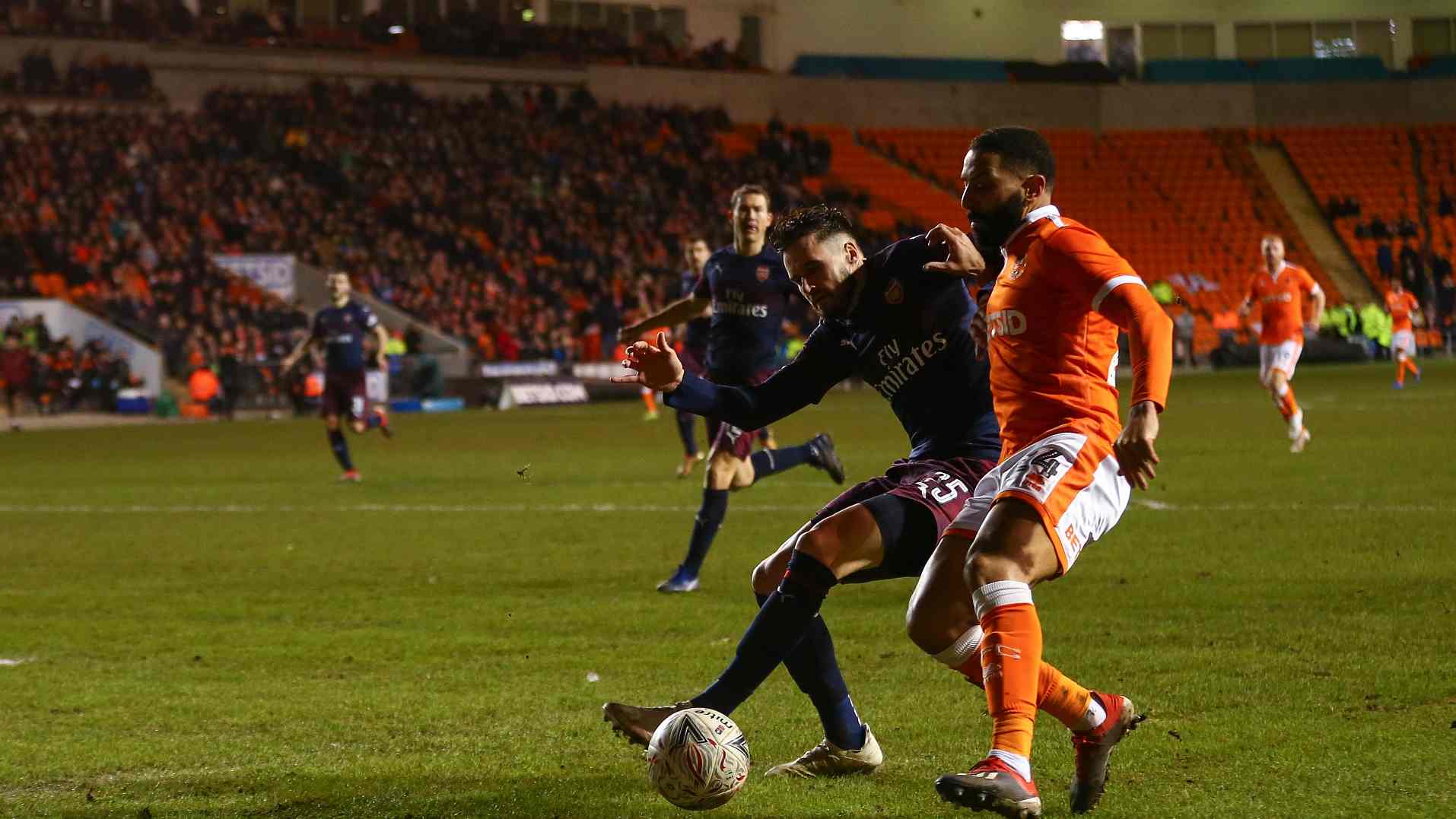 Carl Jenkinson of Arsenal vies with Liam Feeney of Blackpool during their FA Cup clash at Bloomfield Road on January 5. /VCG Photo

Carl Jenkinson of Arsenal vies with Liam Feeney of Blackpool during their FA Cup clash at Bloomfield Road on January 5. /VCG Photo

Arsenal had a bizarre build-up to their tie when a Blackpool fan climbed onto the roof of the coach taking the squad to Bloomfield Road.
Eventually, after being spoken to by police officers, the man came down off the roof after some 40 minutes before he was arrested.
Joel Willock, one of four teenagers in Arsenal's side, scored twice before half-time, with Alex Iwobi added a third goal late on.
"We imposed our quality on the game and it was good to see the young players do well today as well," said Arsenal manager Unai Emery after his FA Cup debut.
League One leaders Portsmouth, the 2008 FA Cup winners, needed an Andre Green stoppage-time goal in a 1-0 victory away to Championship high-flyers Norwich, down to 10 men after Grant Haley's early red card.
Liverpool, the Premier League leaders, play Wolves at Anfield on Monday.
Tottenham Hotspur became the first club into the fourth round this season with a 7-0 rout of fourth-tier Tranmere on Friday.
Source(s): AFP