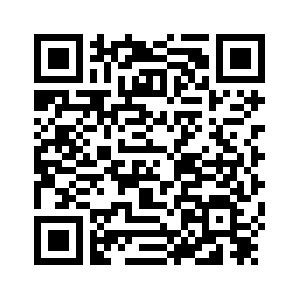 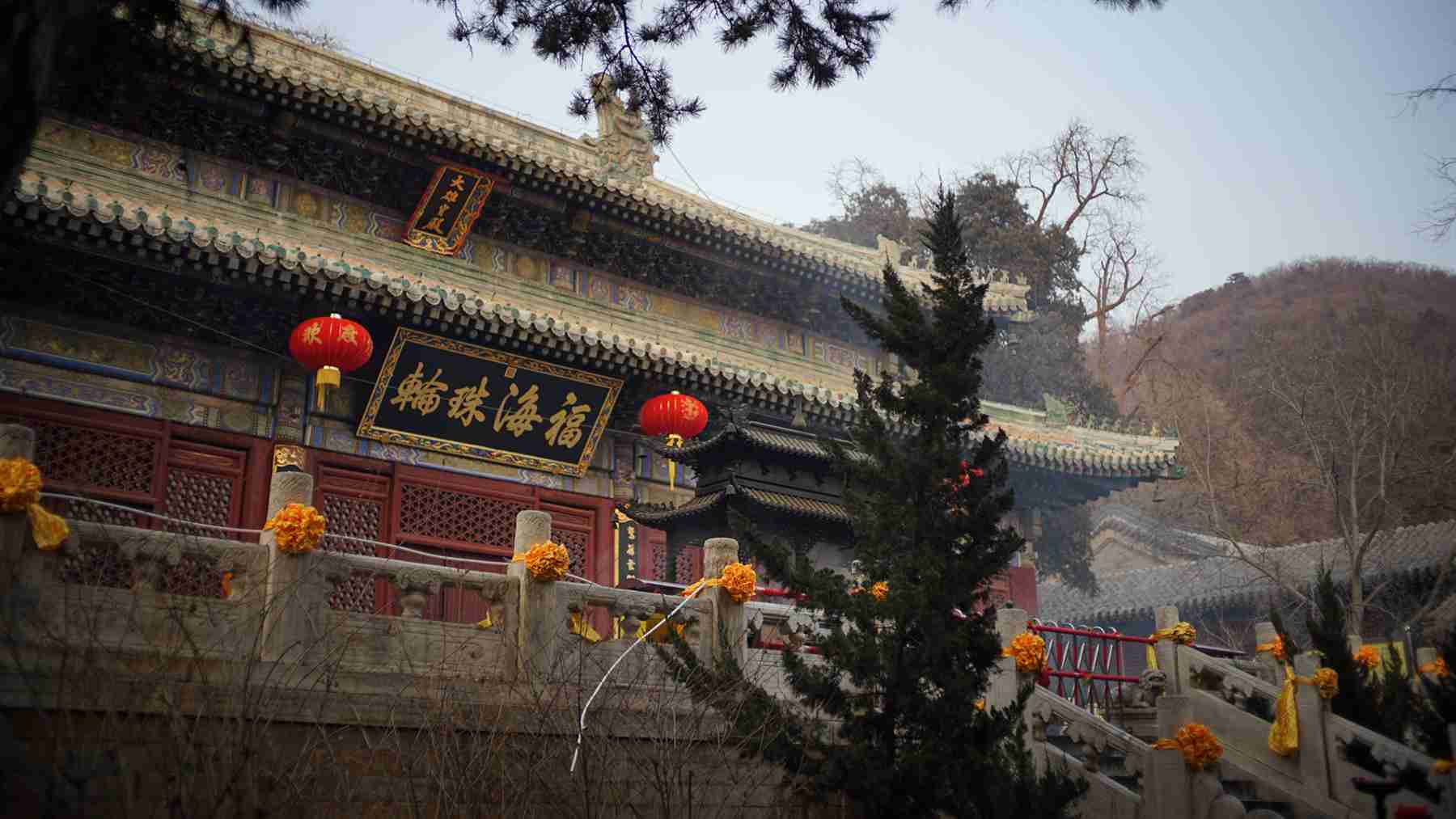 As the old saying goes "there comes first the Tanzhe Temple, then Beijing city." 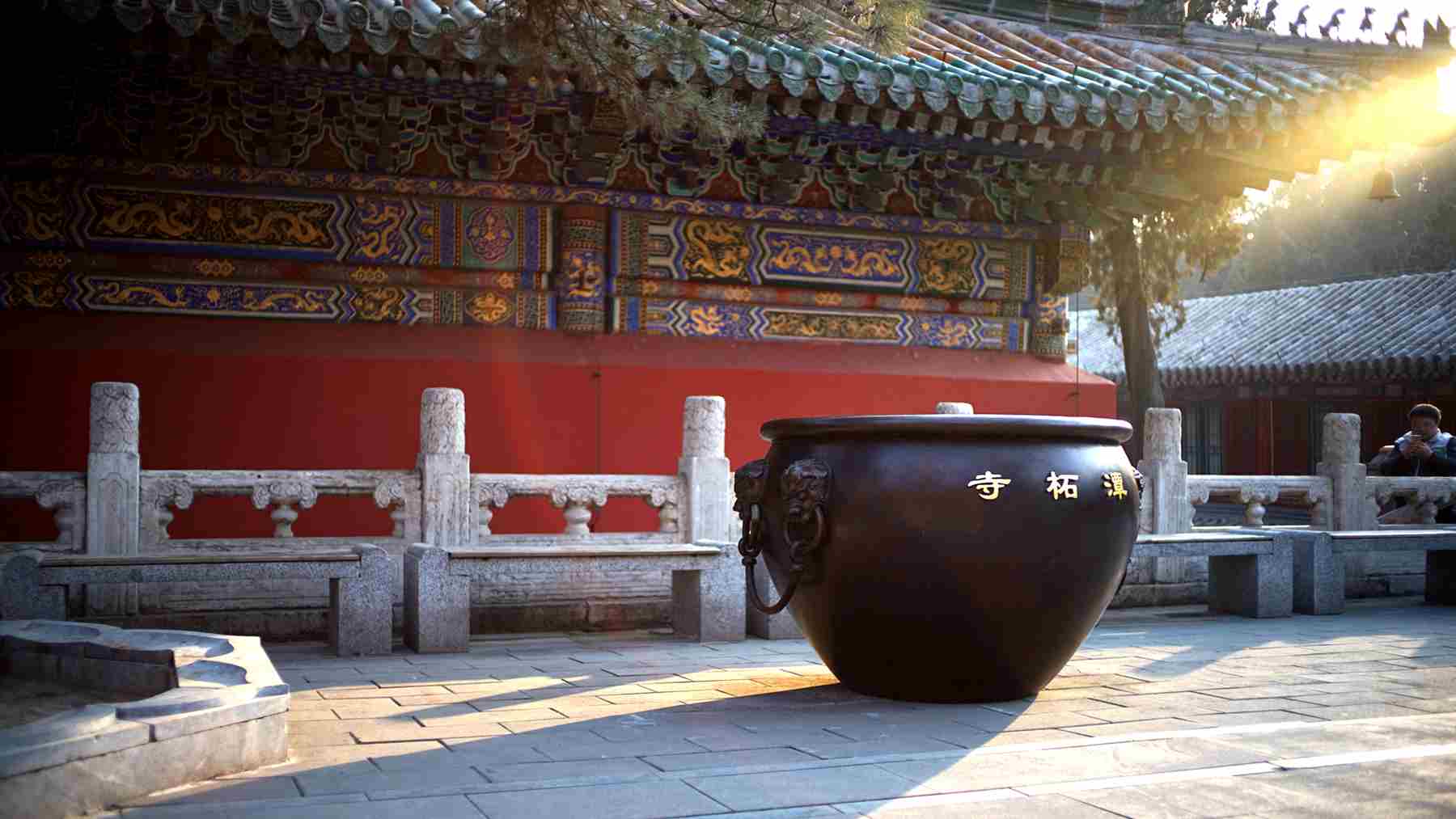 A copper pot in the courtyard of Tanzhe Temple. /CGTN Photo

A copper pot in the courtyard of Tanzhe Temple. /CGTN Photo

As the largest of all Beijing's temples and one of the oldest, Tanzhe Temple enjoys a history stretching back 1,700 years to the Jin Dynasty (265-420). The area of the entire temple is 100 mu (6.8 hectares), and its arrangement of halls is akin to that found in the Ming and Qing dynasties. 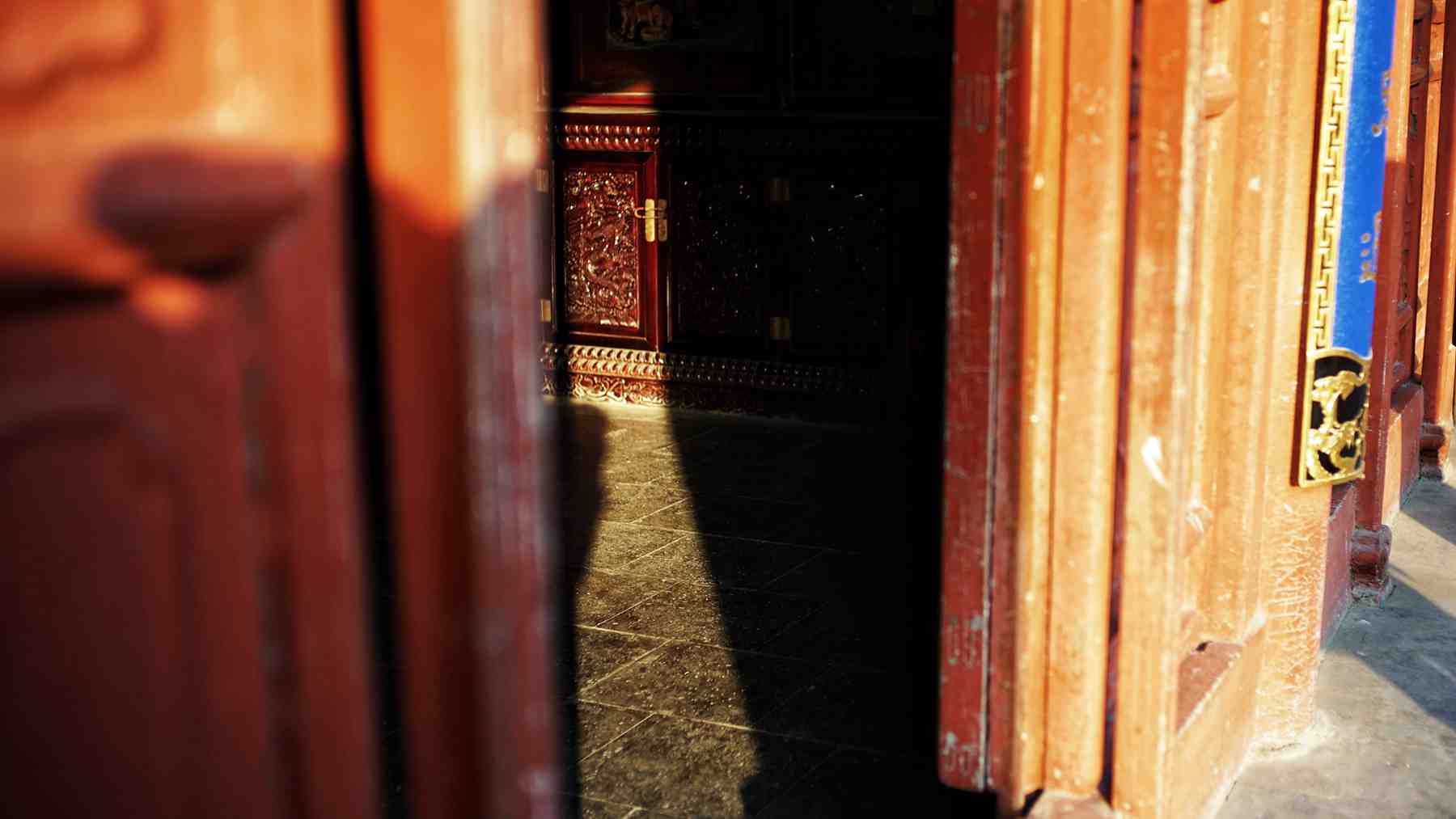 We once mentioned Tianzhe Temple as one of Beijing's best worship sites. During the weekend, I spent a wonderful afternoon in this historic scenic spot and brought back some travel tips.
I drove there in the afternoon around 2 o'clock and parked in front of the south gate, which is the main gate. Surrounded with forests, Tanzhe Temple attractively sits at the foot of the West Mountain, Mentougou District, about 40 kilometers (25 miles) from central Beijing. Tanzhe Temple runs along three axes – central, east and west. 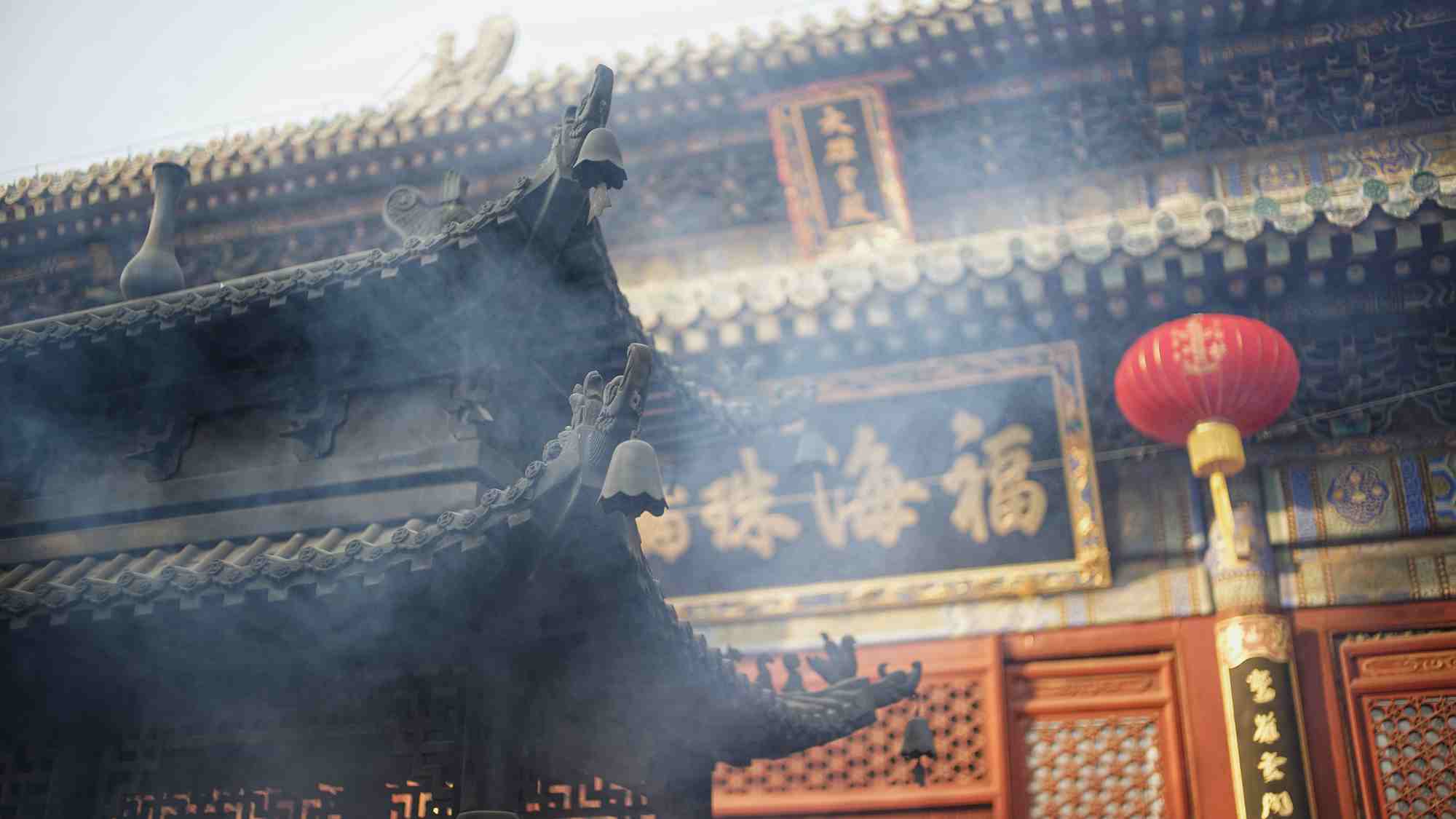 I chose the central axis on my way up since the temple is clinging upon the mountain. The main hall is called Mahavira Hall, meaning the Hall of the Great Hero, where the Buddhist monks regularly perform religious ceremonies. 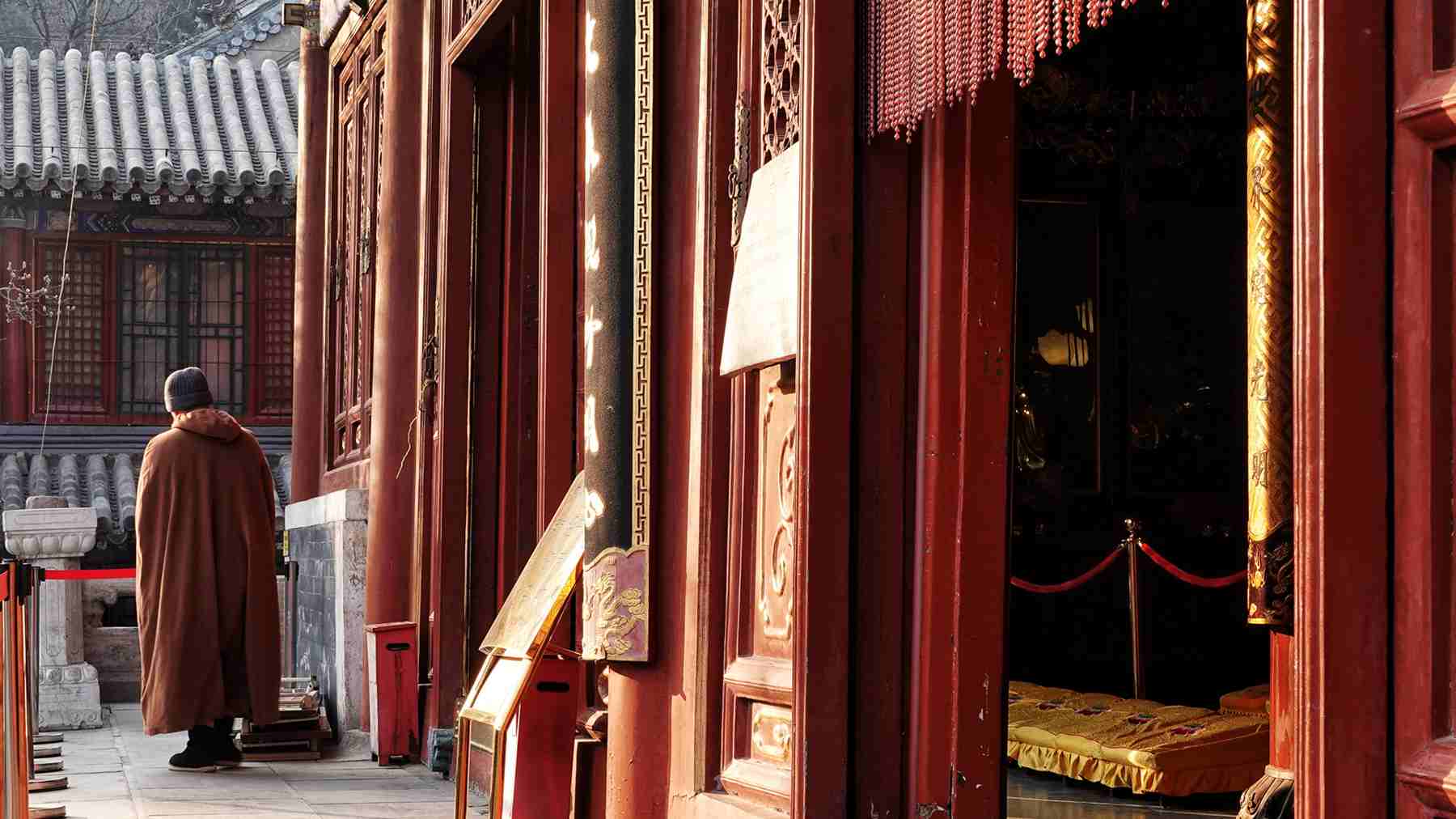 A monk stands outside a temple hall. /Photo by Wang Hui

A monk stands outside a temple hall. /Photo by Wang Hui

The Mahavira Hall has double-eave hip roofs covered with yellow glazed tiles, which symbolize a high level of Chinese architecture. What's more, there are 8 mythical animals on the double-tiered roof, only one less than the Forbidden City, also symbolizing the superiority of the temple since the mythical animals are children of the dragon in Chinese legends. Thus, the more animals on the roof, the superior the architecture is. 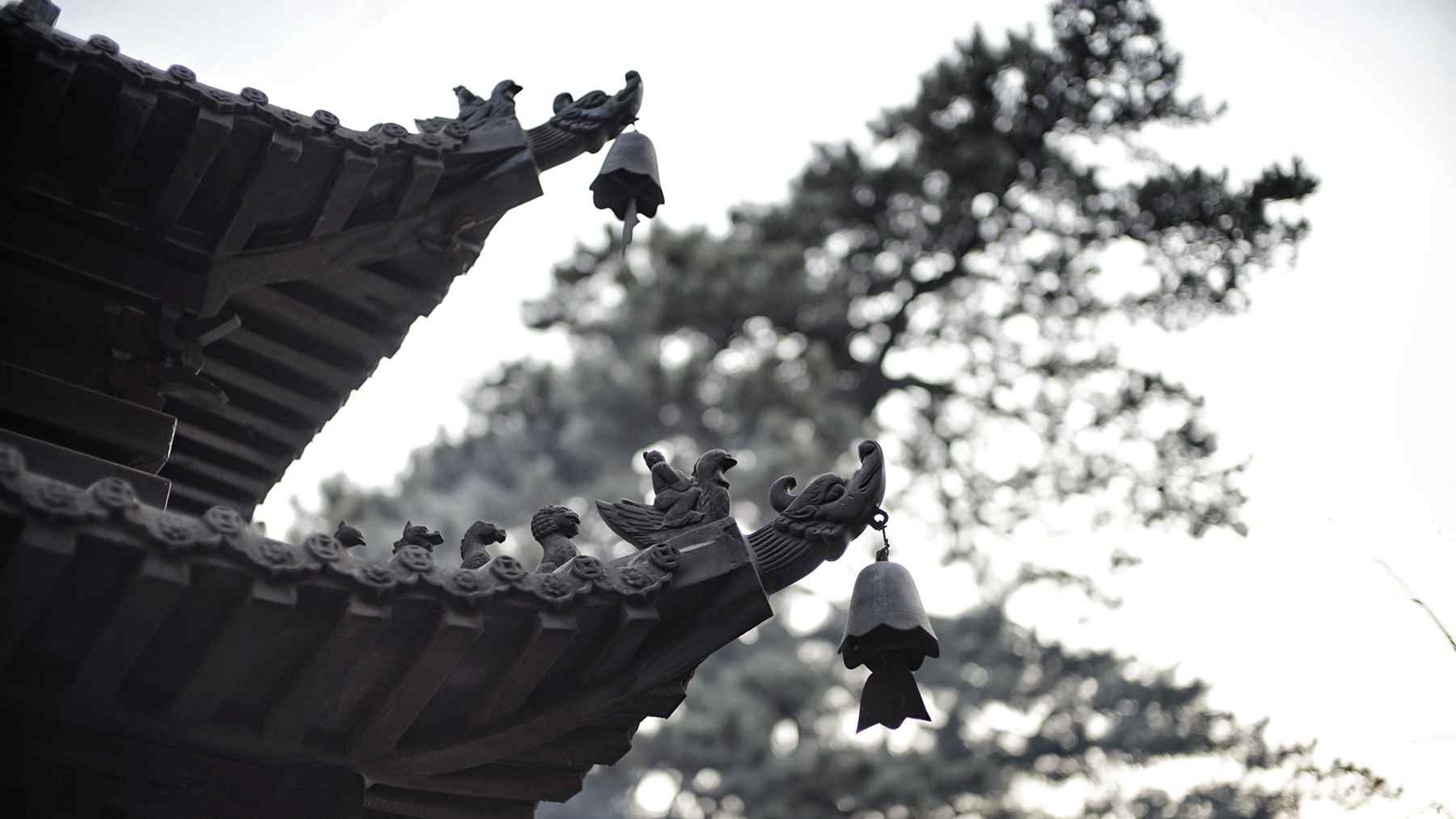 Mythical animals on the roof in Tanzhe Temple. /CGTN Photo

Mythical animals on the roof in Tanzhe Temple. /CGTN Photo

Stepping upstairs and behind the hall is a large courtyard, which should be shaded in summer by 2,000 year-old gingko trees, now with dead twigs and withered leaves. One of the gingko trees is over 40 meters high and more than 4 meters in diameter and has been dubbed the Emperor Tree. 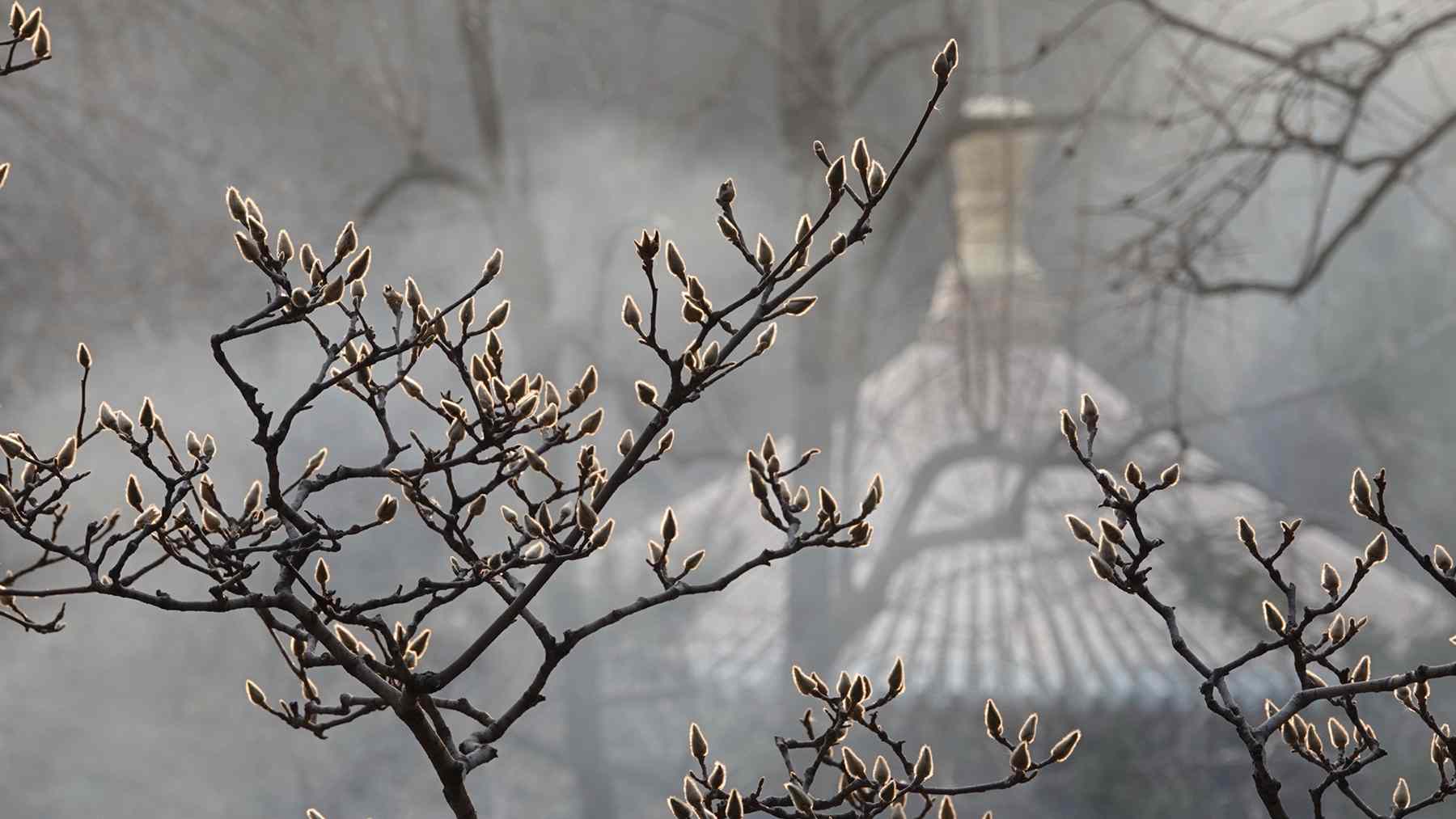 The magnolias are about to bloom. /CGTN Photo

The magnolias are about to bloom. /CGTN Photo

Besides the gingko trees, the temple's ascending, terraced grounds are overlooked by towering cypresses and pines, many of which are so old that their gangly limbs have to be supported by metal props. Visits around late March to early April are highly recommended, as the magnolias are in full bloom. Autumn is another good seasonal choice since the gingko leaves are turning yellow and you wouldn't want to miss the dreamy scenery of a golden world. 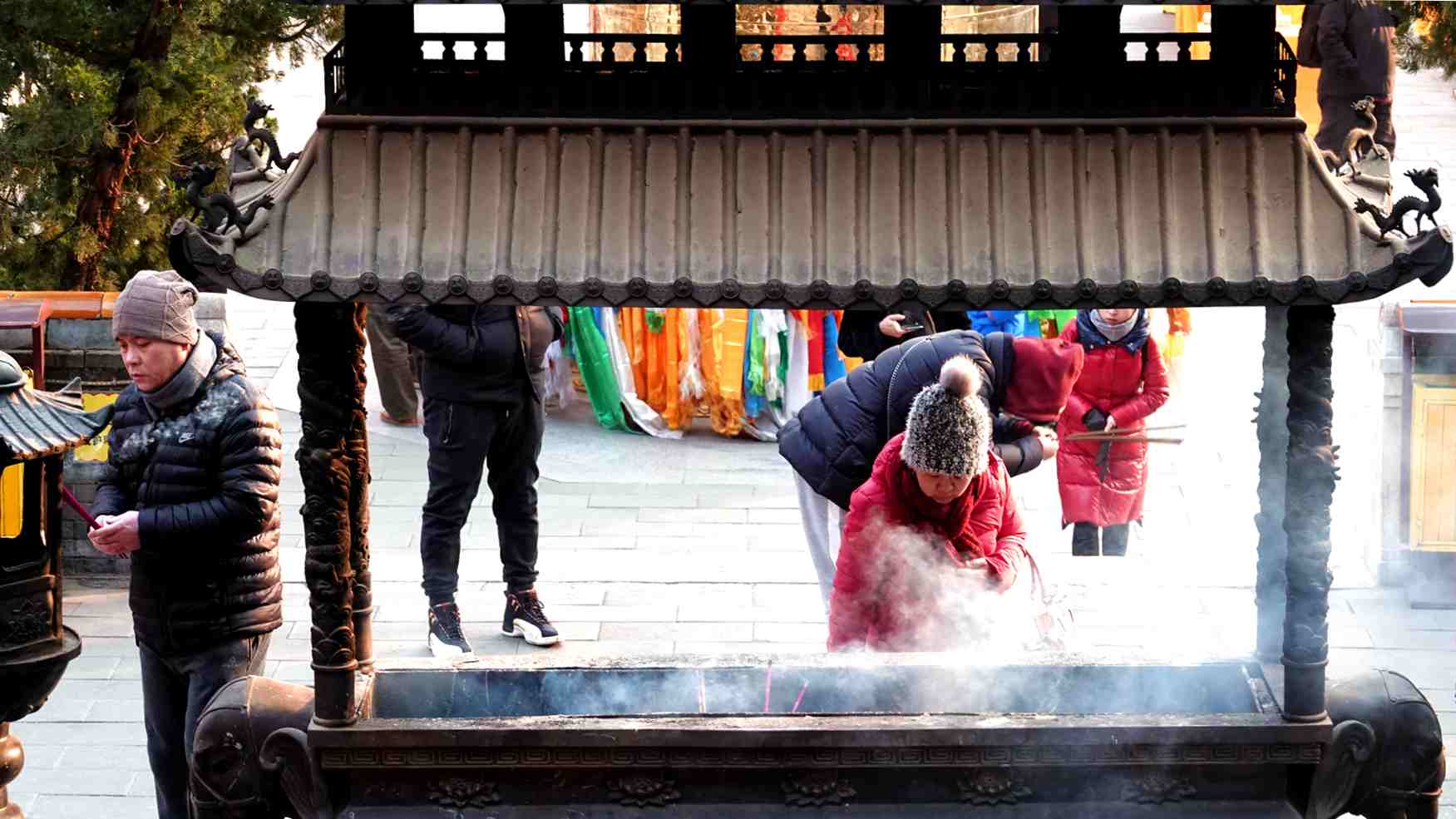 People worshiping in front of the burner. /Photo by Wang Hui

People worshiping in front of the burner. /Photo by Wang Hui

At the end of the central axis, the Guanyin Pavilion is located at the back of the courtyard and the temple's highest point, which has a great view looking down upon the mountain. A big incense burner is in front of it, where people are shrouded in incense and worship. 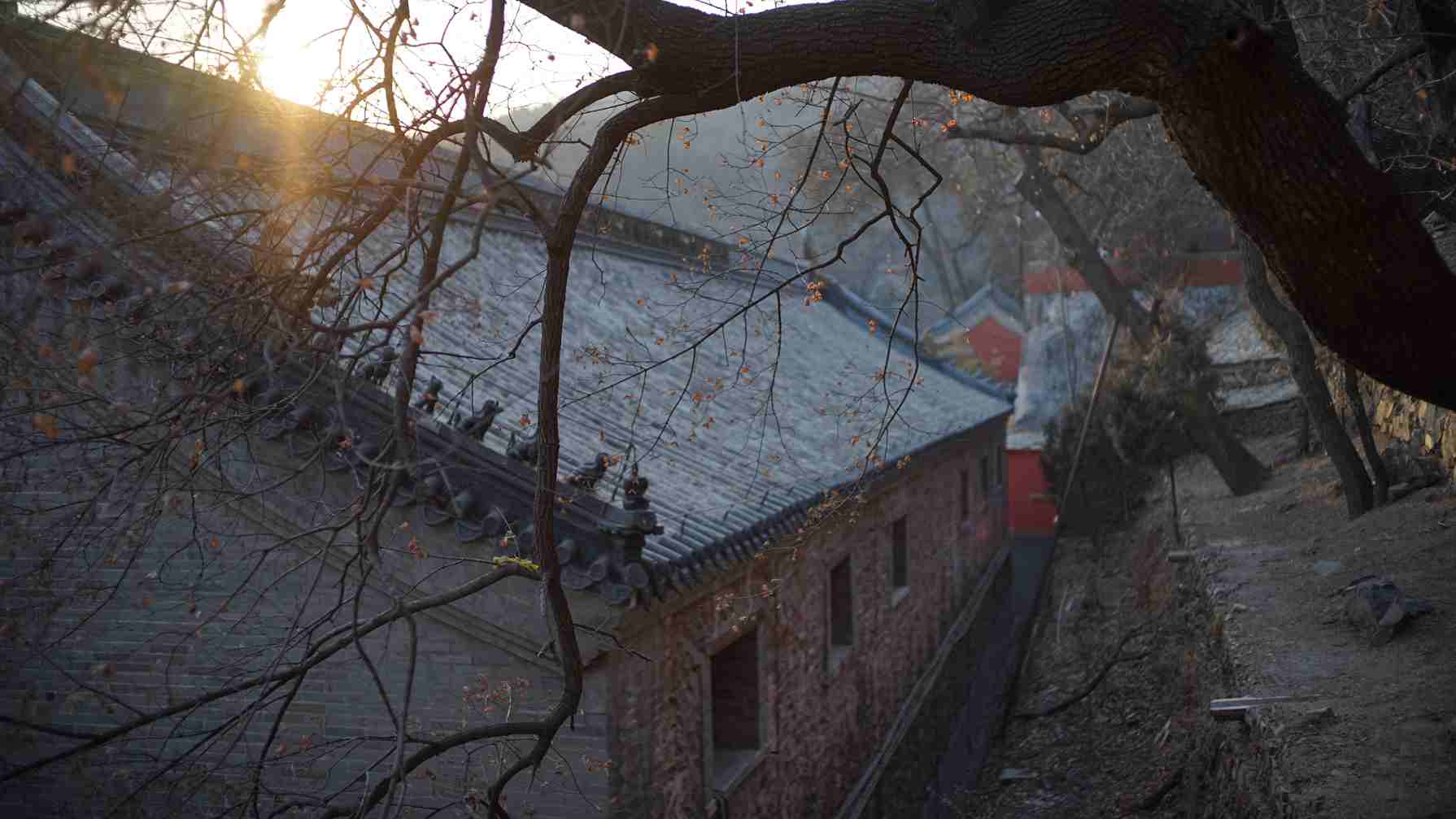 The back of the courtyard of Tanzhe Temple. /CGTN Photo

The back of the courtyard of Tanzhe Temple. /CGTN Photo

It takes more than a few steps to get to the top but you will be rewarded with an amazing view. I went down the temple by the western axis, which includes two attractive octagonal altars, one of which is called Lengyantan. After several years of construction, this altar is finally revered. 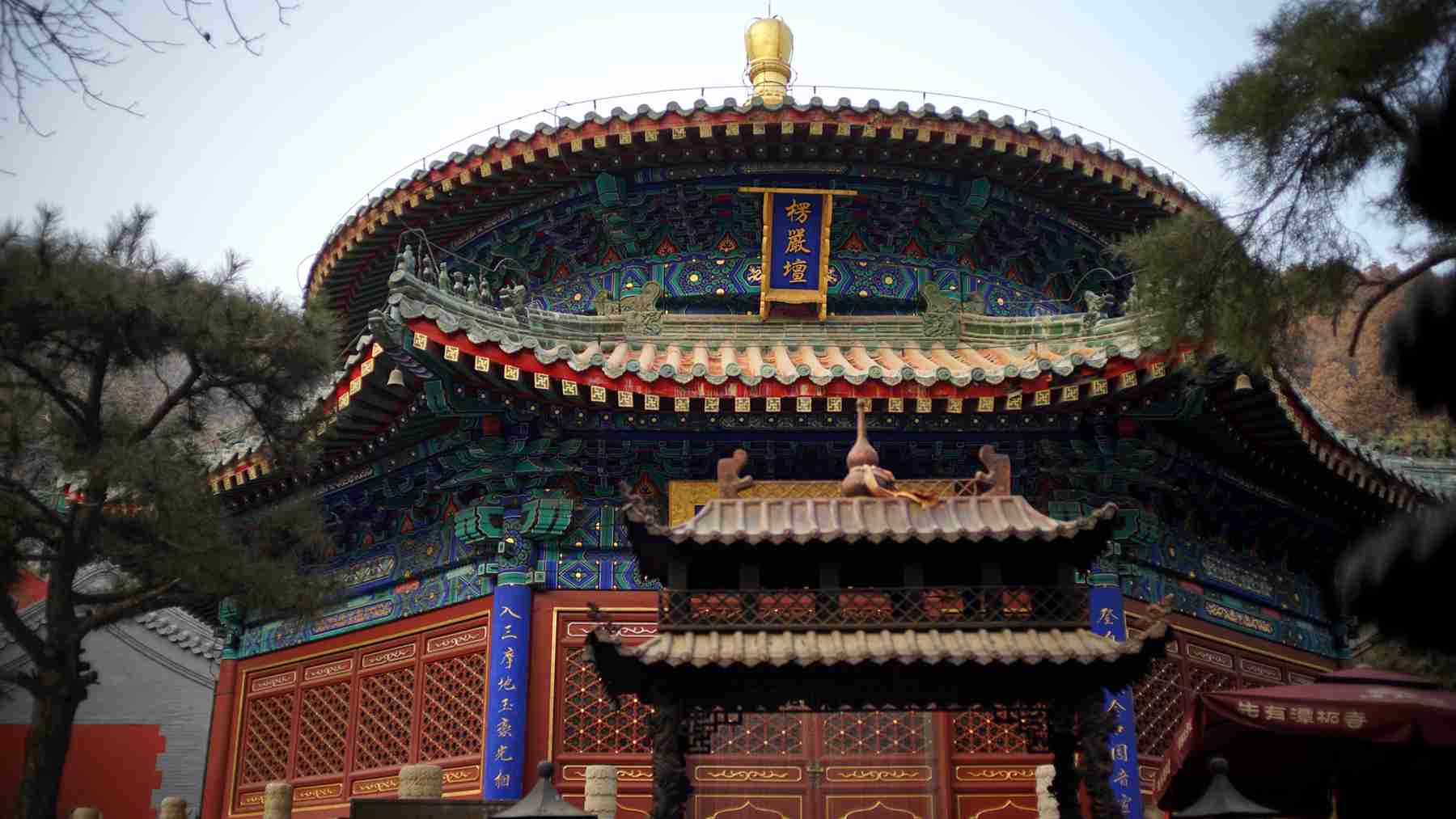 According to the article Sites, Saints, and Sights at the Tanzhe Monastery, 100 Tibetan Buddhist images were donated to Temple during the Qing Dynasty and were placed in Lengyantan but we still don't know when the images will be exhibited to the public. 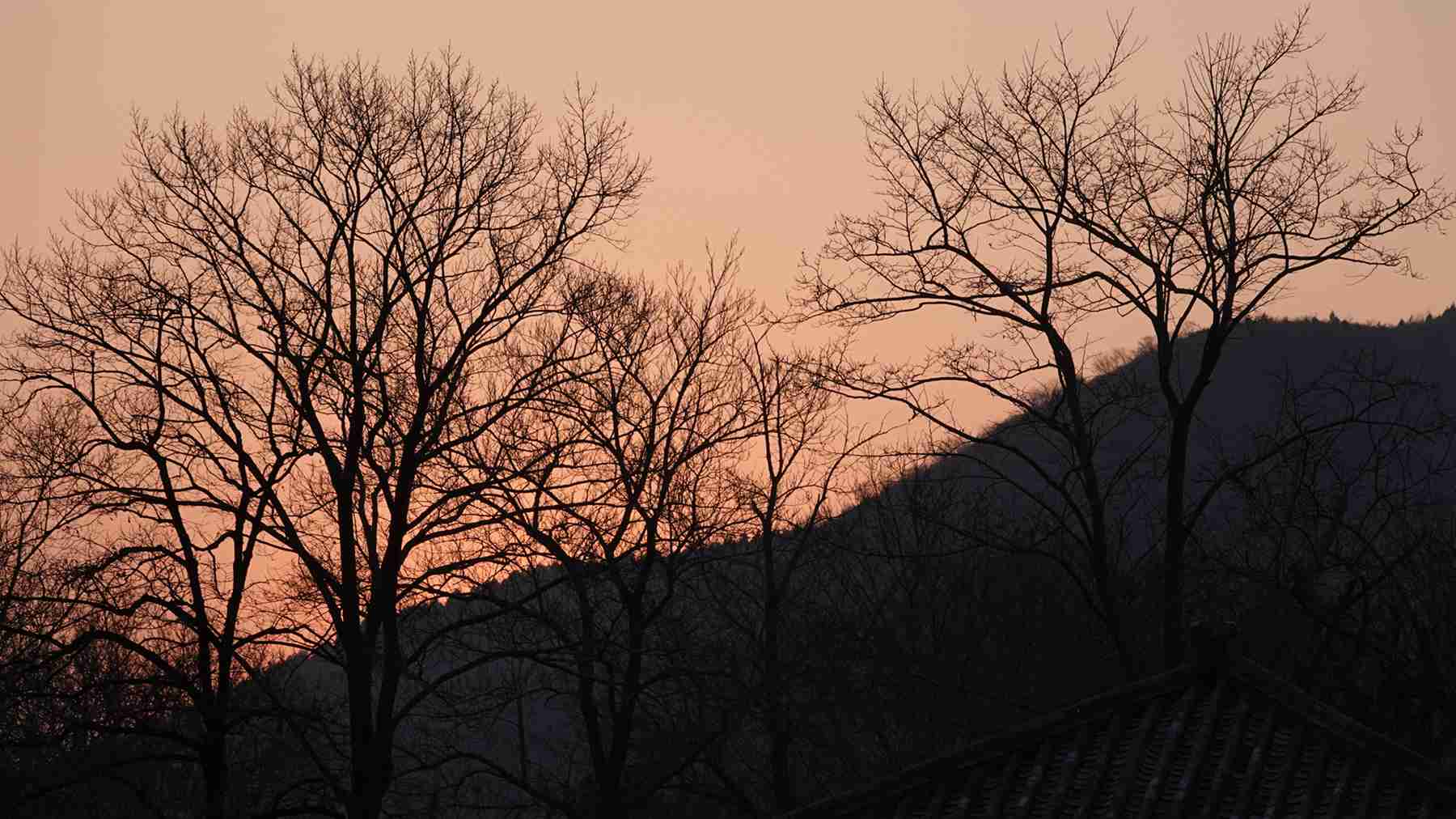 The West Mountain of Beijing under a pink sky. /Photo by Wang Hui

The West Mountain of Beijing under a pink sky. /Photo by Wang Hui

With the sunset turning the sky into lovely coral pink, I finished my trip. It is a center for worship as people look towards the future, yet is inextricably linked to its long history in the past. It is always a good experience to let the old temples talk to you about the old-time stories. If you have a plan to explore the outskirts of Beijing, Tanzhe Temple is the perfect place to go.
Opening time:
Apr. - Oct.: 8:00--17:00
Nov. - Mar.: 8:00--16:30
How to get there:
Take subway line One and get off at Pingguoyuan Station, then connect bus 931 to Tanzhe Temple, and it takes about a one-hour ride.
Drive along National Highway G108 and exit when you see the billboard pointing to Tanzhe Temple. It is quite difficult to find a parking lot during the peak season.
Ticket Price:
55  yuan per adult
Free for children under 1.1m height