The lingering charm of Chinese calligraphy
By Ye Qing 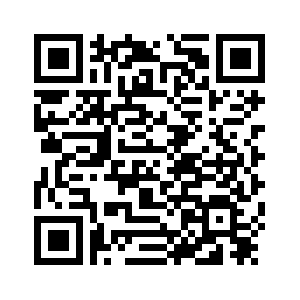 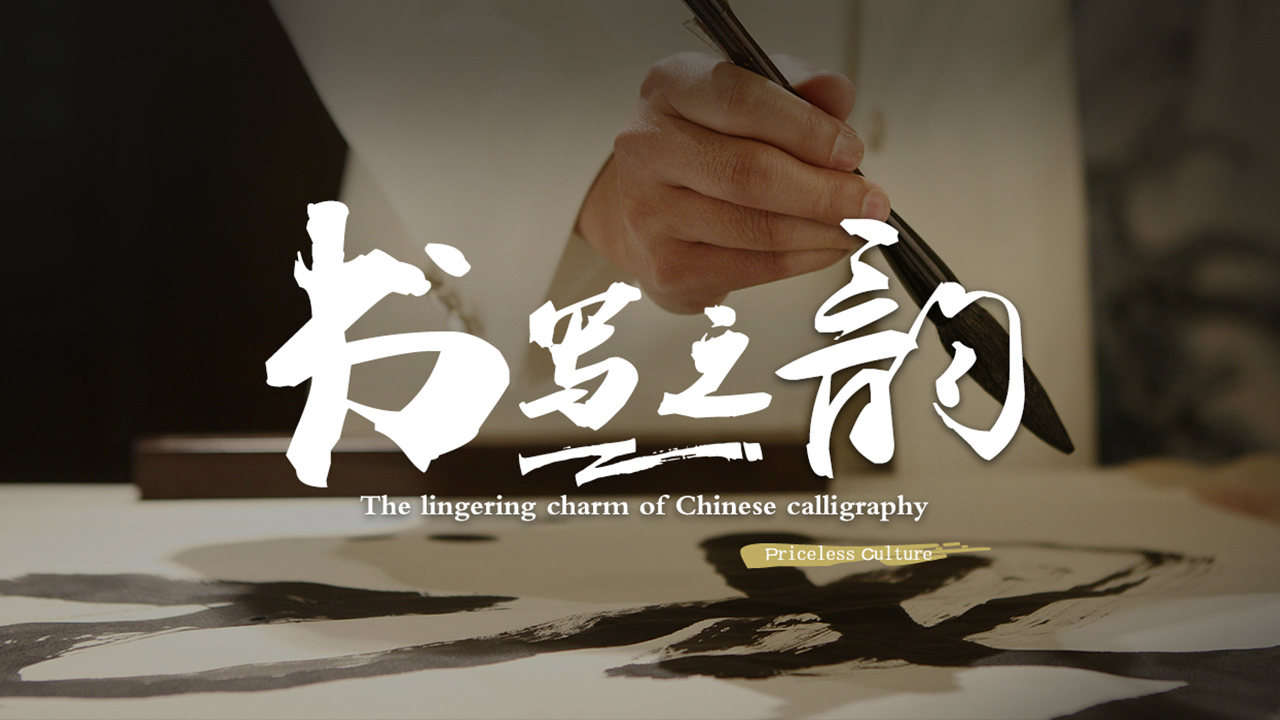 Calligraphy was the visual art form in traditional China.
Since the invention of the "Oracle bone script," Chinese calligraphy has experienced several development stages, from "Seal script" to "Clerical script," "Cursive script," "Regular script" and "Running script." There are a large number of calligraphers and calligraphic works that were produced and helped constitute a profound tradition of Chinese calligraphy at each stage.
On September 30, 2009, Chinese calligraphy was added to the list of UNESCO Masterpieces of the Oral and Intangible Heritage of Humanity at the Fourth Session of the Intergovernmental Committee of UNESCO held in Abu Dhabi, the United Arab Emirates.

I. Oracle bone script
The oracle bone script, also known as "Jiaguwen" in Chinese, was used on animal bones or a turtle's plastron.
It is the earliest known form of Chinese writing. Oracle-bone inscriptions were discovered in Yinxu in Anyang City, in central Henan Province, as a cultural product of the Shang Dynasty (1600 - 1046 BC), dating back more than 3,600 years.

Moreover, there were bronze items used during the Shang and Zhou (1046-256, BC) dynasties, and some were inscribed with writing, which was later called "Bronze script," also known "Jinwen" or "Zhongdingwen" in Chinese.
The structure of the oracle bone script was the base of the bronze script and later Chinese calligraphy.
II. Seal script
Seal script, "Zhuanshu" in Chinese or "simplified picture script," was developed directly from China's most ancient forms of writing.
The general term seal script can be used to refer to several types of seal script, including the large seal script and the small seal script. 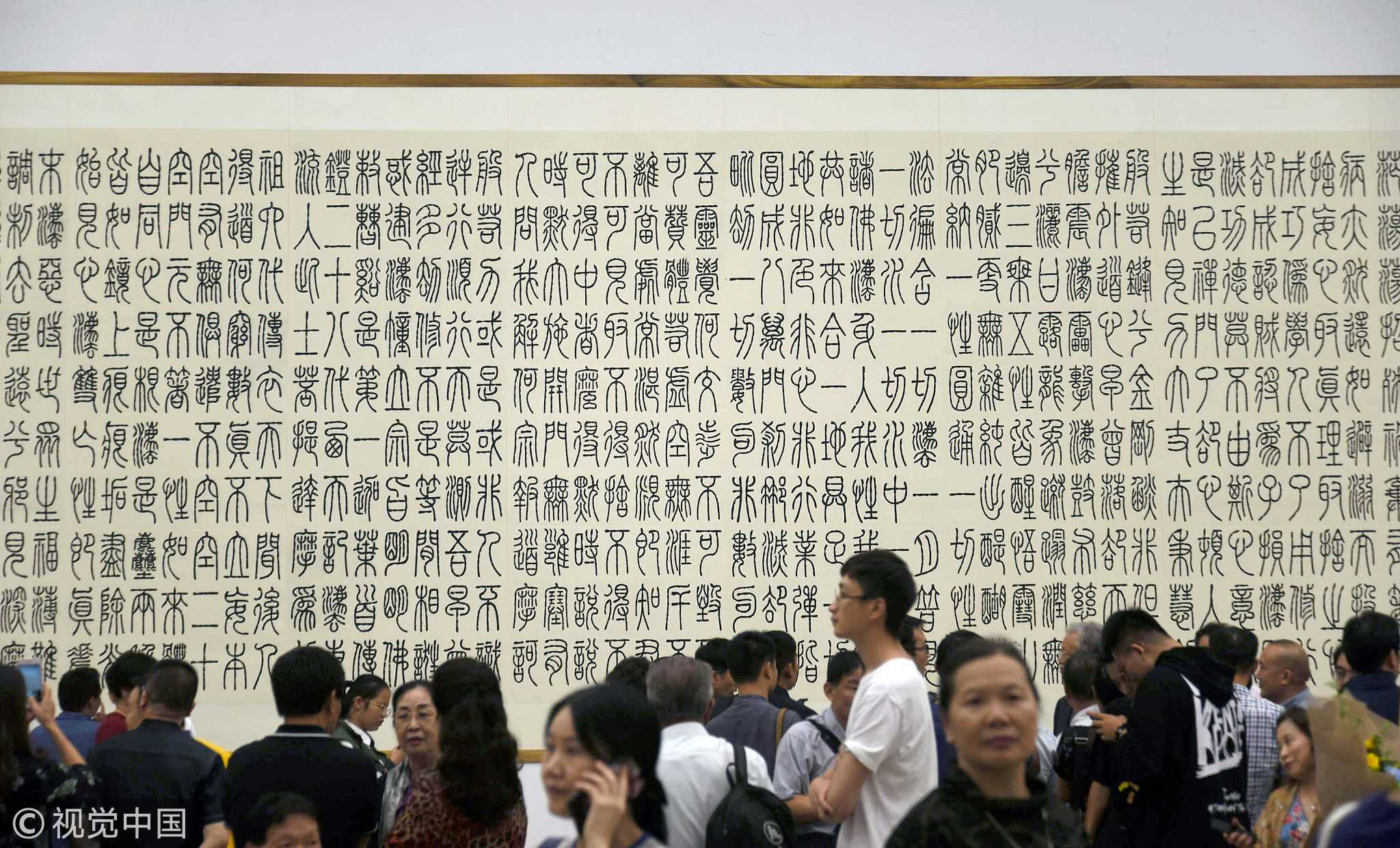 According to the documents, there was no special name for Chinese calligraphy before the Qin Dynasty (221 - 206 BC). The so-called seal script was the official calligraphy and the standard font for official documents in the Qin Dynasty.
However, since it's a difficult writing method, the script was replaced by the clerical script after Qin.
Also, it was still widely used for decorative engraving and seals, such as name chops, or signets in the Han Dynasty (206 BC - 220 AD).
III. Clerical script
The clerical script, or "Lishu" in Chinese, is an intense font style commonly seen in Chinese characters.
As ancient bamboo and wooden slips recorded, the clerical script evolved from the Warring States period (453 - 221 BC) to the Qin Dynasty and reached its peak during the Eastern Han or Later Han Dynasty (25 - 220 AD). 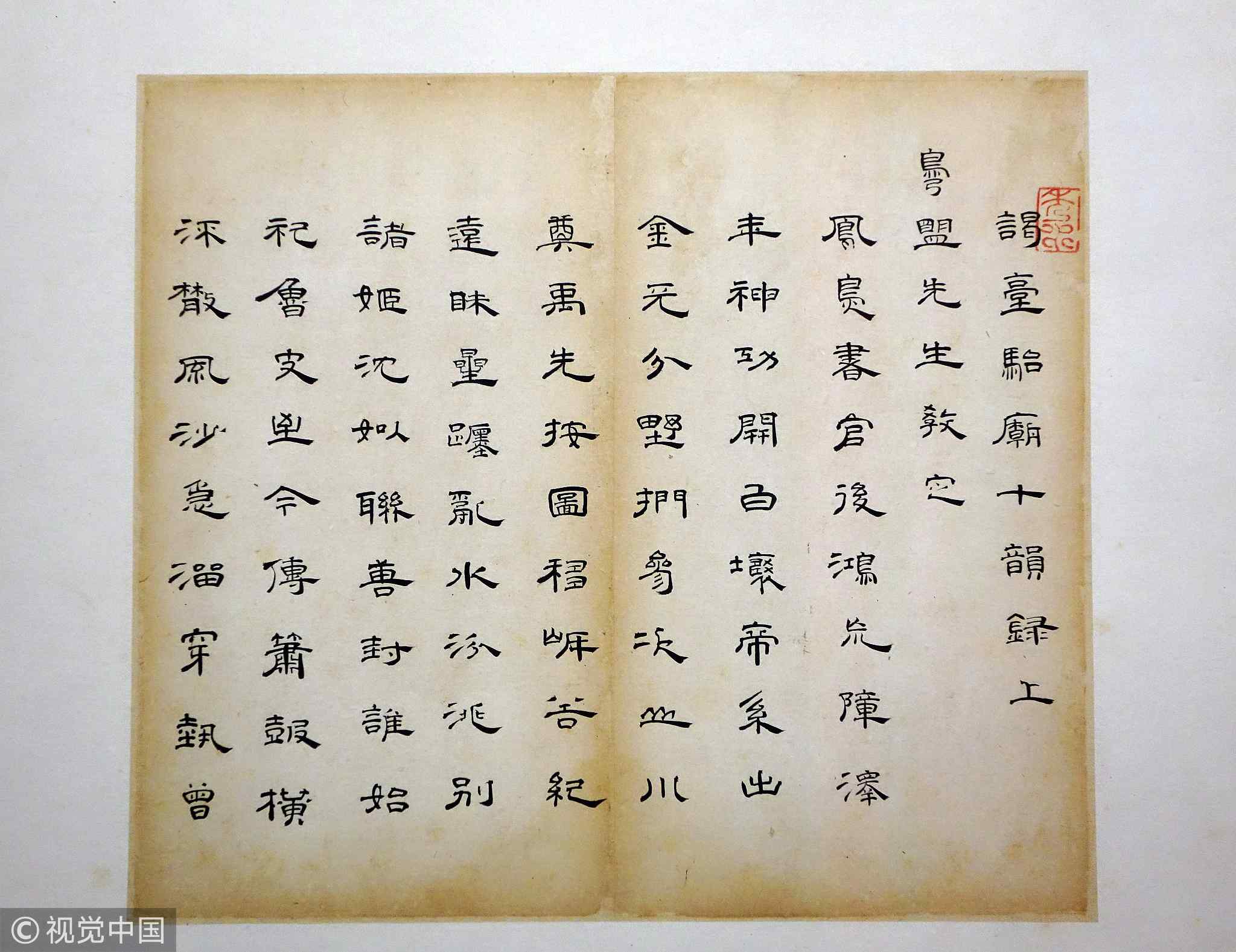 Clerical script, which was based on the seal script, is the font that is easiest to write. For the convenience of writing on the bamboo and wood slips, ancient people simplified the small seal script. The appearance of the clerical script is an excellent change in ancient writing and calligraphy.
IV. Cursive script
The cursive script, or "Caoshu" in Chinese, has a simple structure and continuous strokes, which evolved from the clerical script.
The cursive script began in the early Han Dynasty. The character "Cao" means quick, rough or sloppy, which corresponds to its simple structure and fast writing style. 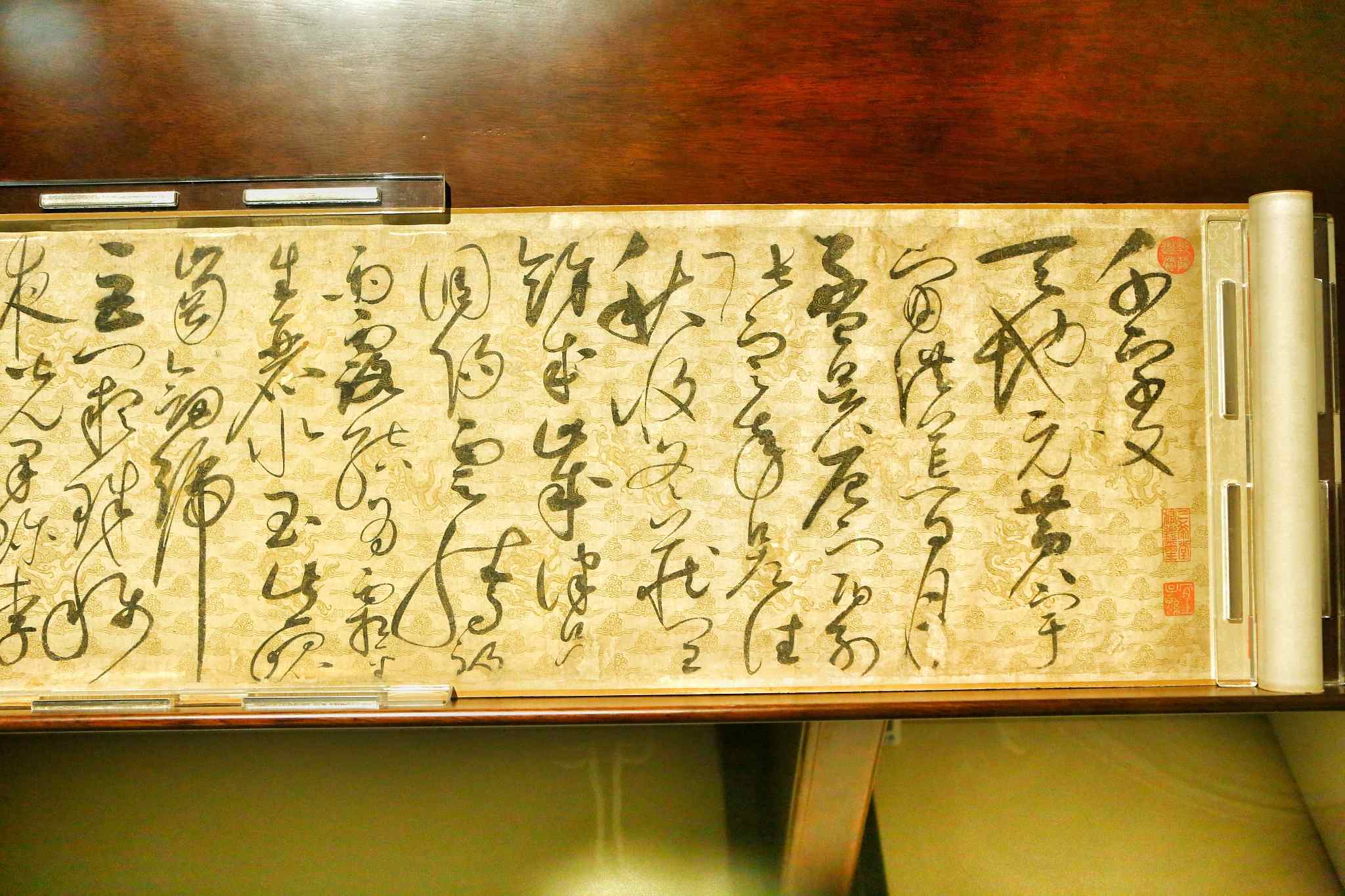 A cursive script work of Emperor Huizong of Song of China. /VCG Photo

A cursive script work of Emperor Huizong of Song of China. /VCG Photo

The early cursive script, which broke the strict rules of the clerical script, was a hasty form of writing and called "Zhangcao."
Zhangcao was most widespread in the Han and Wei Dynasties (220 - 266 AD), and was later revived in the Yuan Dynasty (1271 - 1368 AD) and transformed in the Ming Dynasty (1368 - 1644 AD).
Now, the aesthetic value of the cursive script is far beyond its practical value. The cursive script has a writing method to follow and not random scribbling.
V. Running script
The running script, "Xingshu" in Chinese or "Semi-cursive script," can be compared to Western longhand.
There are two types of cursive, including "Xingkai" and "Xingcao," which were developed on the basis of the regular script.

A running script work of Chinese painter Dong Qichang, who was a calligrapher of the later period of the Ming Dynasty (1368 - 1644 AD). /VCG Photo

A running script work of Chinese painter Dong Qichang, who was a calligrapher of the later period of the Ming Dynasty (1368 - 1644 AD). /VCG Photo

Running script is a font between regular script and cursive script, and the appearance of the script is in order to compensate for the slow writing speed of regular script and the illegibility of cursive script.
VI. Regular script
The regular script, also known "Kaishu" in Chinese, can be compared to Western printing, and is the newest of the Chinese script styles.
The script appeared during the Wei Dynasty (220 - 266 AD) and matured stylistically around the seventh century, hence it's the most common form in modern writings and publications.
The character "Kai" means "the model" in Chinese, which represents the normalized style and standard writing method of this script. 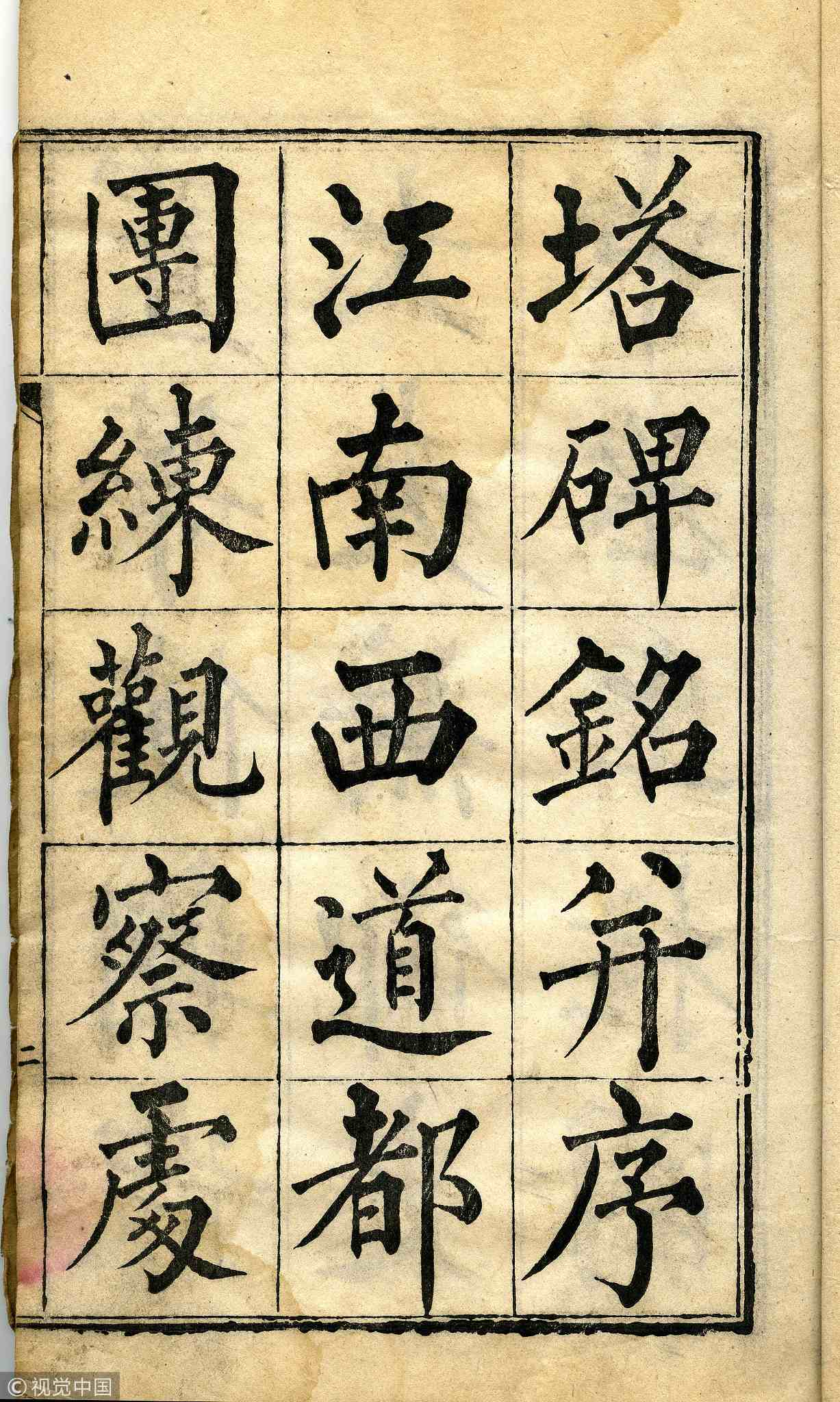 A copy from Huang Ziyuan, the original piece is Liu Gongquan's "Monument to the mysterious Tower," or "Xuan Mi Ta Bei" in Chinese. /VCG Photo

A copy from Huang Ziyuan, the original piece is Liu Gongquan's "Monument to the mysterious Tower," or "Xuan Mi Ta Bei" in Chinese. /VCG Photo

The clerical script changed the writing style and aesthetic trend of Chinese characters, thus laying a foundation for the evolution of the regular script, and opening a field for the development and prosperity of Chinese calligraphy.
In modern times, the regular script is still the standard of writing Chinese characters.
Over time, Chinese characters gradually became a system of symbols with strong national ties. For the better promotion of Chinese character culture, China established the National Museum of Chinese Writing (NMCW) in 2009, in Anyang City, Henan Province, where the oracle bone script originated. The NMCW is a state-level museum constructed upon the approval of the State Council for preserving, showcasing and studying the cultural relics.
(Video edited by Zhong Jianli, cover image by Du Chenxin)