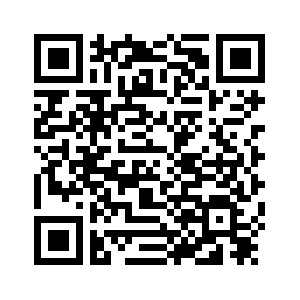 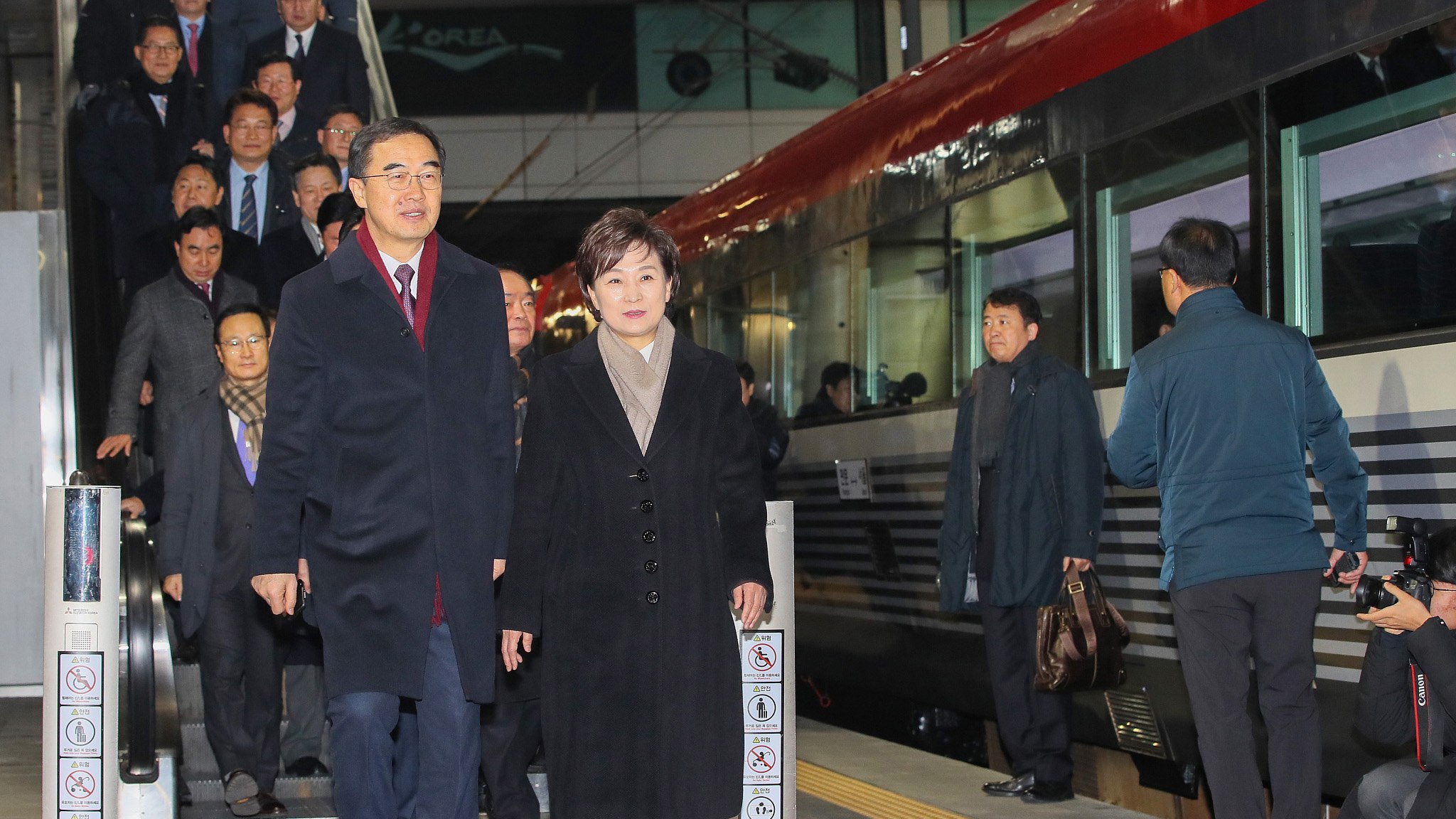 The Republic of Korea (ROK)  and the Democratic People's Republic of Korea (DPRK) held a groundbreaking ceremony on Wednesday to connect railways and roads across the inter-Korean border as scheduled, according to South Korea's unification ministry.
A special nine-car train carrying some 100 ROK nationals, including officials and five people born in the DPRK, was seen leaving Seoul railway station early in the morning for a two-hour journey to the DPRK border city of Kaesong.
The train crossed the military demarcation line (MDL), which divides the two Koreas, into the DPRK territory at 8:34 a.m. local time (23:34 GMT Tuesday).
Ri Son Gwon, chairman of the DPRK's state agency in charge of inter-Korean ties, and Vice Railway Minister Kim Yun Hyok, led the DPRK participants in the event.
The ceremony included celebratory speeches by representatives of the Koreas followed by events such as "track-linking," the signing of a railway sleeper and unveiling a signboard at the station. 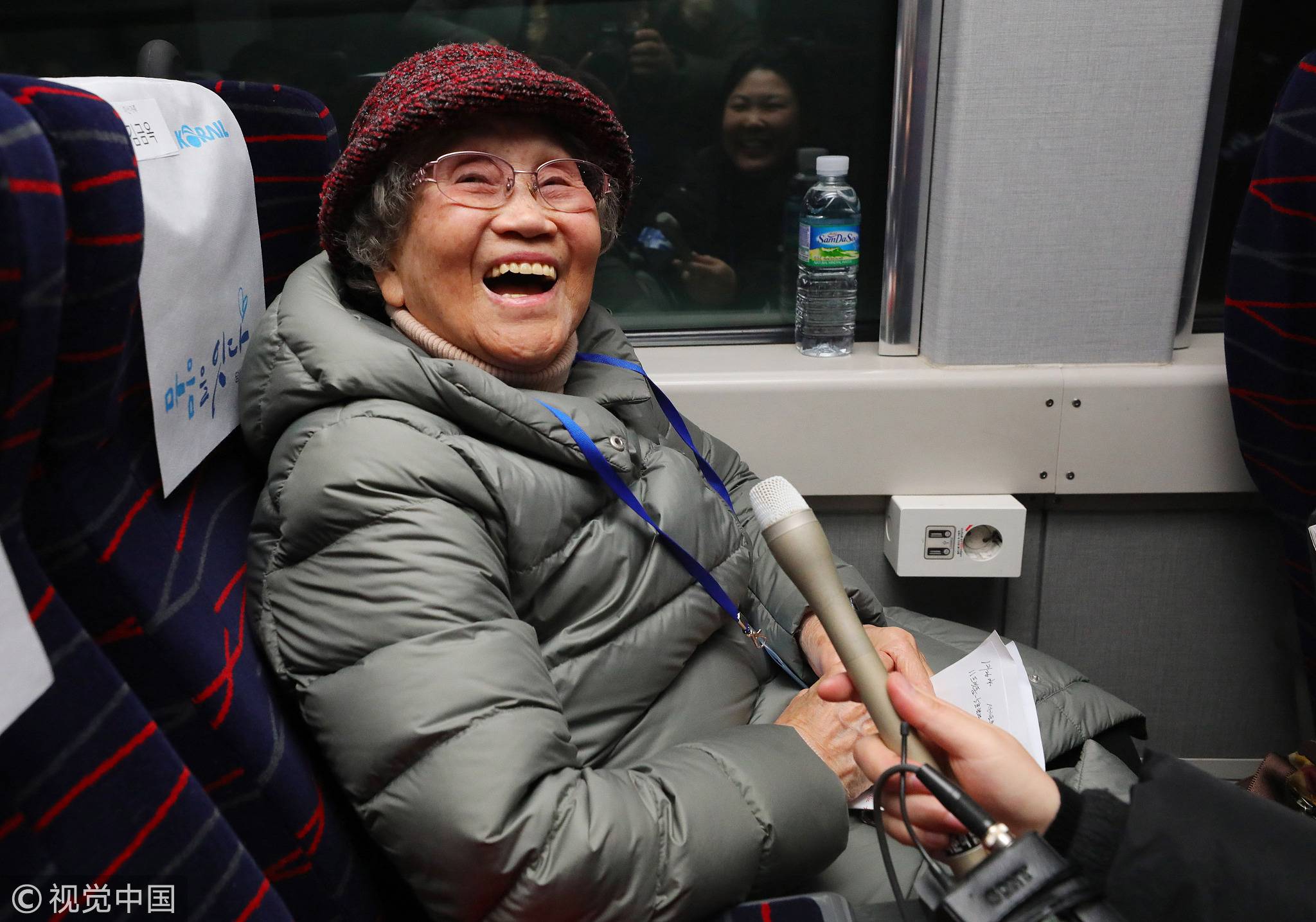 Kim Geum-ok, who was separated from her family during the 1950-53 Korean war and is one of the 100-strong South Korean delegates, is aboard a special train bound for the DPRK's border town of Kaesong, December 26, 2018. /VCG Photo

Kim Geum-ok, who was separated from her family during the 1950-53 Korean war and is one of the 100-strong South Korean delegates, is aboard a special train bound for the DPRK's border town of Kaesong, December 26, 2018. /VCG Photo

After the ceremony, the South Korean participants were scheduled to have lunch in Kaesong and returned by train to the Seoul Station at 3pm local time (0600 GMT).
Foreign dignitaries also joined the ceremony, including Armida Alisjahbana, executive secretary of the UN Economic and Social Commission for Asia and the Pacific, and senior railway and road officials from neighboring countries.
Seoul earlier received sanctions exemptions on materials and items needed to hold the event in the DPRK through close consultations with Washington.
ROK President Moon Jae-in and the DPRK leader Kim Jong Un agreed to hold the ceremony by the end of this year when they met at their third summit in Pyongyang in September.
Seoul stressed that the ceremony would not herald the start of actual work on reconnecting and modernizing road and rail links between the two Koreas – which remain technically at war after their 1950-53 conflict ended without a peace treaty.
The event is a mere "expression of a commitment" to the projects, a spokesperson for the ROK Unification Ministry said, adding that construction would depend on "progress on the DPRK's denuclearization and circumstances concerning sanctions."
The two sides wrapped up their joint railway and road inspections for the projects this month.
Trump said on Monday that he was "looking forward" to his second summit with Kim, which Washington says may take place early next year.
He tweeted the statement after he was briefed by Stephen Biegun, the US special representative on DPRK, who wrapped up a three-day trip to Seoul on Saturday. 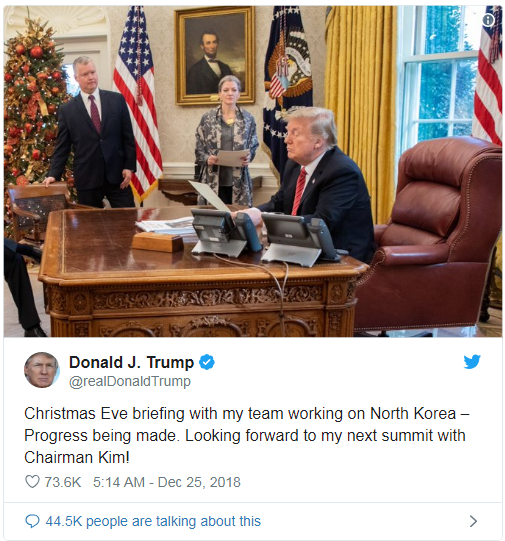 U.S. President Trump tweeted a picture of himself on Christmas Day as he reviewed progress on the Korean Peninsula.

U.S. President Trump tweeted a picture of himself on Christmas Day as he reviewed progress on the Korean Peninsula.

Biegun said last week the United States will be more lenient in enforcing its blanket ban on US citizens' travel to the state when dealing with aid workers, a goodwill gesture as Trump seeks a fresh summit.
Biegun also said in Seoul last week Washington was willing to discuss trust-building initiatives with Pyongyang.
(Cover: Barricades set up on the road leading to DPRK's Kaesong joint industrial complex at a ROK military checkpoint in the border city of Paju near the Demilitarized Zone (DMZ) dividing the two Koreas. /AFP Photo)
Source(s): AFP