Opinion: For U.S., extradition of Meng could be a dangerous mistake
Li Zheng 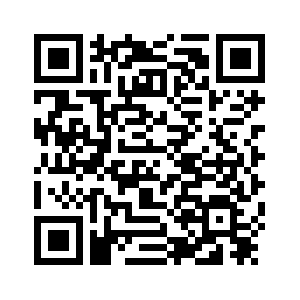 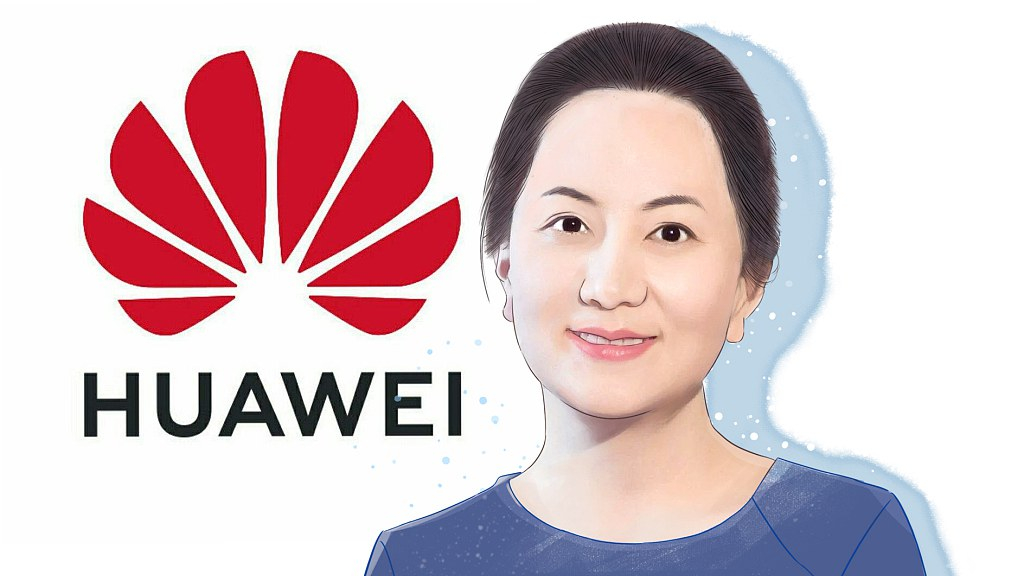 Editor's note: Li Zheng is an associate research fellow and director of the American Security Center, the Institute of American Studies, China Institutes of Contemporary International Relations. The article reflects the author's opinion, and not necessarily the views of CGTN.
U.S. Justice Department said on Tuesday that it will pursue the extradition of Huawei CFO Meng Wanzhou. A day earlier, Canadian Foreign Minister Chrystia Freeland told the media that Ottawa had already informed a formal request, which would be made to have Meng sent to the United States.
If it comes true, the Meng Wanzhou storm will enter a new stage. The extradition will not only damage Sino-U.S. mutual trust but also harm the business environment in the United States. It could be a very dangerous mistake.
Since the shocking arrest of Meng in Canada in December 2018, details behind this incident have been exposed all-roundly by the media around the world. The U.S. law enforcement agencies reportedly began preparing for the operation more than a year ago. They learned about Meng's flight information from the Canadian side in advance and arrested her at the airport.
Meanwhile, the U.S. and its allies are weakening Huawei in a comprehensive way, eliminating Huawei from 5G network construction, replacing Huawei's equipment in domestic communication facilities, and conducting strict security reviews on the company.
The U.S. Congress is even promoting a bipartisan proposal that will define Huawei and ZTE, two Chinese telecom giants, as threats to U.S. national security and prohibit American companies from selling parts, technology or services to them.
The above has clearly shown that Meng's arrest is not an isolated incident. It's a key step to suppress Huawei and other Chinese technology companies on a global scale. If Meng is extradited to the U.S. and eventually appears in the U.S. court, the case will be the most sensational one in recent years. 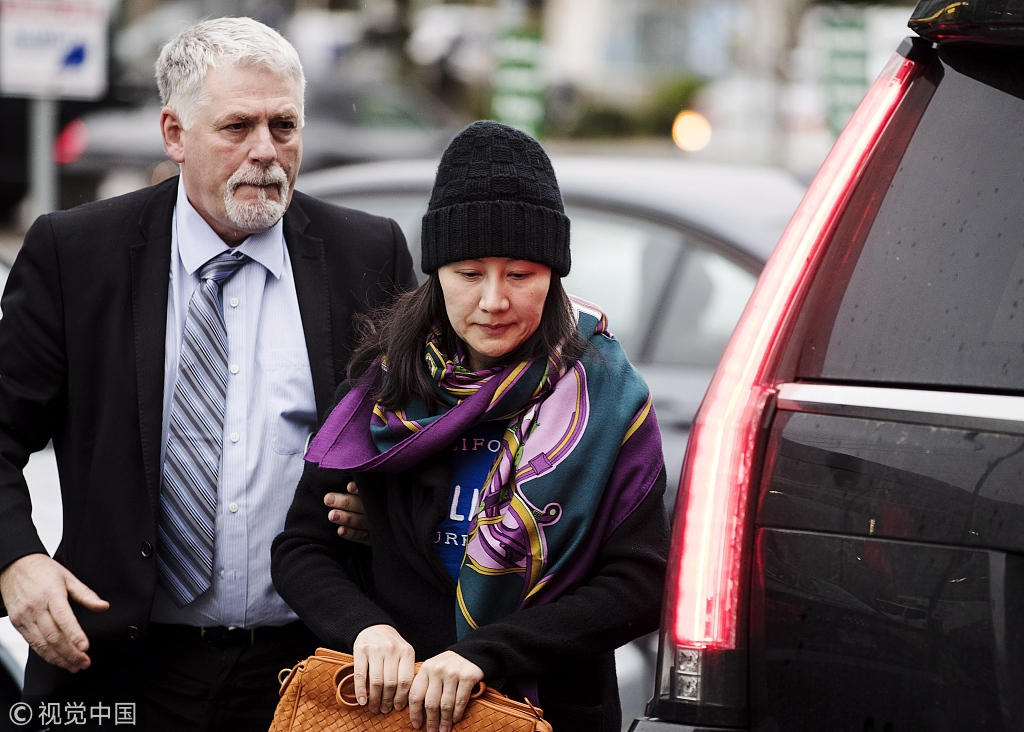 It's highly likely that Meng will encounter an unfair trial. Worse still, the U.S. government and the Congress will use this opportunity to discredit Huawei in an all-around way. By then, the incident may lead to a crisis in Sino-U.S. relations, which is likely to bring about hostile sentiments and reactions in both societies.
The Chinese government and the public have a strong opposition to Meng's arrest mainly due to three reasons:
Firstly, the U.S. government has been adopting a discriminatory approach to Huawei, which is significantly different from that to Western companies facing similar situations.
According to the Washington Post, South Korea's Samsung is an important mobile phone supplier to Iran, and Swedish telecom company Ericsson has been selling equipment to Iran during the sanction period.
These companies may do better than Huawei in reducing the use of American parts, but due to the globalization of the telecommunications industry, it is almost impossible for these companies to completely exclude American technology or patents.
U.S. law enforcement agencies have not conducted any investigations into the business of these Western companies. Therefore, accusing Huawei of violating the sanctions is an optional law enforcement act with strong political motives.
Secondly, the Meng incident coincides with the Sino-U.S. economic and trade negotiations in timing. Apparently, this is a trick by Washington to force Beijing to make concessions.
It brings about unnecessary troubles for the two governments to resolve economic and trade issues and increases public opinion pressure on the negotiations.
Chinese people are clear about Washington's true intention in arresting Meng and look down upon such an inferior behavior. They support the Chinese government to adopt a tougher and uncompromising position on the issue. 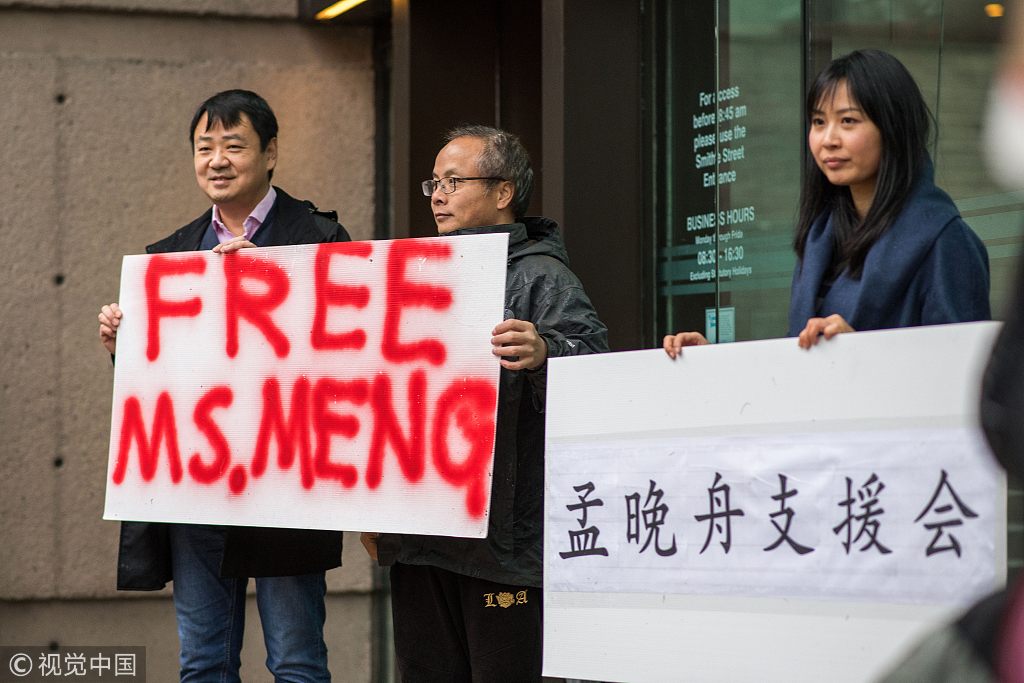 People protest against Meng's detention outside a bail hearing at the Supreme Court in Vancouver, Canada, December 11, 2018. /VCG Photo

People protest against Meng's detention outside a bail hearing at the Supreme Court in Vancouver, Canada, December 11, 2018. /VCG Photo

Finally, the U.S. government may misuse its intelligence agencies to suppress specific companies. This suspicion is not unfounded.
According to media reports, the "Five-Eye Alliance" – formed by the U.S., Canada, Australia, New Zealand, and the United Kingdom intelligence agencies – reached a consensus on Huawei in a meeting held in Canada last July.
Since then, the five countries have been acting actively to suppress Huawei. It is doubtful that intelligence agencies from these countries are taking espionage measures such as monitoring and cyber attacks on Huawei.
If it is the case, these approaches may be defined as commercial espionage and may also endanger the information security of Huawei users.
The above has not only hurt the legitimate rights and interests of Huawei and the feelings of the Chinese people but also jeopardized the national credibility and business environment of the United States.
Credibility comes from consistent adherence to rules. Once a precedent for breaking the rules occurs, the credibility can easily collapse.
If the U.S. government takes its unfair treatment of Meng as its right, it is difficult to rule out the possibility that the U.S. will apply similar practices to other emerging companies that are challenging U.S.'s leading position.
If the U.S. is indeed using intelligence agencies to intervene in Huawei's operations, these tools may also be widely used in other foreign companies that are operating in the U.S. and using American corporate services.
The above suspicions will seriously damage the business reputation of the U.S. The U.S. should be aware of the chain reaction of Meng's extradition and avoid this incident from escalating into an irreparable mistake.
(If you want to contribute and have specific expertise, please contact us at opinions@cgtn.com.)