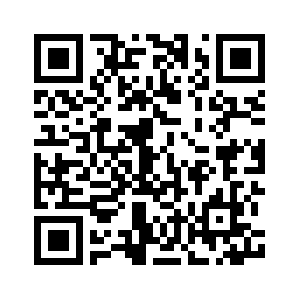 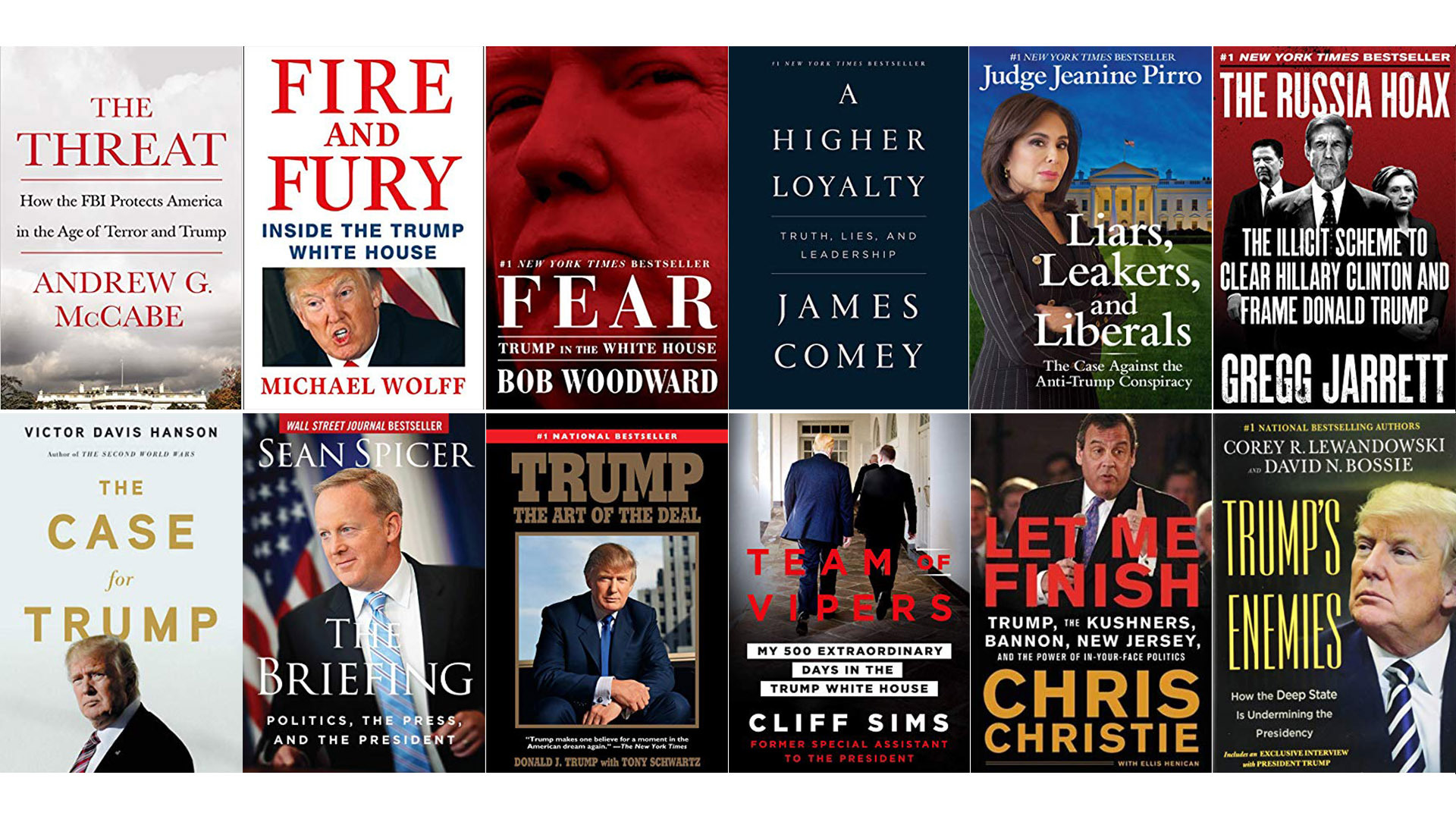 The election of Donald Trump has had many unforeseen consequences, including – in the presidency of a man not renowned for his reading habits – an explosion in the political book genre.
Two high profile publications about the Trump administration entered the New York Times non-fiction bestseller list this week alone, with former New Jersey governor Chris Christie's Let Me Finish debuting at No. 5 and ex-White House staffer Cliff Sims in at No. 3 with Team of Vipers. 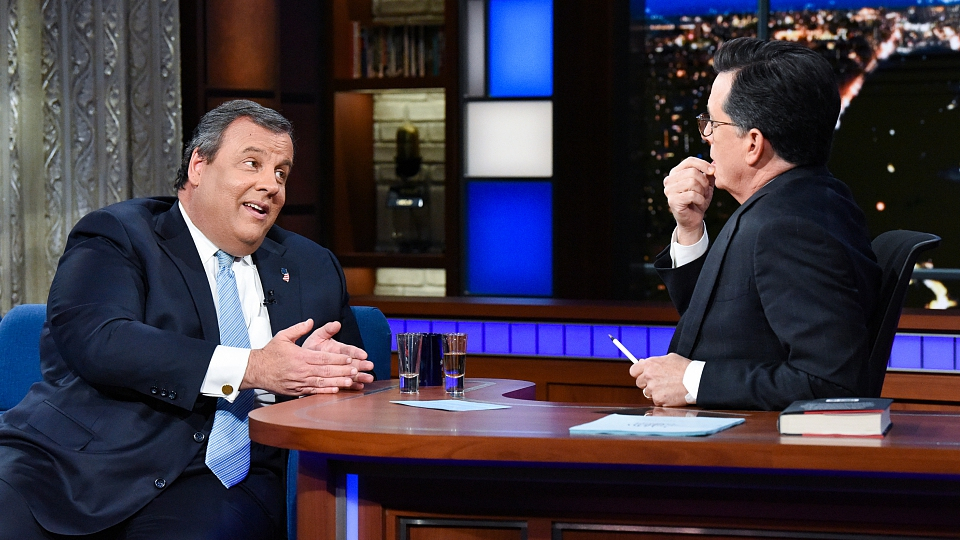 And they follow a catalogue of insiders, outsiders and chancers who have chronicled and profited from the Trump presidency – often aided by the president himself – to make 2018 one of the strongest years yet for political books.
"The pervasiveness of best-selling books that focused on the Trump administration, from both the left and the right, helped the political books category attain one of its best years ever," acknowledged NPD Group analyst Kristen McLean.
The books are about Trump, his campaign or his White House – and remarkably, are often told by people central to the story as the broader tale is still playing out.

"Influencers" are now part and parcel of marketing in the social media world, using the power of a high profile online individual to promote or endorse a product or brand to a wider audience.
The phenomena initially referred to people little-known in the physical world who developed a strong online presence, but increasingly refers to any individual with a large and engaged social media audience: an actor, sports star or even politician.
Trump is, of course, not a paid influencer – but his power to shape the conversation via a highly-engaged Twitter following of nearly 60 million and watching media is unparalleled in politics. More narrowly, in the realm of political books, he has used his unique position to promote books and keep the stories they tell in the news cycle. 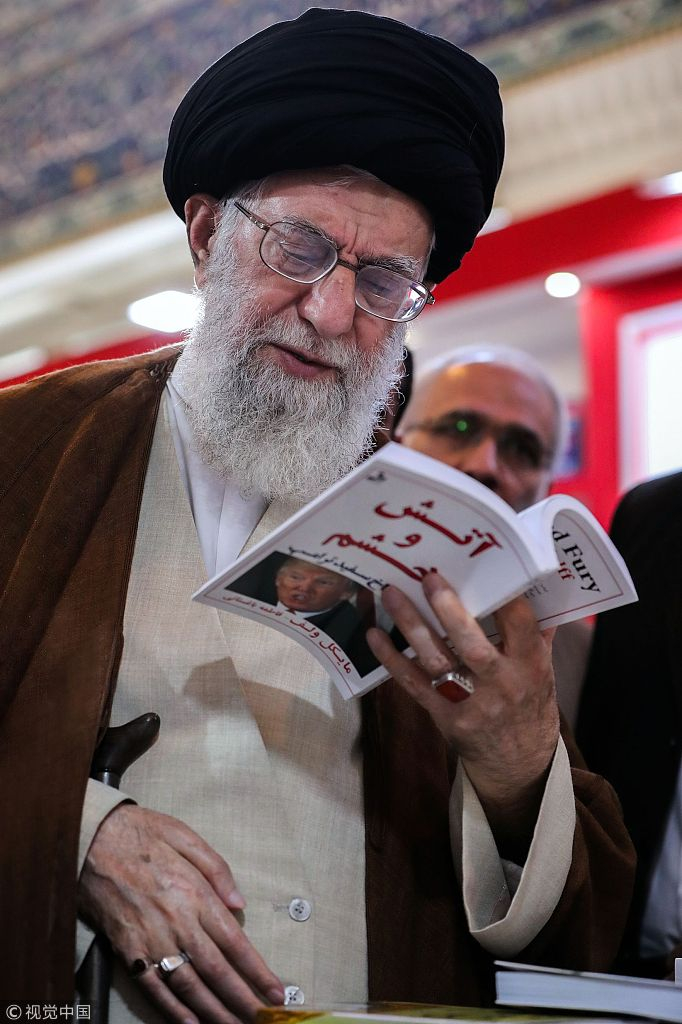 Iran's Supreme Leader Ayatollah Ali Khamenei reads a translation of the "Fire and Fury" by Michael Wolff during his tour of a book fair in Tehran, May 11, 2018. /VCG Photo

Iran's Supreme Leader Ayatollah Ali Khamenei reads a translation of the "Fire and Fury" by Michael Wolff during his tour of a book fair in Tehran, May 11, 2018. /VCG Photo

An anecdotal example is Team of Vipers, the recent release from Sims. CNN reported that the book surged up the Amazon bestseller list after Trump tweeted that the author was a "gofer" who had written a "boring book based on made up stories and fiction," though Sims was also on a media tour at the time so not all the credit can go to the president.
Whether Trump is an "ultra-influencer" – determined by the spikes in demand for a certain product after it's mentioned online, in the mold of Kylie Jenner or Kim Kardashian – is tough to judge.
Analysis by Lyst directly links posts by the sisters with major spikes in online searches for the related brand, but Trump's comments on political books have a broader influence than sales or searches: normally by keeping an issue in the media spotlight or distracting from another.

Trump isn't known as a reader – in fact, Timothy L. O'Brien, author of TrumpNation: The Art of Being the Donald, told the New York Times, "He doesn't read at all. I'm not overstating things here" – but he is a prolific critic.
A Vox analysis by Dylan Matthews of 12 books Trump has put his own name to reveals a longstanding "zero-sum" view of the world. The president's comments on the books written about him are usually similarly black and white.

Trump has expressed admiration for a long list of favorable publications, including The Russia Hoax by Fox News legal analyst Gregg Jarrett ("Great book!"), Liars, Leakers and Liberals by Fox News host Jeanine Pirro ("Go get it!"), and The Briefing by former White House press secretary Sean Spicer ("Really good, go get it!").
And sales were also good, with the books from both Jarrett and Pirro topping the Amazon bestseller lists. 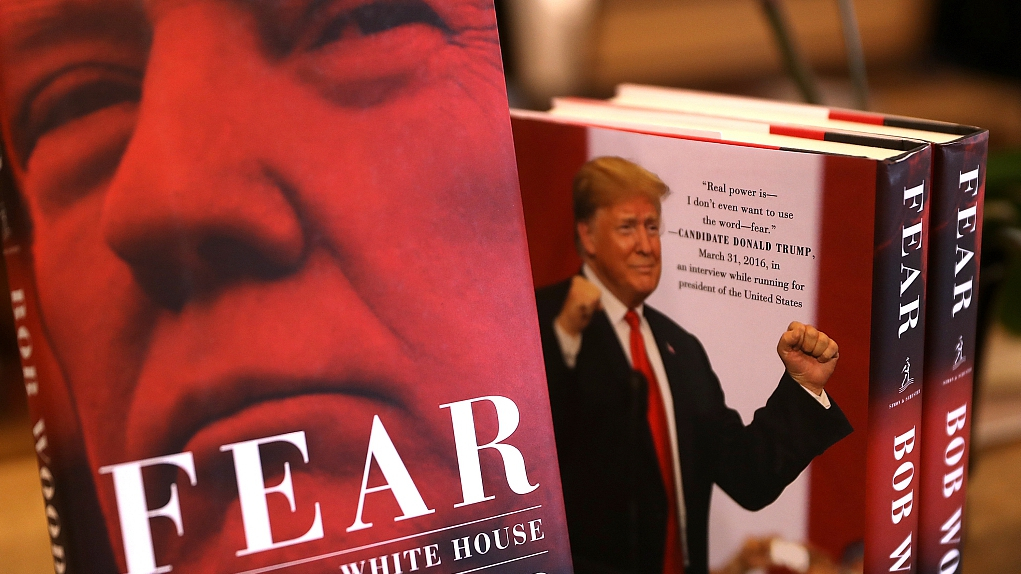 An analysis by Money.com of the less friendly raft of insider accounts and behind-the-scenes stories suggests they have sold considerably more copies, however, though many may not have done quite so well without fuel provided by the president's tweets.
Fire and Fury by Michael Wolff ("the Fake Book of a mentally deranged author"), Fear by Bob Woodward ("a con on the public"), and A Higher Loyalty by James Comey ("weak and untruthful slime ball") all topped the non-fiction bestseller lists in 2018.
Woodward sold 750,000 copies of Fear on the day of its release and 1.1 million in its first week, a record for publisher Simon & Schuster. 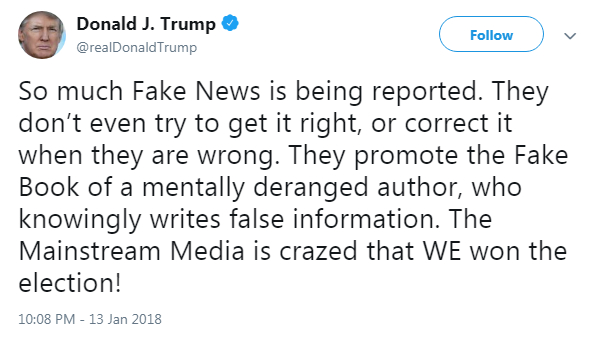 Alison Baverstock, associate professor of publishing at Kingston University and author of How to Market Books, told CGTN that "repeated rubbishing of books about him has only helped their sale… (but) maybe fanning the flames is just another strategy to get people talking about him."
Next week Andrew McCabe, whose firing as deputy director of the FBI was celebrated by Trump as a "great day for Democracy," will release an account of his career entitled The Threat: How the FBI Protects America in the Age of Terror and Trump.
Will the president stay quiet in a week which could end in another shutdown? For the sake of sales, McCabe presumably hopes not.

Book-writing goes hand-in-hand with most presidential runs: Democratic 2020 hopeful Kamala Harris' The Truths We Hold lies in the 10th place after four weeks in the New York Times bestseller list, while former Starbucks CEO Howard Schultz, considering an independent bid, is in fourth with From the Ground Up.
Trump released his own ghostwritten campaign tome, Crippled America: How to Make America Great Again, in November 2015. The book set out an agenda for the White House and was, unsurprisingly, the best seller among books published by 2016 candidates. Another campaign book, The America We Deserve, was published in 2000 when Trump was considering running on the Reform Party's ticket. 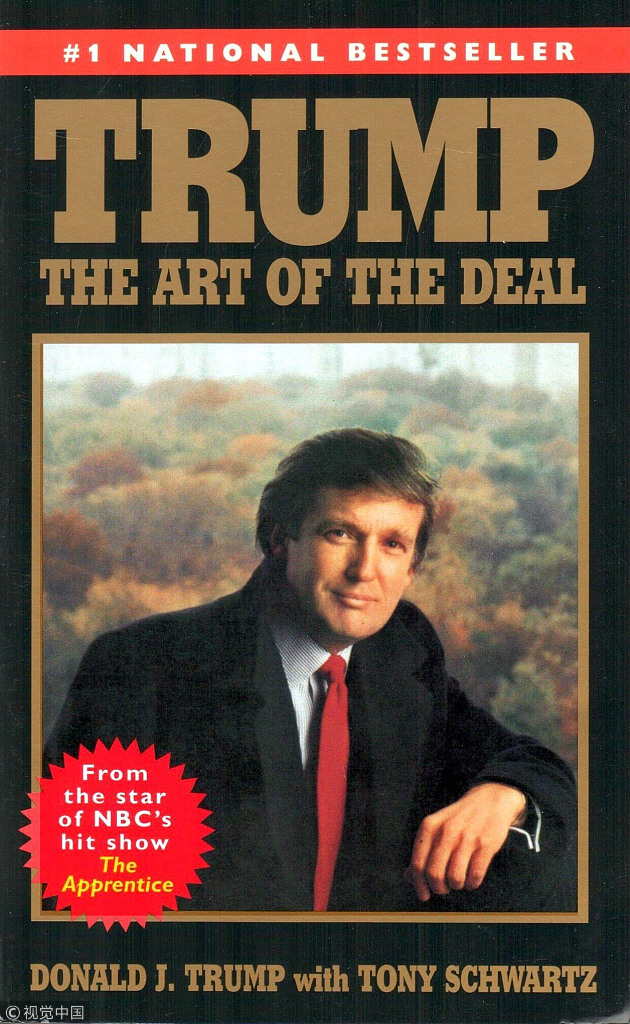 The Art of the Deal. /VCG Photo

The Art of the Deal. /VCG Photo

Trump has put his name to many other books down the years from How to Get Rich to The Best Golf Advice I Ever Received, but his career received a huge boost with The Art of the Deal in 1987, which spent 48 weeks on the New York Times bestseller list and helped broaden his name appeal.
According to Matthews, Trump's books do have consistent themes. "He's always been anti-immigrant, always been protectionist, always been fiercely nationalistic on matters of war and peace."
With Amazon listings showing at least 70 more Trump-related books scheduled for publication in 2019, those themes are set to help Trump's very personal presidential library grow and grow.