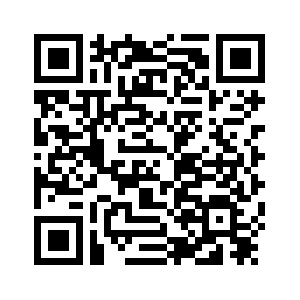 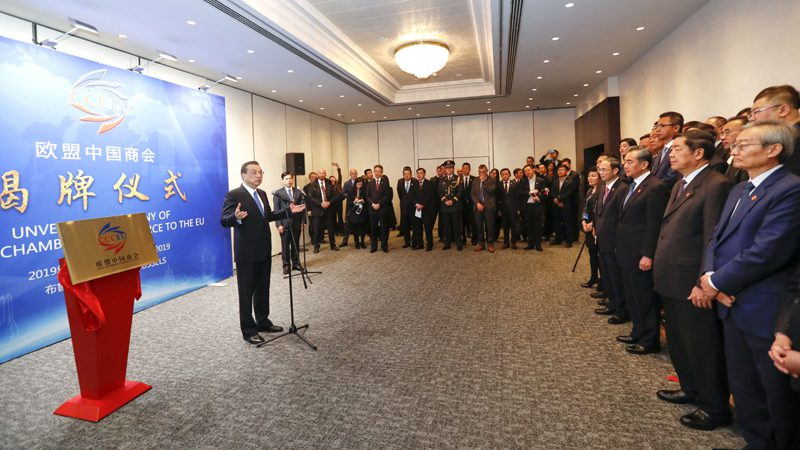 Editor's note: Zhao Minghao is a senior research fellow with the Charhar Institute. The article reflects the author’s opinion, and not necessarily the views of CGTN.
In April 2019, the frequent high-level exchanges between China and Europe attracted the attention of the international community. Following Chinese President Xi Jinping’s visit to Italy, Monaco and France, Chinese Premier Li Keqiang embarked on his European trip to attend the 21st China-European Union (EU) Leaders’ Meeting in Brussels and the 8th Summit Between China and Central and Eastern European Countries (CEEC) in Croatia and for an official visit to Croatia.
Over the past few years, China-EU cooperation under the Belt and Road Initiative (BRI) framework has been strengthened. On the EU side, the BRI creates synergy with the Juncker Plan to facilitate related projects by establishing mechanisms such as the EU-China Connectivity Platform.
In January 2016, China officially joined the European Bank for Reconstruction and Development. In late March 2019, a coordination committee about China's BRI was launched in Strasbourg, France, whose founding members consisted of 15 members of the European Parliament from the UK, the Netherlands and other countries. 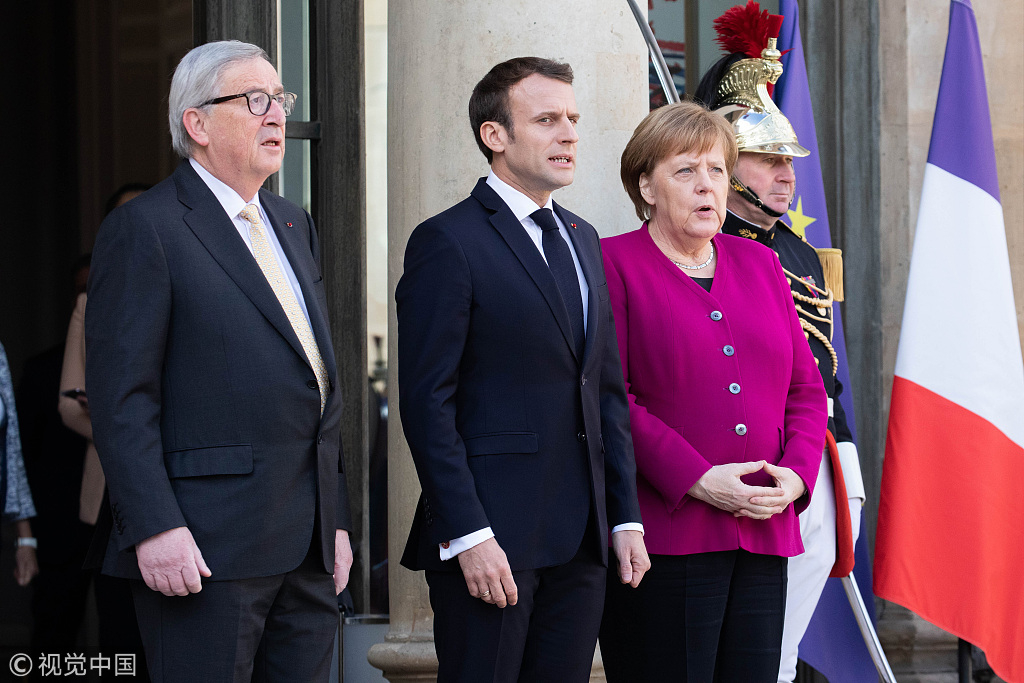 Although a renewed EU-China strategic outlook published by the European Commission positioned China as an economic competitor, it indicated that the Europe-Asia Connectivity Platform put forward by the EU could further engage EU and China for innovative cooperation.
During President Xi Jinping's recent visit to France, European Commission President Jean-Claude Juncker and German Chancellor Angela Merkel also went to Paris specially for the meeting with President Xi. Their move was indicative of the EU's positioning of China as a key global force and China-EU's joint advocacy of multilateralism.
In recent years, the CEEC has been the pioneer in endorsing the BRI. At present, in addition to Hungary, Poland, and the Czech Republic, Italy, Greece, Portugal and other European countries have formally signed BRI cooperation documents with China. As a member of the G7, Italy's entry into the BRI is of particular significance.
In fact, during the visit of the Prime Minister of Luxembourg Xavier Bettel to China in late March 2019, the two sides also signed a memorandum of understanding on BRI cooperation. Despite its size, Luxembourg, like Italy, is one of the six founding countries of the EU. Luxembourg wishes to strengthen financial cooperation with China under the BRI framework.
The Luxembourg Stock Exchange is already in collaboration with Chinese institutions such as the Shanghai Stock Exchange and the Bank of China in many fields, while preparation is also underway for the annual meeting of the Asian Infrastructure Investment Bank (AIIB) to be held in Luxembourg this July. 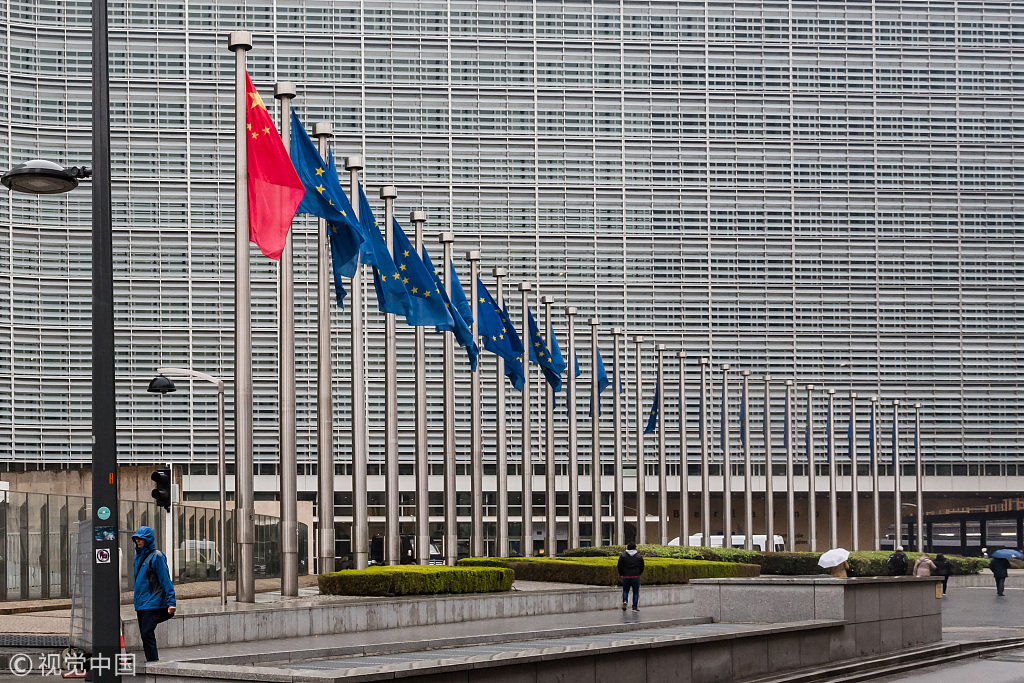 China's national flag (front), is seen beside the European Union (EU) flags outside the Berlaymont building during the EU-China summit in Brussels, Belgium, April 9, 2019. /VCG Photo

China's national flag (front), is seen beside the European Union (EU) flags outside the Berlaymont building during the EU-China summit in Brussels, Belgium, April 9, 2019. /VCG Photo

Northern Europe is also deepening engagement with the BRI, with Finland and Norway vigorously promoting the Arctic Corridor project. As some Finnish scholars and officials have stressed, connectivity with China has enabled Finland to rethink its geopolitical status from a new perspective: Finland is no longer an island, but a pivot in linking Europe and Asia.
There has also been growing interest in the BRI among European private financial institutions. For example, Standard Chartered, with branches in more than 40 countries along the Belt and Road, has offered to invest at least 20 billion U.S. dollars by 2020 to provide financial support for BRI projects.
Admittedly, China-EU cooperation under the BRI framework faces various challenges. Many Europeans are still skeptical about the BRI, especially its geopolitical and security implications.
China and the EU also need to better address their differences on rules, standards and laws. Some European scholars worry that China-CEEC cooperation is weighed down by inadequate transparency and potential risks of violating the EU rules or even harming Europe's cohesion.
There is also the U.S. factor. By explicitly labeling China as a “strategic rival,” the Trump administration is stepping up its efforts to stop European participation in the BRI.
In response, Malta's Finance Minister Edward Scicluna said, “For a country to survive and to be competitive, especially a small country, we need to have diversification.” It is very unwise of the U.S. to ignore the practical development needs of Europe and to obstruct China-EU cooperation under the BRI.
(Cover photo: Chinese Premier Li Keqiang attends the unveiling ceremony of the China Chamber of Commerce to the EU at Brussels, Belgium, April 8, 2019. /VCG Photo)
(If you want to contribute and have specific expertise, please contact us at opinions@cgtn.com)