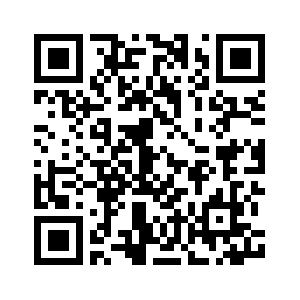 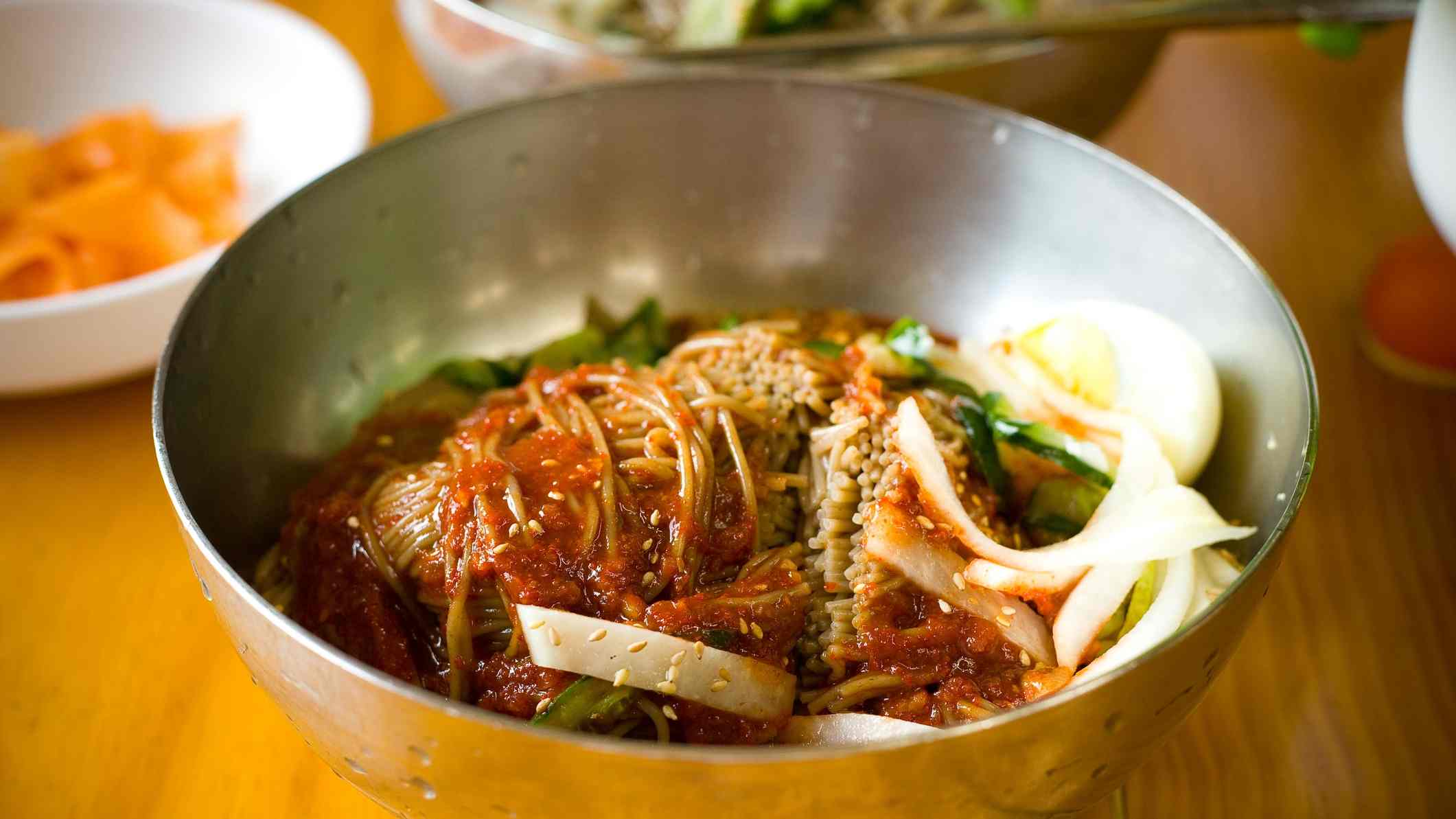 Noodles are an iconic Asian dish, so popular that even Italians fell in love with them after being introduced by the intrepid merchant Marco Polo.
But there is only one country where noodle dishes are almost always served cold, even swimming in an icy broth, and that is the Republic of Korea (ROK), where the unifying power of this national dish cannot be overstated.
When Kim Jong Un met with ROK President Moon Jae-in for their first summit last year he brought with him Pyongyang Naengmyeon, the Democratic People's Republic of Korea's (DPRK) signature noodle dish.
Sales of Pyongyang naengmyeon shot up in the ROK and northern style restaurants were booked out for weeks after the summit.
The closest ROK equivalent is Makguksu, because it is also made from the very first cold noodle ingredient- buckwheat.
"Buckwheat is not originally from here, it is from the northeast part of China and Tibet in the alpine highlands," said Kim Si-Mok, who works as a guide at the Chuncheon Makguksu Museum, nestled in the mountains east of the capital Seoul.
"It might have been brought here during the three kingdoms period around the 6th century. It began being cultivated at temples in mountain areas, and we started to eat it by making noodles," said Kim.
In the Korea Peninsula, buckwheat is considered a cooling food, though before refrigeration its products were traditionally hard to store.
So a simple technique was developed: grind the flour, knead the dough then squeeze out some noodles for quick consumption using a simple press that relies on human bodyweight.
From the mouth of the press the fresh noodles fall straight into boiling water.
Then they are transferred to a sink to be separated and chilled with cold water, topped with fresh vegetables and condiments like vinegar, mustard and sesame oil and a red bean-based sauce.
Many of the most popular ROK cold noodle dishes, like bibim and mul naengmyeon, now use starch from potatoes and sweet potatoes, but the technique is similar.
At the Chuncheon Makguksu Museum, visitors can eat noodles they make themselves by hand.
"We use the same technique as our ancestors, we use our hands to knead and press the dough and then we eat them," said Jeon Kyung-soo, the head of team at the museum's Makguksu Experience.
A group of Chinese tourists packed the museum's upper floor Makguksu Experience room, where children handmix the buckwheat dough before swinging from the long arm of the noodle press. 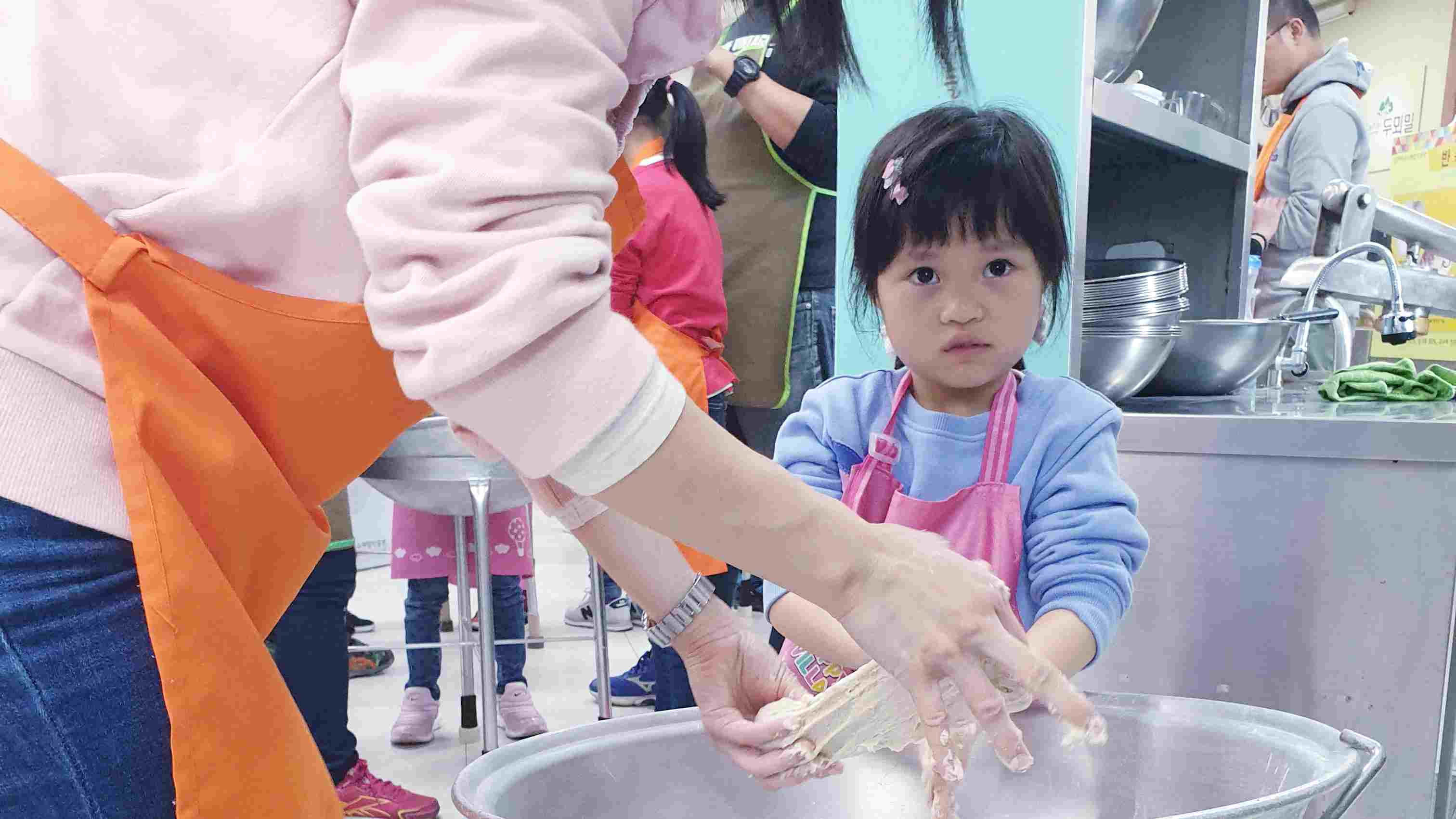 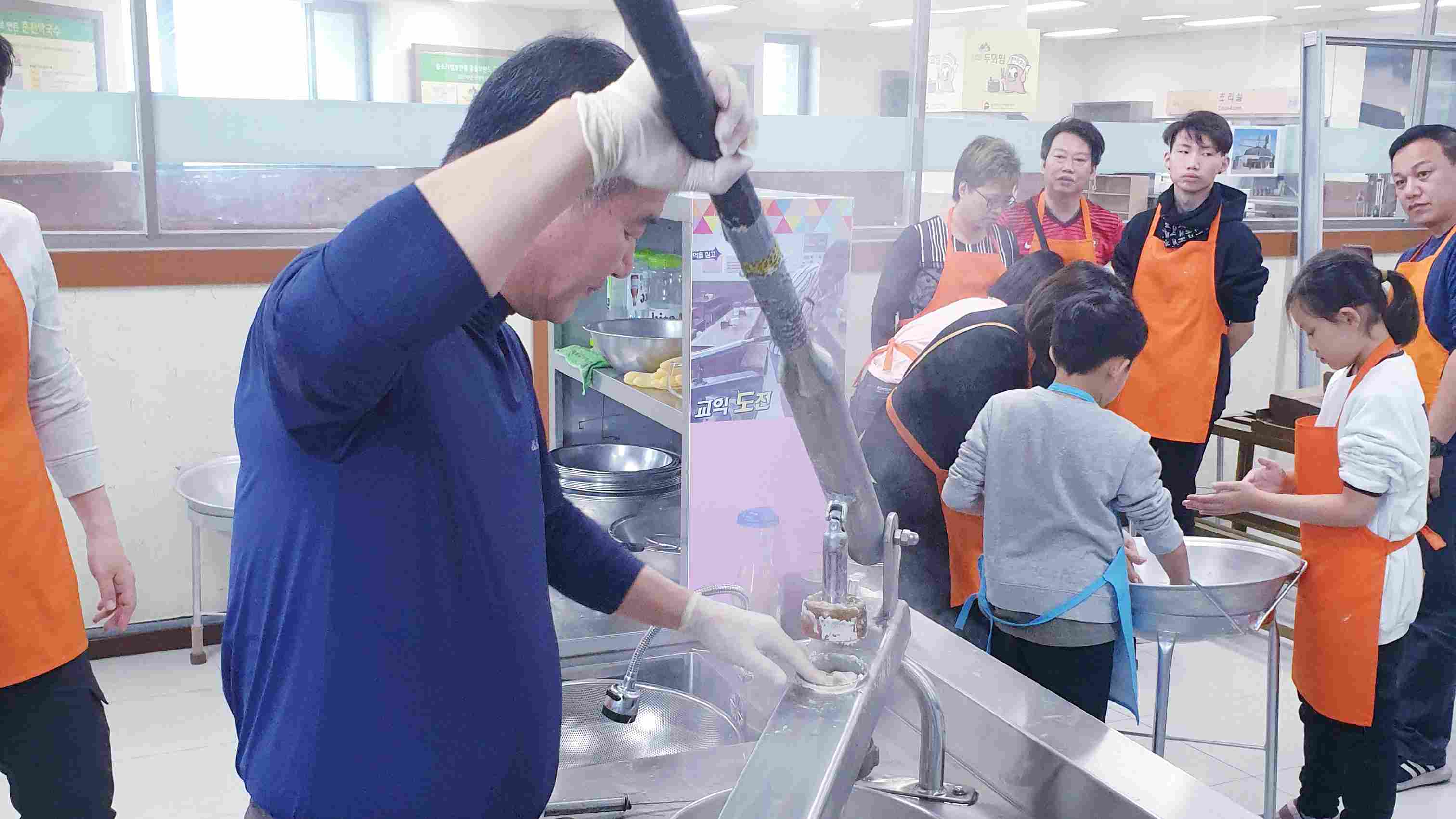 A guide prepares to demonstrate the noodle press. /CGTN Photo

A guide prepares to demonstrate the noodle press. /CGTN Photo 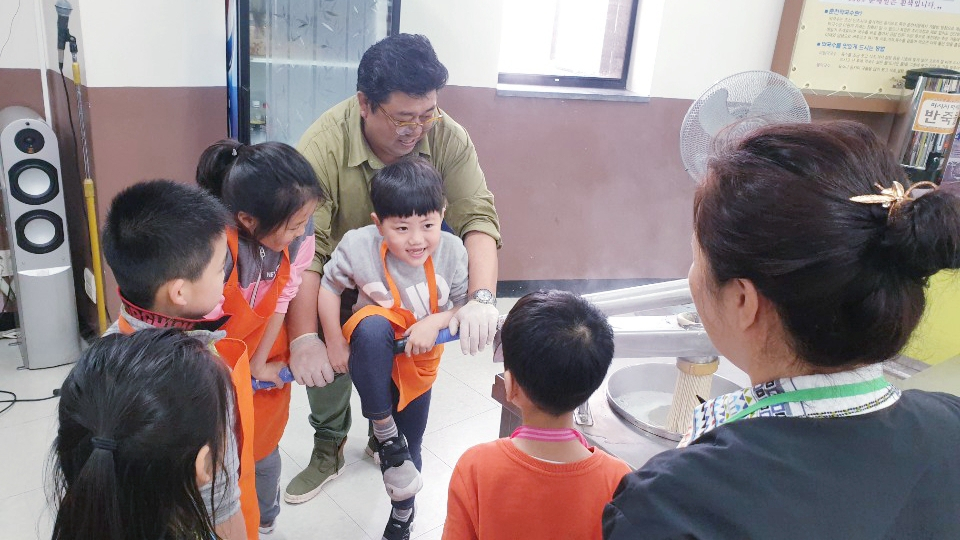 Squeezing out noodles on the press using bodyweight. /CGTN Photo

Squeezing out noodles on the press using bodyweight. /CGTN Photo 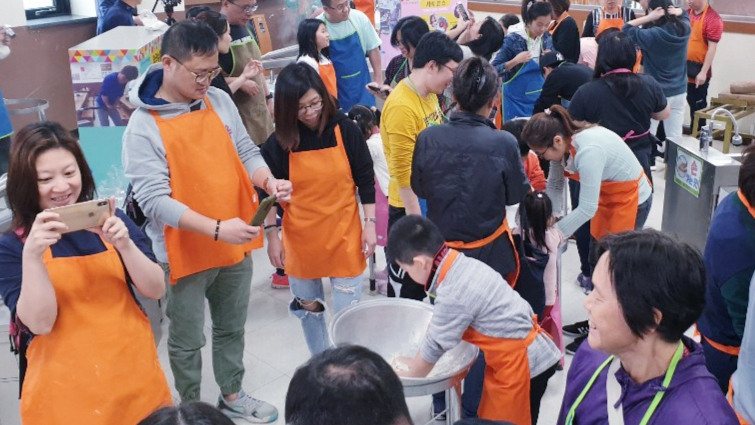 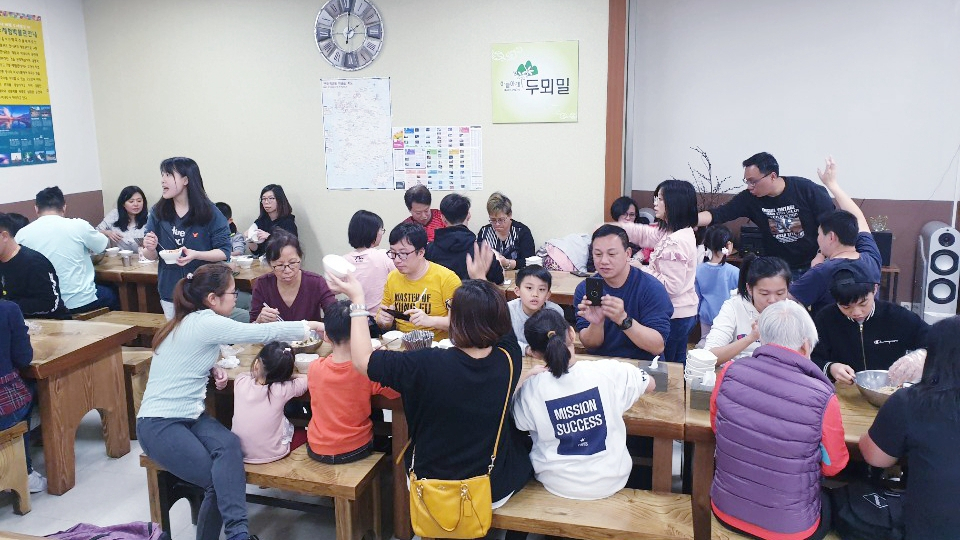 Chinese tourists eating noodles they have just made. /CGTN Photo

Chinese tourists eating noodles they have just made. /CGTN Photo 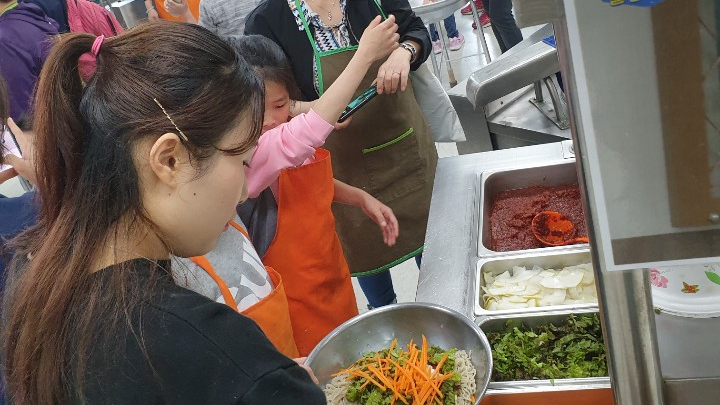 Vegetables and sauce being added to noodles. /CGTN Photo

Vegetables and sauce being added to noodles. /CGTN Photo

The guides then boil and cool the noodles with cold water before serving them to children and their parents, who enjoy the tactile experience of mixing the sauce and vegetables with noodles by hand.
In the ROK cold noodles are eaten all year round, though as a cooling food they are most popular in summer, which means in the northern hemisphere cold noodle season is just around the corner.
(Cover: VCG Photo)