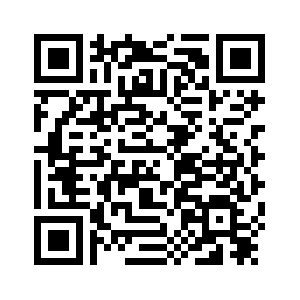 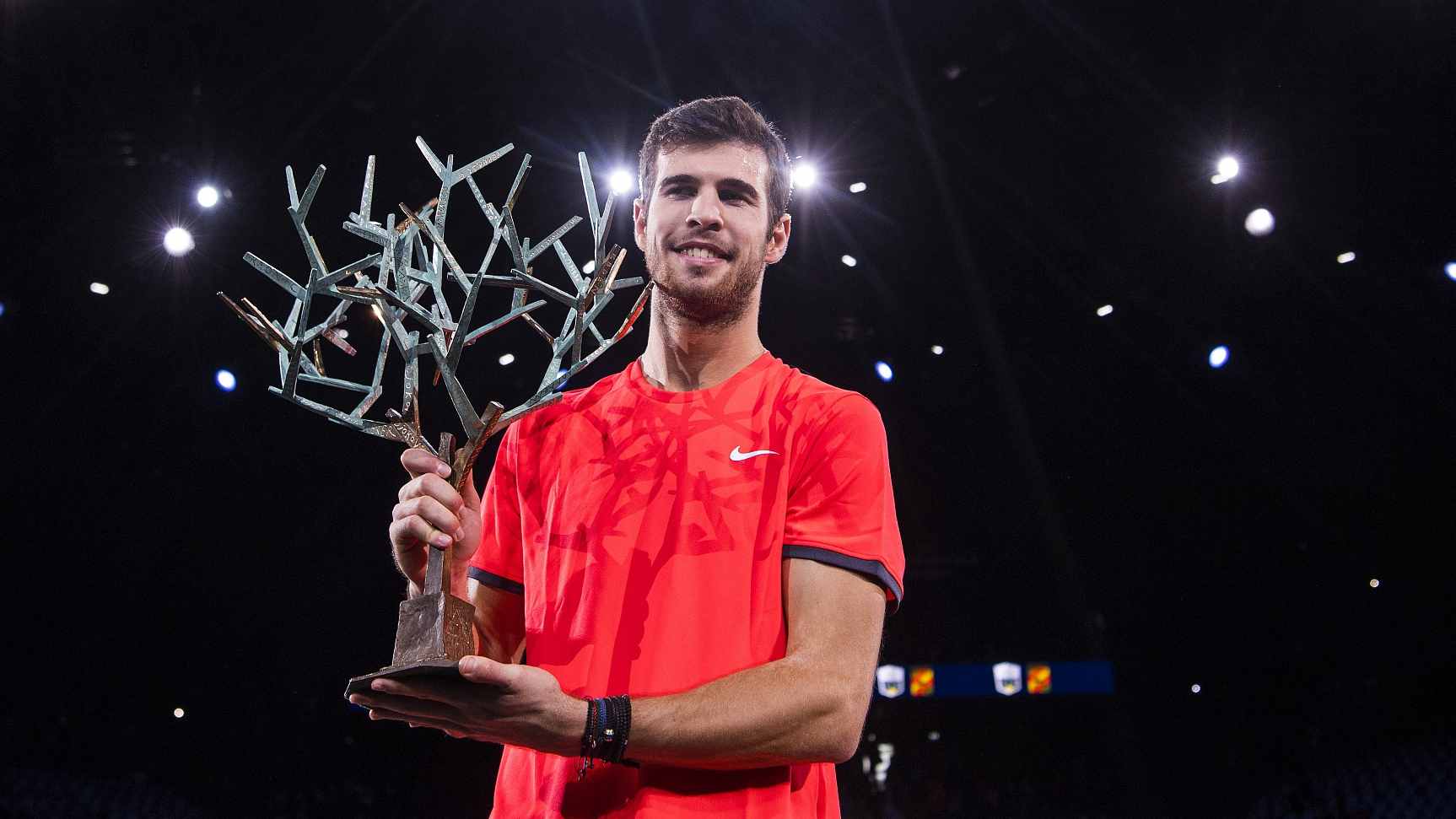 Karen Khachanov caused one of the shocks of the tennis year by overpowering Novak Djokovic 7-5, 6-4 in the Paris Masters final on Sunday to end the Serbian's remarkable spell of dominance in the men's game.
The 22-year-old Russian has for some time been seen as one of the rising young talents of the sport but few could have envisaged his demolition of the Serbian superstar, who was on a three-month, 22-match winning streak.
Djokovic was expected to celebrate his return to the world number one on Monday with a record-extending fifth Paris title but he went down in one hour 37 minutes amid a hail of 31 crushing winners from the Muscovite's racket.
“To finish my season like this is a dream,” Khachanov told the crowd in the Bercy arena, explaining that Djokovic has always been an inspiration to him.
He even took a leaf out of the Serb's book of celebrations by bending down to kiss the Centre Court. “Maybe I'm not crying, but still I'm really happy,” he told reporters later. 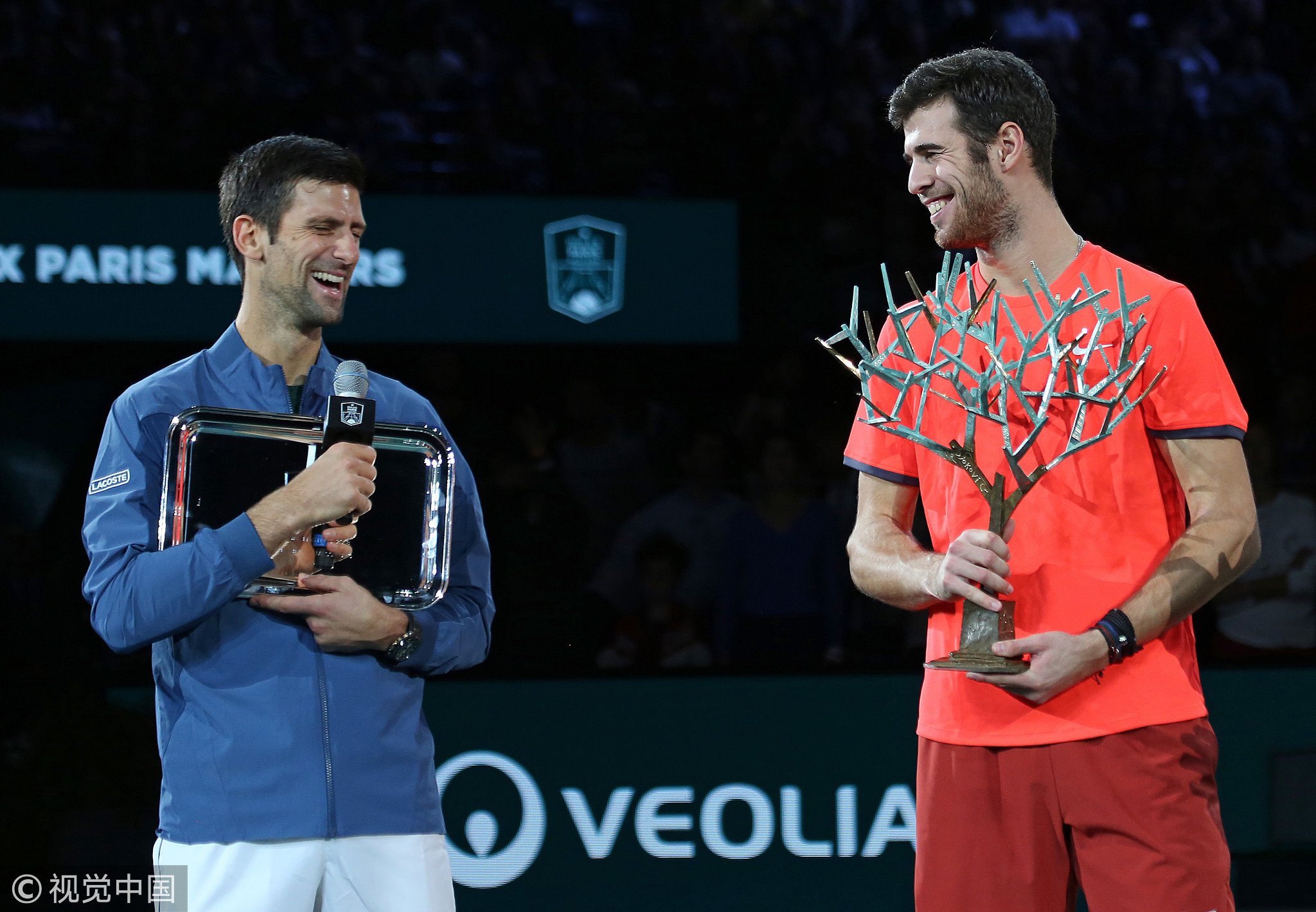 Novak Djokovic (L) and Karen Khachanov share a laugh after their finals match at the Rolex Paris Masters on November 4, 2018. /VCG Photo

Novak Djokovic (L) and Karen Khachanov share a laugh after their finals match at the Rolex Paris Masters on November 4, 2018. /VCG Photo

Khachanov, a strapping 1.98-metre huge hitter with surprisingly fleet movement around the court for such a big man, took advantage of Djokovic being a little under the weather after a week struggling with flu-like symptoms.
Yet even though the Serb admitted he had not recovered physically after his epic three-hour win over Roger Federer in Saturday's semi-final, he had nothing but praise for the outstanding quality of Khachanov's attacking game.
“All credit to Karen, he did a great job today. He deserves the trophy,” Djokovic told the crowd.
Earning his fourth straight win over a top-10 player this week, Khachanov, whose muscular game resembles that of his childhood hero Marat Safin, a Russian three-times winner in Paris, picked up the biggest title of his burgeoning career.
It was his third triumph of the year, all on indoor hard courts, and will rocket Khachanov from 18th in the world to a career-high 11th on Monday.
Even better news for a sport always on the lookout for the next bright young thing to challenge the established order of Djokovic, Federer and Rafael Nadal, Khachanov showed why he has the weapons and temperament to offer them a real threat.
“I'm sure we'll see a lot of great games from him in the future,” conceded Djokovic.
What was most impressive about Khachanov's victory was the manner in which he bullied Djokovic around the court with the depth and booming accuracy of his groundstrokes and his confidence in his ventures to the net. 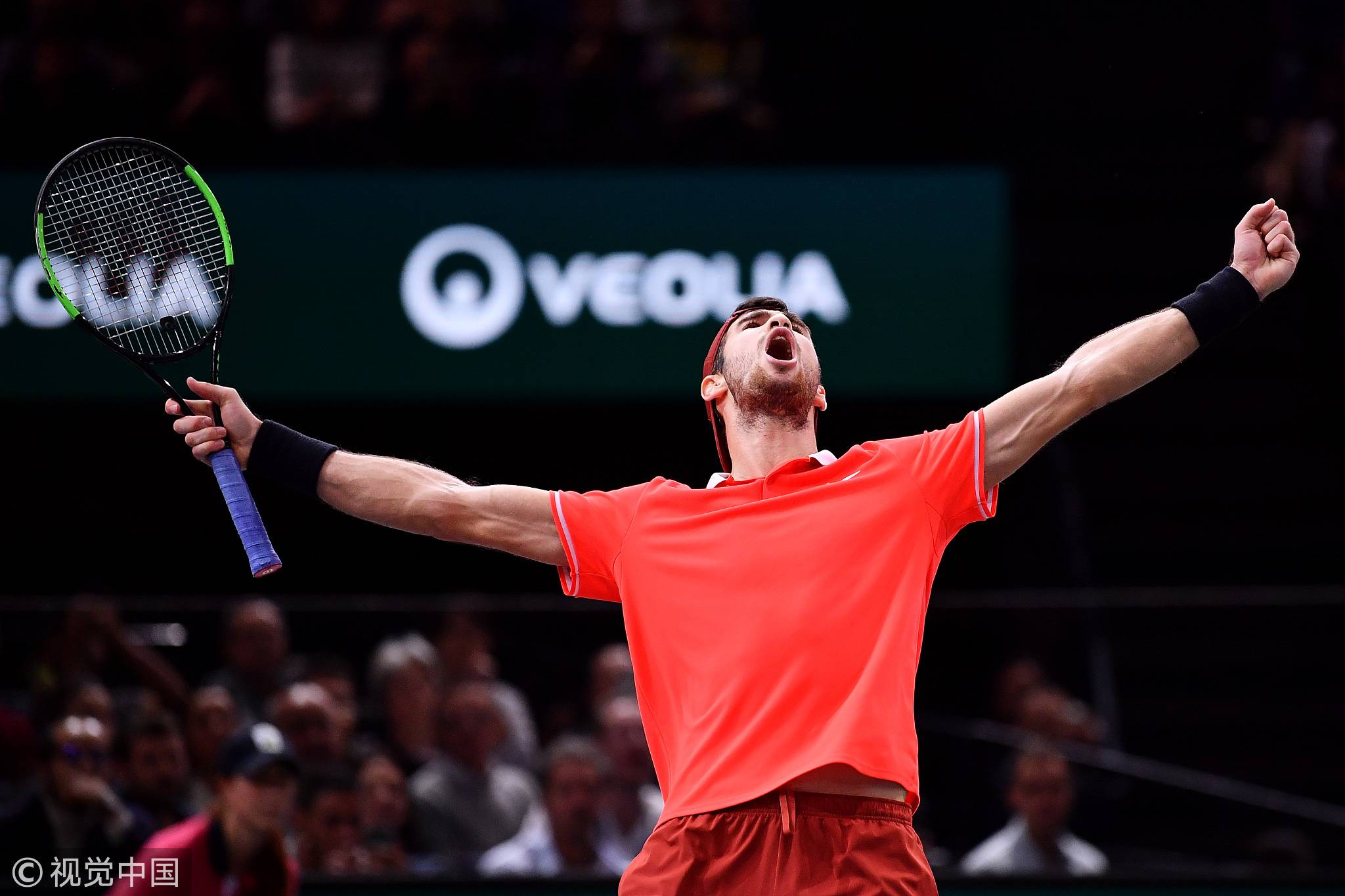 The only previous time they had met, Djokovic crushed the Russian in straight sets at Wimbledon and, briefly, it seemed as if the same fate could await Khachanov again as he was out-rallied to go 3-1 down in the opening set.
Instead, up against a great champion looking for a fourth consecutive tournament win, following his victories at the Cincinnati Masters, the US Open and the Shanghai Masters, the chess-loving Russian changed his strategy.
“After that, my intensity (changed), I stepped in more inside the court, started to move him and maybe he didn't expect that,” said Khachanov, who did not give up another break point in the rest of the match with his pinpoint, heavy serving.
Constantly keeping the master of defense on the back foot, he converted a decisive break point at 5-5 with an irretrievable backhand at full stretch before taking the set in 57 minutes.
Then, with Djokovic clearly breathing harder, he earned the decisive break to go 2-1 up in the second set after the Serbian pushed a weary-looking backhand into the net.
Yet Djokovic did not sound too dismayed, saying he hoped to be physically 100 percent for the ATP Tour finals which start in London next Sunday.
“I'm going to be number one tomorrow, officially. What more can I ask for? I mean, I had a most amazing last five months of the year.”
Source(s): Reuters