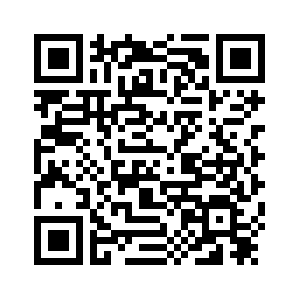 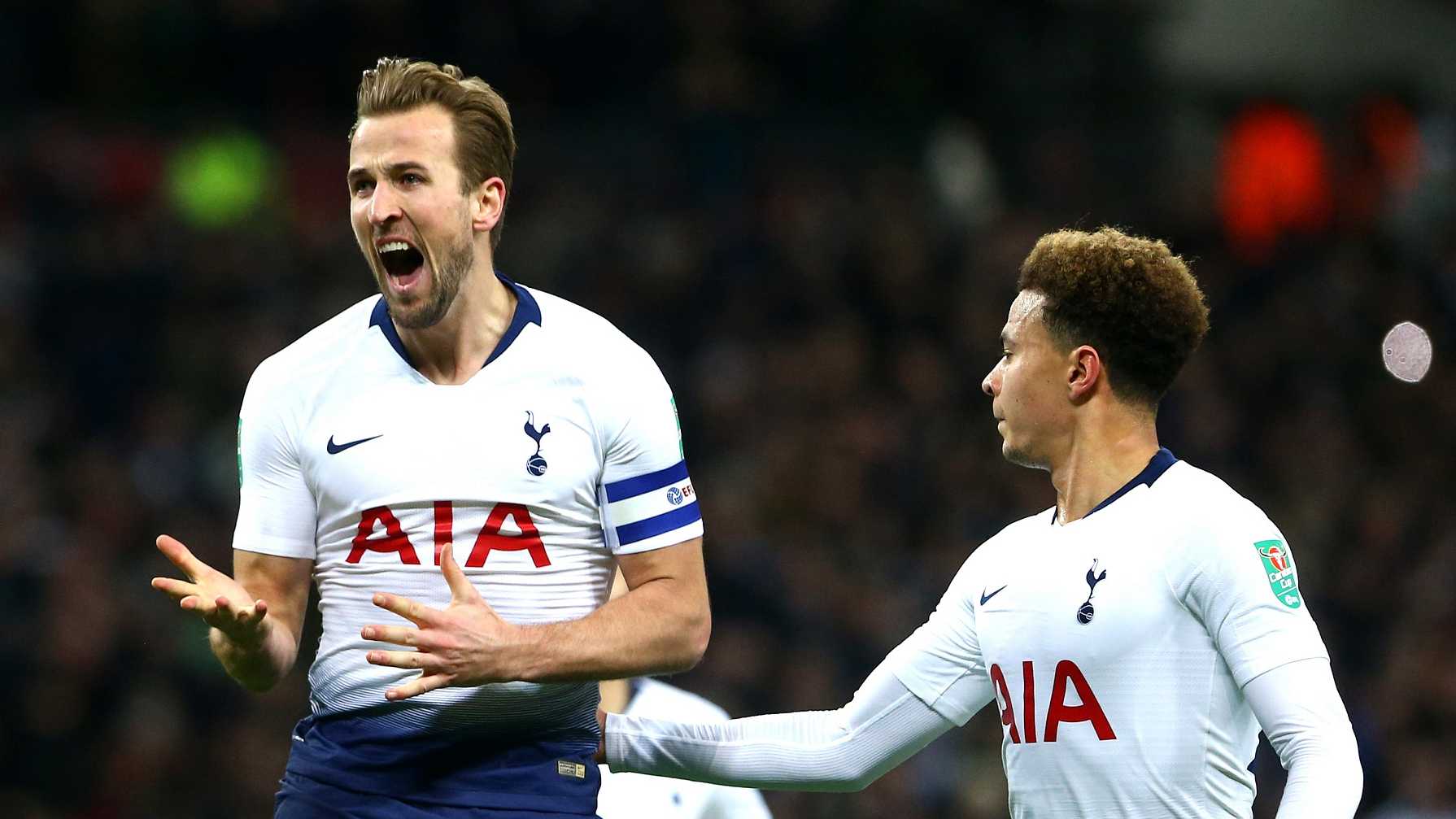 Tottenham Hotspur gained a slender advantage in their League Cup semi-final against London rivals Chelsea as Harry Kane's penalty earned them a gritty 1-0 first-leg win at Wembley on Tuesday.
Kane's 26th-minute spot kick, his 160th goal for the club, was awarded after a lengthy, but correct, VAR decision and means Tottenham remain on course to claim their first silverware since winning the League Cup against Chelsea in 2008.
They still have a long way to go, however, and Chelsea will feel confident going into the second leg at Stamford Bridge on Jan. 24 having outplayed their hosts at times. 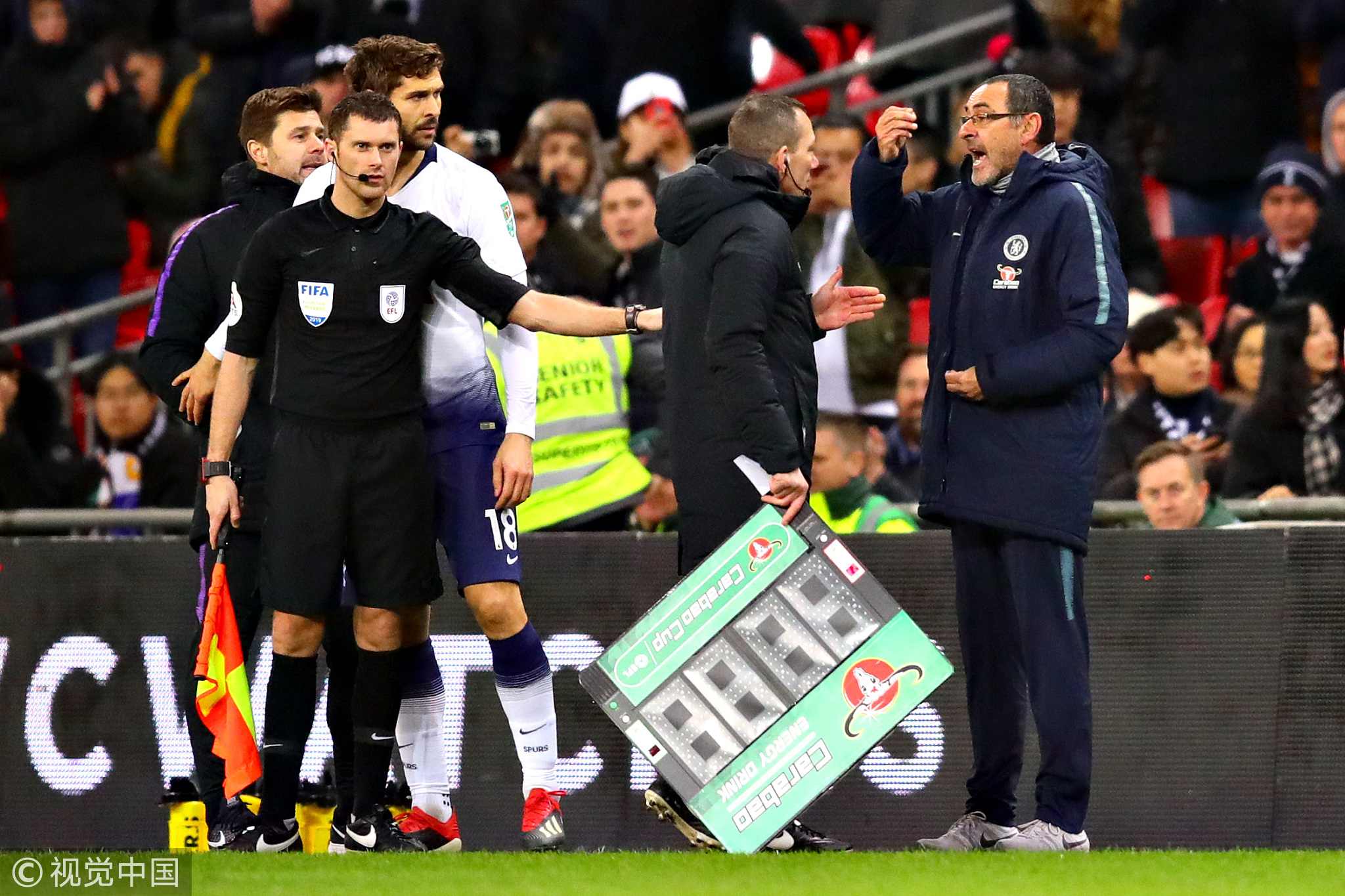 Chelsea manager Maurizio Sarri (R) argues with the fourth official (C) on the sidelines during the match. /VCG Photo

Chelsea manager Maurizio Sarri (R) argues with the fourth official (C) on the sidelines during the match. /VCG Photo

Maurizio Sarri's side were twice denied by the woodwork and they dominated the second half as Tottenham dug deep.
Tottenham have now won three consecutive matches against Chelsea for the first time since a run of five between 1961 and 1963, but unlike when they outclassed the Blues in November, winning 3-1 in the Premier League, this was a night for hard graft.
Mauricio Pochettino's side began brightly and had a shout for a penalty in the opening minutes when Dele Alli played a magnificent pass through to Son Heung-min who appeared to be knocked off balance by Chelsea defender Andreas Christensen.
Kane then tested keeper Kepa Arrizabalaga with an acrobatic overhead volley.
VAR, used in various FA Cup ties at the weekend and most probably in the Premier League next season, has had a mixed reception but the technology proved correct on Tuesday to give Tottenham the edge ahead of the second leg.
There appeared little doubt that Kane was taken out by Arrizabalaga as he rounded the Spanish keeper but referee Michael Oliver initially did not award a penalty as he checked, firstly whether Kane had been onside in the build-up, and then whether indeed there had been contacting. 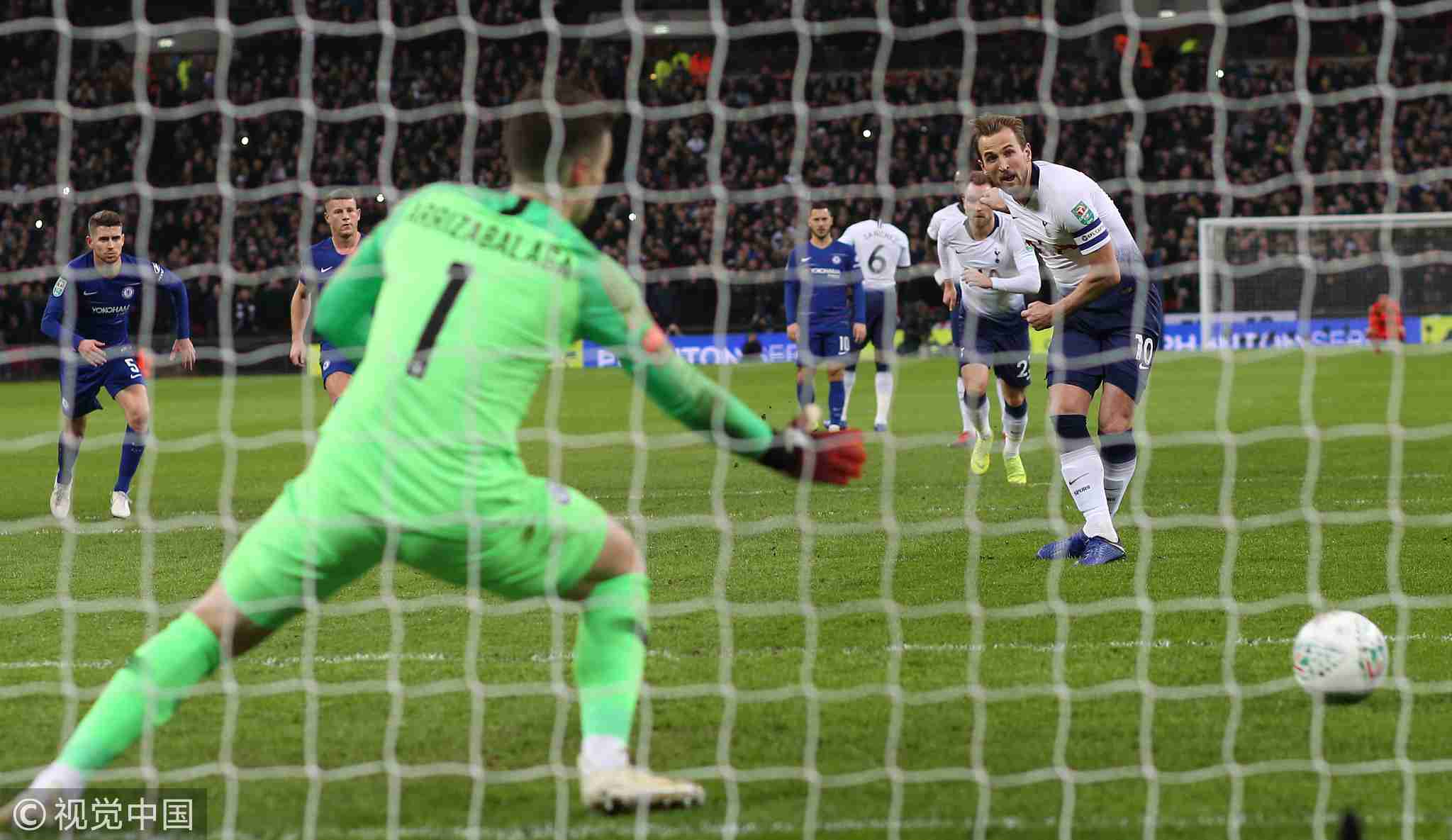 Harry Kane (R) of Tottenham scores the winning goal from the penalty spot during the Carabao cup match between Tottenham Hotspur and Chelsea FC at Wembley Stadium, January 8, 2019. /VCG Photo

Harry Kane (R) of Tottenham scores the winning goal from the penalty spot during the Carabao cup match between Tottenham Hotspur and Chelsea FC at Wembley Stadium, January 8, 2019. /VCG Photo

Eventually, Oliver pointed to the spot and produced a yellow card, rather than a red, for Arrizabalaga and Kane drilled his spot-kick low into the corner to score for the sixth successive match in all competitions and move above Cliff Jones into the fourth spot on Tottenham's all-time goalscorers' list.
“I played to the whistle and nicked it round the keeper, it was a clear penalty. VAR is there for a reason and they got it right,” Kane said.
“Chelsea had a point to prove, they didn't play well last time they were here. It was important we won the game going into the second leg.”
After going behind Chelsea began to push Tottenham back with youngster Callum Hudson-Odoi a lively presence in midfield and Eden Hazard a constant threat.
N'Golo Kante touched Marcos Alonso's cross against the post and seconds before the interval Hudson-Odoi's cross looked as though it might loop over Paulo Gazzaniga before Tottenham's Argentine keeper clawed it onto the woodwork.
Tottenham were made to suffer after the interval with Chelsea enjoying almost complete control.
Hazard and Kane both forced Gazzaniga into sharp saves while Christensen wasted Chelsea's best chance when he volleyed tamely wide with the goal at his mercy.
“We played with a very good level of application, with determination and with soul,” Sarri told reporters. “It won't be easy to win at Stamford Bridge but if we are able to play at the same level as today I think we can do it.”
Holders Manchester City face Burton Albion in the first leg of their semi-final on Wednesday.
Source(s): Reuters