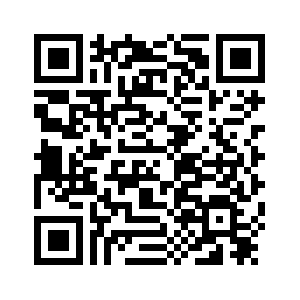 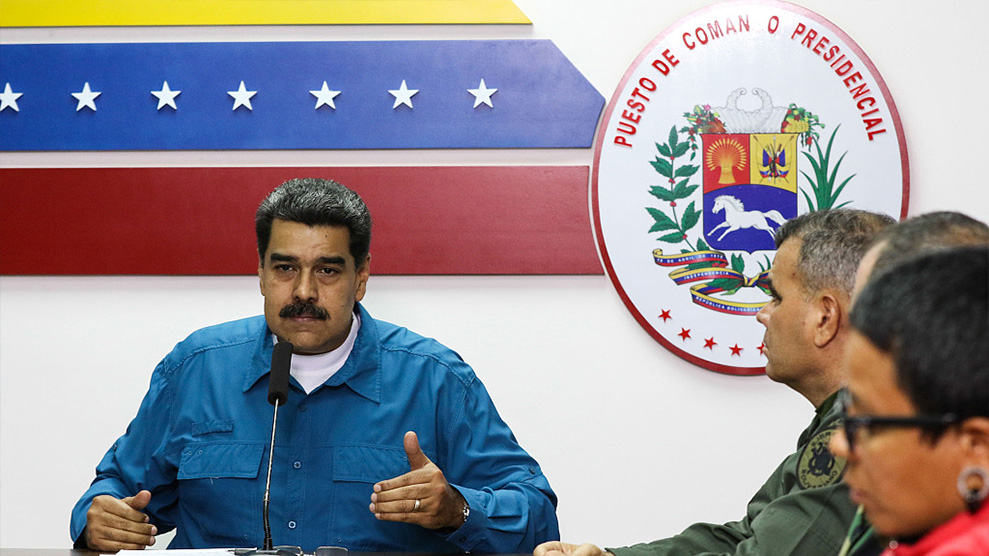 Venezuela's President Nicolas Maduro announced 30 days of electricity rationing on Sunday, after his government said it was reducing the length of the workday and keeping schools closed due to devastating blackouts plaguing the country.
The move came after the government blamed repeated blackouts in March on sabotage. There is not enough electricity to go around and the power crisis is believed to stay for some time.
Speaking on state television, Maduro said he had approved "a 30-day plan" to ration power, "with an emphasis on guaranteeing water service."
Crippled infrastructure, little investment in the power grid, "brain drain" of qualified personnel, and poor maintenance are believed to contribute to electricity problem.
Earlier on Sunday, authorities announced other measures as a result of the electricity shortage. 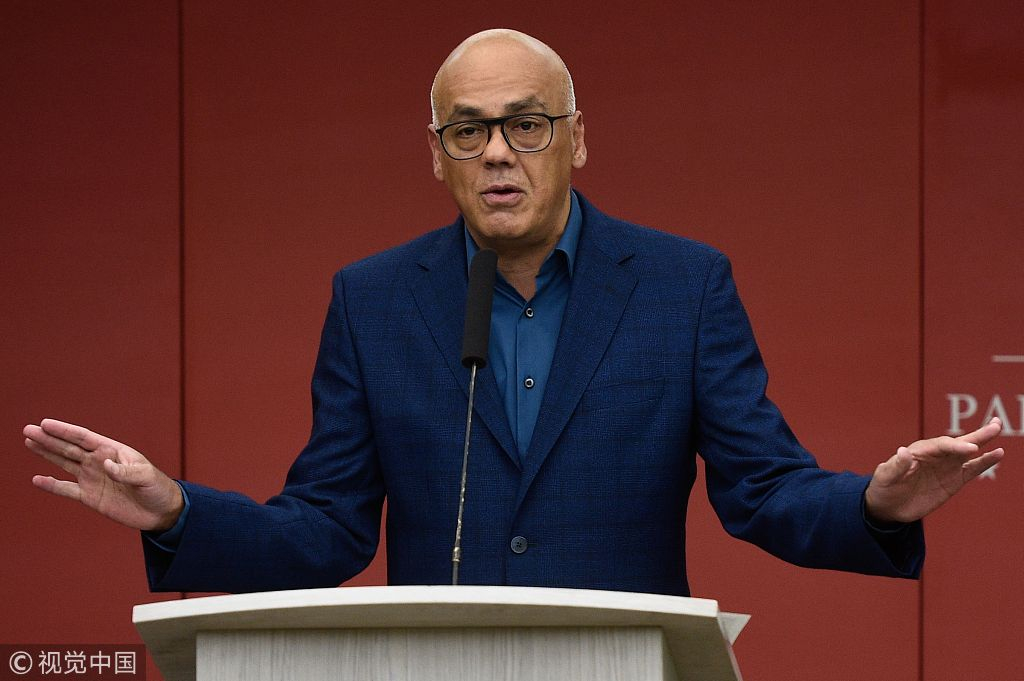 "To achieve consistency in the provision of electricity, the Bolivarian government decided to maintain the suspension of school activities and establish a workday until 2:00 pm in public and private institutions," Communications Minister Jorge Rodriguez said on state television.
With no electricity, pumping stations can't work so water service is limited. Street lights and traffic lights go dark, pumps at fuel stations stand idle, and cell phone and internet service is non-existent.
Demonstrations by Venezuelans angry about the blackouts broke out Sunday in Caracas.
Joaquin Rodriguez, a 54-year-old lawyer, was among the protesters gathered in Los Palos Grandes, a once-prosperous neighborhood that has endured blackouts for more than a decade.
"Once again a nationwide blackout is affecting our quality of life," he told AFP. 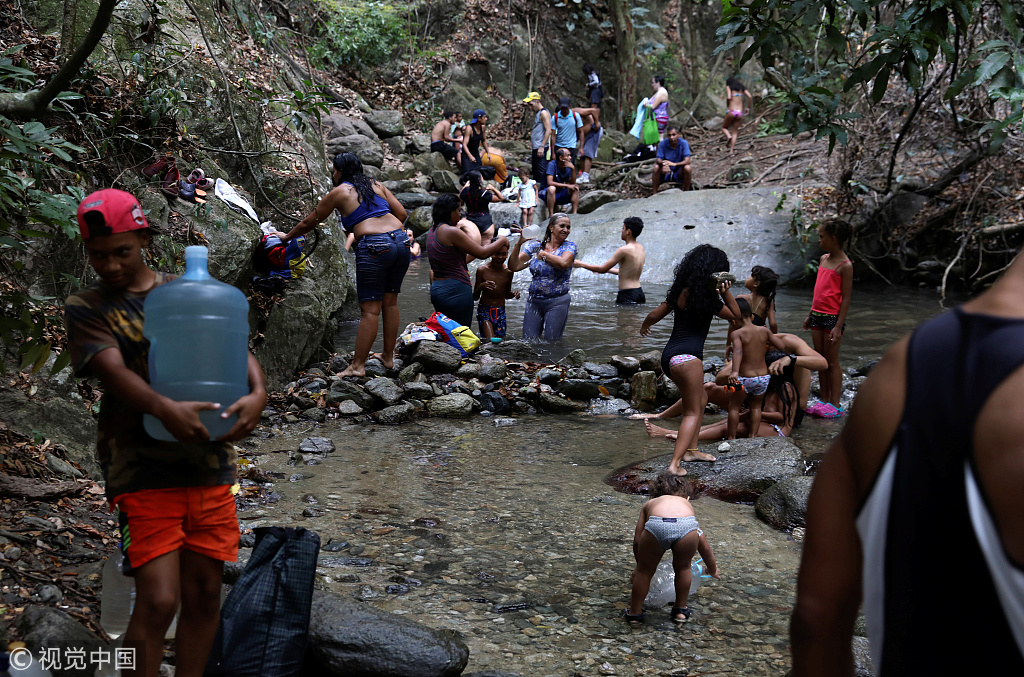 People wash clothes and shower with water from a river in Caracas, March 31, 2019. /VCG Photo

People wash clothes and shower with water from a river in Caracas, March 31, 2019. /VCG Photo

"We don't have water, we don't have any light, we don't have internet access, our phones don't work... we are even worse off than we could have imagined."
"This is going to continue, the situation is very serious, there will be more blackouts and rationing," said Winton Cabas, president of the Venezuelan Association of Electrical and Mechanical Engineering.
"The whole power grid is barely generating between 5,500 and 6,000 megawatts, when it has the capacity to generate 34,000 megawatts," he told AFP.

The Maduro government has blamed "terrorists" for alleged attacks that have damaged the Guri hydroelectric power plant, which generates 80 percent of the country's electricity.
The Guri plant, however, was already showing signs of trouble: back in 2010, then-president Hugo Chavez said that electricity would be rationed in some Venezuelan states because water was low at the Guri dam due to a drought. 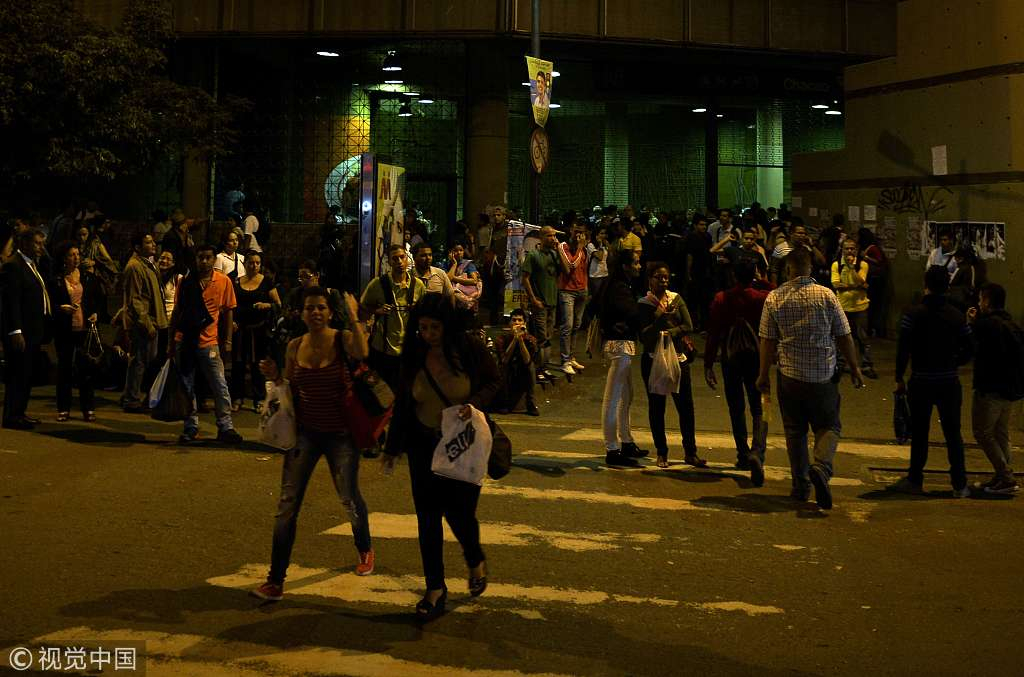 People stand outside a subway station during a general blackout in Caracas, December 2, 2013. /VCG Photo

People stand outside a subway station during a general blackout in Caracas, December 2, 2013. /VCG Photo

Jose Aguilar, a Venezuelan consultant living in the United States, says that the problems with the power grid run deep.
"Over the past 20 years, the infrastructure has been abused due to a lack of maintenance and the postponing of upgrade plans," he told AFP.
The blackouts have worsened the dire economic and living conditions in a country that is witnessing a political showdown between Maduro and opposition leader Juan Guaido, recognized as interim president by the United States and some 50 other countries.
(Cover image: Venezuelan nationals living in Bogota protest against the continuing power outage back in Venezuela, in Bogota, Colombia, March 11, 2019. /VCG Photo)
Source(s): AFP