Ban Ki-moon: World must work together for a sustainable future
By John Goodrich 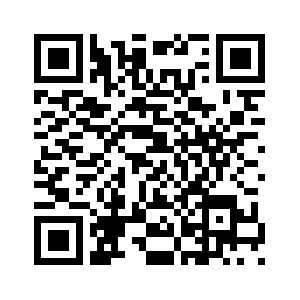 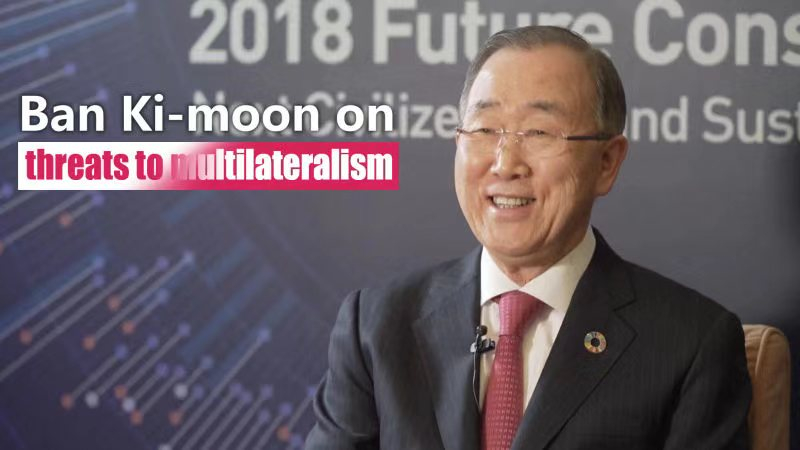 Ban Ki-moon has warned that the multilateral system is under threat and the world must pull together to achieve a sustainable future in the face of growing environmental challenges.
Read more:
Ban: Timing right to strike Korean Peninsula deal
In a wide-ranging interview with CGTN in Beijing, the former secretary-general of the United Nations (UN) expressed hope that the US would return to a multilateralist track, called for firmer commitments to the UN's Sustainable Development Goals, and made a stark warning about the threat of climate change.

Ban cautioned that the US decision to withdraw from a series of global pacts under President Donald Trump had had a "very negative impact to ongoing multilateralism." 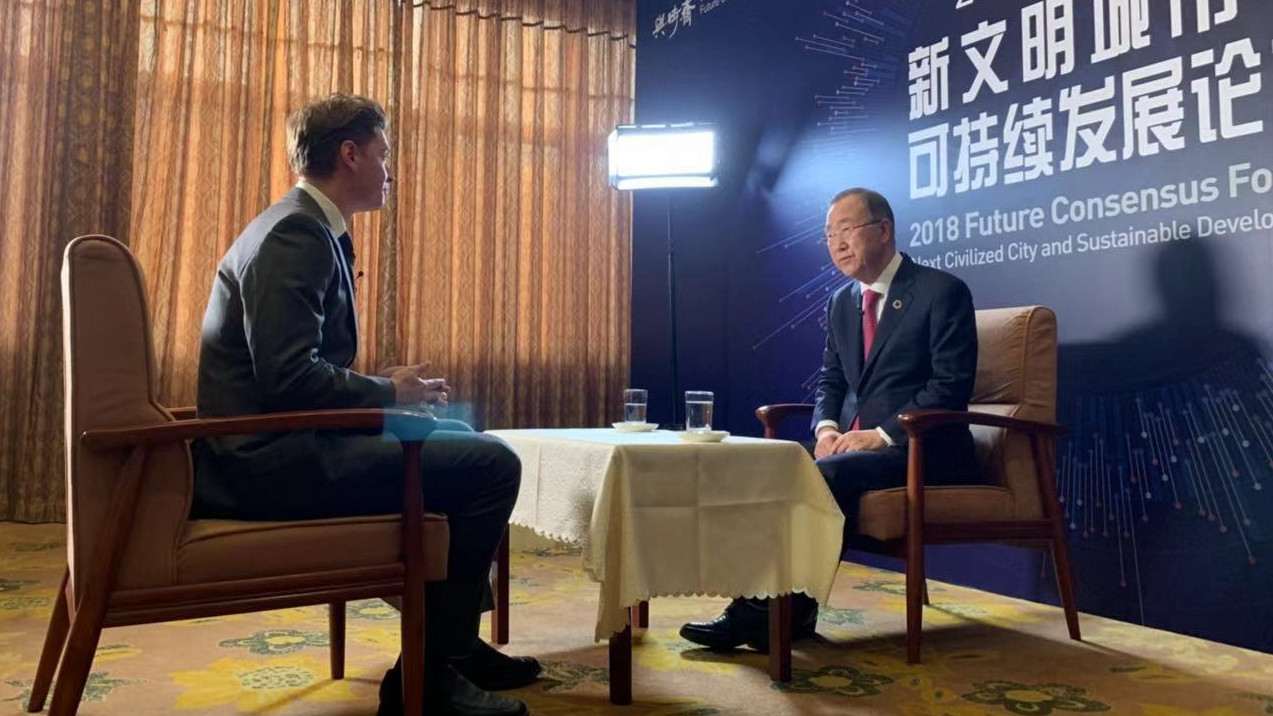 The unilateral trend risked shrinking global trade and freedom of movement, the 74-year-old warned, saying that there was a particular challenge "when big and well-to-do countries like the United States and some European countries are taking 'their nation first' policies, short-term goals instead of building bridges among the people."
"I sincerely hope that we will be able to return the United States to multilateralism," he added.
Ban, now chairman of the Boao Forum for Asia and heading, stressed that global challenges could only be met with global solutions.
00:48 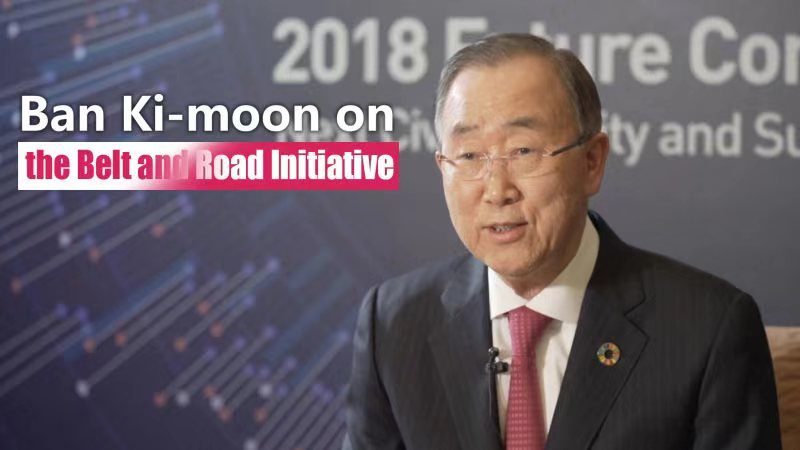 He praised the Belt and Road Initiative as a good example of how China is ready to share economic benefits with the developing world. "I sincerely hope that this kind of vision, which was initiated by President Xi Jinping at the United Nations, creating a community of shared future, will be emulated by many other countries in the world."

The Paris climate deal was agreed during Ban's time at the UN, and the health of the planet is an issue he speaks about with a mix of passion and urgency.
"Unless we take action now, we'll have to face very tragic consequences for humanity and our planet Earth," was his stark warning.
A recent report by the Intergovernmental Panel on Climate Change stated that unless global temperature rises were kept below 1.5 degrees Celsius "we have no hope," he added.
02:25 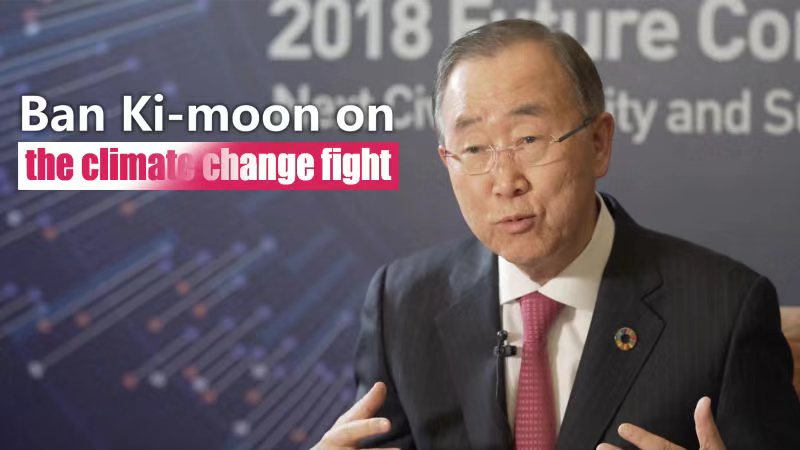 "Climate change, a global challenge, must be addressed by global support and global solutions, working together. We are losing time, climate change is much, much faster."
Ban said the US withdrawal from the Paris climate deal was "deeply disappointing," but added that he was encouraged by the groundswell of support from US states and businesses to keep to the agreement's principles.
"I am very much encouraged, and I am sure the US will return one day soon, very soon. They cannot go alone." 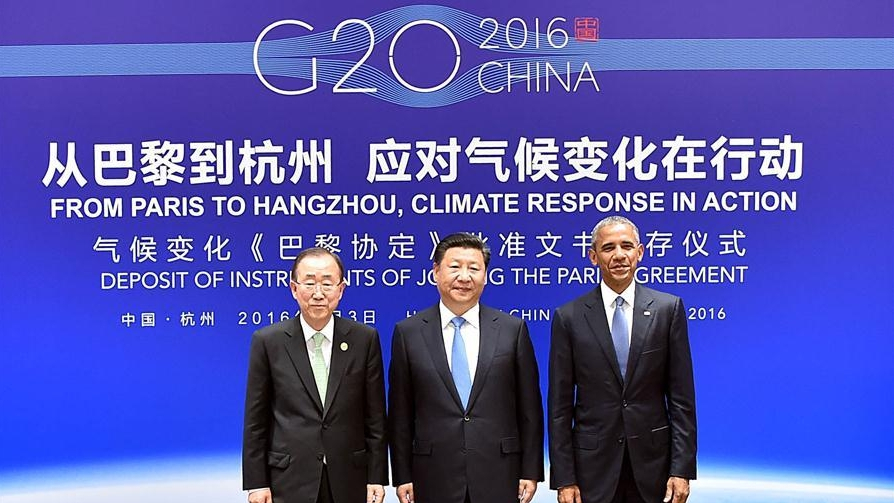 Ban also praised the actions of Chinese President Xi Jinping and former US president Barack Obama in jointly presenting the Paris climate agreement instrument of ratification at the G20 Summit in Hangzhou in 2016.
He said that with their "strong commitment and leadership we were able to make this Paris agreement effective in the fastest way possible in the history of the United Nations."

Ban believes the trend away from multilateralism, which is at odds with the basic values of the UN, can be countered in part by doing more to foster a sense of global citizenship.
"There are many global challenges. Those challenges can be answered and can be solved through global solutions. There's not a single country or individual, however powerful, however resourceful one may be, can do it alone. We have to do it together. We are all in this together.
"Unfortunately during my 10 years of service at the United Nations I have seen many national leaders, but not many global leaders in a true sense. That is why we need to foster, particularly among young people who could be responsible for our future, that they should become global citizens. There is not much importance in national boundaries." 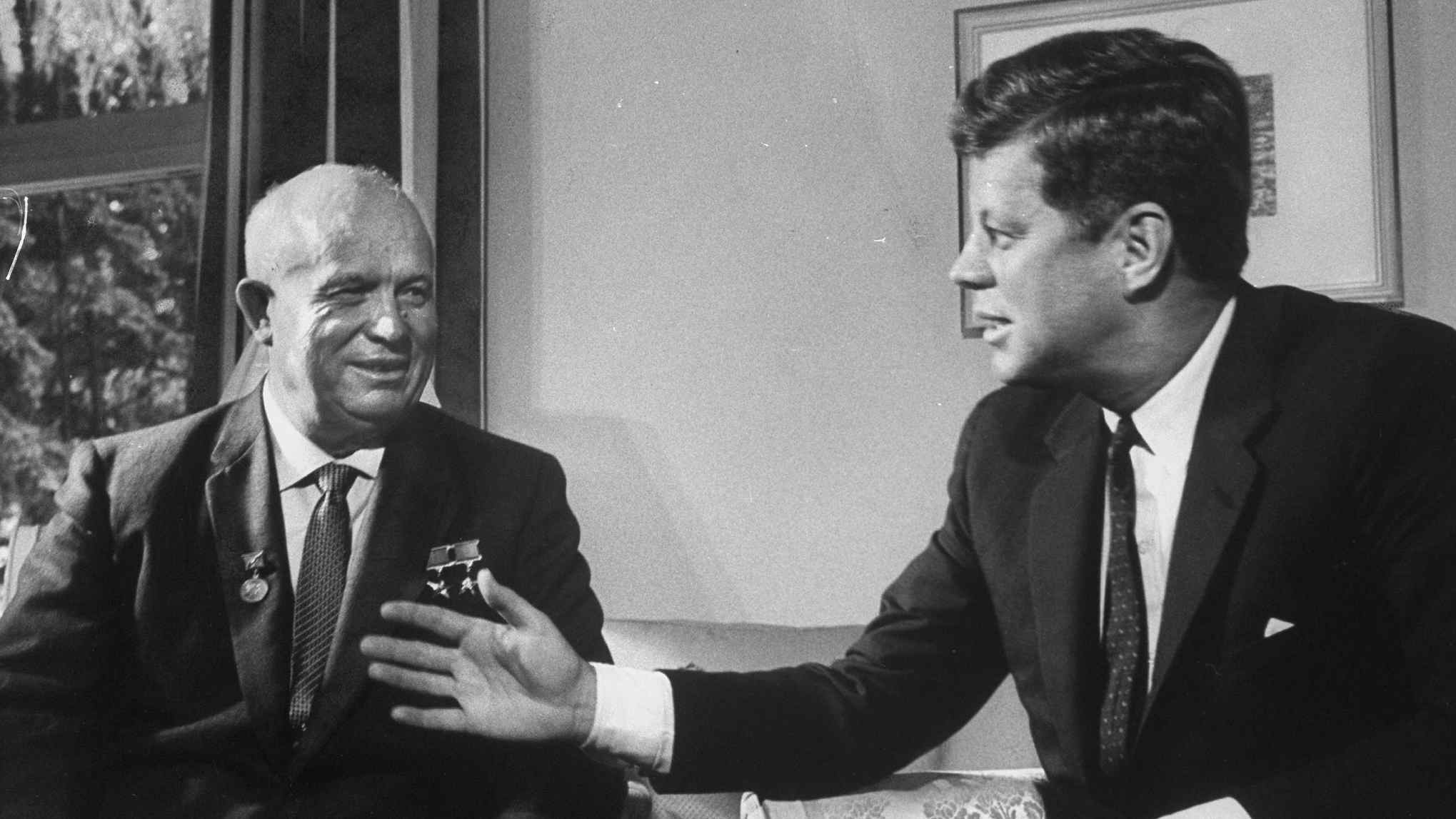 Recalling a meeting with John F. Kennedy in 1962 when, as a boy, Ban traveled to the US, he said had been inspired into public service when the then president spoke to him.
It was the height of the Cold War and world leaders were not communicating effectively, but Kennedy told Ban "you young people can do it, and there is not much meaning in national boundaries, the question is whether you are ready to extend helping hands."

A major achievement of Ban's time at the helm of the UN was the adoption of the 2030 Agenda for Sustainable Development.
The 17 Sustainable Development Goals are now the core of the Ban Ki-moon Center for Global Citizens, an organization designed to foster a sense of global community and responsibility.
01:18 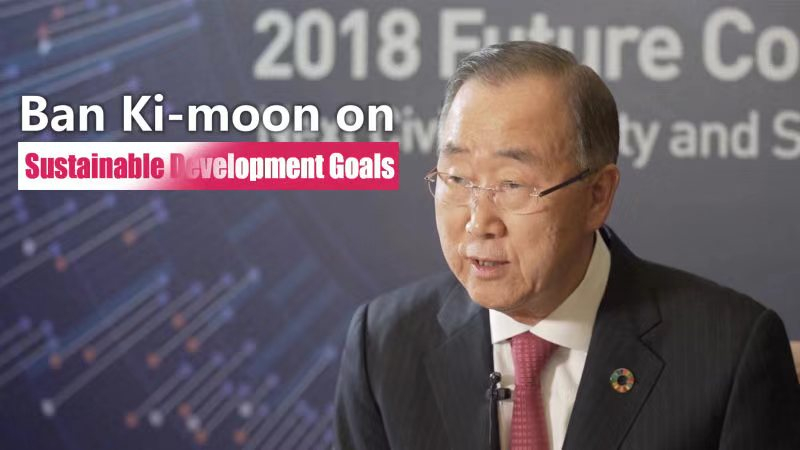 The SDGs were "by far the most ambitious and by far the most far-reaching visions the United Nations has ever presented to the world," Ban said.
Ban remained positive about the prospects for the SDGs, but said he was "a bit concerned about the lack of firm commitment by the government leaders and the business leaders."
"Each and every sustainable development goal really has great implications for our humanity and the sustainability of our world. And that is why I have really been urging political leaders to take these SDGs as sole ownership, by each and every government."

Ban was visiting the Chinese capital to talk about the 11th Sustainable Development Goal－sustainable cities and communities－at the 2018 Future Consensus Forum.
Read more:
China is a key player in creating the next civilized city
The former diplomat said that with 70 percent of the global population forecast to be living in cities by 2050 and 70 percent of energy consumption and greenhouse gas emissions being emitted in mega cities, achieving a sustainable model for the future was essential. 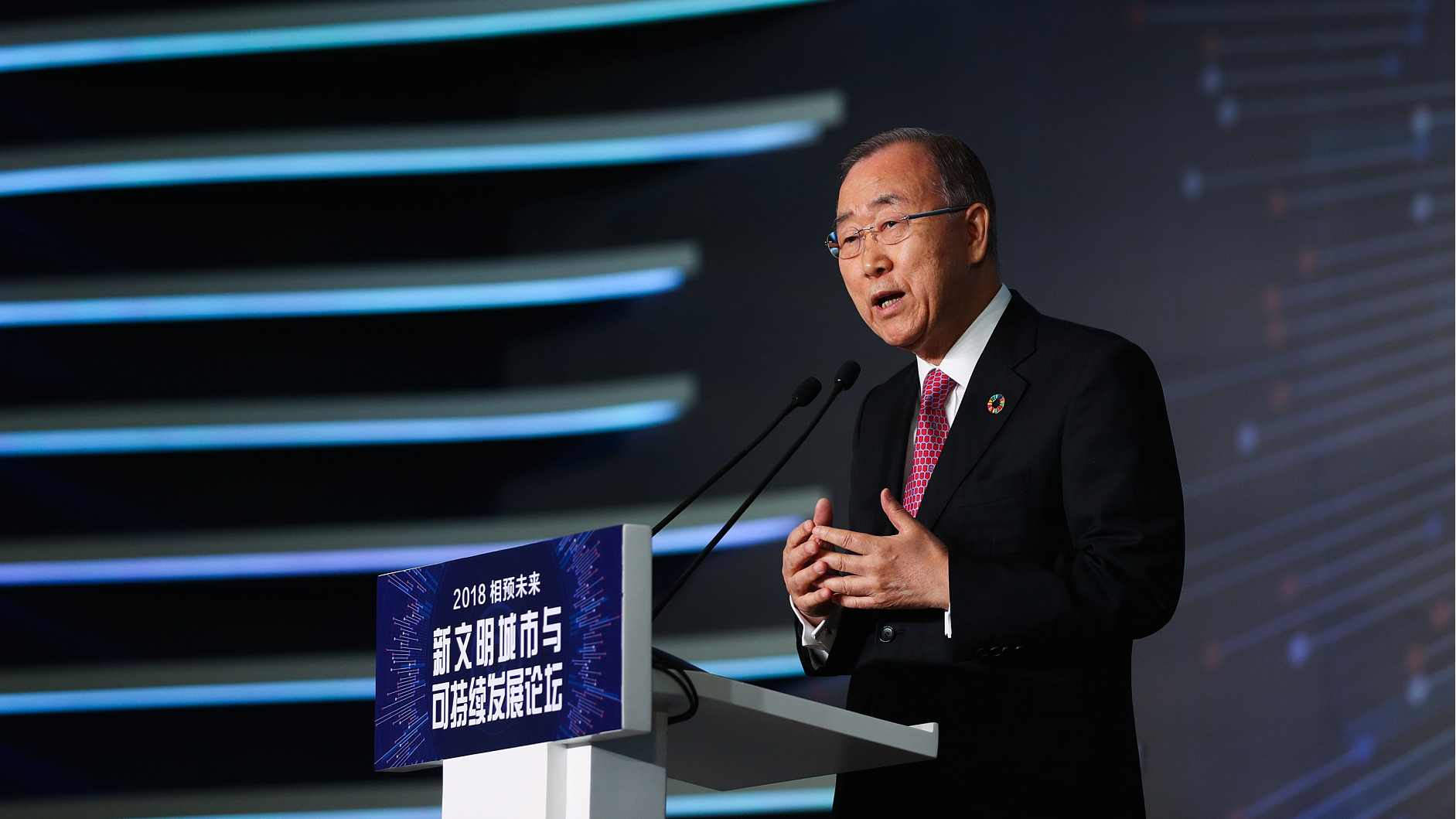 "Cities should be the place we can enjoy affluent society and prosperity, good access to medical and educational facilities. At the same time we need to make sure the inhabitants of the cities change their consumption and production patterns. That will be a key to meeting the target of climate change and meeting the target of sustainable development goals."
Countering climate change and embracing global citizenship are messages Ban is taking around the world in his post-UN life, and he sees the SDGs as vital.
"If we are able to implement these 17 targets by 2030 I'm sure the world will be much, much better off for all the people."
(Video Editor: Huang Yichang)