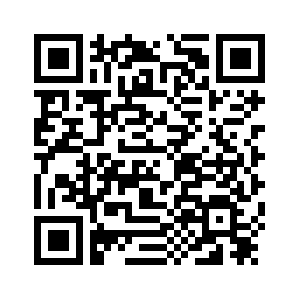 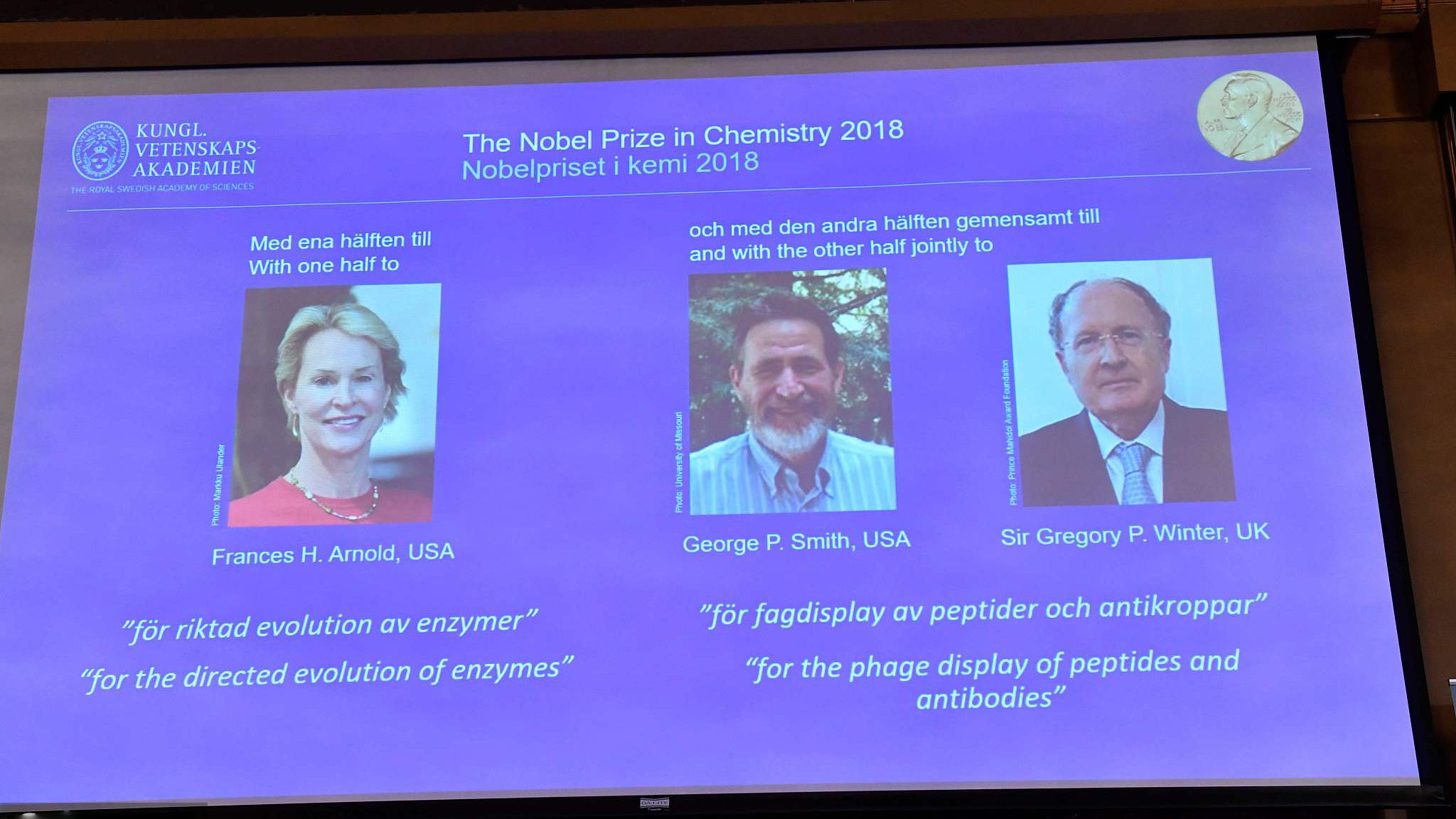 The 2018 Nobel Prize in Chemistry has been awarded to Frances H. Arnold and George P. Smith of the US, and Sir Gregory P. Winter of the UK, the Royal Swedish Academy of Sciences announced on Wednesday.
"This year's Chemistry Laureates have taken control of evolution and used the same principles – genetic change and selection – to develop proteins that solve humankind's chemical problems," the award-giving body said. 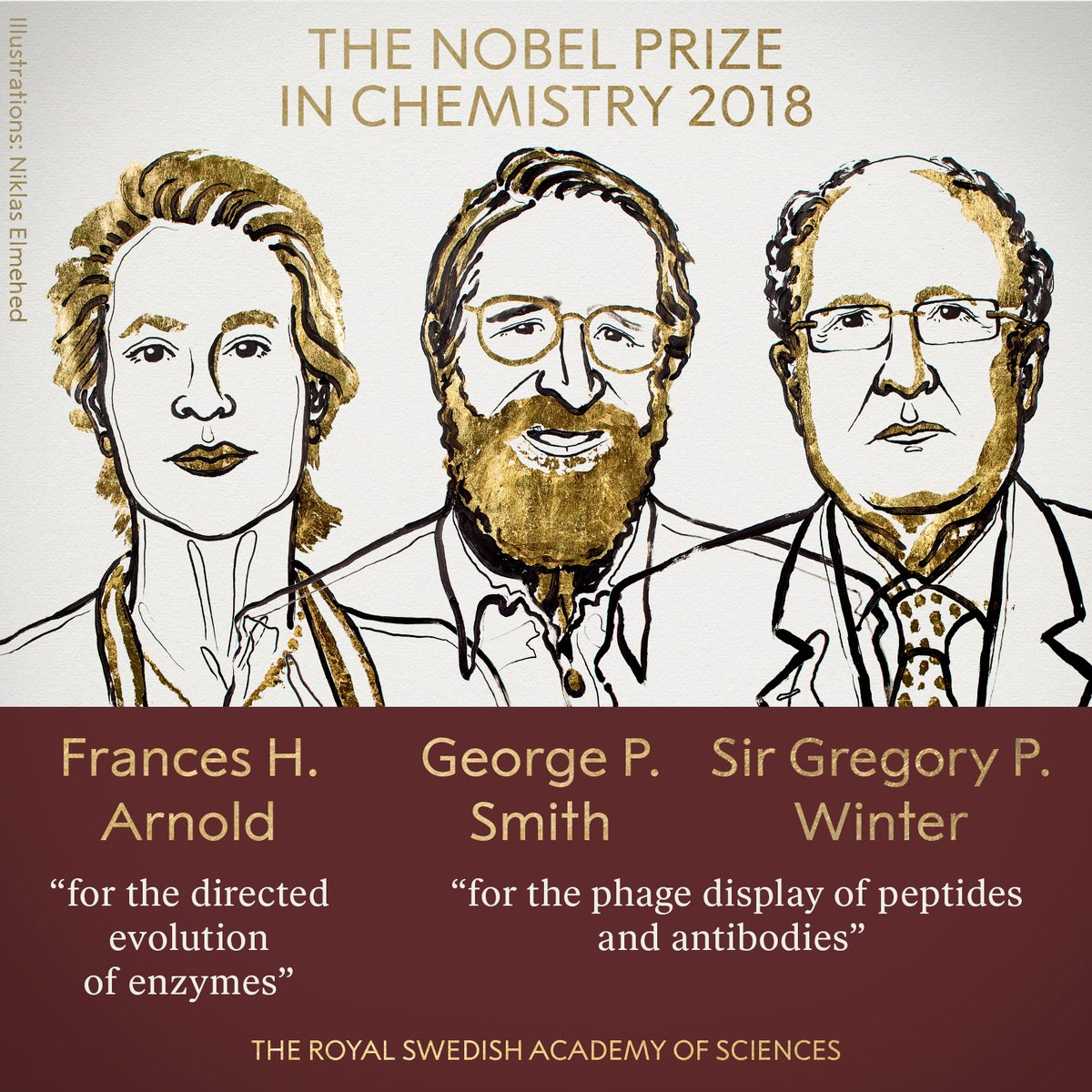 Laureates of the 2018 Nobel Prize in Chemistry. /Twitter Screenshot

Laureates of the 2018 Nobel Prize in Chemistry. /Twitter Screenshot

Watch the replay of CGTN's live stream of the Academy's announcement.

In simple words, the three Nobel Chemistry laureates this year have created "safer, greener" ways to provide solutions to humankind with "better efficiency and fewer side effects."

The similarity between the three laureates is that they all managed to select some important chemical microbes for directed evolution.
Frances H. Arnold at Caltech in the US, the receiver of one half of this year's Nobel Chemistry Prize, conducted the first directed evolution of enzymes – proteins that catalyze chemical reactions – in 1993, and has since then refined the methods, which are now routinely used to develop new catalysts. 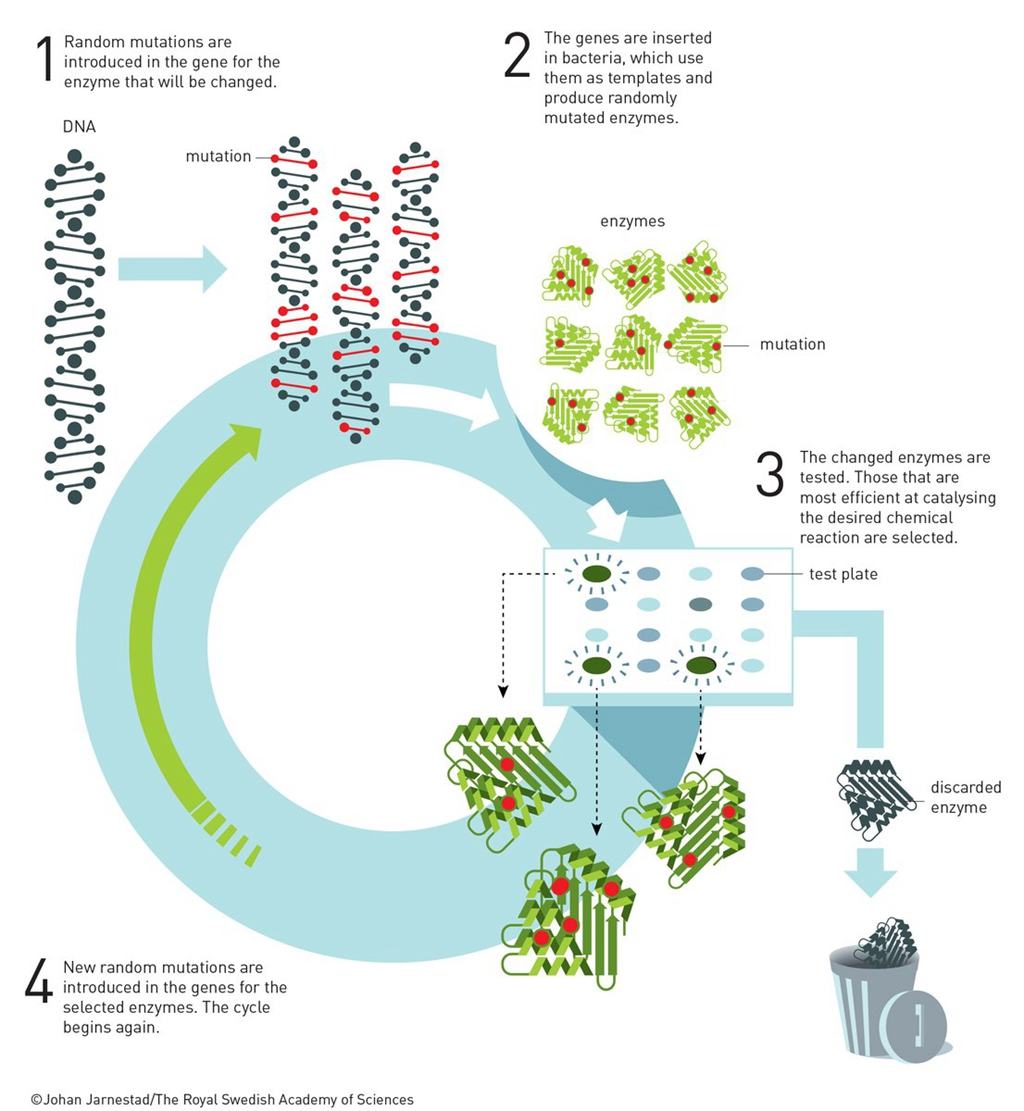 Her findings are not only useful to create "more environmentally friendly manufacturing" of pharmaceuticals, but also can be applied to the production of "renewable fuels for a greener transport sector." 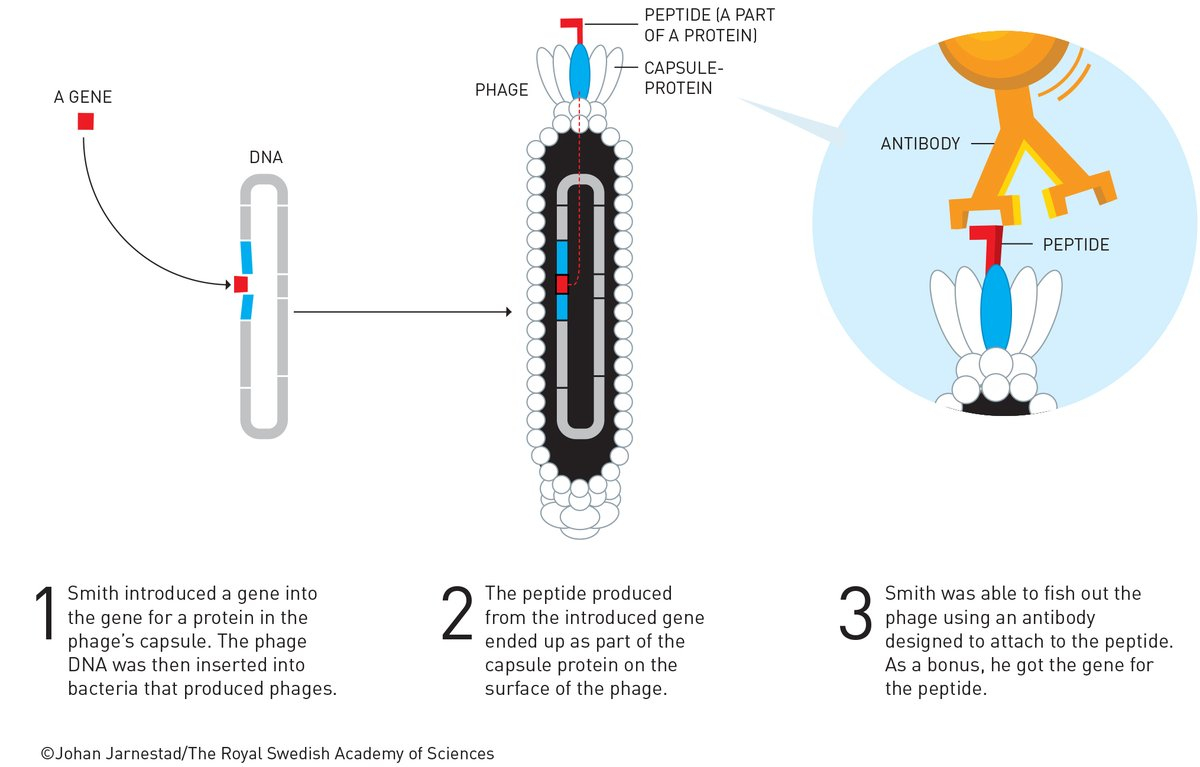 As for the other half, it was shared by George P. Smith at the University of Missouri in the US, and Sir Gregory P. Winter, a British scientist from the Medical Research Council Laboratory of Molecular Biology.
In 1985, George Smith developed a phage display, where a bacteriophage – a virus that infects bacteria – can be used to evolve new proteins. Gregory Winter used that display to direct evolution of antibodies and to develop new drugs. 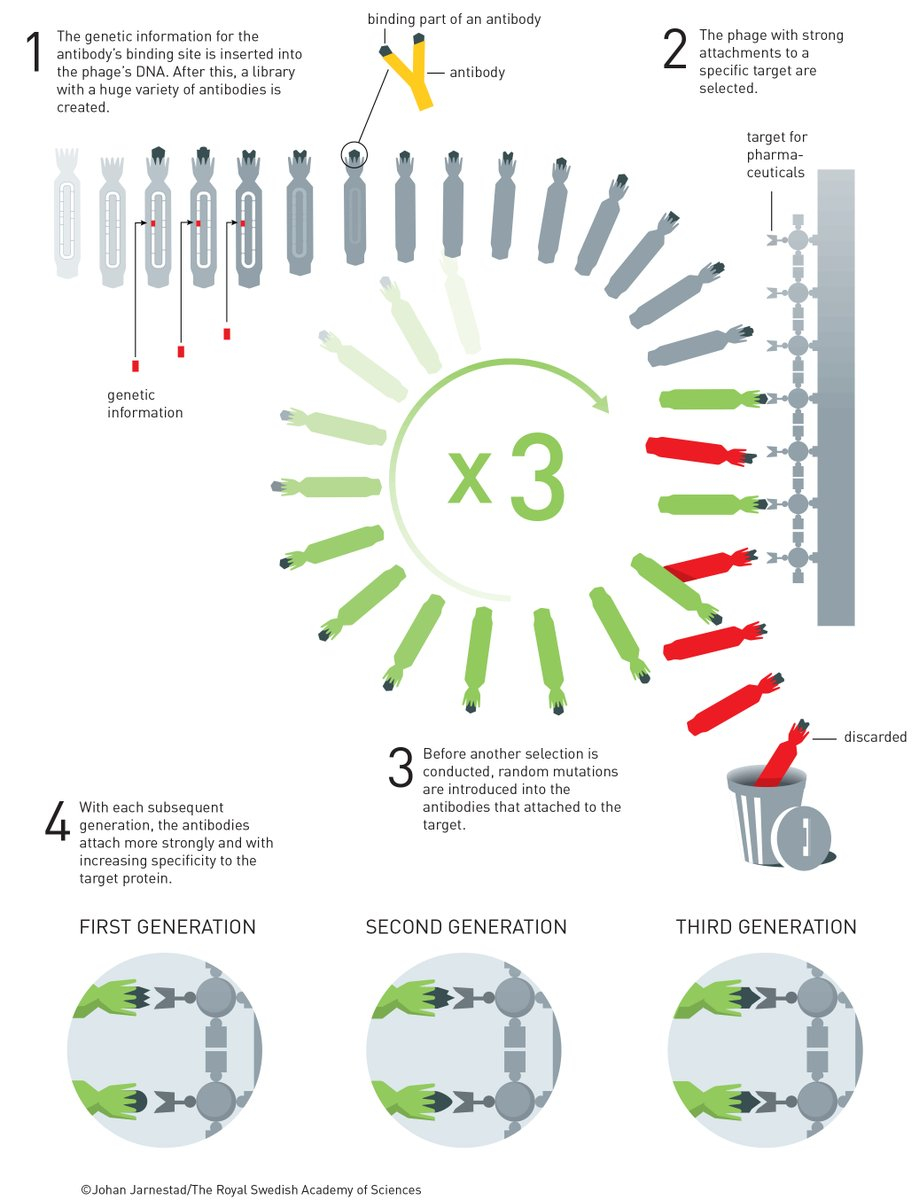 Today, phage display has produced antibodies that can "neutralize toxins, counteract autoimmune diseases and cure metastatic cancer."
During the Q&A session, when asked about a "tendency" toward medicine-related science breakthrough, the award-giving body said that was not out of any intention, noting the founder, Alfred Nobel's wish to award "brilliant science with consequences."
Because of some line problems, the phone interview with Professor Arnold was not clear enough to get useful information. We'll need to wait until the prize giving ceremony this December to know further detail.

Through 1901 to 2017, the Nobel Prize in Chemistry was awarded 109 times to 177 laureates from around the world for their great achievements.
However, many may forget the fact that the founder of the Nobel Prizes, Alfred Nobel, was also a chemist. 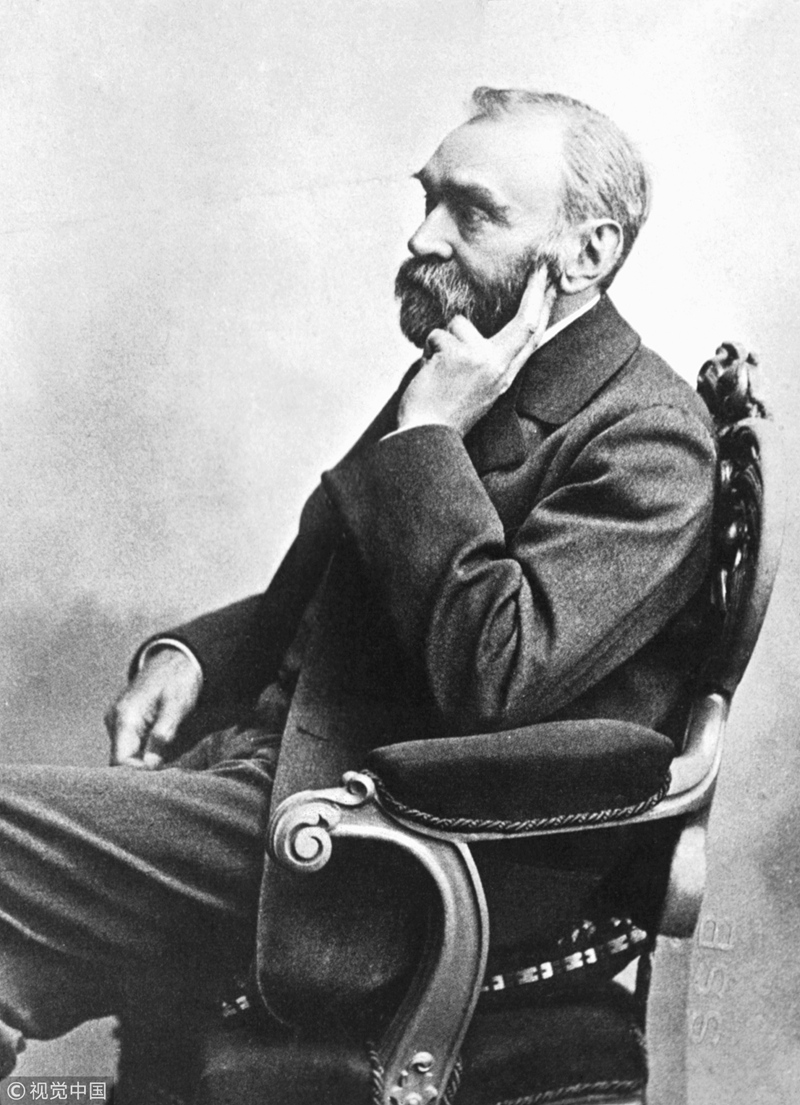 Alfred Nobel (1833-1896) the Swedish chemist and engineer who invented dynamite and bequeathed his fortune to institute the Nobel Prizes. /VCG Photo

Alfred Nobel (1833-1896) the Swedish chemist and engineer who invented dynamite and bequeathed his fortune to institute the Nobel Prizes. /VCG Photo