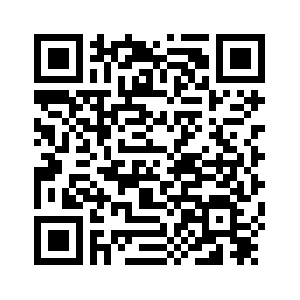 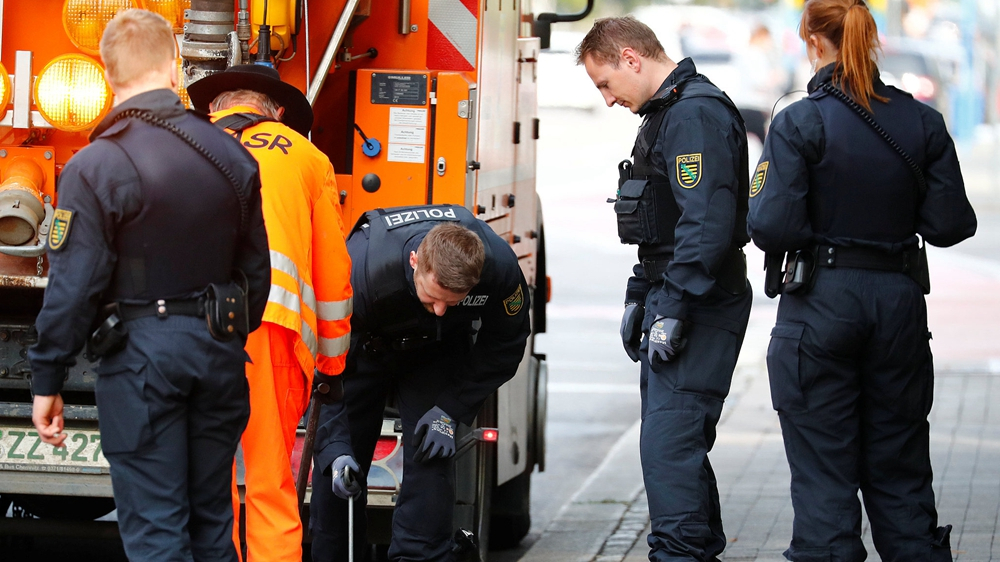 Chemnitz is on edge after a wave of racist violence following the deadly stabbing of a local man, allegedly by two migrants, stoking tension and tarnishing the eastern German city's image.
"We aren't all Nazis," sighs 60-year old pharmacist Rita Thal.
"Everything people are seeing and hearing about Chemnitz, it doesn't reflect reality," she says while queuing outside the city's football stadium where Michael Kretschmer, head of the eastern state of Saxony, was to hold a town hall-style meeting.
Although the event had long been in the diary, it took on a new urgency after a week in which black-clad far-right demonstrators attacked foreigners and clash with police and counter-protesters. 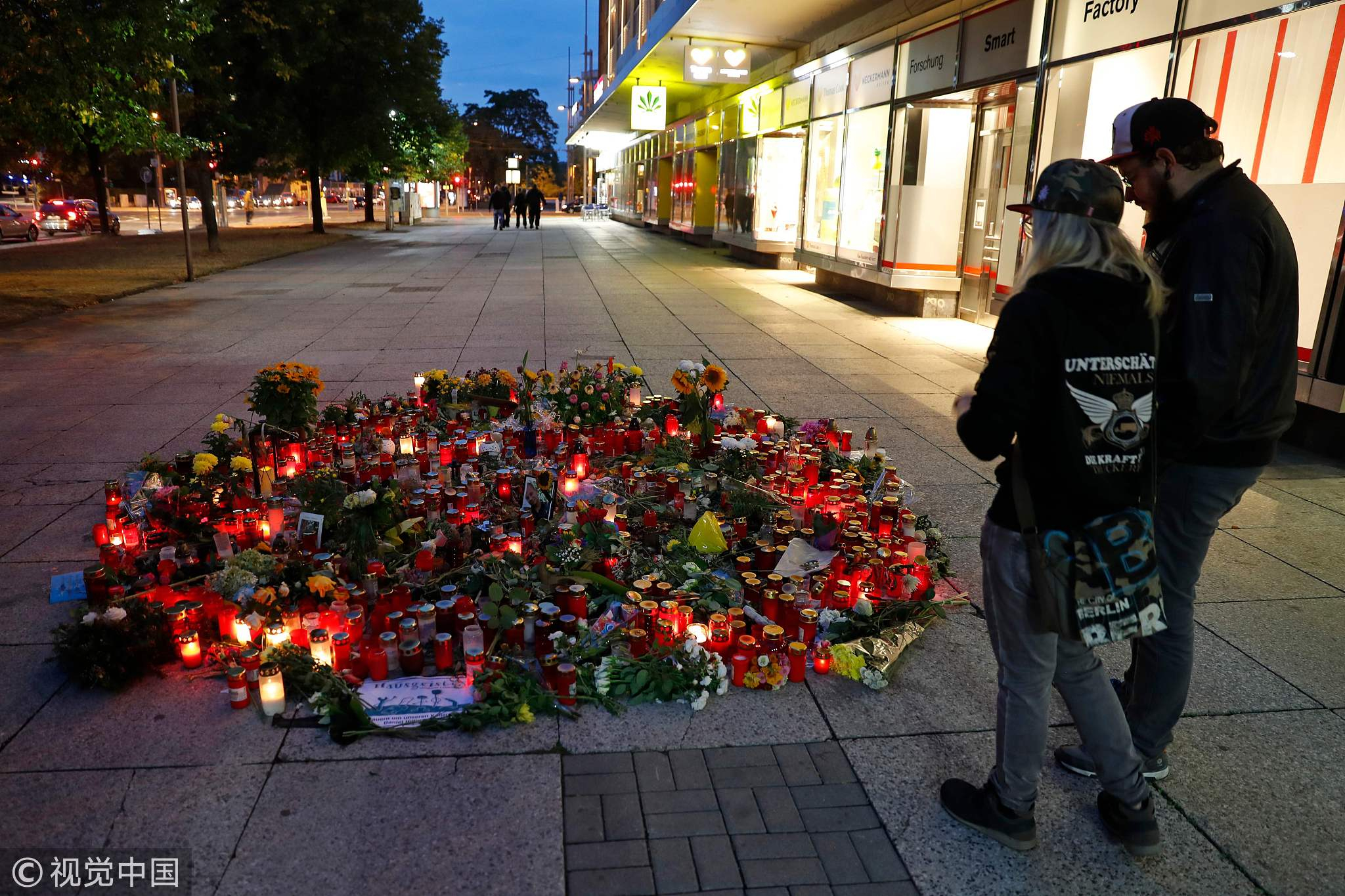 People visit the makeshift memorial of candles and flowers for the victim of the fatal stabbing in Chemnitz, August 30, 2018. /VCG Photo

People visit the makeshift memorial of candles and flowers for the victim of the fatal stabbing in Chemnitz, August 30, 2018. /VCG Photo

Around 500 people packed into a stuffy hall inside the grounds to hear Kretschmer, while outside, another 800 or so gathered for a demonstration organized by Pro Chemnitz – a radical rightwing movement with three seats on the city council.
Distant cries of "Get out!" directed at the state premier filter through the windows and the mood inside is tense.
In Chemnitz, like in many other towns and cities, there is a simmering anger over crimes committed by migrants which have been given a high profile in the media, stoking concern about the integration of more than one million people who have arrived since 2015.
Sunday's stabbing is just the latest incident, but in Chemnitz they are demanding answers.
'Not a brown town'

People use the flashlights on their phones as they take part in a protest in Chemnitz, August 30, 2018. /VCG Photo

People use the flashlights on their phones as they take part in a protest in Chemnitz, August 30, 2018. /VCG Photo

As mayor Barbara Ludwig of the center-left Social Democratic Party (SPD) takes to the stage, she bears the brunt of the anger, with a chorus of booing interrupting her speech as she struggles to make herself heard.
"In Chemnitz, we're wavering between love and hate," she declares.
Kretschmer also seeks to reassure the crowd.
"This is not a far-right town, this town is not brown," he insisted, referring to the traditional color of fascism and the Nazi party.
Nevertheless, he acknowledged that images of the mob giving Hitler salutes with their right arm outstretched in front of police too few in number to stop them, have been seen "around the world" on television and social media. 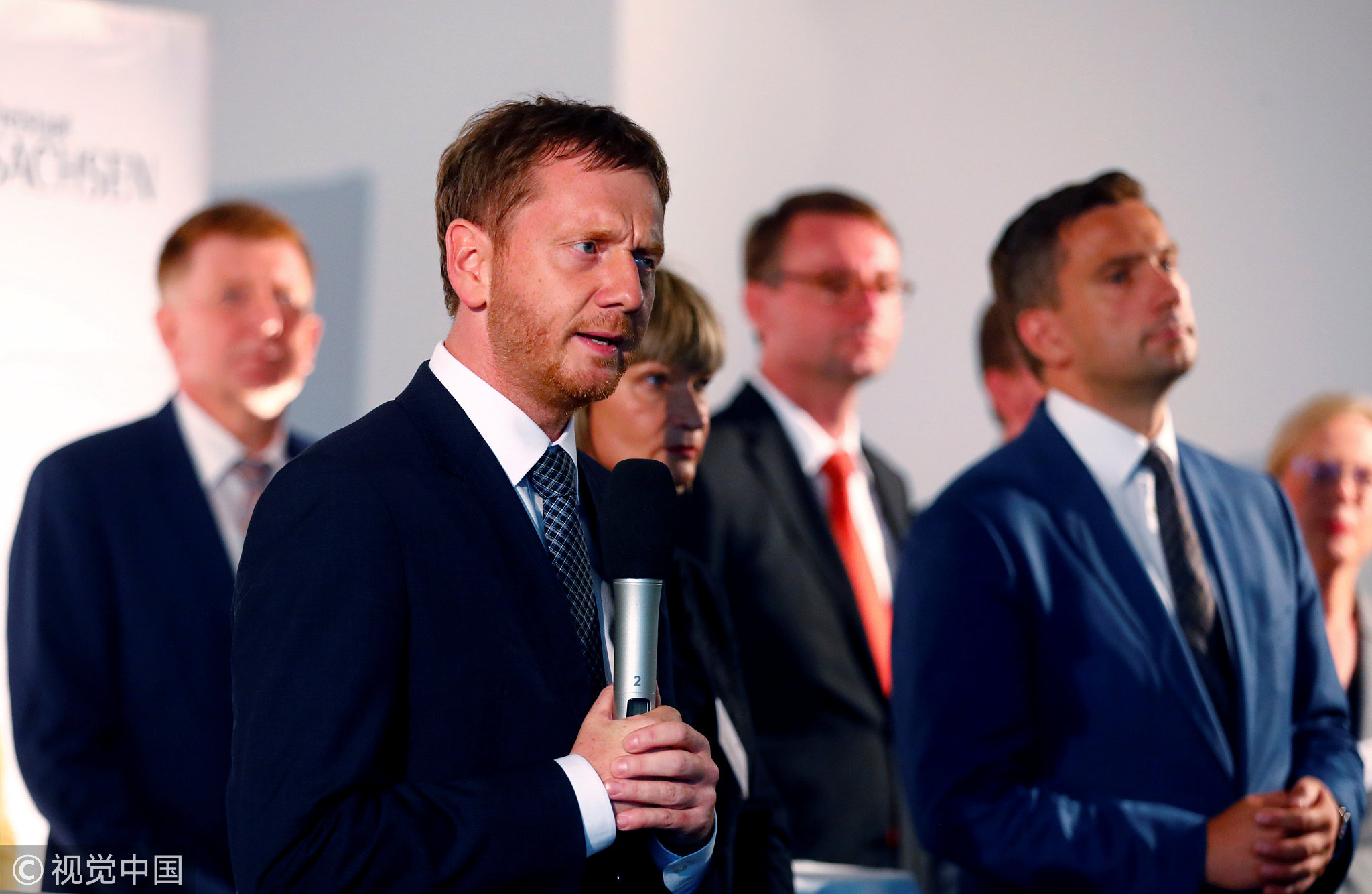 But for local residents, security remains the top concern.
"There's a feeling of lurking fear, especially among older people, stoked by the far right," explains Sabine Kuehnrich, who runs a grassroots movement for democracy and tolerance.
For Birgit Menzel, a 59-year-old insurance saleswoman also at the gathering, it's not clear why people are afraid.
"Foreigners? We don't have many of them here," she says.
Only around seven percent of Chemnitz's population of 246,000 is foreign-born, a figure which is relatively low compared to Frankfurt or Munich where the percentage is above 25 percent.
But a man standing nearby interrupts her.
"You're talking nonsense. People are afraid, and they're right to be. I don't let my 13-year-old daughter go into town by herself," the shaven-headed 40-something says angrily.
"How can you say foreigners aren't a problem? Haven't you read about what's happened?" he demands.
Another woman nods in agreement.
"If the victim had been your child, you wouldn't be reacting like this!"
(Cover: Police officers check street gullies close to the crime scene where a German man was stabbed in Chemnitz, August 31, 2018. /VCG Photo)
Source(s): AFP