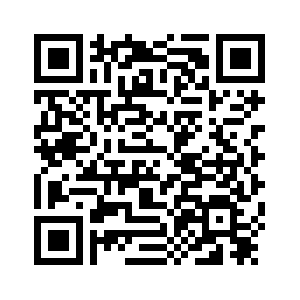 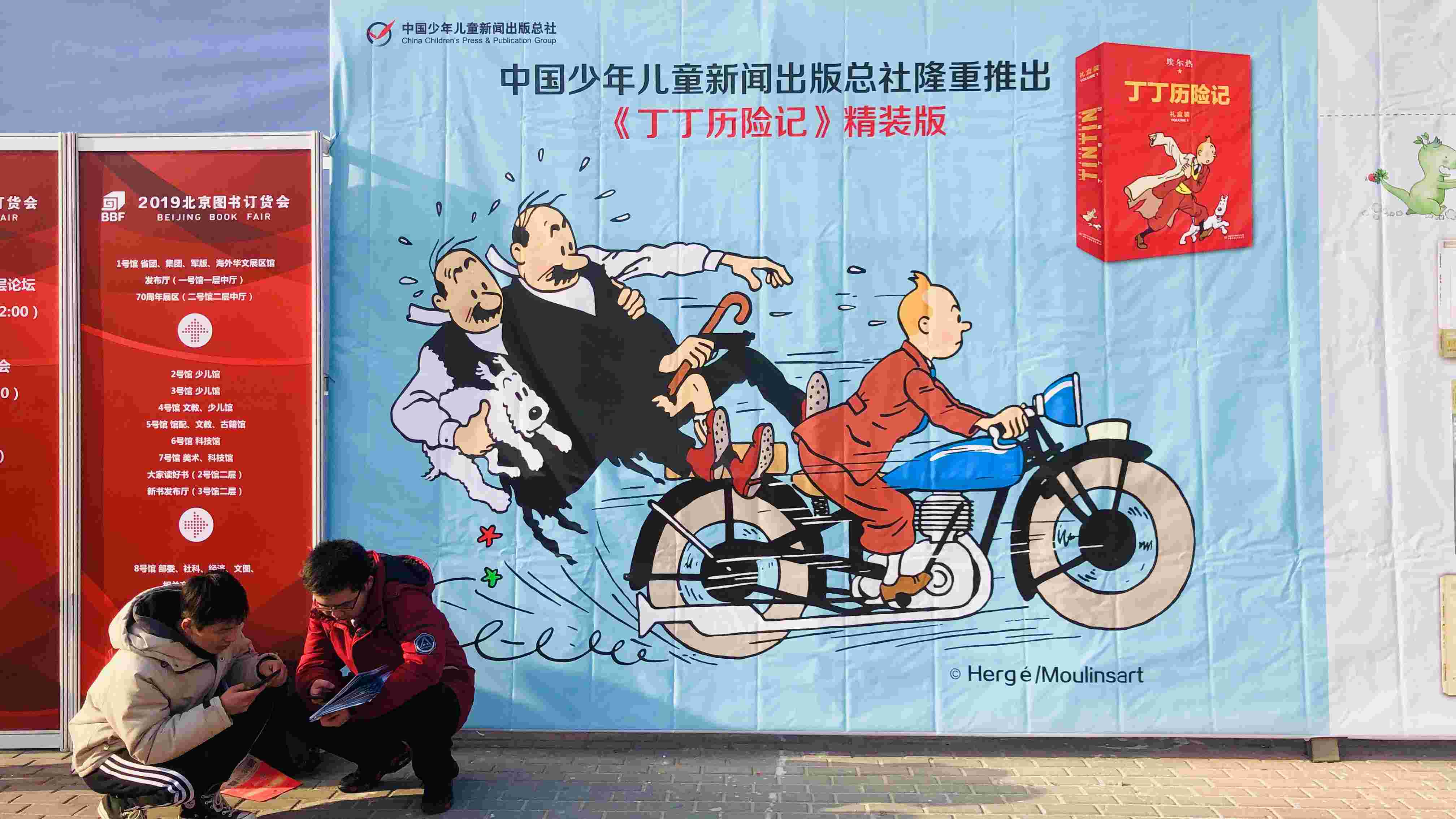 Ninety years ago, on January 10, 1929, Tintin made his first public appearance in the pages of the Belgian weekly Le Petit Vingtieme.
Today, the adventures of the intrepid reporter with the recognizable quiff and his dog Snowy are a beloved institution.
Almost every child in France, Belgium or Switzerland grows up having read at least one of the stories. The comic books – known as "bandes-dessinées" (BDs) in French – can be found in every bookshop, library and hundreds of thousands of homes.
But Tintin's success is not limited to the French-speaking world. The books have been translated into over 120 languages and dialects – from Bahasa to Arabic, Hungarian, Icelandic, Afrikaans and even Latin. An animated TV series in the 1990s aired around the world. Steven Spielberg made a movie adaptation in 2011. And shops selling Tintin memorabilia can be found in Singapore, Iran, Turkey and even Sudan.

Amid this worldwide fervor, one connection stands out: Tintin's link to China.
The 1936 album "The Blue Lotus" – which sees the hero traveling to Shanghai, where he breaks up an opium-smuggling ring, with Japan's invasion of China as a backdrop – is still one of author Hergé's most beloved and critically acclaimed works. 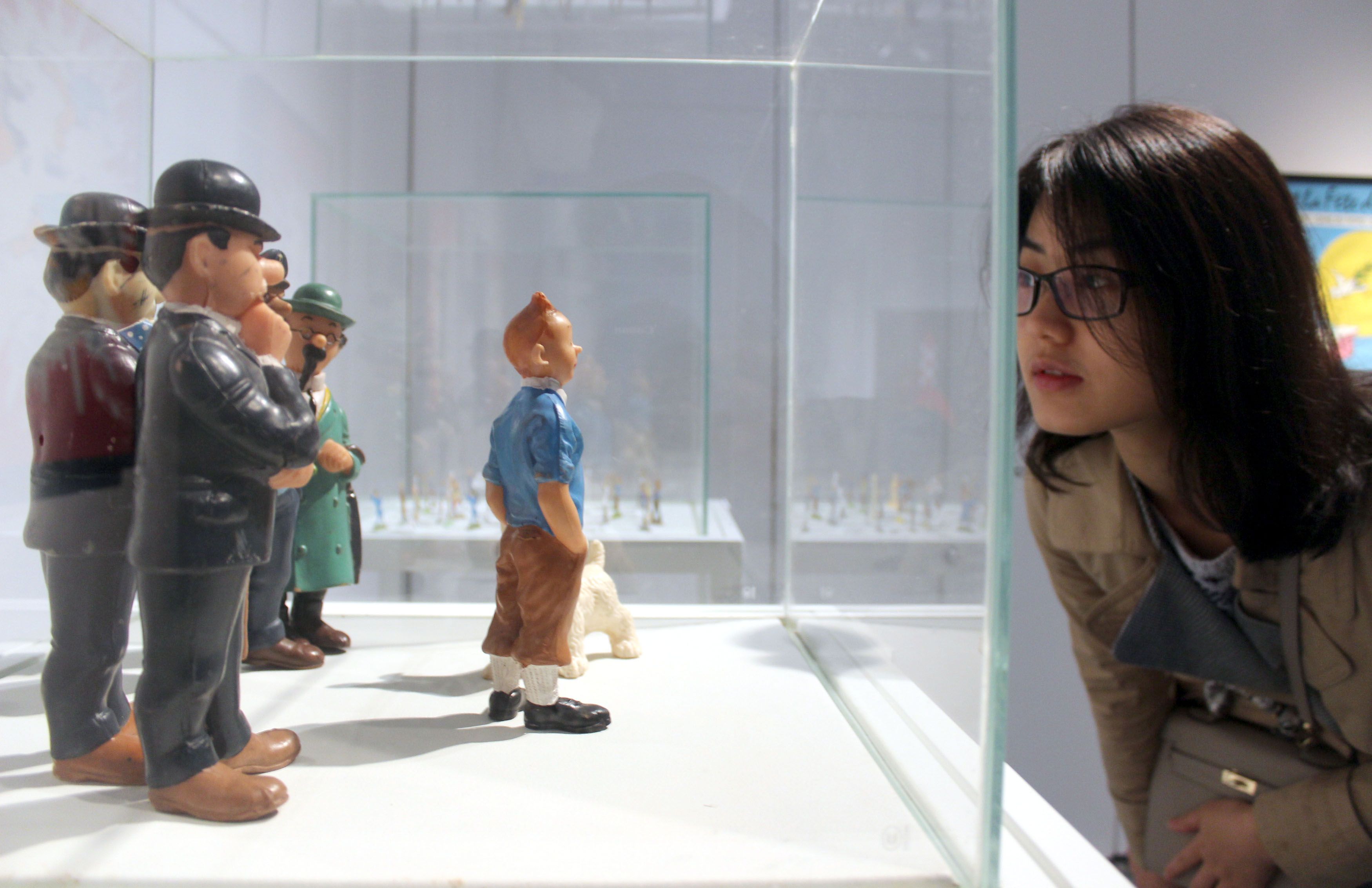 The author, whose real name was Georges Remi (his pen name Hergé comes the French pronunciation of his initials when reversed: RG), also modeled one of the book's characters, Chang, after a real-life Chinese friend of his.
Today, Tintin – or 丁丁 (Dīngdīng) in Mandarin – is big business in China: out of the three to four million albums sold worldwide every year, 1.5 million are sold in China, according to Casterman, the long-time publishers of Tintin books and other BDs.
In total 250 million copies have been sold around the world since the first book was published in 1931.

Officially, Tintin was not even published in the Chinese mainland until 2001. But readers were already familiar with his adventures by then thanks to pirated copies which, ironically, helped build a following before the books were even widely available.
Chinese readers in their 40s and 50s today still remember the excitement of discovering far-flung destinations as Tintin fought gangsters in Chicago, traipsed through the desert somewhere in the Middle East, faced execution squads in Latin America, and even traveled to the moon. 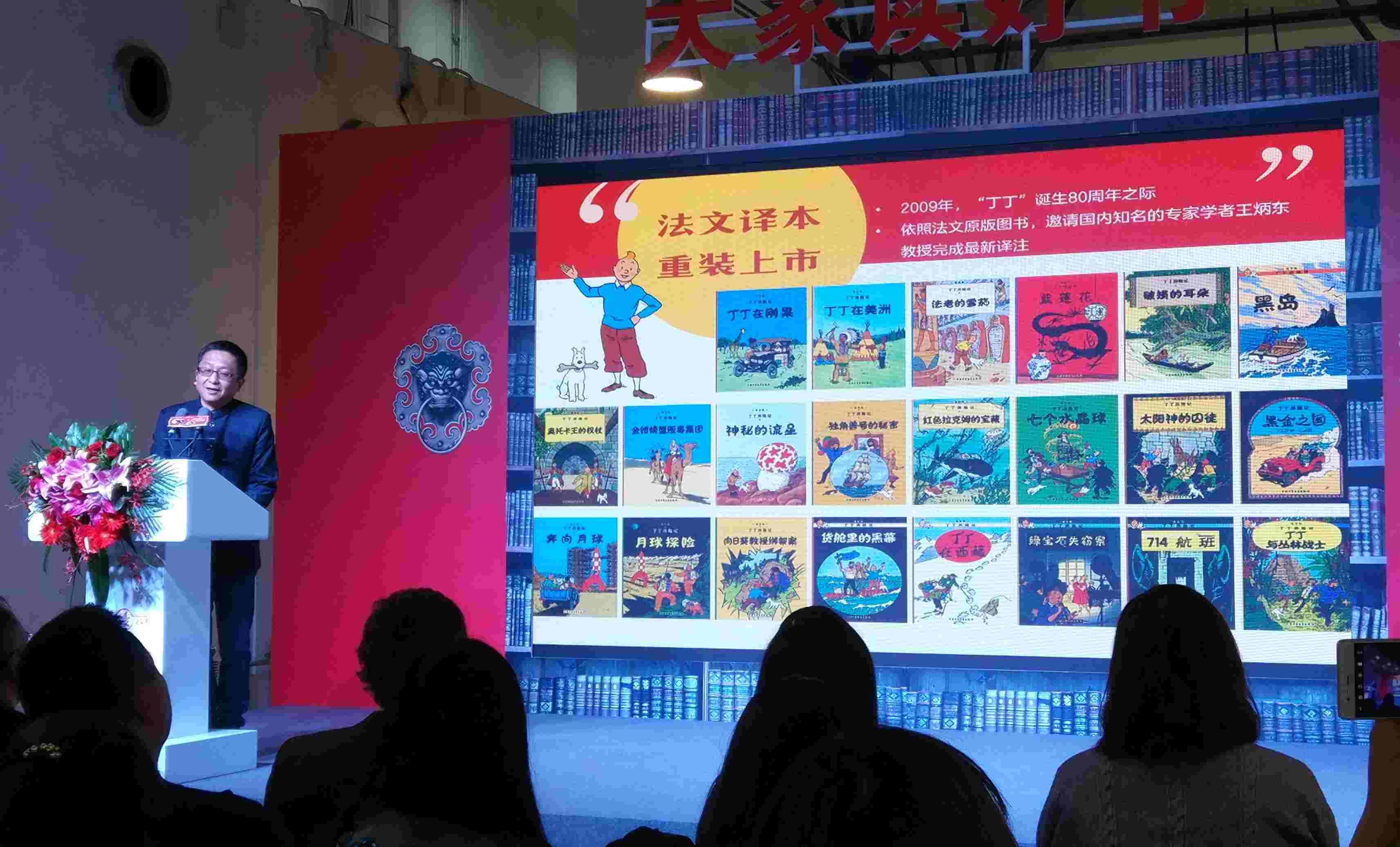 "In the 1980s, Chinese people could not get out of China. So Tintin opened for us a window onto the entire world. Young boys traveled with Tintin in the books," Philippe Wang, China representative for Moulinsart, the company in charge of promoting Hergé's work, told CGTN.
"Tintin created a world of other countries for the Chinese. And that was extraordinary."
Who's who?
When first published in China, Tintin was adapted from the English version, itself already a translation. Only in 2009 were the books translated again, this time from the original French.
As a result, Chinese readers know the characters under different names: Tintin's dog Snowy – Milou in French – is known as both 白雪 (White Snow) and 米卢 (Mǐ lú). The disaster-prone detective twins have been called both 汤姆森 and 汤普森 (Thomson and Thompson) and 杜邦 and 杜庞 (Dupont and Dupond). Tintin however has always been 丁丁.

Even as he embarks on risky adventures, Tintin's clean-cut image – an honest, loyal and courageous hero who stands up to the bad guys and will do anything to protect his friends – has made him a model for generations of readers who not only read the books growing up, but are now buying them for their own children and grandchildren. 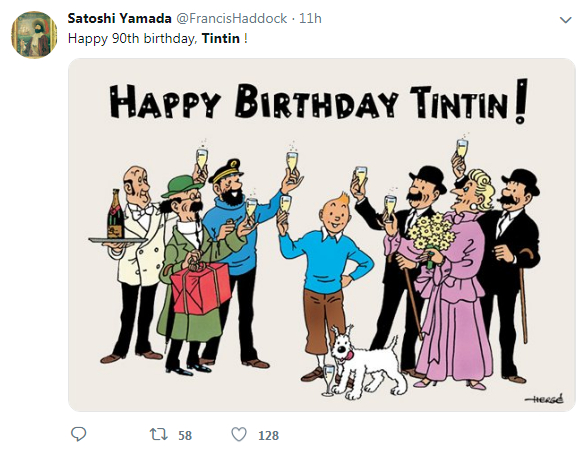 Wang said he had spoken to Chinese readers who didn't even realize that Tintin was Belgian: his round face, his small button nose and the fact that he is pictured wearing Chinese clothing in "The Blue Lotus" made them think he was Chinese, just like them.

Out of the 24 Tintin books, published over a span of over 45 years, "The Blue Lotus" remains for many one of Hergé's masterpieces.
This is in great part due to the author's friendship with a Chinese fine arts student he met in Brussels, Zhang Chongren, who helped shape the story and drew the Chinese calligraphy seen in the album.
"For Hergé, (meeting Zhang) was a shock: a cultural shock, an artistic shock, and from a human point of view, an incredible meeting for a young Belgian who had only traveled in Europe and knew absolutely nothing of the wider world," Dominique Maricq, a Brussels-based Tintin expert, told CGTN.
"Zhang opened the doors of a new world to him," teaching him about "artistic practices that were unknown to him, and a philosophy and worldview that were very different from his own." 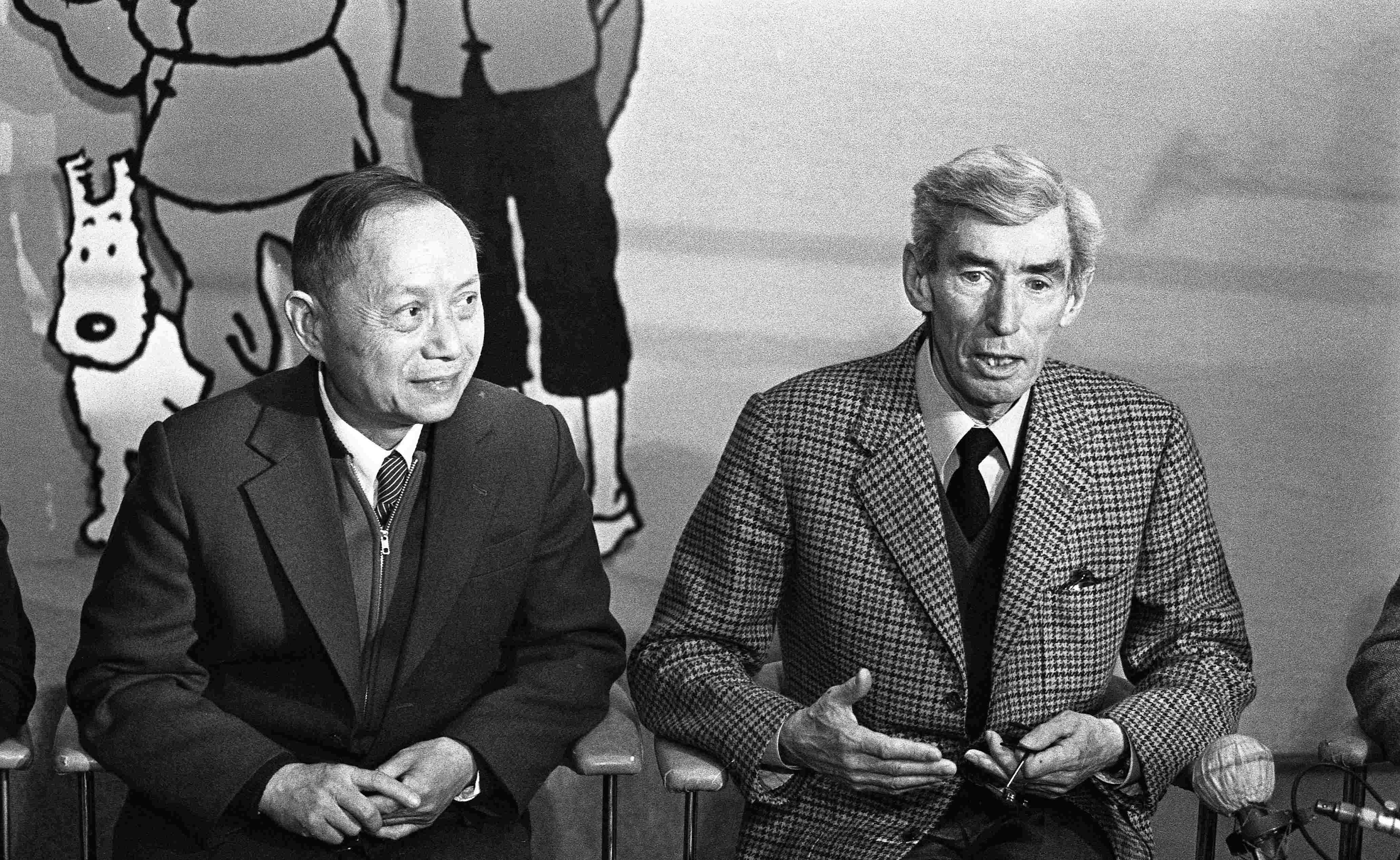 As a result, at a time when Europeans' views of China were rife with prejudice, the album painted an unusually nuanced picture of the Far East, even though the author had never traveled to China.
In a memorable scene when Tintin first meets Chang, the two compare preconceptions about each other's cultures: Chang is surprised all Westerners are not "white devils" like those who killed his grandparents, while Tintin mocks Western clichés of Chinese as cruel men who only eat birds' nests and rotten eggs – "the most beautiful demonstration against xenophobia," according to Maricq.

Zhang Chongren returned to China in the 1930s where he later headed the Fine Arts Academy in Shanghai and acquired some fame, sculpting busts of top Chinese leaders, including Deng Xiaoping, as well as French President François Mitterrand. He went back to Europe in the 1980s and died in France in 1998. A small museum dedicated to his work exists in Shanghai.

"The Blue Lotus" storyline also incorporated actual news events, from Japanese agents blowing up a Chinese railway, to the Imperial Army marching into China and Tokyo pulling out of the League of Nations.
Hergé was keen to document the world around him, according to Wang.
But while the author's stance on the Sino-Japanese War certainly did not hurt the book's success in China, it is not what stands out for Chinese readers.
"For readers today, the first reaction is the friendship between Chang and Tintin. A young European who travels to China in the 1930s and makes a Chinese friend… it's something that impresses Chinese people a lot today."
"The Blue Lotus" remains the most popular Tintin book in China. "It's always in strong demand. They keep having to print and reprint it!" said Wang.
"Readers realize this was an artist who understood China."
(Video credit: Li Jingjing, Li Ningning, Ge Kai)