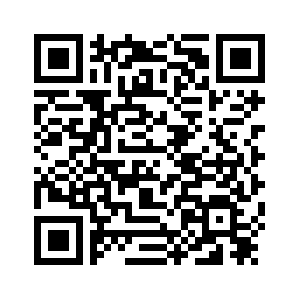 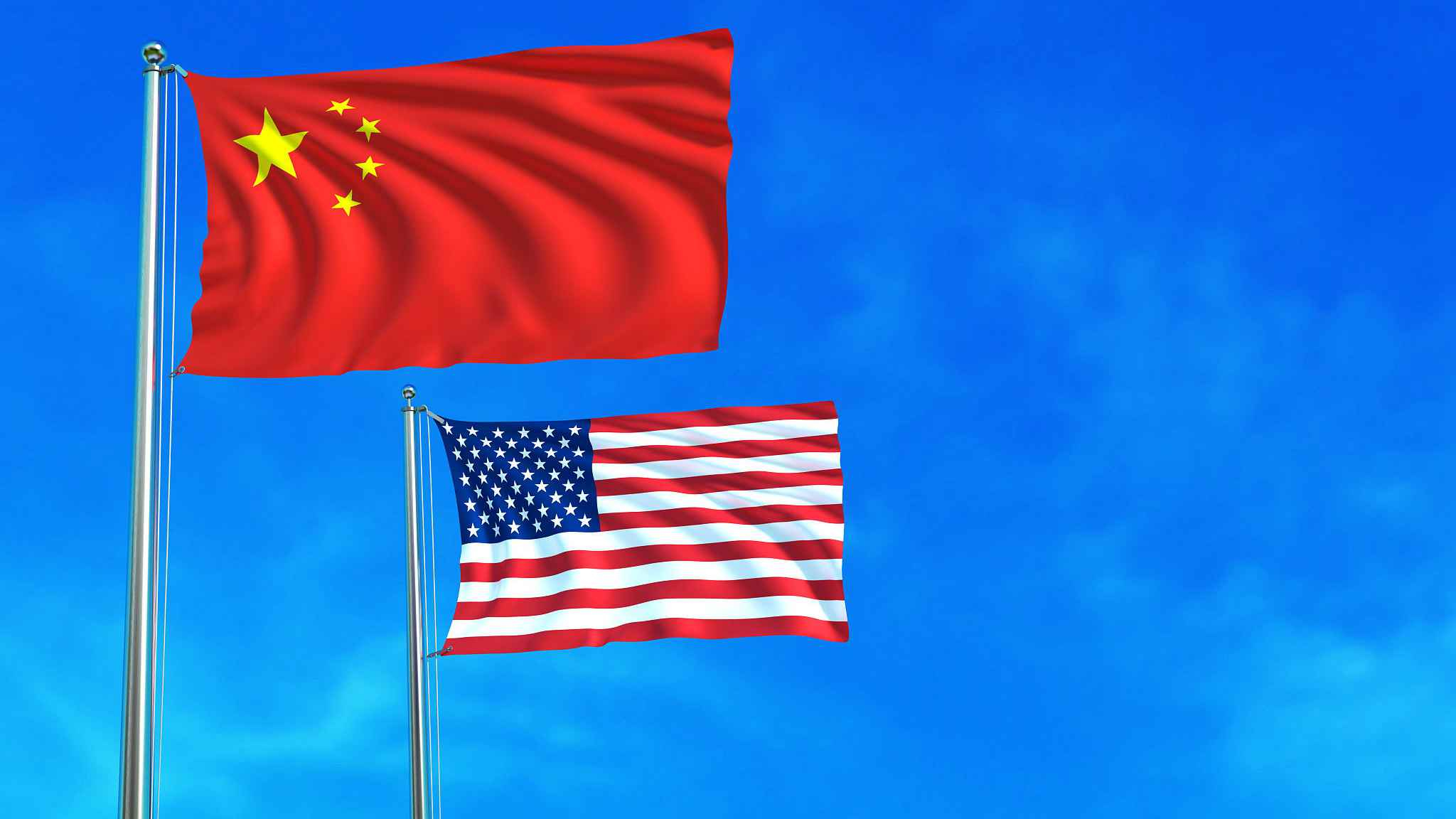 Editor’s note: China and the U.S., the top two world economies, have been inextricably bound with each other for decades. 2019 marks the 40th anniversary of the establishment of diplomatic relations between China and the U.S. The past year was marked by a tit-for-tat trade war between the two countries. How will 2019 unfold for them? Chris Hawke, a graduate of the Columbia Graduate School of Journalism, and a journalist who has worked for over two decades in Beijing, New York, Tokyo, Bangkok, Islamabad and Kabul and at the United Nations for AP, UPI, and CBS, offers his insights to CGTN.
With China and the U.S. in the midst of a wasteful trade war that they can afford to extend indefinitely, it is easy to imagine that the two nations are experiencing a kind of sea change in their relationship.
However, this would overlook how dynamic and deep the relationship is, and how rapidly it has changed.
Forty years ago, China was trying to find its way after the Cultural Revolution. Its reform and opening-up policy was just beginning to take root. The country was scarred and impoverished from the upheavals of the previous decade. Televisions were a rarity, popular music was largely unknown, and Chinese cinema audiences had yet to see an onscreen kiss.
Students were trickling back to domestic universities, which had only recently reopened. People still relied on ration tickets for food, and the state-run economy was a basket case.
In the U.S., the idea of a black president was the stuff of comedy. The hit television show was Three's Company, featuring the risqué gag of a straight man pretending to be gay. Homosexuality was considered a taboo and shameful topic, and same-sex marriage was unimaginable. The new TRS-80 Model II personal computer built in Texas offered a whopping 64 kilobytes of RAM.
Amid this very different world, U.S. President Jimmy Carter extended formal diplomatic recognition to China on January 1, 1979, building on a rapprochement that began with President Richard Nixon's visit to China in 1972. 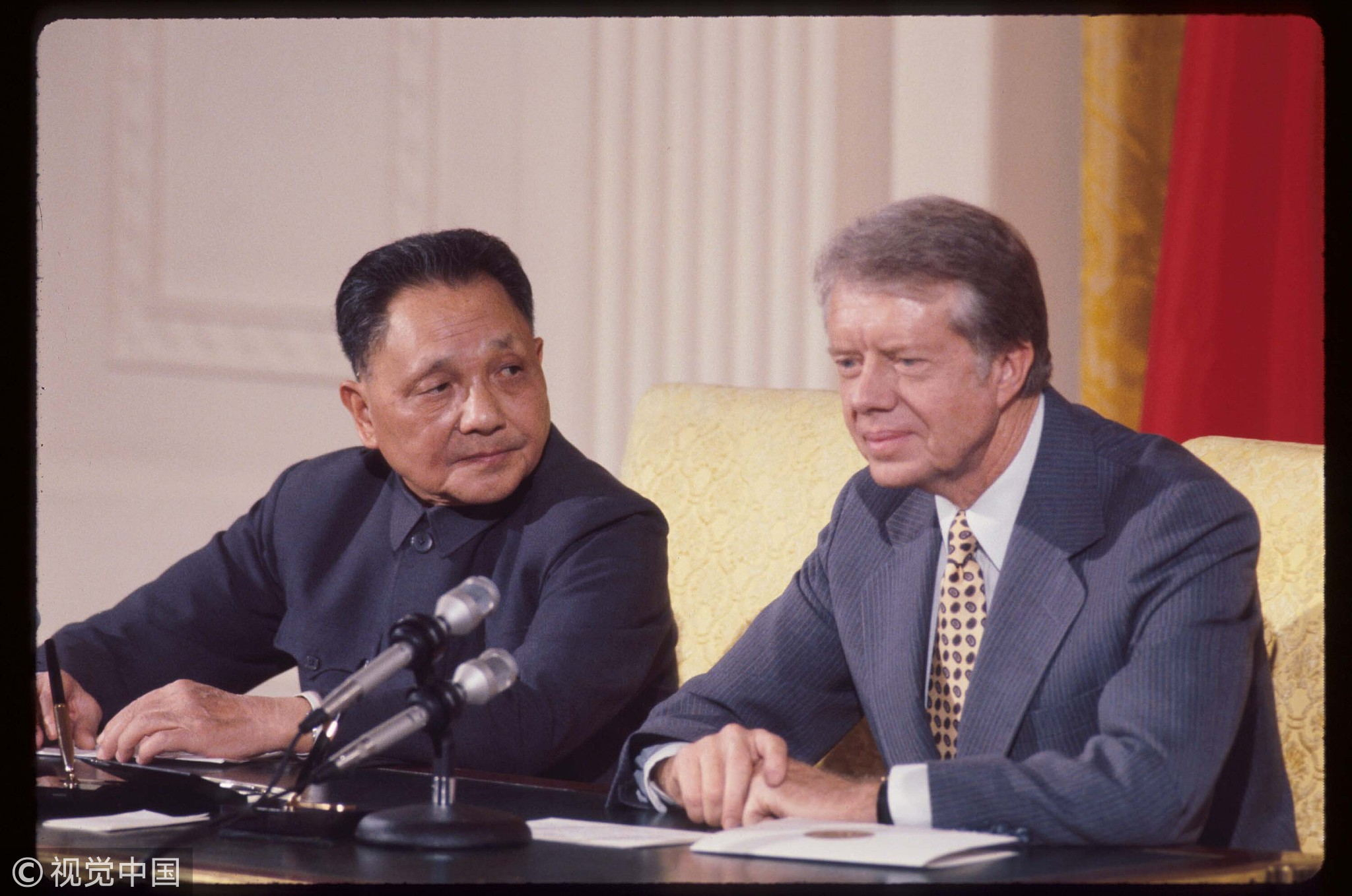 At that time, the two nations knew little about each other.
In the 1970s, many teenage boys had posters of Bruce Li on their walls. Millions of Americans visited the giant pandas Ling-Ling and Hsing-Hsing at the National Zoo in Washington. But not much was known about contemporary China, and there was very limited exchange of people and culture.
In China 40 years ago, Americans were portrayed as bumbling villains in the movies screened on sheets hung outside throughout the countryside, with the exception of the films of socialist hero Charlie Chaplin. Few had access to television, and none to Western programming. Although anti-U.S. rhetoric died down significantly after Nixon's visit to China, years of villainizing the U.S. had an impact. It's not uncommon to find people born in that area who were given names like “Fight America.”
In 1979, the first batch of Chinese students went to the U.S. to study after the Cultural Revolution. They were mature students, chosen because their strong ties to home would ensure their return.
The first wave of American students started to trickle over to China as well. Unlike the Chinese students who came to the U.S. to find well-established Chinese communities, these Americans were utter novelties. Student Brian Linden, for example, came to China in 1984 and was stopped in the street and asked to star in a feature film.
The last 40 years of U.S.-China ties are inextricably bound with China's 40 years of reform and opening-up.
Once an isolated nation, China now leads the world in outbound travel, with an estimated 142 million international trips in 2017. It is the fourth-most visited tourist destination in the world. These days in China, an American walking down the street in a major city wouldn't merit a second glance.
Earlier this year, China overtook the U.S. to have the biggest box office take in the world. Revenue from China is critical for U.S. filmmakers. 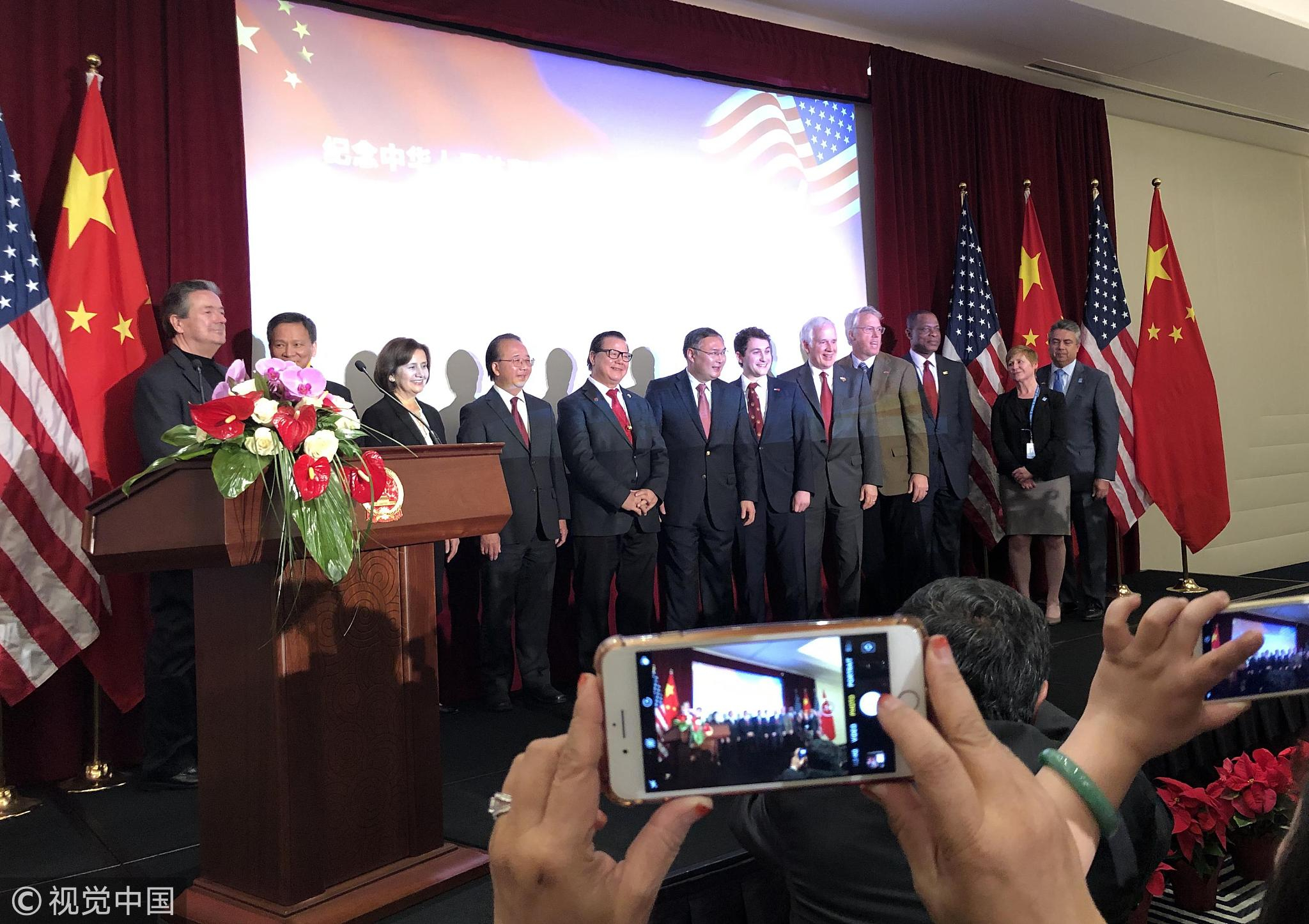 A reception was held to commemorate the 40th anniversary of the establishment of China-U.S. diplomatic relations, California, U.S., December 13, 2018. /VCG Photo

A reception was held to commemorate the 40th anniversary of the establishment of China-U.S. diplomatic relations, California, U.S., December 13, 2018. /VCG Photo

The TRS-80 Model II computer and its manufacturer are long forgotten. But Apple computers and phones are built in China, and China is one of the top consumers of Apple products.
In terms of social issues, the head of Apple Tim Cook is openly gay, and the Supreme Court has ruled same-sex marriage is a constitutional right.
Advances in computer technology have changed the world, and the way people work, find romantic partners and even eat.
China, the world leader in e-commerce by many measures, is now vying for technological supremacy in areas like supercomputing and artificial intelligence.
In a dramatic reversal over the last decade, the vast majority of Chinese who go to study in the U.S. return to China for the greater opportunities that exist in their homeland, partly created by four decades of stable, long-term economic planning.
Americans are far more familiar with China than ever before, partly due to regular in-depth reporting that appears on newspaper front pages at least several times a week.
Under the current U.S. president, it at times seems as if norms are being violated, red lines crossed, trust eroded, and U.S.-China ties will never be the same again.
However, the U.S. and China have had trade relations since the 1780s, with a long history of American businessmen trying to tap into this market of hundreds of millions. 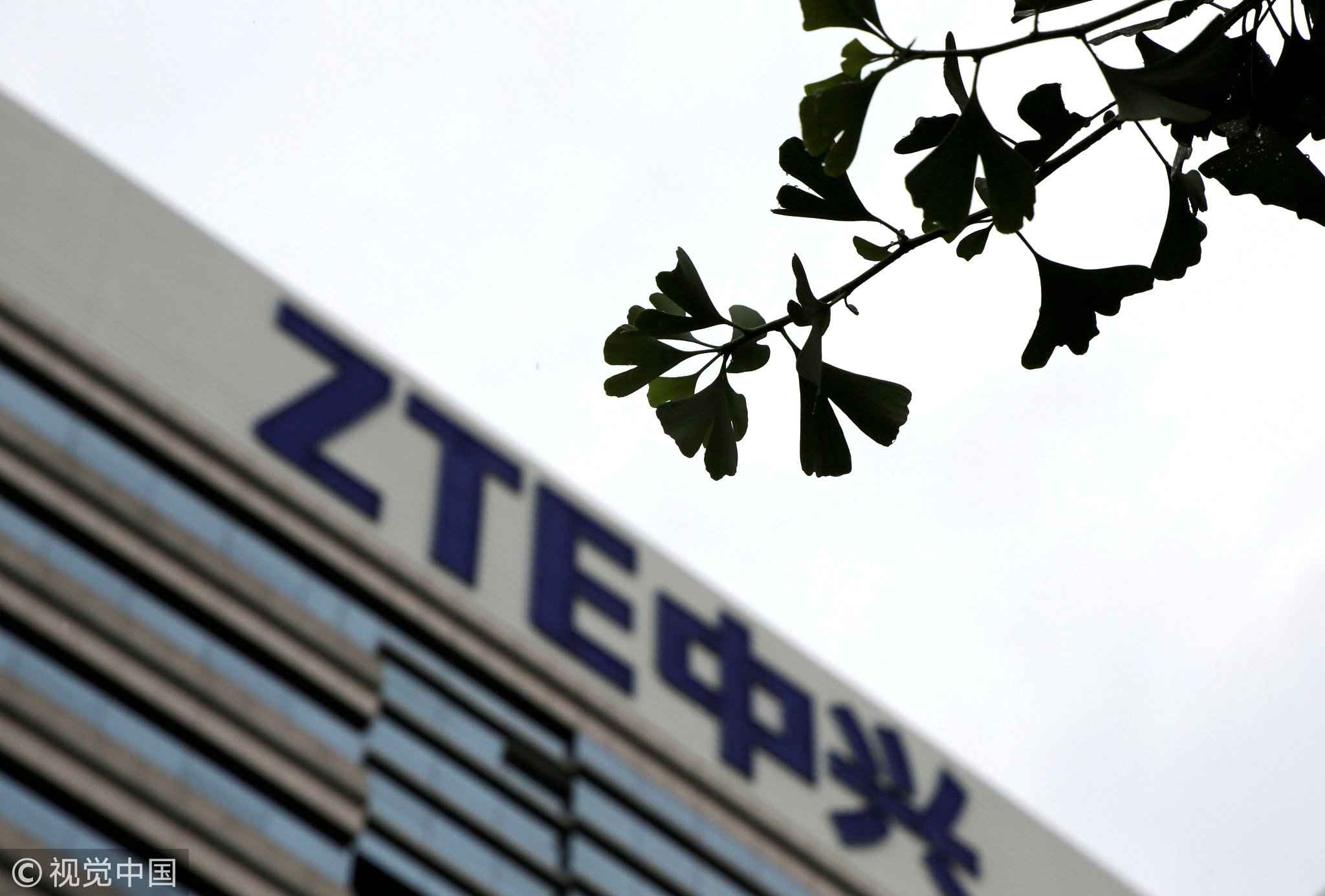 The logo of China's ZTE Corp is seen on the building of ZTE Beijing research and development center in Beijing, China, June 13, 2018. /VCG Photo

The logo of China's ZTE Corp is seen on the building of ZTE Beijing research and development center in Beijing, China, June 13, 2018. /VCG Photo

Forty years after the establishment of diplomatic ties between China and the U.S., the people of both nations largely hold favorable opinions of each other.
This is despite ups and downs, including friction over student protests, the U.S. bombing of the Chinese embassy in Belgrade, and controversy over a crashed spy plane.
After all, China and the U.S. fought side by side in World War II.
What can we expect over the next 40 years? China is getting richer, but it still is not as rich as the U.S. on a per capita basis. When that happens, China will have roughly four times the economic might of the U.S. This will translate into overwhelming military might, sway in trade matters, and resources to pour into science and research. The U.S. will be a powerful but junior partner to China – much as Japan is to the U.S. today in terms of wealth.
As China grows stronger, it is my personal hope that it can learn from and avoid a mistake the U.S. made. Americans tend to believe their great success is due to their ingenuity, hard work, deeply held values, superior system of government, and in some cases, divine favor. While all (or most) of these factors undoubtedly played an important role, Americans underestimate the impact of their land's natural bounty and the historical advantage of its isolation, which allowed it to avoid the devastation of World War I and II.
It is a human tendency across all cultures to overestimate the role of one's personal efforts in success, and underestimate good fortune and help from others. However, this tendency can lead to an overestimation of one's strengths and bargaining position, with accompanying poor decisions.
Coming back to the present, in the current trade dispute, Beijing seems to have recognized that U.S. President Donald Trump is disrupting ties and undermining trust not just with China, but all of America's trade partners, and the prudent course of action seems to be to wait things out.
After all, despite the mythology, Trump has proved a failure at the art of the deal, often revealing a losing hand and then going all in. This is most recently evidenced by his shutting down the U.S. government, a pointless move a top Republican senator called a “road to nowhere.”
The destiny of the U.S. and China are intertwined in a shared future, and as always both sides will realize they have already gained much together, and have more to gain by cooperating than squabbling.
(If you want to contribute and have specific expertise, please contact us at opinions@cgtn.com.)