US midterms: The winners making history
By Sim Sim Wissgott 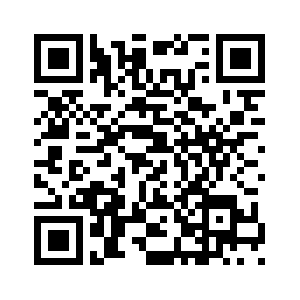 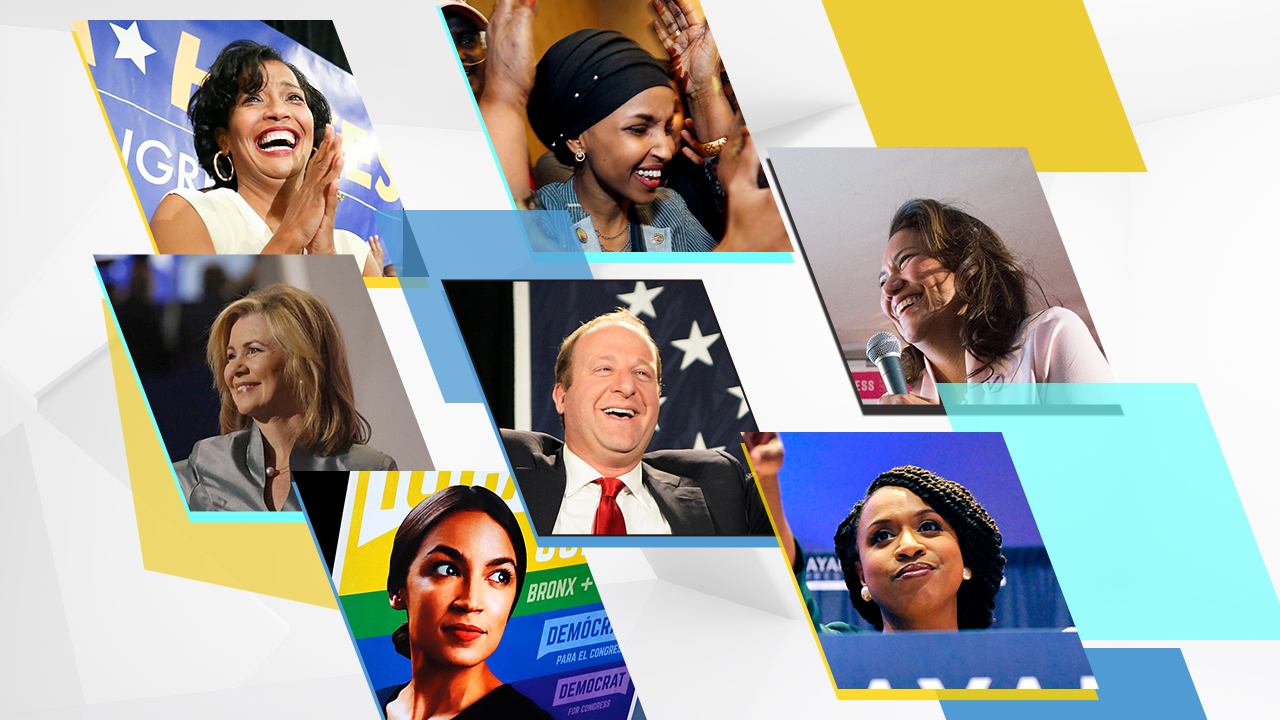 A historic batch of US senators, representatives and governors will be taking office following Tuesday's elections: among them, the country's first Muslim and Native American congresswomen, the first openly gay governor and the youngest woman ever to enter Congress.
Here is a look at some of the people breaking glass ceilings and other barriers in the 2018 US midterms.

Alexandria Ocasio-Cortez, who has become a poster child for the Democrats, scored a resounding victory in New York and will become the youngest ever woman to enter Congress, at age 29. Ocasio-Cortez, who ran on a socialist platform, created shockwaves when she won the Democratic primary in June and came to represent a wave of "millenial" candidates in this election amid efforts to lower the average age in Congress. 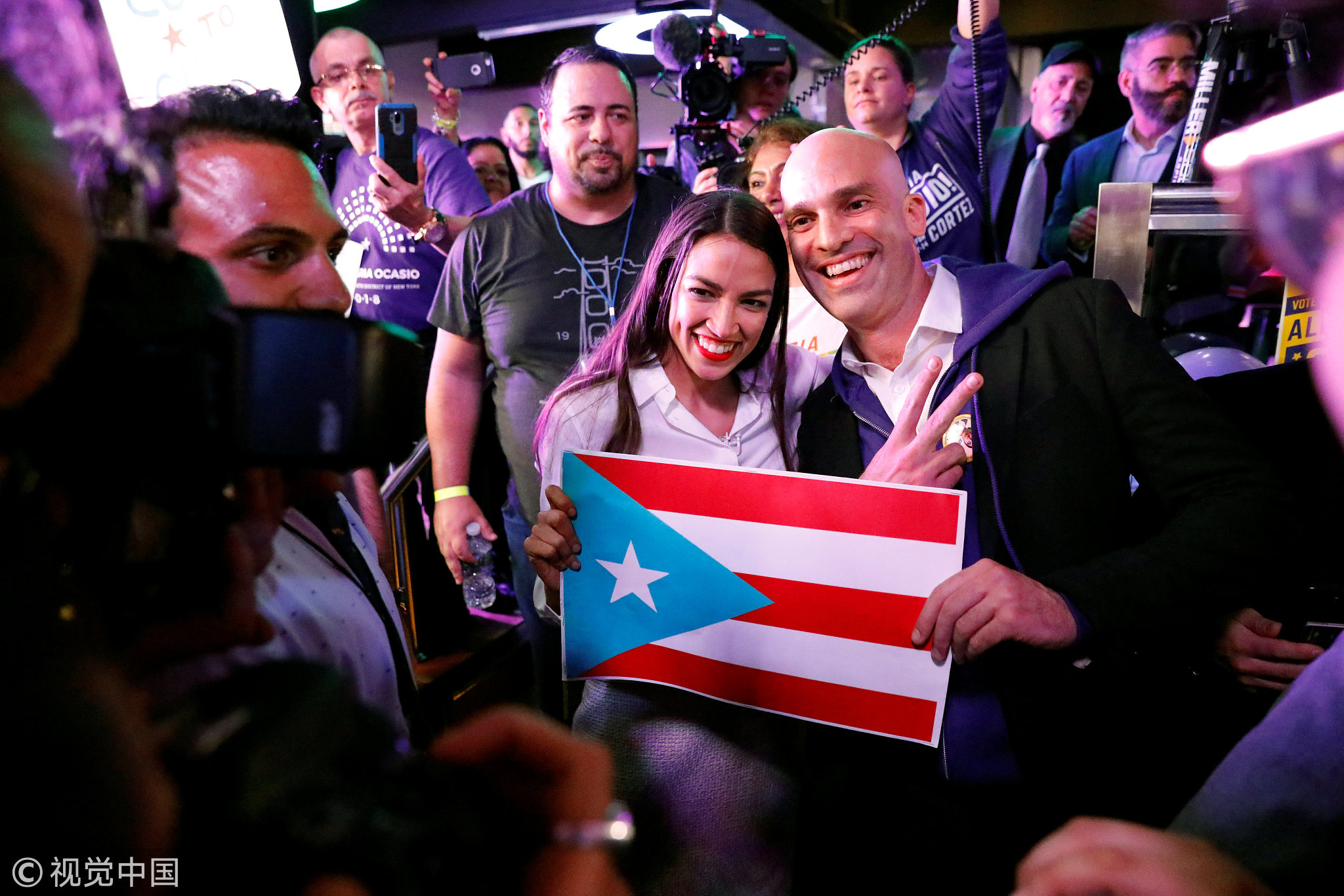 Muslim women made history with not just one but two candidates elected to Congress on Tuesday. Ilhan Omar, from Minnesota, becomes the first Somali-American woman in the House of Representatives. She will also be the first woman in the chamber to wear the hijab. Her Democratic colleague Rashida Tlaib, from Michigan, is the first Palestinian-American to enter the House.

Equally successful, two Native American women running for Congress won their seats: Sharice Davids in Kansas and Debra Haaland in New Mexico. Davids, a Democrat, flipped a seat that was previously Republican and was also one of a number of openly lesbian candidates in this election. She is a member of the Ho-Chunk tribe, while Haaland is part of the Pueblo of Laguna tribe.

These midterms were also the first to see an openly gay governor elected. Jared Polis, from Colorado, was already the first gay non-incumbent elected to the House of Representatives in 2008 and has served in the chamber ever since. 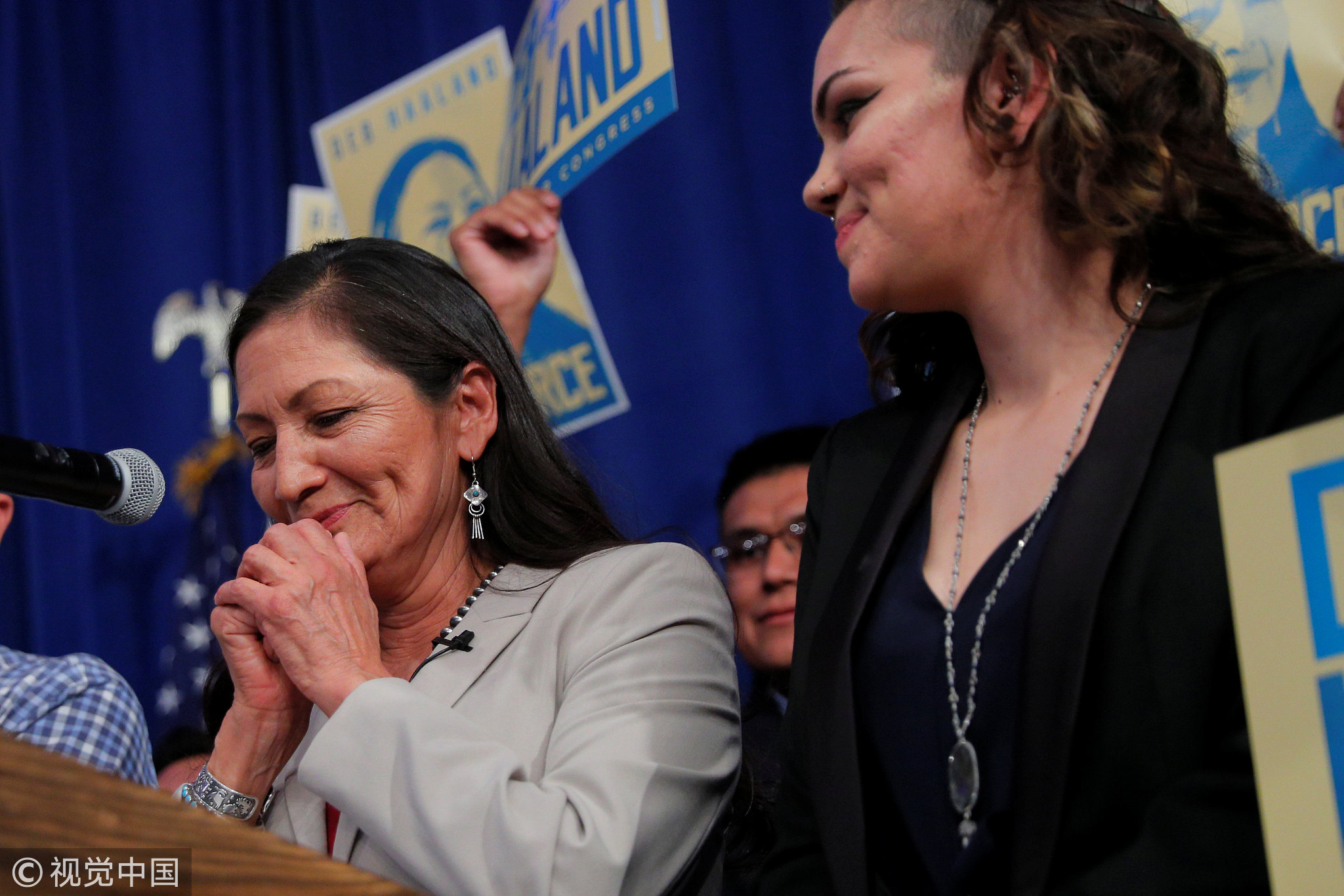 Ayanna Presley, running unopposed in Massachusetts, and Jahana Hayes in Connecticut became the first black women elected to Congress not only for their respective states but for New England as a whole.
Democrats Veronica Escobar and Sylvia Garcia broke new ground as the first Hispanic women to win a congressional seat in Texas.
Tennessee meanwhile got its first female senator: Republican Marsha Blackburn.

First or no first?

After most results had trickled in, some races still remained too close to call. As of 4:30 a.m. EST (5:30 p.m. BJT) on Wednesday, Stacey Abrams remained in the running for Georgia governor, just behind Brian Kemp. If elected, Abrams would become the US's first ever black female governor. 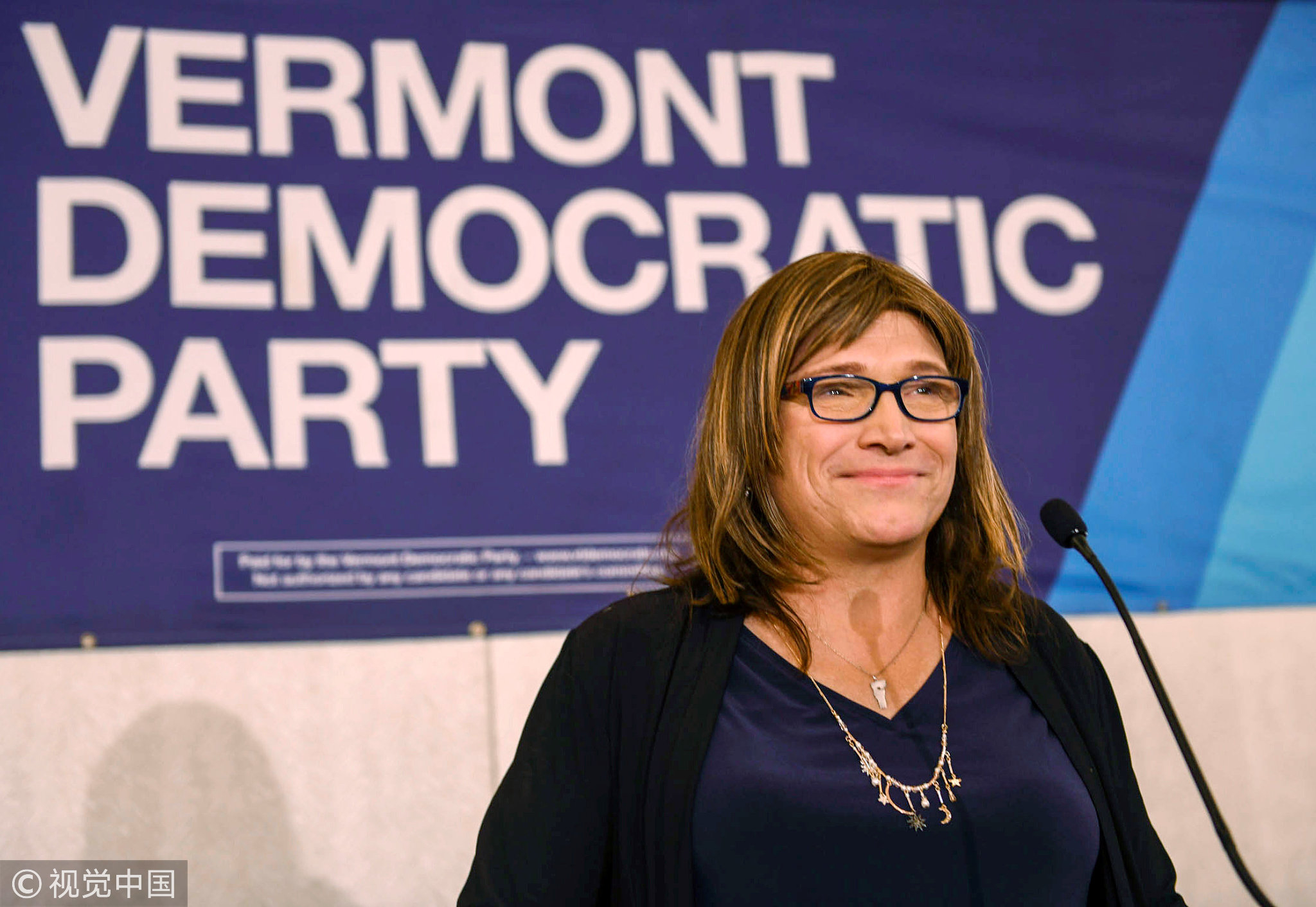 Arizona is sure to have its first female senator when all votes have been tallied but who that will be remains unclear, with Republican Martha McSally and Democrat Kyrsten Sinema neck and neck.
In California, Young Kim could become the first Korean-American woman to enter Congress.

Some barriers were harder to overcome than expected.
In a closely watched race, Christine Hallquist, running in Vermont against incumbent Phil Scott, failed to get enough votes to become the country's first openly transgender governor.
Andrew Gillum, the first black candidate to run for governor in Florida, lost to his Republican opponent Ron DeSantis, following a campaign marred by name-calling and accusations of racism.
And while Native American women made it into Congress, the governor's mansion still remained out of reach, as Republican Brad Little beat Democrat Paulette Jordan in Idaho. She would have also been the first female governor of the state. 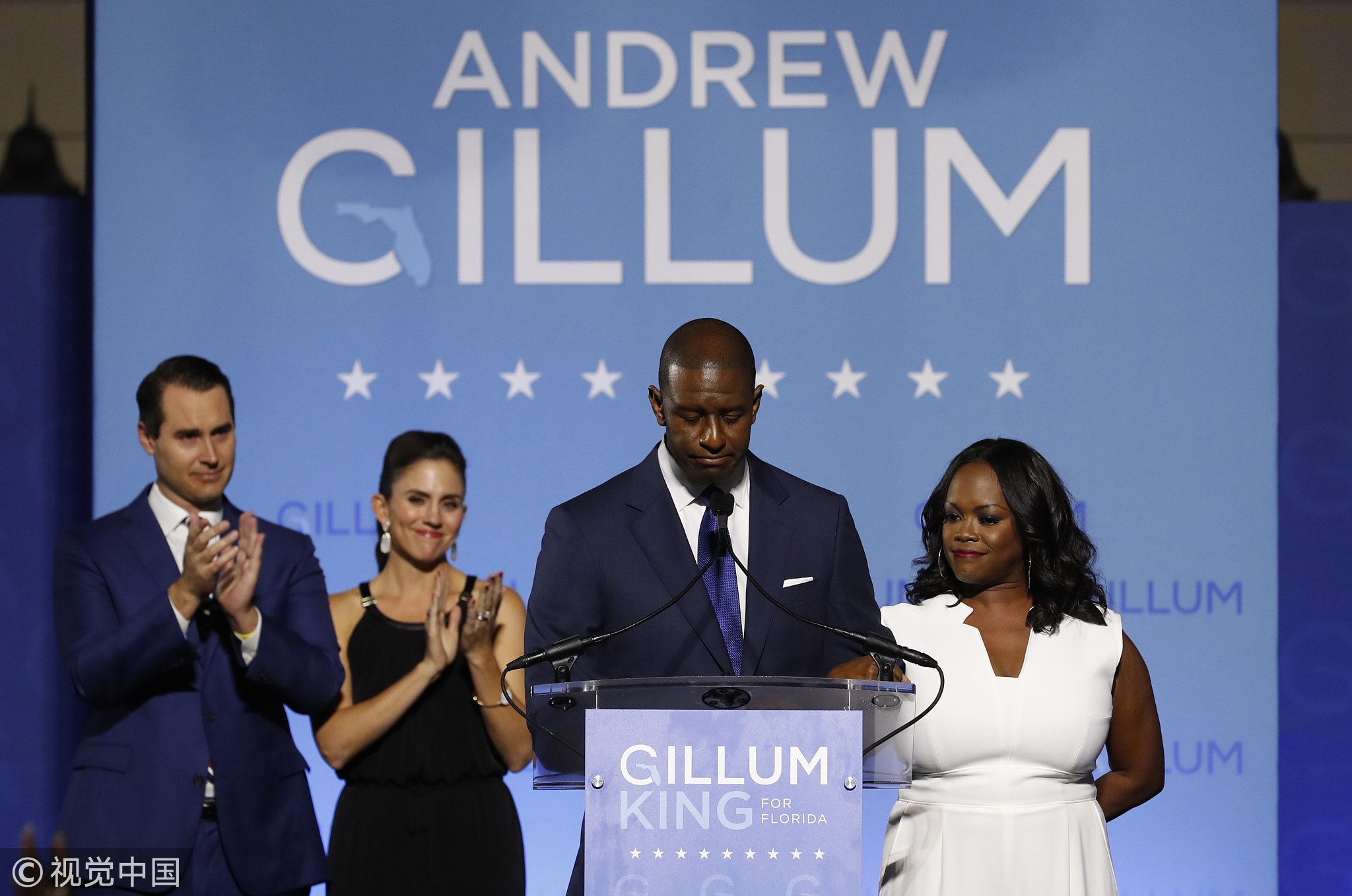 In Texas, a number of candidates on the ballot had looked set to enter the history books but fell short.
Lupe Valdez could have become the first Hispanic and first openly lesbian governor of the Lone Star state but was unable to defeat incumbent Greg Abbott.
Gina Ortiz-Jones, who would have been the first Filipina-American in Congress, also lost to an incumbent congressman.
Congressional hopefuls elsewhere were disappointed.
Massachusetts will have to wait a little longer to get its first Hispanic governor after Democrat Jay Gonzalez was defeated by incumbent Republican Charlie Baker.
Similarly, Maryland opted against its first ever black governor, preferring Republican incumbent Larry Hogan to Democrat Ben Jealous.
(Top picture: CGTN composite of VCG pictures showing, clockwork from top left: Congressional candidates Jahana Hayes of Connecticut, Ilhan Omar of Minnesota, Veronica Escobar of Texas and Ayanna Pressley of Massachusetts, a campaign poster for congressional candidate Alexandria Ocasio-Cortez, Senate candidate Marsha Blackburn and Colorado Governor-elect Jared Polis.)