Fire of Notre-Dame: An elegy of Western decline
Zhu Zheng 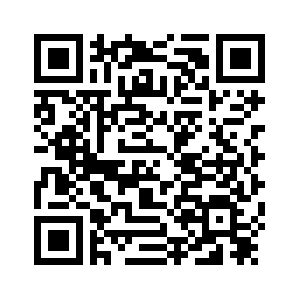 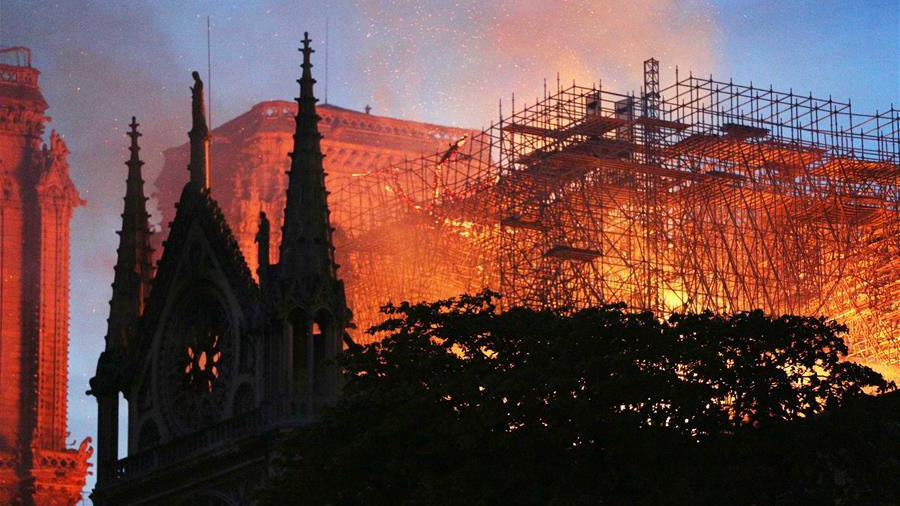 Editor's note: Zhu Zheng is an assistant professor focusing on constitutional law and politics at China University of Political Science and Law. The article reflects the author's opinion, and not necessarily the views of CGTN.
On April 15, a massive blaze at Notre-Dame Cathedral in central Paris devastated a large part of the church, leaving the landmark's roof entirely destroyed and the iconic spire collapsed.
It was reported that, luckily enough, the façade and the two famous belfries at the west end that constituted the main structure have been saved, but the fire still left the cathedral badly damaged and the whole world in shock and mourning.
In his address to the nation later on, the agnostic president Emmanuel Macron spoke with deep sadness that he had watched “part of us” burn, and he wanted the cathedral to be rebuilt within five years as it is the “epicenter of our life”. 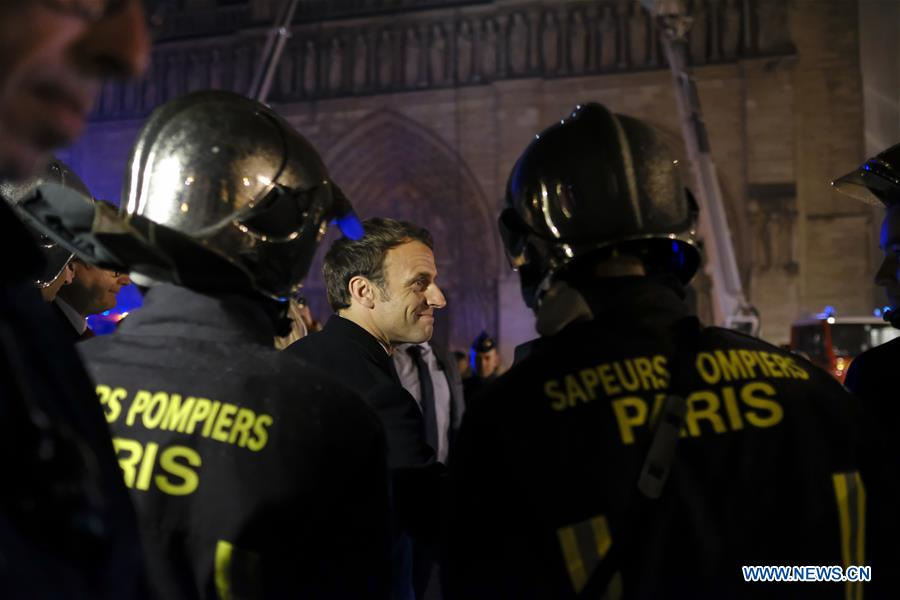 Clearly, as a cultural symbol, the church carries much more than it looks – the devastating flames, which is said to be a purely accident, would be examined through cultural, religious and political angles.
In terms of the cultural nuances, the church represents and combines imaginings of France's beauty and soul, not merely because its longevity – the foundation stone was laid 850 years ago and it took nearly 200 years to complete, which is truly a work of generations, but due to its literary and historical importance as follows.
In his famous novel Notre-Dame de Paris, better known as The Hunchback of Notre-Dame, Victor Hugo extolled the building as a “great edifice” and “the work of centuries”, with all human intelligence summed up and totalized in the setting. The novels of many authors have brought the world's focus to the beauty of the church, and the mystery thereof. 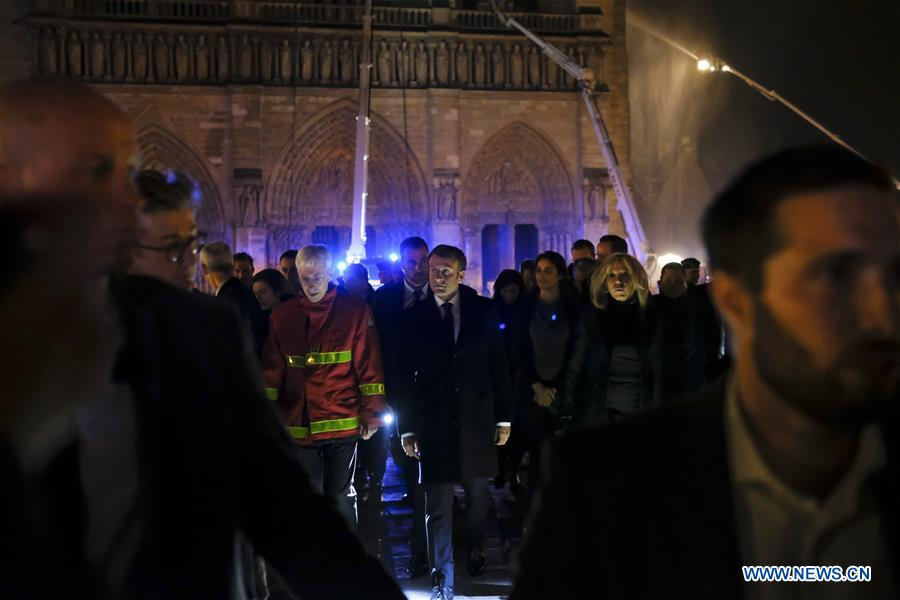 Precisely because of its grace and glamour, which is to some extent enlarged through literary illuminations, the Cathedral has become a place witnessing key junctures of history. For example, the French Revolution that promoted the ideals of reason, virtue, and liberty has brought a breath of fresh air to the building, which replaced Christianity with a Temple of Reason (Temple de la Raison) and attached a heavy weight to the cult of reason. Notre-Dame as a vital site ushered in new rituals showing respect to reason.
More intriguingly, after the Church was heavily damaged by revolutionaries because of the drive of religious disenchantment during the grand revolution, Napoleon Bonaparte, nevertheless, chose Notre-Dame as the site of his 1804 coronation, and from then on, the cathedral remained a place for imperial ceremonies until the Romantic Movement.
Thus, it seems that much of historical and cultural symbols have been engraved into the building, and most remarkable of all, the church symbolizes the ups and downs of Christianity. Indeed, although Christianity has once gained superior status, as some observers noted, this week's tragedy contained a deep but hidden metaphor that Catholic has suffered most by the forces of modernity in France: religious sites are moribund, and French younger generations are increasingly irreligious than their contemporaries in other European countries – what really hurts is not just the church being destroyed, but the decline of Christianity in the face of time. 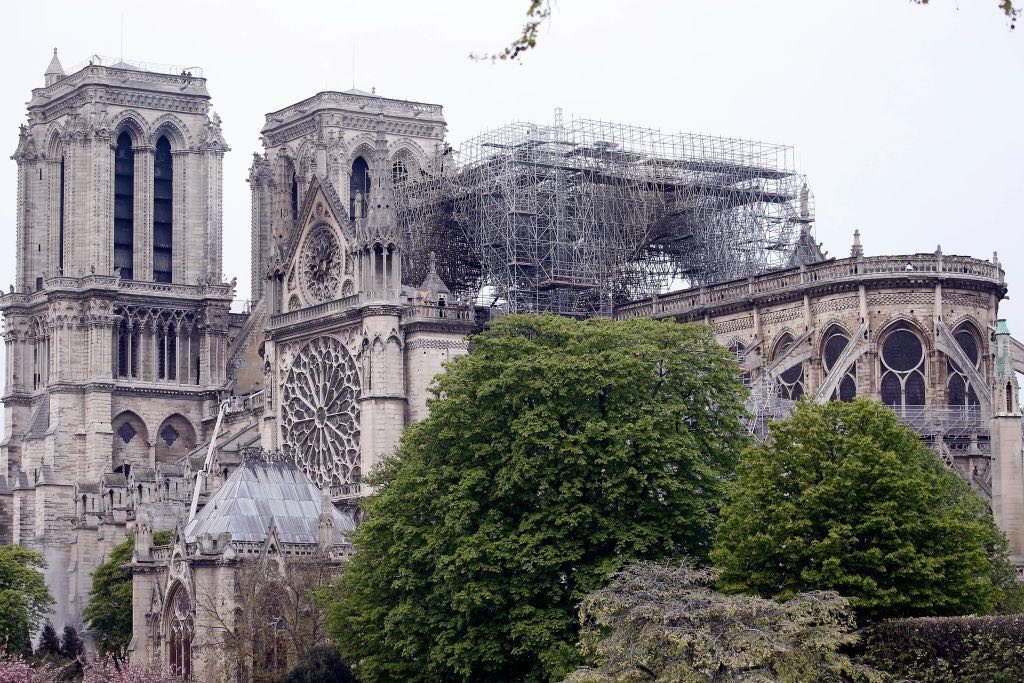 However, none of the above cultural severing and religious weakness is comparable to the political near-destruction that has been seen in recent months. With the “yellow vest” protesters took to the street and punch-ups seen everywhere in the Avenue des Champs-Élysées, the Fifth Republic has suffered a series of hefty blows by mass demonstrations. The protesters on façade have called for economic well-beings, from lowering fuel taxes to increasing a minimum-wage, but deep down they have been expressing grievances over economic reforms and the political system at large.
To sum up, as Notre-Dame embodies a rich amount of cultural, religious and political ingredients, its burning tells more than it appears: if the collapse of the Twin Towers of New York City in 911 represented a deep wound of American capitalism, the fall of Notre-Dame spire is at least a sign of decay of Christendom in France and perhaps even a deny of the state's political order. For those who are looking for metaphor, the fire of Notre-Dame is arguably an elegy, which signifies a start of a prolonged process of Western decline.
(If you want to contribute and have specific expertise, please contact us at opinions@cgtn.com.)