Graphics: U.S. mass shootings in past five years, where and when?
By Hu Yiwei 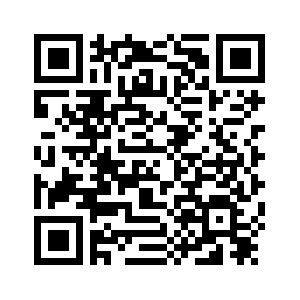 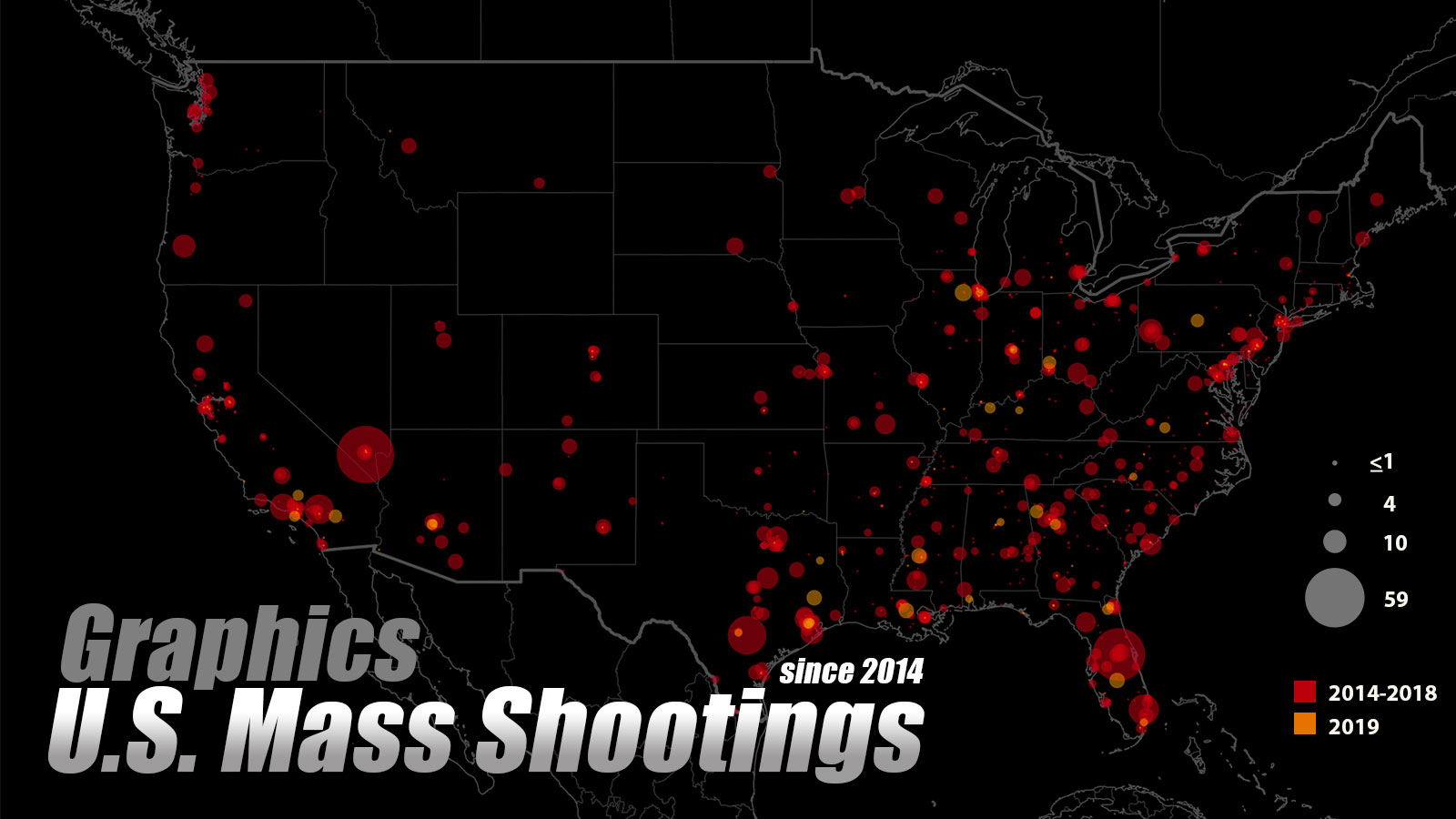 Note: The dots in the cover image show the number of people killed in mass shootings in the United States from 2014 until last Sunday. The definition of "mass shooting" according to the Gun Violence Archive and in this article refers to at least four casualties in a single incident, not involving the shooter.

The year of 2019 has entered its 20th week. From January 1 until Thursday, the United States has seen more than 120 mass shootings, which averages to about six mass shootings a week, according to the Gun Violence Archive.

The cover image already shows that such incidents this year basically took place in the states that have seen many mass shootings in the past, such as California and some southeastern states in the U.S. 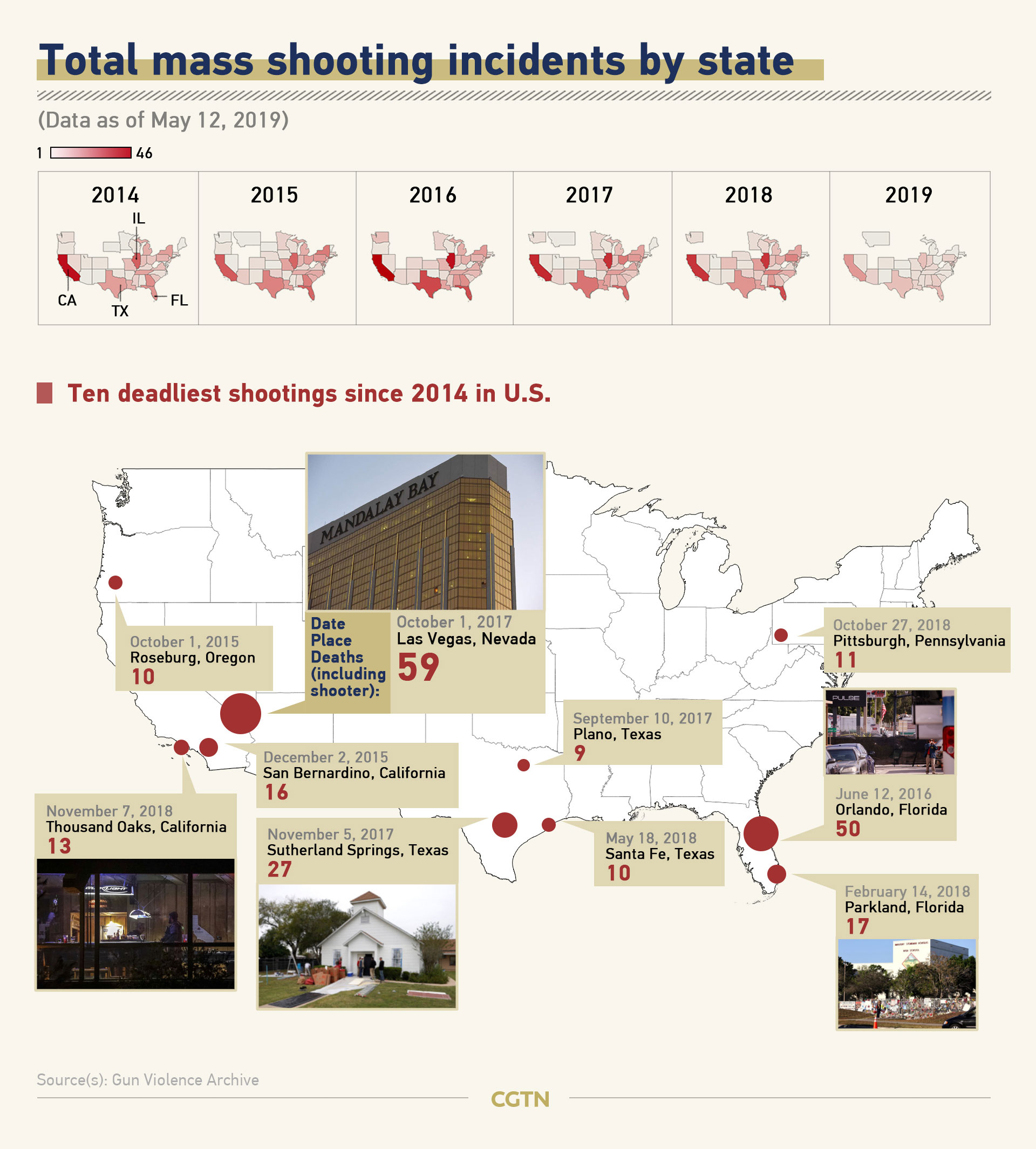 As illustrated above, states with deeper colors such as California, Texas, Florida and Illinois have seen more shooting sprees in the past few years. The data in 2019 is already showing the same pattern.

Moreover, among the 10 deadliest shootings in the past five years, seven occurred in three of these states.

But if we take the population into account (since these four states are also the most populous regions), the jurisdiction with the highest rates of mass shootings is the District of Columbia. Illinois comes third, while figures for California, Texas, Florida are all around the nation's average.

As for possible locations of the shooting cases, people have a greater chance of dying in mass shootings if they're in commercial areas or at school, according to the FBI. 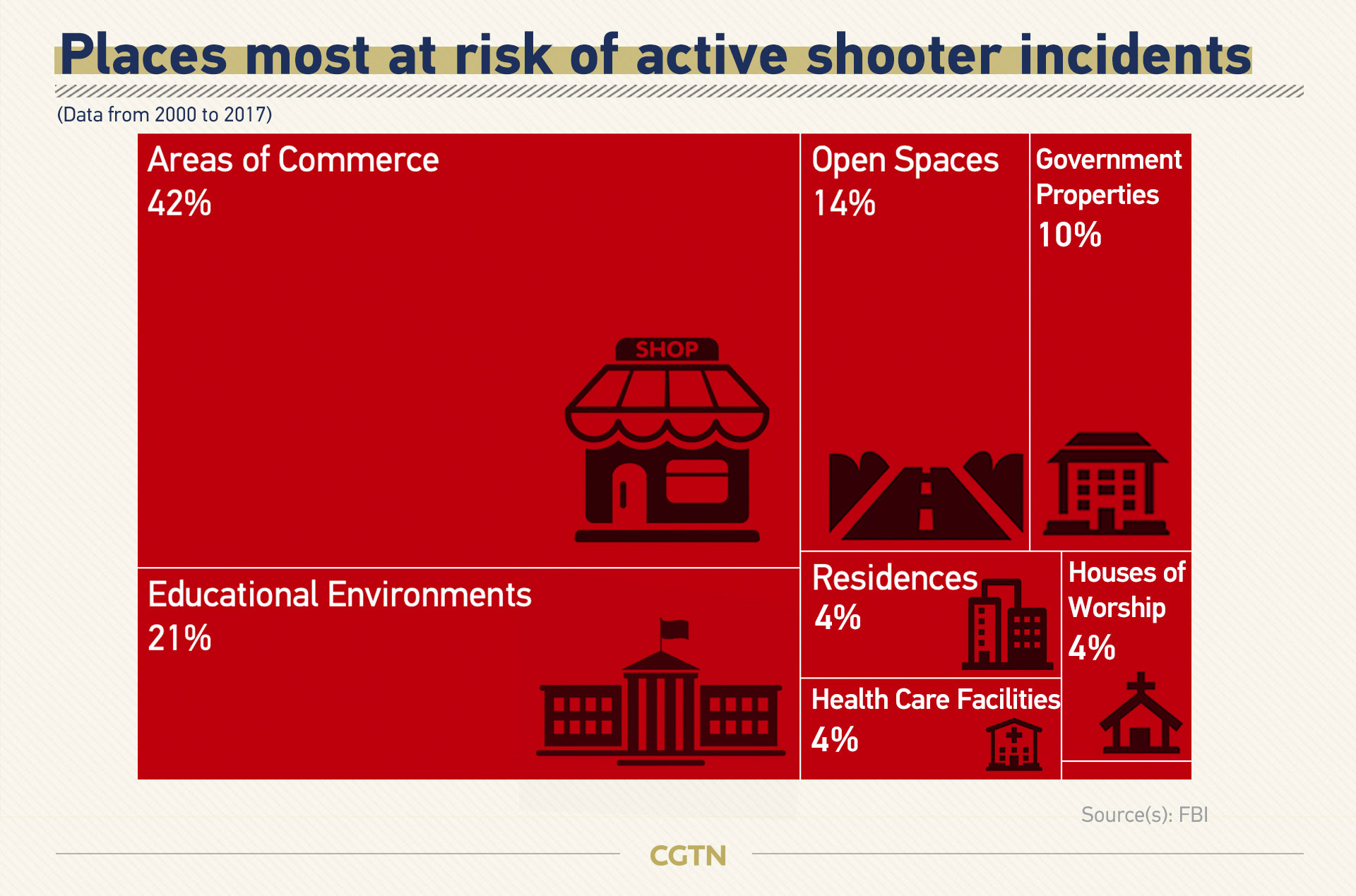 Based on quarterly data of recent mass shooting cases, the third quarter – the hottest time of the year – always shows the highest counts.

One of the major reasons might be the warm weather. Studies from around the world have repeatedly linked rising crime to rising temperature, citing the physical effects of heat on people and increased chances available to commit crimes. 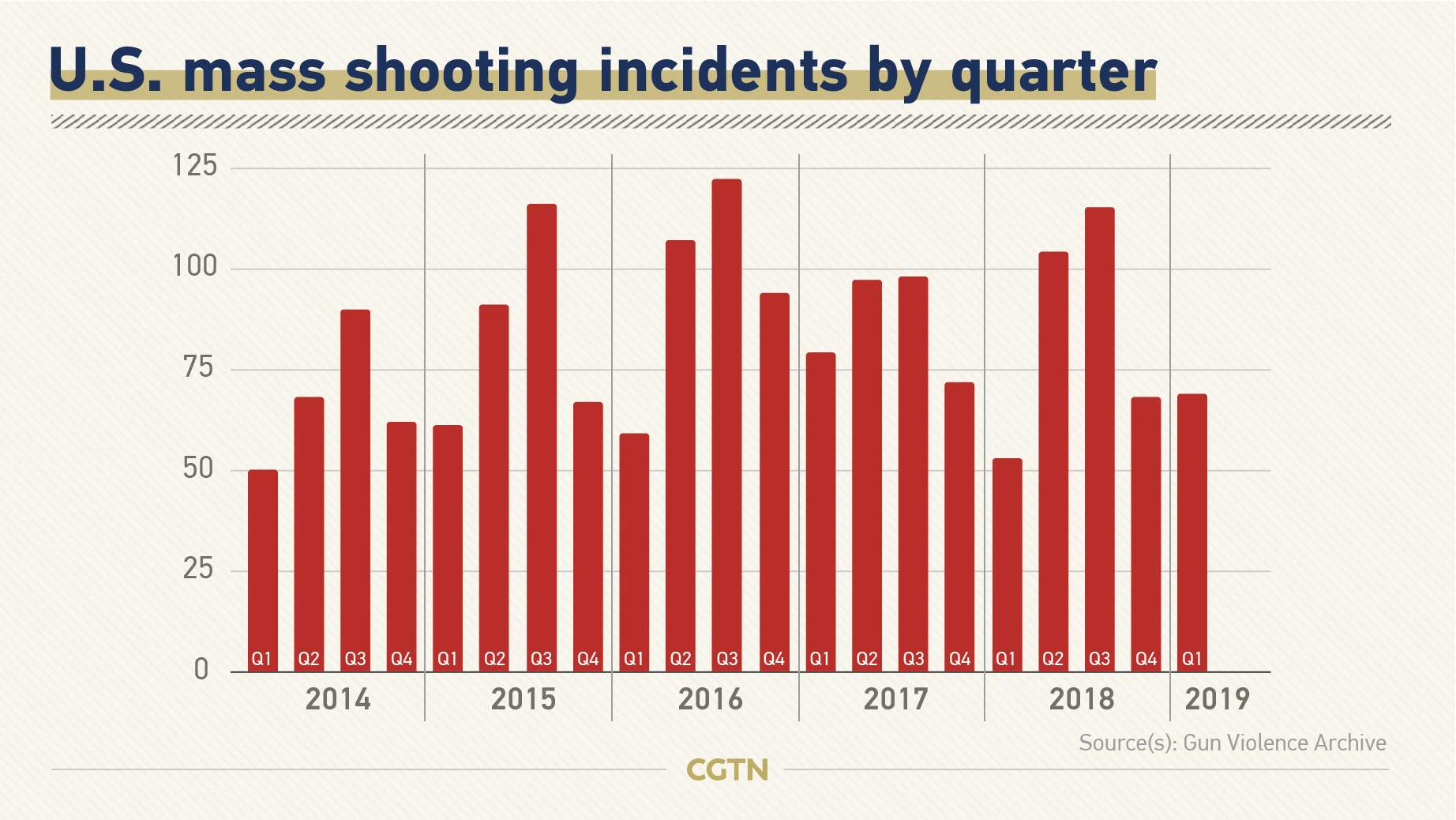 Mass shootings are disturbingly common in America. One mainstream explanation for such a high rate is the country's astronomical number of guns.

By estimates, the number of firearms available to American civilians is at around 393 million, which means the U.S. alone owns over 45 percent of civilian-owned firearms globally, according to Small Arms Survey (2018).

On average, Americans also possess more guns than residents of any other country. 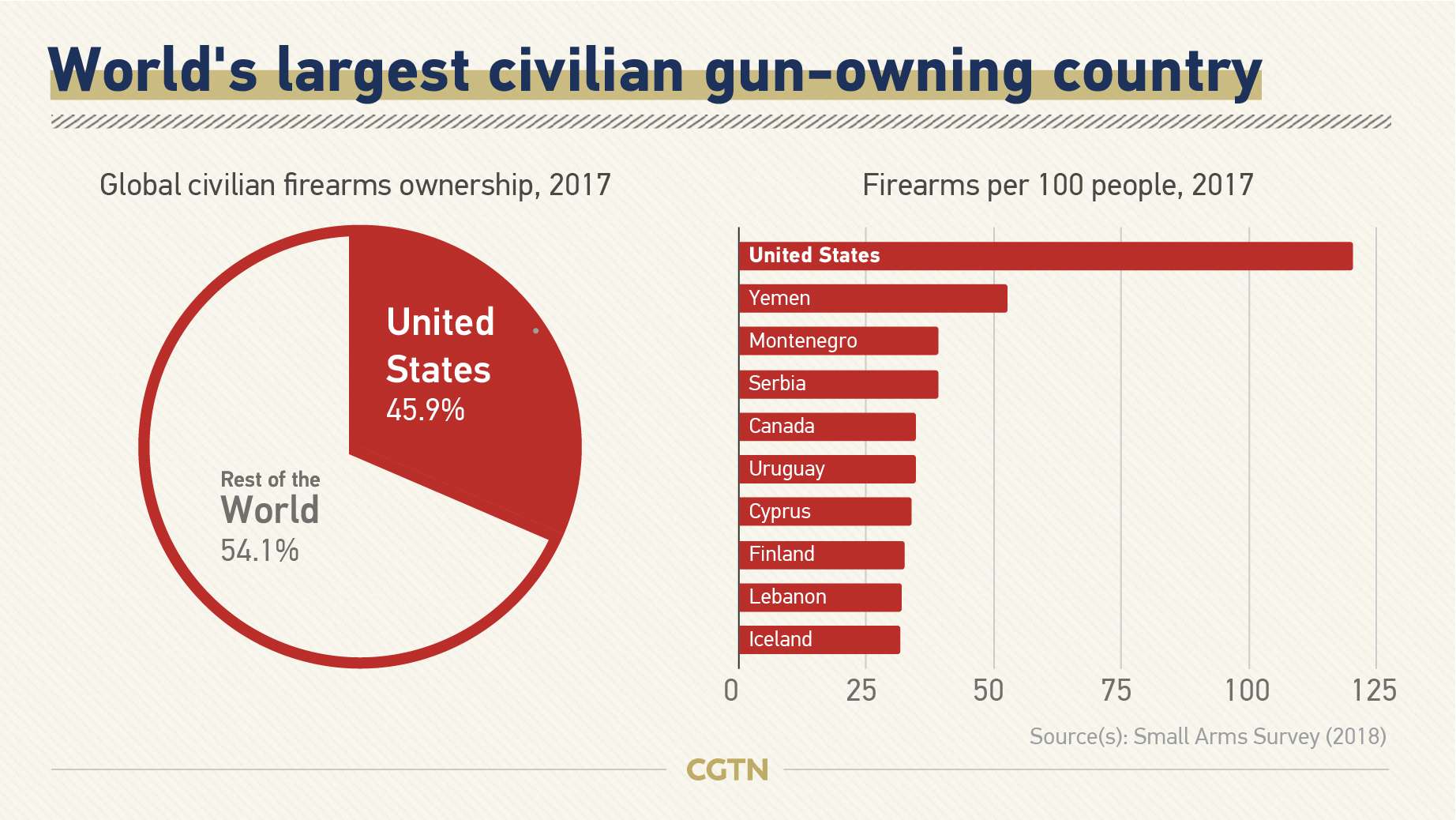 But gun control is one of the most divisive issues in American politics. In an interview this week, New Zealand Prime Minister Jacinda Ardern said she did "not understand" why the United States has not passed stronger gun laws in the aftermath of mass shooting events.

New Zealand launched a swift overhaul of gun laws after a lone gunman killed 51 people at two mosques in March.

Why is gun control so difficult in the U.S.?

Despite a series of deadly shootings in the U.S. in recent years, little headway has been made in the way of gun-control reforms.