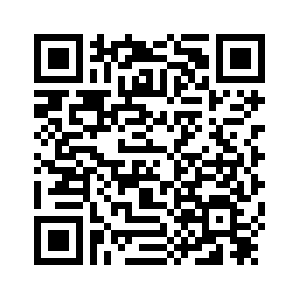 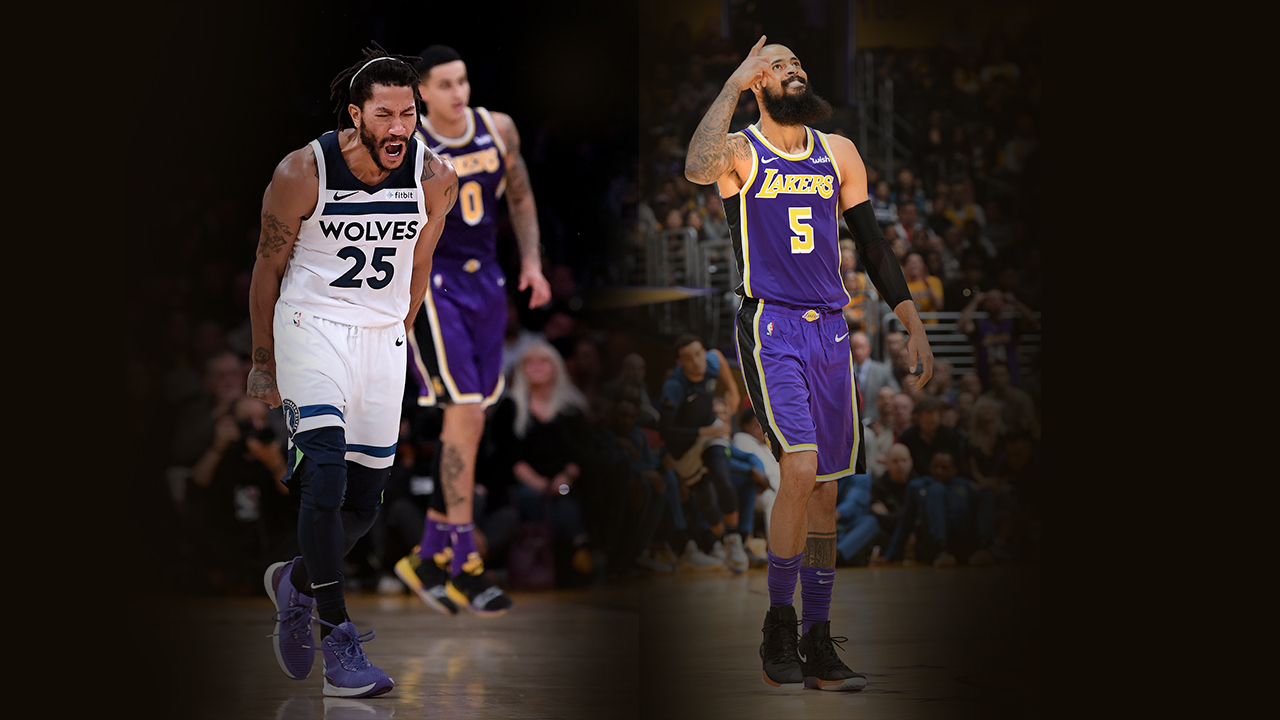 During Wednesday night's 10-game slate of NBA action, the Los Angeles Lakers defeated the Minnesota Timberwolves 114-110 at home as the newly signed Tyson Chandler made key contributions in his first appearance with the team. 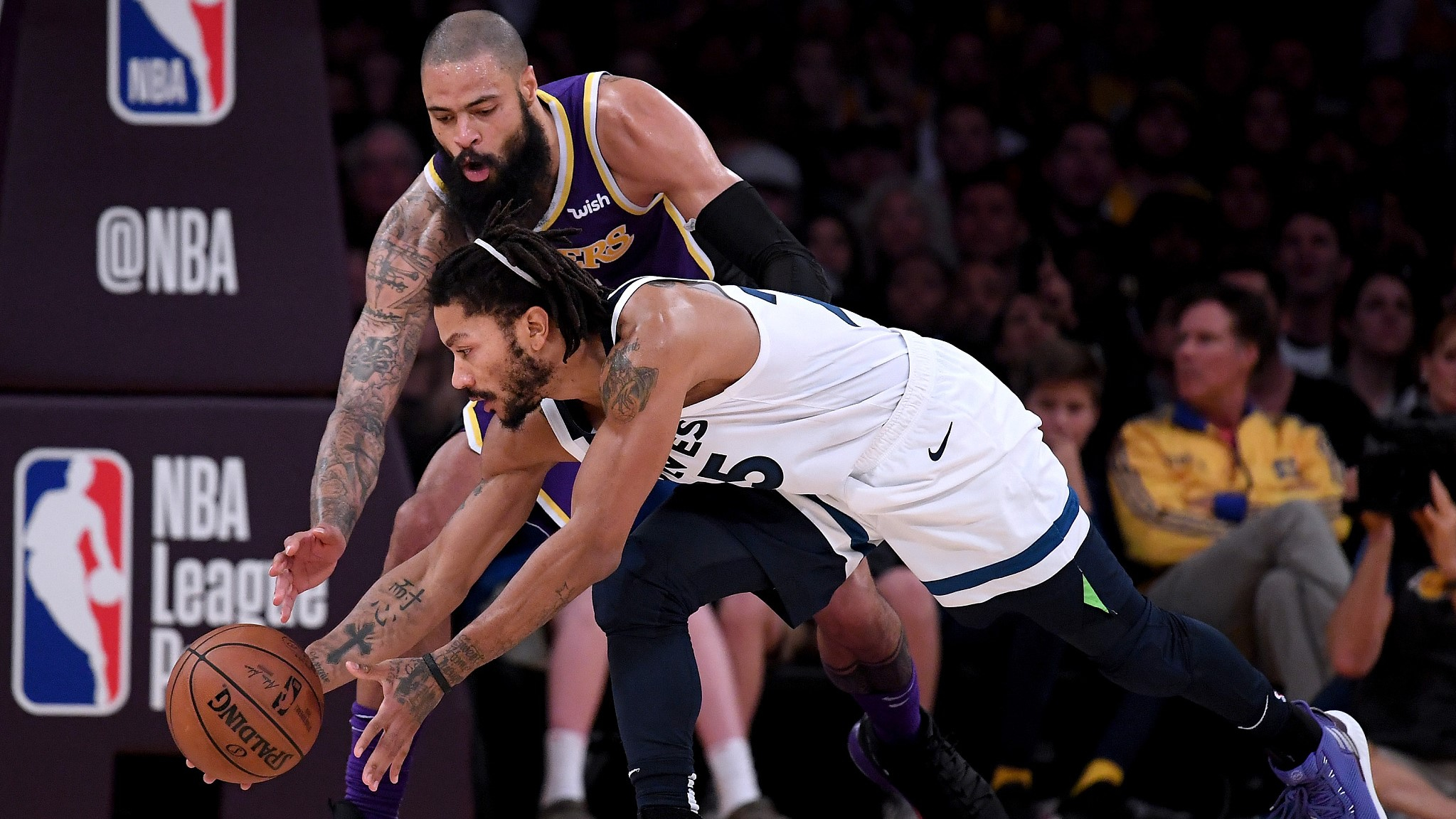 The Lakers' humiliating loss to the Toronto Raptors on November 4 didn't seem to be a wake-up call for the young roster, as they played the first three quarters against Minnesota quite "peacefully." Neither team bothered to spend much energy on defense, and instead acted as spectators as opposing players dunked and drained open threes.
If the Lakers' problems can be attributed to growing pains or a lack of personnel, the Timberwolves had only themselves to blame. Whenever Karl-Anthony Towns was on the court with Jimmy Butler, he seemed very confused about his role. For multiple moments in the game, Towns established himself in the low post only to find that he was either in Butler's way or couldn't touch the ball. As for Butler, when he was handling the ball, neither Towns nor Andrew Wiggins expressed much interest in stretching out the space for him. Instead, they stood there and watched. Actually, the Timberwolves offense was smoothest when either Butler was on the court without Towns, or vice versa. 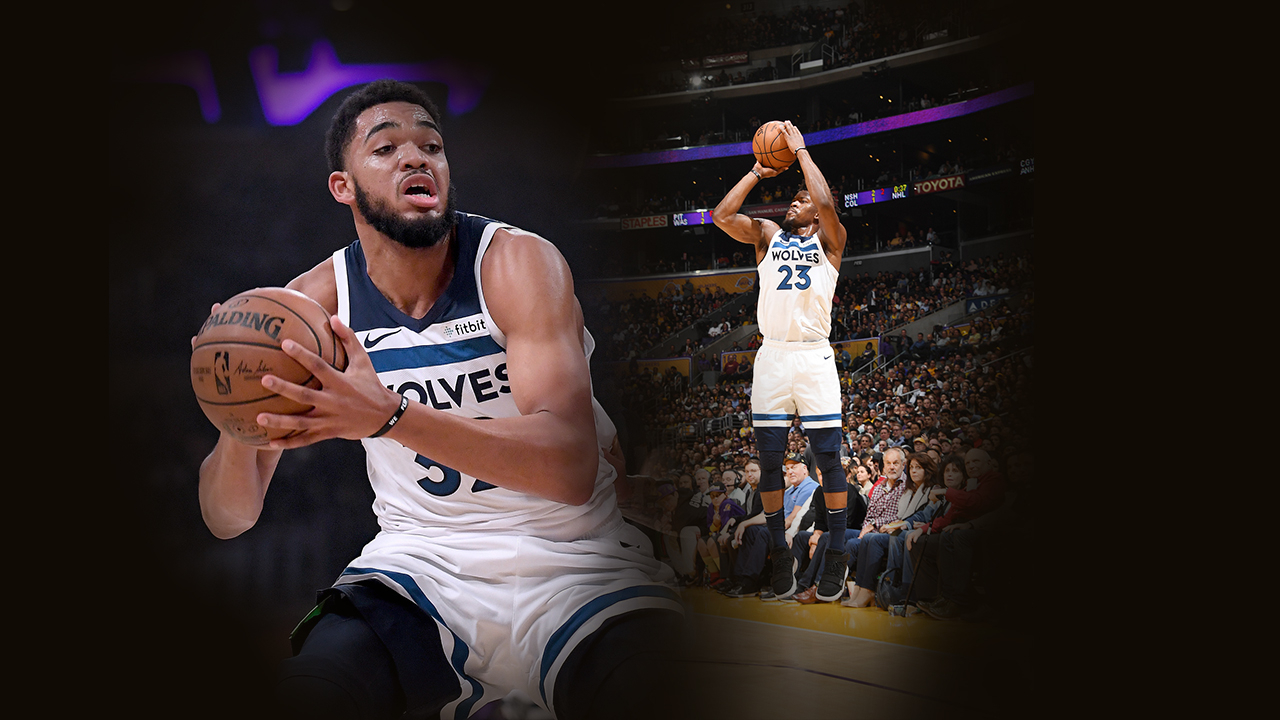 Wednesday's game should be a good reminder to the Timberwolves that Karl-Anthony Towns (L) and Jimmy Butler (R) may not be comfortable playing together on the court. /VCG Photo

Wednesday's game should be a good reminder to the Timberwolves that Karl-Anthony Towns (L) and Jimmy Butler (R) may not be comfortable playing together on the court. /VCG Photo

Rose again became Minnesota's top player by scoring 31 points, including seven three-pointers made on nine attempts. On the other side, Chandler, who just joined the Lakers from the Phoenix Suns, proved his reliability, especially on defense and on the boards.
Entering the fourth quarter, the Lakers became more physical and focused. Starting with an 8-0 run, LA did not trail once in the last quarter. As Brandon Ingram made a three-pointer to help the Lakers lead 104-101, the Timberwolves looked at Rose who immediately responded with the same shot to tie the score.

Rose made seven three-pointers in the game and almost reversed the tide for Minnesota with his last shot. /VCG Photo

Rose made seven three-pointers in the game and almost reversed the tide for Minnesota with his last shot. /VCG Photo

After the Lakers launched a 7-0 run, Rose put in another two three-pointers to narrow the score to 110-111, meaning that one shot would decide the game. The Lakers kept missing shots, but Chandler, a 36-year-old center, grabbed three consecutive offensive rebounds. Thanks to his efforts, the Lakers killed 34 seconds during the attack and gained two free throws, which resulted in one point by Kyle Kuzma. Rose then took the last shot for the Timberwolves outside the three-point line but missed it in front of Chandler's defense. At last, Josh Hart put in two free throws to seal the victory for the Lakers.
The Lakers had three players score over 20 points: Ingram (20), Kuzma (21) and LeBron James (24), who was one assist shy of a triple-double. Chandler made two points and nine rebounds, including five offensive rebounds. Rose was Minnesota's leading scorer with 31 points, while Butler scored 24 points. 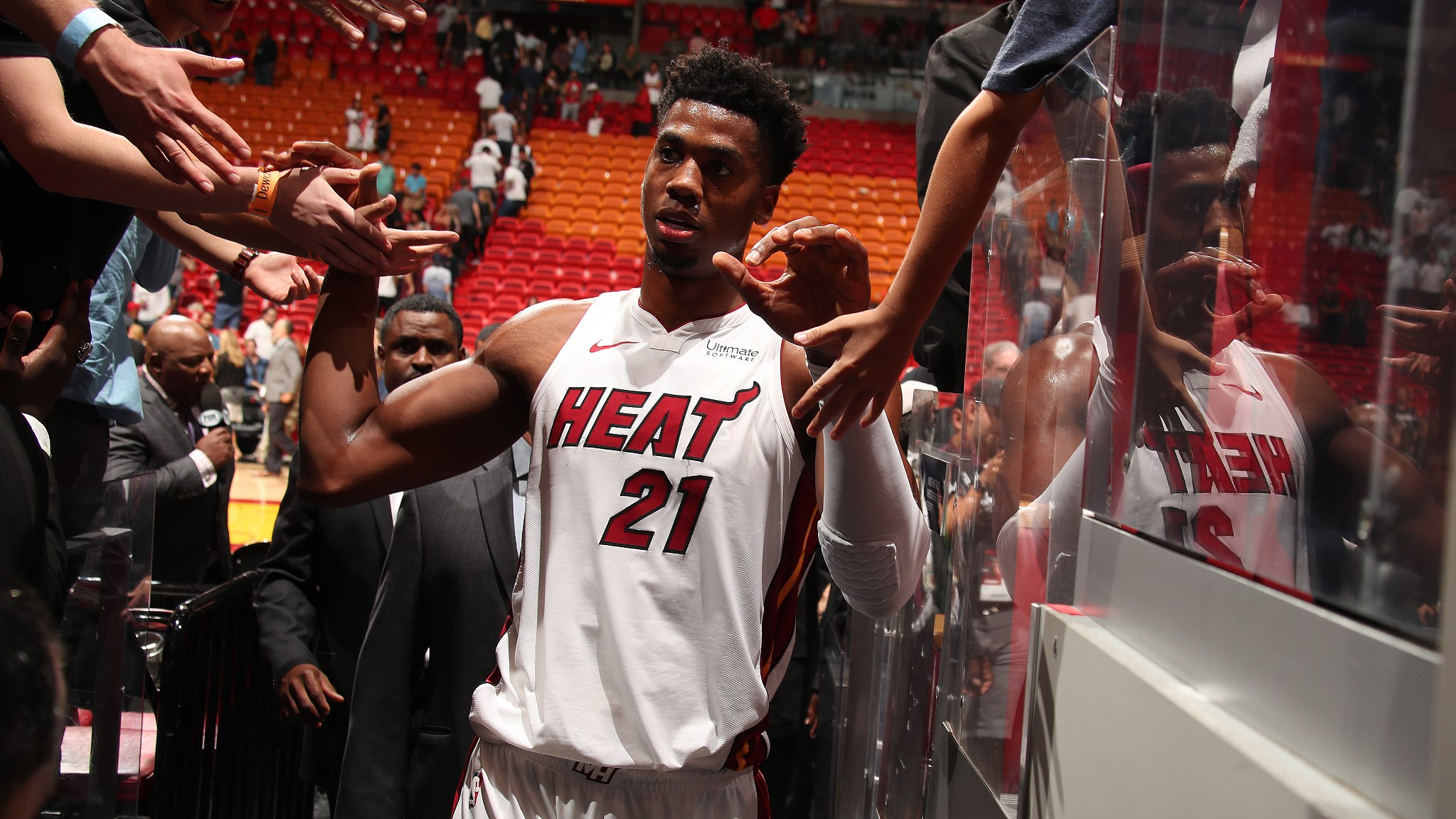 Hassan Whiteside was only one block away from a triple-double as the Heat ended their losing streak to San Antonio. /VCG Photo

Hassan Whiteside was only one block away from a triple-double as the Heat ended their losing streak to San Antonio. /VCG Photo

The Miami Heat put an end to one of their embarrassing records as they defeated the San Antonio Spurs 95-88 at home. The team's center, Hassan Whiteside, made the biggest contribution with 29 points, 20 rebounds and nine blocks.
Since LeBron James departed Miami in the summer of 2014 summer, the Heat have lost nine games in a row to the Spurs until Wednesday. Though Miami's legend Dwyane Wade missed the game, Whiteside carried his team on his shoulder. He made 10 points, seven rebounds and five blocks in the first quarter to become the fourth player with such numbers (10+5+5) in the past 15 seasons. As he delivered his eighth block in the first half, Whiteside broke the first-half block record held by Alonzo Mourning (seven). 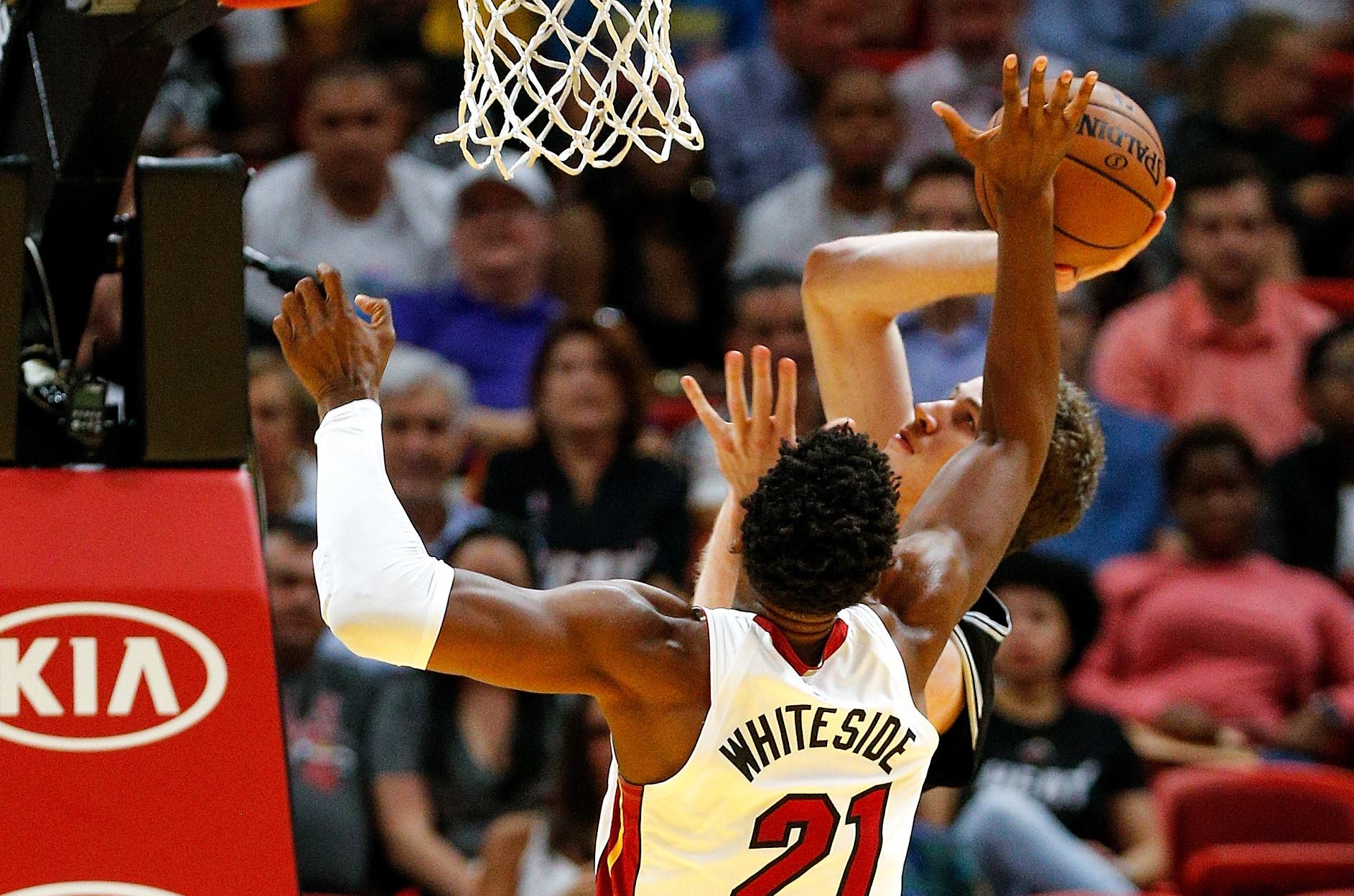