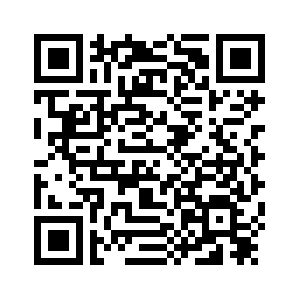 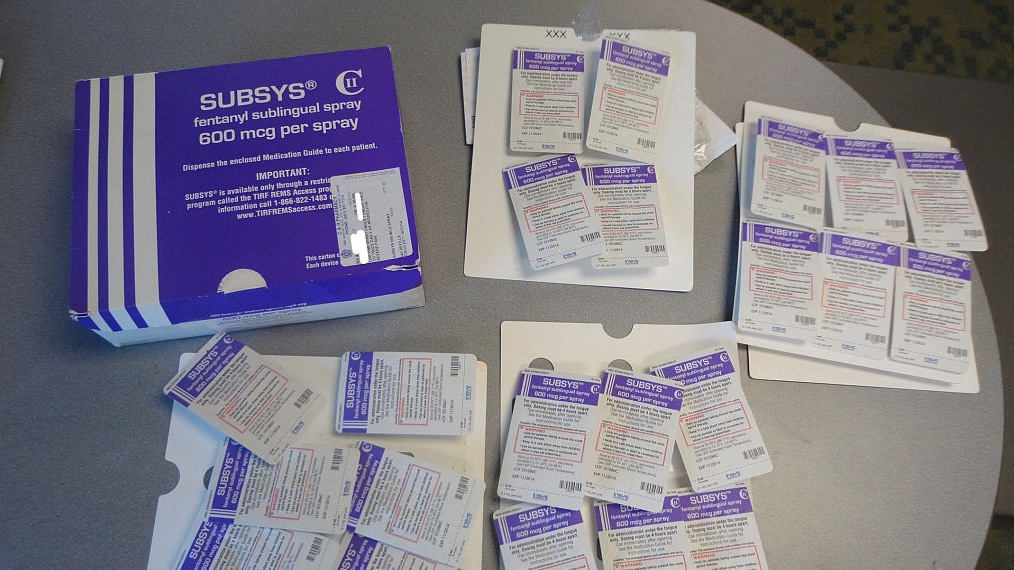 Editor's note: Li Zheng is an associate research fellow at the China Institutes of Contemporary International Relations, Institute of American Studies, and director of the American Security Center, Institute of American Studies. The article reflects the author's opinion, and not necessarily the views of CGTN.
On April 1, three regulatory authorities in China jointly issued a notice announcing the inclusion of fentanyl in the Supplementary Catalogue for Controlled Varieties of Non-medicinal Narcotic Drugs and Psychotropic Substances from May 1.
The Chinese regulatory authorities have implemented the most strict and comprehensive fentanyl drug management regulations in the world, which fundamentally eliminates the channels of abuse or illegal distribution of this type of drugs.
Fentanyl drugs are highly addictive and toxic. Since it is much more effective than morphine, heroin and other similar drugs, drug traffickers need only a small amount of fentanyl to be distributed in the local drug network.
Fentanyl can be synthesized into a variety of chemical compounds with similar effects, which poses new challenges for drug regulation. There are dozens of fentanyl species used in drug abuse worldwide, and the number of potential analogs may be as high as tens of thousands.
The practice of the Chinese regulatory authorities is to significantly expand the scope of control to the “molecular level” and include all derivative chemicals in the fentanyl category. 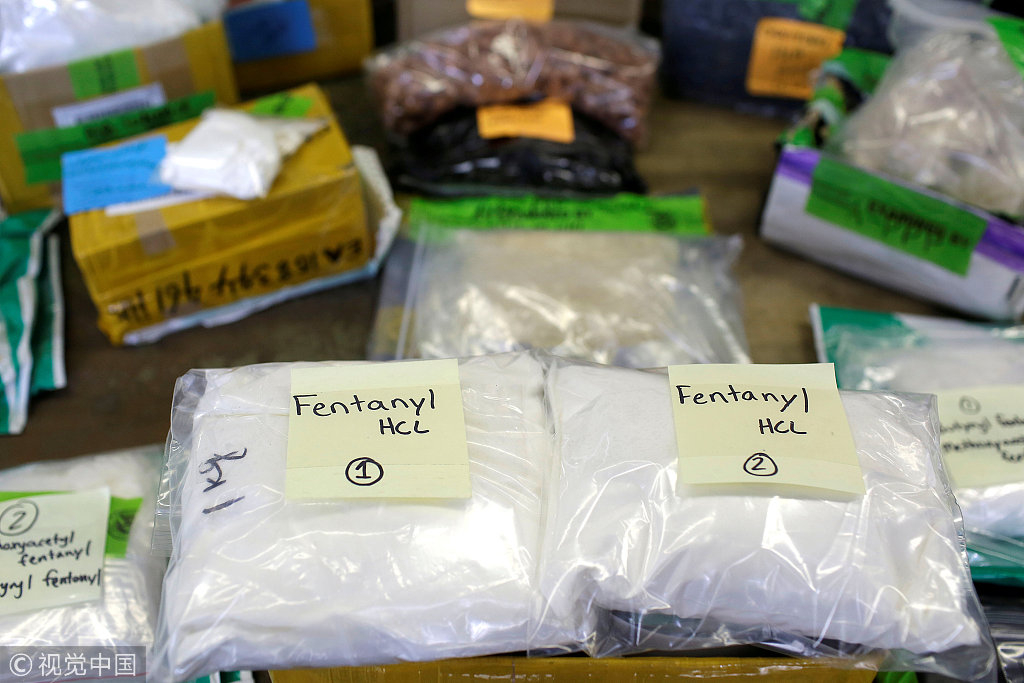 Plastic bags of Fentanyl are displayed on a table at the U.S. Customs and Border Protection area at the International Mail Facility at O'Hare International Airport in Chicago, Illinois, U.S., November 29, 2017. /VCG Photo

Plastic bags of Fentanyl are displayed on a table at the U.S. Customs and Border Protection area at the International Mail Facility at O'Hare International Airport in Chicago, Illinois, U.S., November 29, 2017. /VCG Photo

There are two important innovations in China's control over fentanyl.
One is the introduction of the concept of a class of substances, including all compounds of fentanyl. Chinese regulators say the standard takes into account the impact of the type of chemicals on drugs, industry, and research.
The second is to design a dynamic adjustment mechanism. Chinese regulators said that the scope and method of regulation will be adjusted at any time as the regulatory tools progress, and such drugs can also be legally used under special licenses.
The inclusion of fentanyl in the non-medical catalog means that the drug will not be used as an analgesic, which will significantly reduce the need for such drug. In the case of a narrower use, the production capacity of fentanyl-related chemicals will also lessen, which will reduce the probability of related chemicals entering the market.
Judging from these control rules, China is already at the forefront of control of the drug, and its scope of management has significantly exceeded the standards of the United Nations and the United States. China's efforts to combat the abuse of fentanyl have an important impact on the global control of such new drugs and have also brought lessons and inspiration to similar control in other countries.
Fentanyl is not only a new drug problem in China but also an important topic in Sino-U.S. relations. Since 2017, the U.S. has exerted pressure on China on this issue, arguing that China is the main source of illegal fentanyl inflows.
A few U.S. media outlets said that China may deliberately indulge in the control of such drugs, allowing smugglers to introduce such new drugs into the United States, adding to the burden on the U.S. health system and the labor market. In fact, China has always been the most severe country in the world to crack down on drug-related crimes. The crimes of drug traffickers can reach the death penalty. 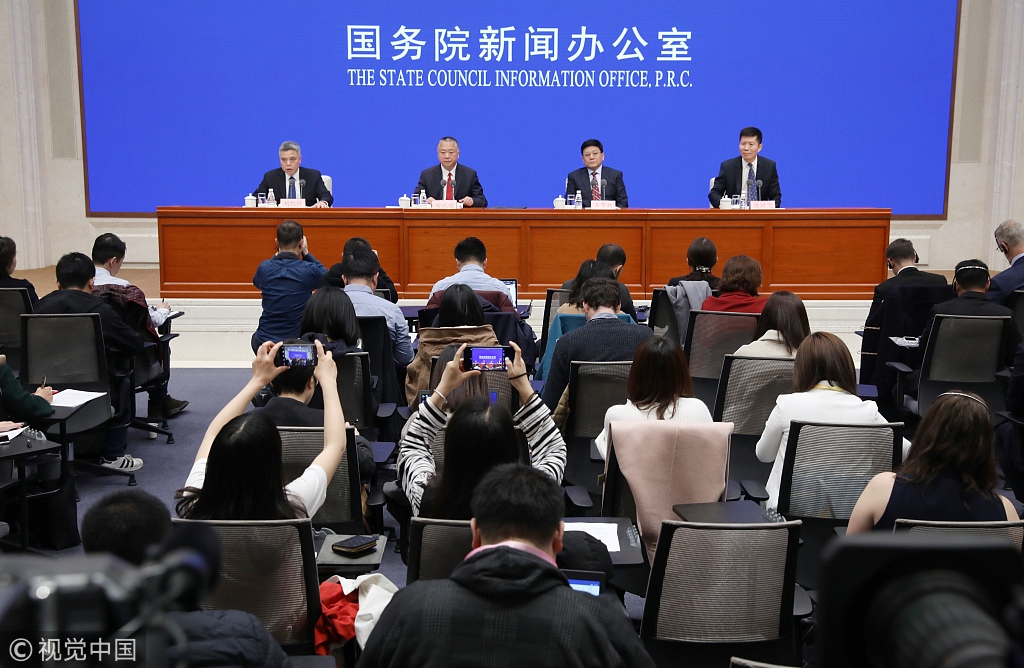 This issue was also one of the important topics for the China-U.S. summit in December 2018. The joint statement of the meeting stated that President Xi  Jinping agreed to designate fentanyl as a controlled substance in a humanitarian consideration, which means that people who sell fentanyl to the U.S. will be subject to the most severe punishments.
After that, the cooperation between China and the U.S. in combating fentanyl made remarkable progress. The U.S. has repeatedly confirmed that the cooperation between the two sides is positive. This time, China's actions show zero tolerance towards the drug problem.
The implementation of new regulations in China does not necessarily fundamentally eliminate the abuse of fentanyl drugs. The threshold for the production of fentanyl drugs is decreasing, and the main production sites are constantly moving.
Drug network operators will look for new, unregulated gray areas for production and smuggle drugs into countries with larger drug markets such as the U.S. and China. The war against drugs did not end, only a new chapter was opened. China and the U.S. should be more active in cooperating on a global scale and try their best to eliminate the regulatory arbitrage space for drug traffickers.
(If you want to contribute and have specific expertise, please contact us at opinions@cgtn.com.)