2018 Reporters' look back: Further instability brewing in the Middle East
By Stephanie Freid 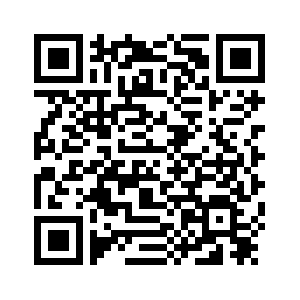 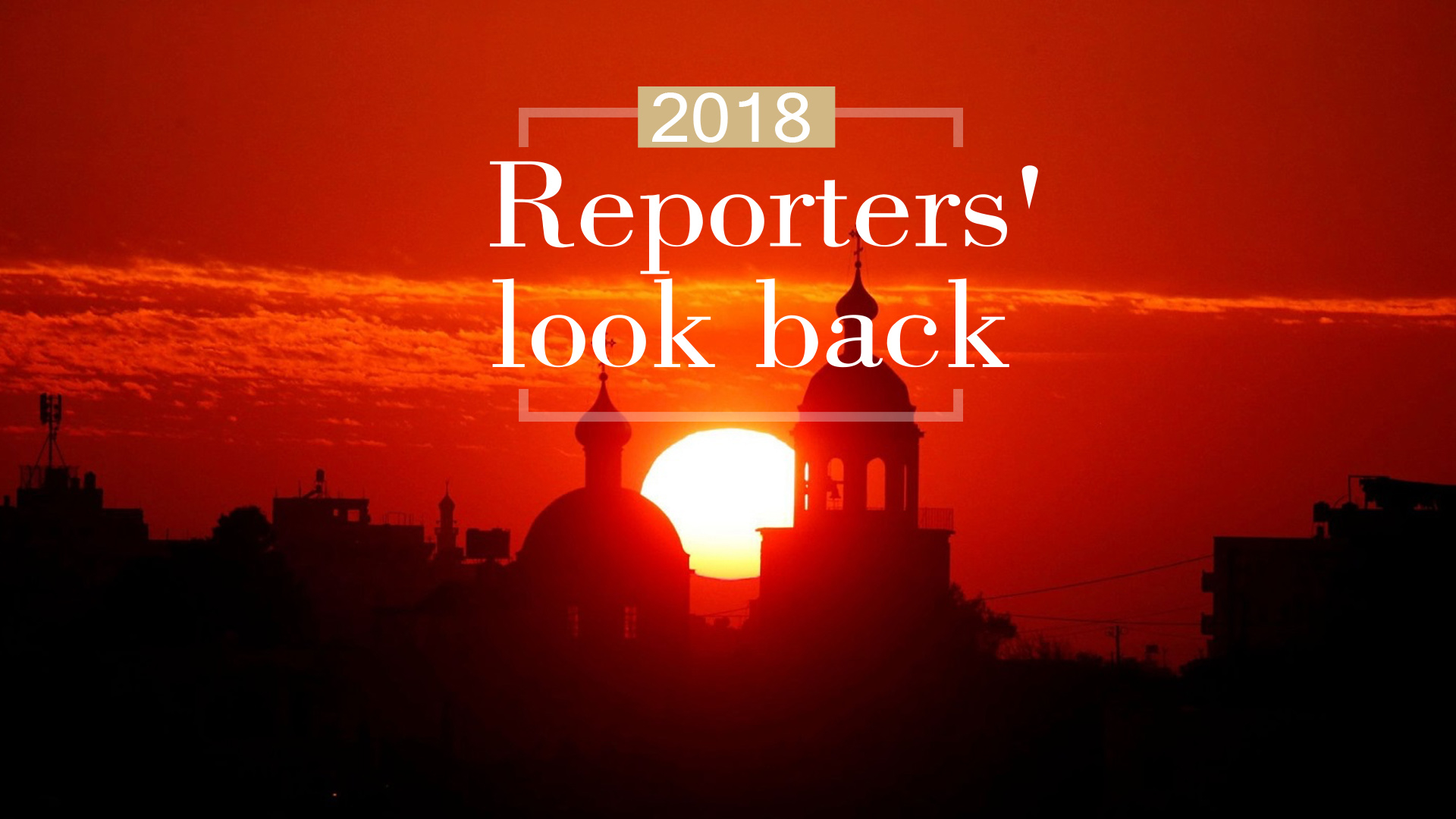 The Middle East had another stirring year in 2018, characterized by wide-spread instability driven by alliances falling along religious lines and affiliations –  like Saudi versus Iran or Shiite versus Sunni camps, while relations between the Israelis and Palestinians showed no sign of improvement.
On battlegrounds in Syria, Yemen and Iraq, aligning with one side or the other has meant a starving civilian population in Yemen, a flood of refugees fleeing homes in Syria and ISIL going underground in Iraq, Turkey and Syria.
Saudi Crown Prince Mohammed Bin Salman, a young leader in his mid-30's previously described as uncharacteristically liberal for legalizing driving for women in the Kingdom and re-opening movie houses, came under fire in 2018 for perpetuating the Yemen campaign and for his suspected role in October targeted assassination in Turkey of Saudi journalist Jamal Khashoggi.
Meanwhile, Iran has gained physical strongholds in the Middle East in 2018 in Iraq, Syria and Lebanon – involving in Israel's government fights in the form of targeting Iranian positions inside Syria. 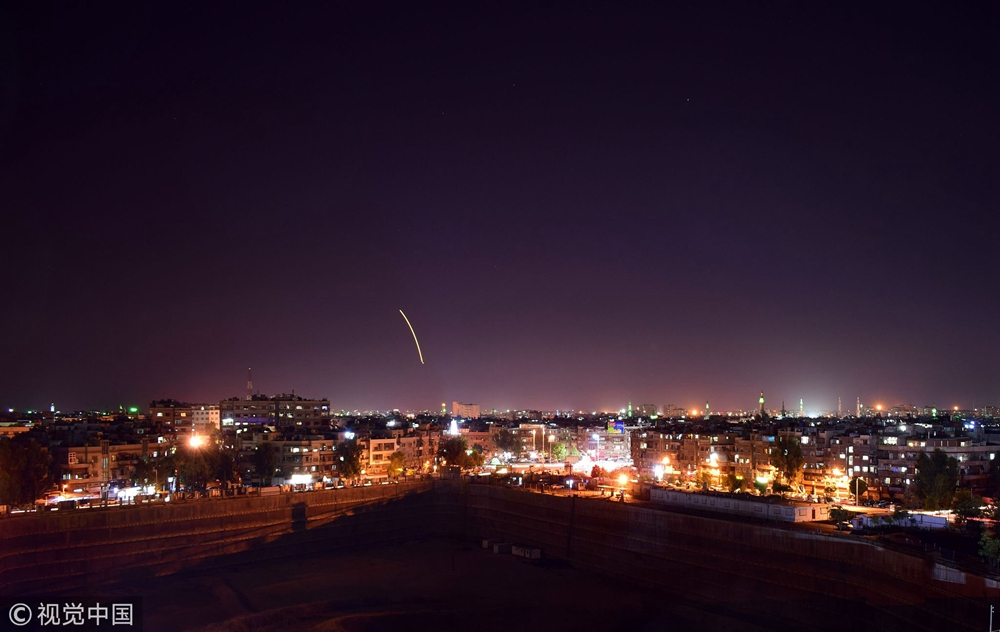 Read more:
Syria's crisis isn't only about Syria
Yemen in the spotlight
There's broad speculation that in 2019, Bin Salman and Israel's Prime Minister Benjamin Netanyahu may publicly acknowledge their behind-the-scenes private relationship in a historic show of peacemaking that may go in favor of the Saudi leader.
Israel, emboldened by a historic U.S. Embassy move to Jerusalem in May, admits to ties with Saudi Arabia and the other Gulf States.
The embassy move – a decision by U.S. President Donald Trump to relocate the United States embassy from Tel Aviv to Jerusalem – outraged the Arab world and reversed decades of U.S. policy.
06:03 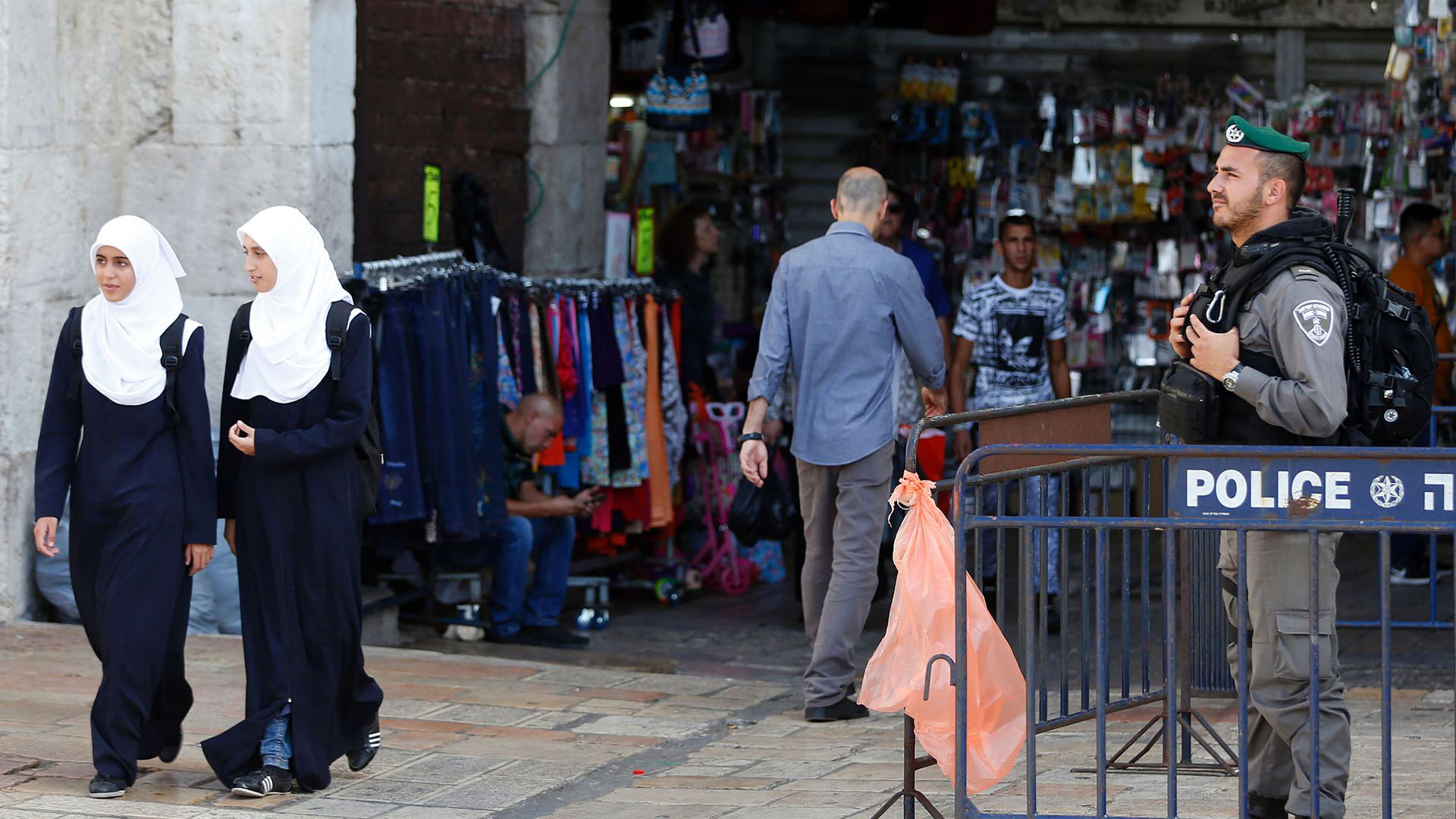 The move represented U.S. recognition of Jerusalem as Israel's capital, which parties who favor a negotiated peace deal between Israelis and Palestinians say is reckless and unfairly in favor of Israel.
The embassy move spurred violent protests in Israel, the Palestinian territories and across the Arab world. 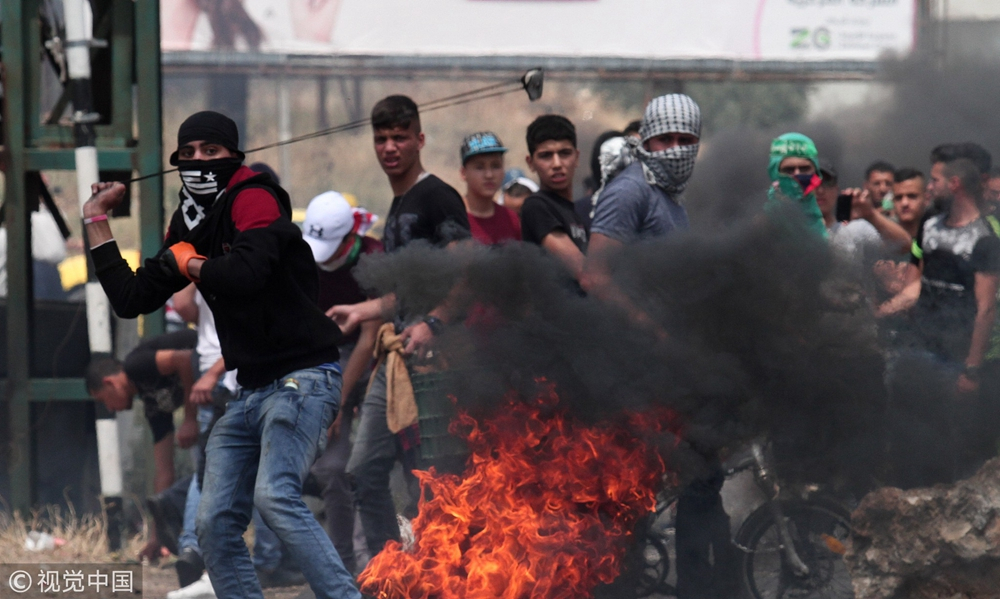 Palestinian protestors burn tyres and throw rocks with slingshots during a protest against the United States' plans to relocate the U.S. Embassy from Tel Aviv to Jerusalem in the West Bank, May 15, 2018. /VCG Photo

Palestinian protestors burn tyres and throw rocks with slingshots during a protest against the United States' plans to relocate the U.S. Embassy from Tel Aviv to Jerusalem in the West Bank, May 15, 2018. /VCG Photo

Palestinians who view East Jerusalem as the capital of their future state were isolated by the move and by a 500 million U.S. dollar funding cut to Palestinian refugees.
Ahed Tamimi was the iconic figure for the Palestinians in 2018. As video of her slapping an Israeli soldier went viral, she became a symbol of strength and self-determination to Palestinians amidst another year without progress towards independence.
"Facing that soldier and expressing my rejection of him, my rejection of the occupation. It was worth a lot," she said. "I have no regrets for the eight months I spent in jail or for slapping a soldier or for anything."
Tamimi is no accidental icon. After decades of stagnation, her actions spurred dialogue about the gaping divide between Palestinians and Israelis while reviving dormant hope on both sides for resolution.
In Gaza, protests that started last spring against Israel's land, sea and air blockades are ongoing. 170 Palestinians have been killed and almost 10,000 injured during weekly demonstrations – mostly by Israel army live ammunition.
Thousands of acres of forest and crops in Israel have been incinerated by flaming devices sailed across from Gaza. 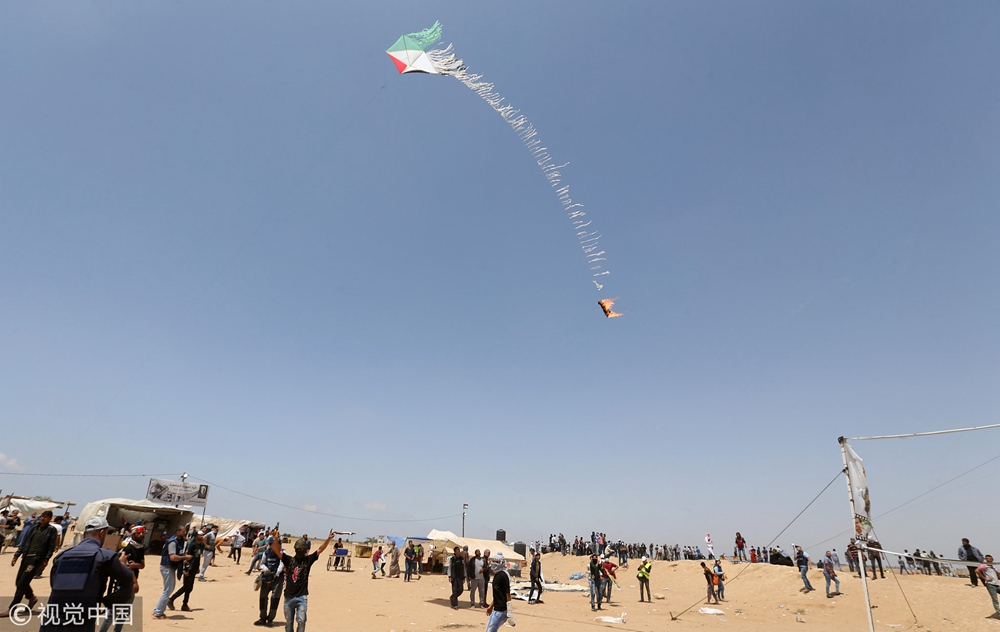 Palestinian demonstrators fly a flaming kite to be thrown at the Israeli side during a protest at the Israel-Gaza border in the southern Gaza Strip, May 11, 2018. /VCG Photo

Palestinian demonstrators fly a flaming kite to be thrown at the Israeli side during a protest at the Israel-Gaza border in the southern Gaza Strip, May 11, 2018. /VCG Photo

Gaza and Israel tried to work out a long-term ceasefire deal during the year, but a November escalation threatened to descend into full-scale engagement.
"The Israeli prime minister said that he doesn't want to be occupied in a military campaign in the Gaza Strip, because he wants to be able to devote all the efforts and to concentrate on the northern arena," said Koby Michael, a Middle East analyst from Israel National Security Institute.
Syria and Lebanon continued presenting Israel with military challenges. Israel's intelligence reports that Iran's influence and hardware are expanding in both countries.
In 2018, as in the past, local events were influenced and sometimes controlled by regional and international players who have a definite interest in what happens here.
As 2018 became history, Israel's government is dismantling, and the Palestinian Authority faces an uncertain future as the threat of radical takeover looms.
(Top image: The last sunset of 2018 seen in the West Bank town of Hebron, December 31, 2018. /VCG Photo)