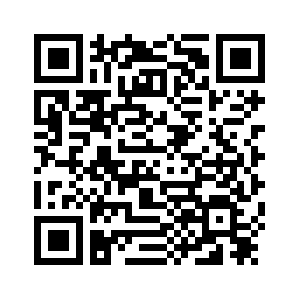 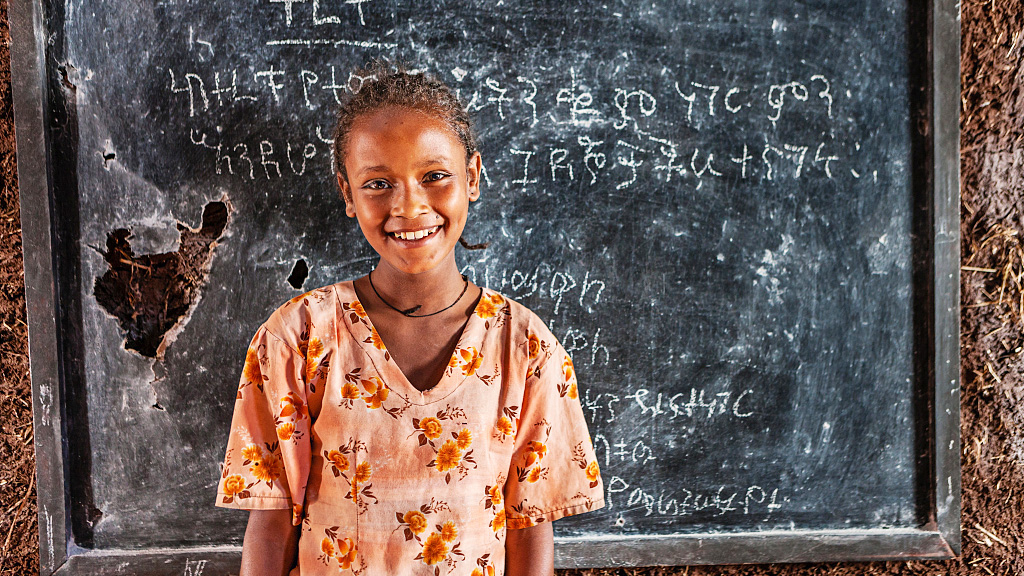 "When a language disappears, the community and, in turn, the world, loses generations of knowledge that have been preserved," said Kristen Tcherneshoff, who works at Wikitongues as the director of Community, a New York-based non-profit organization focused on language preservation.
"Language is the artistic, intellectual, and spiritual expression of the full complexity and diversity of the human experience," she told CGTN.
February 21 marks the International Mother Language Day, celebrated this year under the theme "Indigenous languages matter for development, peacebuilding and reconciliation."
The day aims at promoting the preservation and protection of languages amid increased threat to linguistic diversity.
According to UNESCO statistics, around 40 percent of the estimated 7,000 languages around the world are endangered, most of which are indigenous languages. 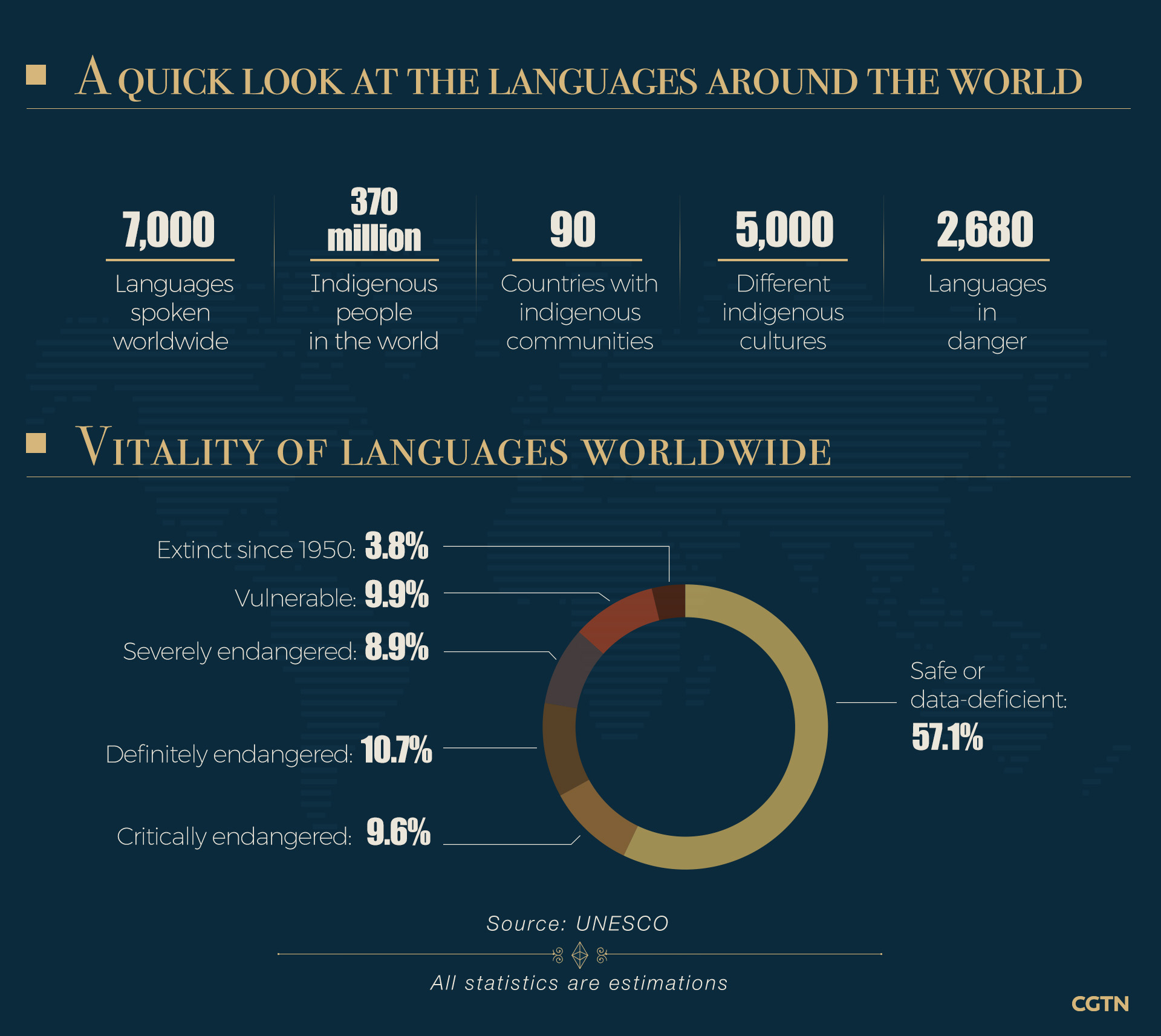 Furthermore, one language disappears every two weeks, together with its entire cultural and intellectual heritage.
Some linguists hold the view that nearly half of the world's current stock of languages may disappear within the next century.
In order to bring the issue to light, the UN officially launched The Year of Indigenous Languages on February 1 this year.
"Each indigenous language has an incalculable value for humankind," said UN General Assembly President María Fernanda Espinosa Garcés at the event. "They are much more than tools for communication, they are channels for human legacies to be handed down." 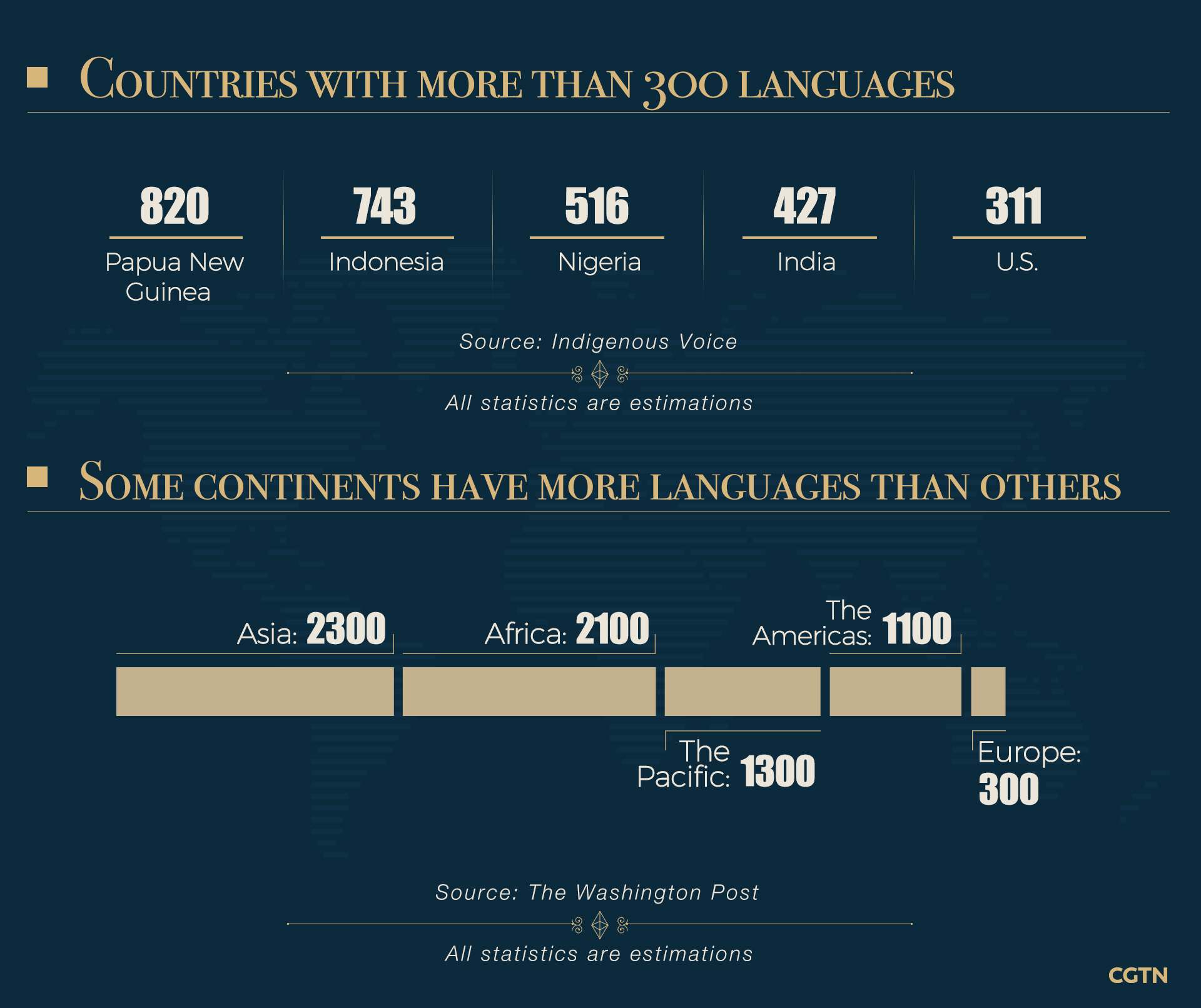 A language is closely related to its unique culture

Polyglots can relate to the struggle sometimes of not being able to find two words in two different languages that would mean the exact same thing.
Tuvan, one of the many small languages used in Russia, has a unique word "khoj özeeri" (a local method of killing a sheep), which is untranslatable into English or Russian. Slaughtering livestock can be part of human communities' evolving culture, and "khoj özeeri" is one of its unique versions.
Different languages highlight various human interpretations and perceptions of the world. Members of the Amazonian tribe Pirahã only use words like "few" or "many" instead of numerical terms, which indicates that assigning numbers may be a cultural product rather than an innate preference. 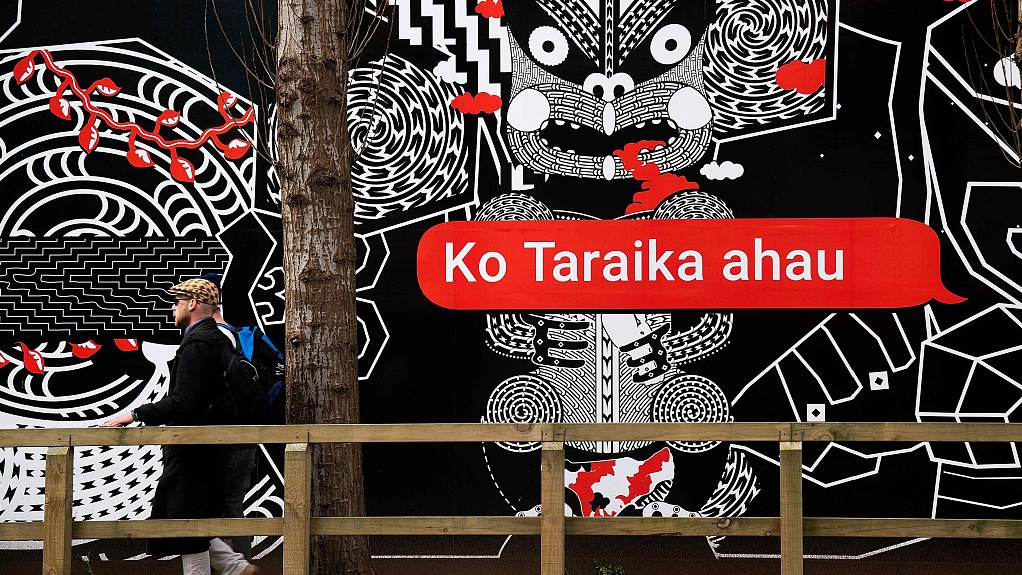 Reasons to save endangered languages

We all have our own ways to describe what we see, but can you imagine what would happen if the language we speak every day out of a sudden disappeared?
For languages like Aka, spoken by people from a remote state in northeastern India, the death of their language shook the fundamental foundations of the tribe. As one villager put it, Aka represents their identities.
When asked why we need to protect endangered languages, Dr Lisa Lim, associate professor in linguistics at the University of Sydney and honorary associate professor in the School of English at the University of Hong Kong, told CGTN that languages (including traditional storytelling and songs) are a central part of intangible cultural heritage.
"A lot of traditional ecological knowledge (TEK) is embodied or conveyed through indigenous languages," Lim said, giving Tanka boat-dwellers in Hong Kong as an example. Their language and songs convey their intimate knowledge of the ecology of the sea, such as fish species, and fishing.
Tcherneshoff thinks that a language is a tool to share our thoughts, beliefs, and emotions, yet it encompasses much more: It is a cultural expression, an archive of knowledge.
When a language dies, it could take away all memories related to it. 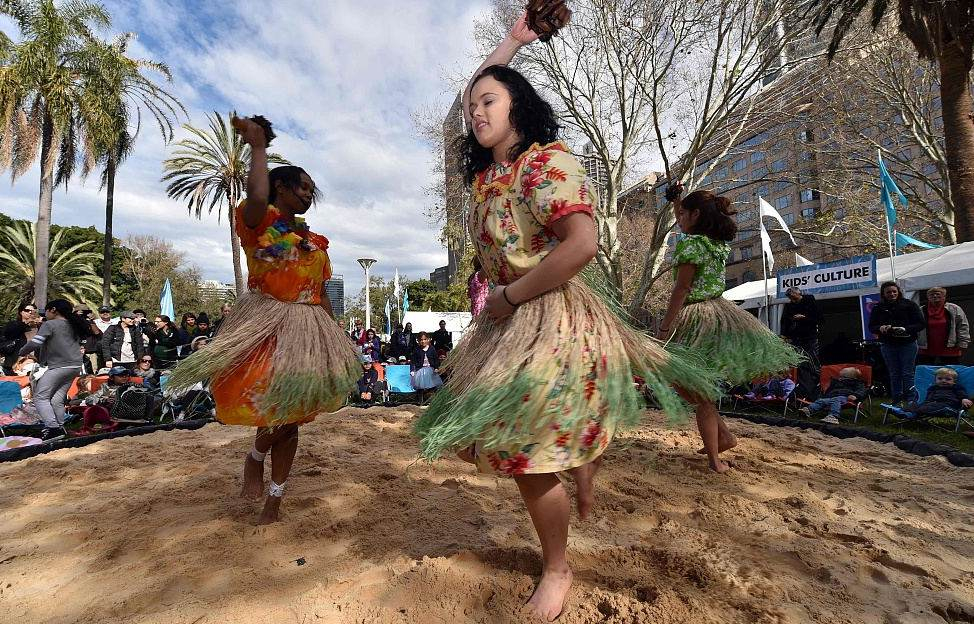 What can we do to preserve 'ancestral tongues'?

Why does a language become endangered or even vanish? Some languages disappear with the death of their last speaker, while others gradually disappear in bilingual or multilingual cultures as indigenous tongues take the back seat at school and on television. Another reason could be the lack of written form for some languages, which are difficult to preserve but easily forgotten.
Last but not least, an increasingly globalized and connected world makes languages characteristics of remote places no longer protected by national borders or natural boundaries. For better communication and better development, we start to learn and use a widespread language like English.
The trend of globalization is unstoppable, but what can we do?
Dr. Lim says we need to find a way for such indigenous languages to have not only cultural and symbolic and social dimensions, but also find the capital that would help their survival. 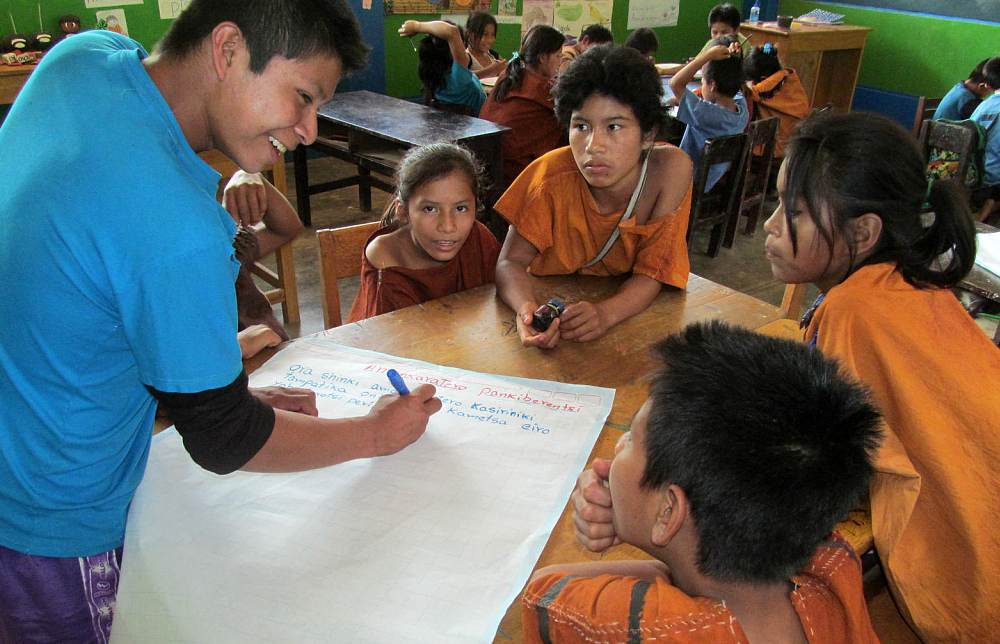 Children participate in activities designed to practice their native language to ensure the continuity of cultural heritage in Tingo Maria, Peru. /VCG Photo

Children participate in activities designed to practice their native language to ensure the continuity of cultural heritage in Tingo Maria, Peru. /VCG Photo

When talking about the difficulties of her organization, Tcherneshoff said: "The main issue we encounter is funding."
Wikitongues is a non-profit organization that aims to build a public archive of every language in the world. They have thousands of volunteers from all over the world.
She shared a story of a volunteer from the Democratic Republic of Congo named Hangi who insists on recording videos of his mother tongue Kihunde even when it is difficult to access the Internet. He is also currently working on a phrasebook in Kihunde and has begun translating classical poetry works into Kihunde.
Tcherneshoff suggests that anyone can contribute by researching the area where they are from. "What languages are indigenous to the region? Are they still in use, or are they inactive?"
Lim and Tcherneshoff both agree that social media is a successful tool in language preservation nowadays.
"Such platforms make the language relevant for our world today – not only a language for 'traditional' topics or rituals – with new vocabulary being developed, and making it attractive for young people to use, which is a key to maintaining a language," Dr. Lim said. 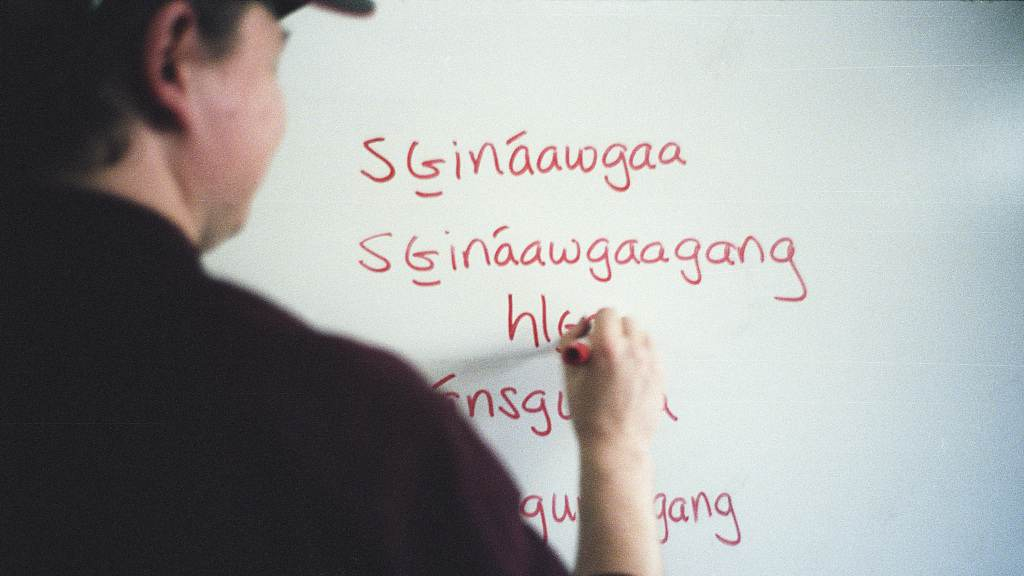 The diversity of languages is threatened, but luckily, people are taking action.
An organization like Wikitongues count on volunteers to save languages. There are young language activists who create new generations of language learners through mobile apps in the form of games and dictionaries.
Governments are participating as well. Canada passed the Indigenous Languages bill earlier this month, several universities in the U.S. have started offering courses in Native American languages, indigenous children in 181 of India's state primary schools will have access to literacy education in their own languages.
China is also doing its share. In January, UNESCO officially announced the Yuelu Proclamation on the protection of linguistic diversity, which was discussed and passed at an international conference held in the city of Changsha last year. China also has a language project in place to preserve its various dialects.
Some languages are vanishing, but the future lies in our hands. Every one of us can make a difference. Like Tcherneshoff says, maybe we should move forward optimistically.
(Cover photo: An African little girl learns the Amharic language. /VCG Photo)
(Video by UNESCO's Year of International Indigenous Languages Program)