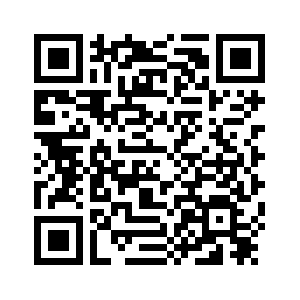 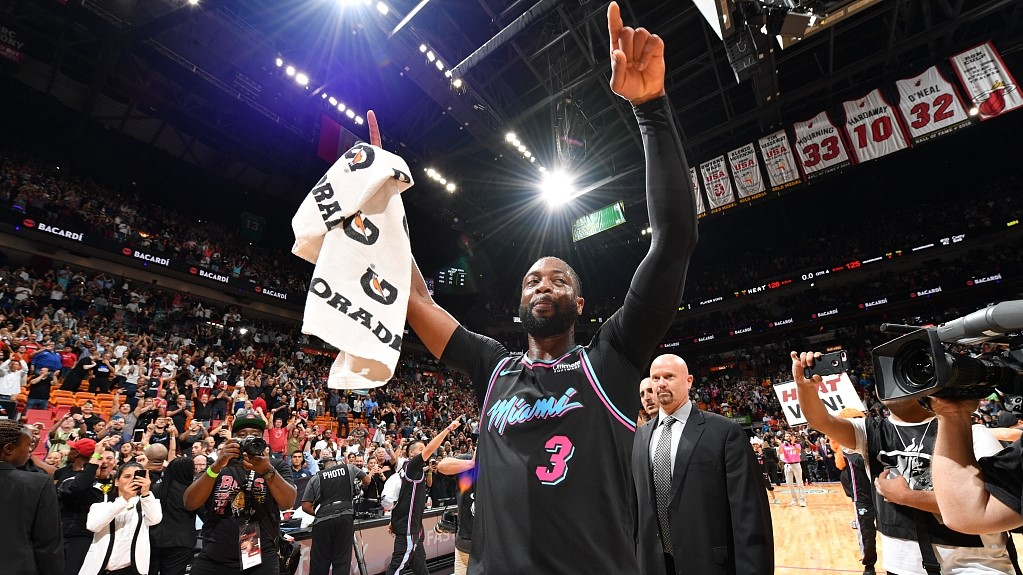 Dwyane Wade on Wednesday made the south coast shine by helping the Miami Heat defeat visiting Golden State Warriors 126-125 with a three-pointer at the buzzer during the 2018-19 NBA regular season.

Wade did it again, 10 years on 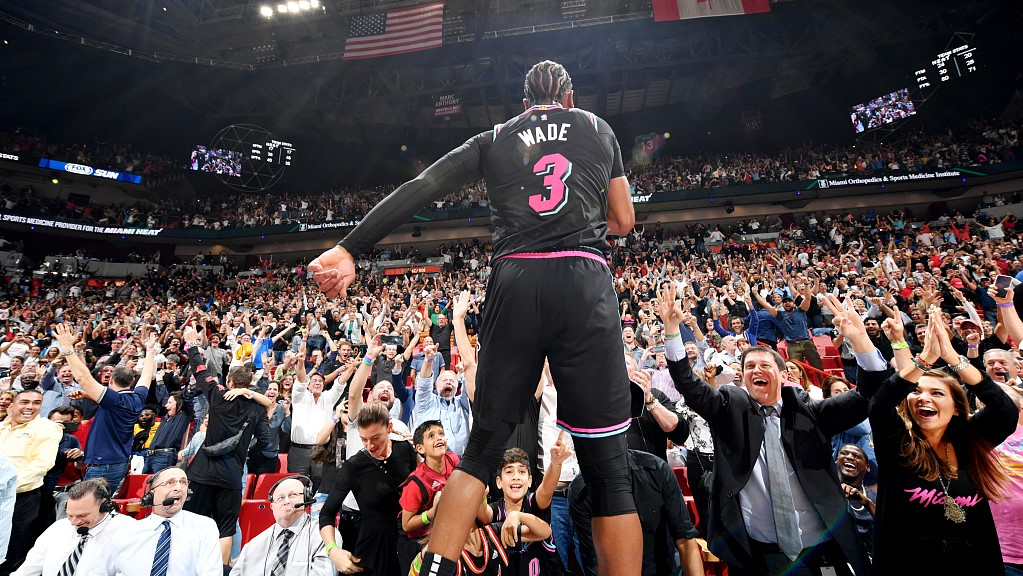 Dwyane Wade of the Miami Heat stands on the scorer's table after helping his team defeat the Golden State Warriors 126-125, February 27, 2019. /VCG Photo

Dwyane Wade of the Miami Heat stands on the scorer's table after helping his team defeat the Golden State Warriors 126-125, February 27, 2019. /VCG Photo

Miami's two highest scores both came from their bench: 27 points by Goran Dragic and 25 by Wade. Four of the team's first line-up scored double-digit points: Josh Richardson had 21 points, five rebounds and five assists. Kelly Olynik and Justise Winslow dropped respectively 15 and 12 points. Bam Adebayo got a double-double of 11 points and 10 rebounds.
Klay Thompson shot down the court's highest 36 points for Golden State. Kevin Durant had 29 points, five rebounds and five assists while Stephen Curry scored 24 points but neither managed to file goal rates better than 50 percent. Jordan Bell was the only reset player on the team to score double digits (10 points). 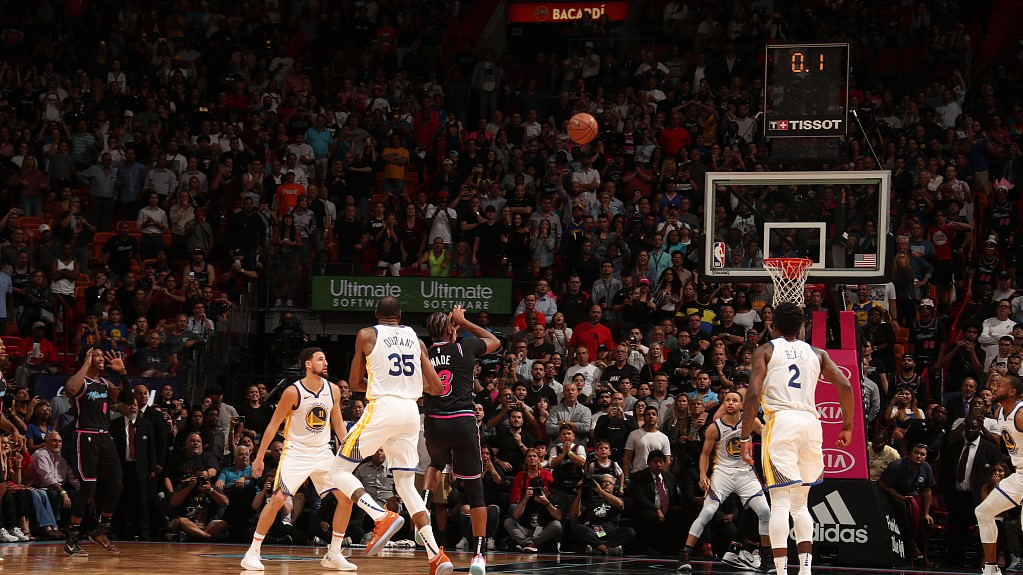 Dwyane Wade #3 of the Heat shoots the 3-pt buzzer beater in the game against the Warriors, February 27. /VCG Photo

Dwyane Wade #3 of the Heat shoots the 3-pt buzzer beater in the game against the Warriors, February 27. /VCG Photo

As one the NBA's top five shooting guards in history, Wade almost had no weakness in offense except three-pointers, although if he needed to, he could hurt from the 3-pt line.
The 37-year-old Flash first sank his fourth three-pointer in the game to narrow the score down to 124-123 for the Heat.
Then there came Wednesday's best highlight: Wade first dodged Durant's block with a feint, but he was denied by Bell. However, Wade managed to shoot again and his shot became the game-winning buzzer beater.
Having confirmed that the three-pointer is counted, Wade jumped onto the scorer's table, just like he did in 2009 when he sunk the Chicago Bulls at home with a 3-pt buzzer beater and yelled: "This is my house!"
"It was definitely one of my toughest game-winners that I've hit. I remember many years ago when Kobe (Bryant) hit that game-winner on me in LA at the top of the key off the glass, and I couldn't understand how he could bank a 3 off the top of the key like that. Same thing. It doesn't make sense, but this definitely is special, especially in my last year. To be able to have special moments," said Wade in a post-game interview.
As for the Warriors, Wednesday's game was just another unacceptable loss.
Miami had lost six straight home games prior to Wednesday's match and they did not even have a starting point-guard as Winslow had to be the orchestrator. However, none of this stopped the team from leading by at most 24 points (69-45) in the game. It's true that GSW managed to catch up at last but that's not how a dynasty team should perform in a game.

Boston need to do something about their offense 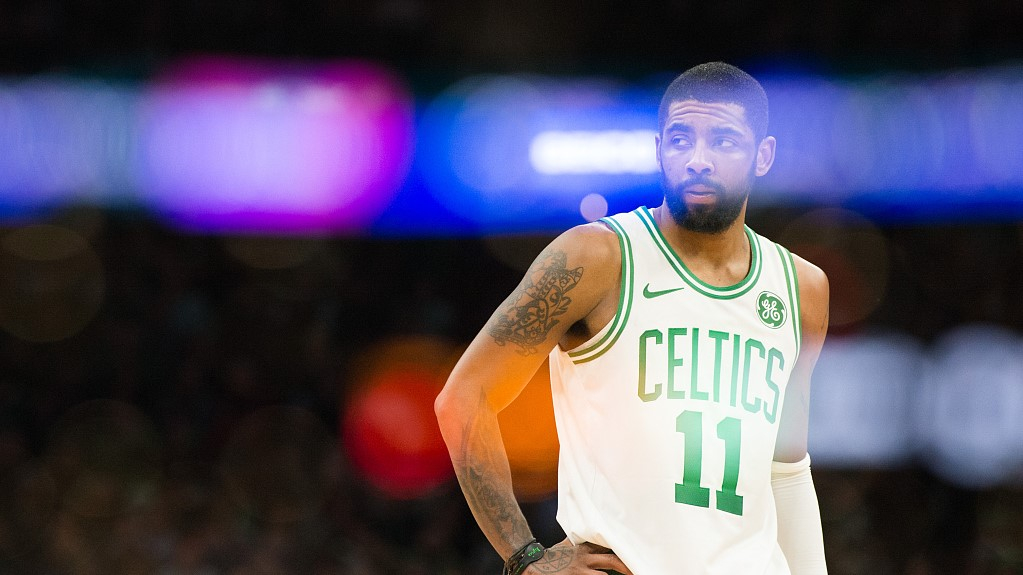 Kyrie Irving of the Boston Celtcis in the game they lose to the Portland Trail Blazers 97-92, February 27, 2019. /VCG Photo

Kyrie Irving of the Boston Celtcis in the game they lose to the Portland Trail Blazers 97-92, February 27, 2019. /VCG Photo

The Boston Celtics lost their fourth game in a row after they were beaten by the Portland Trail Blazers 97-92 at the Moda Center. Losing by five points is not a tragedy but the Celtics have to face up to their terrible offense.
Kyrie Irving scored the team's best 31 points but their second highest score was less than half – 14 points – from Jayson Tatum.
Noteworthy is that everyone on the team performed selflessly and was willing to make that extra pass. However, the point of passing the ball is to find a teammate with a better chance at shooting, not because a player is afraid of taking the shot.
Boston lacked players who could penetrate their rivals' defense to create open shots for their teammates.
Irving was doing his best but as long as Tatum, Hayward and others could not make those shots or even try to, Irving had to take on more defense which he could not handle owing to his size and play style. Defense could help a team win in the playoffs but no team could win without scoring.
Wednesday's victory was the fifth consecutive one for Portland thanks to Damian Lillard's 33 points. The team currently ranks No.4 in the West, with two wins above the No.5 Houston Rockets and only 0.5 win behind the No.3 Oklahoma City Thunder.

Lakers and Pelicans are both pathetic 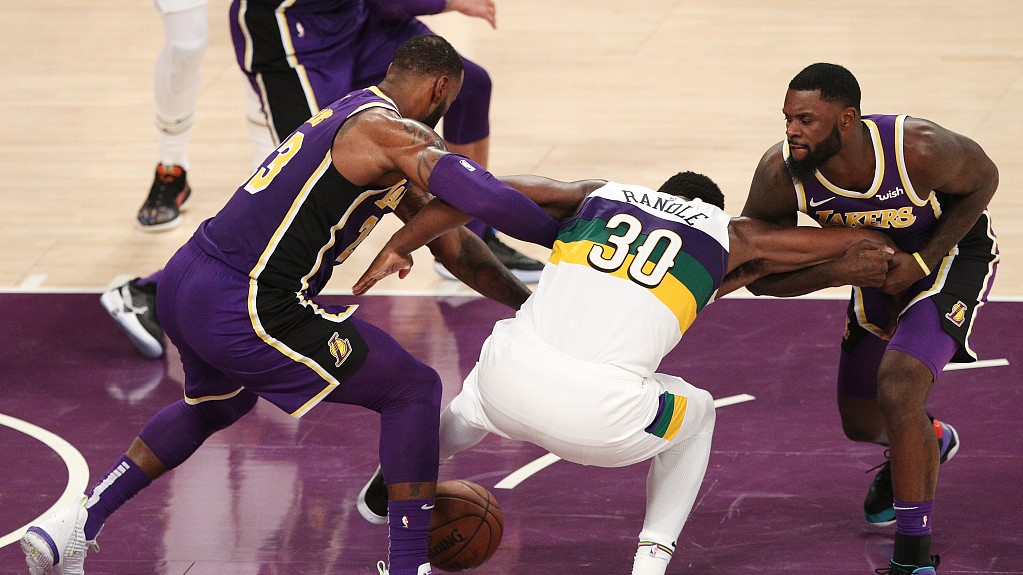 LeBron James (L) and Lance Stephenson (R) of the Los Angeles Lakers compete for the ball with Julius Randle (C) of the New Orleans Pelicans in the game, February 27, 2019. /VCG Photo

LeBron James (L) and Lance Stephenson (R) of the Los Angeles Lakers compete for the ball with Julius Randle (C) of the New Orleans Pelicans in the game, February 27, 2019. /VCG Photo

The Los Angeles Lakers finally claimed a win by defeating the New Orleans Pelicans 125-119 to remain hopeful for the playoffs. They were one win behind the No.9 Sacramento Kings and three wins away from the No.8 Los Angeles Clippers. However, the victory was not very convincing because most of the team's players did not show much passion, especially in defense, on the court.
Truth is, the purple and gold won because the Pelicans played worse.
New Orleans sent Anthony Davis to the court because the NBA threatened to fine them if the team did not let him play without a good reason. However, during his time in the game, Davis tried to avoid physical confrontation and obviously was not interested in defense. This was understandable since his relation with the Pelicans was already broken after the team refused to trade him. The only thing Davis cared about was to avoid injury. 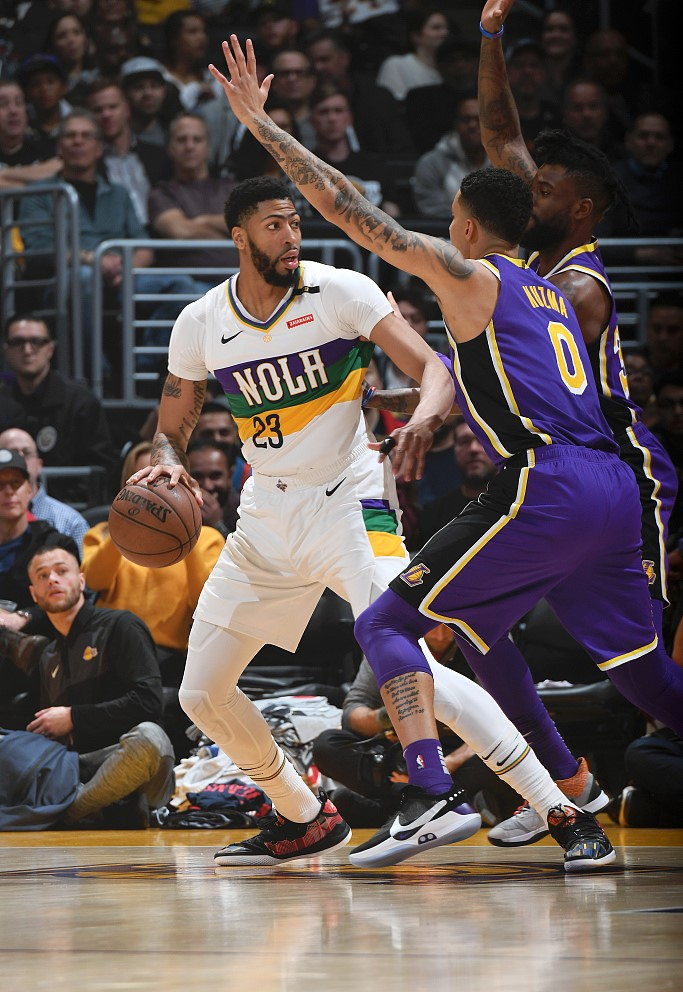 Anthony Davis #23 of the Pelicans handles the ball under defense in the game against the Lakers, February 27, 2019. /VCG Photo

Anthony Davis #23 of the Pelicans handles the ball under defense in the game against the Lakers, February 27, 2019. /VCG Photo

Part of the Lakers' problem came from Davis, too.
From the moment the team's young men knew that they were disposable in the pursuit to get Davis, they lost motivation to play hard. LeBron James should also be held responsible because he kept blaming his teammates for not defending well via negative body language and gestures during the course of the game only to forget that he was actually not delivering in this area.
The Pelicans could still count on the trade value of Davis and a possible high-ranking draft pick in 2019 summer.
By contrast, the Lakers are in a very awkward situation: Even if the team enters the playoffs, it's hard to imagine that they can cause a stir. It's also too late form them to consider tanking. Moreover, after what happened to Paul George, the team should ditch their blind confidence that everyone wanted to join the purple and gold or James.
Other games on Wednesday included: (away teams come first)
Houston Rockets 118-113 Charlotte Hornets
Minnesota Timberwolves 123-131 Atlanta Hawks
Washington Wizards 125-116 Brooklyn Nets
Chicago Bulls 109-107 Memphis Grizzlies
Detroit Pistons 93-105 San Antonio Spurs
Indiana Pacers 101-110 Dallas Mavericks
Los Angeles Clippers 105-111 Utah Jazz
Milwaukee Bucks 141-140 Sacramento Kings