Microchip implants in Europe raise concerns
By Alan B. Goodman 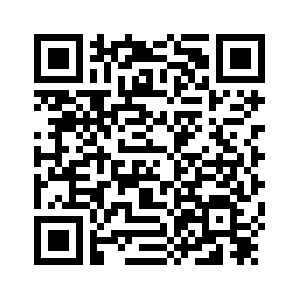 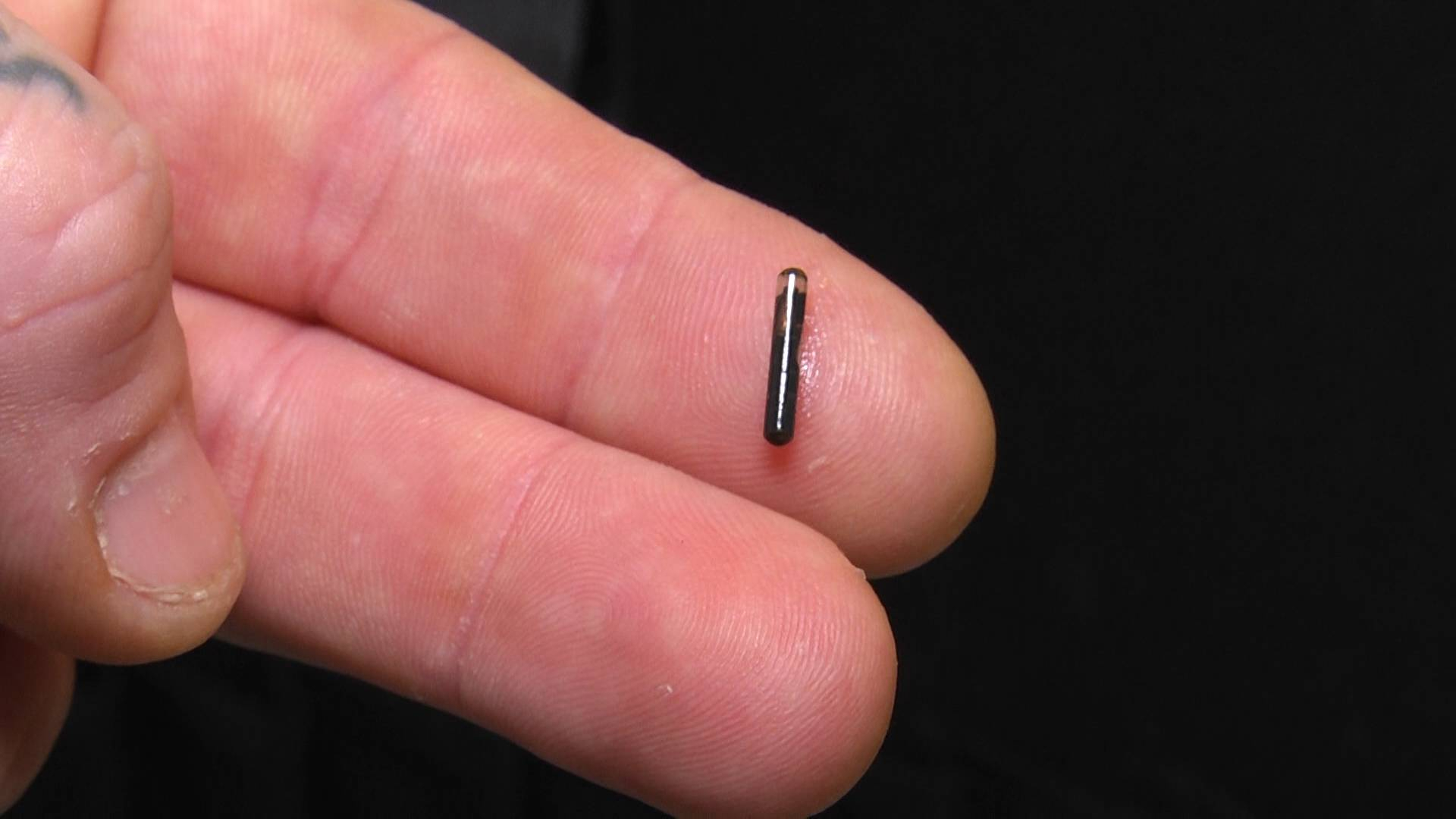 We met the founder of what is considered as a leading European microchip implant firm at a work center in the southern Swedish city of Helsingborg.
Jowan Osterlund, the man behind Biohax International, said it's still a small operation that he can use a work center next to a university. 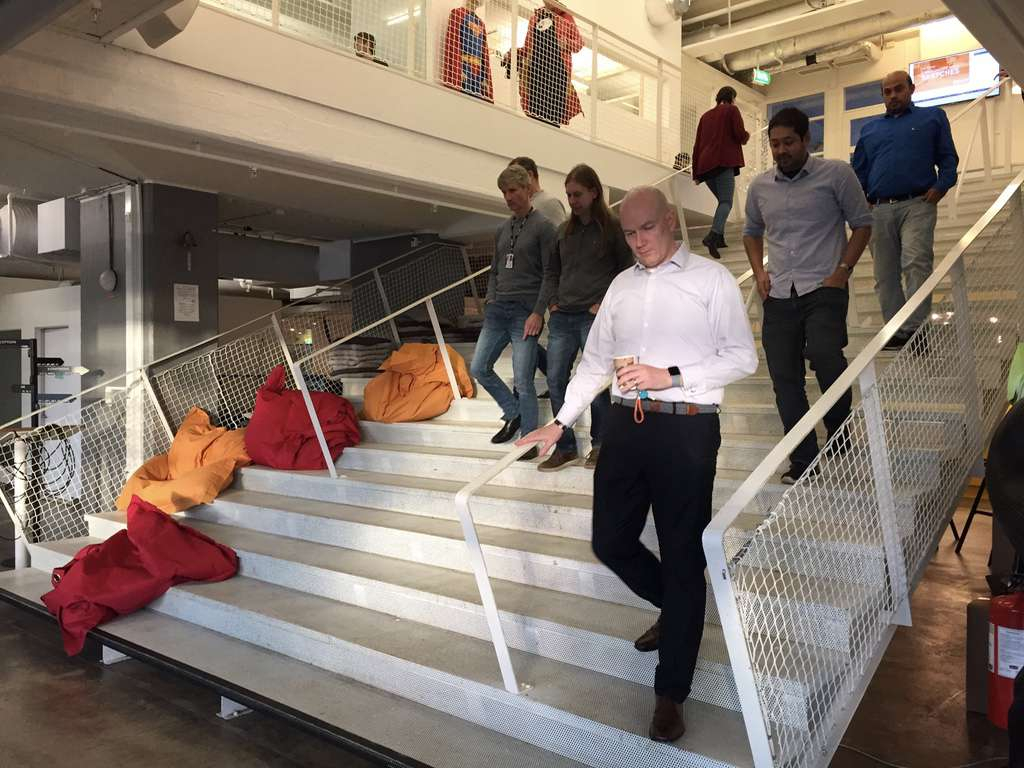 He comes bounding into the building, filled with local entrepreneurs and students, goes upstairs and sticks out his hand as he approaches his locked office door. It opens, because just under his skin is a microchip implant.
The data on it unlocks the door, so he doesn't need to swipe an ID card to gain access.
"It's happening now, so it's the present and the future. This is definitely the next step in technology," he said about the chips.
Osterlund is a tall muscular man who sports numerous tattoos. Before getting into the microchip implant business a few years ago, he worked for years in the piercing sector. He said he's comfortable installing, or now, implanting things on the human body. He has four chips in his own body, just under the skin of his hands and an arm.
"When you stop worrying about keys and cards, you behave in a new way." 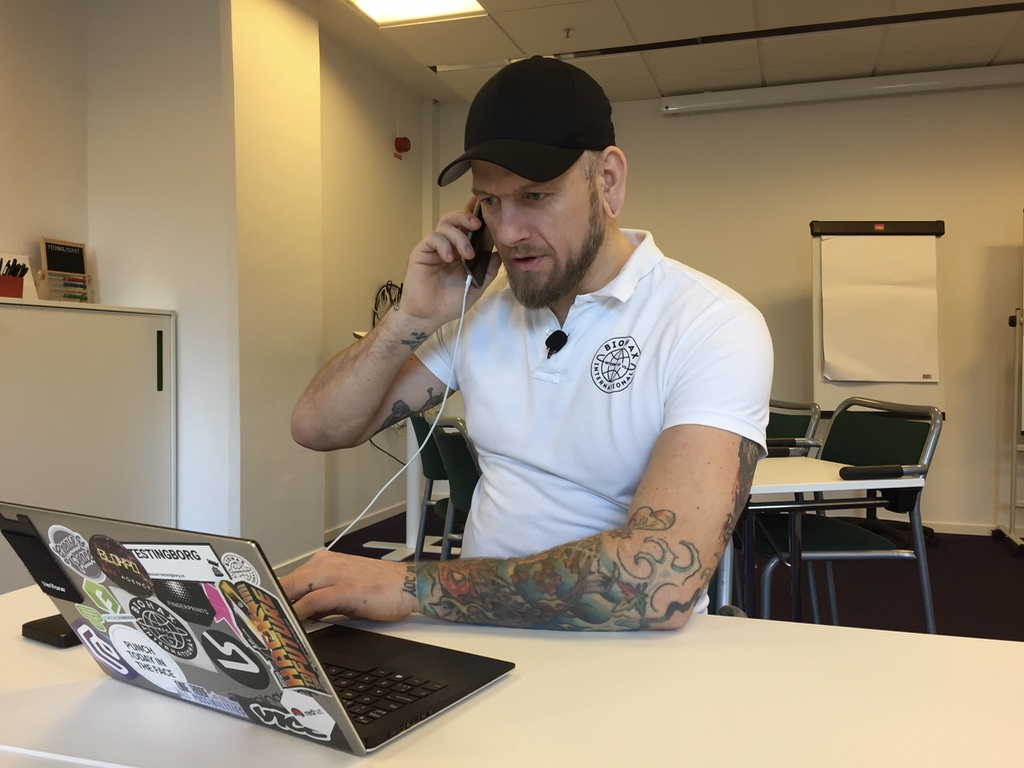 The chips are made in Shenzhen, south China. He won't name the manufacturer but said he wants to switch production to Sweden.
In the past few years, Osterlund said he has personally implanted 4,000 microchips on people in Sweden and about 100 more in the UK.
He carries a small suitcase filled with syringes loaded with chip implants. He said he creates a sterile field, gently squeezes the skin on the hand between the thumb and index finger, presses forward with the syringe, and that inserts a small, narrow, cylindrical microchip, just under the skin. The cost is 180 U.S. dollars per implant.
The Stockholm office of the global tourism company, TUI, has been using Biohax's chip implants for about a year. It started with the most senior executives at the office, Adam Gyorki, the company's spokesperson, told CGTN, and now a hundred employees use it, or about 20 percent of the staff.
One of them is web data specialist Marianne Stjernvall. She opens doors with it and buys food at the company cafeteria, also just by waving her hand. She said the chip doesn't hurt inside of her and she really doesn't think about it. 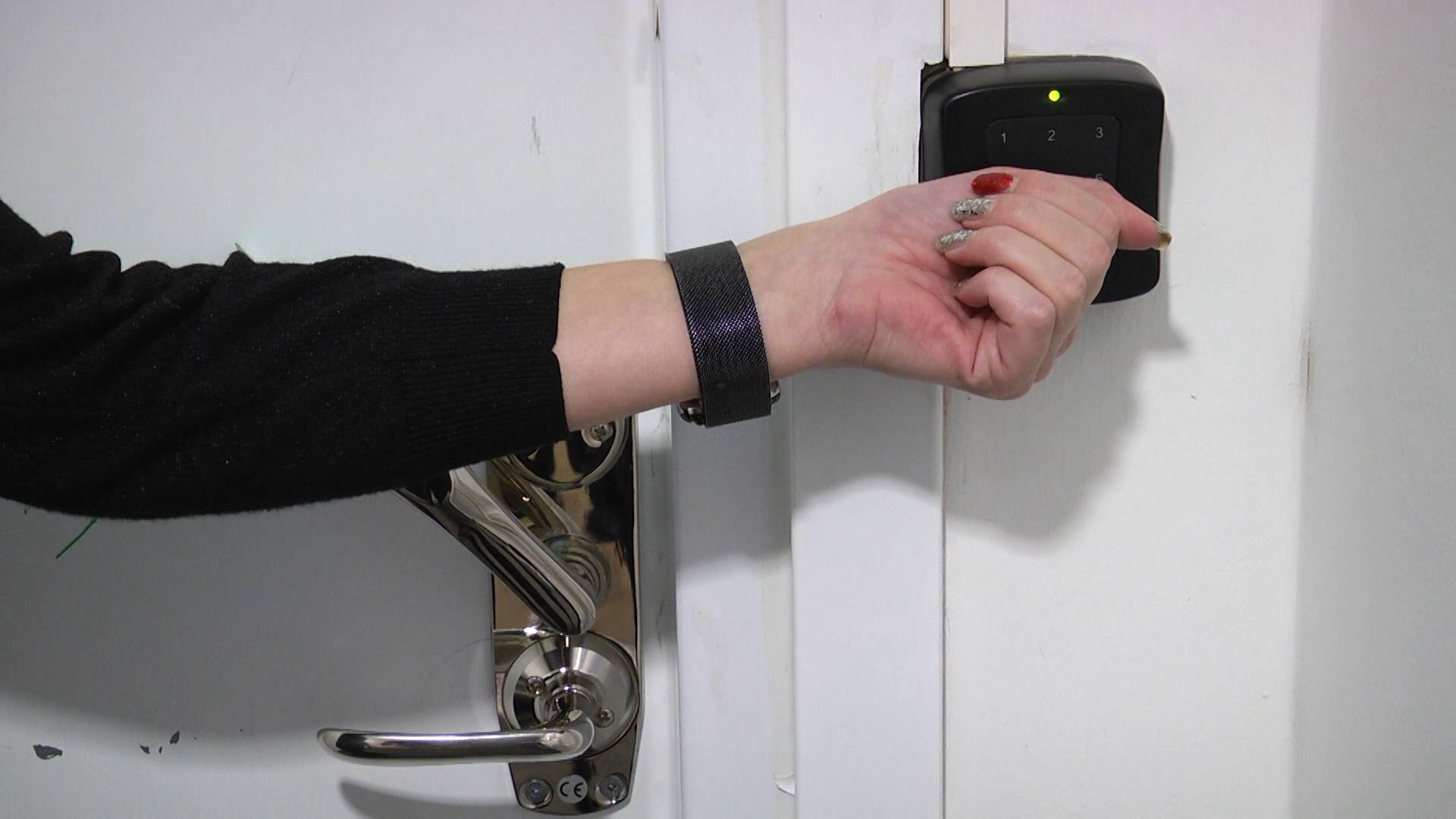 But across Europe, a debate is starting about these chips. In the UK, media reports said the largest employer organization and the umbrella group for trade unions have voiced concern about microchip implants.
In Stockholm, Professor Sven Ove Hansson of Sweden's Royal Institute of Technology, urged caution, saying, "We have seen quite a few cases of problems with implants where they have had negative health effects, for instance, with breast implants."

Osterlund welcomes the debate and said the tiny glass-sealed chips, with the tech information inside, have been used safely for years as transponders in cats, dogs, and horses.
The second concern is about privacy and security issues that the chip may present.
"It's going to be extremely hard for anyone to control it. It's never going to happen, for any company to make it mandatory," said Osterlund.
But Professor Hansson is skeptical. "If there is something that you as an employee would need to carry with you, then you carry it with you. There is no need to implant it on your body."
Both Osterlund and Hansson concur that regulations are needed for this fledgling industry to enhance safety and protections.
At TUI, spokesman Gyorki said the company's Stockholm office is the Nordic headquarters for surrounding countries and it's the first office anywhere for TUI, which has 65,000 employees worldwide, to try chip implants.
The company wants "an innovation and technology mindset" among its staff and is looking at a range of new technologies, including artificial intelligence, Gyorki said.
"But it doesn't mean we would use all of this technology," he added. 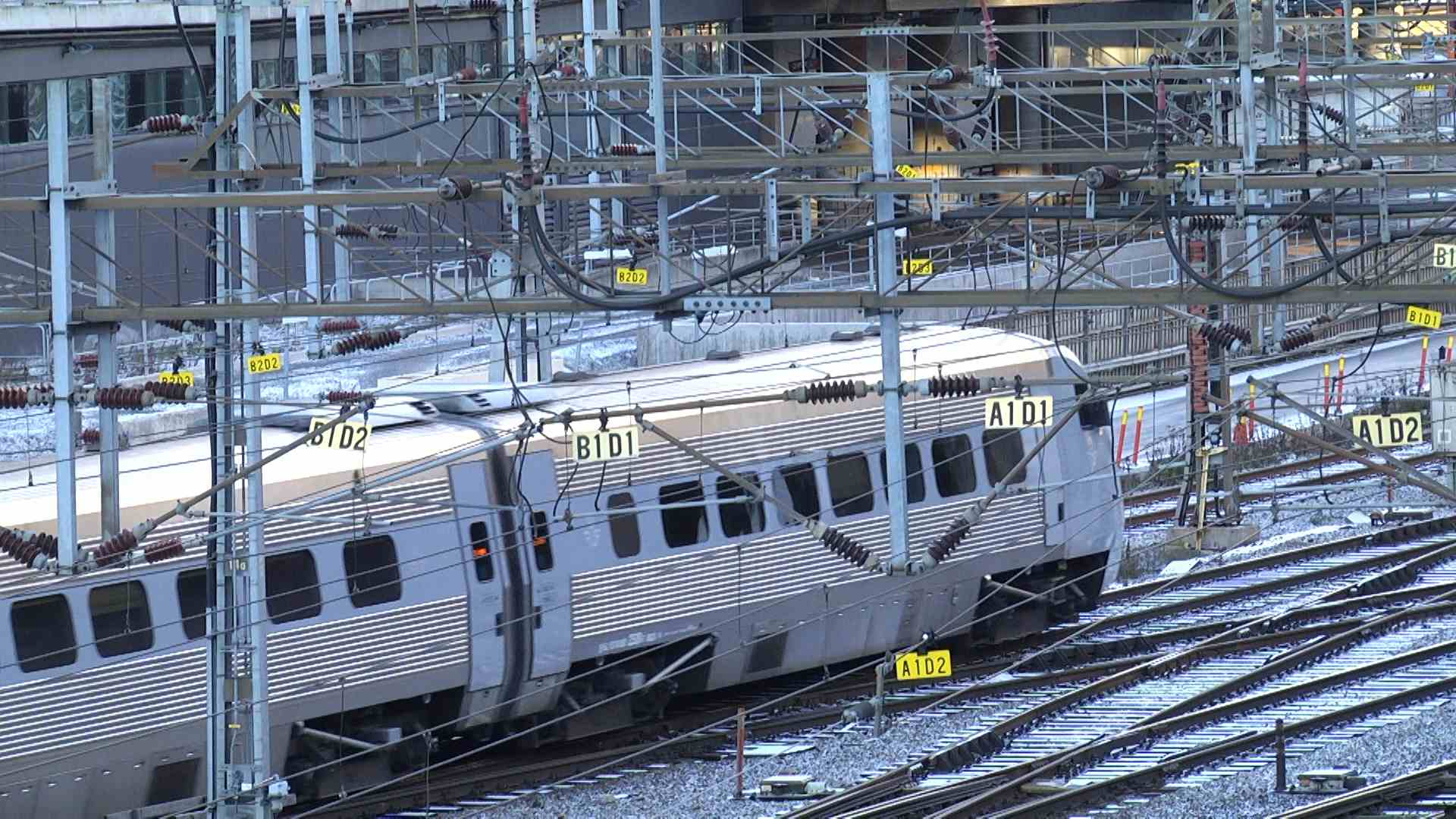 Another Biohax customer is Sweden's national railway, SJ, which allows passengers to show they have tickets via their chip implants. Railway spokesperson Stephen Ray said latest data shows 20 to 50 riders per day are using this technology, out of a total 130,000 average riders daily. Like TUI, the railway is analyzing new technologies. But Ray said it's not clear yet which ones the railroad company will use in the long term.
(Cover: Microchip the size of a rice grain may be the future for unlocking doors. /CGTN Photo)