Opinion: Decaying infrastructure: The source of US 'decline'
William Jones 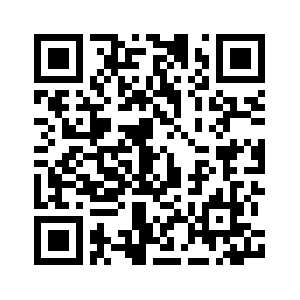 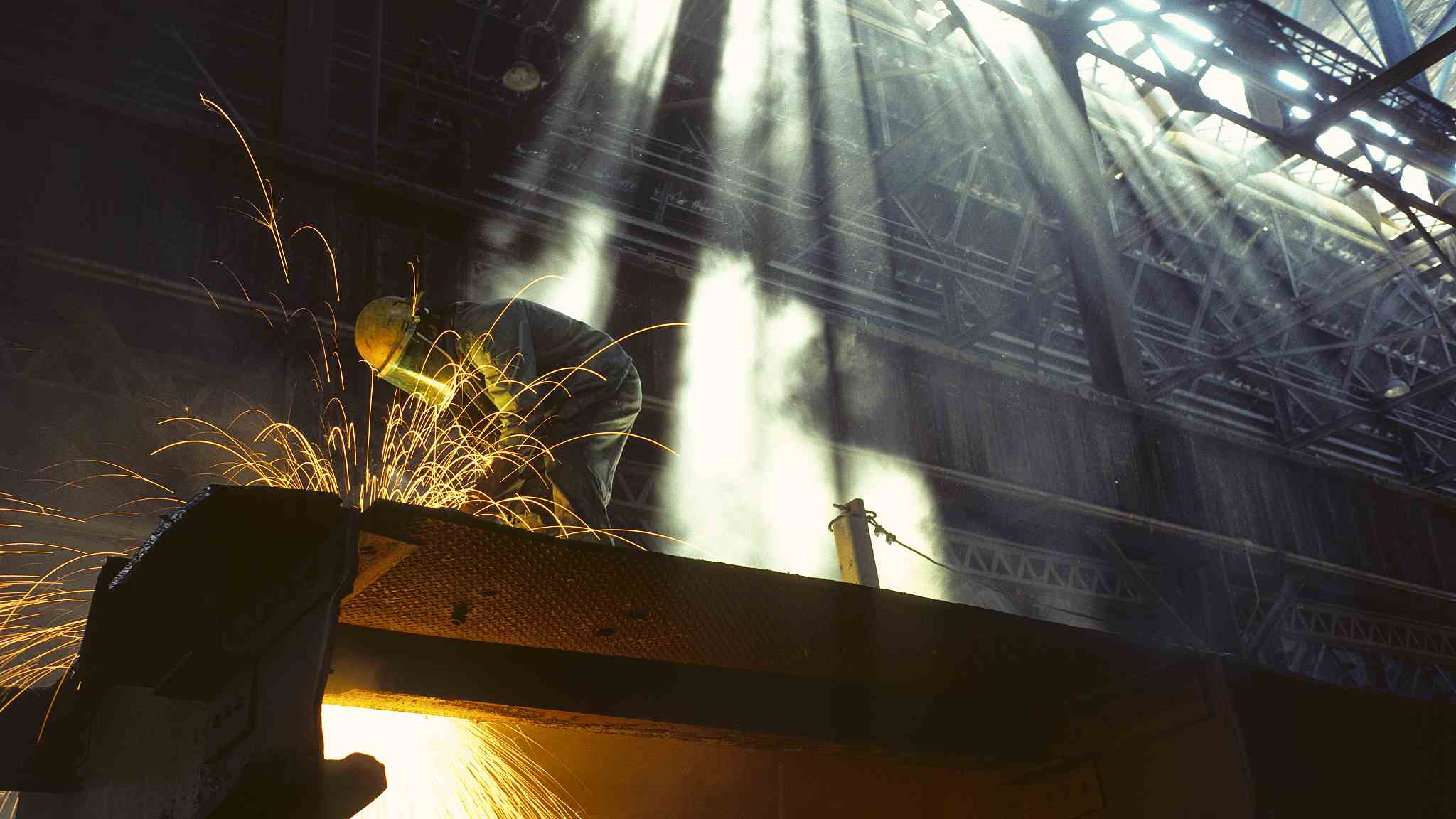 Editor's note: William Jones is the Washington bureau chief for the Executive Intelligence Review, and non-resident senior fellow of Chongyang Institute for Financial Studies under Renmin University of China. The article reflects the author's opinion, and not necessarily the views of CGTN.
The decline of the US infrastructure in real terms is obvious to anyone with eyes to see. Our roads are filled with potholes, our railroads are slow and uncomfortable, (often dangerous), and our bridges are collapsing. But the cause is not, as President Donald Trump has been persuaded to believe, some "trade deficit" with China.
Already in 1983, when trade with China was minuscule, two authors, Pat Choate and Susan Walter, wrote a dramatic expose of the decline of America entitled "America in Ruins: The Decaying Infrastructure". Already then they could document the ruinous conditions of our roads, our rail system, our ports and waterways, and our aging bridges. And conditions have only become worse since then.
The solution? Well, Mr. President, I would go back to what you talked about in your campaign concerning the need for rebuilding US infrastructure. Unfortunately, not much has been done since the beginning of this administration to make repairs. And attempting to rely on "private enterprises" to succeed will put any program on hold for a long time.
The fact of the matter is that the US infrastructure has only been promoted with the help of the US government ever since the creation of the "National Road" in 1811. 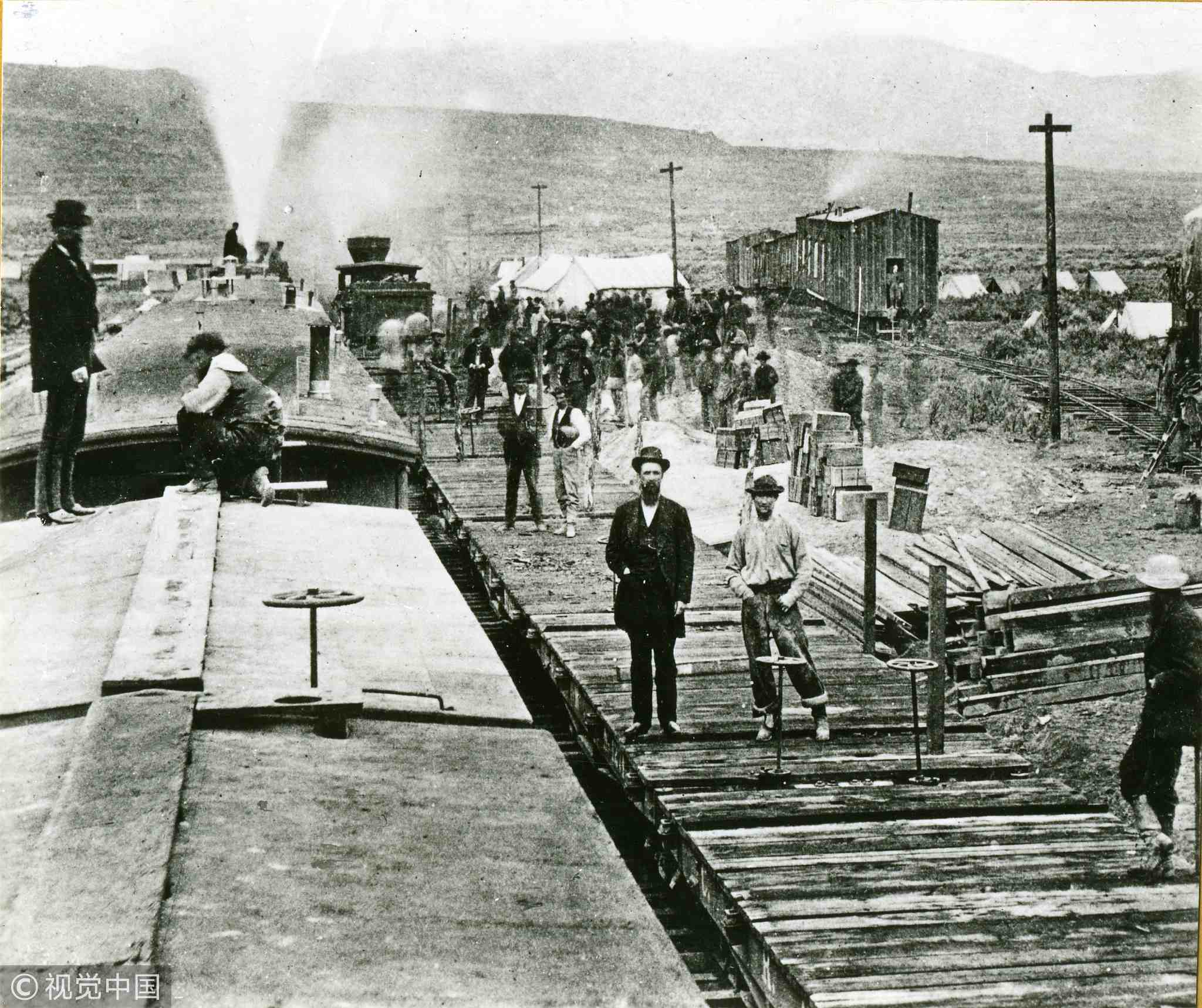 April 1869: The construction camp of the Central Pacific Railroad in Utah before linkup with the Union Pacific to create America's first transcontinental railroad, Utah. /VCG Photo

April 1869: The construction camp of the Central Pacific Railroad in Utah before linkup with the Union Pacific to create America's first transcontinental railroad, Utah. /VCG Photo

The decline of what was known as "public works" here in the United States has been replaced by a rush toward "de-regulation" and greater reliance on the "free market", for public goods, in the rather forlorn hope that cash-strapped entrepreneurs would withhold their desire for quick profits from their investment in order to engage in long-term, five, 10, or more years' investment before garnering any returns. And this they have not shown themselves willing to do.
China has progressed rapidly precisely because of its laser-like concentration on infrastructure, particularly transportation infrastructure. Many other countries, like China, during the 1970s and 80s also became cheap-labor producers for Western companies. But most of these have remained in poverty.
Why? Perhaps because there was no orientation toward the type of infrastructure development that China prioritized, which would allow them to "leap-frog" from their low-wage niche to a higher niche.
In many cases, the obstacle to such a program was those same Western countries that were profiting from the cheap wage labor available in those countries. They like it that way.
But now China has become a major economic power and the leading producer of infrastructure. Might this not be of benefit to the United States if Congress and a gaggle of "China-bashers" in the White House would cease making China a scapegoat, and instead view China as a friend – and collaborator?
Chinese firms could help build high-speed rail here in the US. Or, if it was felt that this would raise the "specter" of Chinese "control," they could simply invest in American companies to help do the job – and perhaps offer advice from the successful results of their own successful experience in the field. 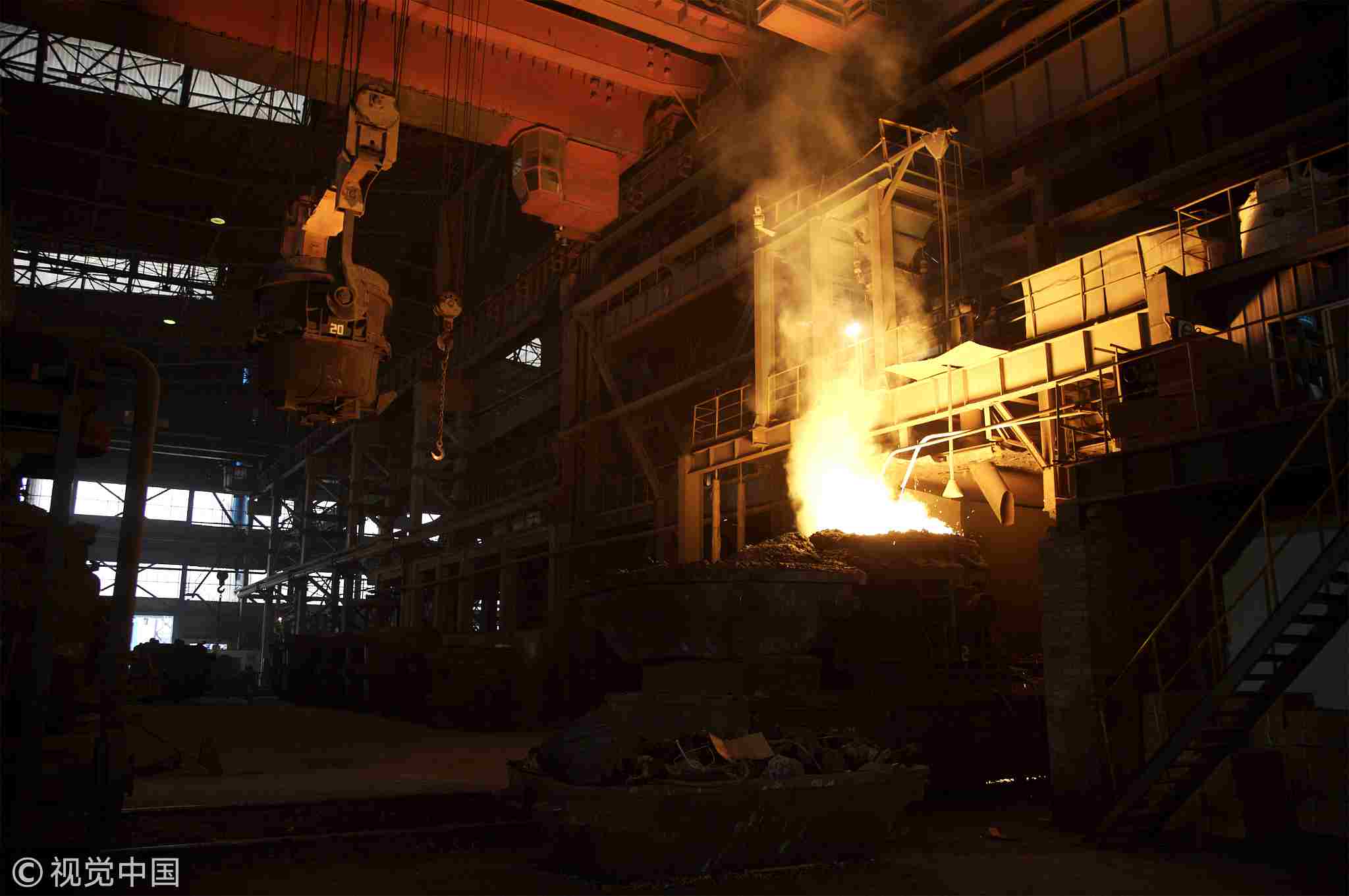 The needs here are great. The Northeast Rail Corridor (NEC), going from Washington to New York to Boston, is one of the most trafficked lines in the country, with 2,200 trains operating on some portions of it every day. And yet the average of major backlog projects are 111 years old, including 10 movable bridges, three sets of tunnels, and one viaduct.
There is presently no easy way to travel by rail either in the east-west or the north-south direction in the Midwestern heartland. While there used to be a rail link between Washington, DC to St. Louis, both of which are located roughly on the same latitude, and from there further west, one now has to take the detour to Chicago further northwest in order to move westward.
The US has 25,000 miles of inland waterway and 239 locks forming the nation's "water highway". It supports more than half a million jobs and delivers more than 600 million tonnes of cargo each year, about 14 percent of all domestic freight. And yet more locks and dams are well beyond their 50-year design life and thus nearly half of the vessels on the waterways experience delays. Here also there is a dearth of funding to bring this up to date. 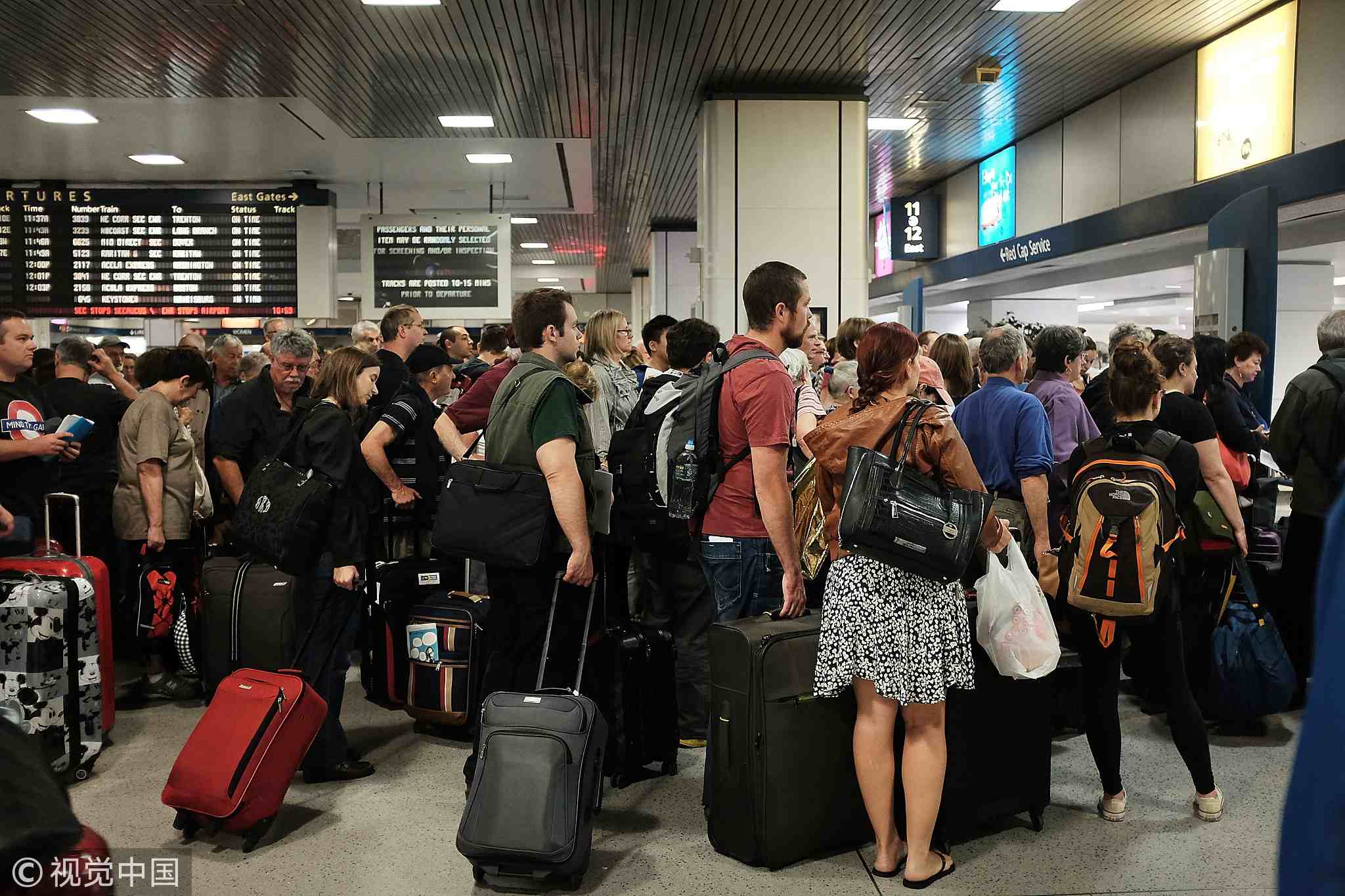 May 18, 2015: Passengers wait for an Amtrak train as normal service returned between New York City and Philadelphia in New York City. /VCG Photo

May 18, 2015: Passengers wait for an Amtrak train as normal service returned between New York City and Philadelphia in New York City. /VCG Photo

Perhaps China, with its experience of the Yangtze River Economic Belt could offer some tips in this respect, particularly with regard to our main waterway, the Mississippi River, which ends in the great port of New Orleans.
"Making America Great" will require a steady focus on these issues. And making "trade" the bogeyman for America's woes is not only criminal, but also a tremendous waste of time in dealing with those issues that will really revive the American economy. China could play a major role in "making America great" again.
While the paranoia that exists over China FDI makes direct investment still somewhat problematic, the Trump administration could do a "re-think" and establish an effective mechanism for infrastructure investment which would also be open to Chinese investment.
The creation of an infrastructure bank or fund under Federal purview could be an ideal instrument for Chinese investment. Much of what they now invest in Treasury bills might very well go instead to financing infrastructure – at a reasonable rate of return. But the solution ultimately lies with Washington rather than with Beijing.
President Trump has got to understand the folly of placing any credit in the foolish arguments of the "China-bashers" in his administration and face the reality that China, with its capabilities and experience in the field of infrastructure, can become an asset rather than a liability for US economic revival. But then President Trump has to extend the hand of friendship and not the "cold shoulder" of new tariffs when he meets the Chinese leader next month.
(If you want to contribute and have a specific expertise, please contact us at opinions@cgtn.com.)