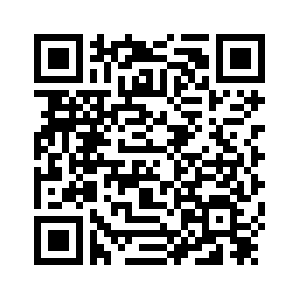 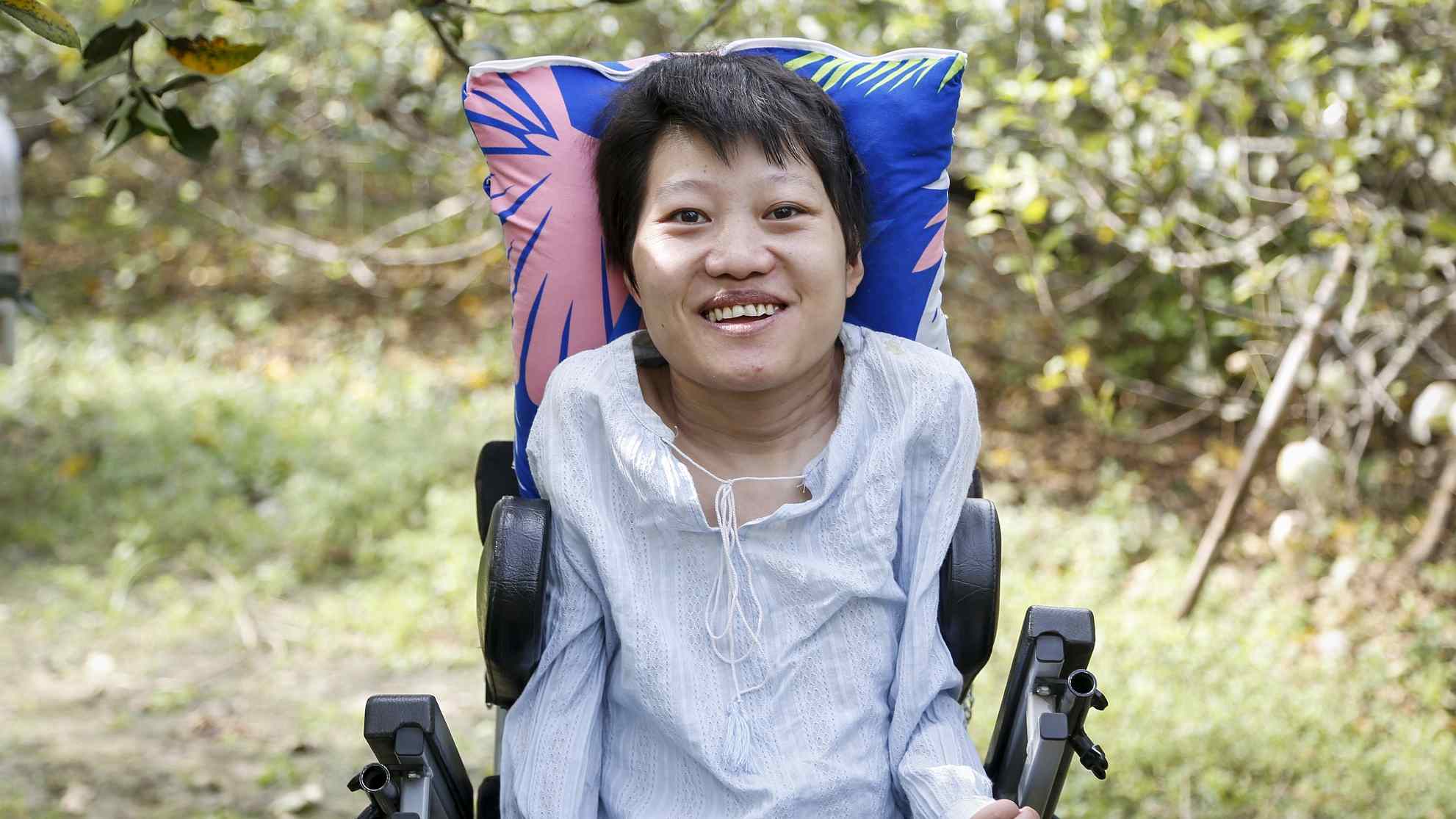 32 year-old Li Juan from east China's Anhui Province has been bedridden for nine years because of syringomyelia, a severe spine illness with slim chance of recovery.
With a cellphone, a holder and a hand-made stylus, the determined villager from Dangshan County has built a little E-commerce empire selling over 500 tons of local pears online every year. 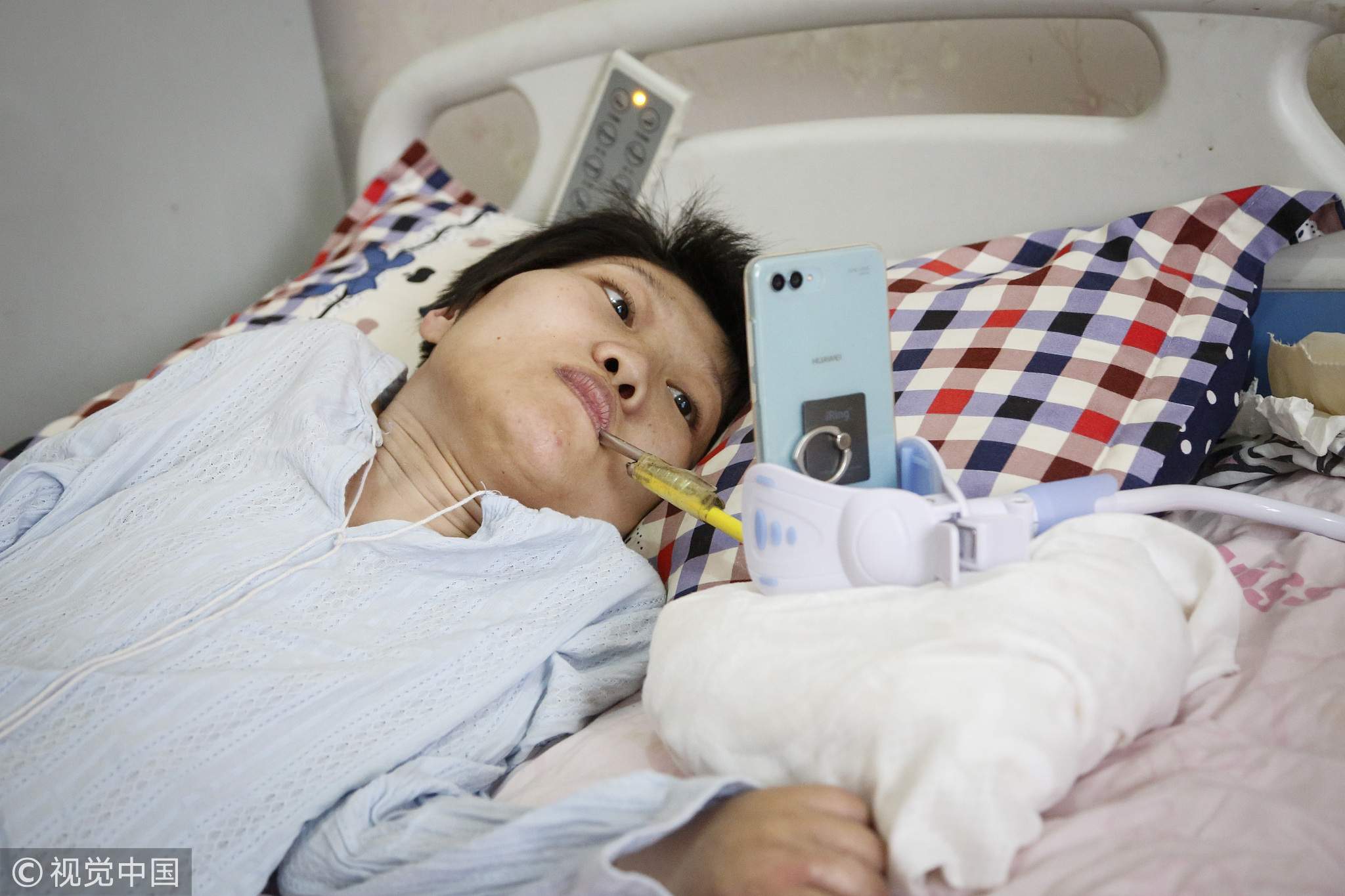 Li Juan holds a touch pen in mouth to type on her cellphone screen. /VCG Photo

Li Juan holds a touch pen in mouth to type on her cellphone screen. /VCG Photo

People would call Li a successful businesswoman now for her online shop's sales reaching 600,000 yuan (about 87,000 US dollars) annually, but back in 2008 Li was a desperate student, who nearly ended her life.
She started suffering muscle wastage in 2008 and was diagnosed with spinal stenosis in 2012. With seven spinal cords severely damaged and stomach narrowed to the size of a child's, Li's weight dropped to 25 kg.
At that period, Li was only able to eat fluid food. Not wanting to be a burden to her family, Li begged her mother to help end her life many times. "I live every day by seconds," Li told the reporter. 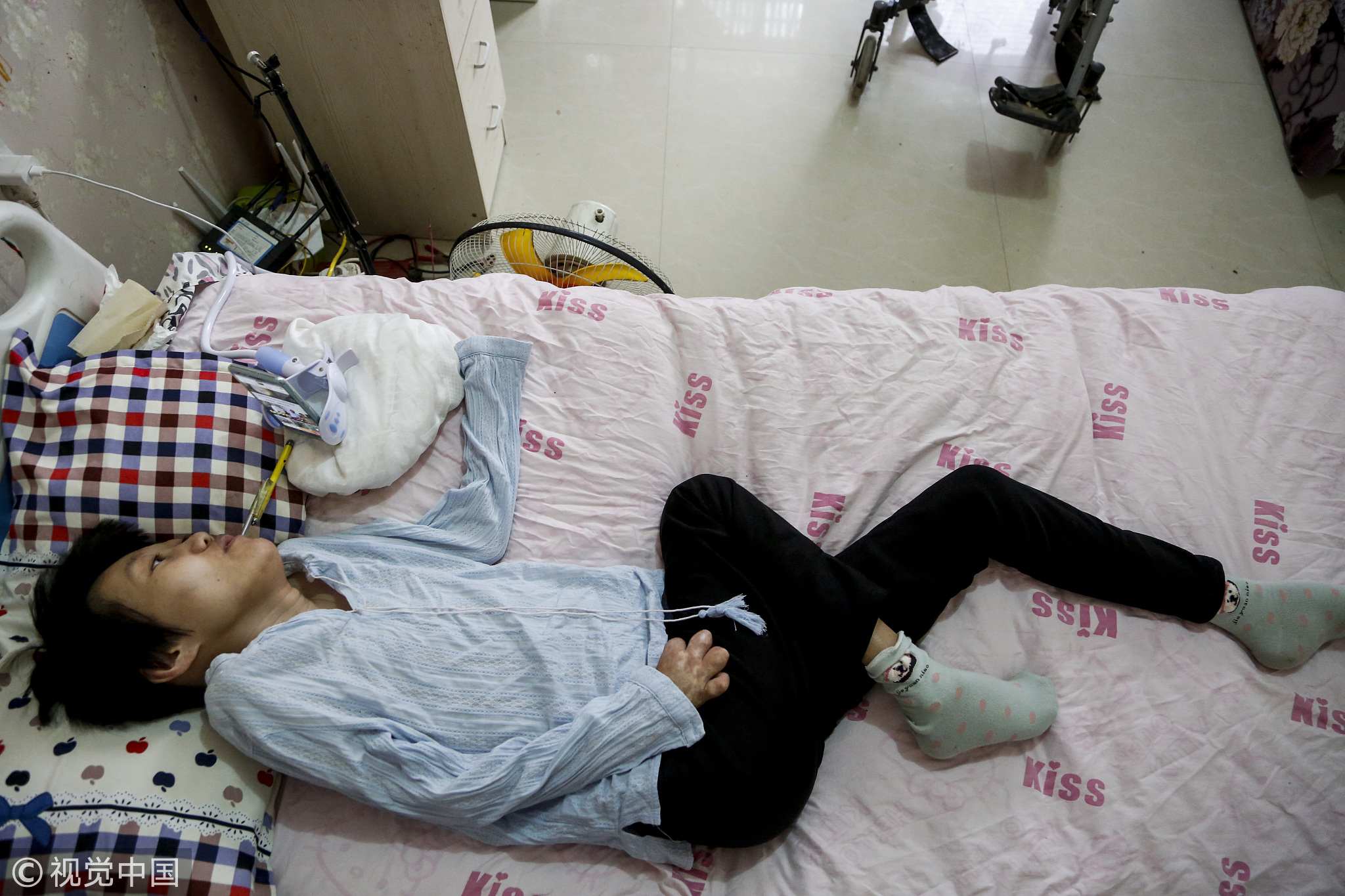 Once after waking up from an eight day coma, Li saw her family and friends waiting tirelessly by her bed, preparing to say farewell if she couldn't pull through. At that moment, she realized life was too short to be wasted and bravely decided to live.
Li asked her mother to make a touch pen for her, with teeth biting to operate the TV remote and phone. One year later, Li's family had internet access for her brother to prepare for college exams, which gave her an opportunity to learn about E-commerce. 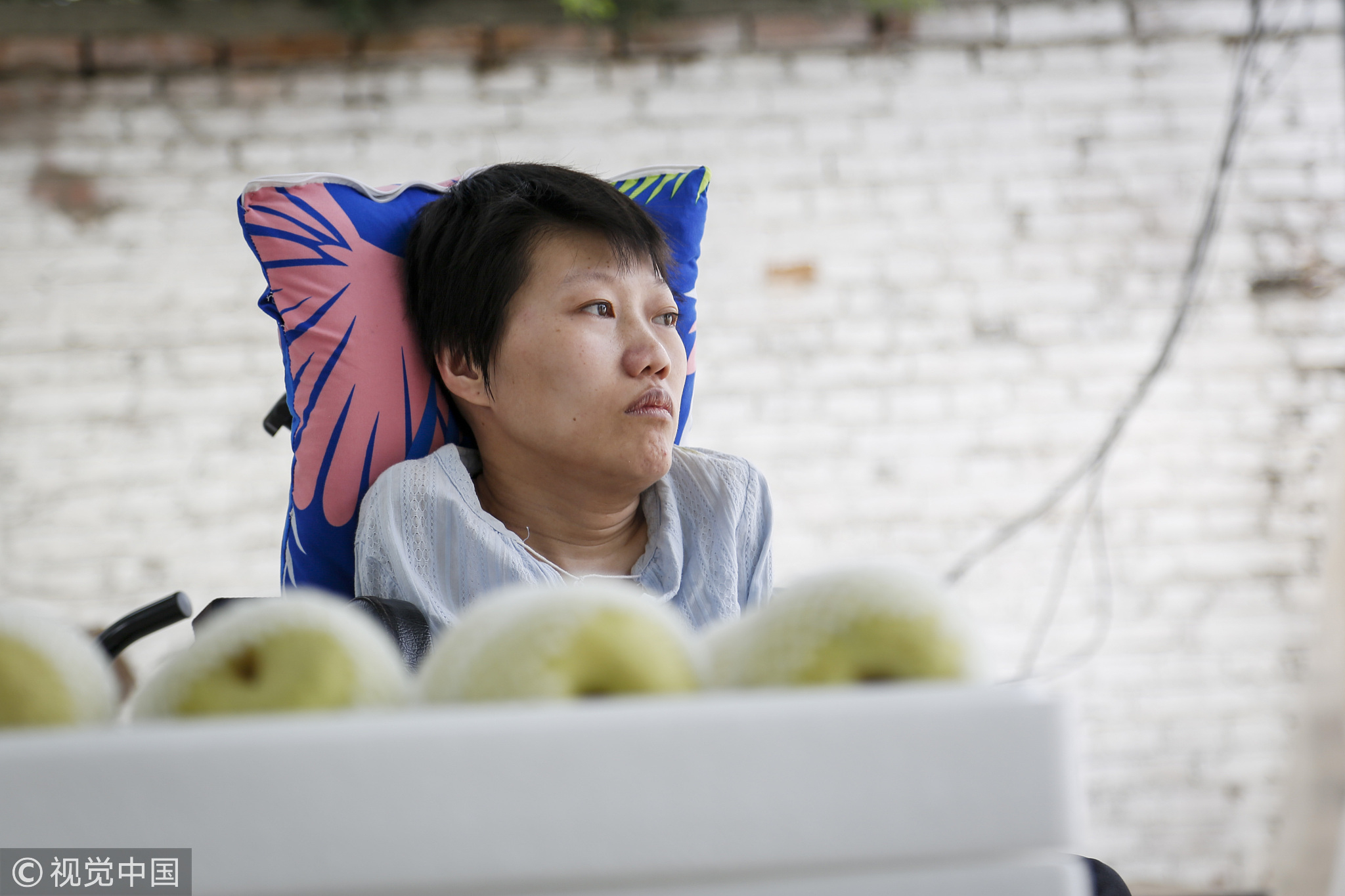 In the winter of 2015, Li found that the pears her parents planted were not selling well. Using a stylus pen held in mouth, she posted some photos of the fruits and typed a 100-word-introduction to ask if any of her online friends would like to buy them.
Unexpectedly, Li got her first order and 20 orders followed. From that day on, Li knew there was a business opportunity. 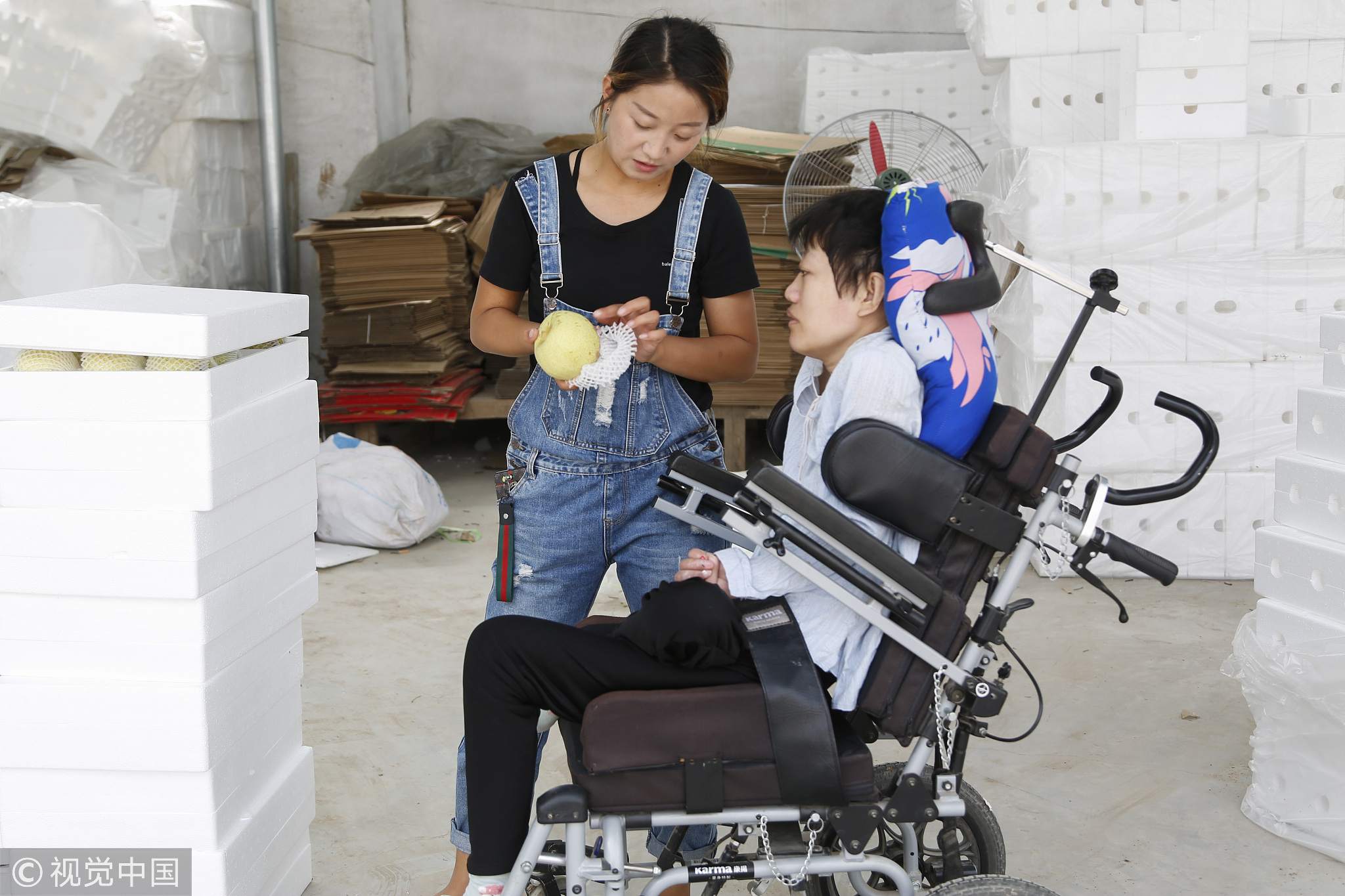 Li Juan's sister shows a pear to her at home. /VCG Photo

Li Juan's sister shows a pear to her at home. /VCG Photo

Li is busy running her small business every day. Under her judicious management, her brother and sister also joined the lucrative online shop.
The local government helped Li register her own company. It's not only pears she now sells, but also other fruits grown from her region, aiding other local fruit farmers sell their own stock. 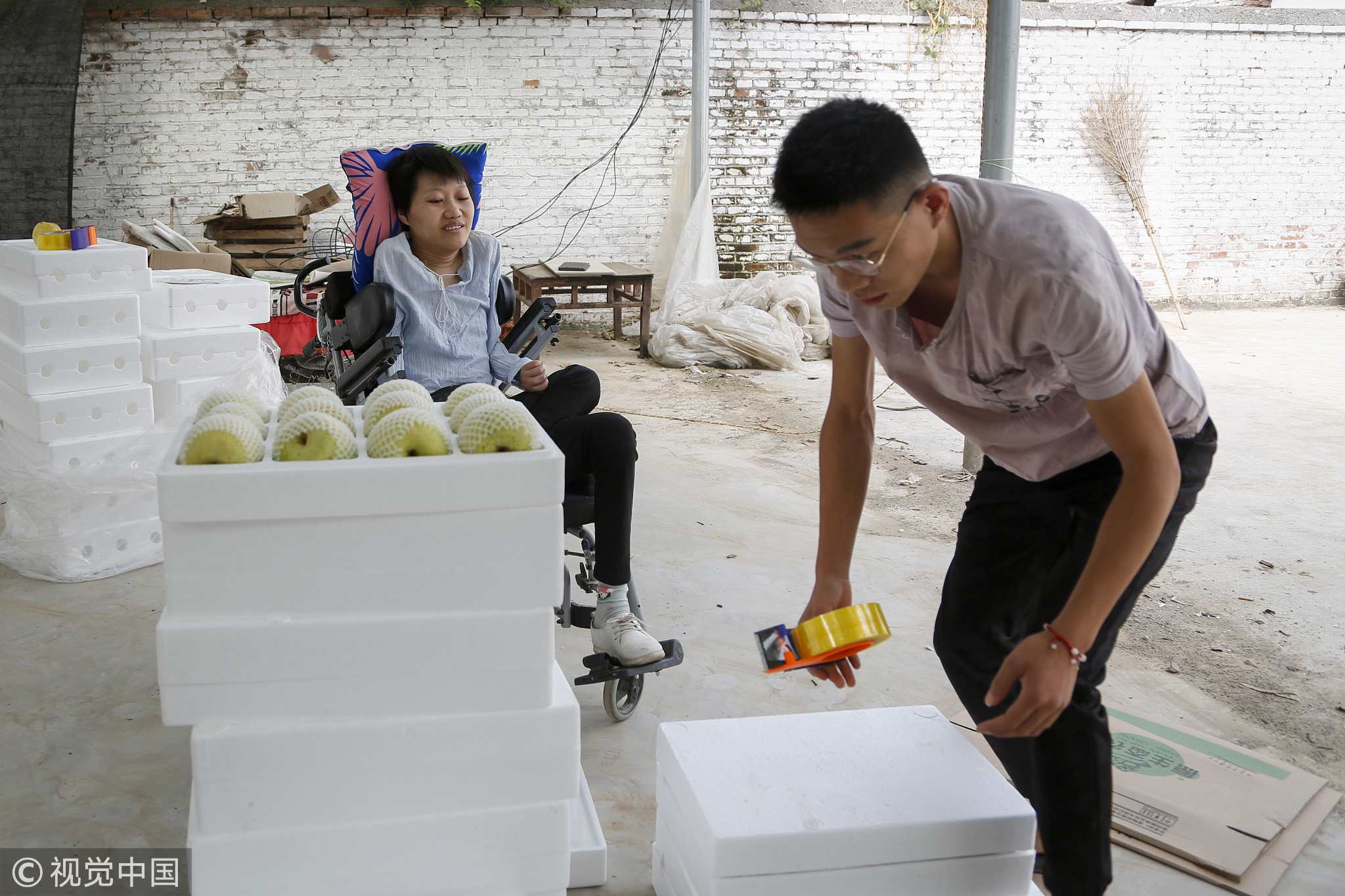 "E-commerce has changed my life and I don't just do it to earn respect," Li said, "I want my life to be fuller and more valuable".
The indomitable girl plans to help more disabled and underprivileged people to start their own businesses.
Li has always been grateful to her family for their meticulous care and continued support. She considers her family the biggest motivation for her achievements and survival.
Feeding her girl with a spoon for nearly ten years, Li's mother is so proud of her daughter. "Nothing makes me happier than seeing her smile," the mother said.