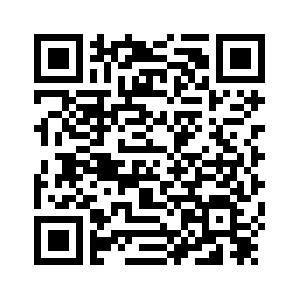 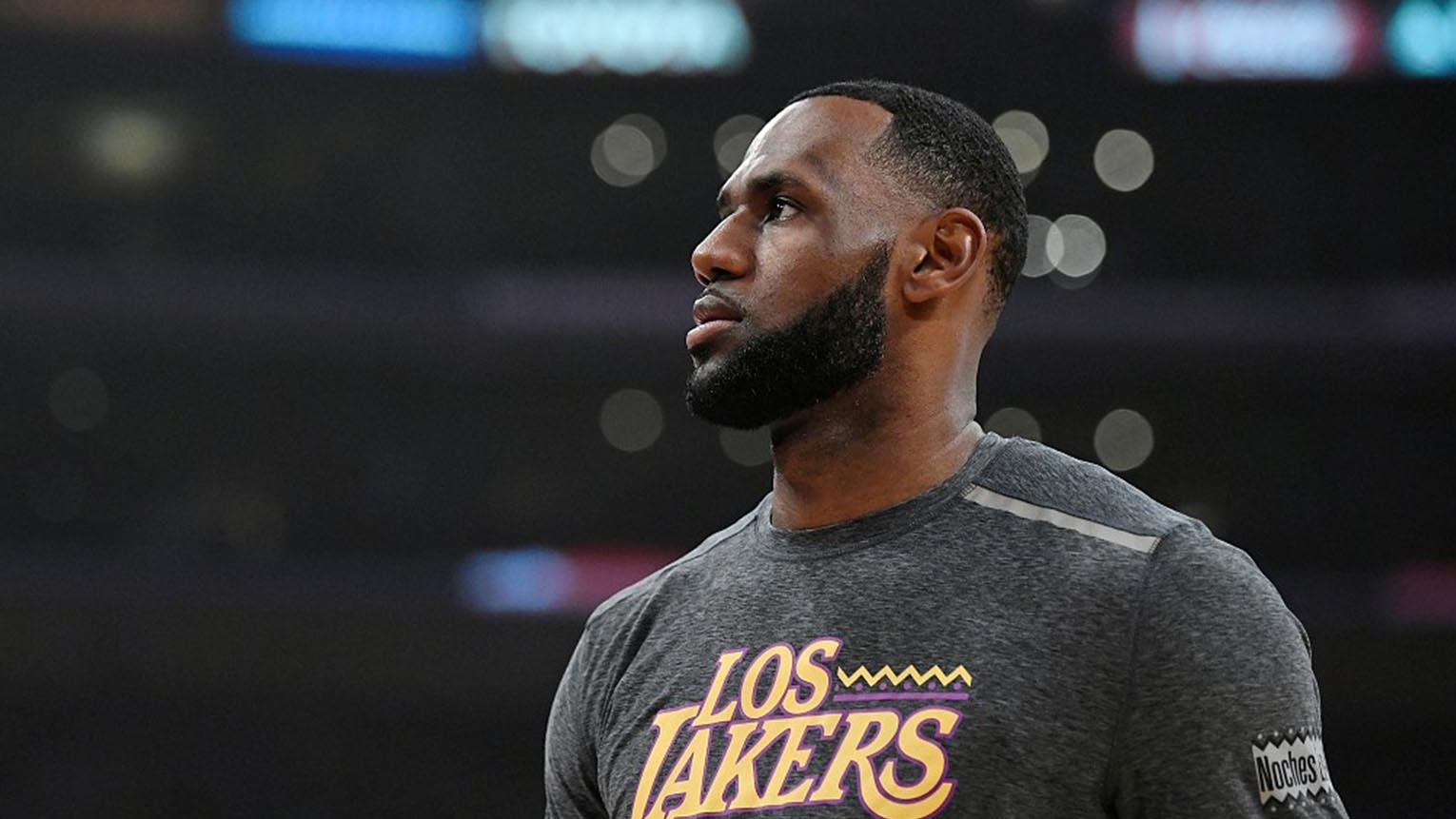 The Los Angeles Lakers lost again as the visiting Denver Nuggets left the Staples Center with a 115-99 victory. Although LeBron James scored the court high of 31 points and surpassed Michael Jordan to rank No.4 on the list of NBA career scoring leaders, it does not change the fact that his first season with the purple and gold turned out to be a failure.

Lakers had their chance to win 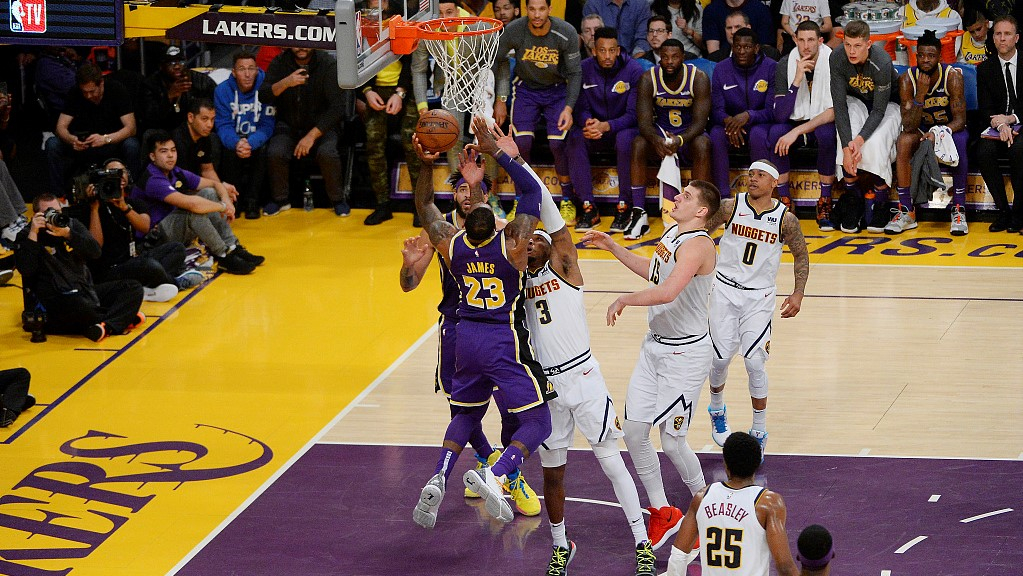 LeBron James #23 of the Los Angeles Lakers shoots in the game they lose against the Denver Nuggets 115-99, March 6. /VCG Photo

LeBron James #23 of the Los Angeles Lakers shoots in the game they lose against the Denver Nuggets 115-99, March 6. /VCG Photo

It's hard to tell how determined Denver were to win this game. They played a crazy quarter in Q1 by burying three-pointers one by one to get 43 points. However, in the following two and a half quarters, the Nuggets scored in total 44 points while the Lakers had 60, thanks to efforts by Alex Caruso, Moritz Wagner and Johnathan Williams, players who usually did not get to play.
However, Denver were the better team and they managed to get their offense back together and put down 28 points. By contrast, the Lakers had to watch the score differential grow larger and larger because they simply couldn't make those key shots. In the end, the purple and gold could only accept their fourth straight loss. 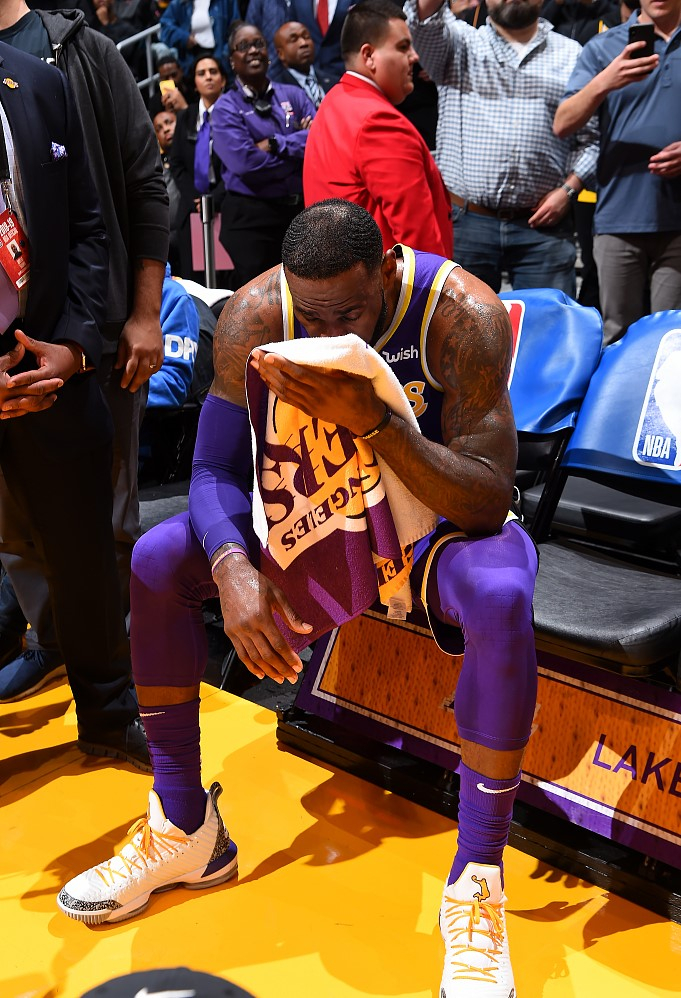 James of the Lakers  wipes tears off his face after he surpasses Michael Jordan to rank No.4 on the list of NBA career scoring leaders in the game against the Nuggets, March 6. /VCG Photo

James of the Lakers  wipes tears off his face after he surpasses Michael Jordan to rank No.4 on the list of NBA career scoring leaders in the game against the Nuggets, March 6. /VCG Photo

It was almost for sure that James, after eight consecutive trips to the NBA Finals, would miss the playoffs for the first time in 14 years. Someone had to be held responsible, and that could be Lakers president Magic Johnson, general manager Rob Pelinka, head coach Luke Walton but definitely James himself.
The Lakers actually had a very good start this season and they were once ranked No.4 in the Western Conference by winning 21 of their first 35 games and crashed the Golden State Warriors in Christmas, during the game when LeBron left the court in the third quarter. At that time, the youngsters in the purple and gold provided the league's top defense and seemed capable of defeating any opponent.

James fails to do his job 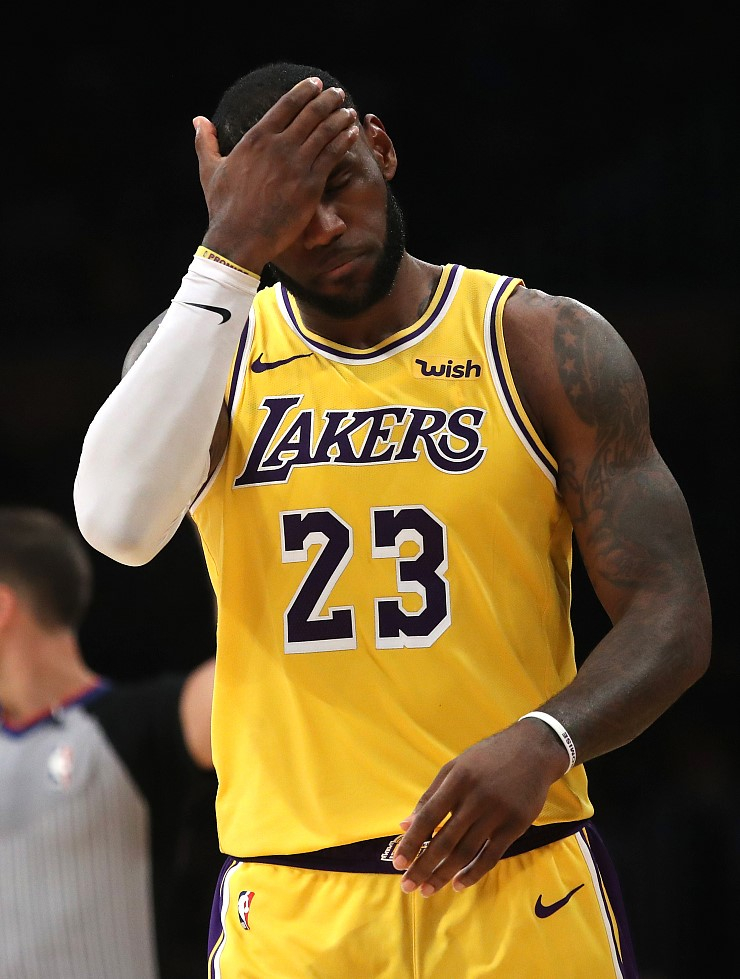 The first season of James with the Lakers is a failure. /VCG Photo

The first season of James with the Lakers is a failure. /VCG Photo

Injuries have changed things since then. James' absence hurt the Lakers' offense and Lonzo Ball's injury took a painful bite on the team's defense and orchestration. However, even after they confronted such obstacles, the playoffs seemed a big problem for the Lakers and the trade rumors about Anthony Davis put the young players in jitters, making them less invested than they were before in the game.
It's unclear what role James had played in this except for the fact that him and Davis shared the same agent in Rich Paul, but the real disappointment happened when "the King" came back. 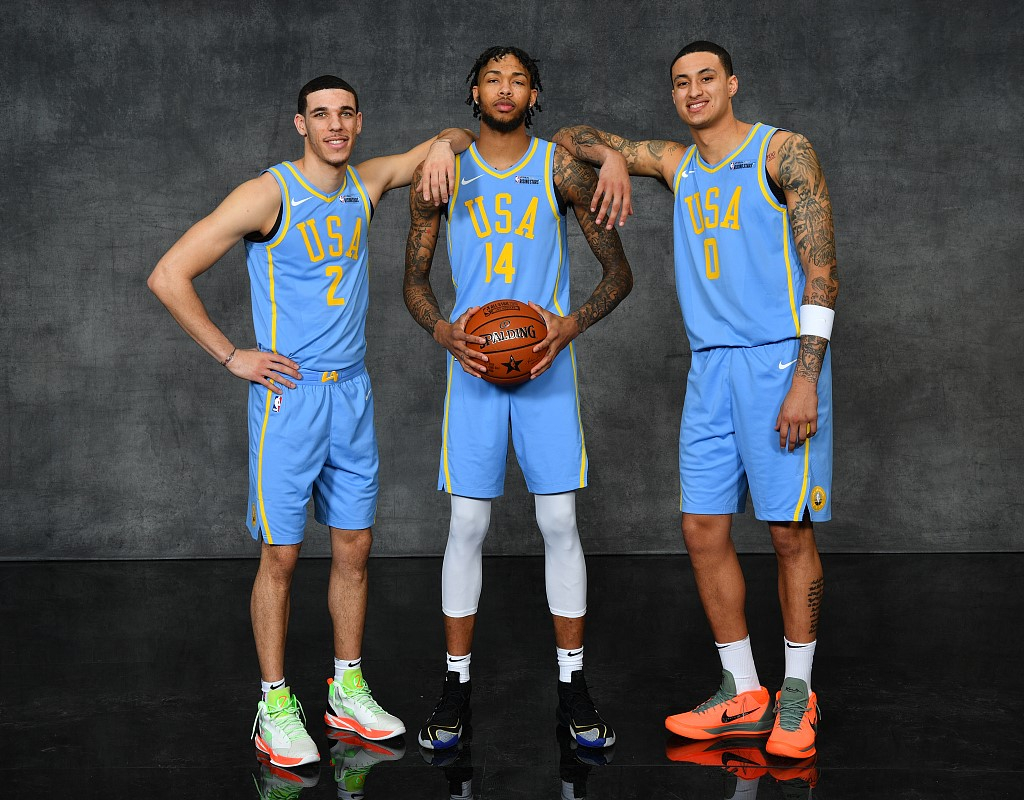 Since James gained some weight during his recovery, and the fact he's already 34 years old, it's understandable for him to save some energy in defense. Nonetheless, saving energy does not equal doing nothing, and definitely could not justify pointing fingers at his teammates for not doing good enough. As the team's leading superstar, James' job should be setting an example for young men, or at least helping the team stick together, not accusing others of failing to do their job when James himself could not do it either.
Some of James' supporters argued that he did his best but his teammates weren't helping. However, the truth hurt because last season after the Lakers finished their 63 games, they won 31 of them, one more than this season - and the team did it without James. Kobe Bryant #24 of the Lakers shoots a free throw with a torn Achilles tendon in the game they win agaisnt the Golden State Warriors 118-116, April 12, 2013. /VCG Photo

Kobe Bryant #24 of the Lakers shoots a free throw with a torn Achilles tendon in the game they win agaisnt the Golden State Warriors 118-116, April 12, 2013. /VCG Photo

What's also not in James' favor was that the Lakers had a similar scenario six years ago, but had a different ending. In the 2012-13 season, the purple and gold only won 29 of their first 59 games. Steve Nash did not play much, Dwight Howard was affected by back injury and did not like to play pick-and-roll while Paul Gasol was lost about his role in the team. Besides, the Lakers at that time were old, slow, lacked shooting range and athleticism, no better than today's franchise, if not actually worse.
Kobe Bryant, who was also 34 years old then, stood out to carry the Lakers into the playoffs by himself with 16 wins in the following 23 games, at the cost of a torn Achilles tendon. No one asked James to do the same but he did not even seem to try to work harder. No wonder the Lakers fans began to chant "we want Kobe" in the game they lost to the Los Angeles Clippers on Monday. 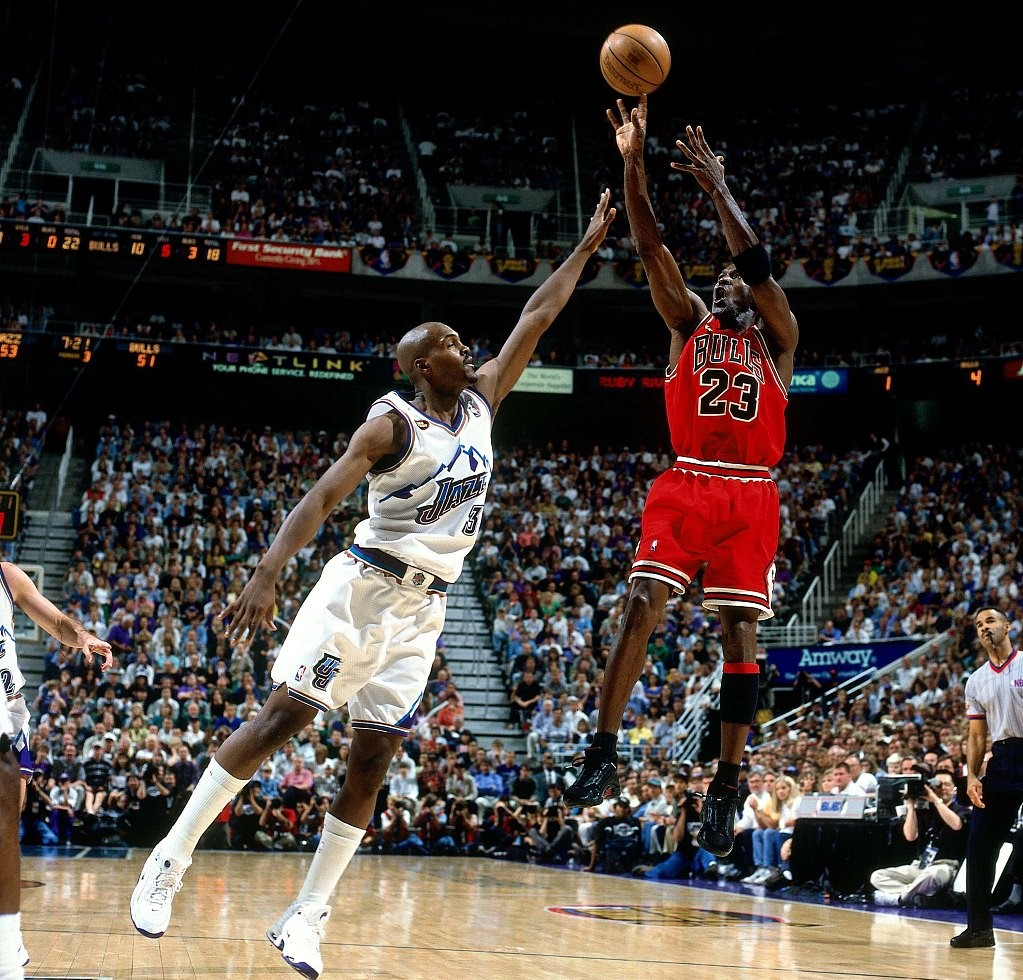 The future will also be a challenge for James. He turns 35 years old next season, losing even more vitality and athleticism. Jordan, at that age (in 1998), won the following honors: the NBA Championship, MVP, Finals MVP, scoring leader, All-NBA First Team and NBA All-Defensive First Team. Since James was not selected Player of the Month even once so far this season, it's hard to imagine that he could win any of the above honors next season.
James had his best years in the Eastern Conference and his first season in the West already cast doubts on his career. Before he can prove himself again by, for example, leading the Lakers to at least the playoff finals in the West, he has definitely shown himself to not be the best basketball player in the world.
Other games on Wednesday included: (away teams come first)
Miami Heat 91-84 Charlotte Hornets
Minnesota Timberwolves 114-131 Detroit Pistons
Dallas Mavericks 123-132 Washington Wizards
San Antonio Spurs 111-104 Atlanta Hawks
Cleveland Cavaliers 107-113 Brooklyn Nets
Philadelphia 76ers 107-108 Chicago Bulls
Utah Jazz 114-104 New Orleans Pelicans
New York Knicks 96-107 Phoenix Suns
Boston Celtics 111-109 Sacramento Kings