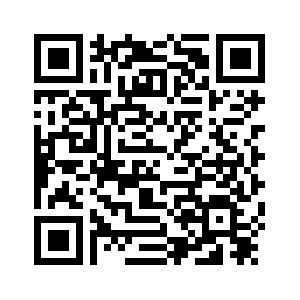 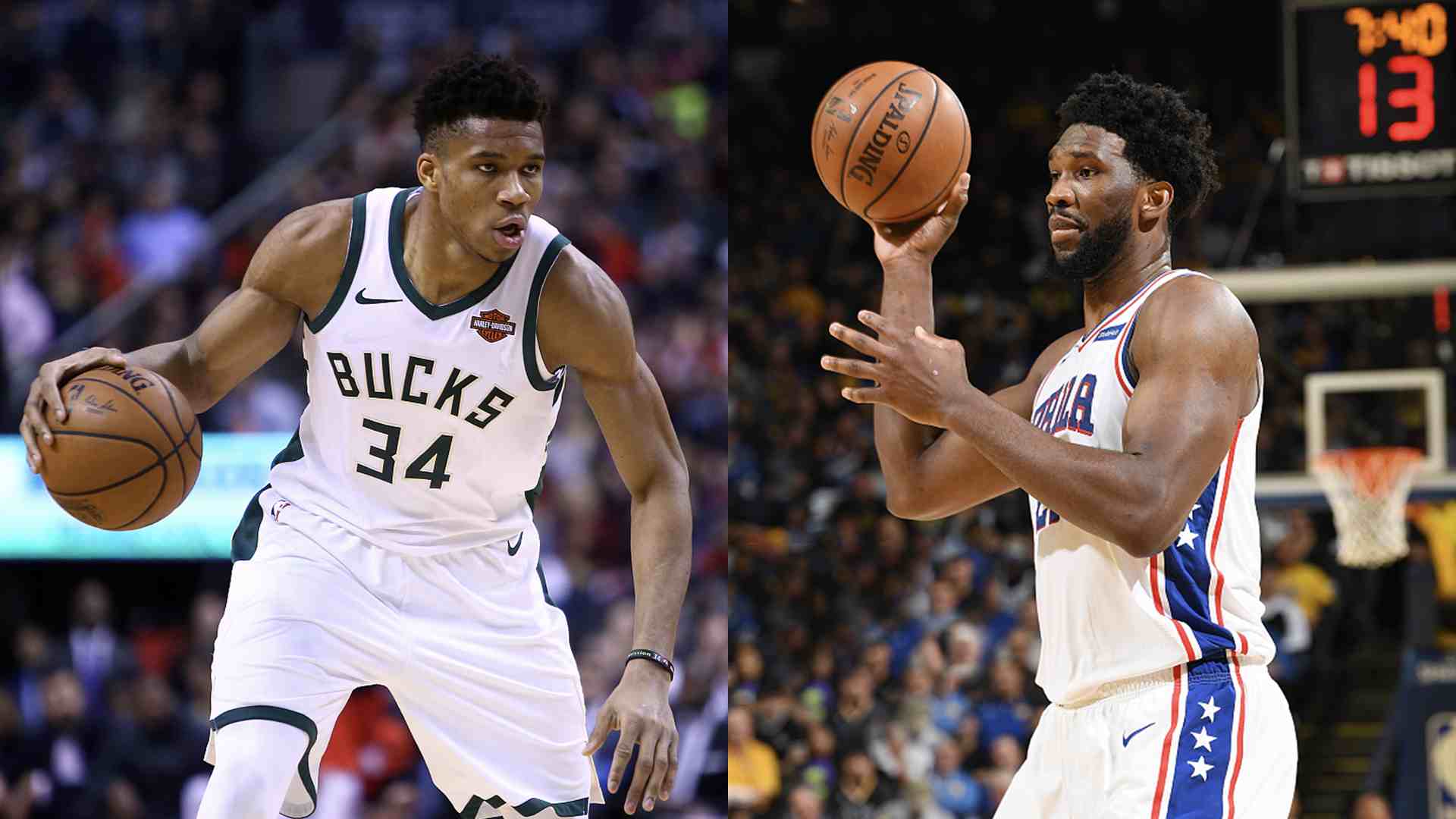 In the two key games of the 2018-19 NBA regular season on Thursday, the Milwaukee Bucks beat the Toronto Raptors 105-92, further consolidating their position as No.1 in the Eastern Conference; the Philadelphia 76ers defeated the Golden State Warriors 113-104, ending GSW's 11-straight winning trend. 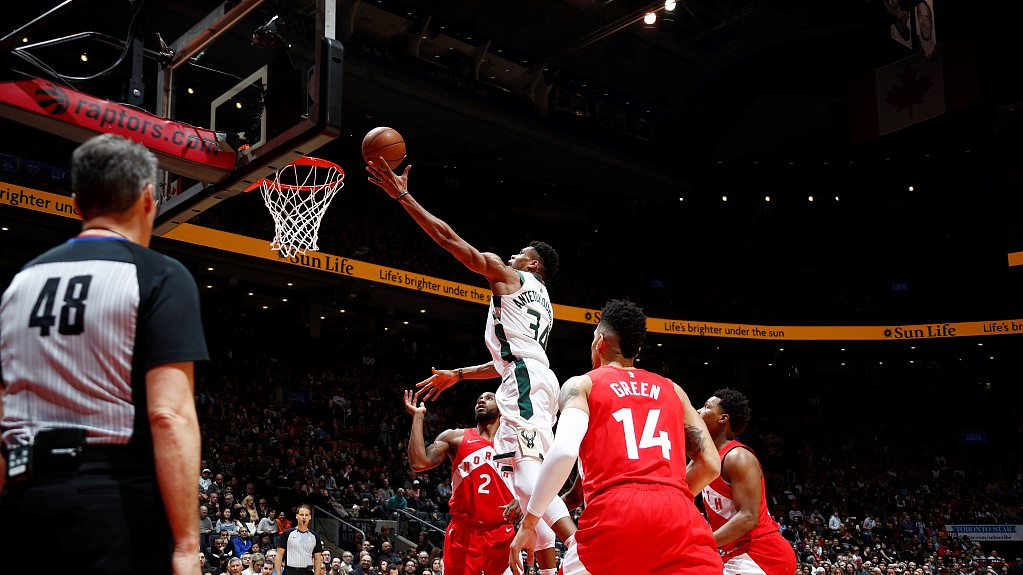 Giannis Antetokounmpo #34 of the Milwaukee Bucks does a layup against the Toronto Raptors 105-92 on January 31. /VCG Photo

Giannis Antetokounmpo #34 of the Milwaukee Bucks does a layup against the Toronto Raptors 105-92 on January 31. /VCG Photo 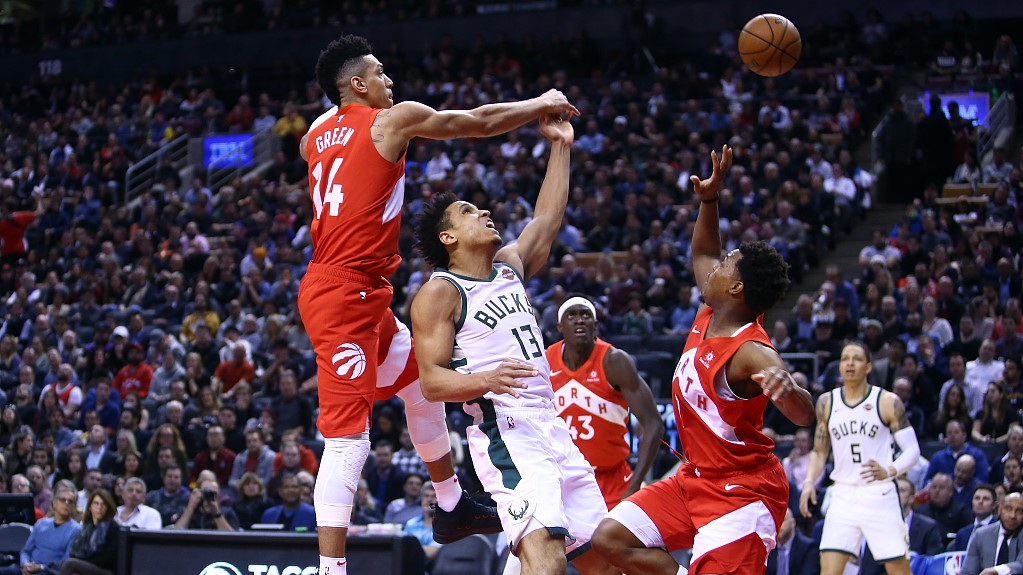 Players of the Bucks (white) and the Toronto Raptors (red) compete for the ball on January 31. /VCG Photo

Players of the Bucks (white) and the Toronto Raptors (red) compete for the ball on January 31. /VCG Photo

The two teams presented a real playoff-level game at the Scotiabank Arena. Thanks to the breathless defense of the two teams, scoring became a luxury in the first quarter. The Bucks had no one scoring double digits -- the five points by Middleton, Bledsoe and Hill were the highest. As for the Raptors, though Ibaka dropped 10 points, their No.1 player Leonard had only two points after missing four of his five shots.
Things began to change in the second quarter for Milwaukee as the team sank seven of their 11 shots from the 3-pt line, one of which even came from Antetokounmpo, who made all shots this quarter to get nine points. By contrast, though Leonard grew warm with his hands with a 60-percent rate for field goals (3/5), Toronto continued to miss three-pointers by making only one of the nine attempts. Milwaukee seized the opportunity to establish a nine-point lead (56-47) after the second half. 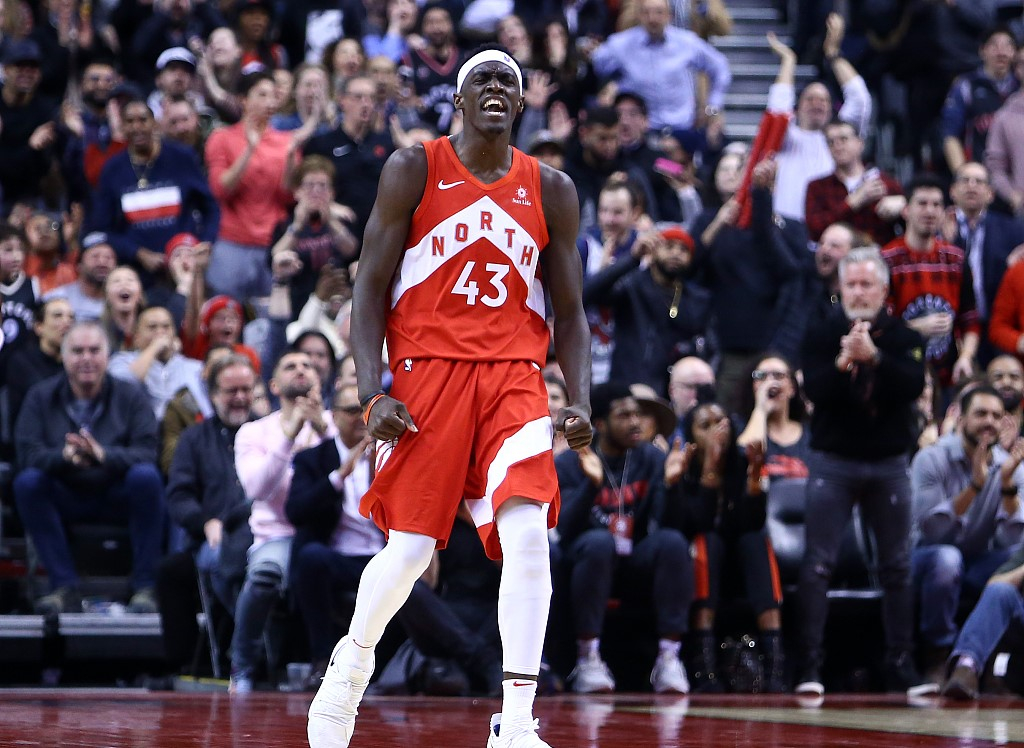 Pascal Siakam of the Raptors celebrates in the game against the Bucks on January 31. /VCG Photo

Pascal Siakam of the Raptors celebrates in the game against the Bucks on January 31. /VCG Photo

The Bucks remained boiled with shooting in the third quarter and once expanded their lead to 24 points (78-54). Then Siakam stood out for Toronto to lead his teammates to launch a 27-9 run into the fourth quarter, keeping the game from becoming a foregone conclusion. Siakam contributed 15 points.
Milwaukee then managed to slow down the pace and again turned the game into a seesaw struggle in which they had an advantage: 2.13-meter-tall Lopez remained in the paint to protect the rim while the team's back-court players raise their long arms to stop the Raptors from shooting around the 3-pt line. Thanks to such a defense style, Toronto made only seven three-pointers with a 3-pt rate of only 25.93 percent and trailed in rebounding 39-50.
In the end, the Bucks claimed the third victory in their four games against the Raptors this season, acquiring the upper hand in possible contact in the playoffs. 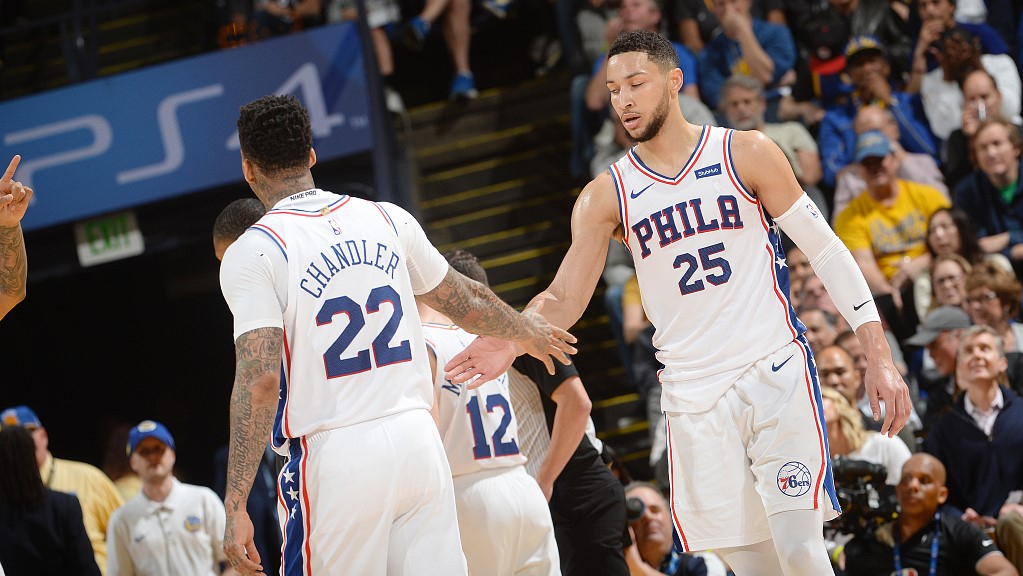 Players of the Philadelphia 76ers in the game they won against the Golden State Warriors 113-104 on January 31. /VCG Photo

Players of the Philadelphia 76ers in the game they won against the Golden State Warriors 113-104 on January 31. /VCG Photo

Klay Thompson did not play because of illness. Stephen Curry dropped the court's highest 41 points and again sank 10 three-pointers for Golden State. Kevin Durant scored 25 points but made only one shot after eight attempts from the 3-pt line. DeMarcus Cousins struggled with shooting and took only seven points.
Philadelphia's Ben Simmons put down 26 points with an outstanding FG rate of 76.92 percent (10/13). Joel Embiid also scored 26 points and grabbed 20 rebounds, though his eight turnovers were a little unpleasant to look at. Jimmy Butler felt cold with his hands to get only seven points with an FG rate of 25 percent (3/12). 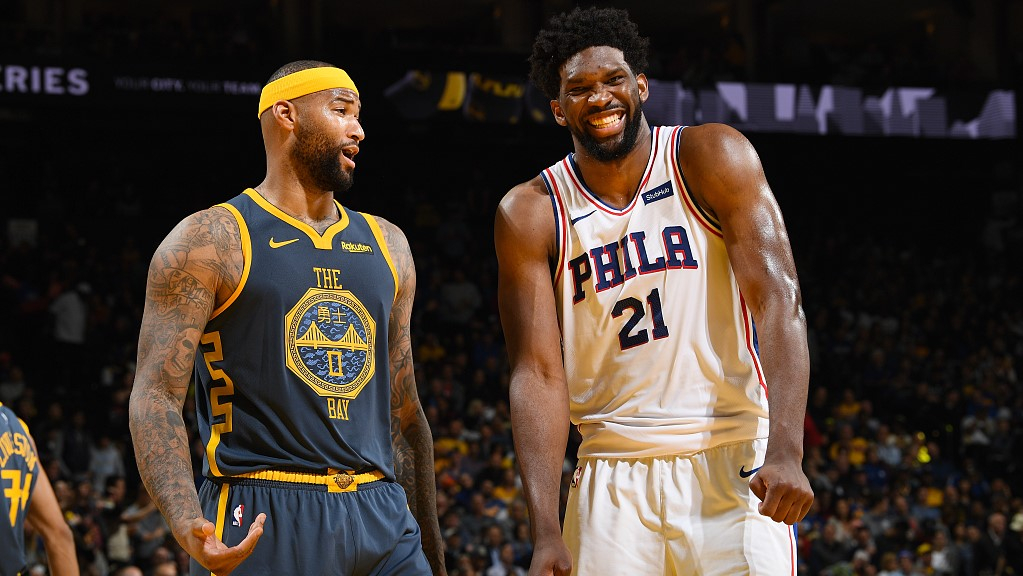 DeMarcus Cousins (L) of the Warriors and Joel Embiid (R) of the 76ers talk to each other in the game on January 31. /VCG Photo

DeMarcus Cousins (L) of the Warriors and Joel Embiid (R) of the 76ers talk to each other in the game on January 31. /VCG Photo

Unexpected by many, the competition between the two new-era centers, Cousins and Embiid did not happen. Cousins invested more efforts in supporting his teammates and he delivered five assists in the first quarter alone. Embiid obviously wanted to help the 76ers but his impatience cost him seven turnovers in the first half.
Curry played a very smooth first half by dropping 23 points and making six of eight three-pointers. The Warriors moved the ball quickly and crisply to deliver 19 assists during the same period to establish a seven-point lead (60-53). However, there were two risks left in the defending champion's game: First, only Curry made three-pointers; second the team were not focused enough in defense. 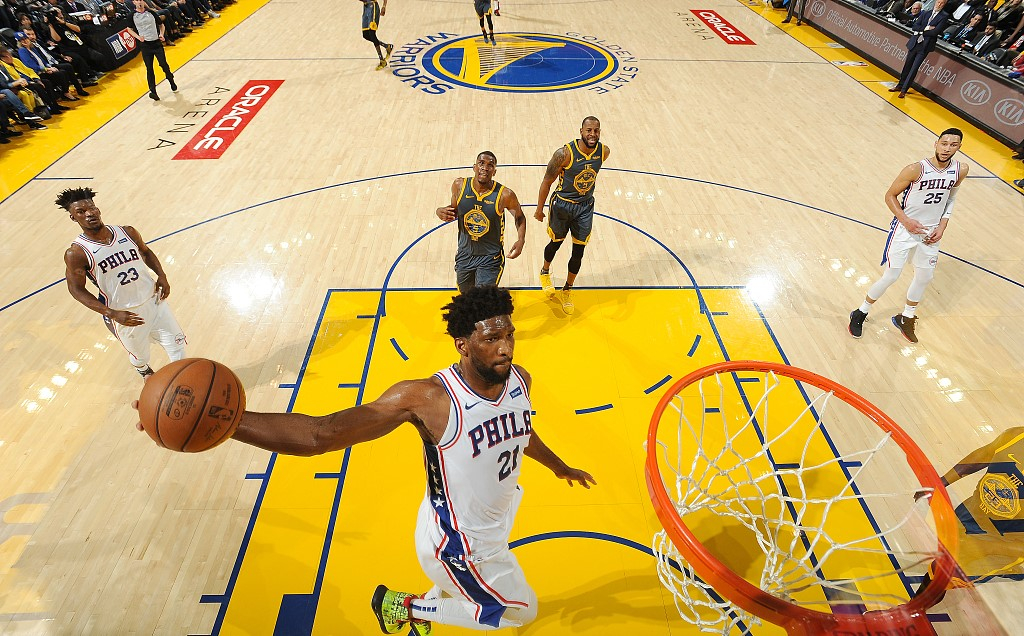 Joel Embiid #21 of the 76ers dunks in the game against the Warriors on January 31. /VCG Photo

Joel Embiid #21 of the 76ers dunks in the game against the Warriors on January 31. /VCG Photo

The two risks became real threats in the third quarter as Philadelphia began to divide their forces into two in defense: One to hunt for Curry outside the 3-pt line and the other to remain in the restricted area. Moreover, the team's head coach Brett Brown began to give more time to Embiid when Cousins was not on the court so he could make the best of his 2.16-meter-tall, 113-kilogram player.
Such tactics soon worked. GSW could not keep scoring and had to watch Embiid dominate offense rebounds. With a 42-26 run in the third quarter, the 76ers came back with a steady lead. Though the Warriors tried to catch up, they had only Curry's 3-pt to rely on and that's far from enough. As Embiid earned two fouls on Cousins and Durant and made all four free throws in the end, Philadelphia claimed their first win against the Warriors in five years.
Other games on Thursday included: (away teams come first)
Dallas Mavericks 89-93 Detroit Pistons
Indiana Pacers 100-107 Orlando Magic
Brooklyn Nets 114-117 San Antonio Spurs
Los Angeles Lakers 123-120 Los Angeles Clippers