Indian rupee in free fall: Why it's worrying
Khushboo Razdan 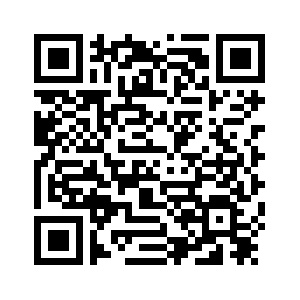 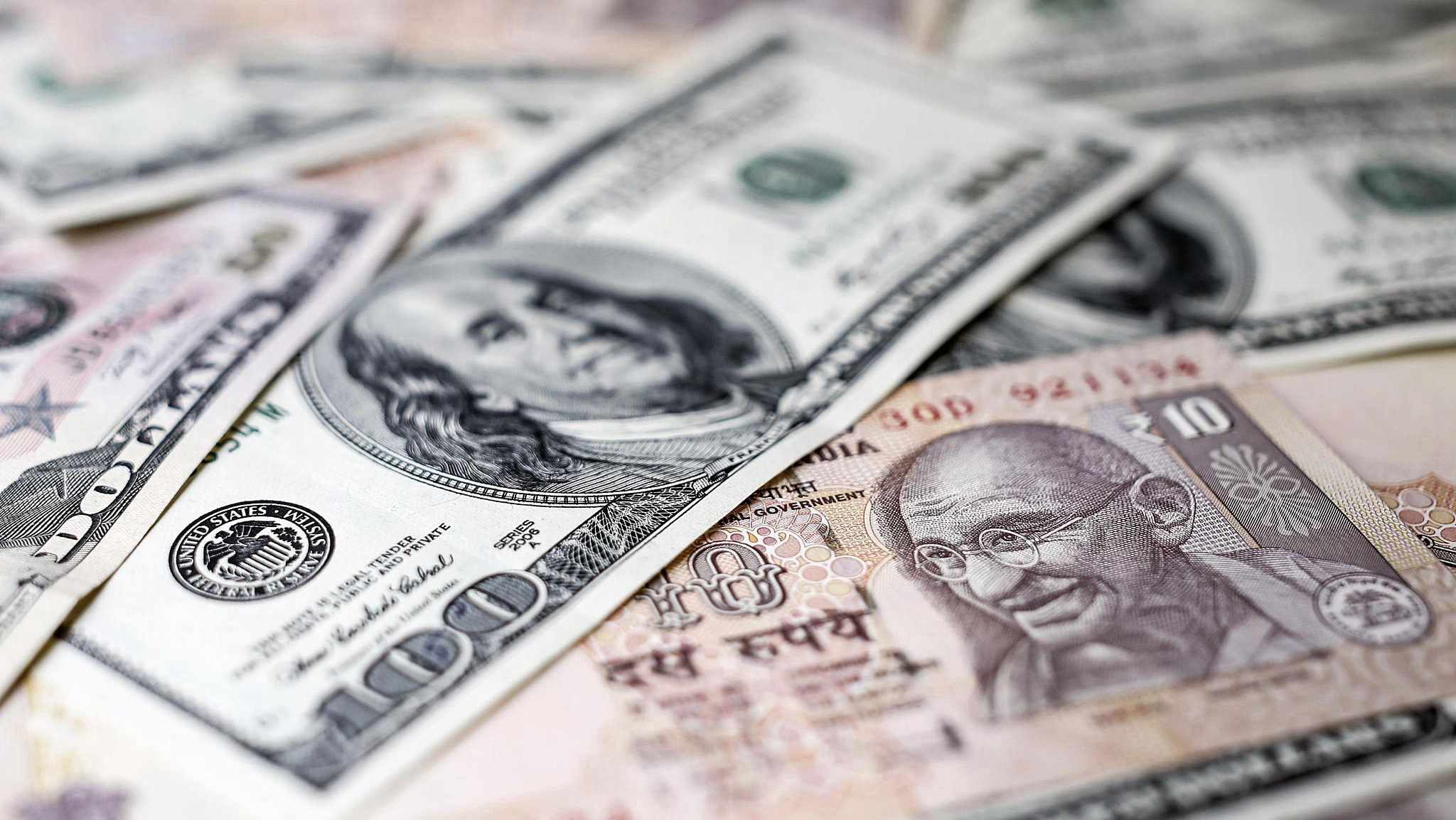 What's up with the rupee?
On Wednesday, the Indian rupee hit a new all-time low of Rs71.79 against the US dollar.
The currency, which had hovered around Rs‍68.5 per dollar till a month ago, suddenly nosedived, falling nearly four percent in a month.
Since January the rupee has lost over 10 percent of its value, with the historic fall making it Asia's worst performing currency in 2018.
India's finance minister Arun Jaitley on Wednesday said reasons for fall of rupee are global and not domestic.
Sinking rupee: The triggers
India is the third largest consumer of oil in the world. Head of Economic Research at Standard Chartered Bank Anubhuti Sahay told CGTN, "India bears the brunt whenever there's an increase in global oil prices."
Although prices remained volatile and ranged between 70 and 75 US dollars per barrel between June and August, they have risen sharply over the last few weeks, hitting 78.05 US dollars per barrel on Tuesday.
Govindraj Ethiraj, founder of IndiaSpend told CGTN "concerns over impending US sanctions are also  leading to a spike in crude prices, now more dollars are going out than what's coming in." 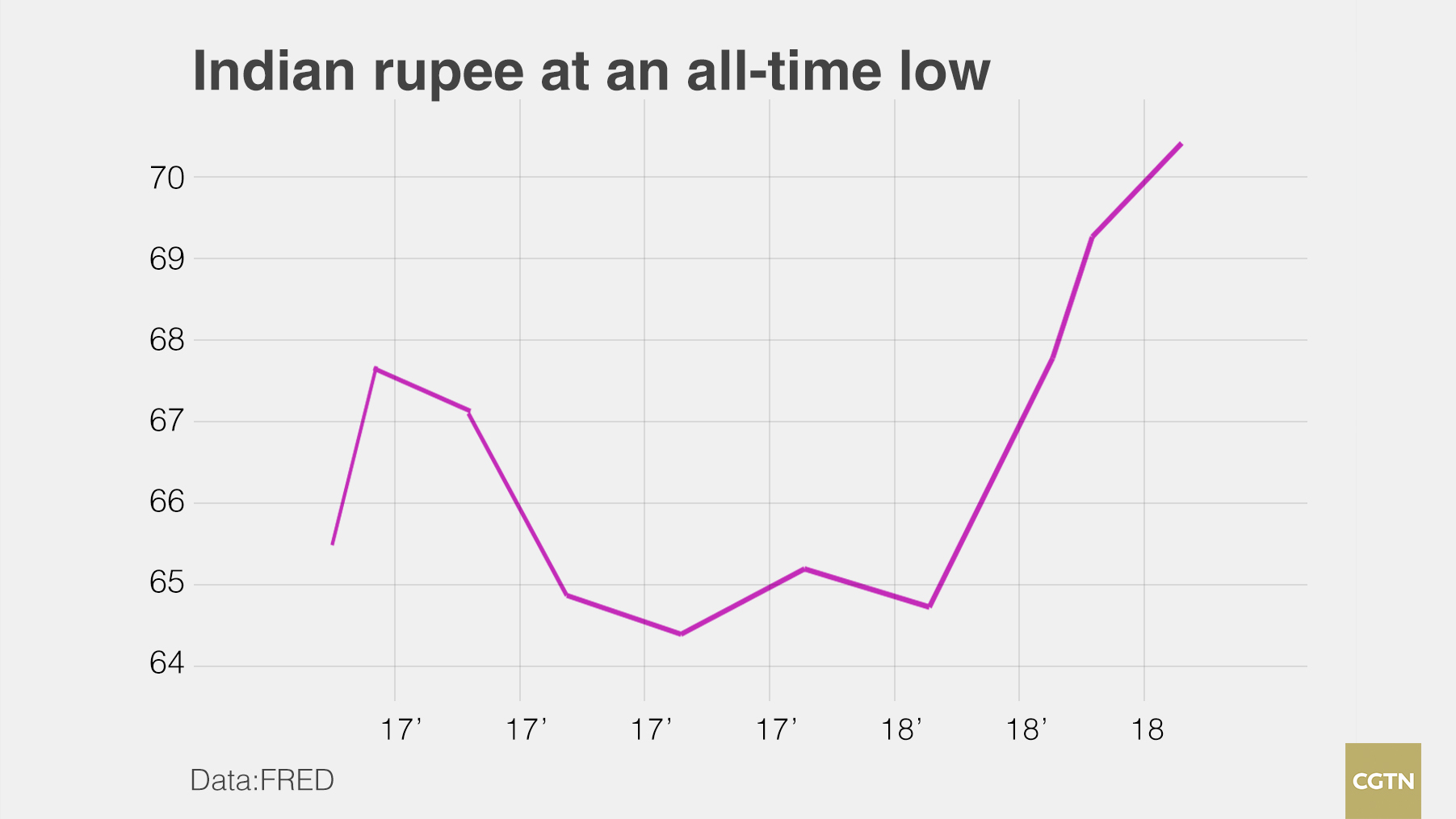 Economists fear that global trade may deteriorate due to the ongoing trade war waged by the US on its trading partners, including India.
In June, the United States hiked duties on steel and aluminum imports from India. In retaliation, India slapped increased import duties on 30 US products.
China is India's largest trading partner, with total trade between the two countries reaching 84.4 billion US dollars in 2017, according to Xinhua.
The US follows behind in second, with total trade with India at 74 billion US dollars.
"Though the direct impact of the US-China trade friction is limited on India, the impact via financial markets -- which reflects investors' confidence, can be seen with the falling rupee. Every five percent depreciation in the rupee pushes inflation by 20 basis points," said Sahay.
The US Federal Reserve is also making things difficult for the sliding rupee. In June, benchmark short-term interest rates were hiked for the second time in 2018, with the Fed also indicating two more hikes would be announced in the coming months.
This means increased liability on dollar dominated debts, capital inflows, and exchange rate appreciation. 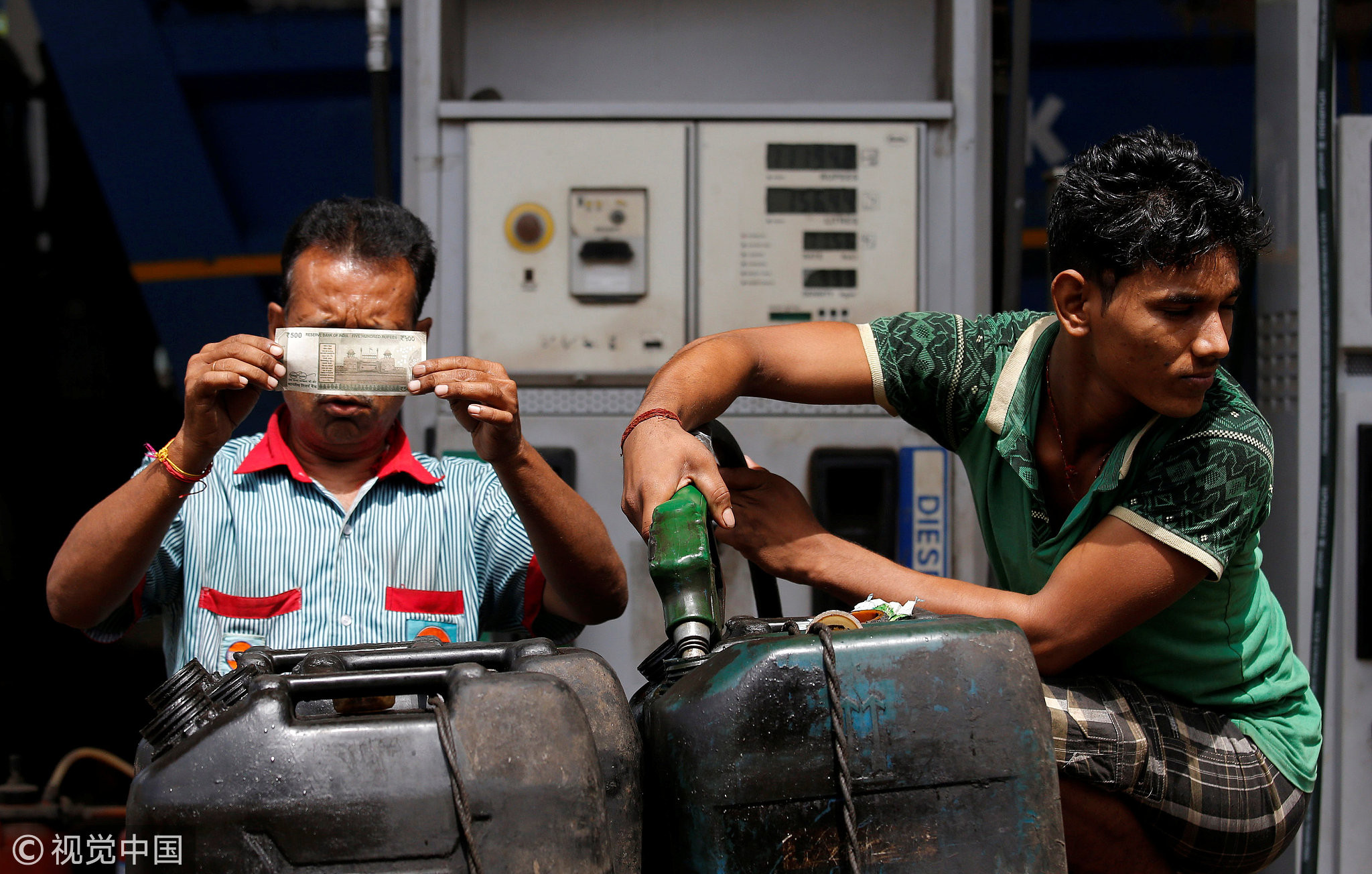 A worker checks a 500 Indian rupee note as a man fills diesel in containers at a fuel station in Kolkata, India, August 14, 2018. Rupak De Chowdhuri/File photo

A worker checks a 500 Indian rupee note as a man fills diesel in containers at a fuel station in Kolkata, India, August 14, 2018. Rupak De Chowdhuri/File photo

The worst casualty: Emerging markets
The Indian rupee is not the only currency which is depreciating.
International economics expert Pronab Sen told CGTN "as far as protectionism is concerned, it disrupts the system riding on foreign investments, and now this money is moving out of emerging markets."
The Argentine peso has shed 82 percent this year, making it the worst performer in emerging markets.
Meanwhile, the crisis-hit Turkish lira has depreciated over 77 percent so far this year. The Indonesian rupiah has slid to a 20-year-low, and data published on Tuesday showed South Africa's economy entered a recession in the first half of 2018, pushing its currency the rand down two percent. 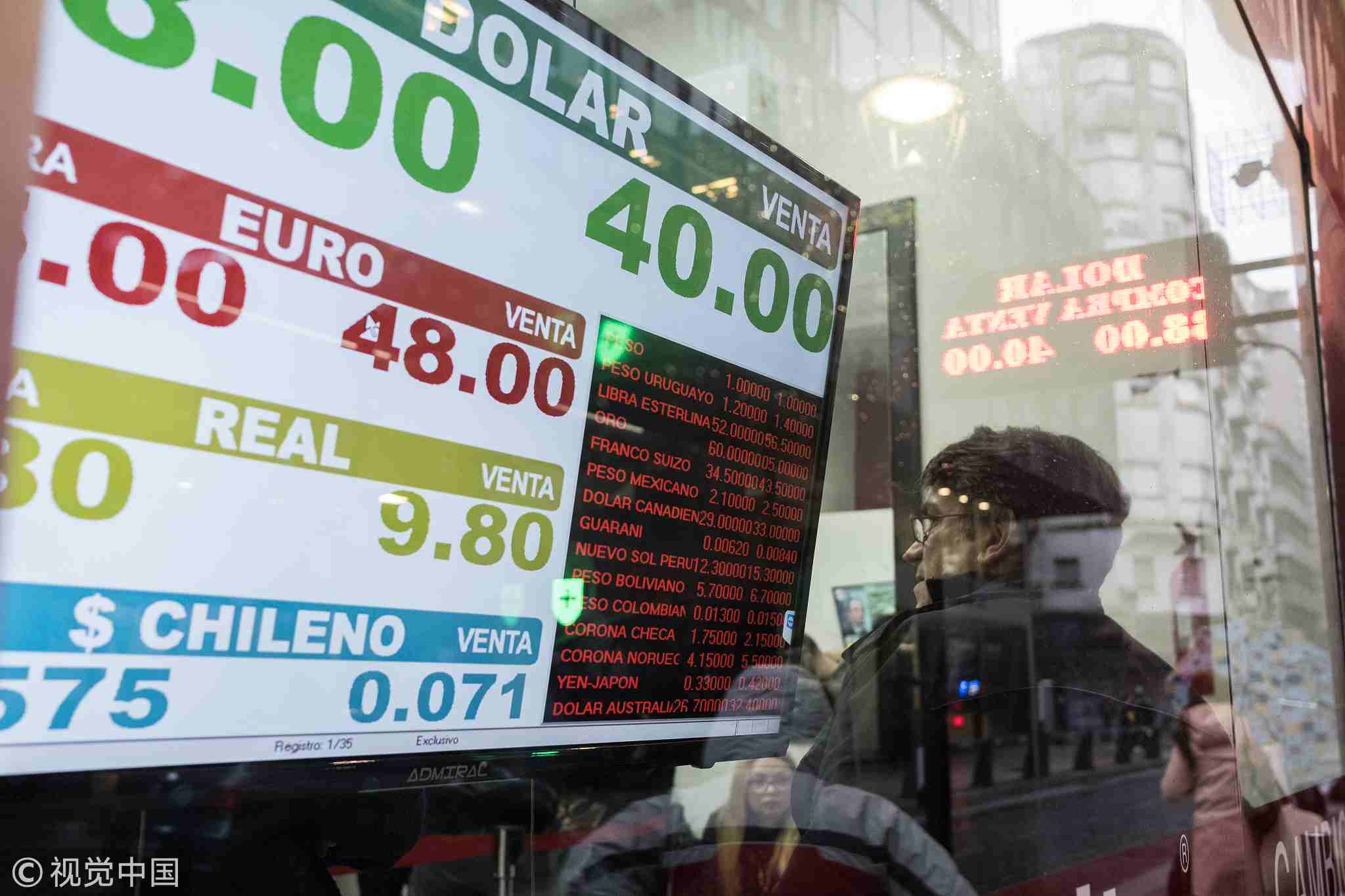 A man outside Central Bank of Argentina after announcement of hike in benchmark interest rate from previous 45% to 60%, September 1, 2018. /VCG Photo

A man outside Central Bank of Argentina after announcement of hike in benchmark interest rate from previous 45% to 60%, September 1, 2018. /VCG Photo

IMF data show that countries with weaker current account deficits have been among the hardest hit, suggesting trade concerns have been a significant factor.
A country's current account is the sum of the balance of its trade with rest of the world and other incomes from abroad. 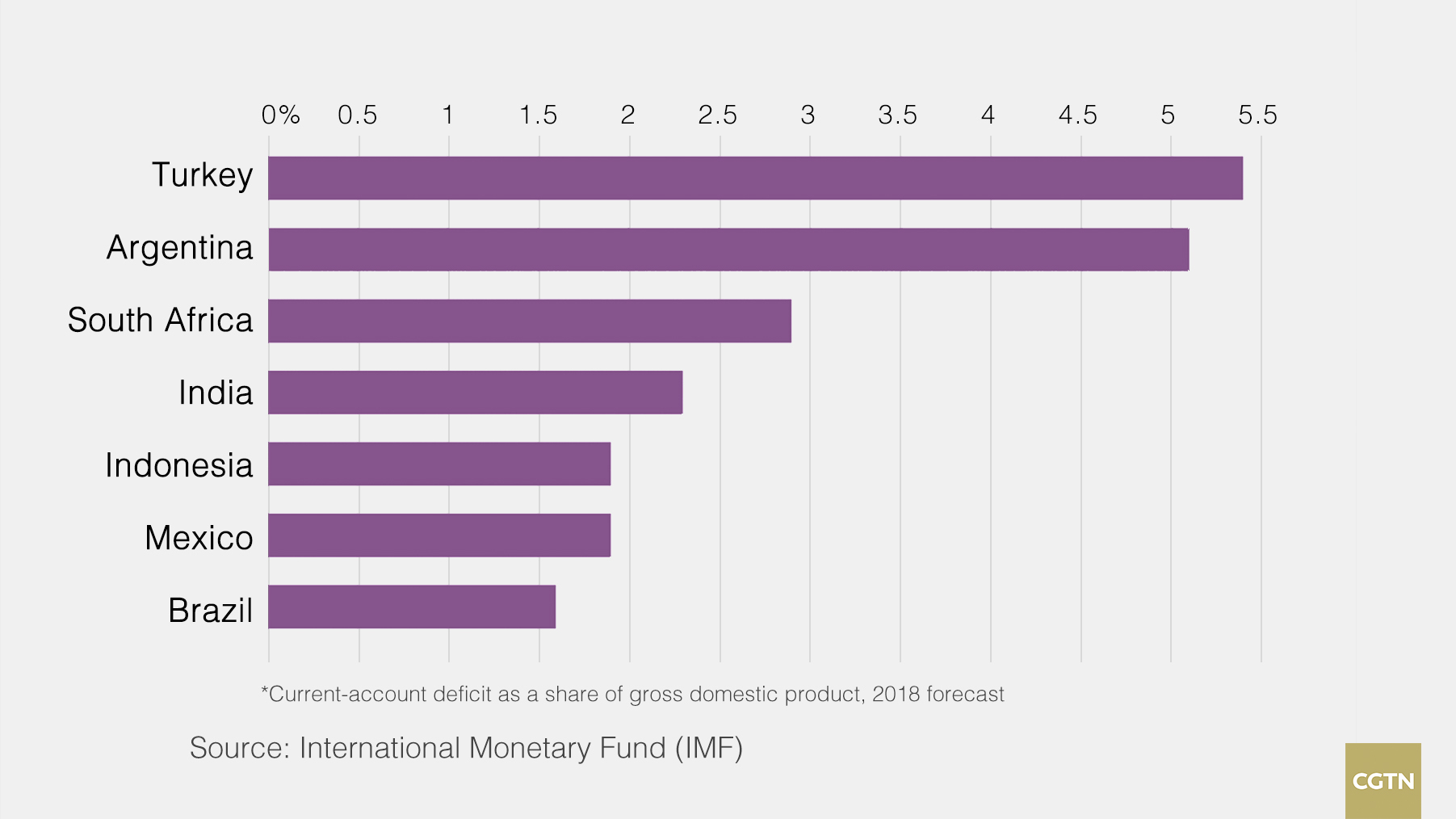 Red Alert! Why the US should worry
Hurt by a deepening economic crisis in emerging markets and concerns over escalating trade disputes between the US and rest of the world, almost all global stock markets closed in the red for a third straight day on Wednesday.
Economists have warned that the problems will spill over to other emerging markets, and possibly even further into developed economies.
According to Dan Wang, an analyst with the Economist Intelligence Unit, "US protectionism will cause more trade disputes with the EU and drive up trade cost, this will lead Europe to seeking closer ties with China and other emerging economies."
Economist Pronab Sen told CGTN that Trump's policies may soon haunt the US, explaining that "more or less every currency is going down against the dollar." 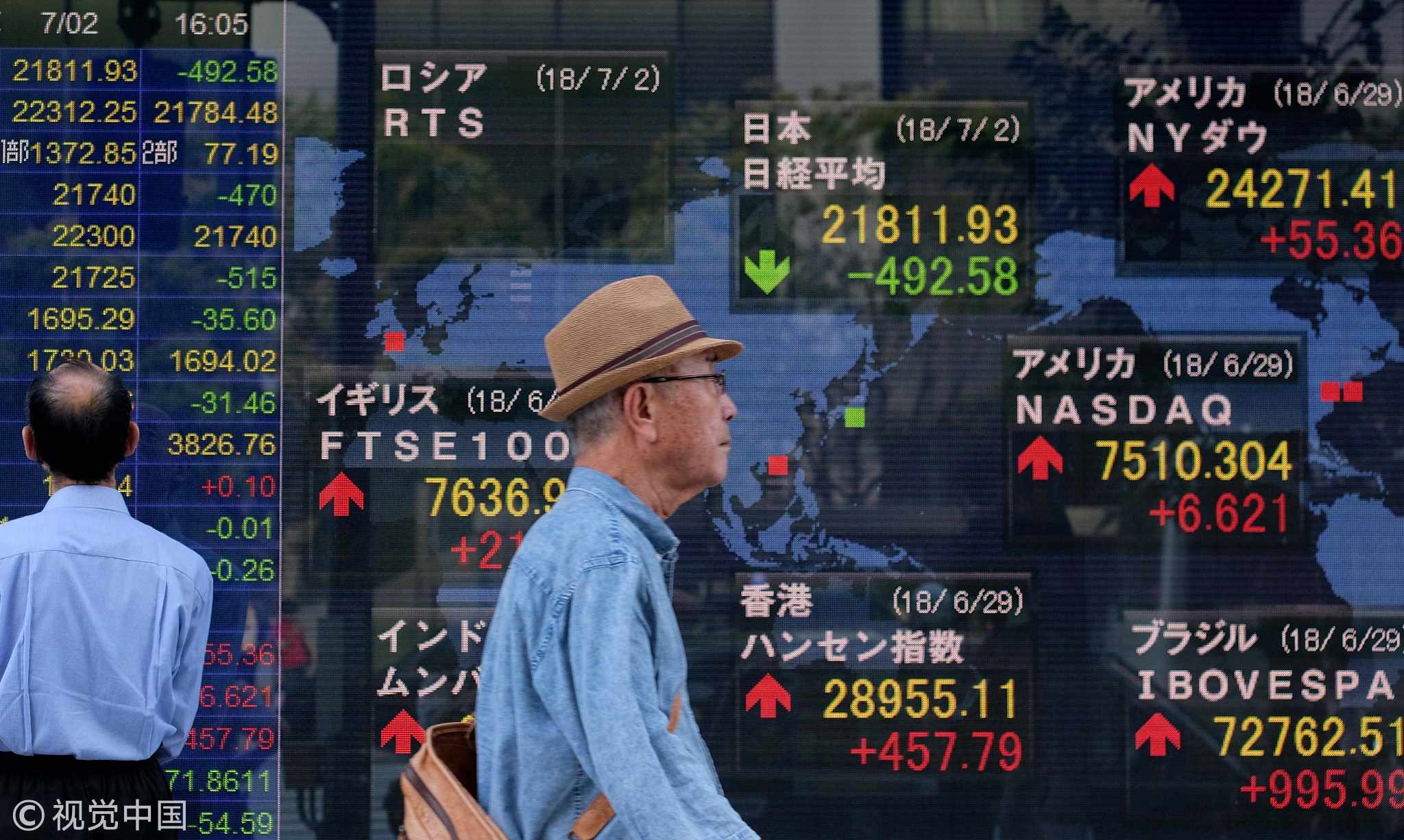 "The big question is, with the US dollar going so strong the whole idea of tariffs falls flat, if US products and services are too expensive everyone is going to explore new markets."
The US Commerce Department on Wednesday reported that the country's trade deficit has risen to a five-month high due to declining exports.