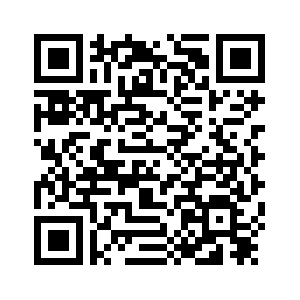 ‍Dozens of mostly elderly people from the ROK crossed into the DPRK on Monday to meet their DPRK relatives for the first time since the 1950-1953 Korean War split their families apart.
The reunions took place at the DPRK's Mount Kumgang, a scenic resort on the DPRK's east coast. It is the first time in three years a family reunion activity has been held between the two Koreas, following the historic summit between the DPRK's leader Kim Jong Un and the ROK's President Moon Jae-in earlier this year.
More than 57,000 ROK survivors are registered with the ROK government. However, only 93 families were chosen and four of whom had to pull out at the last minute due to health reasons 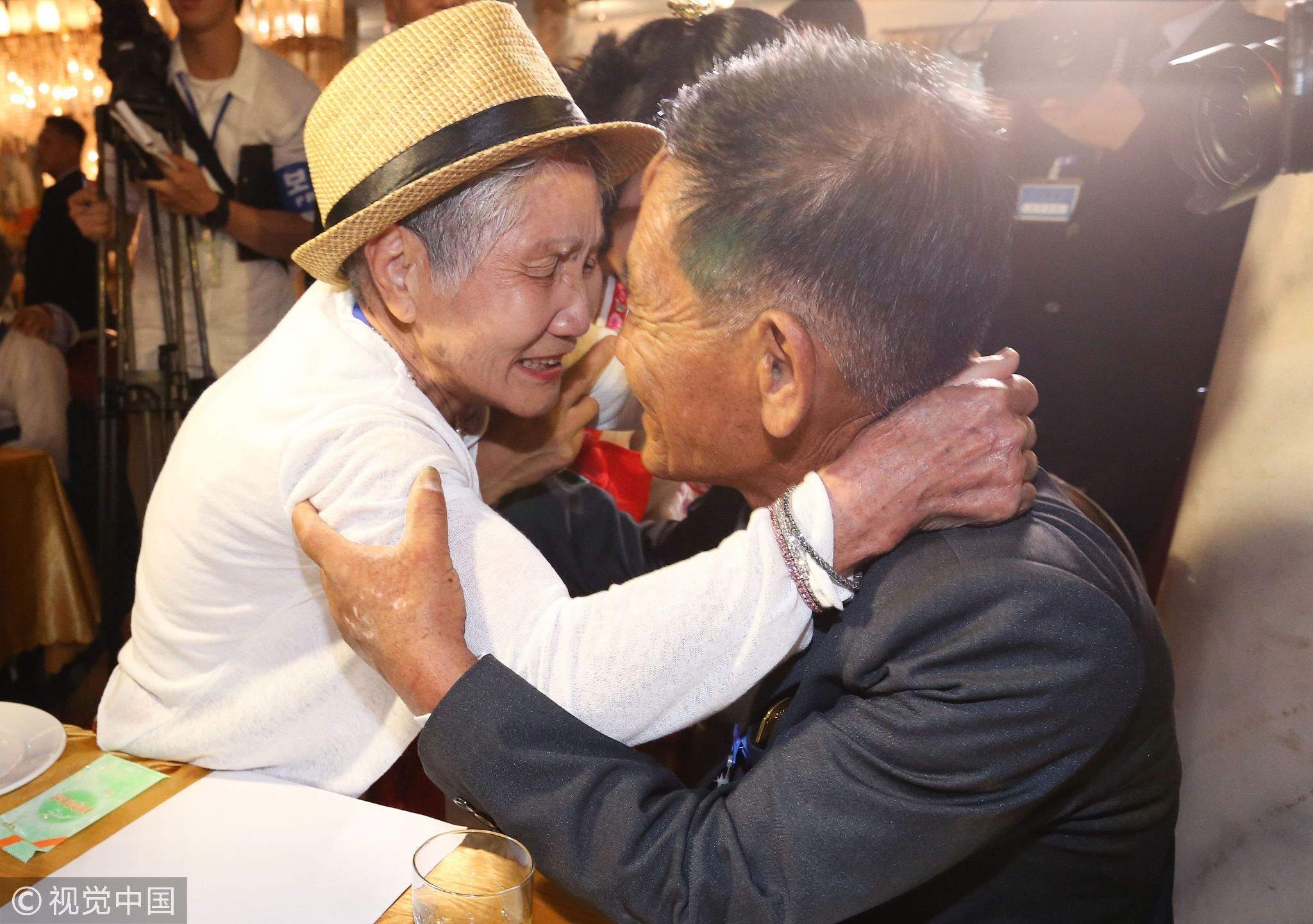 Read more:
Excitement and sorrow for families separated by Korean War
ROK Korean family reunions hinged on lottery
Korean separated families: When will I next see you
Monday's meeting, which started at around 3 p.m., is the first session of reunions. The families are to meet on six occasions for a total of 11 hours during the reunion event that will end Wednesday.
China is glad to see that reunion activities have restarted and witnessed the two Koreas actively implementing the spirit of the Inter-Korean summits' consensus and the Panmunjom Declaration, the Chinese Foreign Ministry spokesman Lu Kang said on Monday.
He said the residents in the DPRK and the ROK are of the same ethnicity and their blood is thicker than water.
China will continue to give full support to the improvement of relations between the two nations and hopes that relevant parties in the international community will give more encouragement to this issue so as to create a favorable atmosphere for consolidating the momentum of dialogue, promoting the denuclearization of the Korean Peninsula and the political settlement process, the spokesman added. 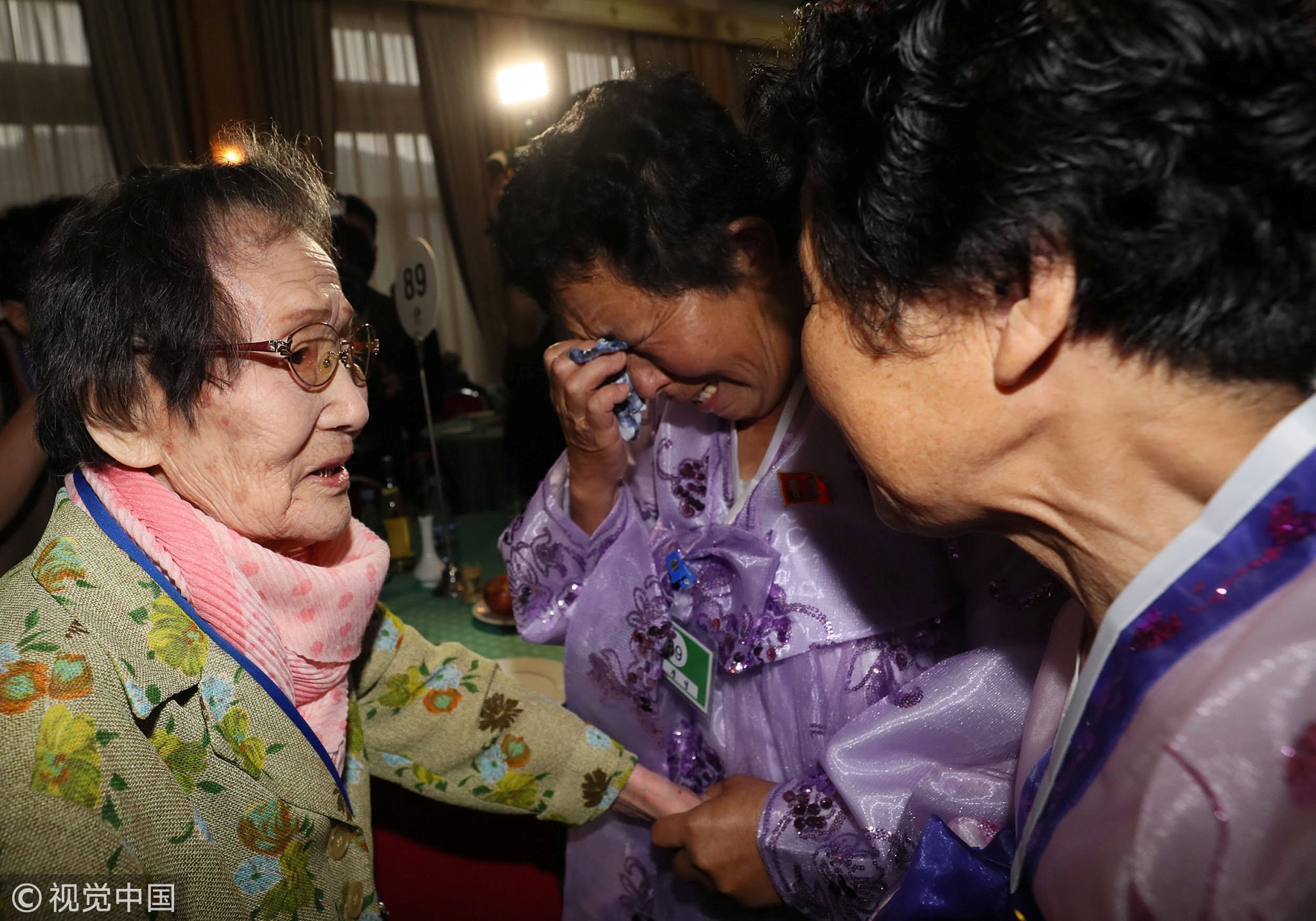 The oldest participant, an 101-year-old man told CGTN he knew the reunion would be his first and also his last time meeting his granddaughter.
He said he got everything covered including 30 pairs of shoes, winter and summer clothes, toothbrushes and toothpastes as gifts to his granddaughter so that he would not have any regrets.
This is a common sentiment among the family members during the reunion. 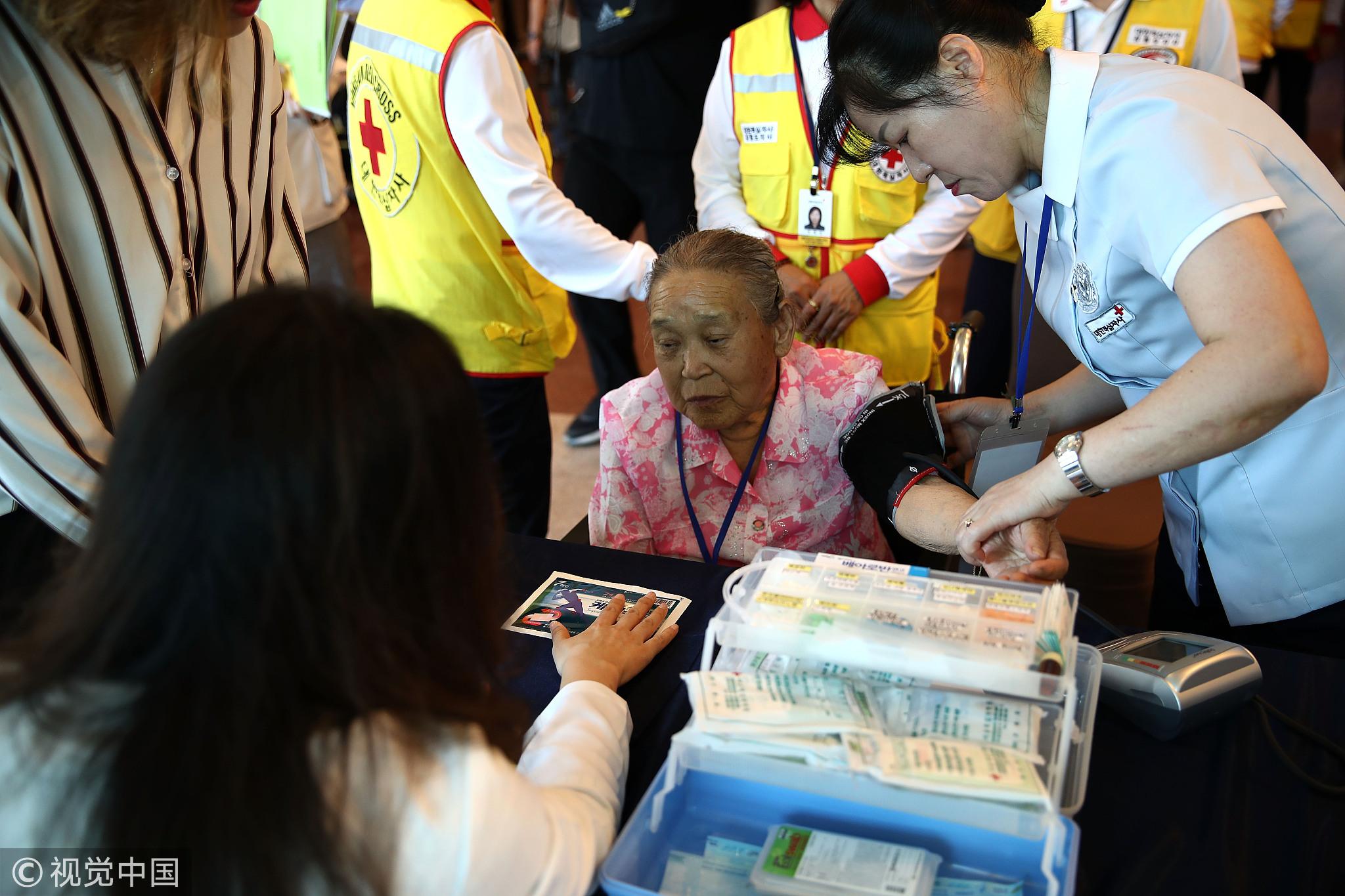 This ROK woman chose to attend a family reunion event even undergoing a medical checkup after arriving at a hotel used as a gathering point, in Sokcho, ROK, on August 19, 2018 . /VCG Photo

This ROK woman chose to attend a family reunion event even undergoing a medical checkup after arriving at a hotel used as a gathering point, in Sokcho, ROK, on August 19, 2018 . /VCG Photo

For those lucky 89 ROK chosen individuals, they are mostly in their 70s and older. They left for the venue in buses early in the morning from Sokcho, a town in the northeastern area of the ROK, where they spent the night.
On Sunday when arriving at Sokcho, participants were applauded by Red Cross workers. They then registered their names and were invited to take a professional family photo in a corner of the lobby. It was then framed for them so they could then take it to the DPRK as a gift.
Although some were so frail that they needed wheelchairs or accompanying family members had to help them board the bus, many of them still waited in the hotel lobby way ahead of the scheduled departure time.
The government has dispatched around 30 medical staff to the venue to brace for any emergency cases among the participants.
The first session is to be followed by their meeting again at a dinner hosted by the DPRK's side. 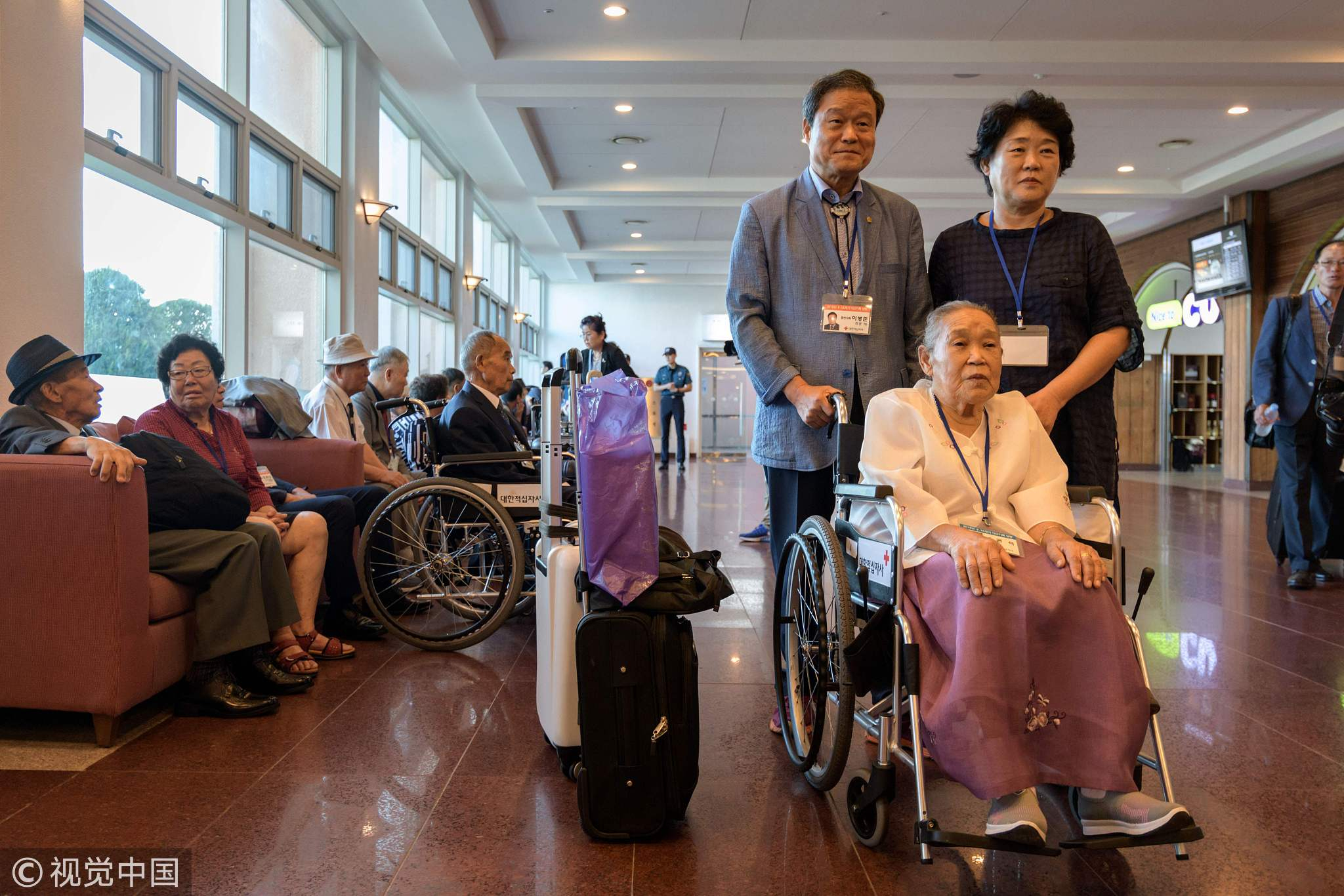 Inter-Korean family reunion participants prepare to depart for the DPRK from a hotel resort in Sokcho on August 20, 2018. /VCG Photo

Inter-Korean family reunion participants prepare to depart for the DPRK from a hotel resort in Sokcho on August 20, 2018. /VCG Photo

On their second day, they are scheduled to meet in the morning and have lunch together in their rooms, the first time for separated families to have such a private meeting since the reunion event started.

No end to heartache

Even though these 89 people are happy they can meet their family members, they will soon have to say goodbye one more time on Wednesday.
As many participants are elderly, reunions between parents and sons and daughters are rare. Most cases are meetings among cousins, nieces or nephews. 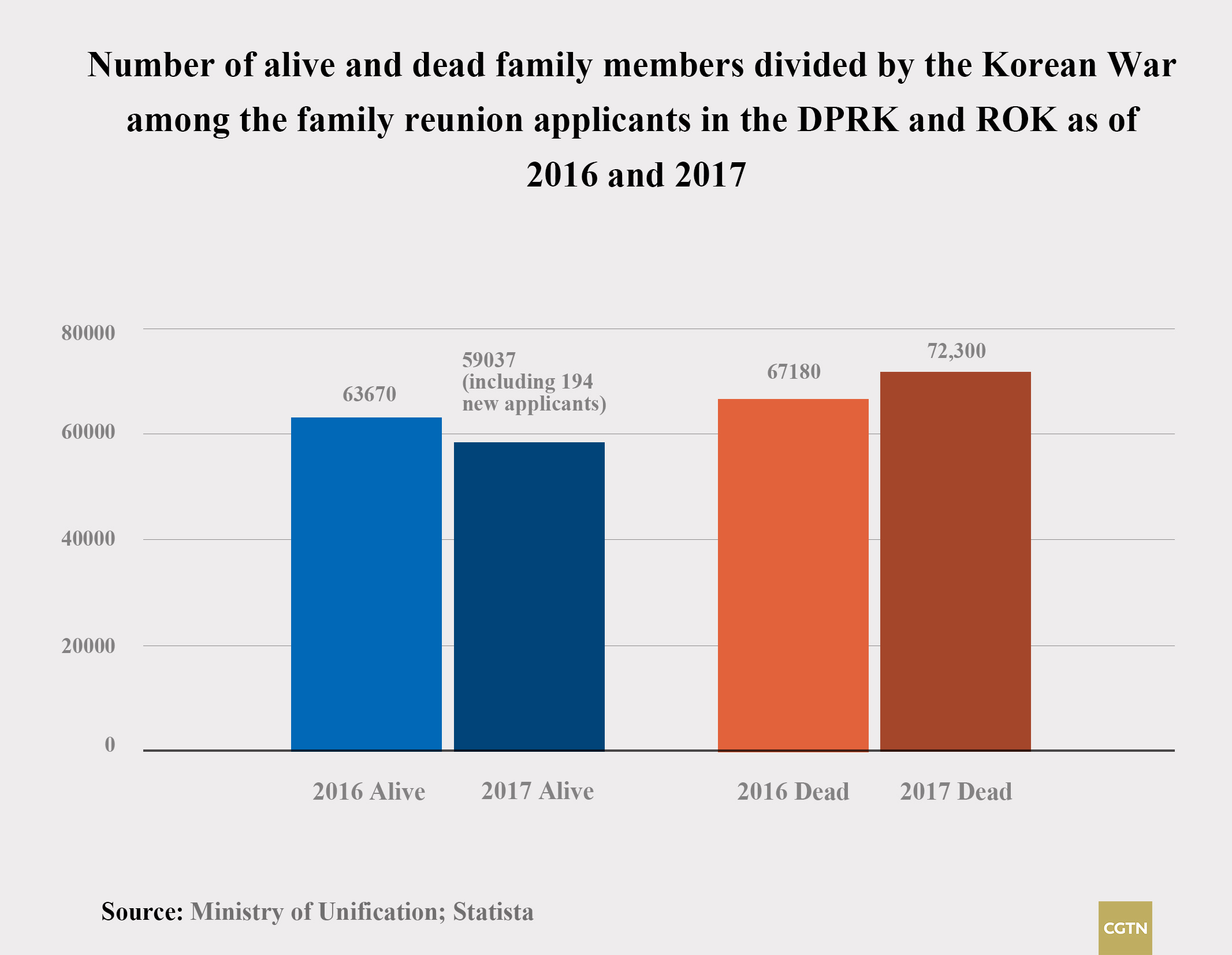 Meanwhile, less than 24,000 Koreans have had meetings together - some 19,770 in person and the others by video.
More than 130,000 ROK people signed up originally, most of whom have since died without seeing their separated family members. Nearly 43 percent of the survivors are currently over 80.
In subsequent reunions planned to take place from Friday to Sunday, 83 people from the DPRK will also meet family members found to be alive in the ROK. 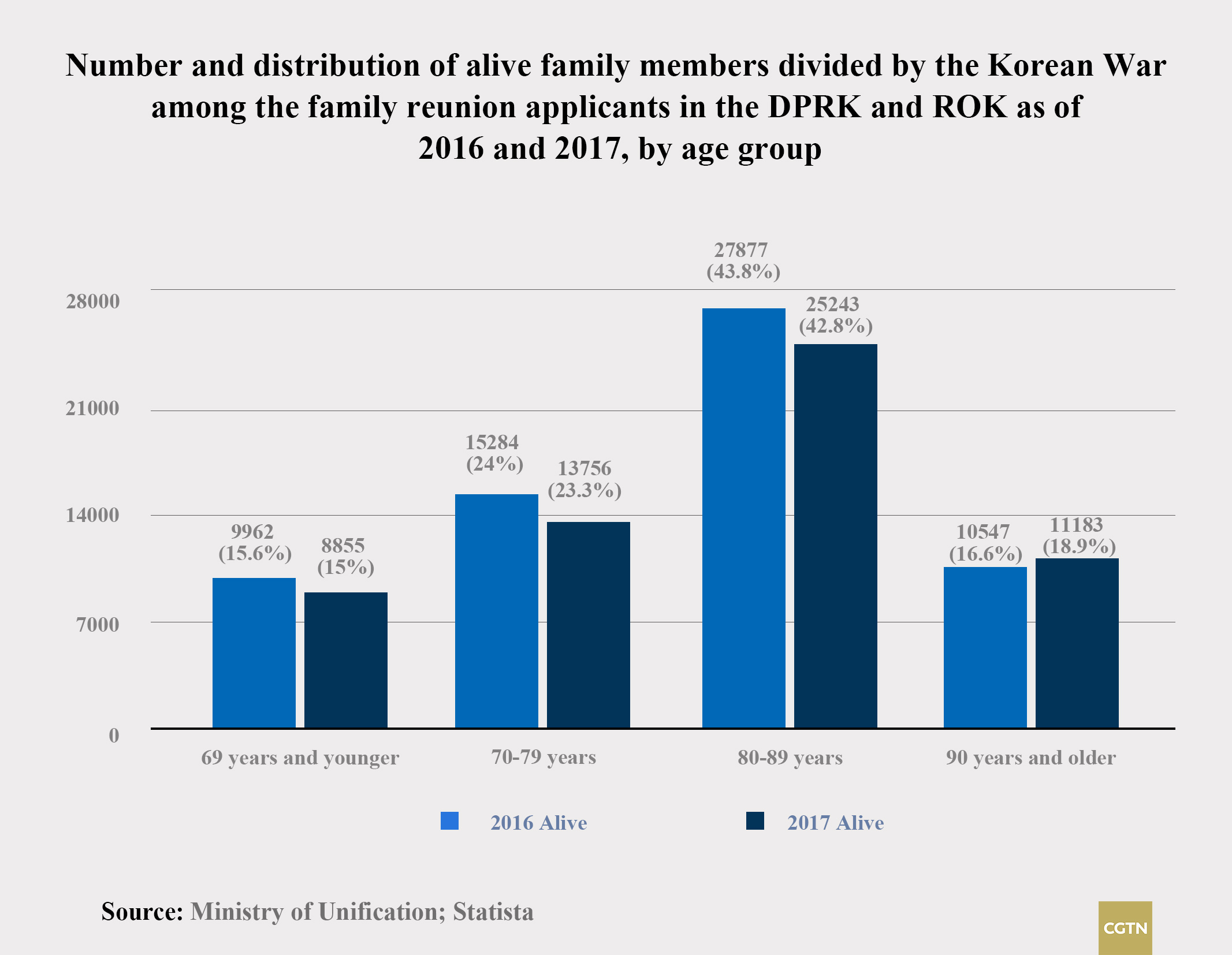 Indicator of situation on the Korean Peninsula

To many observers, the reunions of separated families have become an indicator of the political situation on the Korean Peninsula.
The first such reunion happened on Aug. 15, 2000, while Kim Dae-jung served as the ROK's president. Family members living in the two countries met a total of five times during Kim's time in office.
Under his successor, Roh Moo-hyun, the number of reunions reached a historic high, with the two sides arranging 11 such meetings.
00:48 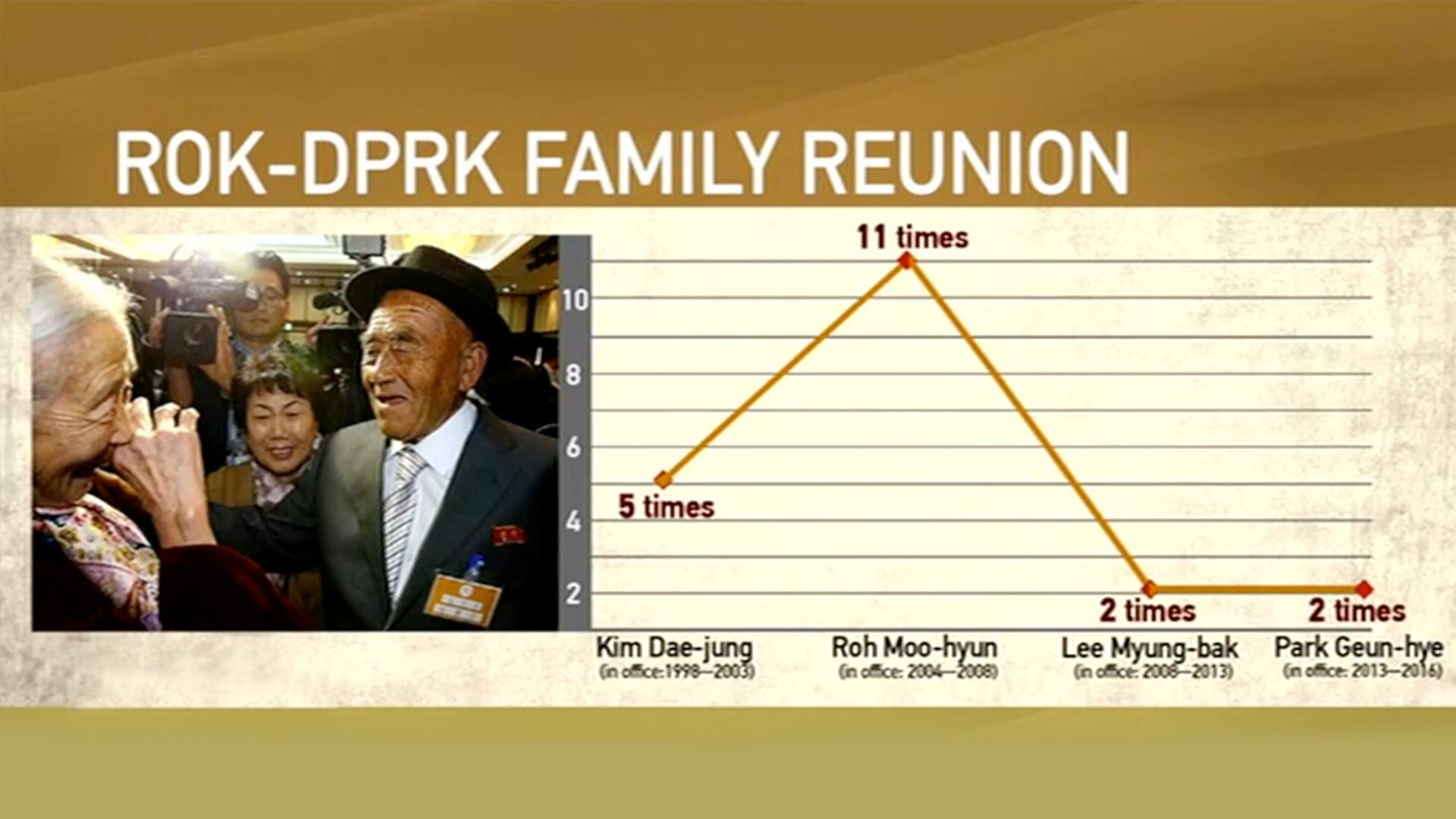 But things took a sudden turn after Lee Myung-bak was sworn in. Only two reunions took place during his presidency, which was the same as Park Geun-hye's term.
(CGTN's Zhou Wenjia, Wang Hao also contributed to the story.)